I found this horse’s sale ad and hesitated about sending it to my husband. She just looked too much like Shasta.

He’s very attached to Shasta and at various stages of the horse shopping adventure has stopped to ask me if I think maybe he can just keep riding Shasta. I told him from the beginning that I think he should get a horse that doesn’t look or act like Shasta or otherwise he’ll spend every interaction with that horse comparing it to Shasta.

And I was right, because he wanted this horse regardless of potential issues. I made the mistake of putting my husband in charge of talking to the seller. I was getting a little burned out on talking to people on the phone so I figured he could do this one. I told him to make sure he asked if anything was wrong with the horse, why is it for sale, etc. So he talked to the seller and scheduled an appointment for Saturday.

Then, as we’re driving to our 3:30 appointment, the seller texts to say she’s scheduled the farrier for 4:15 so that way we can see the horse move before and after the farrier. And I’m like, uh what’s wrong with this horse’s feet? And my husband says she has a minor club foot. Wait, what?! Ugh, I was not aware of this. My husband actually did a lot of his early riding on a club-footed lesson horse so he didn’t realize it was a problem. I know some horses do fine with a club foot. And in some brief internet searching, it does seem like some people have done endurance with club-footed horses, but it’s not easy and a lot of the commenters said they’d done it before but would never want to do it again.

Anyway, we were already on our way, so I figured we might as well go look at her. We arrived and the foot looked pretty bad. Of course she was shod and her feet were overdue. The farrier arrived, cut a lot of long toe off, rolled the toe, and really got her to a much better place. 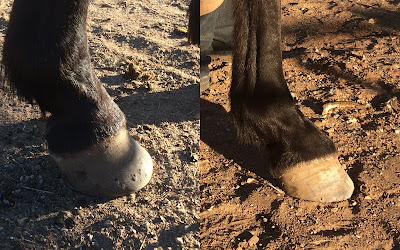 However, her movement at the trot wasn’t much improved. I actually don’t think she’s lame, just short-strided on the one leg and therefore looks uneven. 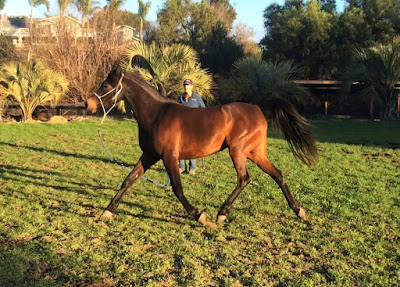 So here’s the weird thing. When we finished lunging her, we were standing around talking and watching her graze. 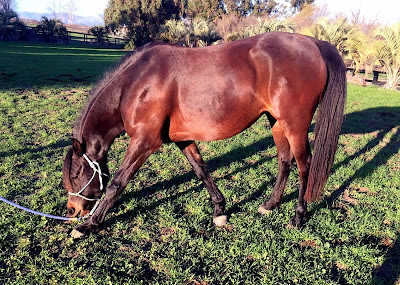 And this is how she stands. Always. Like she will not put the right leg in front. And if she needed to move a step forward to reach new grass, she’d take this little crippled step with the right, practically fall down, and hurl the left leg forward again. You can see how this position really emphasizes the club foot thing. 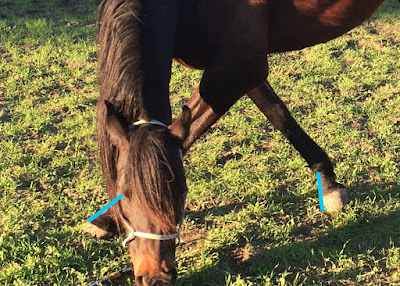 And I started wondering if this is a chicken or the egg sort of thing? Like did the club foot create this or does grazing like this all the time create the club foot. I know club foots are formed at birth or in the first year, but I do wonder if this behavior hasn’t made it worse. And it’s not just the hoof that’s out of whack at this point. This stance has changed the musculature in her shoulders as well. 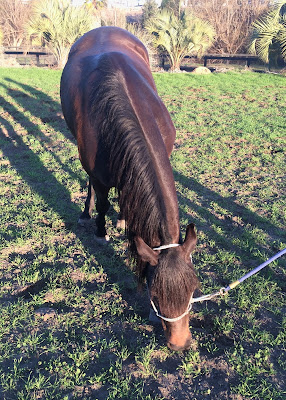 She doesn’t look this deformed when standing straight, but you can see how awkward this position is and how it puts unnecessary strain on muscles. I do wonder if forcing this horse to eat upright (hay nets, hobbles, who knows) might help her club-foot. The seller (who is a paid trainer, not the owner) decided after meeting with us and my pointing put the severity of this behavior that she needed to get the owner to do X-rays and see if there have been bone changes inside the foot. The price the owner wants for her is only warranted if she can be competitively sound. Right now she’s only slightly off so she’d be fine as a light trail horse or breeding stock, but the price would need to change.

It’s a shame too as this is a really nice horse outside of the foot issue. She’s well-behaved and trained, really sweet and friendly, and very pretty.