On Saturday, we drove out to see two horses. It was supposed to be three, but we had to cancel the one appointment when the sales barn demanded we get there before 11am. We had volunteered to do morning feeding at the barn and then had a long drive, so that wasn’t going to happen.

The first horse we looked at was a cute little chestnut Arabian. He’s 5 years old and just started under saddle so very green. He was a bit standoffish in the ties before the ride and had some swellings beneath his withers which looked to be from a poorly fitting saddle. This was confirmed when it was put on. Poor boy. He was actually very well behaved about it, but it did not fit and I felt bad for him.

The assistant trainer lunged him and then rode him first for us. Sound, spry, energetic, but not crazy. He did threaten to pitch a fit when he assistant trainer first got on him, but the guy rode him excellently and he settled down. He’s a baby and he had a saddle that didn’t fit on him so I wasn’t worried about antics. My husband got on and rode him around next. I made him wear my vest just in case, but he was very good. 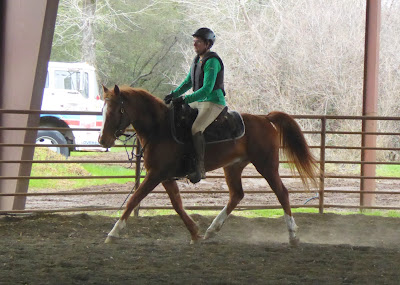 Very green, but very good. He was a bit sticky to get moving and he really threw himself into downward transitions. But he’s just been started under saddle. He had comfortable gaits and seemed generally willing. My husband had some difficulty getting him to pick up his left lead, but again, he’s green, I didn’t blame him. 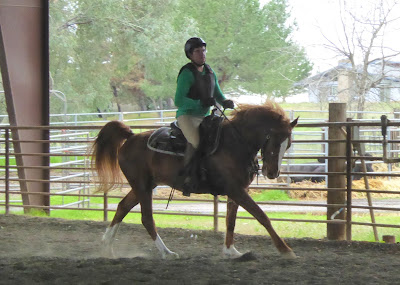 The lighting was pretty crappy in the covered arena since it was raining and gray outside so the pictures aren’t great. After my husband rode, I hopped on. 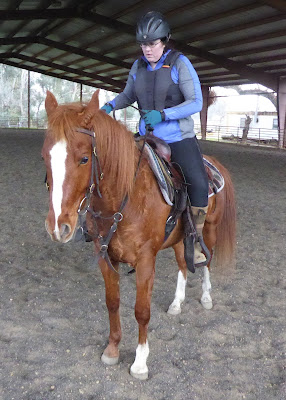 He was a bit gate sour with me which I find surprising in such a young horse – and concerning. But once I got him moving he was good. I also got him to canter on the left lead, so he knows his cues, but my husband is a less experienced rider. My husband is a confident and great rider. He will do lengthy trail rides over hills with trotting and cantering bareback. He can jump Shasta 3′ with and without a saddle. He can stick bucking and deal with all sorts of crap, but he went from school lessons to riding Shasta. And Shasta is very well trained. She spoils him and lets him get away with not being a very educated rider. He’s actually expressed interest in doing some dressage lessons to get better after watching me these last few months. His lack of fine skills comes out in stuff like this though: asking baby horses to get the correct lead. The next horse was a bay 12 year old Anglo-Arab. He also had swellings below his withers. He was also a bit thin. Not neglected thin, just thoroughbred sort of thin. I could see him taking a lot of extra calories to keep in weight. Endurance horses need to hold their weight and eat like it’s their job. I had an OTTB for a year and keeping weight on her was always a PITA. So I was a bit concerned.

Same pattern: lunge then the trainer rode him first. He was very, very excited about going as fast as possible. Like making roaring noises, snorting, and also doing this bitey face like he was really pissed. Which I suppose could be the saddle. Or it’s just him. He was up. The trainer even hopped off and switched him to a stronger bit. Which, honestly, was just a thinner snaffle, not a twisted or curb bit or anything really severe.

He was rideable, but jigged instead of walking and really kept trying to canter. And once you let him canter, he’d want to race. My husband had to do a lot of circles to keep him in line. He was very well trained though. Like at one point my husband was changing directions and over applied leg and he went right into a really lovely leg yield with nice cross over. I told my husband to do turn on the for and turn on the hind quarters. He was quite good. He was actually a hunter horse before the sales barn so it’s not surprising he’s well trained. He just didn’t do well in the flat classes because he was too excited.

One thing I really liked about him was his natural inclination to step under himself. He was much too on his forehand, but I attribute that to being in the Arabian horse showing world where the english classes look a lot of like AQHA english classes: downhill, but with more animated/lifted legs. Plus he’s been at a western barn doing western so the carriage is explainable. He’d need to learn to sit back a bit, but he’s already got great leg movement. I think he could be transitioned to dressage pretty easily. He’d be a nightmare for free walk, but my husband only want to get through dressage to get to the fun of cross country, so that’s ok.

Speaking of movement, this horse has a HUGE extended trot. He just flies around looking like a harness racer. And it’s smooth and comfortable to ride.

This is the sort of trot you want in an endurance horse. And the desire to go forward is also pretty essential. He’s also cheap and likely negotiable because he’s so hot I don’t know that anyone else will want him. We like crazy and I always prefer a pull ride. Plus he’s barefoot and has decent feet.

However, he’s 12 which is older than we want. If we were lucky, we might get 4 more years of endurance out of him. We already own a bunch of teenage horses and don’t particularly want anymore. I also think he’s a bit over at the knee. I forgot to take any conformation shots, but here’s a clip from his sale picture below. You can also see it in the above trotting picture if you look at the right front. 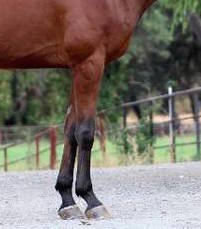 Here’s the thing. If the second horse was younger, we’d probably be seriously considering him. My husband enjoyed riding him. We may actually go back with an english saddle and try jumping him. We have to drive back out there to look at a different horse anyway. If the first horse was not a chestnut, we might be considering him. I know, I know: color shouldn’t matter, but it does. Neither of us likes chestnuts. We could overlook it if the horse was amazing, but he was just good, not omg good.