My husband and I planned to do some jumping in between Training 1 and 2. Unfortunately the jumpers ring was already up at 1.00 meters after our first test, so we checked in on the hunters ring. They were just finishing up the 2’3″ class and about to start 2’6″. Perfect. I signed up for 2’6″ warm up and 2’6 hunters. My husband signed up for warm up and Eq.

In the warm up ring, we hopped over a few jumps that were set around 2′ and then I wanted to do the one bigger oxer in prep for the class. We came around, Levi tried to brake, didn’t have enough time to fully stop, awkwardly tried to hop from a standstill and clobbered the whole thing into the ground. Sadly, there were no pictures of this brilliance. We came back, knocked it down again – because we are so good at this – and I decided to take him back over the smaller jumps, get him back in the game, and then return to the big oxer. We finally got over it with a massive overjump and I called that good.

Back in hunterland, I checked in at the gate where they were still not done with 2’3″ even thought it had been almost 30 minutes since we asked and were told it was almost done. I asked if they were going to drag between divisions and explained I had another dressage test to get to. No one else had put themselves in for order of go so I was told I could go first and there would be no drag, just raising the fences. Great.

Except this is hunterland and everything takes a million years and time means nothing. The jumps were eventually raised, but then we were informed we had to wait for the judge to get back because warm up is a judged class. One of the girls from our barn had come out to watch for a bit and asked why warm up was judged and I was like, I have no clue. I honestly don’t understand how hunters works. I’m not bashing hunters. If you like hunters, have fun. Everyone should do whatever makes them happy. I just don’t understand it.

While we were waiting for the judge I was complaining that the jumps were still really low and no where near 2’6″. My husband, who hadn’t been paying attention said they hadn’t raised them yet. Umm no. They already did. At this point most of the jumps were 2’ish with the biggest one being maybe 2’3″. I get that it’s a schooling show, but how does jumping things that are only 2′ prepare you for jumping 2’6″ at an actual show? If we’d had time, I probably would have switched to 2’9″ or 3′ and hoped for 2’6″ jumps.

The judge finally returned and the gate girl proceeded to call 3 other people to go before me. Because telling me I could go first apparently meant 4th. Eventually, I got called to do my first round. We went in to go to the first jump and Levi said nope. 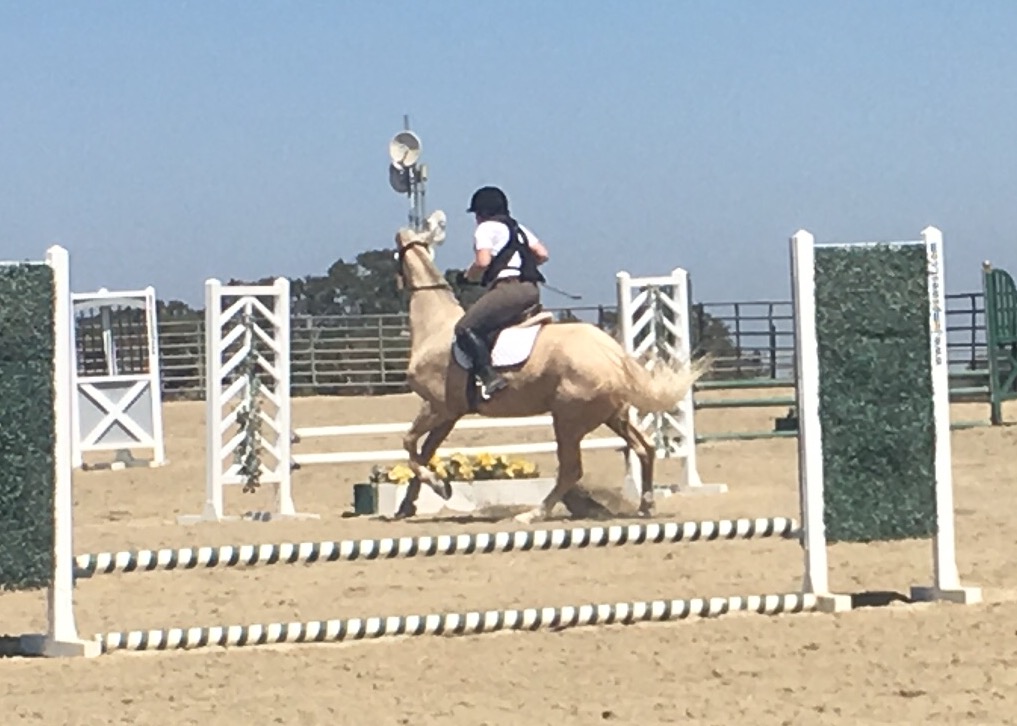 Much beating later, we circled around and awkwardly hurled ourselves over it. 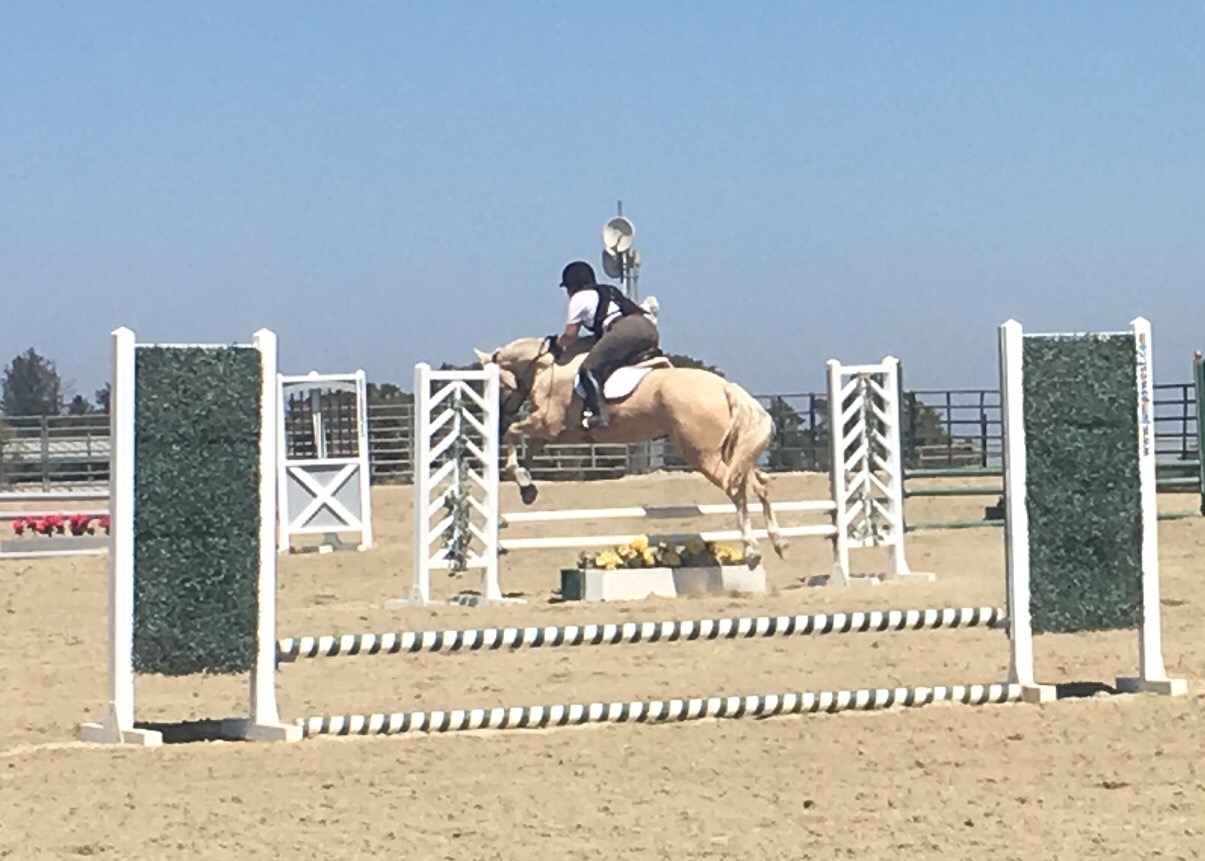 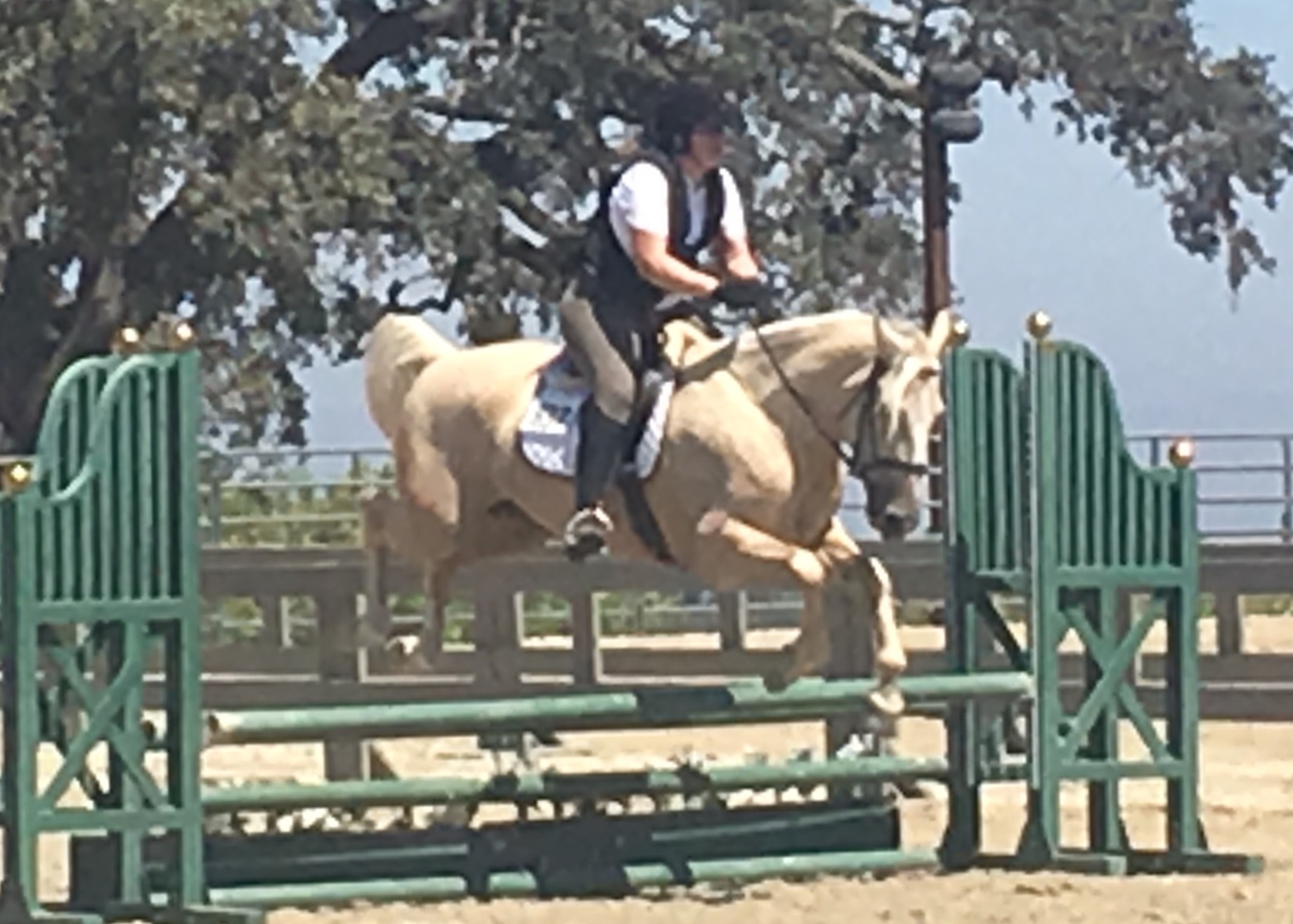 Levi was still trying to refuse at #4, but I pushed him forward and we got over it, albeit awkwardly. 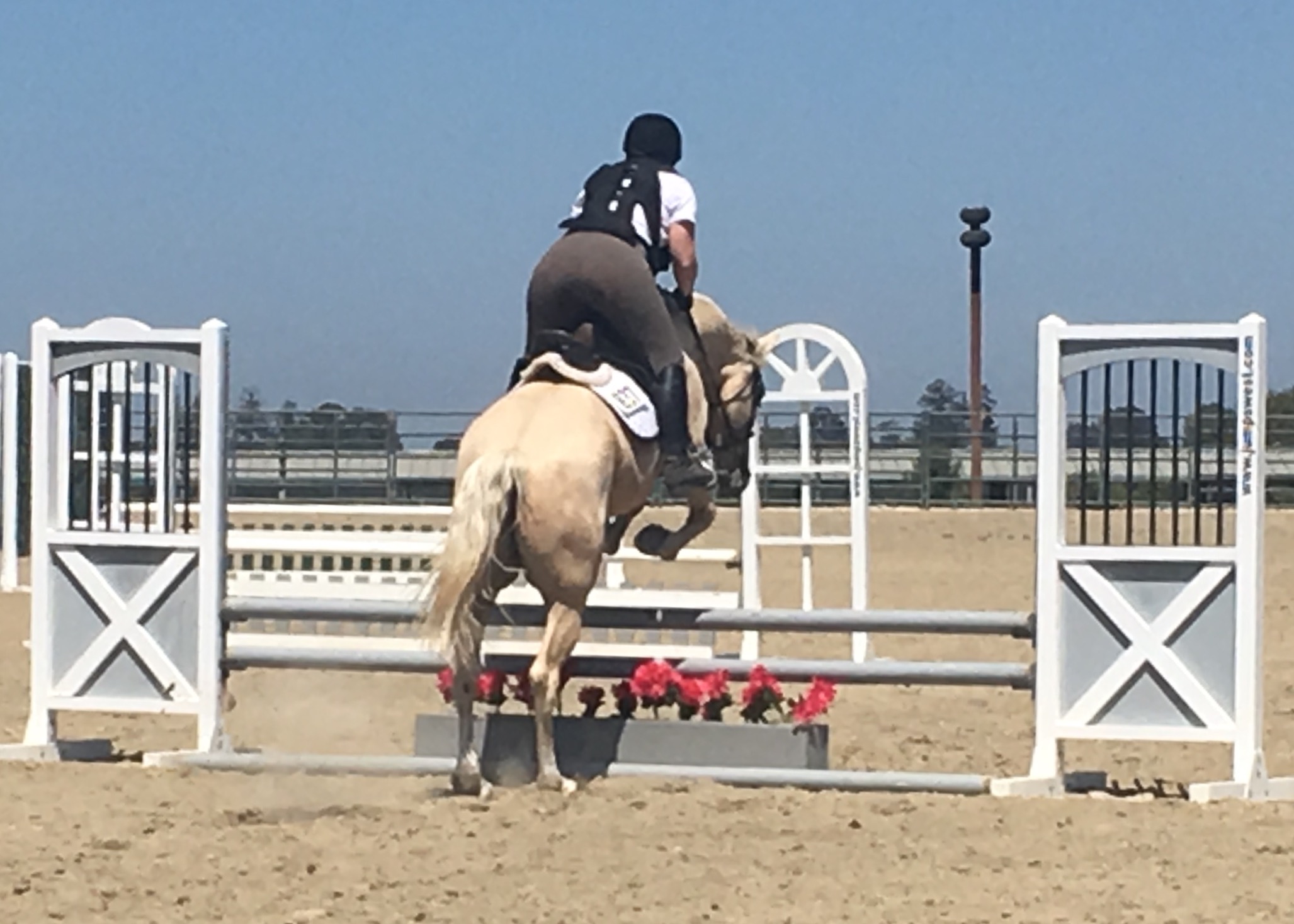 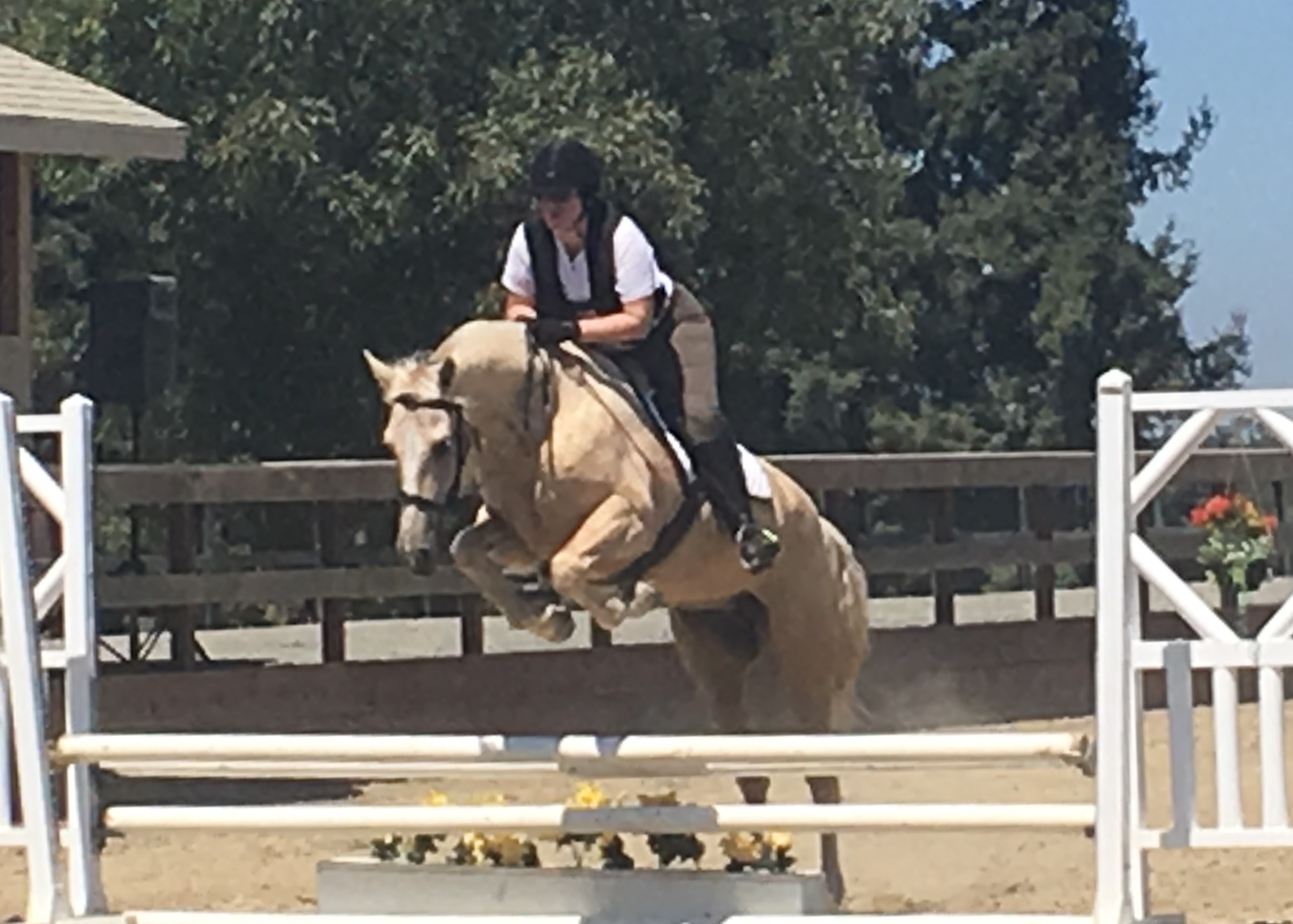 We somehow managed to get 3rd out of 6 for this warm up. One girl fell off so I know how I was ahead of her, but I’m still not sure how I got 3rd. I’m actually pretty confused because my husband got 4th and they only had 1 rail. I thought a refusal would be worse than a rail. But again, I don’t know how hunters works. Didn’t matter though. We were just there for the exposure. Ribbons are a just a (enjoyable and appreciated) side effect.

When I left the ring from my warm up round, I told the gate girl I needed to go do my dressage test and I’d be back. She tried to give me attitude about how they were going to end the class in 20 minutes and I needed to make sure I was back. I wanted to say a lot of things. Like how I asked to go first and signed up before everyone else and told you I had a dressage test a long time ago. Or how I know that this show never closes a class before everyone who is signed up gets to go regardless of how late or missing or obnoxious to everyone else they’re being. I have listened to announcements go over the loud speaker for 30 minutes looking for missing entrants. But I didn’t say those things. I just politely said I’d be back and went and did dressage.

Back in hunterland for our second round. Levi was a little looky, but much less sticky to the jumps. I really wish we had an actual camera with us and not just a cell phone, because how cute is he over the first fence? 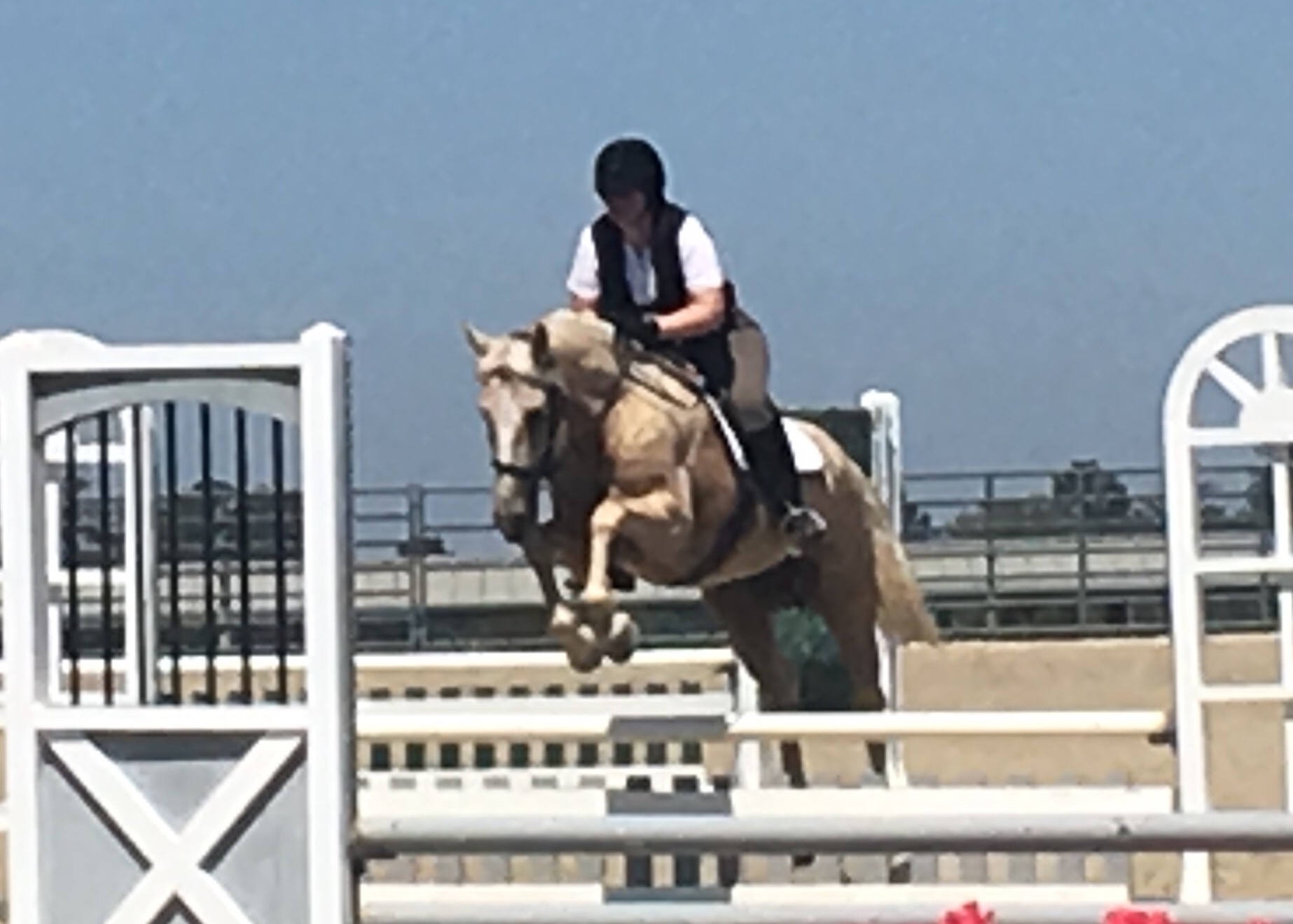 We didn’t hit a great stride into the first jump of the first line which carried through to the second jump, but at least my hands are down. 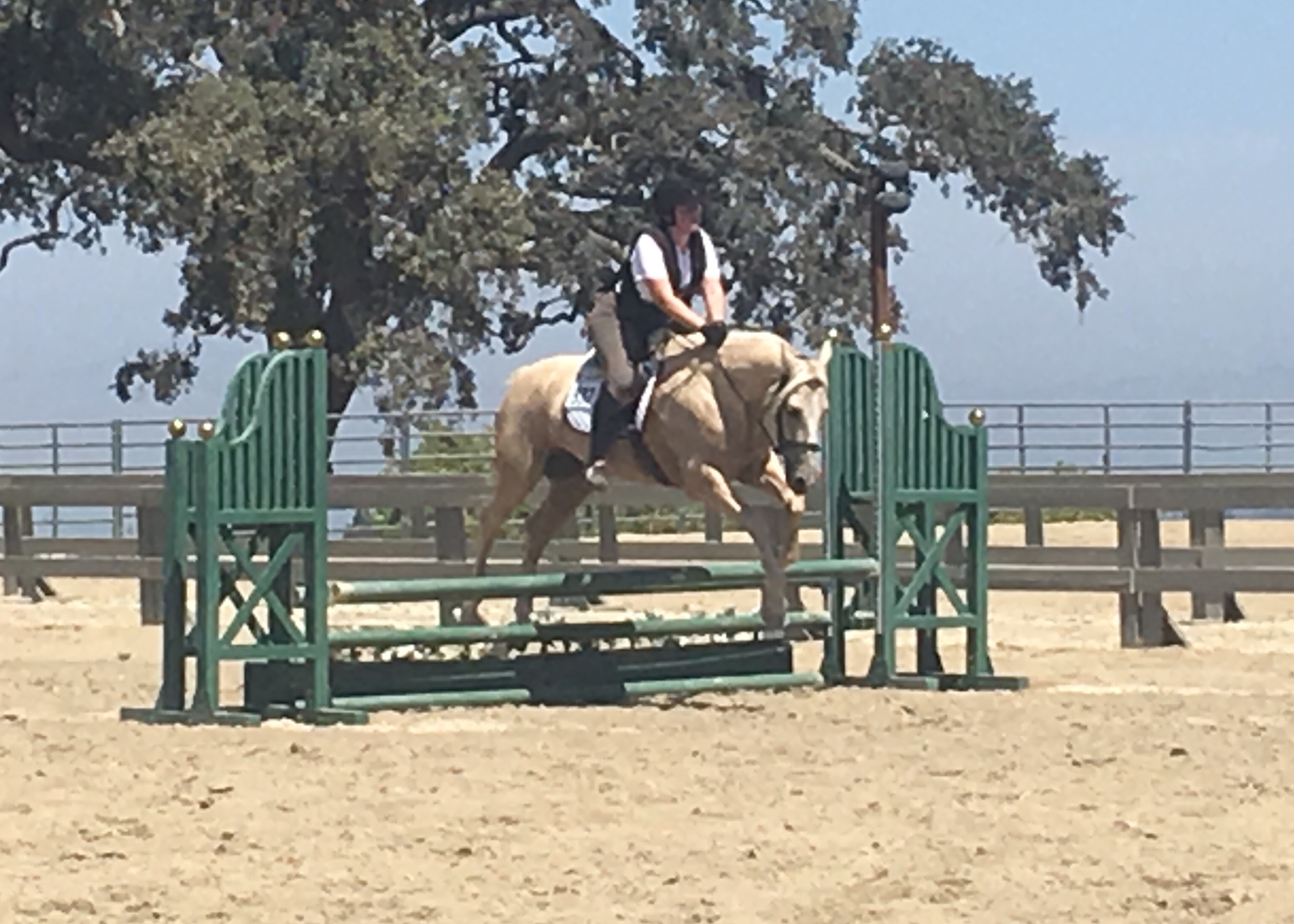 He has recently decided he’d like to chip in really close to the jumps. I suppose it’s better than his previous habit of stopping at every jump first, but it’s not really ideal. I’m not worried about it though. He’s a baby horse with an ammy rider. Awkwardness is to be expected. He just needs practice.

When you get in way too close, but your saint of a horse is still all “no touchy.” #blmmustang #hunterjumper #horsesofinstagram #greenhorse

Even when it’s awkward he tries so hard to be good and do the right thing. He got lots of pats and praise and we somehow got 5th out of 6 for that class. Again, the ribbons were irrelevant (though I do like collecting them). I really just wanted some arena time to practice. He’s getting so much more relaxed at shows, which is the whole point. 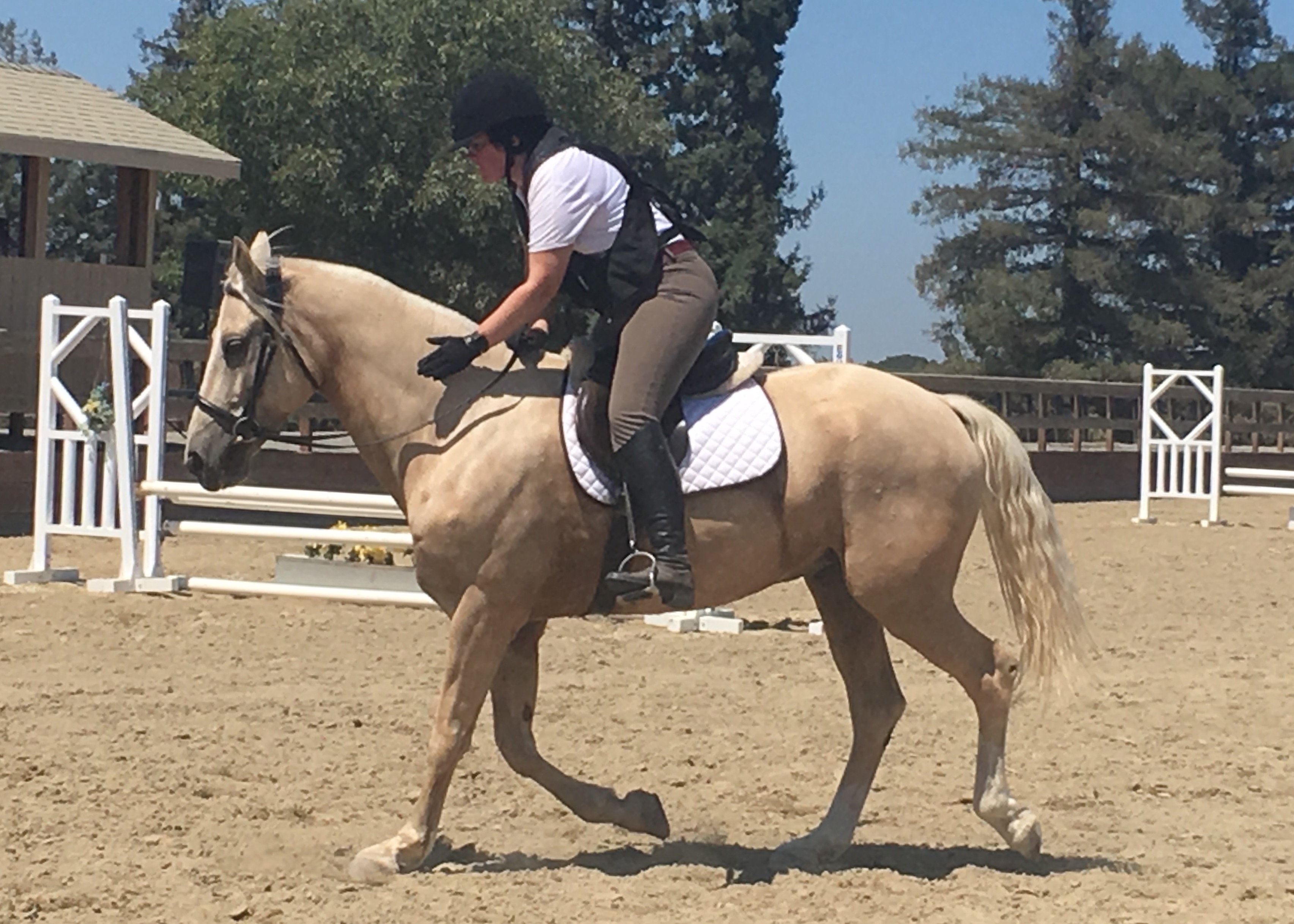 pats for a good boy

I didn’t see my husband’s 2’6″ rounds because he did them while I was down at the dressage warm up. Our barnmate got a few shots though. 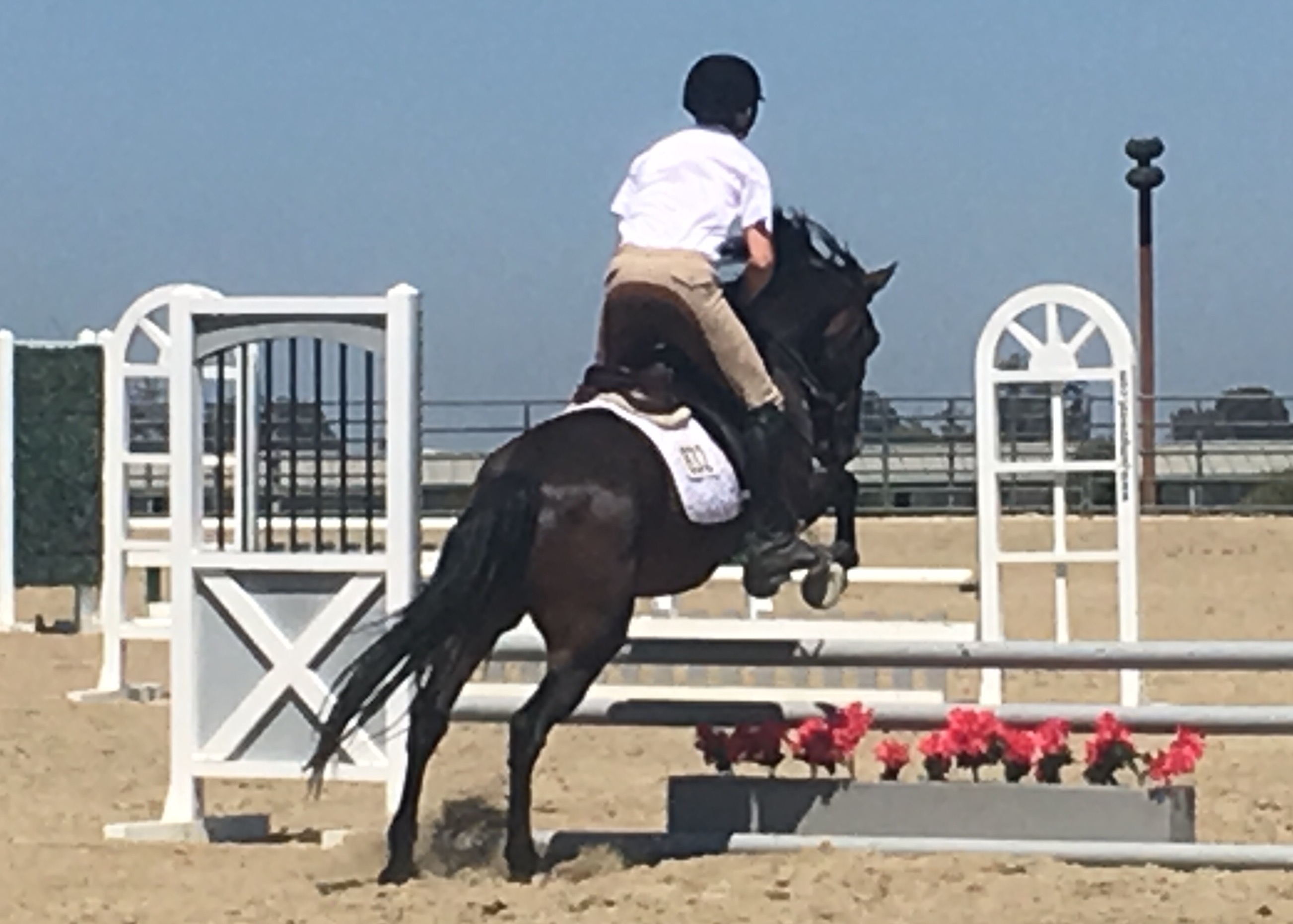 He ended up getting 4th in the warm up and 6th in Eq. I think he had a rail in eq, which is unfortunate because judges tend to like him in Eq classes. Oh well. Eugene’s a good boy even if he’s not going to win in the hunters anytime soon. 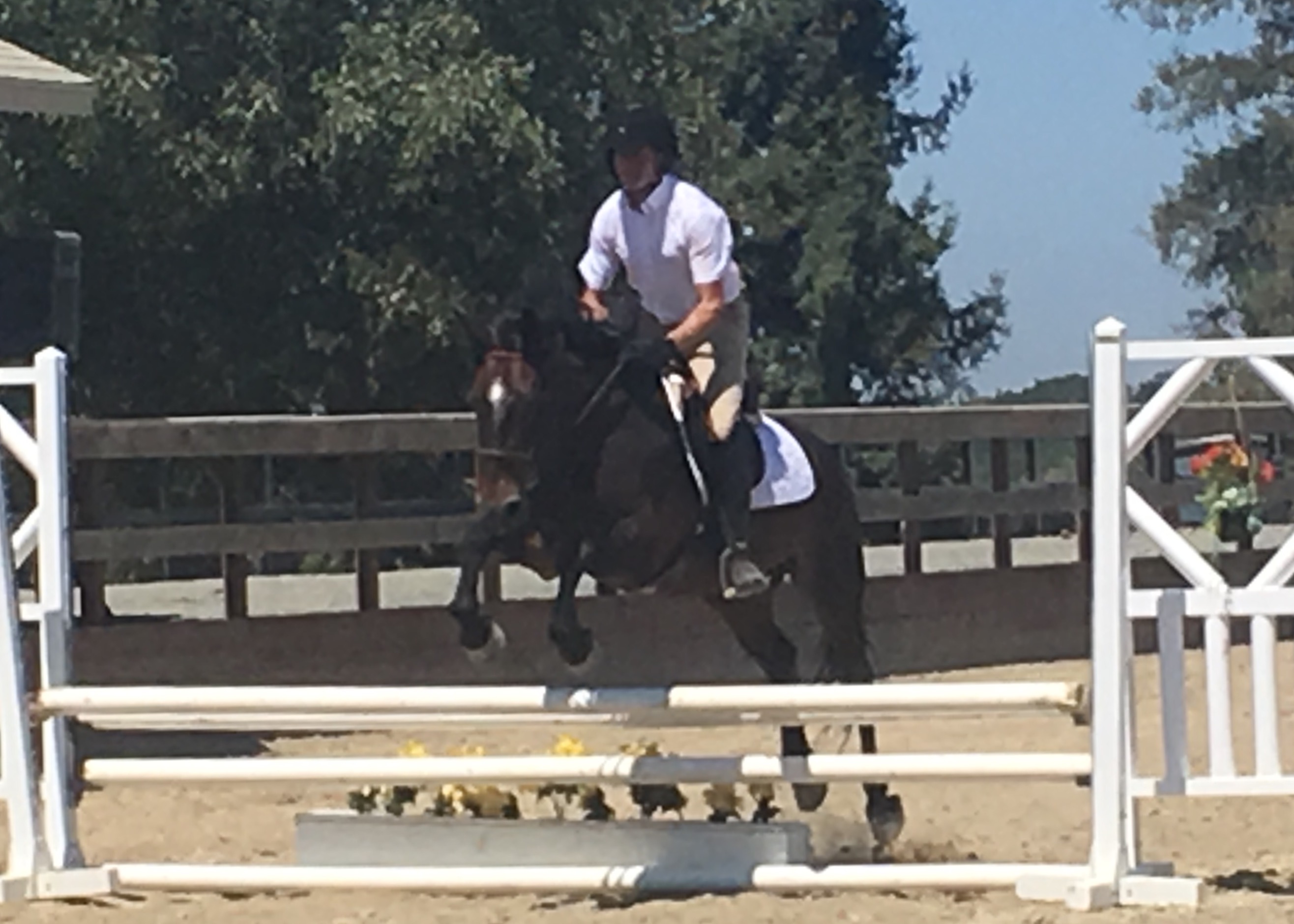