Laura Hermanson went to the US Dressage Finals in Lexington, Kentucky this year with her mule Heart B Dyna. This was the first mule to ever compete at nationals. When I heard about her, I wanted to send Nilla to her for training, but then I go caught up in riding and didn’t want to not have Nilla so I held off. However, when I found out she was having a dressage clinic for mules, I signed up right away. I’ve been looking forward to it for a while and it took a lot of planning to make it happen.

On Thursday, I loaded Shasta and Nilla, 2 dogs, a ton of supplies, and headed 4 hours out into the middle of California for a mule clinic. The barn is actually only 2:50 away, but takes longer when you’re towing (lower speed limits and also – you know – not wanting to die). And the final 5ish miles were on a road that was completely ripped up for construction – down to dirt and rocks – so I to go like 10 miles per hour.

By the time I got there, Shasta and Nilla were pretty done with being on a trailer. I fed them and put them in their pens while I parked and got the dogs settled. Before it got totally dark, I took them down to the arena to run off some steam. Shasta was in complete half-Arabian half-snorting dragon freak-out mode.

I let them run around and roll a bit and then took them back to their pens. I was invited in for dinner. This whole clinic was like a club – everyone ate together and knew each other. I guess the mule world is pretty small. It was nice to chat with people while eating. After dinner, Laura helped me feed Shasta and Nilla their hay since my husband was running really late and I’m wildly allergic. Of course, my husband showed up shortly after this. We had to be up early for the clinic, so we read for a bit and then went to bed.

We woke up at 7:30 to give the horses their hay, feed and walk the dogs and then get ready for the clinic. We tacked them up and were on and ready to go at 9am. First up was an equipment check where Laura explained that my noseband was on too loose and my flash too tight. She also move the bit up one hole. I actually got off and had her show me what holes to have it on. I’m so used to hunter/jumper world that I thought the noseband was already tight.

We spent the morning session working on connection to the bit and flexing. This was really helpful as it’s exactly what Nilla needs work on. It’s also what my husband needs work on. Shasta knows how to do it, but he doesn’t know how to ask. It was nice to watch him unlock her talents. 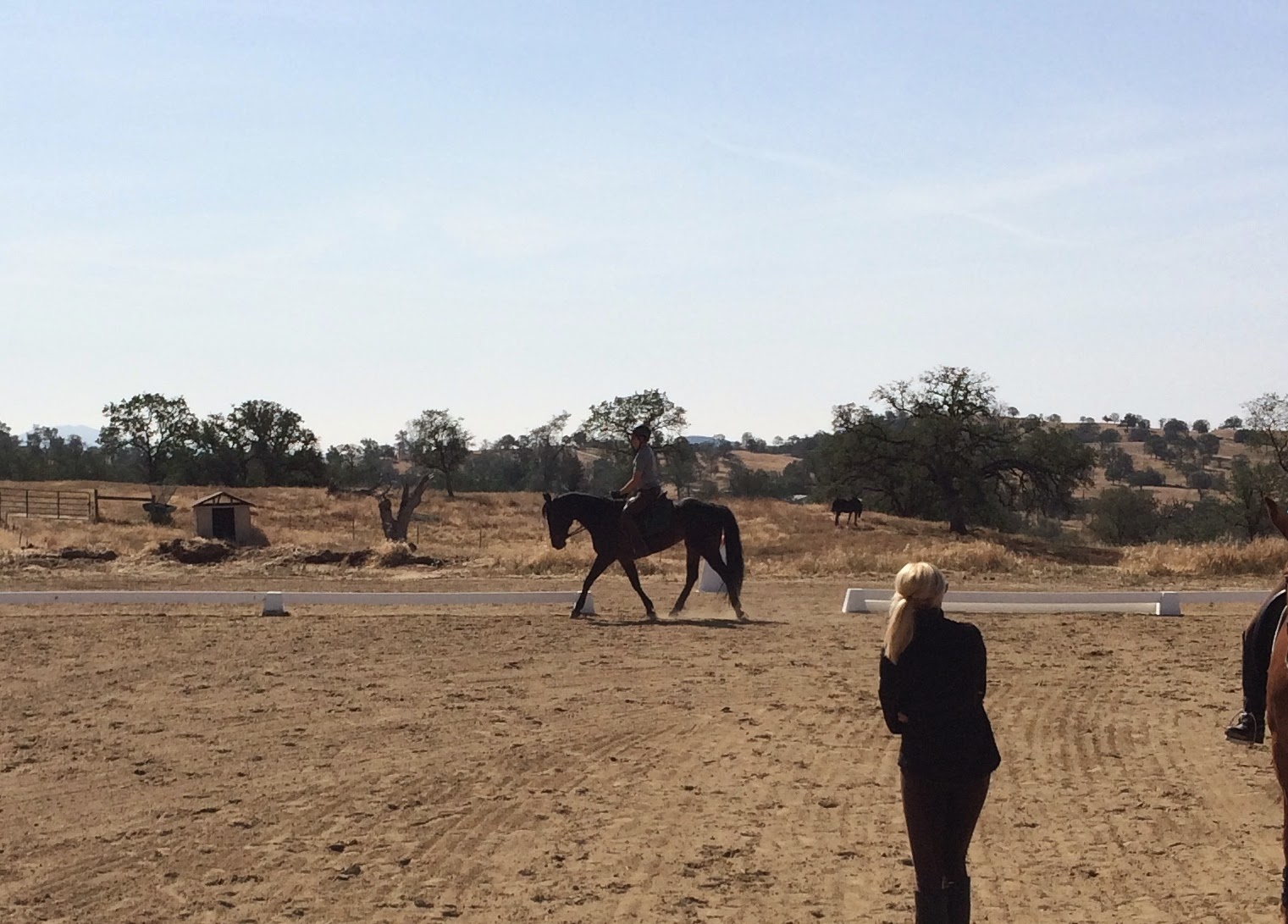 Unfortunately I only had my iPhone in my pocket so I don’t have any quality pictures. I also have no pictures of me riding in the morning since my husband is useless at taking pictures unless I pester him. The morning session was supossed to be 9-11, but ran until almost 12 and near the end Nilla was absolutely done with it. She was throwing her head around and refusing to stand still and generally being obnoxious.

Worst of all, she actually laid down with me on her. Thankfully she didn’t role so I was able to pull my feet out of the stirrups and hop off. Laura said that this happens rather frequently as the arena has nice soft sand and horses like to lay down in it. I dragged her off to the mounting block to get back on and she tried to lay down again. I smacked her, she got back up and we went back to the clinic where she continued to jig, spin, paw, chew on her bit, and shake her head around to express her displeasure.

When we put them away for lunch, she proceeded to lay down in her stall. During lunch, one of the other clinic attendees was telling Laura that she thought Nilla was colicing because she had laid down in the clinic and now in her stall. I could hear her even though she didn’t think I could because we were across a small field from each other. And I was like, why would you not tell me if you thought this was happening? Laura told the woman Nilla was fine. And she was. I’ve never known an equine to colic while stuffing their face with anything in reach and drinking. Nilla ate all her hay at lunch and continued munching on any stray dead grass she could reach and drank plenty of water so I wasn’t concerned. She also wasn’t rolling or twisting around, she was just laying there, looking pretty tired. 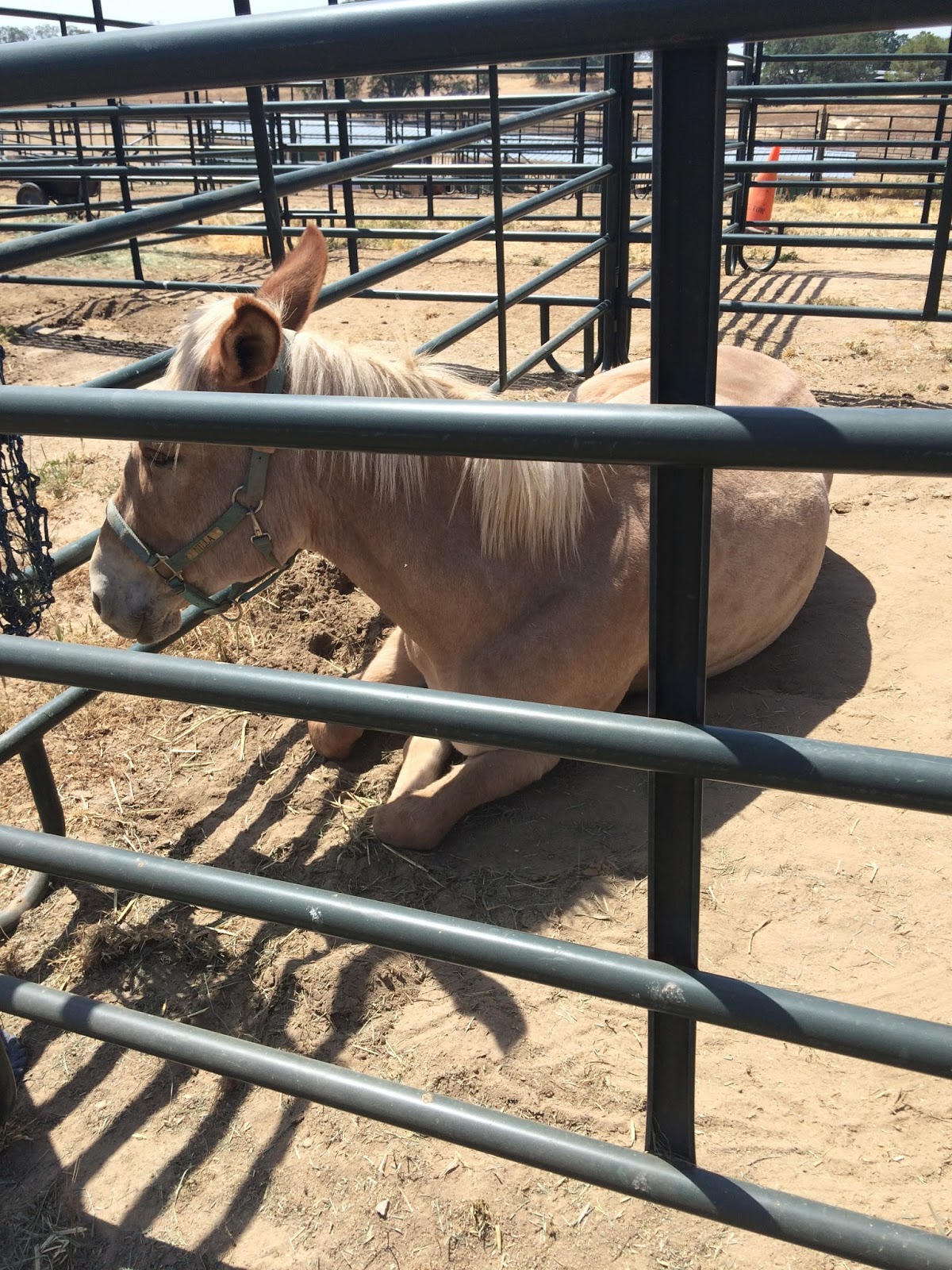 After lunch, we had a saddle fitter visit who did a western and english demo. She was really helpful and it was a very informative demo. She drew lines on the other mule’s back with chalk to show where the muscle groups were and then showed how to fit a western saddle and how to shim a pad to make it fit the mule. She knew a lot about mules and their anatomy so that was especially helpful. After the western demo, she looked at Nilla for an english demo and basically told me the Duett did not and would never fit Nilla. I knew it wasn’t a great fir, but I didn’t think it was that bad. I was planning on buying a new saddle anyway, but now I am just going to sell the Duett and not use it again. Laura let me borrow one of her jumping saddles that didn’t fit perfectly, but fit better for the afternoon session. 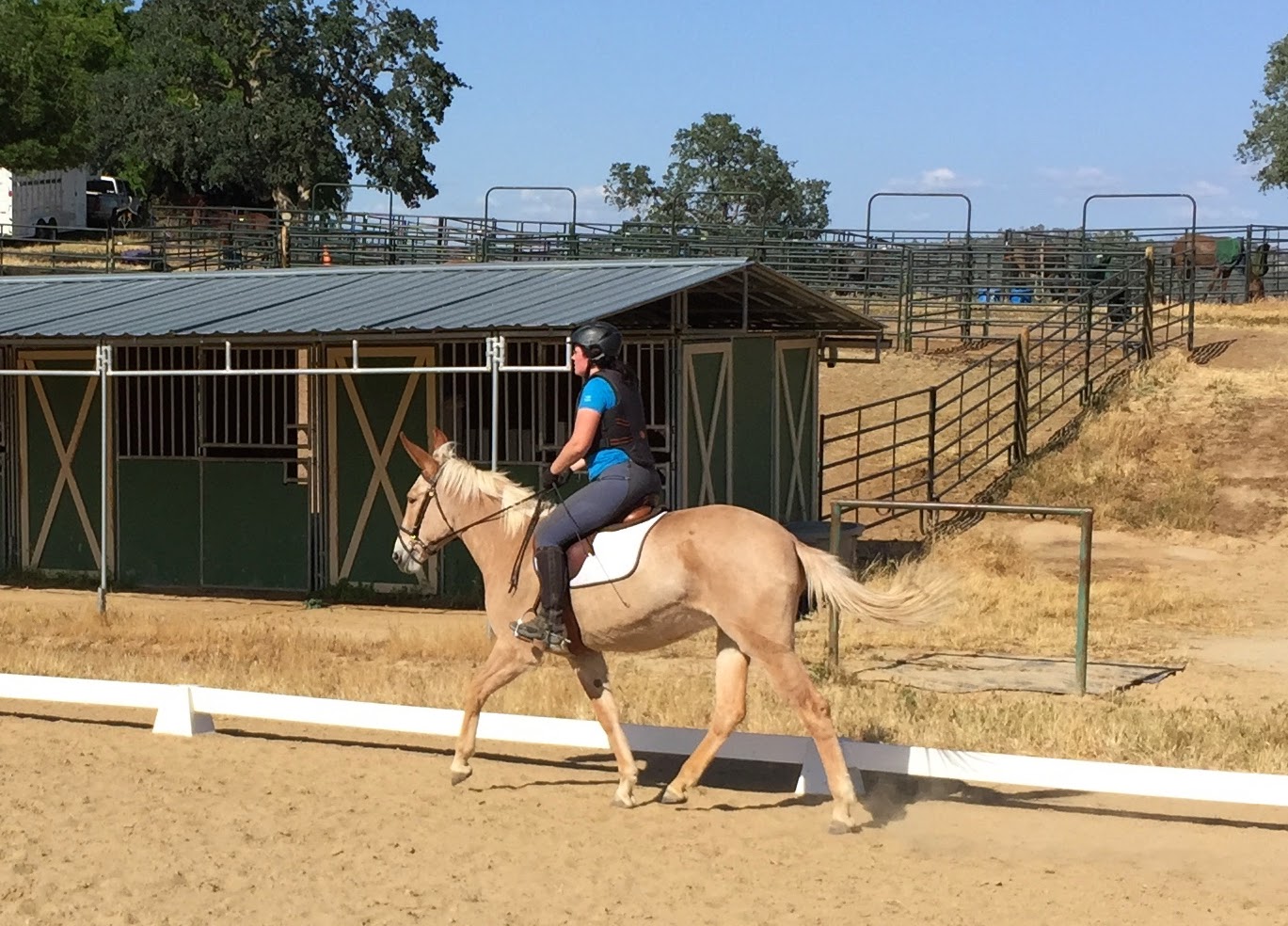 For the afternoon session, we did some of the movements from Training Level Test 3, which is the test done at Mule Days – a huge mule show in May. All of the attendees aside from my husband, my self, and Laura’s working student were planning to compete at Mule Days so Laura was really focusing on how to win the test – how to impress the judge and ace simple things like where to go in the corners – it’s not that deep until later levels which I didn’t know.

She also did some work on how to do a stretchy walk – with the goal of moving on to stretchy trot, but none of the mules were ready for that yet. Shasta was the only one who really stretches towards the contact. 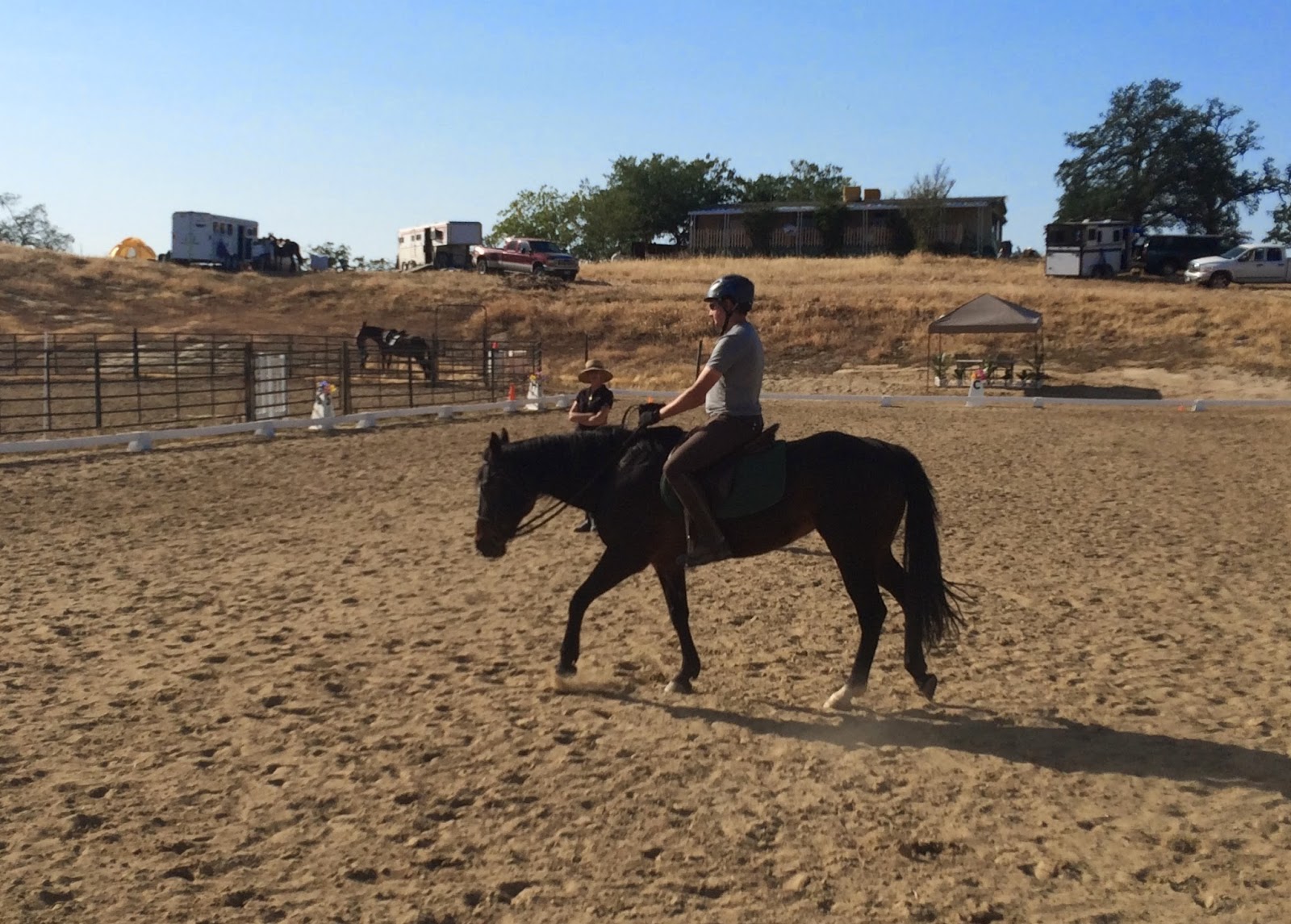 Shasta got a lot of admiring comments from Laura, the other clinician, and pretty much all of the attendees. But it’s sort of unfair competition taking a horse to a mule clinic. And not just any horse, but an incredibly well trained and talented horse at that. Nonetheless, my husband had a lot of fun.

We finished up the clinic, put the ponies away, rescued the dogs from the truck and then hung out for a bit relaxing from such a long day in the saddle. We had come to the clinic planning to just do Friday’s dressage clinic and then leave Saturday morning, but I packed enough horse, dog, and human food to stay Saturday if we decided to. Saturday was western, but I talked to the clinician and the focus was more on training, not anything specifically western and she said we were welcome to participate. Since we drove so far to get there, I figured we should try it out.

We had dinner with the group, let the ponies out to roll and run again and then went to bed. I managed to read a little bit, but crashed around 10pm, which is really early for me. We were so tired we apparently slept through a car flipping over on the road around 3am, all of the paramedics arriving, and even a helicopter circling. I guess close to 6 hours in the saddle will do that to you.