While Eugene was busy being a super star baby Mustang at his first show, Nilla was occupied with really bringing out the ass inside her. She’s been a bitch about dressage lately. At our last lesson, which I didn’t blog about, she was actually great and my trainer was trying to convince me to go to a rated show. Then we decide to do “one more thing.” Everyone knows how “one more thing” goes right? I asked her to do a leg yield, she decided to bolt. She doesn’t really do one rein stops so I got her to stop galloping forward, but she then proceeded to spin in super tiny circles like a turn on the forehand on crack, until she tripped, fell down and I fell off. Thankfully, she managed to regain her footing enough to not fall on me.

I was not impressed. I went and got a bit she hates – a waterford – that she at least won’t bolt through. It solved the bolting, but not the generally pissy attitude. It also increased the tongue problem. Everyone thinks the tongue thing is adorable, but it’s really not. Now when it causes repeated loss of points in a dressage test. While I would normally not show with this level of crazy, I figured this was a schooling show and I was already going anyway since my husband was showing so I might as well enter.

My husband’s test was at 9 and mine wasn’t until 10:30, so we had plenty of time to relax then tack up and head over to warm up. Nilla was lit and basically ignoring me. There were a lot of thoughts about rearing/bolting. There was certainly absolutely no relaxation or going on the bit. Goals for the test became: no rearing, do not fall off, and no temper tantrums. 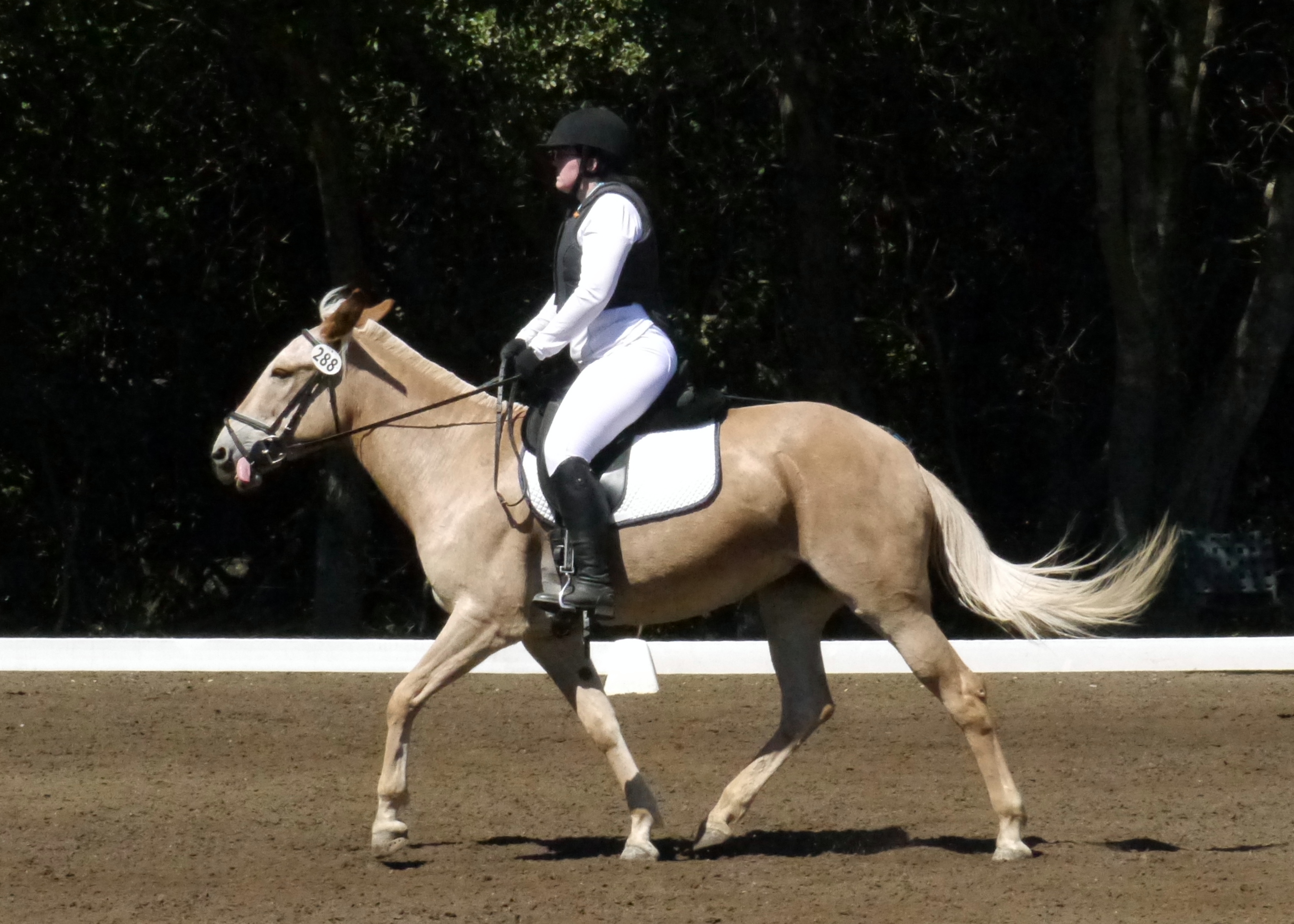 The test was BN B. We did the first trot circle at B and came around do the KXM change rein. Around M, Nilla felt like we should canter. When I stopped her she sucked back hard and I thought she might pitch a fit. I was so busy concentrating on that, I almost forgot to turn across the arena at K. Things went downhill from there. 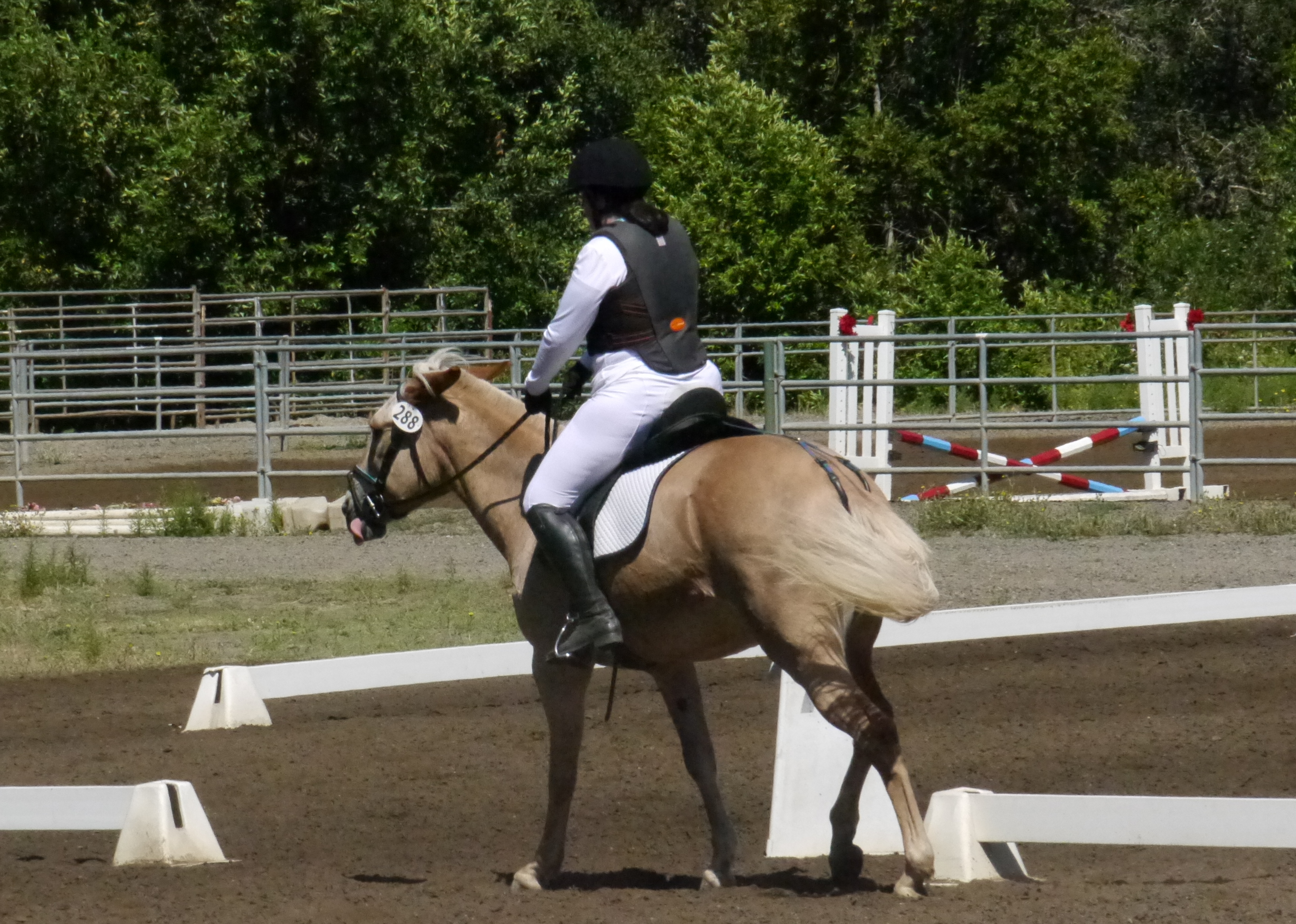 Although I couldn’t see her tongue hanging out, I could feel just how much of a disaster this test was. Looking at the pictures after the fact was just further illustration of how bad it was. 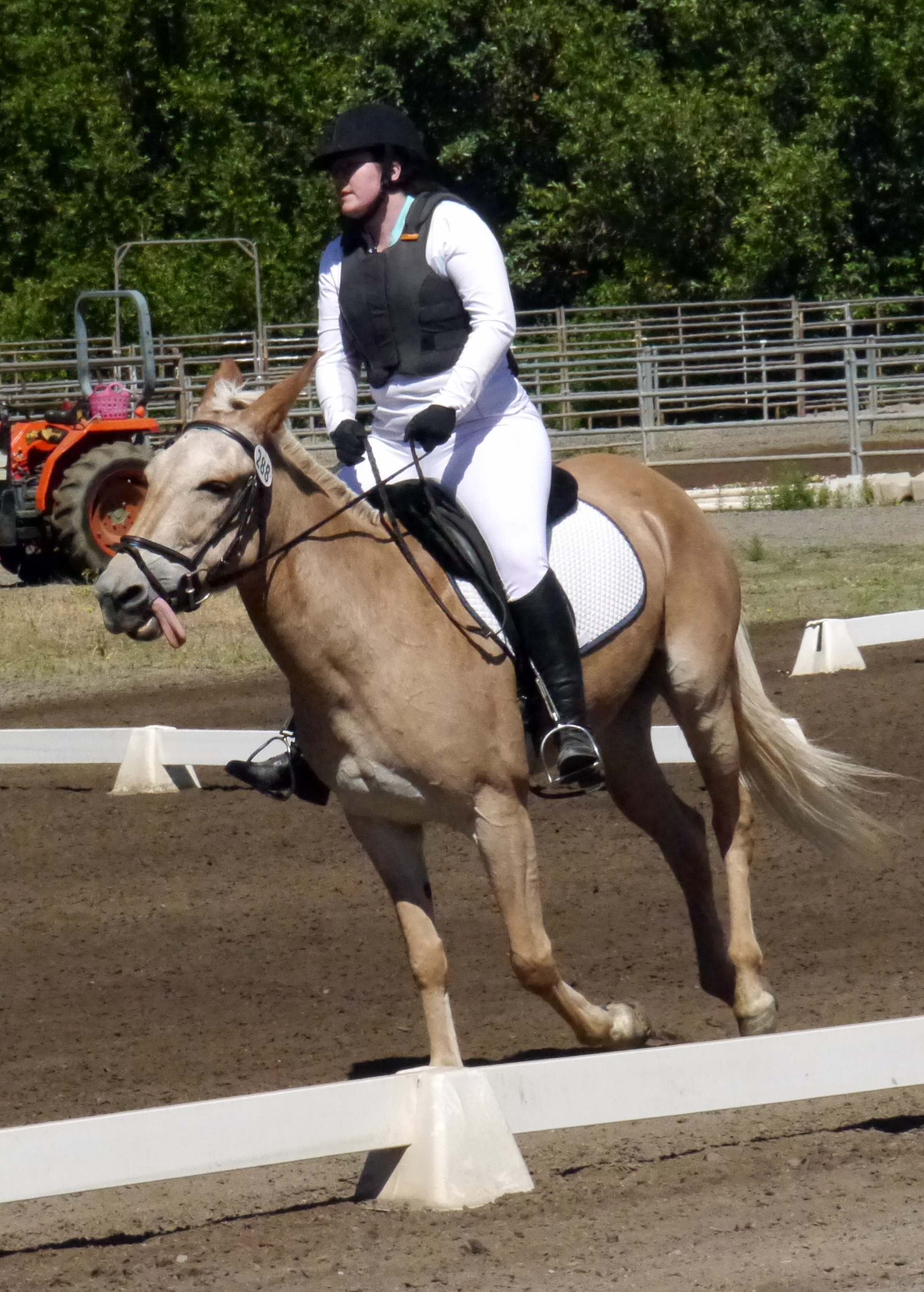 Look at that tongue

For whatever reason, Nilla actually did a decent free walk. She actually lowered her head like a real dressage mule. And she kept her tongue in her mouth. Yay? I was so happy to be done with that test. As I exited the arena, a spectator was nice enough to compliment us on the test, but it was truly terrible. Not only was it terrible, but it’s the worst she’s ever done so I feel like we’re only going backwards.

After dressage, we left the ponies to their hay and went over to walk the XC course. From the parking lot, I could see a potential problem: flags. All the jumps had red and white eventing flags, which Nilla has never seen before. And I might have thought to practice this at home, but they’ve never had flags on the courses at this facility before. The course was a little bi-polar. Some of the jumps were quite big, while others were tiny little logs. Most of them we’d done before when schooling, but I knew the flags were going to be an issue. Thankfully, most of the jumps were really wide so I figured the flags would be far enough away from us in the middle to make it possible to get over them. 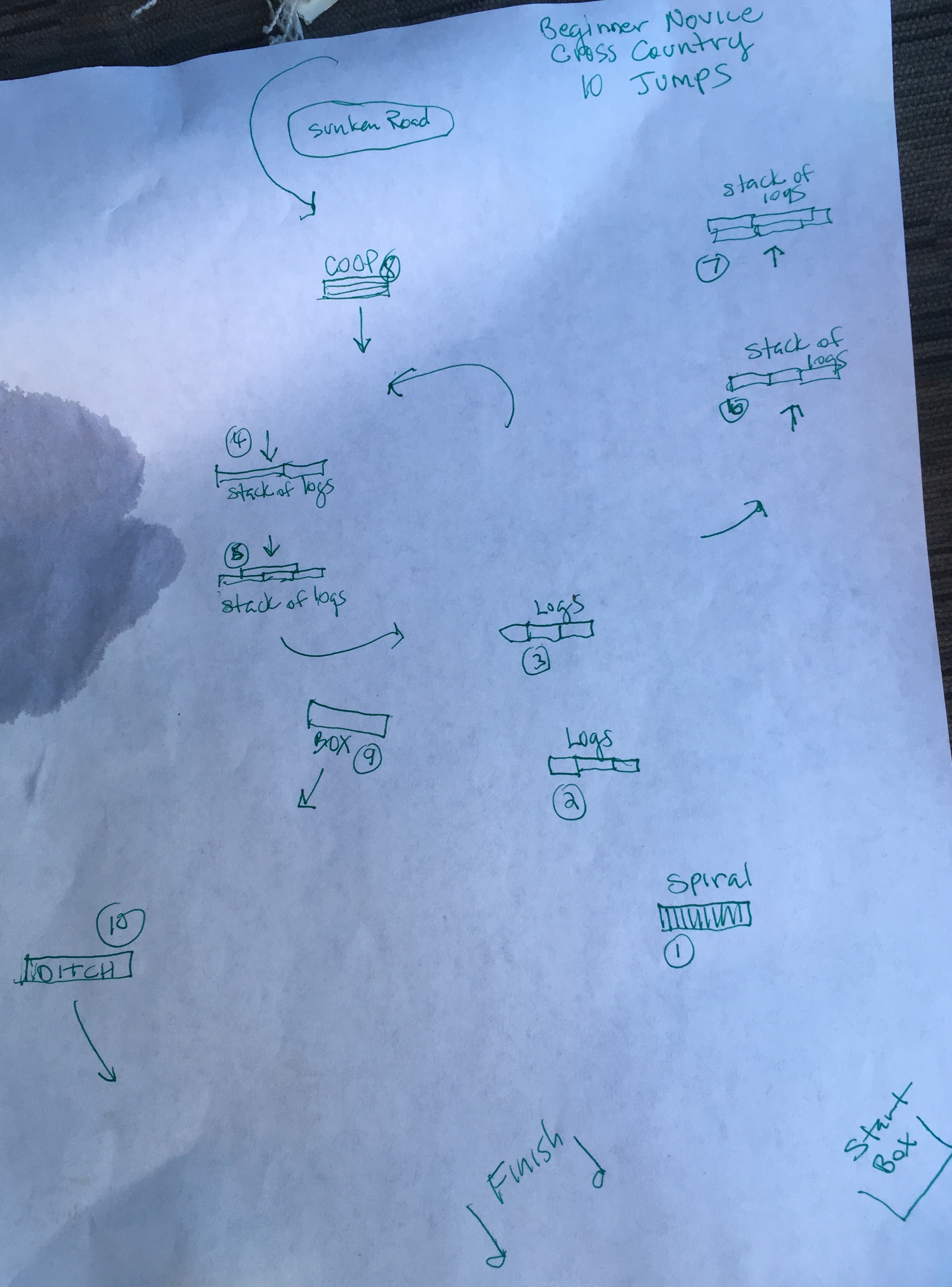 Of course, in addition to the flags, I had my concerns about the abundance of lizards. Here’s two of the little bastards sunning themselves on jump #4: 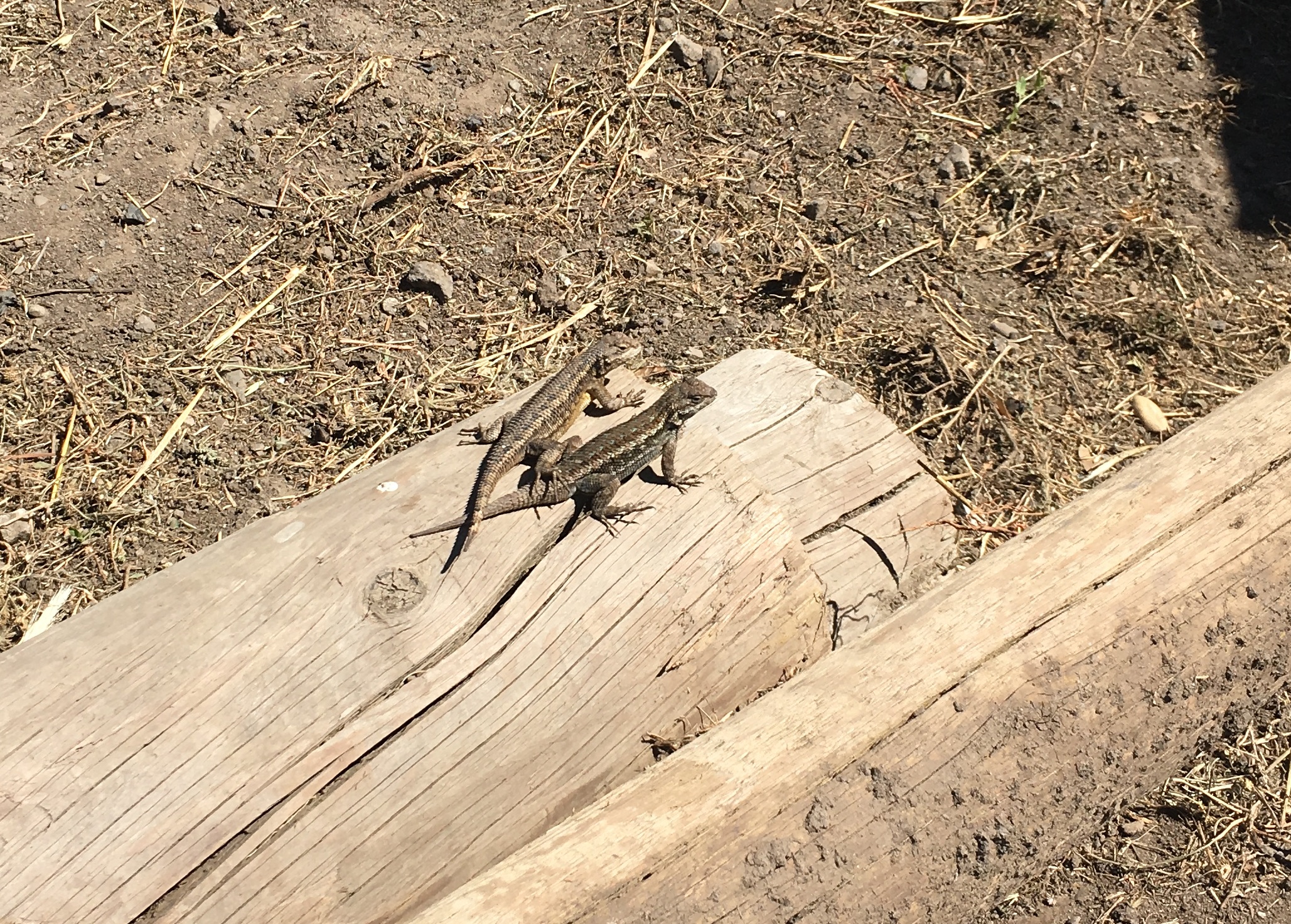 Here’s the jumps from the course walk. You can see how many of them are nice and small, while others are pretty big. Nothing we couldn’t jump, but just so much higher than others. You can also see how nicely wide a lot of the jumps are. 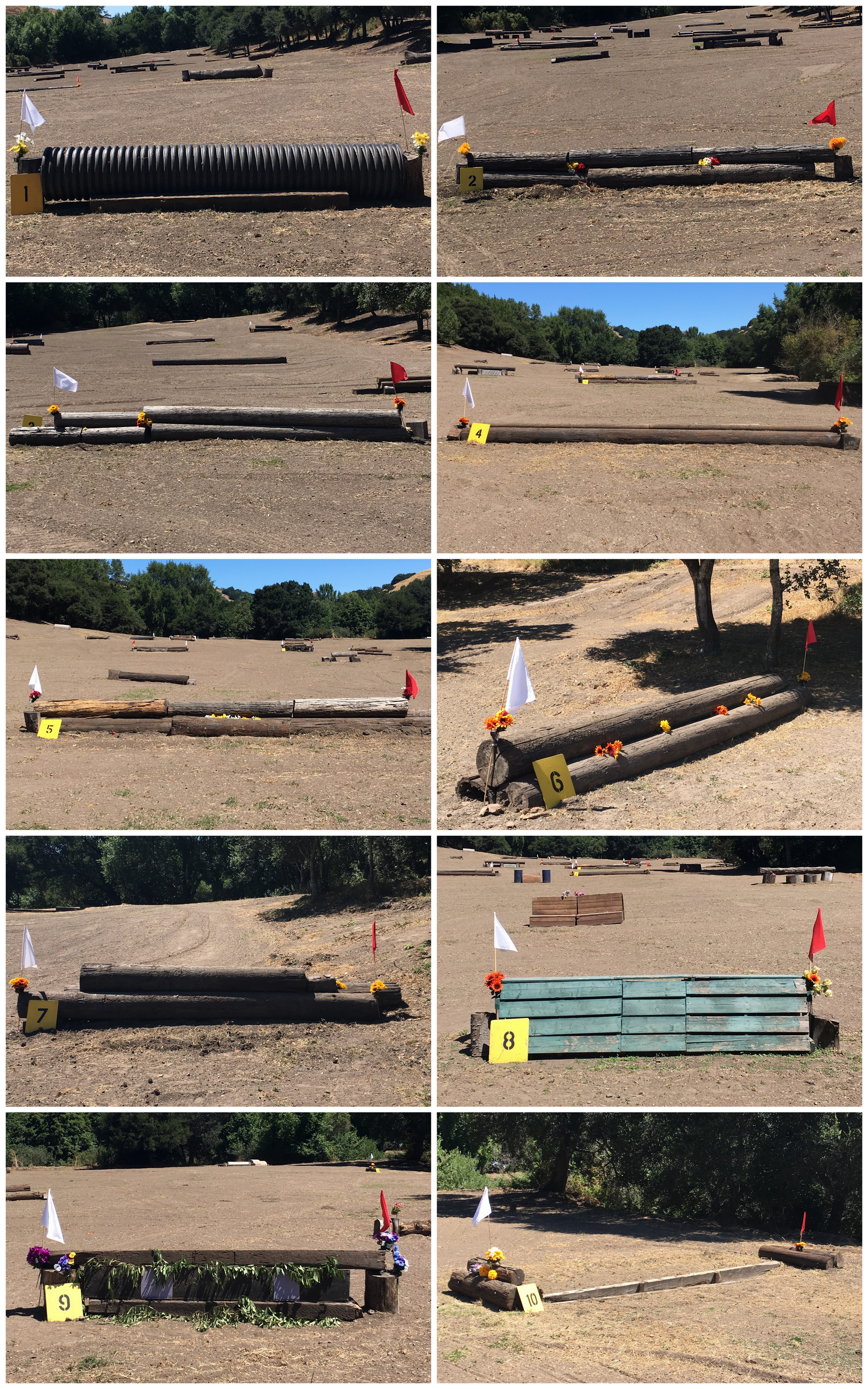 Once we got back to the trailer, we had a lunch break while watching some more dressage and then set about tacking up for jumping. I tacked Nilla and left her at the trailer while my husband did his warm up and course. Once he was done and the other riders had finally showed up, I hopped on to warm up. I did a little walk and trot and pointed her over two jumps. She was actually being pretty calm and quiet so I quit. 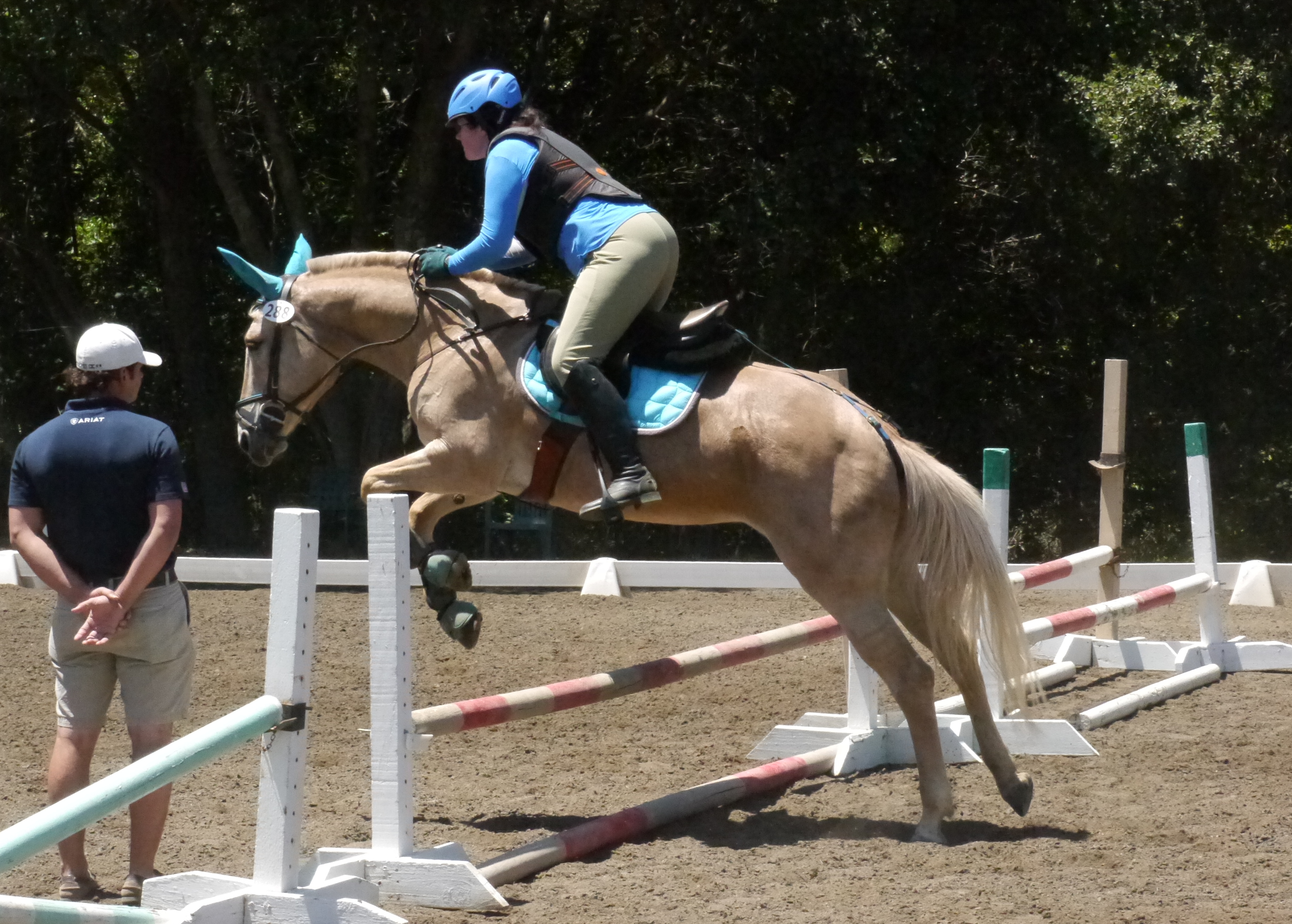 Other rider’s trainer is not actually watching me

Then we stood around for longer than I anticipated. I watched them raising the jumps from Intro to BN and was getting nervous as usual since I’m a wimp. But I knew they weren’t actually big jumps. The course was also really easy: 3 straight lines, 2 bending lines and two single jumps. What I didn’t know was that Nilla would decide the jumps weren’t big enough and take it upon herself to make them even bigger. 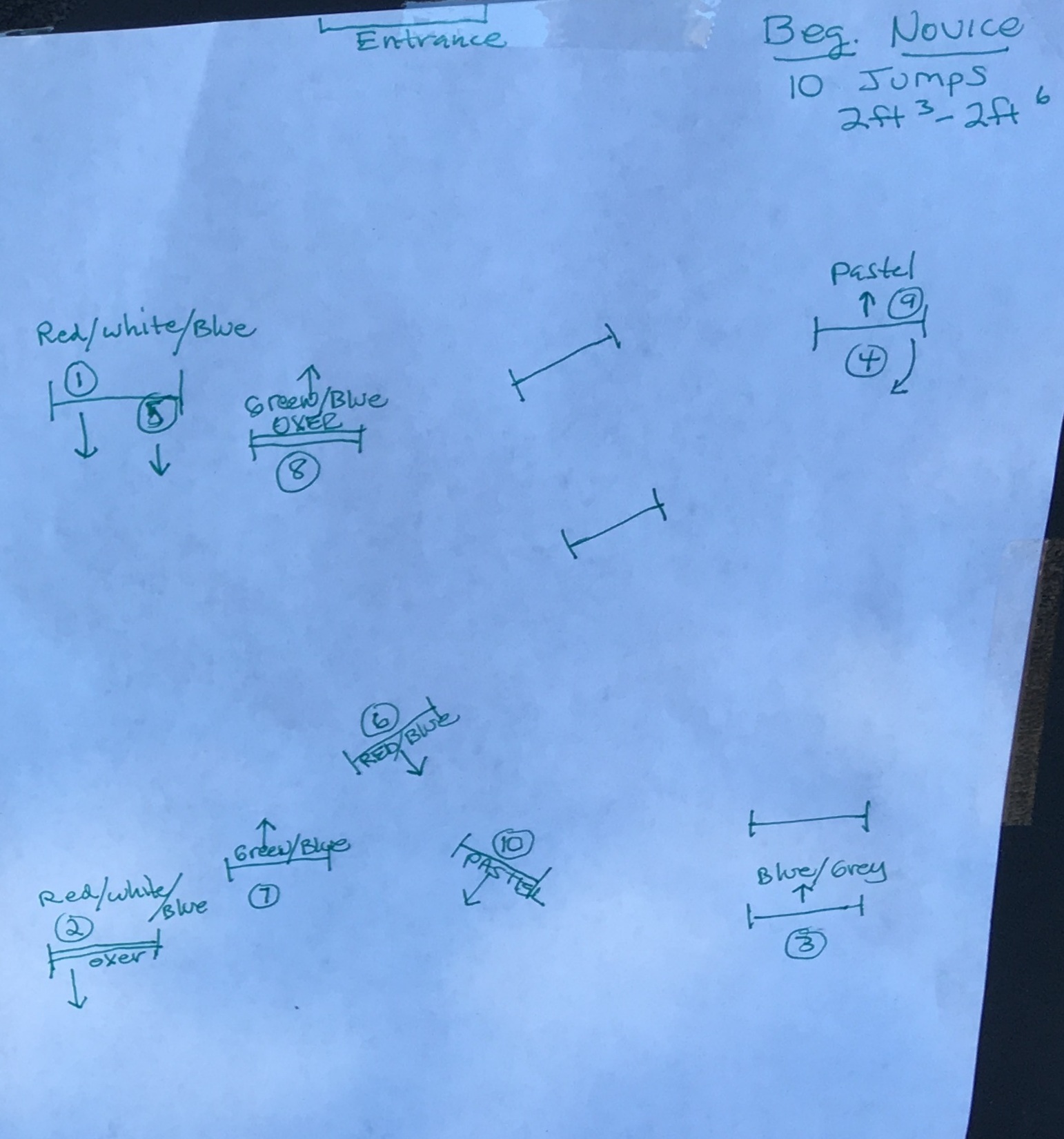 Coming into the first jump, she was feeling quite frisky. She cleared that jump and landed frolicking. It was kind of like bucking, but with some leaping and general head-tossing thrown in as well. I barely managed to get her back down to trot before the upcoming oxer which was a straight line from #1. Even with trotting, this was an intensely awkward jump. She launched herself over it like it was a good foot taller and wider. I got completely jumped out of the tack and lost a stirrup, which I managed to pick up a few strides after landing.

The crazy over-jumping did not stop there. 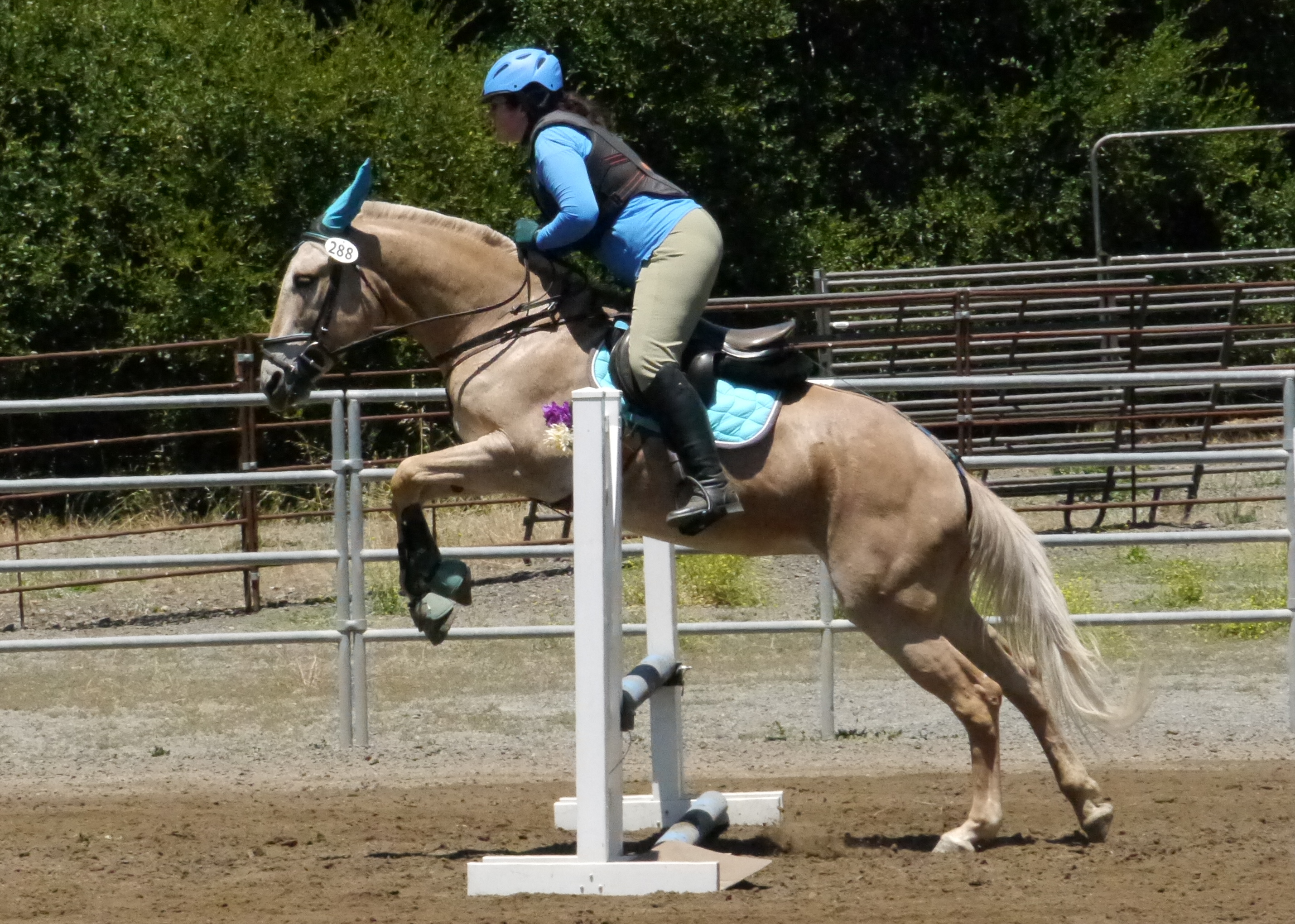 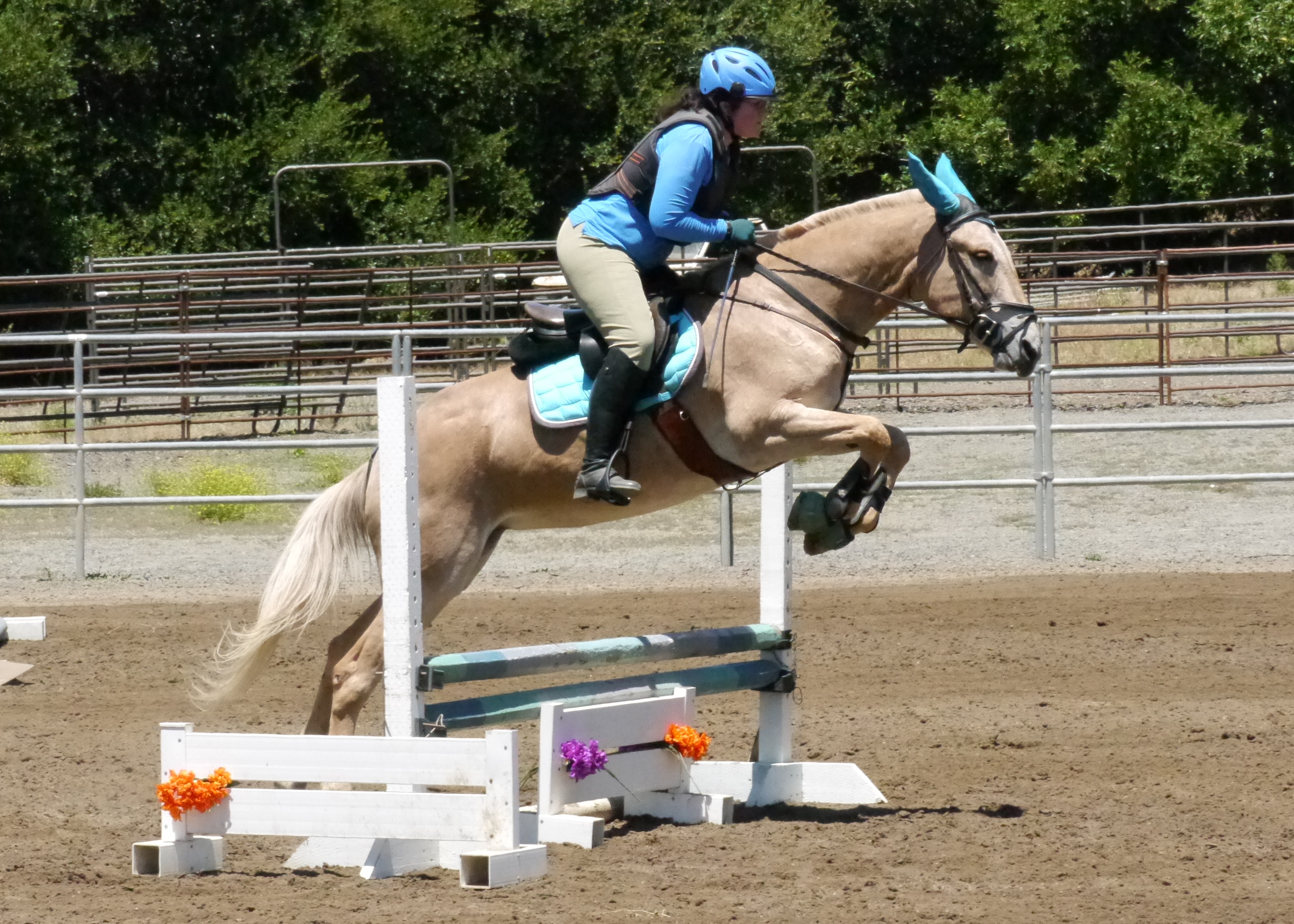 I felt like I was one step away from falling off for most of this course. When we finished we got a lot of applause and my husband said a bunch of spectators had expressed a lot of mule love during the round. Apparently they all thought she was a great jumper and the round looked good. I thought it felt like a train wreck. We were clear though, so I skipped my second round to be done. 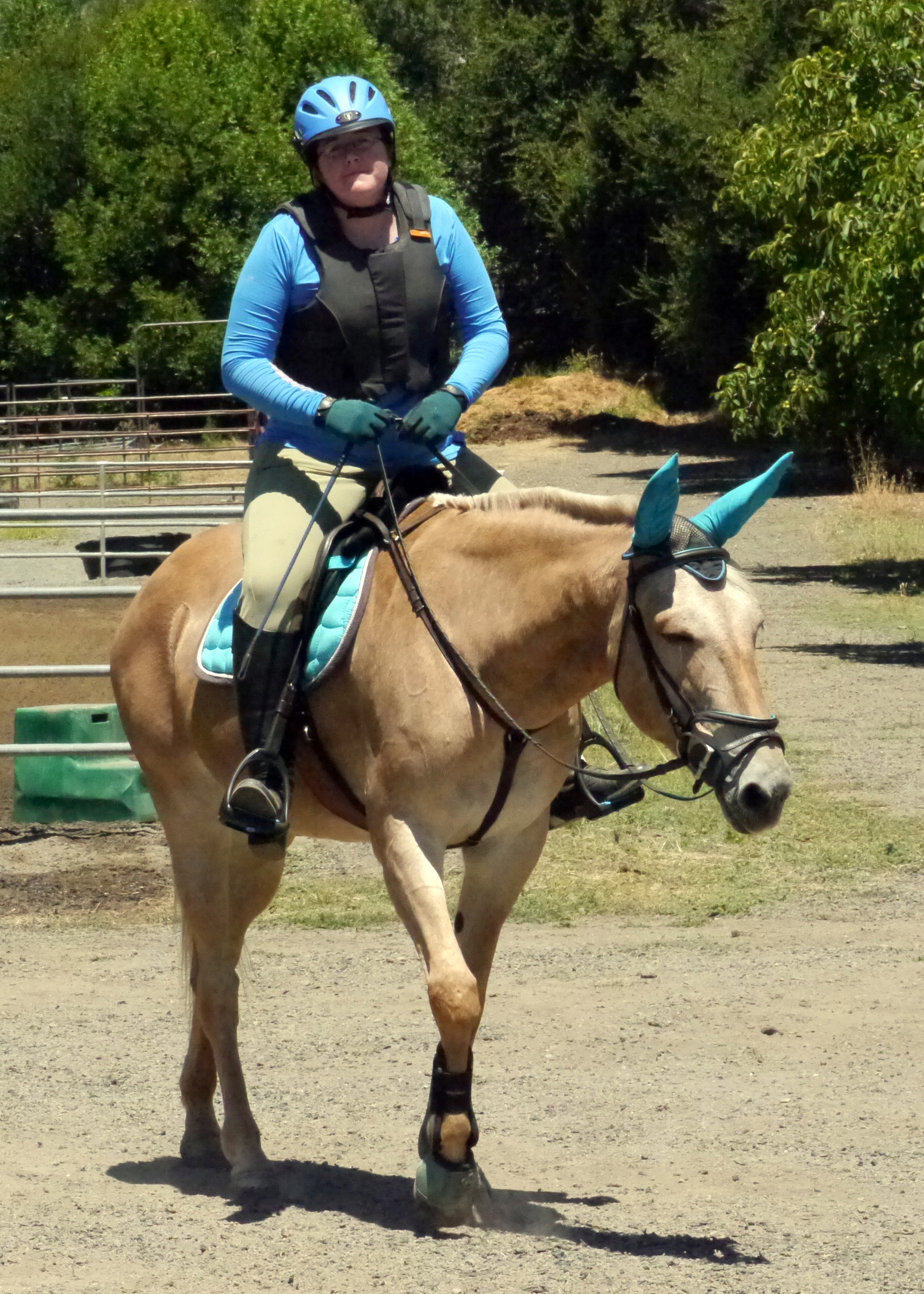 We had another break before XC while the other levels finished their jumping rounds. We finally walked over around 2. There were only two people signed up for the horse trials (all three phases). More people did just the CT and a few just came for the dressage or the jumping alone. I got to go first. Since we were already in last place, I figured the whole round would just be schooling as I knew she was going to freak out about the flags. Predictably, Nilla saw the first jump and slowed down. Then jammed on the breaks. When I tried to kick her forwards, she spun sideways. I circled her around, smacked her, and she proceeded to crawl up to the jump and then deer leap it from a standstill. I know you’re thinking no jump could be more awkward than #2 from stadium, but no, I am that talented at awkward jumping. Lo and behold:

She was squirrelly to the next jump, which was on a downward approach. Jumps 3, 4, 5, and 6, were big and wide, and helped her calm down about the flags. We cleared all of them easily. #8 was a skinnier coop and she was a little hesitant, but we went right over it as well. Then we hit #9, which was honestly pretty scary looking. It was a box filled with branches of leaves dangling out of it surrounded by square logs. It was also narrower with the flags close to where she’d need to jump. I knew it was going to be a problem just walking the course. As we approached, Nilla slowed and then stopped. Having given up competing and just there for schooling at the point, I took the time to walk her in a circle by the jump and let her check it out. Then we represented and got another awkward hop, but made it over. 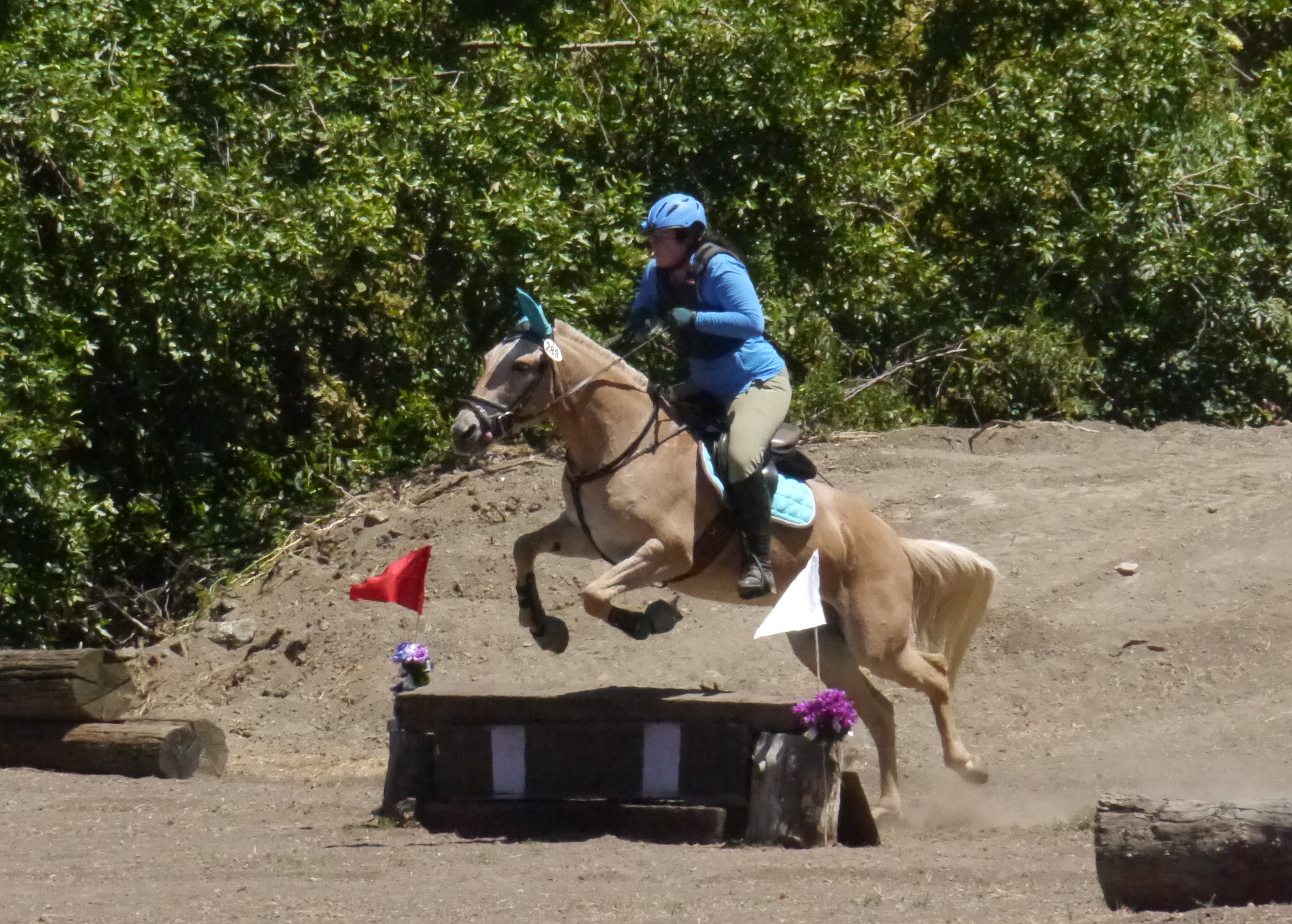 #10 was a simple ditch and Nilla cares not about ditches so we sailed on to the finish. 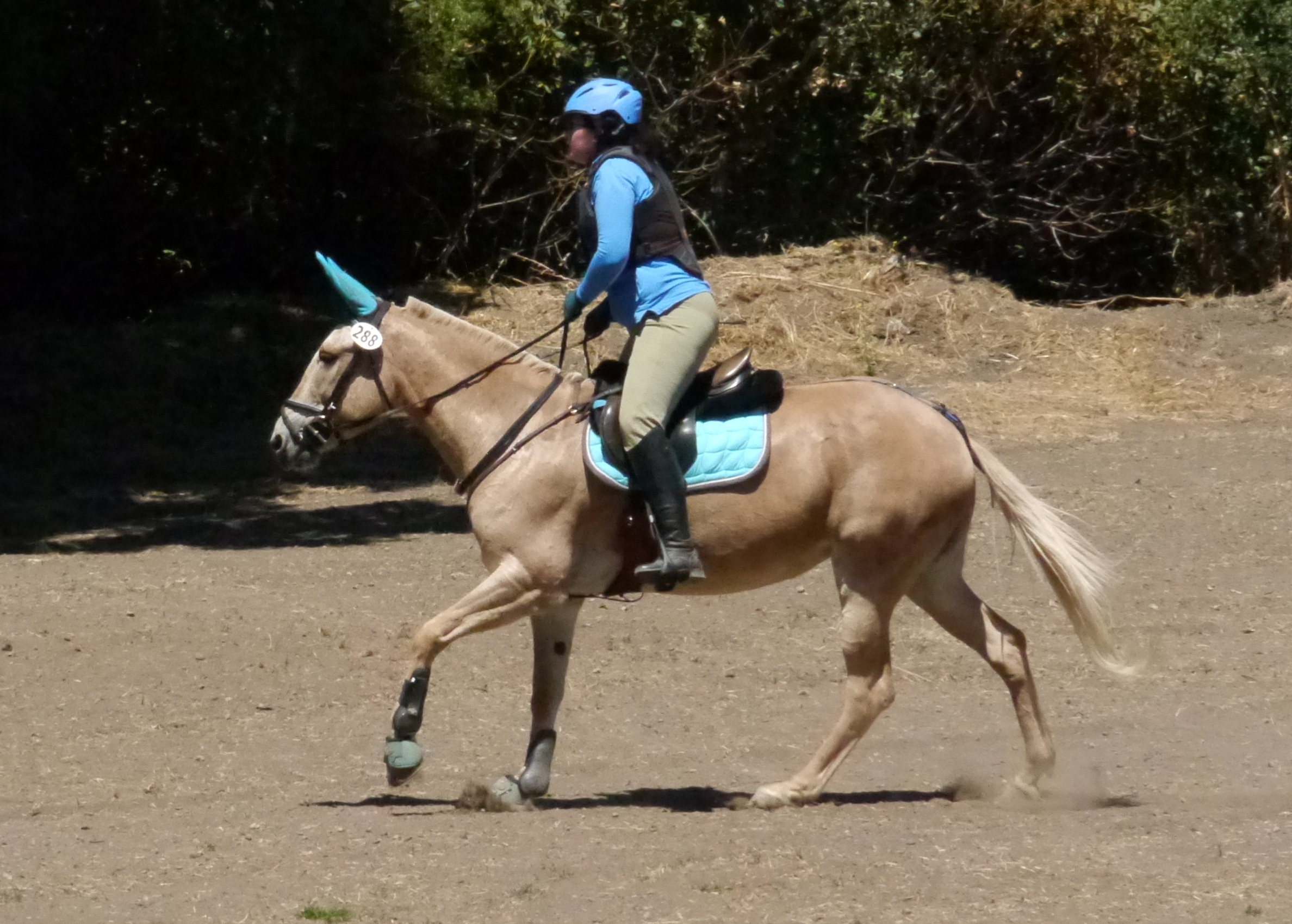 I don’t blame Nilla for any of the stops on XC. It’s not her fault I never schooled her over flags before. And she did get over everything in the end. But I do blame her for her behavior in dressage. I’m honestly not sure where we go from here. I talked to the dressage judge and she was very apologetic. She said she wasn’t allowed to score higher than a 5.5 for any movement during which she could see Nilla’s tongue. 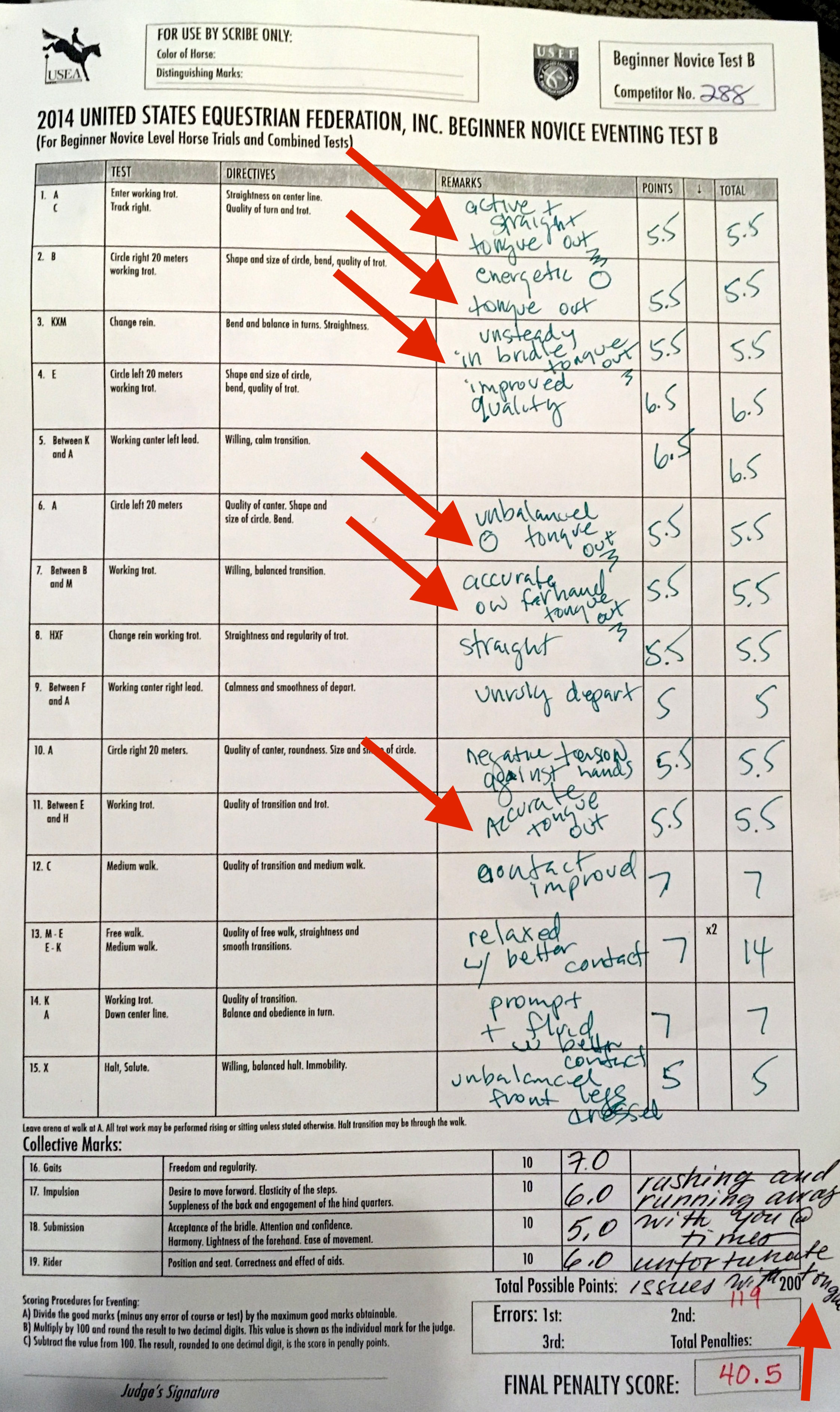 Every arrow is a mention of tongue. To be honest, we didn’t deserve higher scores for those movements regardless of tongue. It was an ugly test. This is the worst score we’ve ever received in dressage and I actually think our score should be lower even given that it was a schooling show.

But I also don’t know where to go with this. If I cannot get her to keep her tongue inside her mouth there’s no where we can go within the dressage or eventing world. It won’t matter if I send her back to Laura (a thought I have honestly had a lot recently) and get the rearing issue solved. I cannot do dressage without a bit and she will not keep her tongue in her mouth with a bit.

This was a rather frustrating show for that reason, but I still enjoyed the show itself. It’s very well run and a the people are really nice. My husband had a great day doing the combined test and then he did XC schooling afterwards. Stay tuned for that story tomorrow.