Once again, Rolex was excellent. This year we went for all 4 days, which was really nice. Thursday is much less crowded and we were able to actually check out vendors without being squeezed and while they still had lots in stock. And we got to see Michael Jung’s winning dressage ride.

We also had time to check out the International Museum of the Horse, which we only got to see a little bit of last year before running out of time. It’s an excellent museum although some of the pictures look like they were selected by people who don’t actually ride or know anything about horses. They had a special exhibit on horse sports and I found the endurance exhibit to be “interesting.” 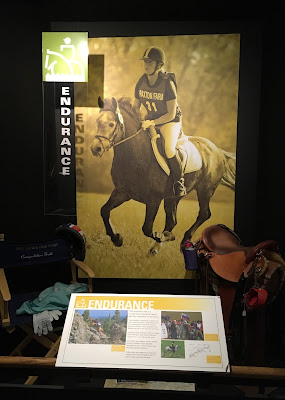 Why is there a picture of someone doing eventing for the endurance poster? The world will never know…
With the extra time we were also able to watch a few of the special demonstrations. I loved this sidesaddle Friesian rider: 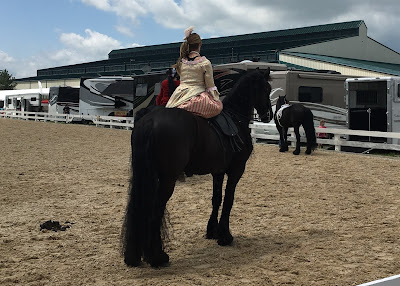 I didn’t get any pictures, but we also watched Elisa Wallace’s mustang demonstration and my husband got his Mustang Adoption hat signed by her. She wished him luck with his Mustang. 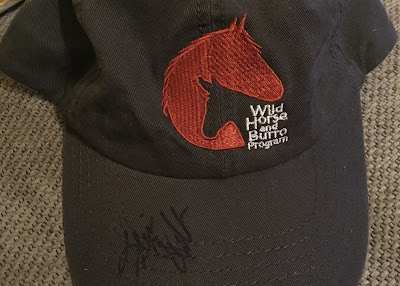 On Friday we watched more dressage and then walked the cross country course. We even got yelled at by Jim Wofford for walking on the course. We weren’t walking the whole thing, just cutting over at a place where there wasn’t a cross way, and I didn’t even see him until he yelled at us from across the field. Oops. Between walking from parking to the stadium, walking the course, and all around the event, we managed 8 miles. Rolex is exhausting.
But it was good to be exhausted as it helped us fall asleep early so we could get up at the butt crack of dawn to get to Rolex on Saturday. By the time we walked over from parking (about 7:10am) all the front row spots at the head of lake had already been claimed, so if you want to be there, you need to be standing at the gate at 7. Thankfully, we had Kentucky Club seats so we didn’t have to sit in the rain all day.
We did want to get there early to score a good seat in the tent and I think we got the best seats. Front row table with a view of 5, 6ab, 7ab, and 24abc. And we were right next to the tv with live coverage. 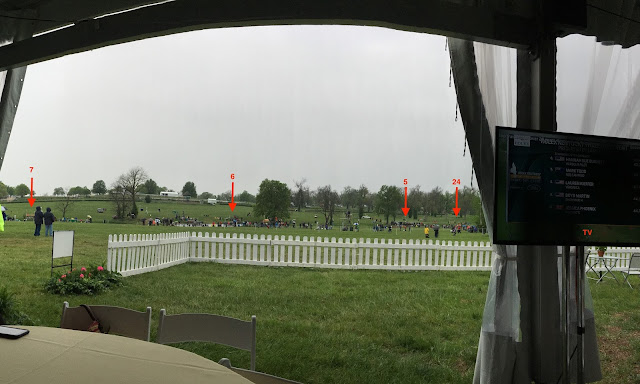 Annoyingly, people kept walking in and out right to the left of us and just stopping by the fence and standing there blocking the view. We also had several incidences where people would just walk up and stand in front of the TV. There were multiple rows of tables behind us and to the side of us so this would block a lot of people’s view and these people would get yelled at.
At one point this couple showed up and plopped themselves down in two chairs right in front of the TV and then proceeded to face each other and chat the entire time. If you don’t care about watching, MOVE. They weren’t actually in my way so I was ignoring them, but I could hear some of the people behind me bitching about them.
I’m going to use initials here as I don’t need this to show up in search results. When ML started her course, my husband made some comment about her. He really liked her horse S in the W who was euthanized after casting accident. I mentioned how I don’t really like ML because of her history of treating horses poorly (read the $900 fb pony’s post here). I got some dirty looks from the TV blockers at this, but wasn’t really paying attention.
Then ML’s horse fell and these people jumped up and were all over the TV. A bunch of people started yelling for them to sit down and I tapped her on the arm since I was nearby. She turned around and yelled at me “that’s our horse!” I was feeling a little more sympathetic, but the guy behind me was yelling at her that if they were so special she could go buy her own TV. I didn’t participate in the continued fight, but they eventually left and we were able to watch the TV again. I found it really interesting how as soon as ML was on her feet and went to get her horse, she immediately started undoing the horse’s weird double-chain noseband.  Long story, but that’s how I ended up getting yelled at by fancy horse owners.
I did walk out during a brief lessening of the rain to watch some xc up close: 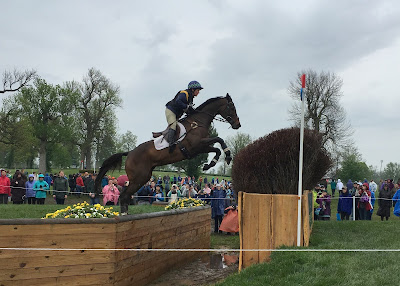 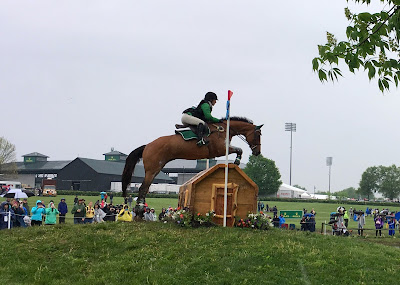 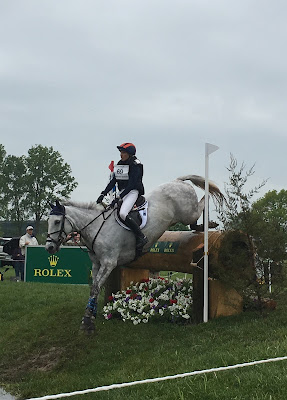 When Cross-Country was over, it was really fun to walk around and examine the jumps up close. They’re so much bigger than anything I’d ever want to jump. Even trying to climb up on them was difficult. 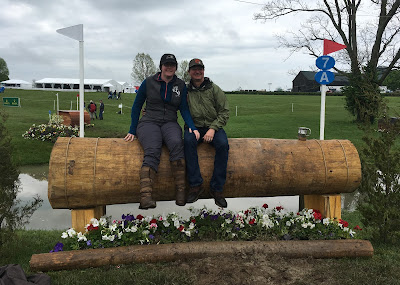 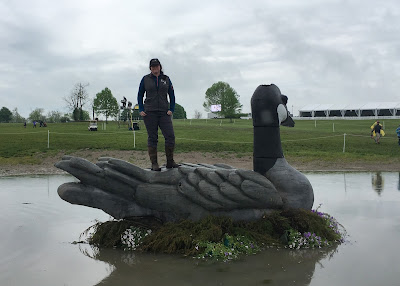 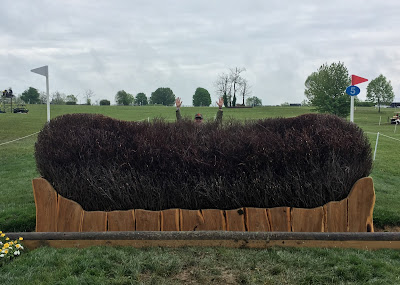 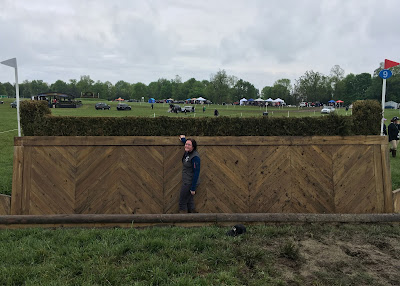 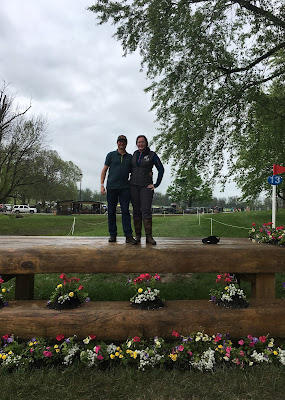 On Sunday, we had a lot of time before jumping started to continue shopping. There are so many weird/cool things that I’ve never seen before. I particularly wanted to buy this crazy sponge bit and see if Nilla would like it. But it was $100 so that seemed like a lot for an experiment. I’ll do a separate post on the stuff I actually bought, but it wasn’t that much. Some of the things that I saw and liked I’ll buy later as a lot of stuff wasn’t actually on sale, it was just there. 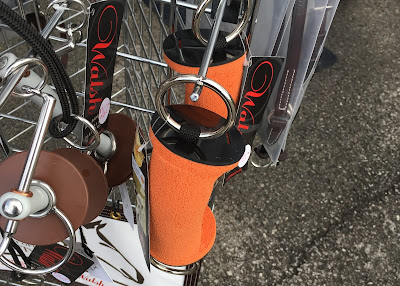 We watched the first half of stadium and it was a tough course with very few double clears. I was really sad to have to take off early, but our flight was at 5pm one hour away in Louisville. For someone like me who is paranoid about being early, even leaving at 2:30 was making me anxious. We ended up getting stuck in a nightmare of traffic when a sudden storm hit the highway and no one could see. There were wrecks everywhere and people who weren’t in wrecks were pulling off to the shoulder to wait it out. Parts of the highway were flooding and it was really, truly insane. And then we drove through it and it was over. Kentucky has some truly crazy weather. We made it to the airport about 15 minutes before boarding which was enough time to check our bag, skip the line with TSA pre-check, buy salads, and go to the bathroom. We really didn’t have a minute to spare. If we go again, I will definitely plan for more time before our flight out. I wish we could have stayed to see the top 20.

Overall though, Rolex was great. I hope we can go again next year, though I’m not sure if we will be able to. If you went, what was your favorite part? If you didn’t make it, did you watch from home?