On Saturday, Laura had me do all of the work with Nilla and helped me out with reminders. We started in the stall doing the neck lowering and bending exercises. Then we went up, groomed, tacked up and started lunging. The type of lunging Laura does isn’t to burn off energy, it’s all part of the training.

I worked with Nilla on flexing in and moving her shoulder. Laura watched me and reminded me of things I had forgot from the previous day. She also helped me refine my movements and really get Nilla to understand what I wanted.

Then Laura got on her to illustrate some of the things to do while riding her. She’s such a great rider so of course Nilla looked awesome. 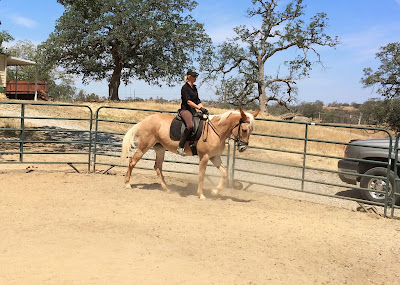 She couldn’t ride for long though as the saddle fitter was there to look at my new saddle. The fitter adjusted the tree and I hopped on Nilla and Laura made our saddle fitting into a lesson. Some of the main things I need to work on are keeping my hands down and actually keeping my leg on and behind me. My leg likes to be in chair seat and never touch below the knee. I 100% recognize that this is wrong and I know I need to change it, but it’s really hard to wipe out years of doing the wrong thing just because I know in my mind that it’s wrong. I need to rebuild muscle memory.

Hopefully this saddle will help me since I don’t have to fight it like my old one. The saddle fitter also thought it was a pretty good fit for Nilla. She was really striding out and swinging her back in it. We didn’t even need a special pad although I’ll have to keep an eye on it as the flocking settles since it is new. I also need to make some modifications to the saddle for my own fit that I’ll share in another post.

We did have a minor set back before I left in that Nilla had what really seemed like a panic attack. I had gotten off to set the saddle back a bit as it had slid forward when Nilla tripped and yanked me forward. I didn’t realize she’d tripped and thought she was reverting to her previous life of trying to yank the reins out of my hands so I yanked back. After I got off to reset the saddle, Nilla starting breathing really hard and foaming excessively in the mouth. She sounded like she couldn’t breathe and was throwing her head all over.

This also happened at the clinic, but Laura said she hadn’t done it at all with her. The saddle fitter thought the noseband and flash might be too low for Nilla. We took the bridle off, let her stand for a minute and she calmed down.  We put the bridle back on and pulled the noseband up a bit further. I hopped back on and she was fine. I kind of think she just had an emotional reaction to our yanking exchange and then got upset about the tight noseband. I don’t think the noseband caused it, but I will try to keep them higher up going forward.

At this point, it was nearly 1pm and I needed to get on the road so I could get back to home before it was late. I thanked Laura, gathered most of my stuff and loaded Nilla up on the trailer.

I am really, really grateful to Laura for everything she did for Nilla. Nilla is remarkable improved in such a short time. Laura also thinks Nilla has a lot of potential and really wants me to compete her. I am hoping to arrange something for the fall and winter to trailer out there a few times and get more instruction. Laura is also going to let me know if she’s in the bay area for a show. I am also hoping to send Nilla back to her in the winter. I would have left her for longer if it weren’t summer and time for good riding.

One thought on “Saturday Lesson with Laura”