On Sunday we were supposed to go on a docent led ride to an abandoned hot springs resort. The hot springs are in an area of a park that is generally off-limits, but they would open the gate just for this ride. Sounds awesome, right?

Nilla loaded onto the trailer just fine, but once we turned the truck on and moved slightly, she flipped out. Scrambling and kicking and trying to destroy the trailer or herself, whatever would get her out. When nothing was working, she decided lying down would be an acceptable way of getting out of the situation. She’s tried using laying down as an escape before (at the mule clinic) but she’s never tried it on the trailer.

And laying down is insanely dangerous on a trailer. Thankfully, she just sort of folded down and I was able to pull her halter and get her to stand up.

This isn’t a normal trailering problem: she’s totally calm while the trailer is still and she’s loading without a single issue. Since the issue is with movement, we tried keeping the side escape door open and drove down the driveway slowly with me walking beside the trailer. If she started flipping out, I’d smack her with the crop and she’d stop. I do believe there is an element of panic to her behavior, but the fact that she can be persuaded out of it means that part of it is just her being an asshole because she doesn’t like being on the trailer.

Since I can’t run next to the trailer while we’re driving down the highway, I cancelled our ride RSVP. However, I didn’t want her to win this round, so we drove to Rancho San Antonio, which is only a few miles from the barn. I usually leave her untied in the trailer, but I clipped her so she couldn’t lie down. She made it to the park on her feet though absolutely drenched and dripping sweat. I made her stay on the trailer and eat her morning hay there. She was fine except for occasionally tying to paw, but she quit it when I told her to stop.

We eventually tacked up and did a short ride through the park. We stopped at one point for my husband to use the bathrooms and I was holding Dijon who was really convinced I should be feeding him the treats he could smell in my pockets. 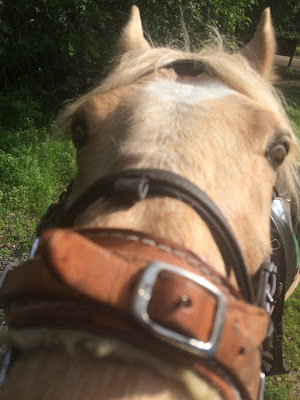 We ended up talking to a woman who had just moved to the area and was looking for a barn so she could bring her horses down from Washington. We commiserated on the misery of trying to find a barn with real turnout in the bay area. After giving her my contact information, we rode up to the viewpoint. The weather was gorgeous and we could see across the bay. 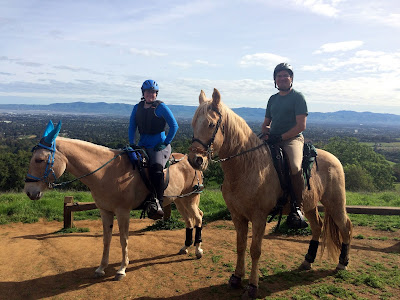 The ponies got a chance to eat some of the lush green grass at the viewpoint. If you look closely, you can see where Nilla has ripped chunks of hair and skin off around her eye and hip. 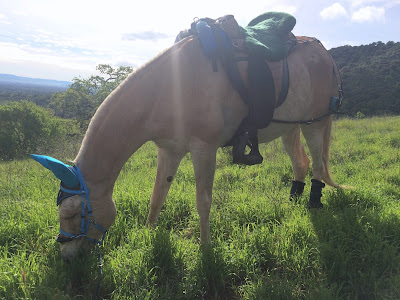 I’m not sure why, but we always get a lot of attention at this park. Most of the other parks we ride at we get a few people who are excited or annoyed to see horses, but it’s not a lot. The people at this park just go nuts about horses. We actually used to board within walking distance of this park and ride here all the time. I had even thought of getting business cards with my info to have people send me their pictures as we will end up having tons of pictures taken on any given day.

Don’t believe me? Here’s Dijon being adored by the public. 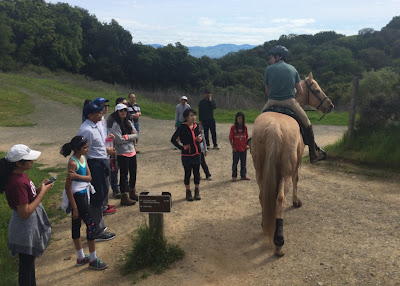 We got back to the trailer, untacked, and loaded up just fine. As we were driving back, I could hear Nilla thrashing around so I had my husband pull over and I went to check on her. She had managed to  pull her head out of her halter and laid down again. I yelled at her, she got up, and I put her halter back on as tight as it would go.

We stopped again a few miles later (the park and our barn are only like 5 miles apart so this is really an excessive amount of stopping) and I went to check on her. She had pulled out of the halter and laid down again and now she was on her side and cast against the wall of the trailer.

There wasn’t really anything we could do on the side of the road so we got back in the truck and drove the remaining mile to the barn. I went to get her halter on while my husband unloaded Dijon. When I first opened the door, she threw her head towards me and made a little whinny/nickering sort of noise like omg, save me. As I was working to get her halter on, she tried getting up a few times and couldn’t because she was stuck sideways in between the center divider and the side wall of the trailer. When she realized she was stuck, she let out this huge, long moan and just laid her head down on the floor and gave up.

Thankfully, my husband was able to get Dijon off and then pull the center divider pin and swing it to the side. With the extra space, she quickly pulled herself to her feet and I backed her off.

Shockingly, she didn’t have any obvious injuries. She had some small scrapes, but nothing as bad as I would have thought for being cast in a trailer. I forced her to trot around and she was sound. I do think she wrenched out her back though as she was holding it humped up a bit. I’m going to have the Chiro come out again and look at her.

That’s short term though. Long term, I don’t really know what we’re going to do. I don’t want to own a horse/mule that can’t be trailered anywhere. It’s not just about showing either. My husband and I like to go trail riding and camping. If we can’t get her over this, I won’t keep her. I’m not giving up yet though. We need to see if she’ll trailer by herself without the histrionics. She was trailering fine by herself, but her trailering issues are progressing so I don’t know if that’s still the case. We’re also going to try borrowing a slant-load and see if that helps her.

As for drugs, she was on 10 ccs (this is not a typo, I do mean ten ccs per my vet’s recommendation) of Ace and a whole tube of B-calm. I am going to see if the vet will give me Dormosedan to try since she seems to be immune to Ace, but I have my concerns about her being sedated while trailering, especially if she’s already willing to lie down.

This isn’t something that can be solved by teaching her the trailer is an okay place to be. She’ll load fine and stay on it just fine so long as it’s not moving. So the usual training tricks of feeding her on the trailer or practicing loading won’t help. And I can’t really take her on even short trips to get her over it if she’s going to cast herself. It’s way too dangerous. I’ll be happy to send her to a trainer if I can find a trainer who knows how to solve this.

Like I said, I’m not giving up on her yet, but right now I’m sick and tired of this behavior. And I’m kinda sick and tired of her. I’ve been to the barn to feed her and trot her around bit in the arena to check her soundness, but I haven’t spent any real time with her and I don’t really want to right now.

I should have an update on Eugene coming soon, but aside from that I will probably not be posting much for right now. I just don’t feel like I have anything positive to say. I hope readers will bear with me for now.