This weekend my husband and I both competed at The Spring Event at Woodside. This was my husband’s first move up to Novice and my first rated BN. To keep this post from being too long I’m going to do a separate post about just how terribly organized and managed the lead up to this event was. It was so bad, we’ve decided to not attend any future events run by this group. The Woodside events are always lacking in parking and this time around we were warned it would be even worse. That warning, combined with the chaos generated by the organizers, had me hauling the horses over Thursday morning to despite living 15 minutes away from the horse park and not riding until Friday at 4pm.

I raced to set the ponies up in their stalls, unload the trailer, then scavenged one of the few remaining parking spots (even though I was super early) and raced back home to attend a requisite training session for work. Once that ended, I hurried back to the park to meet Kate for a lesson. But Kate was having an even more stressful day than me and didn’t get there for quite a while so I hung out with the ponies and eventually my husband arrived after work.

It had been off and on drizzling/threatening to rain all day and the air was thick with moisture so we kept the lesson pretty short as we were both getting sweaty fast. Levi was pretty good and we were getting our leads. We did have several temper tantrums – on both of our parts – but ended on a good note. Then I dragged him off to have a bath and the weather decided to take a turn for cold and rainy again so the poor pony got a cold bath in the cold, before getting put away in his BOT sheet.

The next morning I went to the horse park early to feed the ponies while my husband went to work. One of us needs to pay for all this horse showing. I managed to get the horses braided, but my back was killing me so they didn’t get a walk. I spent most of the morning sitting in the tack stall watching the rain. I have to say, I was initially opposed to paying for a tack stall because I’m a cheapskate, but my husband wanted it and we ended up splitting the cost with 2 other people so it wasn’t that bad. In addition to the convenient storage, having a place to hide from the rain was totally worth it. 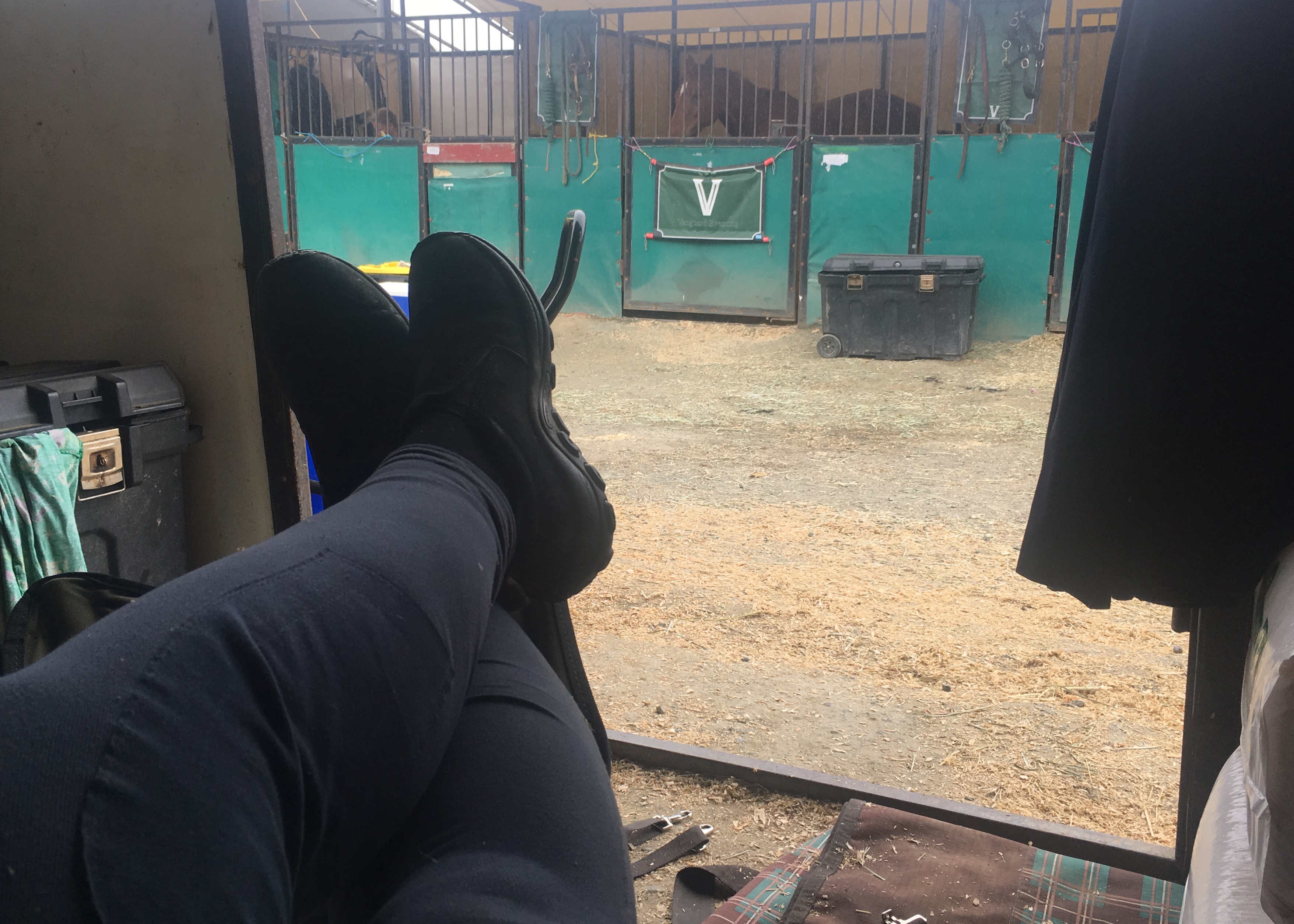 I eventually wandered over to the show chiropractor who does people in addition to horses. She was partnered up with the Bemer rep so I got an adjustment and a Bemer session. My husband showed up at that point and just happened to walk past me on his way to the barn and was like what the hell happened to you. My back does not like horse shows. I think it’s the unloading the horse trailer and all the standing around, but I don’t know for sure. The Bemer rep was nice enough to come over and give the horses a free session as well after my adjustment. Last year, Eugene absolutely loved the Bemer session. This year, he was a bit hyped and wanted to walk off. Levi seemed to enjoy it though. I wish I could afford one.

Unfortunately, my husband and I had very close times. He went at 4:18 and I was at 4:26. We were also in different rings a few minutes walk away from each other so we couldn’t safely warm up together. I checked in at my ring and then went to watch some of my husband’s warm up before I wished him luck and left to do my own warm up. Since I wasn’t able to watch the test, I didn’t get any pictures, but thankfully, one of Kate’s kids was nice enough to take some pictures of them. 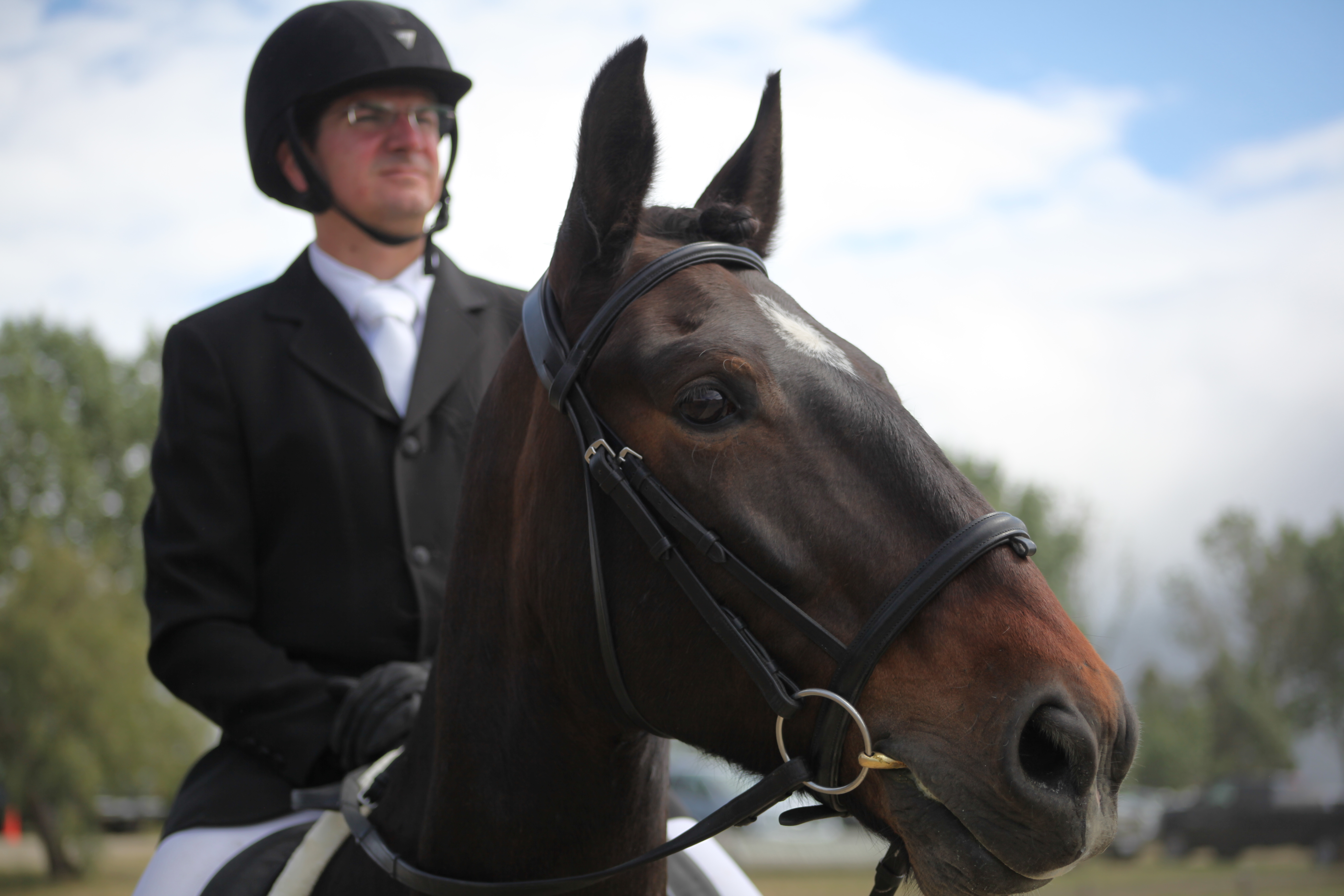 I didn’t see him again until after my test and when I asked how it went, he was pretty upset. Apparently they once again got the wrong lead going to the left. I asked if he fixed it and he said no because he didn’t realize until it was too late. 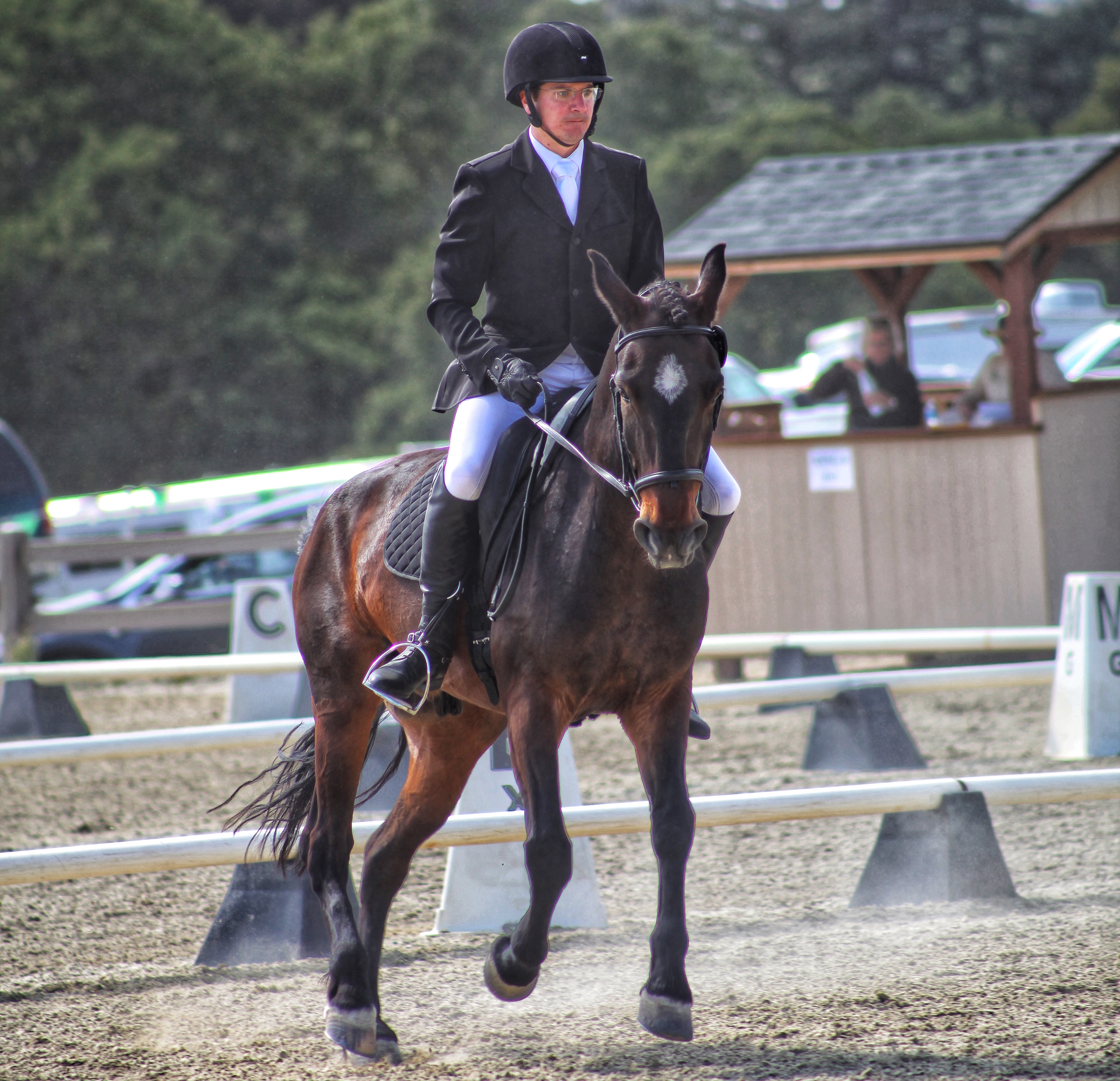 Then he misheard the whistle in the ring next to his, thought he was being whistled for an error and came to a stop. When he realized the whistle wasn’t for him, he got confused about where he was in the test and had an error of course.  He was so upset about the test, I assumed he hadn’t done very well, but they ended up getting a 40.7. I know it’s not a great score, but they’ve only ever been under 40 once at BN. Getting a 40 at their first Novice even with an error is pretty good. They were 12th out of 17 in their Novice Rider division. Pretty freaking awesome! 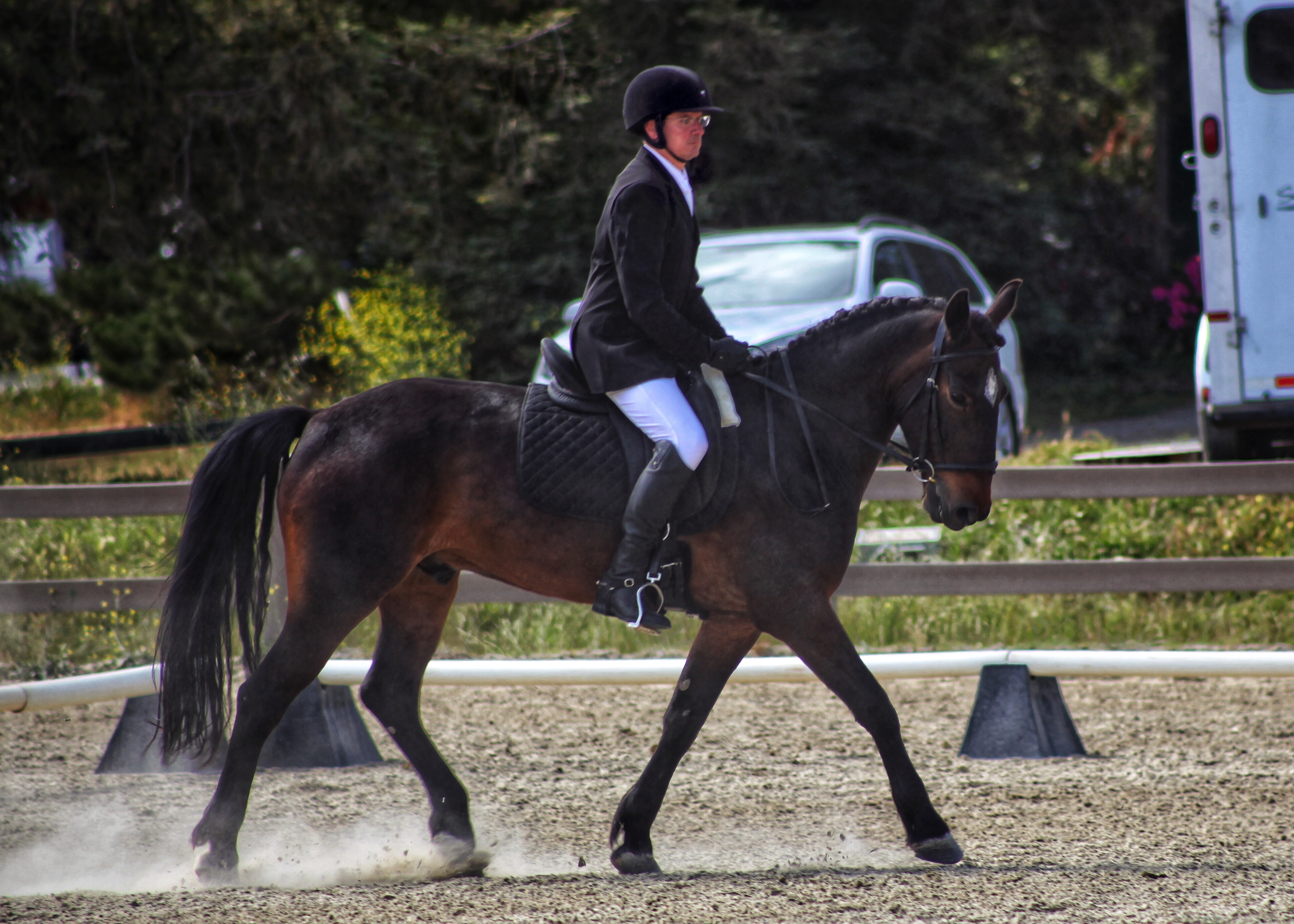 While all that was happening, I was warming Levi up. He felt completely behind my leg and lacking in energy. Every time I got after him about the need for forward movement, he would break into canter. Ugh. With hindsight being 20/20, I really should have just gotten after him with the whip and got him moving. Instead I tried to back off and not push him. That didn’t really work out.

My husband wasn’t able to take pictures of me, but Kate took a few with her cell phone. 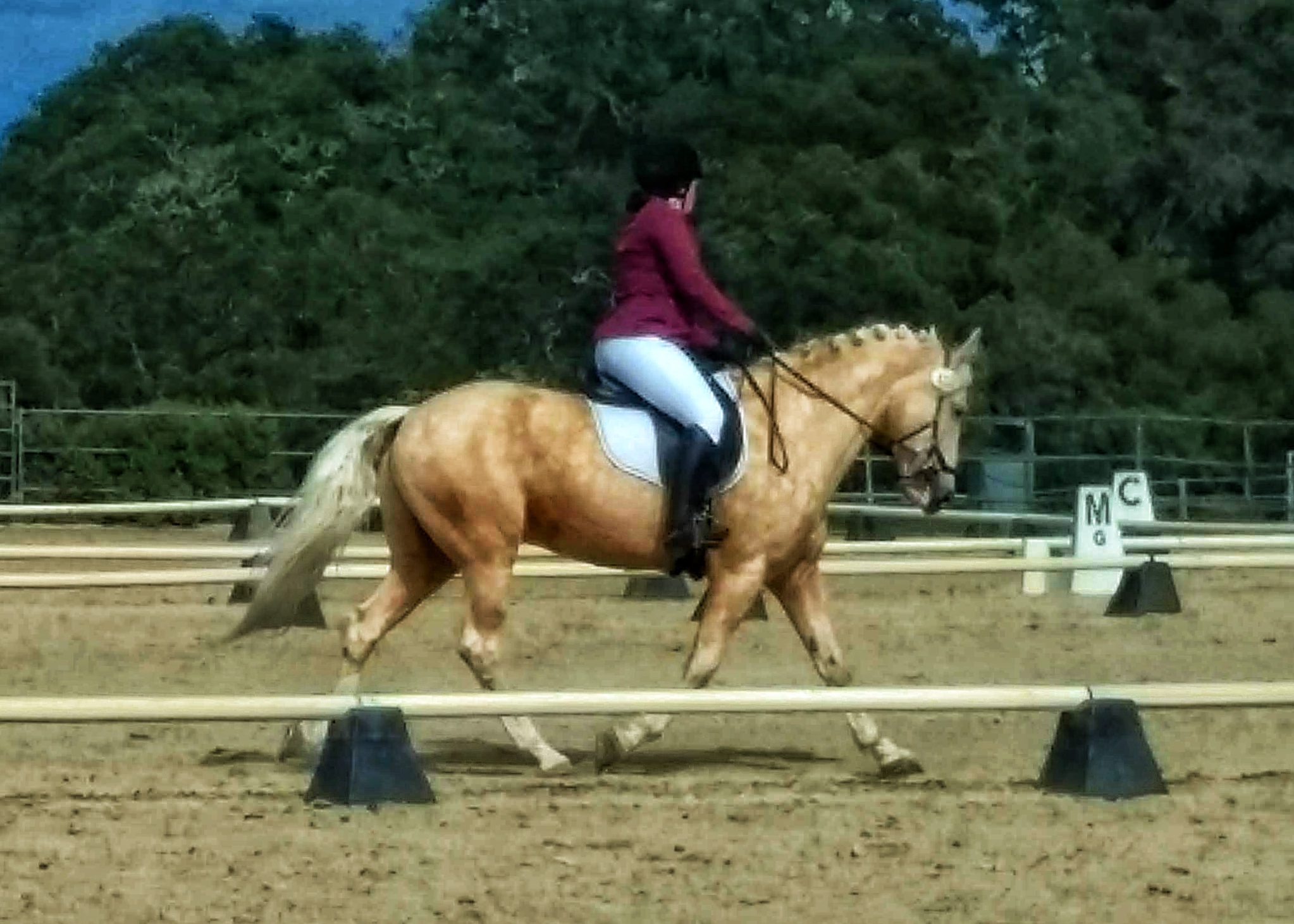 super zoomed in and blurry, but evidence

It was a pretty miserable test. I think the judge was overly generous in scoring. While I was taking care of Levi afterwards, my husband looked up the scores online and told me I got a 38.6 and I asked if he thought the judge maybe had a seizure during my test. Levi broke to canter 3 times during the trot work and tried to trot once during walk. We didn’t deserve a 38.

I thought maybe the judge just missed the breaks of gate, but she was just generous about them. The judge’s comment on the one break to canter was “tense, looses rhythm at E.” We also got “tense at C” for trying to trot during the medium walk. 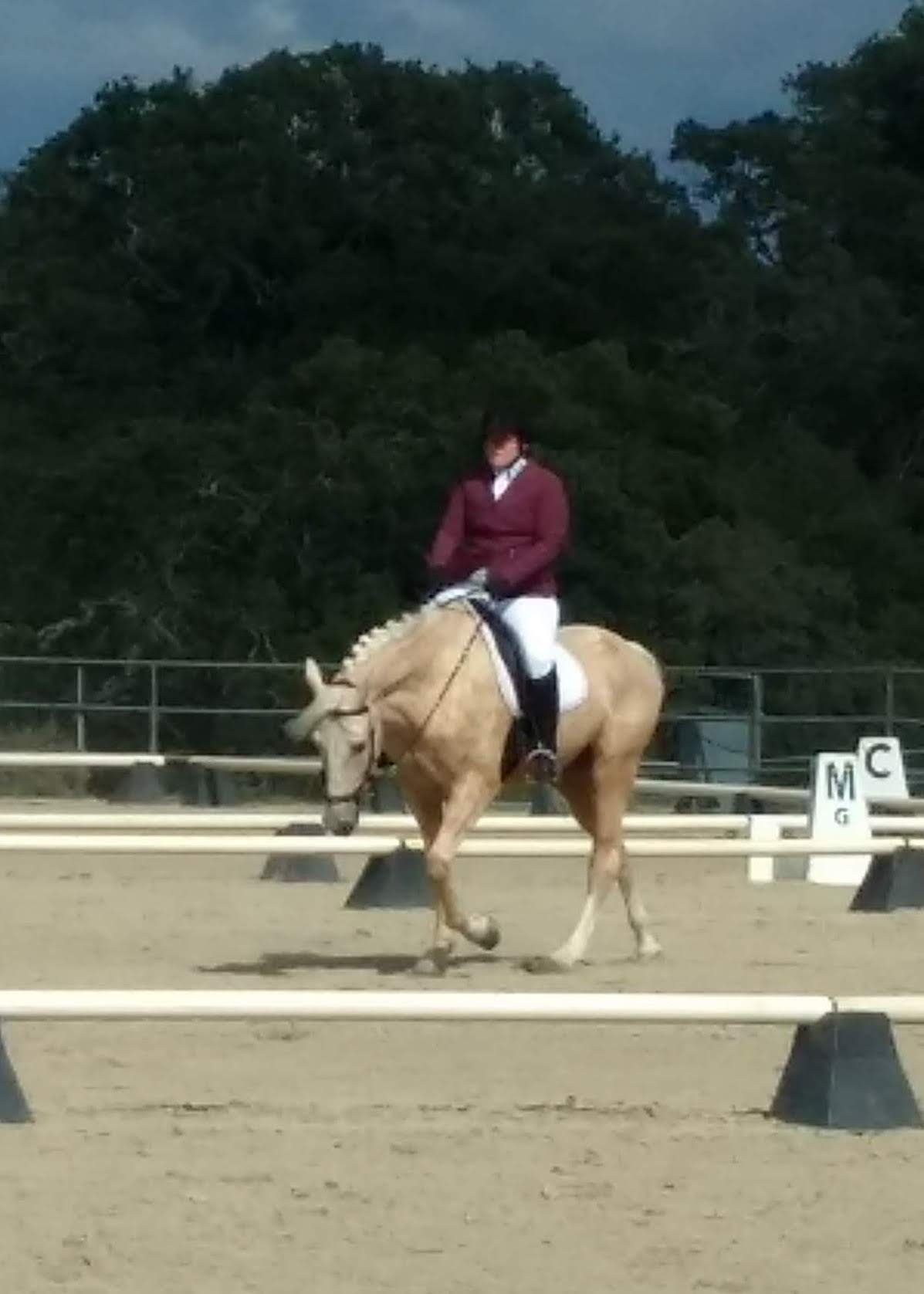 On the positive side, we did get both leads correct so it wasn’t our worst test ever. We were miraculously not in last place either – though not far from it – at 16th out of 20. Stay tuned for the fun times in stadium tomorrow.

14 thoughts on “The Spring Event at Woodside – Dressage”