Fortunately (??) the torn tendon is mine and not one of the horses. A few weeks ago my arm starting hurting. It was really only when I was doing something active with the elbow. Like fencing or lifting heavy things. So I stopped doing those things. But the pain kept getting worse until I reached a stage where even doing nothing caused a general ache and doing even simple things like brushing my teeth caused seeing agony.

So I finally dragged myself to the doctor and found out that I have insidious lateral epicondylitis. Which sounds really bad, but is actually just tennis elbow of unknown origin. Despite the name, my physical therapist said about 90% of people who get tennis elbow don’t play tennis. It’s possible that I got it from fencing, but it’s also possible that I got it from riding. Either way I’m not allowed to do those activities for a while. Well, to be more specific, I can ride, but I cannot use my right arm.

Do you know what you need two arms for? Dressage.

I suppose I could take up western dressage, but I really don’t want to; it just doesn’t appeal to me. And Nilla doesn’t know how to properly neck rein anyway.

I already had to cancel my lessons. I’ve gone back to trail riding, but even that is really difficult to do one handed. Nilla sort of neck-reins in that I can maneuver her around with one hand and a lot of leg pressure. The hardest part is that I constantly revert to using my right arm. I tell myself I’m only going to use my left arm and then…

I don’t even realize I’m doing it.

My Doctor and Physical Therapist both work with local professional athletes so they know what they’re doing and they’re used to crazy people wanting to keep doing things despite having injuries (these same people helped me go from breaking almost every bone in my back to a pack trip through the Sierras in a little less than 8 weeks). So they’ve both said I can ride and I can use my right arm if I need to, it’ll just slow down the healing.

But I can’t do any of the training I should be doing to accomplish the goals I have this year. And I’m generally just really tired of things going wrong. So I’m having a bit of a pity party for myself right now.

On the plus side I did got this cool ion battery-powered steroid injection patch for my elbow. This is the future here people. I am the bionic woman. Well, at least I am for a few hours before I have to take it off. 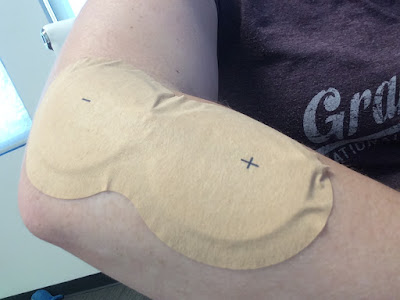