About a week ago, I was looking at places to camp and found that there was a cancellation at the Tuolumne Horse Camp in Yosemite National Park. It was only for 2 nights, which is pretty short with how long the drive is to get there, but we figured it’d be worth it. In order to not make this post too long, I’m going to divide it into two. Today’s post is about our Sunday ride to Glen Aulin. 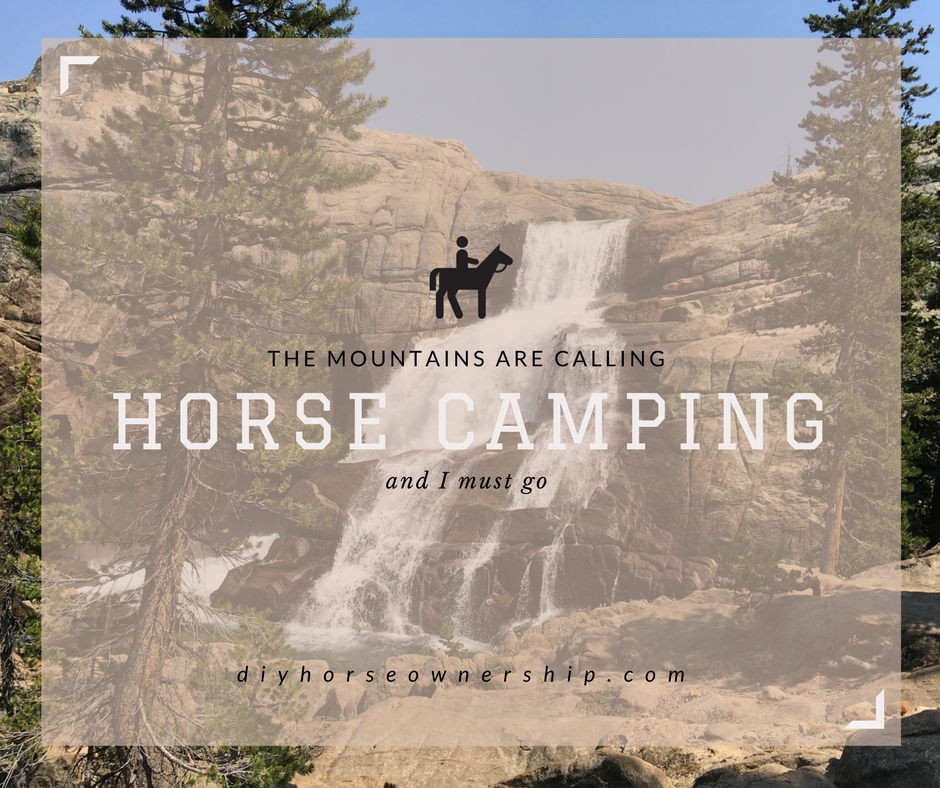 On Sunday, we planned to ride to the Glen Aulin High Sierra Camp. This is a tent camp where people can ride or hike in and spend the night. Dinner, breakfast, a tent, some blankets, and other amenities are included, which can make for an easier overnight for less serious backpackers. The trip in was about 6 miles with only 850 feet of elevation loss, so it was also a rather moderate ride. We didn’t want to do anything too strenuous as our horses live at sea level and the campground was at 8,500′.

We started off on the trail connecting the campground to Tuolumne Meadows. As we were nearing the visitor’s center, there was a little bridge we had to cross, which Nilla objected to. I sat and waited it out and she eventually jumped onto it and took off across it. This was really just a portent of what was to come.

As we neared Soda Springs, there was a large bridge we had to cross. We arrived at the same time as a huge string of mules going on a pack trip in the opposite direction. It was a really cool group as it was made up entirely of mules. 2 guides, 5 pack mules, and about 10 guests all on mules. Not a single horse among them. My husband walked Eugene across and then Nilla lost her mind. I got off and tried to walk her across and she decided to rear and try to bolt. Thankfully I held on to her as I’m pretty sure she’d have been long gone otherwise. The mule string eventually crossed the bridge and as they were passing us, the one guide complimented us saying “that’s a nice looking mule you have there.” My response was “she’d look a lot better on the other side of that bridge.” Apparently this was such a great comment that it spread. By the time we returned to our campground, one of our neighbors came over to say he’d heard about it. 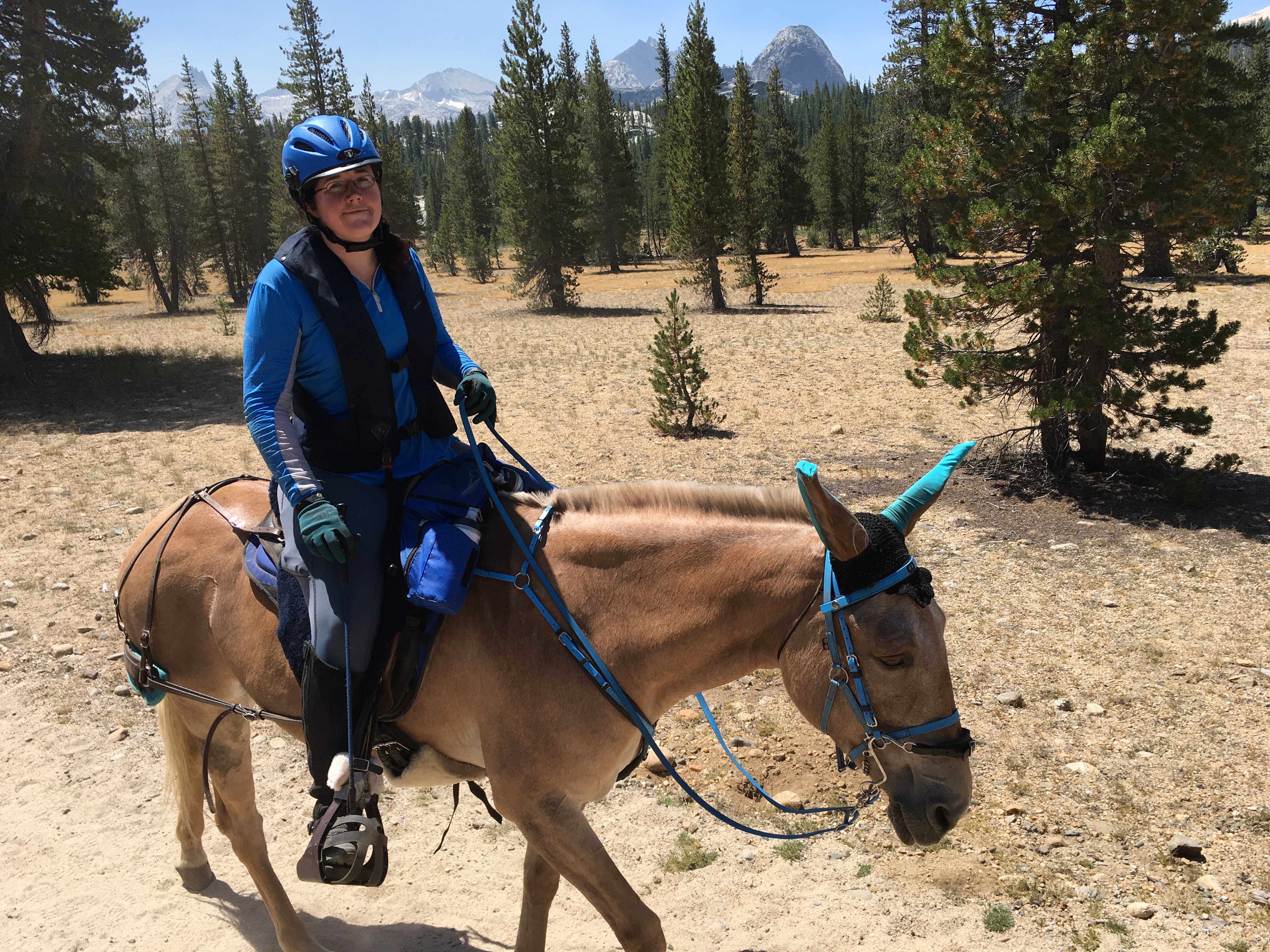 Anyway, my husband came back over and led Nilla while I chased her with the crop and we got her over the damned bridge. After Soda Springs, the trail is basically level and meanders through the a mix of pine trees and granite outcrops following the Tuolumne River. We crossed a creek and the ponies drank a ton. 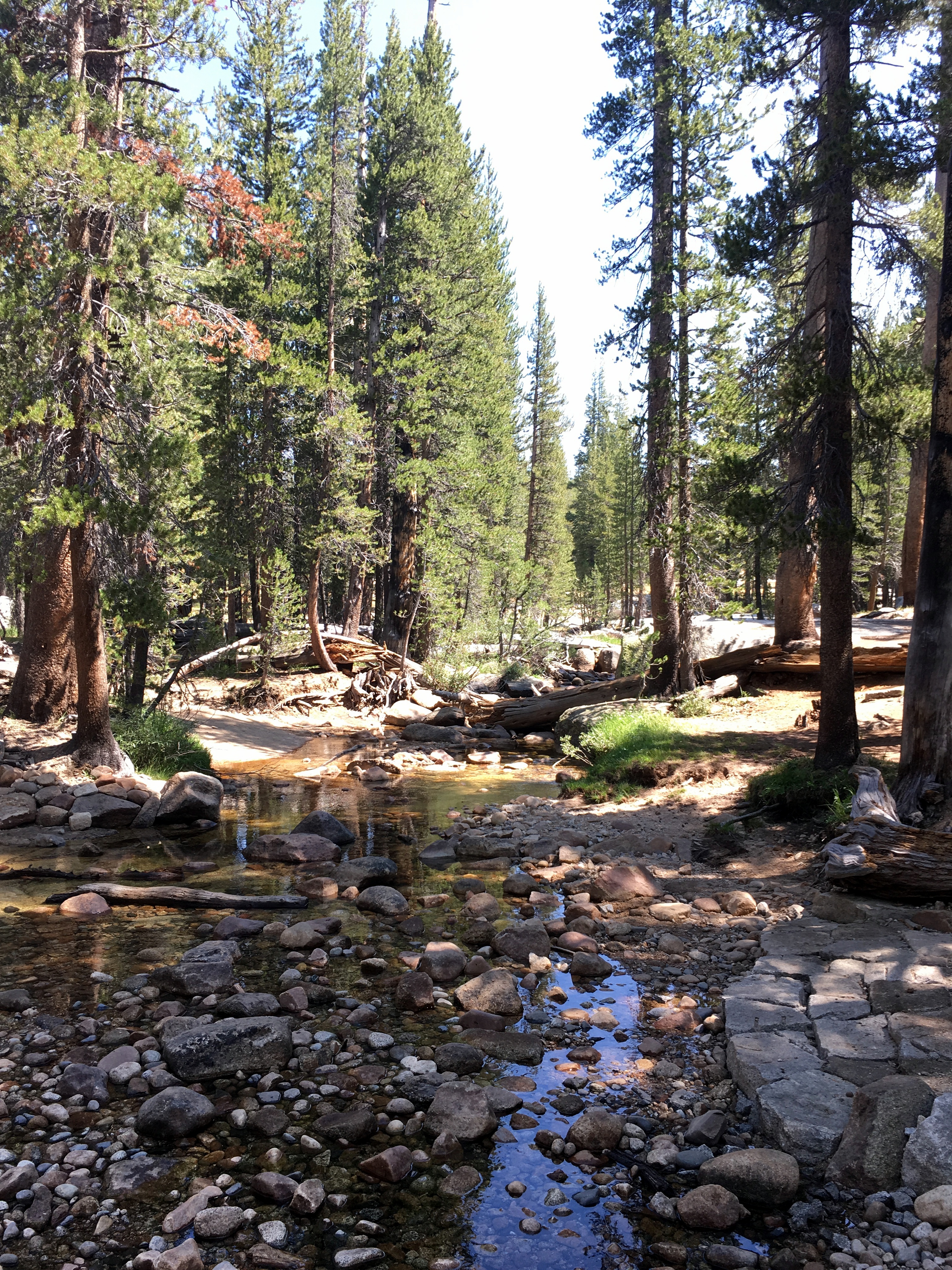 The terrain was nice and easy for the first 4 miles and then we started going downhill. I knew in advance that all of the descent took place over the last mile, but I was unprepared for just how terrible that descent would be. This was not the gradual switchbacks on dirt footing we were used to. No, it was stairs cut into the granite, or worse, cobblestone ramps with no decent foothold for the horses. In some sections the trail just goes across solid slabs of granite. 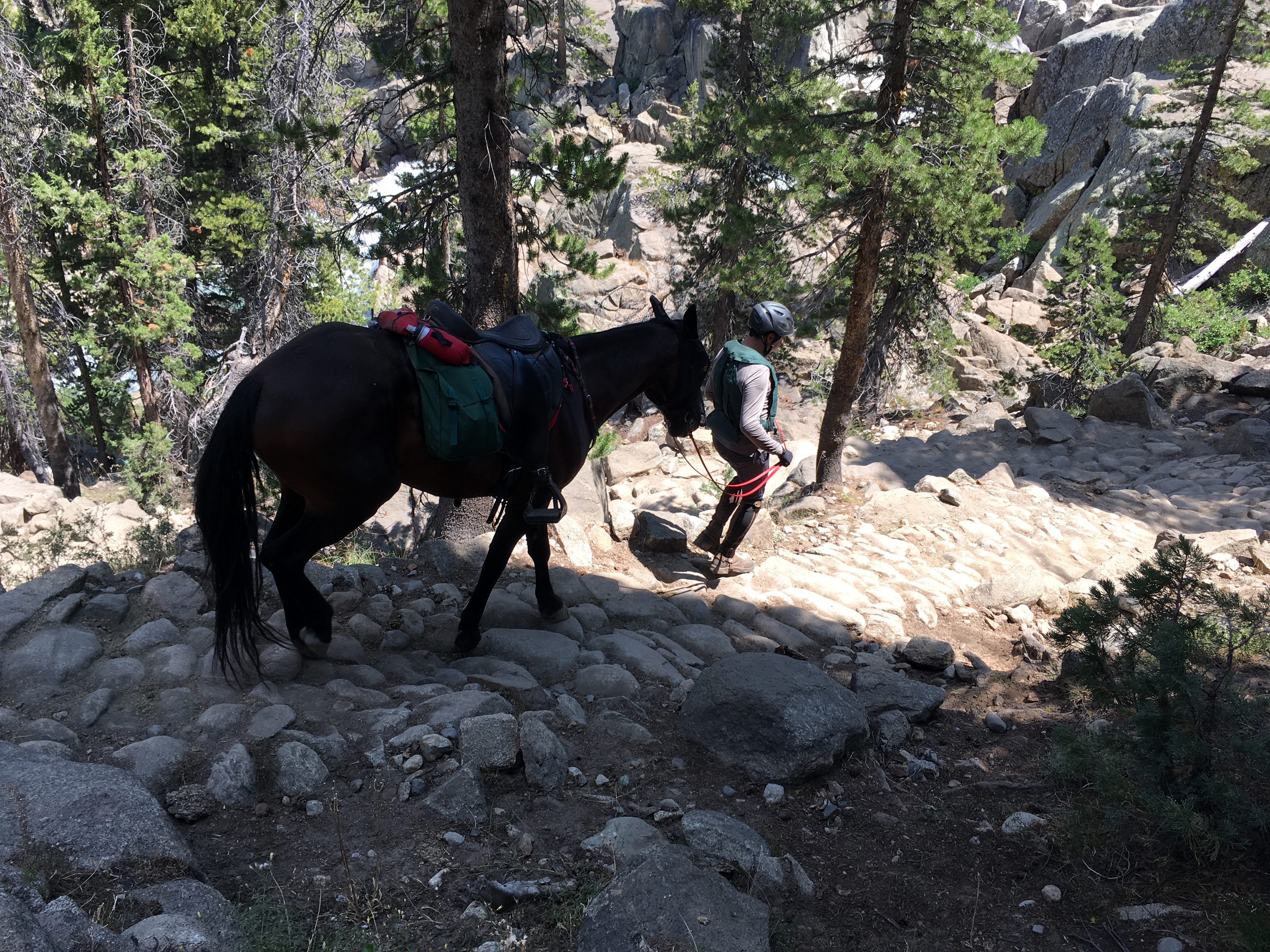 Since I didn’t want to die, we basically ended up walking most of that last mile. There were a few sections we rode through, but Nilla was convinced she could make better decisions that me and kept going off trail or trying to run down the steep sections. 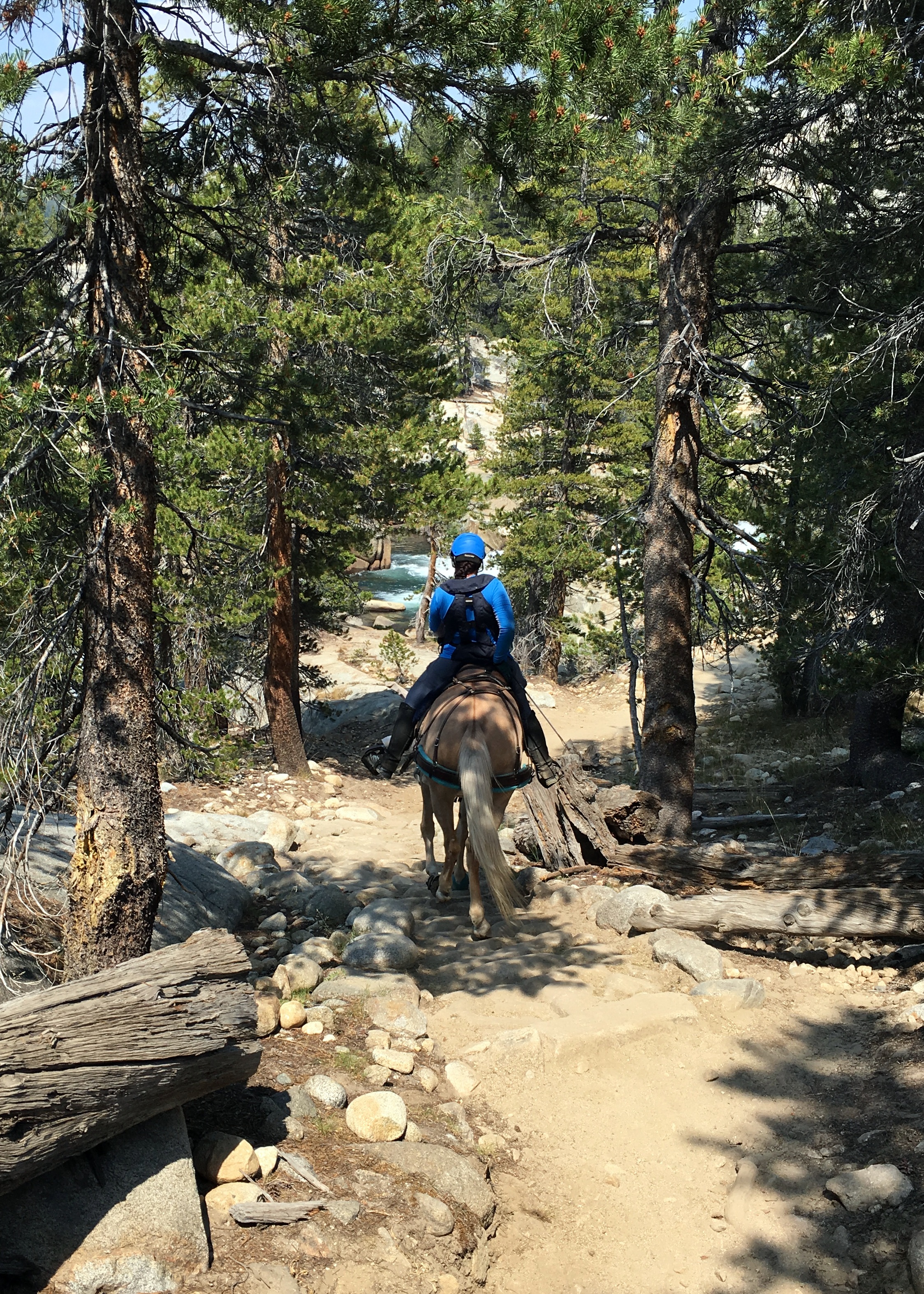 It was a gorgeous trail though. As we followed the river, we got to see all the waterfalls crashing down beside us. We even cross a twin bridge over the river, although I did have to get off and lead Nilla across as she was not as appreciative of the bridge’s beauty as I was. 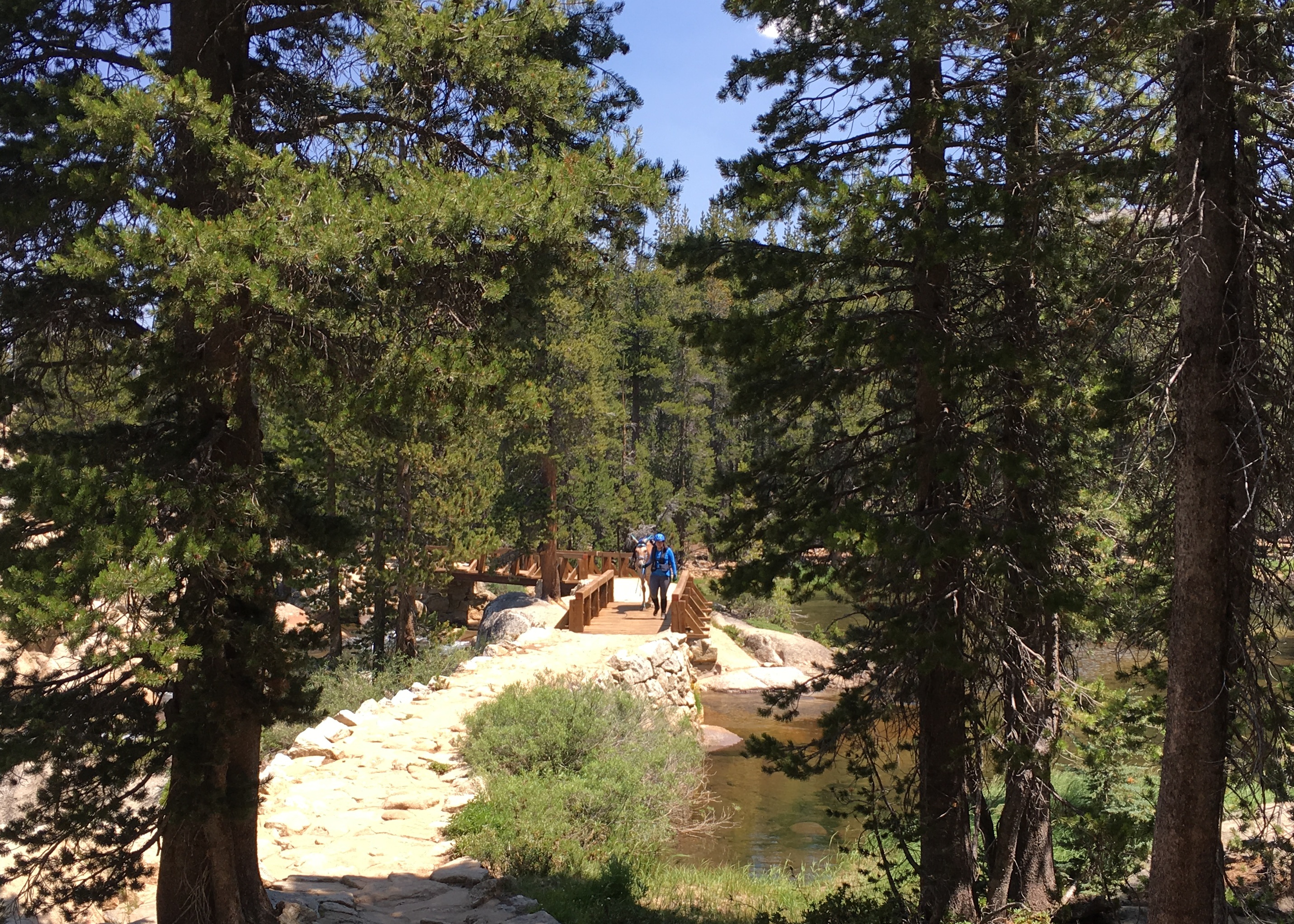 As challenging as the trail was, it was all worth it when we finally arrived at Glen Aulin and saw this: 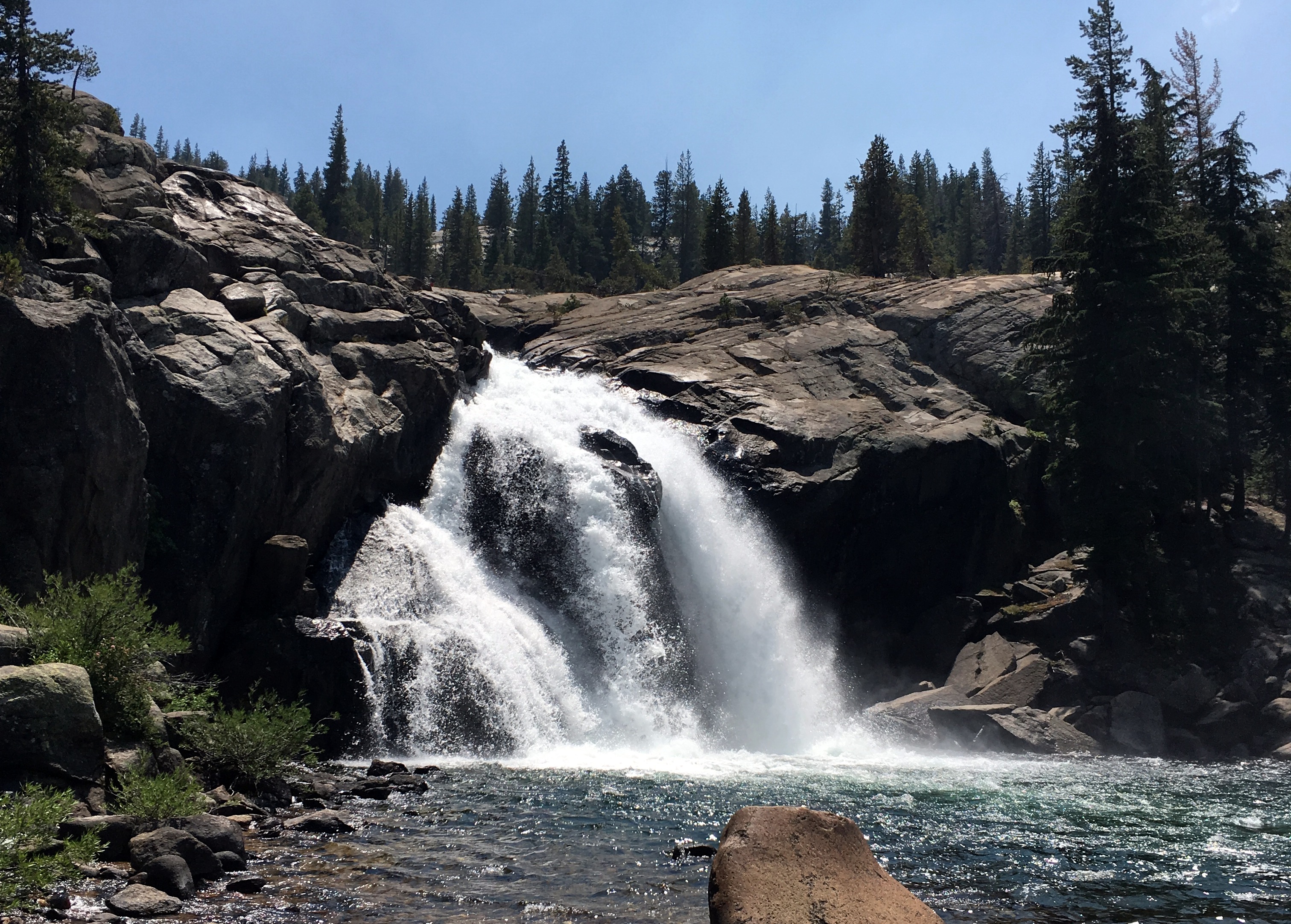 Since the camp is serviced by pack trains, they were set up with hitching posts. We untacked the ponies and let them roll in the soft dirt. One of the camp workers even offered to bring them some carrots. They loved it. 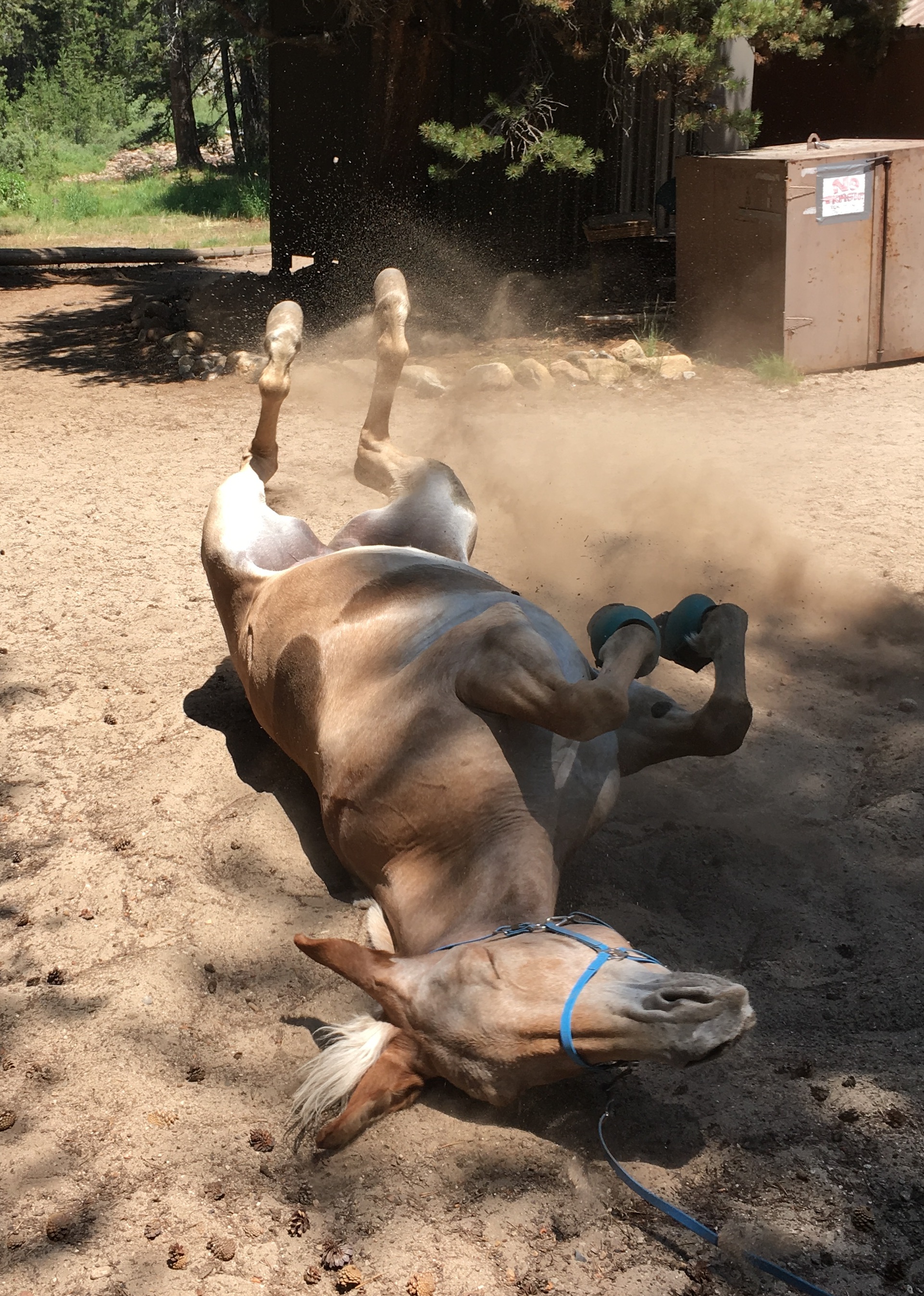 We ate lunch sitting by the waterfall and then we changed into our bathing suits and went swimming. 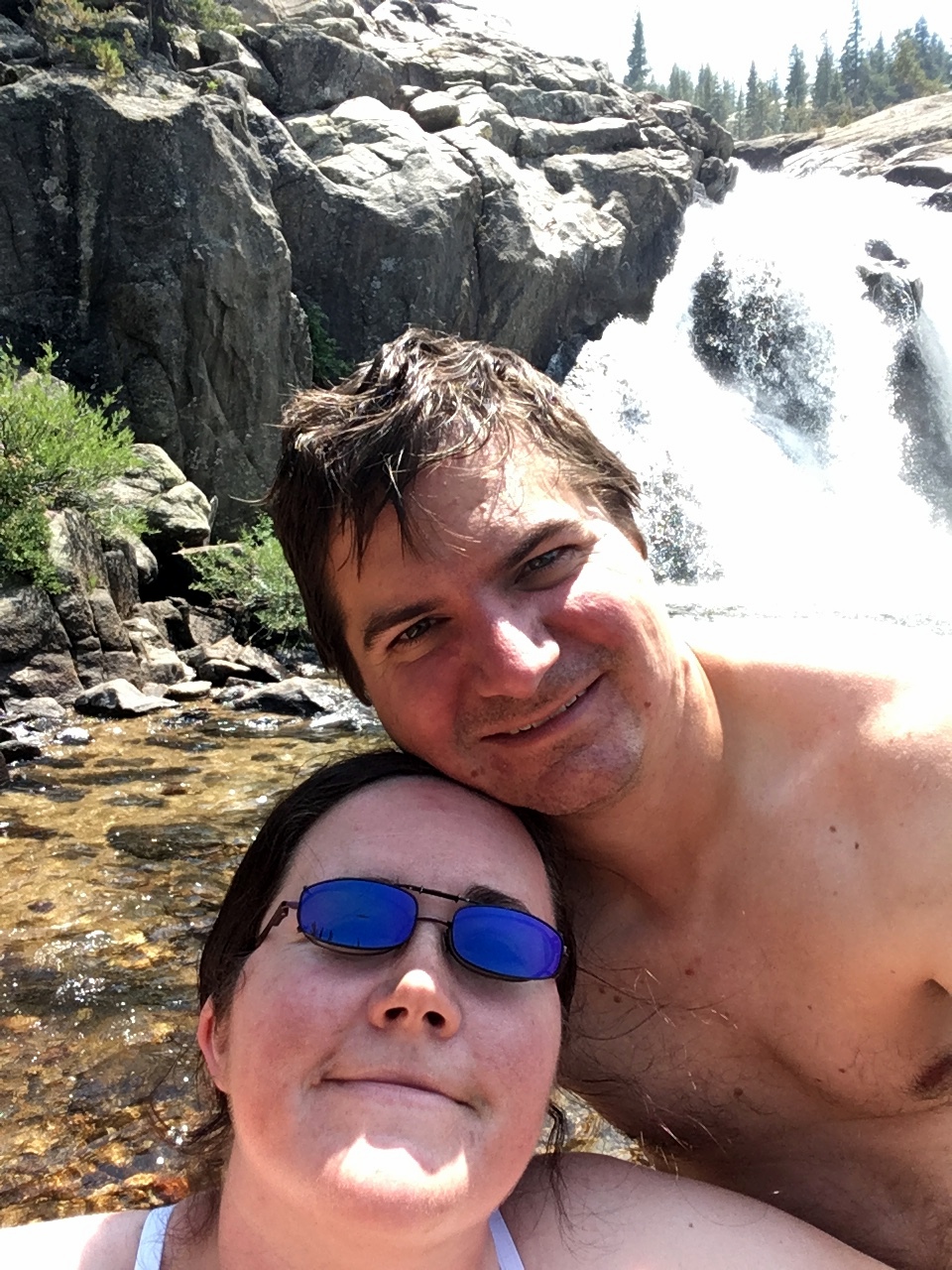 Well, to be honest, my husband went swimming and I got my legs wet. It was just too cold for me. The water was crystal clear and absolutely stunning. 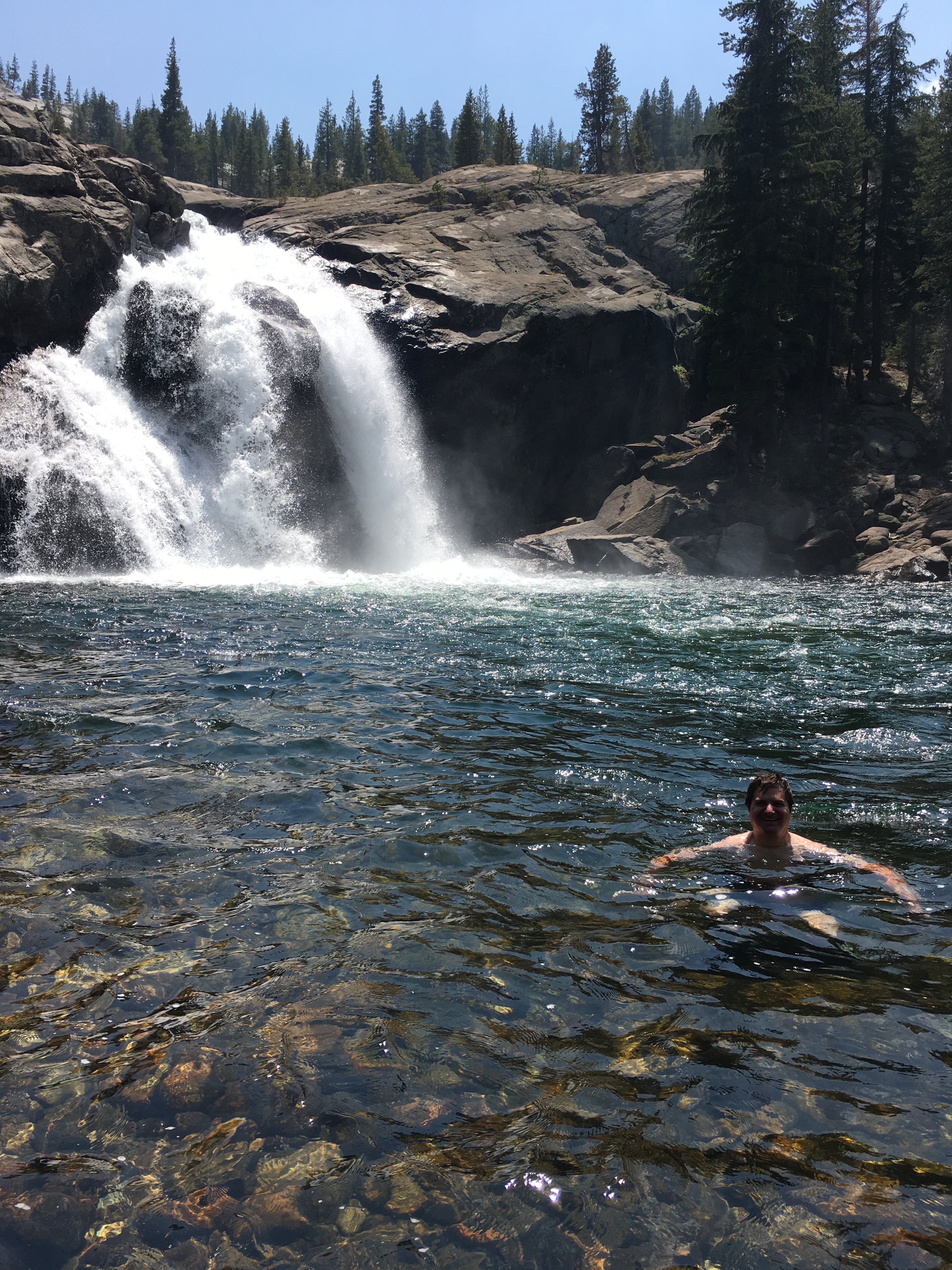 As amazing as it was to relax by the side of the waterfall, eventually we had to change again and head back. The return ride was much faster. Nilla was in her element; she was just flying up the stairs and cobblestones like it was no big deal. 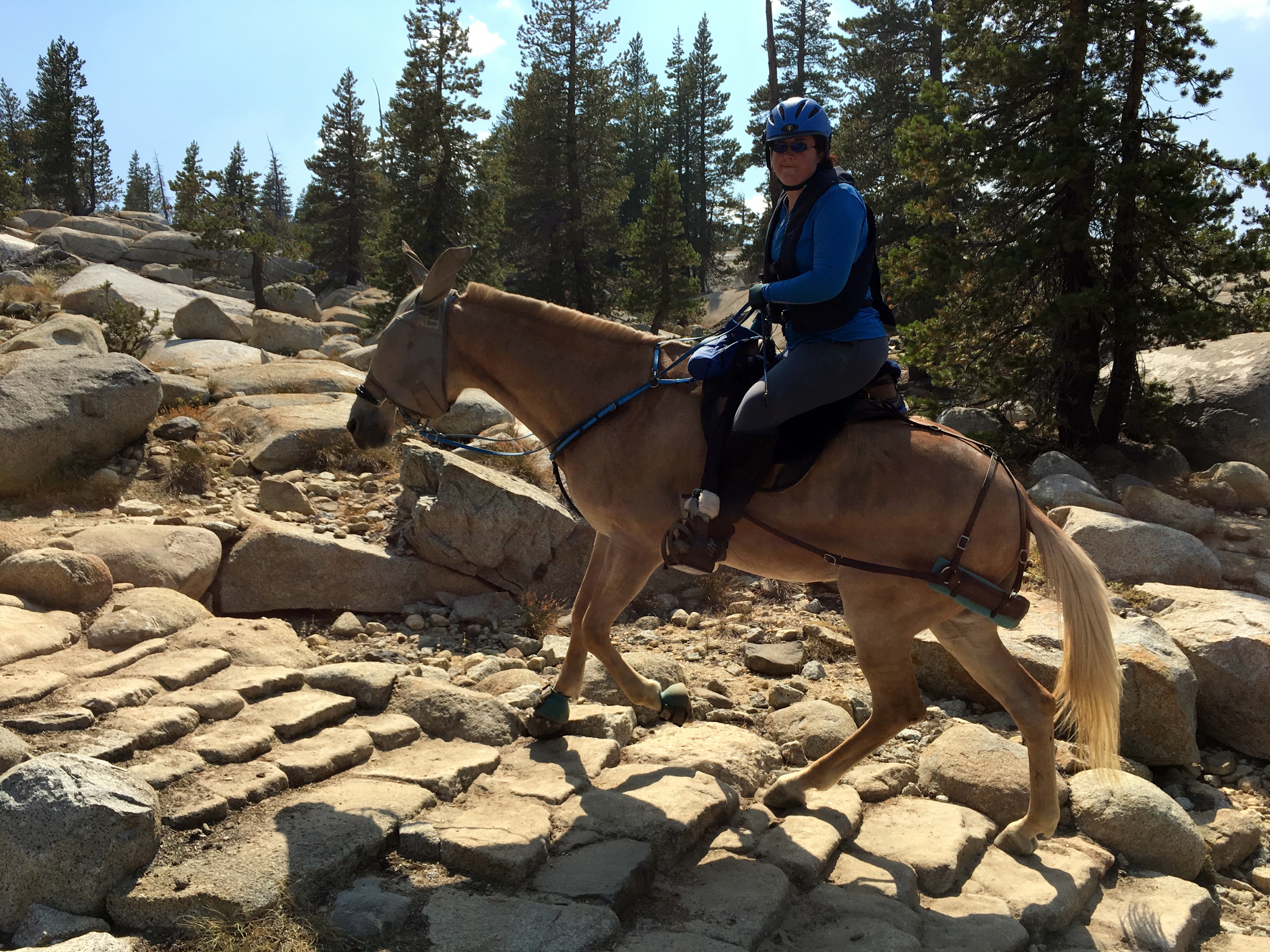 I think the pictures don’t really do justice to just how steep these trails were. Of course, I also wasn’t taking pictures along the really steep sections. 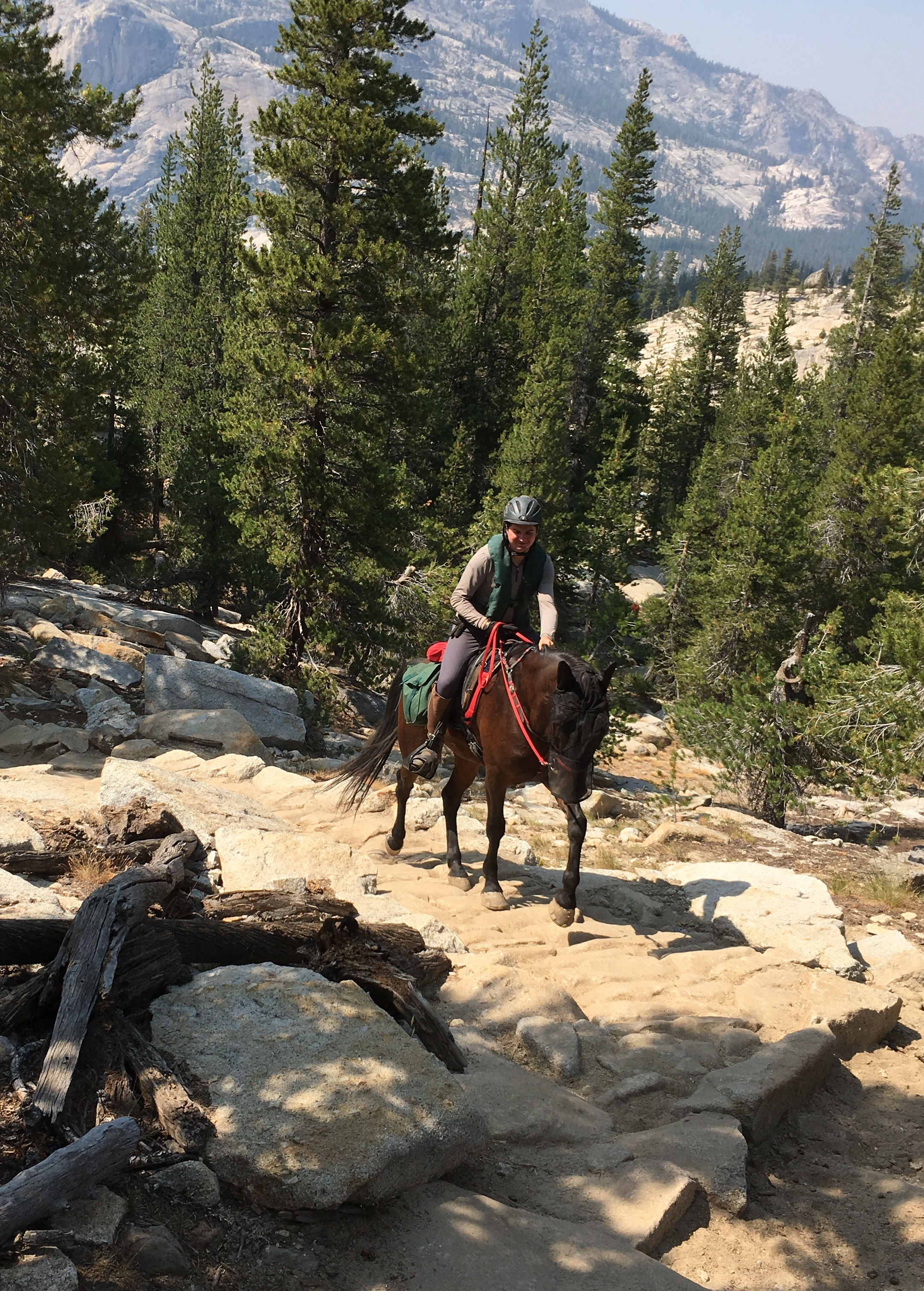 Thank cod for sure-footed mules and Mustangs. I would not want to do this trail with just any horse.

The views on the return trip were even better as we were facing the waterfalls. 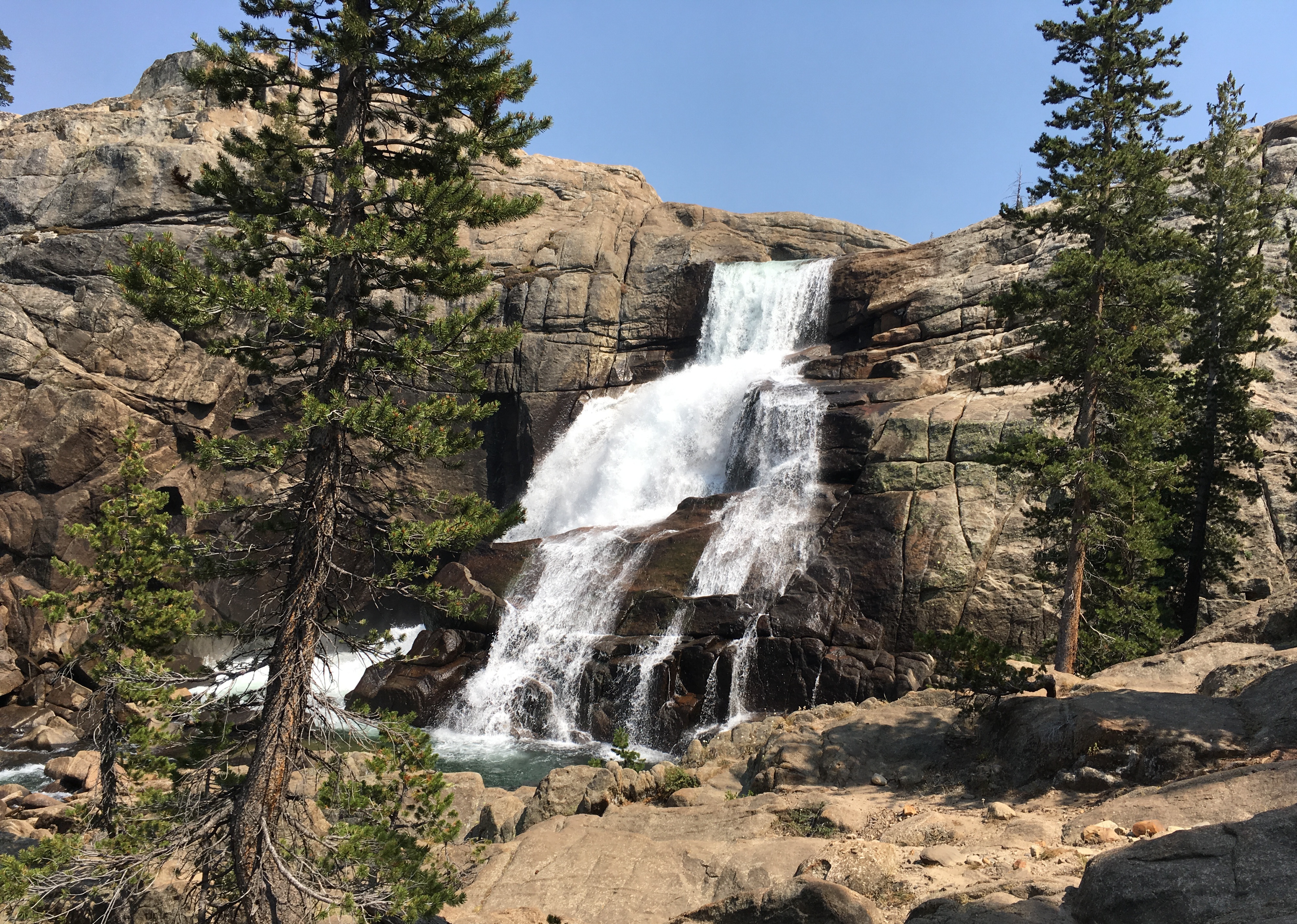 We also stopped along the way to admire the scenery. Yosemite is simply gorgeous. 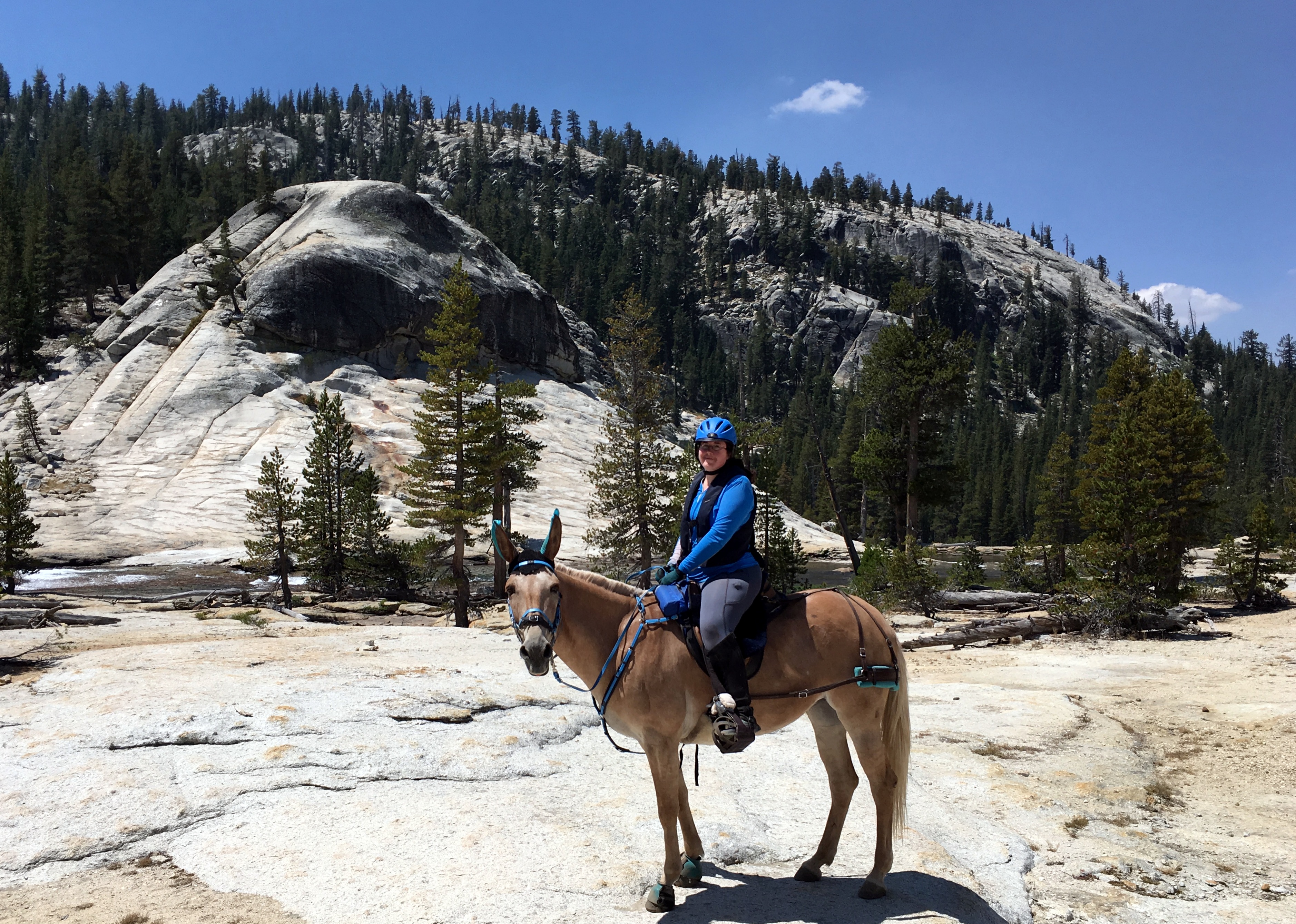 About a mile out from Soda Springs, Nilla decided that hikers were terrifying and stared flying sideways into trees and off the trails for no apparent reason. Mules! It’s like the old adage about weather, but with mules if you don’t like their attitude, wait 30 minutes and it’ll change. By the time we got back to camp she was over it.

We eventually arrived back at the camp to shower, enjoy dinner, roast marshmallows over the fire, and relax with a movie on our iPad. Horse camping is such an amazing experience. If you have the chance, go horse camping at Yosemite. I would guess that these campgrounds and trails won’t be kept open to stock forever. The tides are changing in this country and horseback riders are just not the National Park Service’s priority. Another of our neighbors at the horse camp came by to say she was so happy to see someone young doing this as it’s mostly retired people. I will never have children to pass these parks on to, but I want them to remain available for everyone, riders and hikers alike. The only way for that to happen is for more equestrians to use the parks and campgrounds. Get out there. Go Horse Camping! 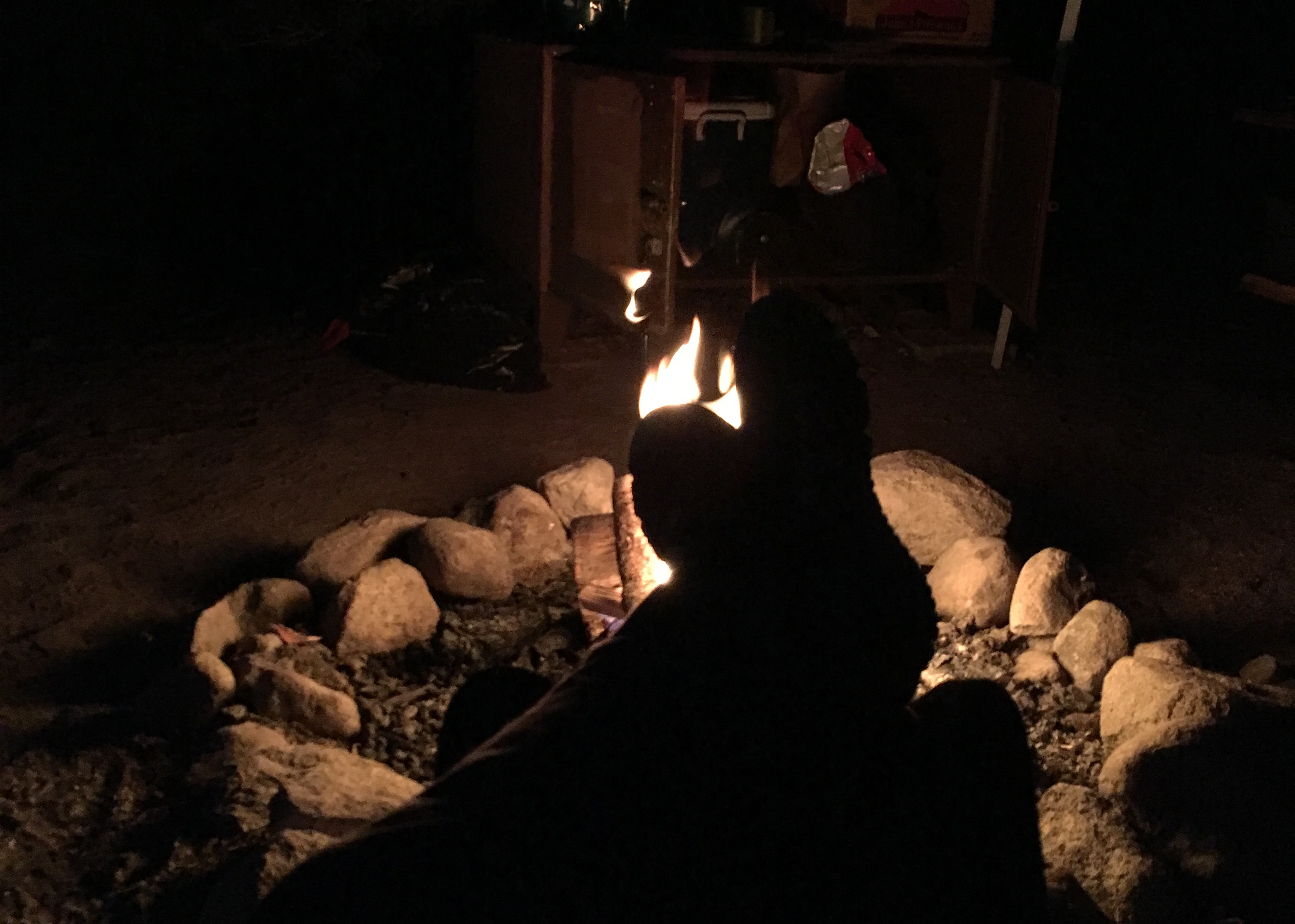