Warning: this is a long post and filled with graphic pictures of wounds.

On Saturday, Dijon’s leaser were signed up to go to desensitizing clinic. We met at the barn bright an early, packed the trailer, and loaded the ponies. Then, as we were driving down the driveway, Nilla kicked her leg through the door of the trailer. We’ve been trailering Nilla backwards (because she prefers this) and unfortunately, this put her hind leg near the side-escape door and she was able to kick the bottom of the door hard enough to get her leg out of the door and then get it stuck. Because the door was locked, it didn’t open at the latch and only moved out at the bottom, but the door didn’t bend out permanently, so once her leg was out of the door, in order to get it back in, she had to pull it back towards the corner. This is hard to explain, but my photoshop abilities are nonexistent, but here: 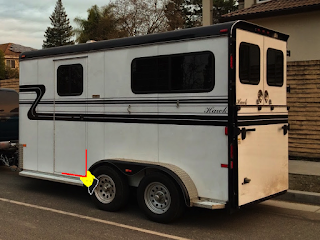 In yanking her leg back into the trailer, she removed a bunch of skin. Luckily, I saw this happen in my side-view mirror. Since we were still in the driveway when she did this, I was able to get out, and go look at her. The door was bent out of shape, so I kicked it until it went back into place.

Nilla was standing three-legged in the trailer. I opened the back doors and ramp and unloaded her. She was standing three-legged and hobbling to move, but she was willing to walk, slowly, back up to the barn. I threw her in the stall and asked the barn owner to call the vet from her house (we have no cell service at the barn). Then I asked my leaser to go call the clinic and tell them we weren’t coming. Nilla was cut up and bleeding, but nothing was gushing, so I just left her alone. I didn’t want to touch any of the wounds so the vet could see them as they were. She was standing in the stall holding the leg up, but eating hay. So I left her there and went to turn the trailer around. I had to drive a few miles down the road to turn around.

By the time I got back, the barn owner said the vet was coming. Apparently the vet said I should take her to the hospital, but my barn owner thought the trailer was broken and told the vet to come. Although the trailer was working, I was not relishing trying to trailer a three-legged mule intent on self-destruction via trailer. Obviously we would go there if we had to, but I’d rather start with the field vet and get her stabilized first.

Since the vet is a good 30-45 minutes away, I had time to kill. So I cleaned out and organized my trailer tack room. And cleaned some tack. And put costumes on chickens. Nilla ate hay and stood around on three-legs. 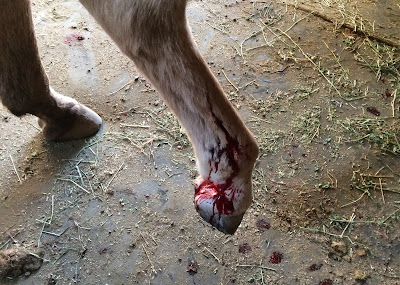 As much as I was upset about Nilla, I have to say in all honestly, I was also mad at Nilla. She did this to herself. Yeah, she didn’t mean to injure herself, but she did mean to kick the trailer door. Because she hates trailering and can’t just stand there quietly. Oh no, she has to kick and scrape herself. This is not the first time she’s injured herself in the trailer. She brought this on herself and in typical animal fashion will have learned nothing from this and will continue to injure herself in the trailer if she survives this. And it is entirely possible she will not survive this. And I was pissed at her for it. I know; not the most charitable of thoughts. But they’re the thoughts I was having. 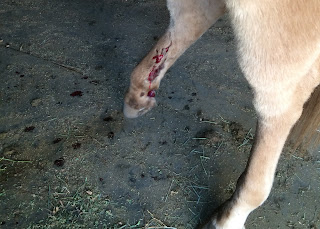 Anyway, the vet finally showed up and we discussed our options. By this point, Nilla was standing a bit more with her leg on the ground. She was cocking it, but not holding it in the air. We still didn’t want to walk her up to the upper barn for x-rays. Eventually we decided to do the x-rays at the wash rack and then the vet’s husband would take the vet’s van up to the upper barn to process the x-rays. The X-ray machine shorts out the vet’s battery converter, but it will take the x-rays. The imaging machine will just flat out not work off the battery converter. 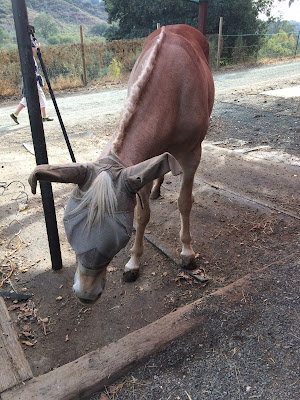 Nilla was sedated for the x-rays and then, while the vet’s husband took the van up to process them, the vet started cleaning out the wounds. We started with the hose to get debris out. If you’re opposed to blood, scroll quickly through the next few pictures. 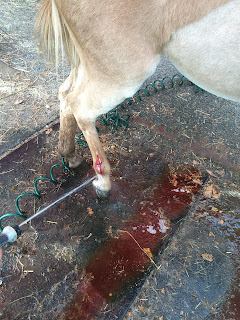 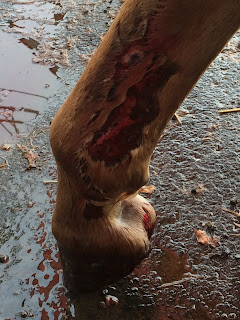 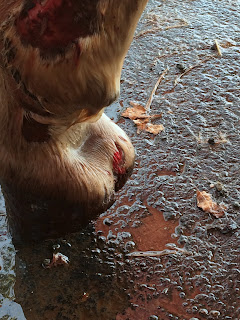 After the hose, the vet got in with cotton scrub and examined the wounds. The inside of the leg was declared fine, basically road rash/ scraped skin. Along the coronet were some cuts as well, but not too deep. The outside was the problem. It’s hard to see in the pictures, but the cuts were really deep. 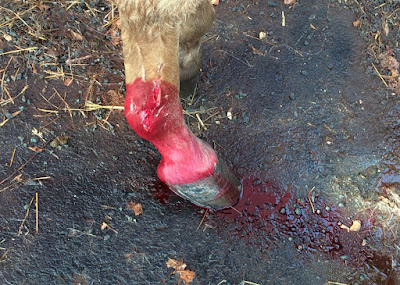 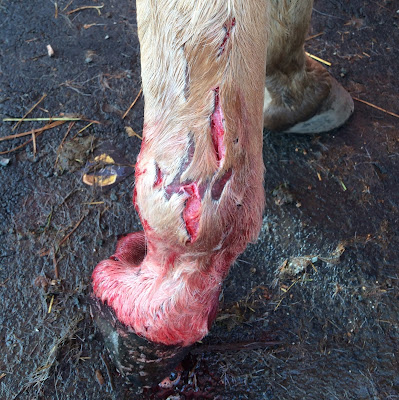 If you look closely, there are two main wounds. A lower one on the joint and a higher one along tendons. There’s a skin flap covering the upper one, so it looks like s small line, but the skin on the left could be pulled back to a see a much bigger would. It should have gone into the tendon sheath. The lower wound over the pastern bone should have gone into the joint. That skin was gone (no flap) and the vet said there was only 1 layer of dermis left. If the cuts had gone into the tendon sheath or into the joint capsule, she probably would not have survived. The infection risk just skyrockets with that. This is when the vet said this was a one in a million wound. It was a miracle she wasn’t worse. 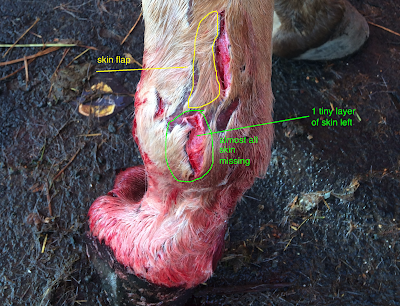 The vet’s husband came back with the images soon after this and we gathered around the laptop to look at the x-rays. Mostly good news there. The splint bones looked good. Most of the bones were fine. However, there was a hairline fracture of the pastern bone. And it’s actually across the front, where she doesn’t even have a cut. Although I freaked out at hearing the word fracture, the vet wasn’t that worried about it. There’s no displacement, no chips, and it’s very small. It’s a crack, not a break. So long as she doesn’t compound the fracture by banging the leg around, it’ll heal and not cause any future issues.

But horses are prone to bashing their legs around. She can walk on it and stand on it. She just can’t stamp or kick with it. Like at flies or at stall walls or fences or other horses. This complicated our wound plans though. We had planned to stitch the upper wound that had the skin flap, but stitches are itchy and if Nilla was annoyed by the stitches and rubbed the leg around, stamped the leg around, or really did anything in annoyance with that leg, she’d injure the fracture. And Nilla hates wraps on her legs. She pulls them off whenever she can. If we stitched, the wraps would need to stay on longer and require frequent changing which she was unlikely to let me do without yanking her leg away/kicking the entire time.

Since survival is more important than having a pretty leg, we decided not to stitch. And given the lower wound couldn’t even be stitched because the skin was gone and the gap was too wide, we were going to have an ugly leg anyway. We decided to do a Robert Jones Bandage for 3 days to give the wounds a chance to form proud flesh. After three days, the bandage comes off and I have to keep the leg covered in Alushield, which I have ordered 5 more bottles of. Once the bandage is off, she can go into her small paddock instead of just a stall. This should help her sanity. Then she’ll need a few weeks for it to heal with oral antibiotics, bute, and tri-dex for 10 days.

By the time we reviewed the x-rays, Nilla was partially awake and had to get re-sedated for the final cleaning and bandaging. At this point she was pissed. She’s always been bad about shots, but was surprisingly good for the hock x-rays and then good for the first sedation shot, but now she was done. And I don’t blame her. In the first round, she got a shot of sedation, a shot of banamine, 2 shots of antibiotics (it’s so many ccs, the vet did it in two shots to spread it out into different areas). Then we sedated her again, and she though about killing all of us. Even sedated, she continued to object to shots. Which she needed a lot more of. She got Reserpine (to keep her calm long term), some other calming drug I don’t remember the name of, tetanus, and a tube of tri-dex paste (not a shot, but she objected to that too).

And then we got to wrap her leg, which she was pissed about as well. We barely got the bandage on with her trying to fidget and move. The vet actually said she didn’t think she could have gotten stitches into her. And if you’re wondering, we can’t give her any more sedation without her falling down. She never reaches a happy place of out of it enough to work on, but still standing. Any more sedation and she’ll start tripping and falling down which isn’t helpful for stitching either. 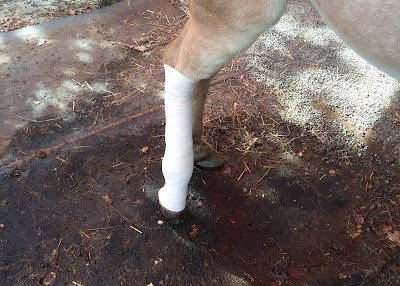 The vet finally got to leave and I got to work setting up her stall. It took me a while to get bedding into it, a water bucket, and hay. I also filled her treat ball. Once she woke up enough to go to her stall, I went to the feed store to buy a Lickit treat for her. Then I called my husband who was hiking and told him he needed to come home. I guess I wasn’t totally coherent on the phone and he heard fracture and Nilla and thought she was going to be put down so, when he got home, he was happy to hear it wasn’t that bad.

The prognosis is actually very good if – and this is a big if – she can keep from kicking/slamming that leg around. We’re keeping her coated in fly spray and I added fly tack strips to her stall. Dijon is in the paddock next to her. She’s being given unlimited hay and a full treat ball and anything else we can think of to keep her quiet. If she keeps the hairline fracture from becoming an actual fracture and we don’t get any infection, she’ll return to full work and have no limitations because of this. But there are a lot of ifs in there. She’s not out of the woods yet.

Go hug your ponies. You never know how much time you have with them. I really thought I’d lost mine. I may still lose her.