Warning, this is a sad story with sad pictures.

Our barn is mostly home to retired horses. The barn owner has a 40+ year old pony named Easy and a 28 year old draft/paint named Chief. I’ve mentioned Chief briefly on the blog before. He’s the resident loaner horse. Everyone borrows him when they have family or friends over who want to ride. He can’t do much, but he can walk up to the winery and back. 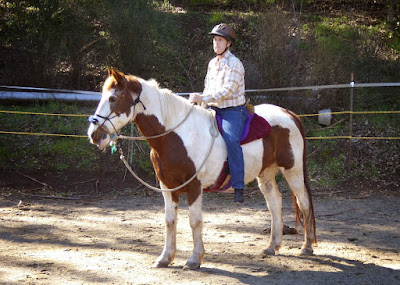 On Sunday, the barn owner called us around 11:30 to say that Chief was down and could we come help get him up. At that time, she said she and another boarder had been trying for 3 hours to get him up. As we changed into barn clothes to head over, I told my husband I always thought Easy would go first. Chief had lost some teeth (you can see his tongue sticking out above) but he was in pretty good shape and not nearly so old as Easy.

By the time we got to the barn, the firemen from across the street were already there. One of them, a firewoman, actually owns horses and knew what she was doing. The vet had been called at the same time as us, but had not called back yet. Shortly after we got there, she called back and said she’d head out right away but was 35-45 minutes away depending on traffic. We were given permission to give him banamine and gave him good dose.

At this point, Chief was still trying to get up, so we thought we might be able to help him. We even got him up off his side with a combination of pushing, pulling, and eventually 4 of us got our knees under to keep him upright and then tried to pull him forward. He tried: managed to lift up on his front end, but his back legs collapsed and he face planted. Apparently he’d already done this a few times this morning. I had not know that. After this fall, I said we should keep him down until the vet got there.

Keeping him down was a bit of a struggle as he is a big horse and was still strong enough in the front end to thrash around and threaten those around him. He managed to hurl himself one more time before one of the girls who rode him as a little kid showed up. He loves little kids. This horse takes drugs for the farrier and it takes two adults to wrestle a foot up if you need to poultice and wrap his hoof (ask me how I know) but if a small child asks him to pick his foot up, he does it. So E sat by his head stroking him and he settled down.

The vet finally arrived and we discussed the situation. There are many reasons a horse isn’t supposed to lay down for that long, but one is that they can pinch a nerve that can numb the hind leg on that side making it hard for them to get back up. The vet wanted to try flipping him and seeing if he could stand. If you’ve never done it before, flipping a horse isn’t terribly difficult. You can even do it by yourself if you have to. I’ve had to do it before for a cast horse. But moving a 1300+ lb horse is a whole other matter. 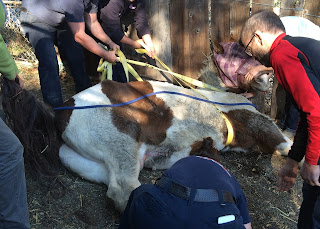 Chief got a little bit of sedative and then it took eight people to rotate him and pull him away from the fence. Then we had to dismantle and move a garden wall of cement bricks out of the way before we flipped him. Once flipped, we got some towels and started rubbing and massaging the hind leg that had been on the bottom. He was flexing the hoof a bit so he had some sensation. We gave him a while to come out of the sedation and then began trying to get him up.

And it did not go well. Chief was done. At this point it was 2pm. The BO had found him laying down around 7am. He frequently lies down in the morning, so she didn’t get worried until 8 or so when he wasn’t getting up to eat.  There were no thrash marks from before 8am so we don’t think he’d been down and struggling all night. At this point though, he’d been down and trying to get up for at least 7 hours. And he was exhausted. Even with all of us pushing and pulling, he didn’t want to get up. It took the vet pouring water inside his ears to get him to even get upright. Then I physically pulled his front legs out in front of him to get him into position to stand. And all 8 of us tried to shove/pull him up. We tried hitting him with a crop. We tried the water trick, but he’d stopped even being bothered by that. We tried grain, loud noises, smoke, everything. But he didn’t want to try anymore.

We finally annoyed him enough and he attempted to get up, but his hind legs collapsed. And he went down. When he tried to stand, he didn’t use the crushed leg at all, and the vet could see that he’d lost the use of it. The little bit of hoof flexing was the best we could get, he couldn’t move the leg on his own. And he’d popped out his stifle.

The barn owner didn’t want to watch us getting him up, so she wasn’t there for all of this. When he fell, I knew what needed to be done. Honestly, I’d known that morning when we left the house and I made the comment about losing him before Easy. But we had to try. You have to give them every chance. And we had. So I looked at the vet, and she looked at me, and I asked if I should get the owner. She said yes.

So I went and got the BO and told her what had happened and that she needed to come make the decision to put him down. We walked back to Chief together and she asked the vet a few questions, but accepted the answer. He was given a muscle relaxant to keep him from thrashing and the BO and E cried over him and told him he was a good boy. I went to get Easy and stood with him while Chief was given the final shots. 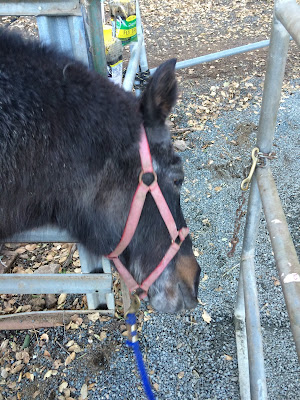 Chief and Easy have been together for years and years. Easy will call and pace the fenceline looking for Chief when Chief goes anywhere so we were worried about Easy. The BO wanted Easy to know Chief was gone so I walked him over when it was done. 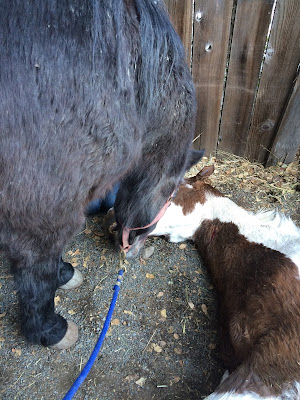 Easy reached down, sniffed Chief and stood for a brief moment and then he wanted to walk away. I took him to his stall and he hasn’t called for Chief once. He is probably still lonely but he hasn’t been pacing and acting like he expects Chief to come back.

After putting Easy away, we helped clean up, put the paddock fence back, got a tarp and covered Chief and helped do the afternoon feeding to free up the BO. I hugged her and told her she did the right thing. She said in a surprised tone: “are you sure?” I told her yes, it needed to happen and she did right by him.

He was a good horse.