I originally had grand plans for Sunday. We were going to take the horses to the beach. But then my desire to sleep in outweighed my desire to do anything else. The previous sentence is basically my life story. When we finally got to the barn, I found Eugene in agreement with my decision. 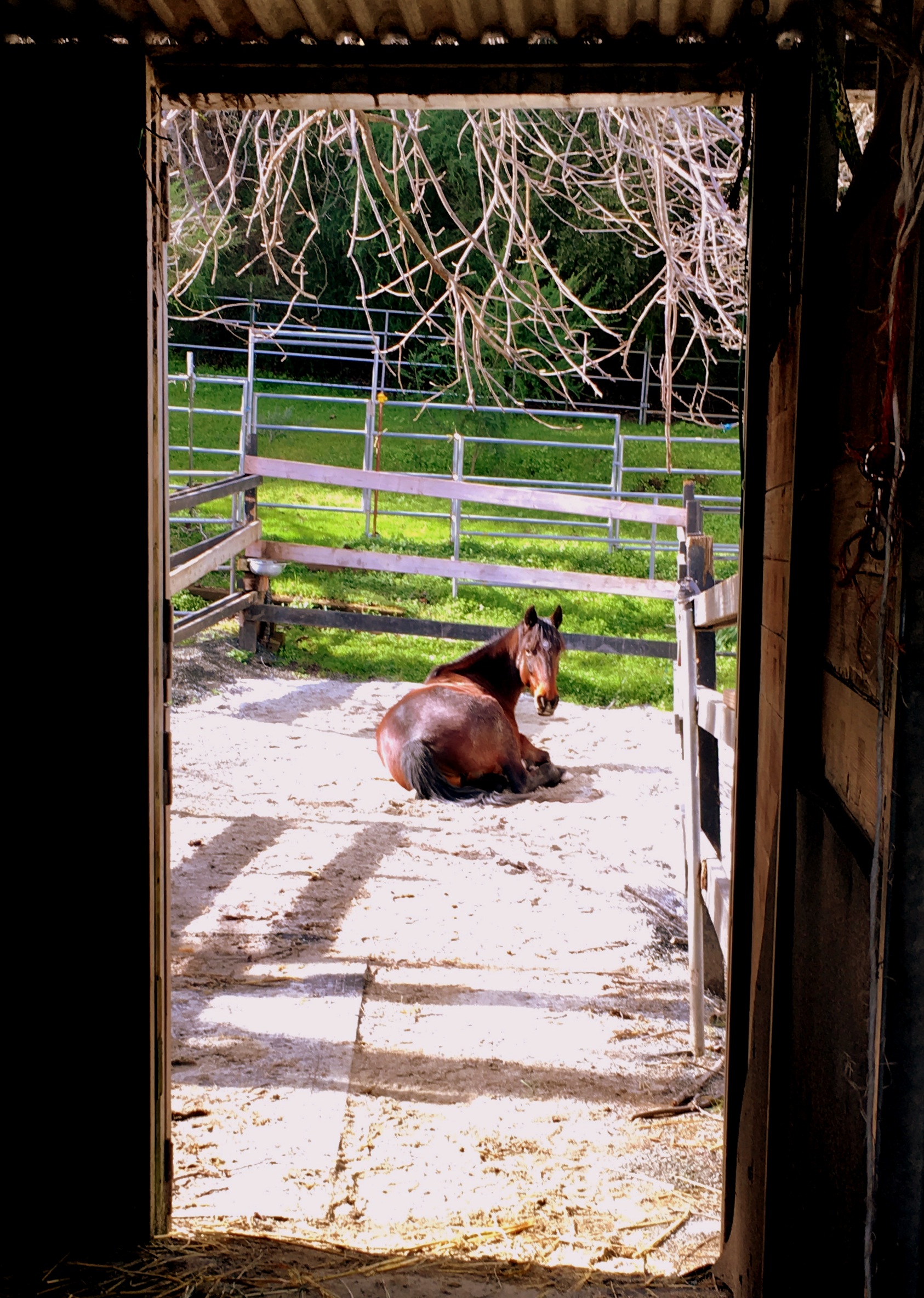 Since we didn’t have a lot of time, we trailered over to the park across the street from our barn. Despite being across the street, it’s actually really hard to get to by horseback. There’s a reservoir in the way and the trails near the reservoir are hikers only. In order to ride to the park, we need to ride through another park, ride along a road, ride through some private property and like 4 miles later, arrive at the park. By the time we get there, it’s time to go back. So we drove a few miles down the road to the parking lot, and rode out from there.

It was a really gorgeous day for a ride. Almost t-shirt weather with bright blue skies and not too much haze. Both of our horses were full of pent-up energy, but were behaving really well. 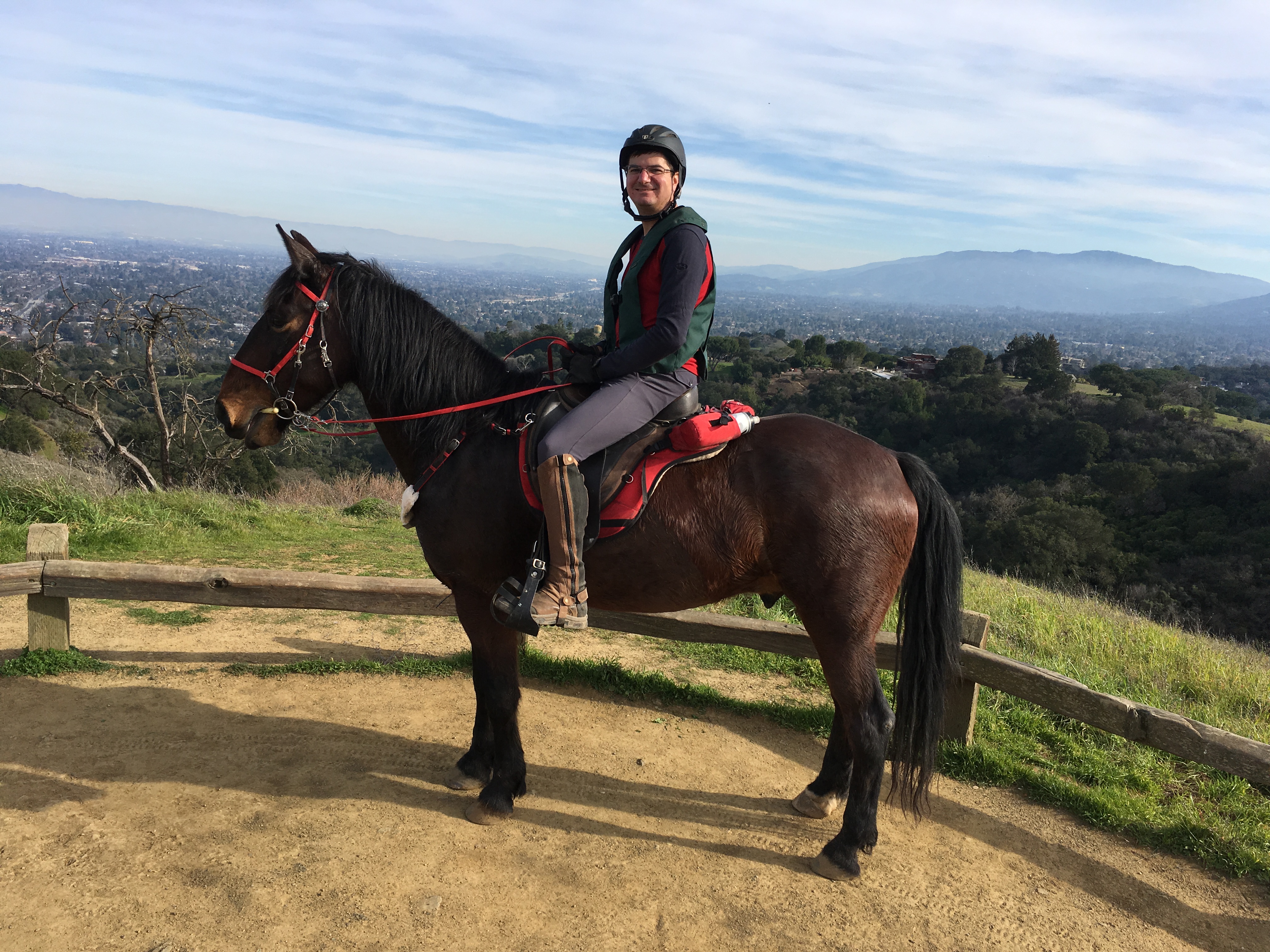 This park has a lot of bikers. While Levi has seen a few bikes, we haven’t been to a park with bikers yet. The bikers like to fly down the hills and I was really worried about one of them coming flying around a corner and terrifying him. Thankfully, all the bikers were very polite and Levi really didn’t care at all. I really like this Mustang’s mind. He’s just not a worrier. Very little bothers him. When he is bothered, he can be very difficult as he’s still a very large, young horse with wild horse instincts, but he’s not inclined to be worried. 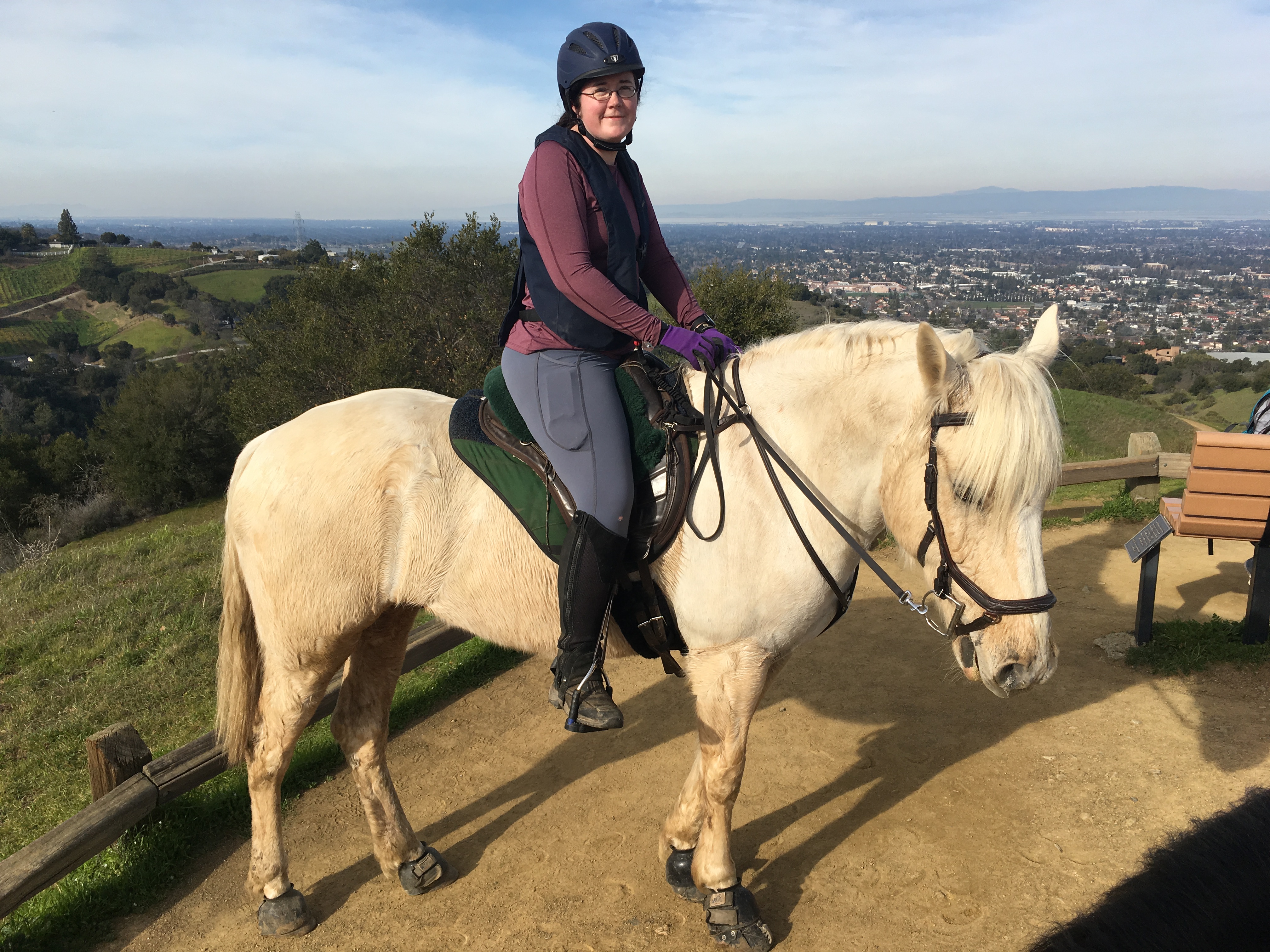 There was a bit of haze in the distance and we couldn’t see all the way to SF or into the East Bay hills, but we could see Apple’s new spaceship campus from the viewpoint. 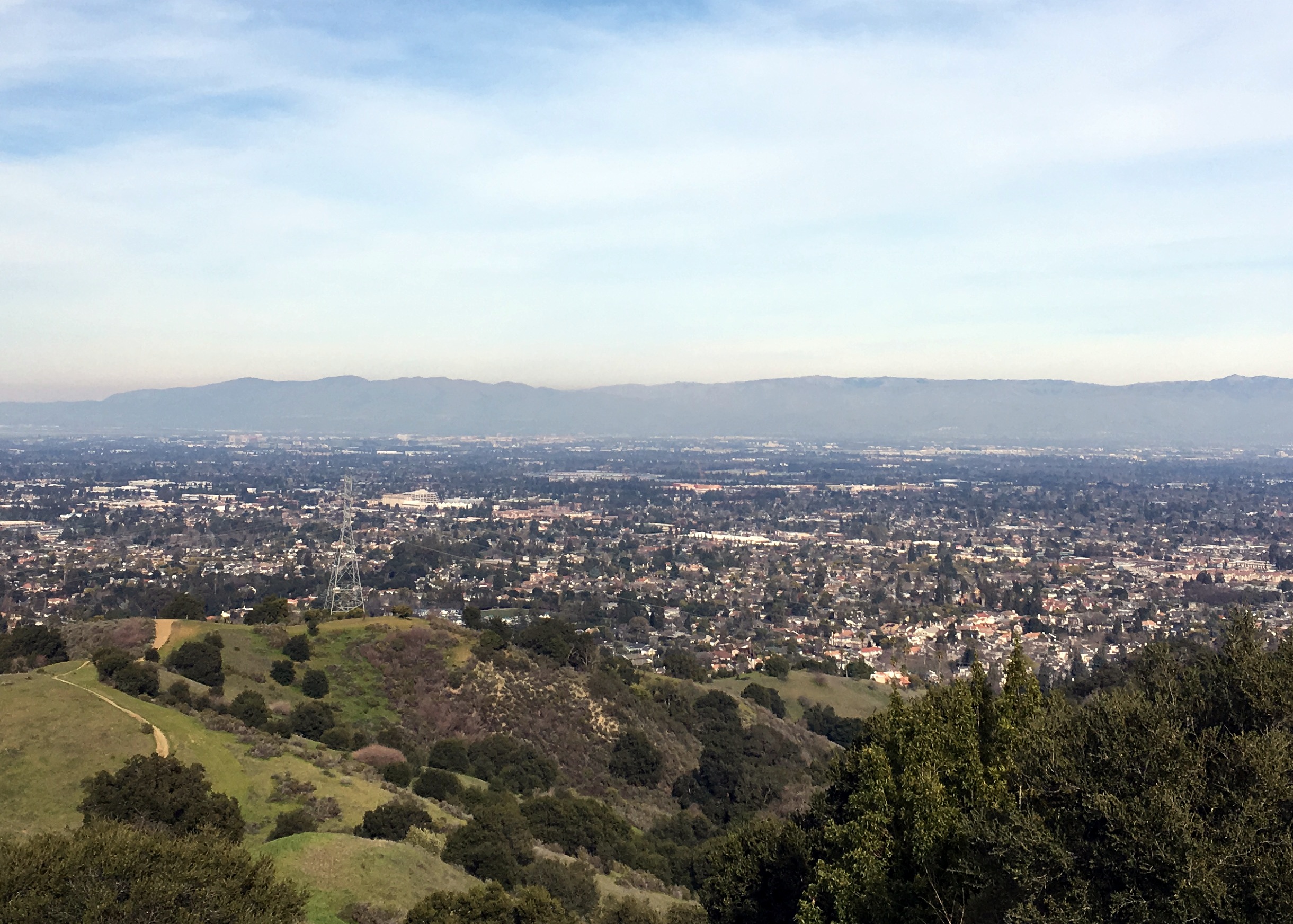 On the way back, we stopped to view our barn. We look up at these hills all the time so it’s cool to look back down from them. 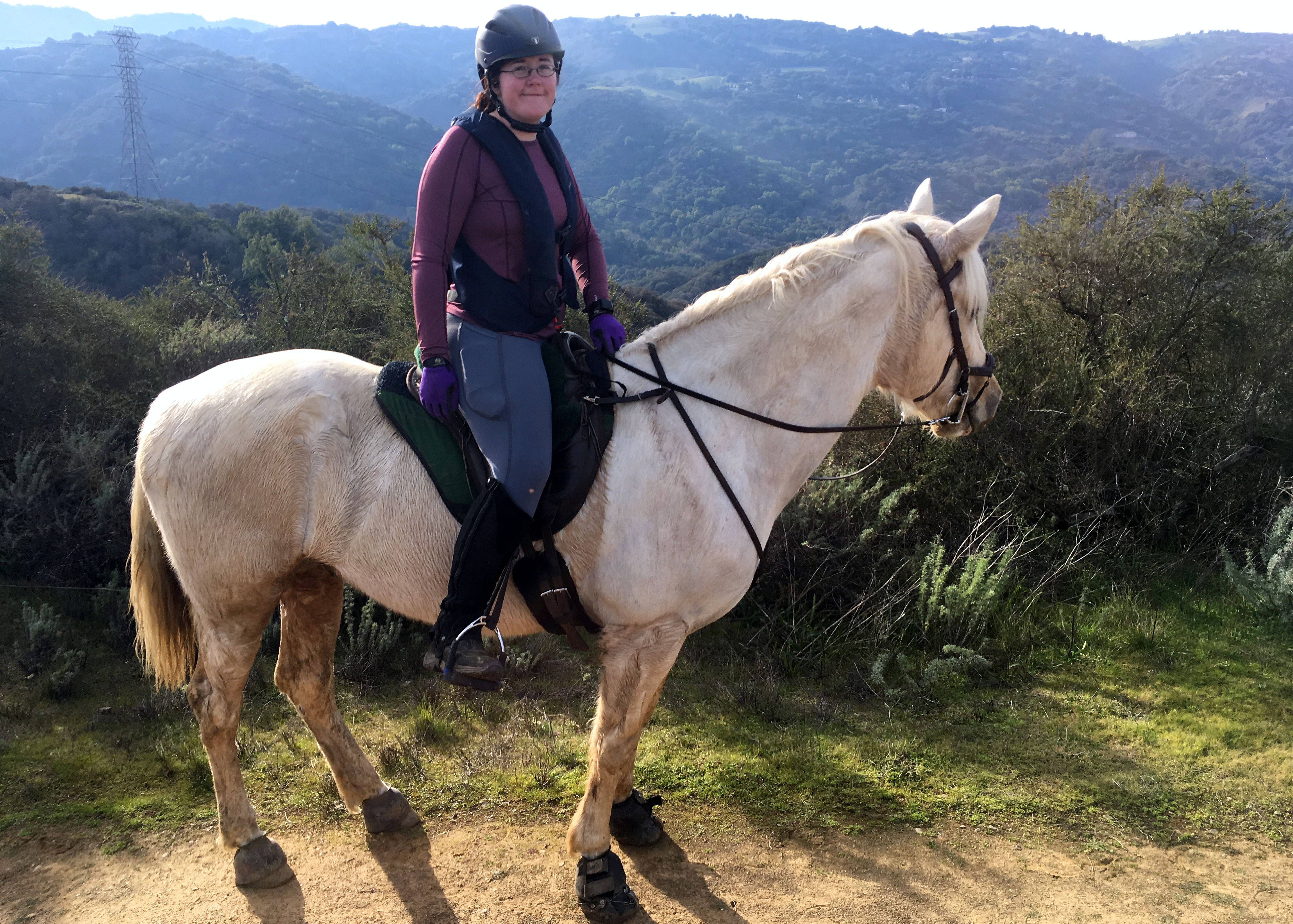 We stopped at the visitor’s center on our way back to the trailer and spoke with a ranger and visitor’s center volunteer.The ranger and volunteer were really excited to see us because we’re the only horses they ever see down here. At the other end, the park is connected to a very large boarding stable and winery that offers guided rides so it’s a very popular park for trail riders. However, the parking lot isn’t marked for equestrian parking so we’re the only ones who ever trailer in. We just park in the back parking lot and pull across a bunch of car spots. I called the park a few years ago to ask if we could do this  and they said it was fine. But most people in the area don’t know that you can park here, so they don’t trailer in. 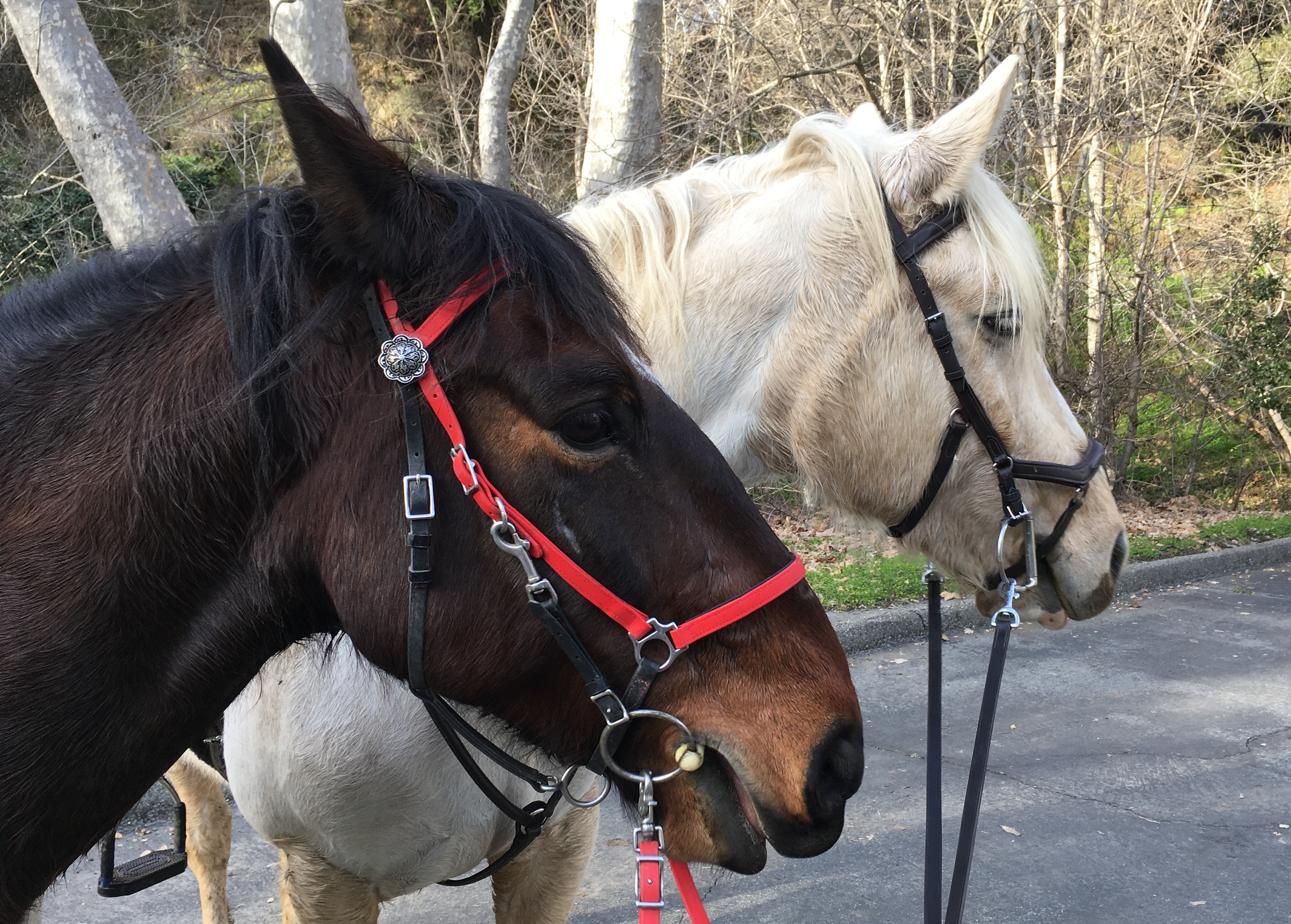 We only rode for < 10 miles, but they were all hills and the horses are so out of shape right now that even that was a lot for them. We returned home where Levi promptly smushed his sweaty self into the mud. I’m trying to hold out on shaving him since he keeps destroying blankets, but it’s getting really warm during the day and the non shaved parts just absorb so much more mud that I’m tempted to shave it all off. 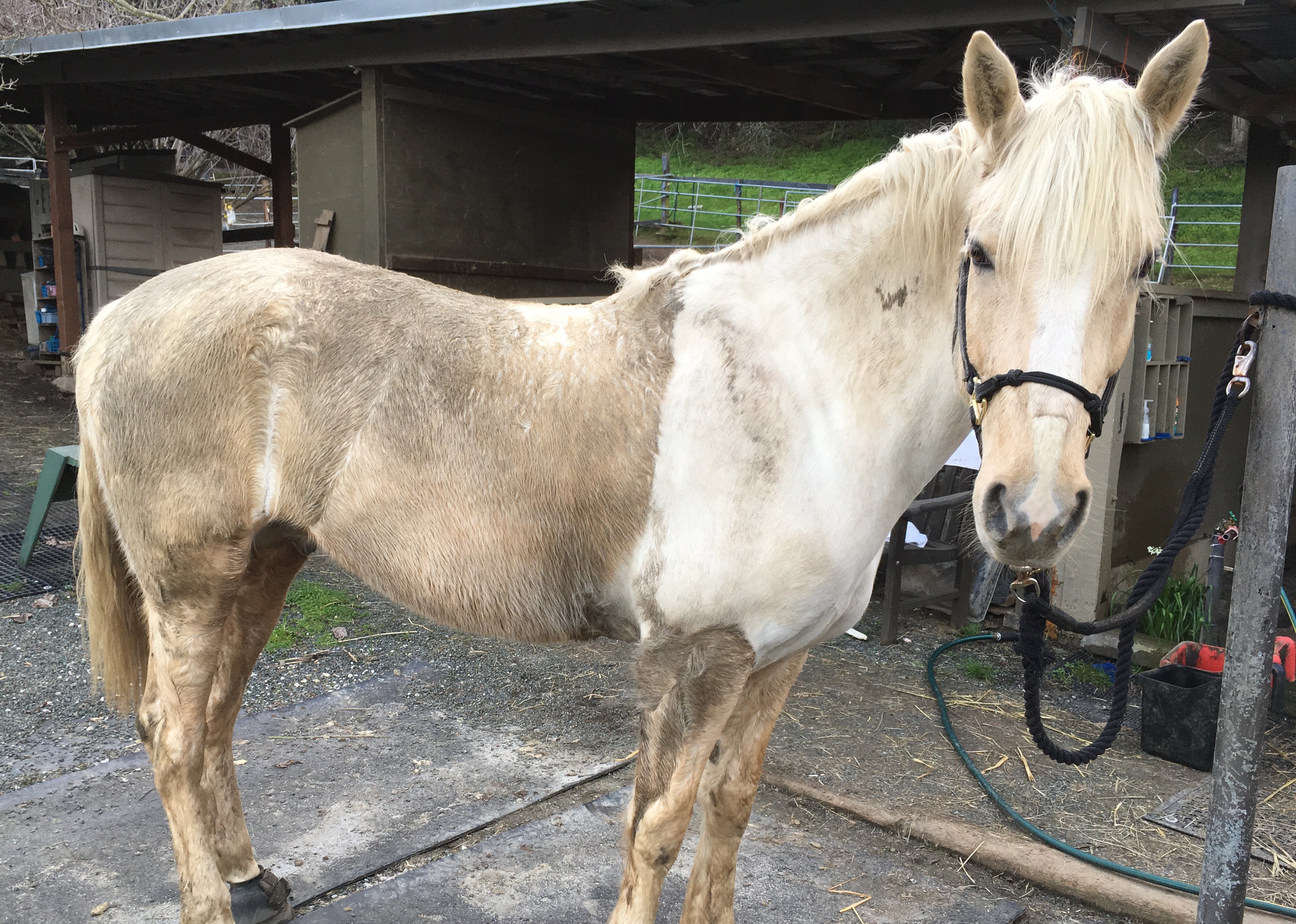 Although not quite as fun as the beach, it was a really nice day on the trails.

17 thoughts on “A Weekend Without Rain – Sunday”