When I left off last, the ponies had just finished their 15 mile fun rides and vetted through including a BC check. We took them back to the trailer to eat our own lunch and let them eat some hay and relax. After finishing my lunch, I took my camp chair over to the un-mowed grass by our trailer and let Nilla stuff herself with face-high green grass. It was basically horsey heaven. Eugene got in on the action too. 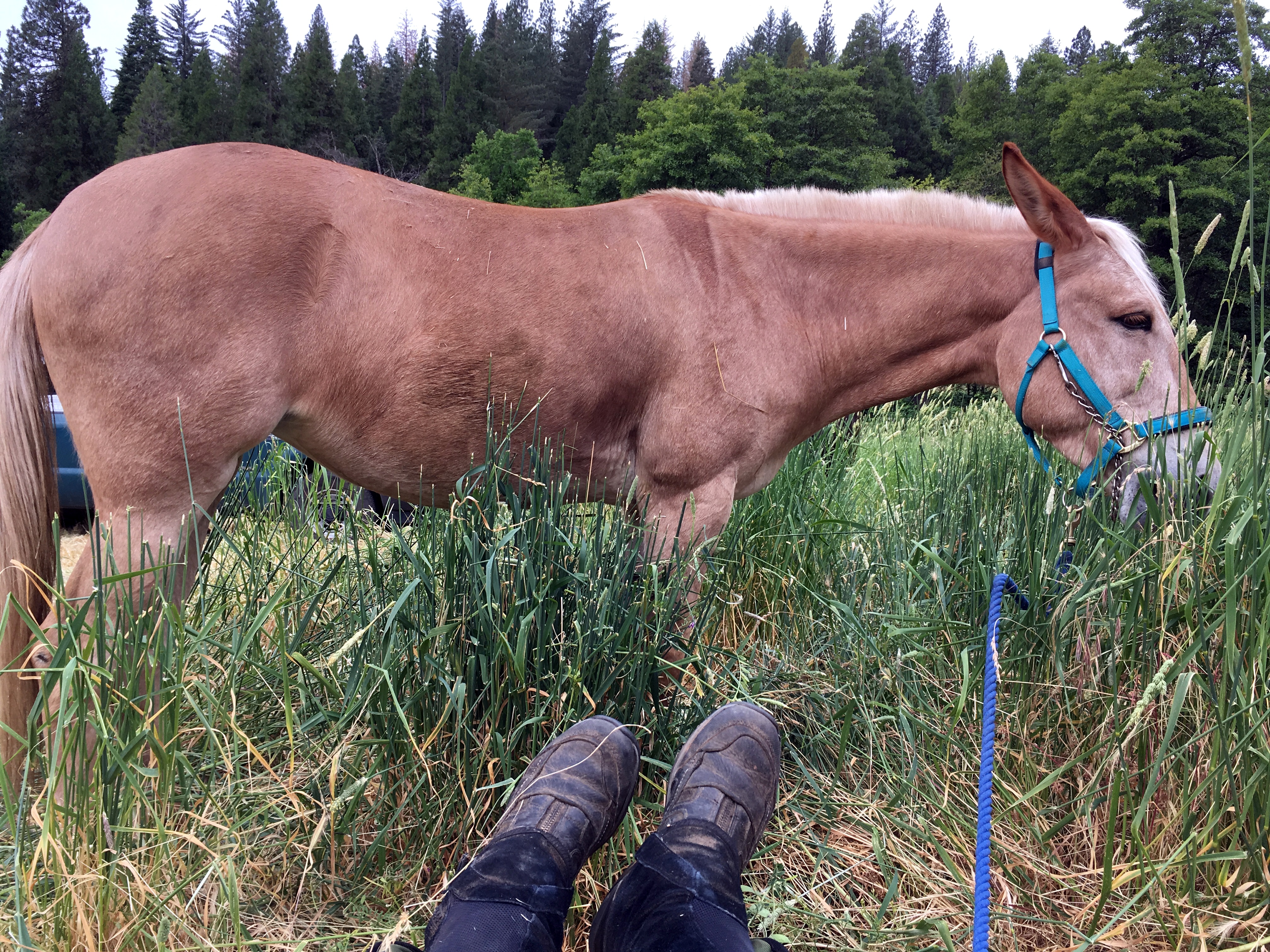 After a bit of grazing, we tacked the ponies back up and took them out to do the 10 mile loop #3 that the 50 milers do last. The ride manager had suggested that we do it if our horses were up to some extra miles as it’s a really easy loop and is also really pretty. It was nice and shaded and ran alongside a creek for parts. 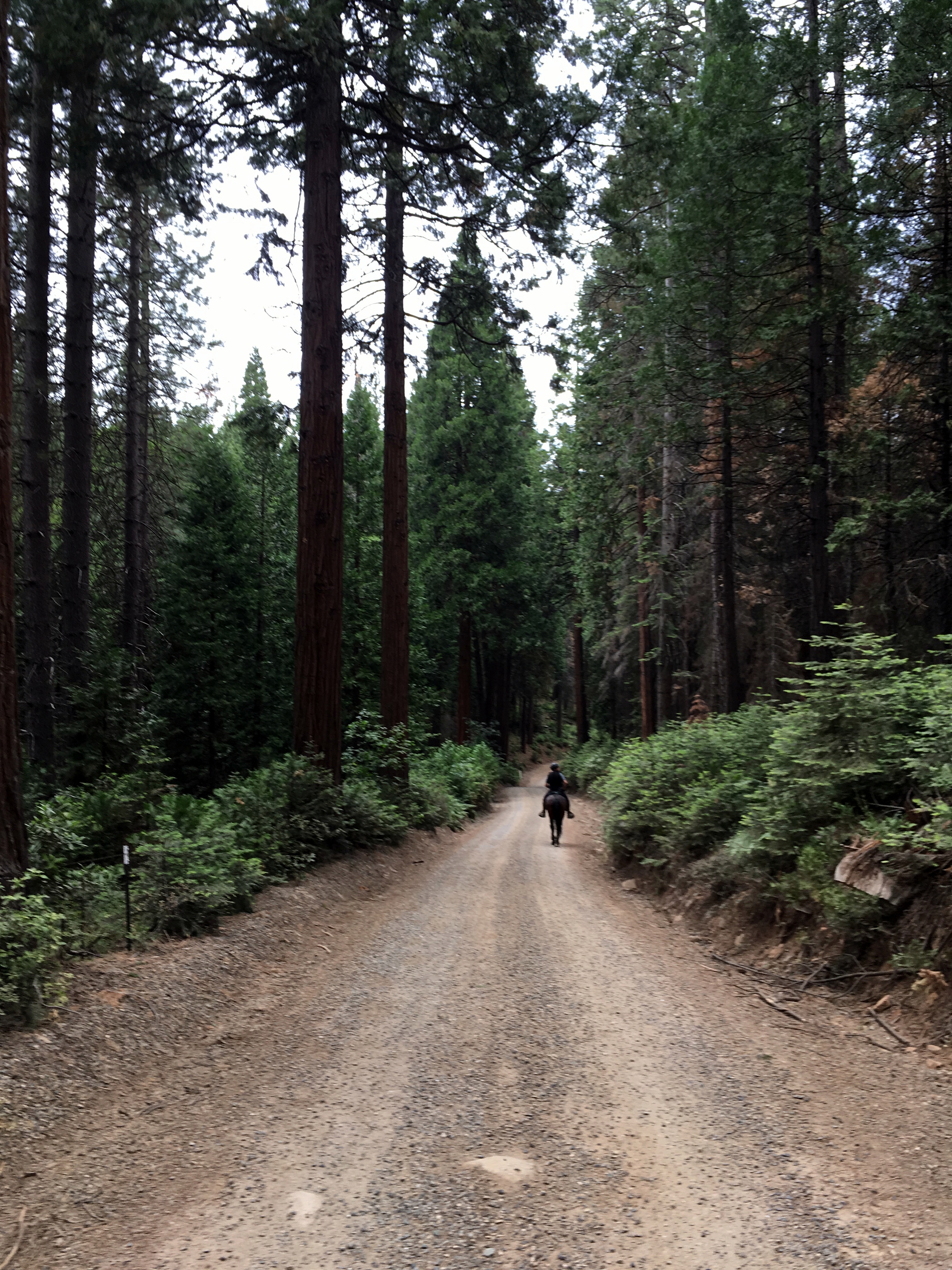 There was some single track and some wide logging roads. I liked the roads for being a nice place to trot along. The single tracks were hard for me as Nilla has decided that being passed in close quarters is deserving of temper tantrums. She’ll do it if she has to pass too so it’s not about the speed or being left behind, it’s about being too close to the other horses. I had to dismount a few times on the trail to let others pass. And then I would have to walk along looking for a log or rock to mount with as Nilla’s treeless saddle will just slide down her side if I try to get on from the ground. 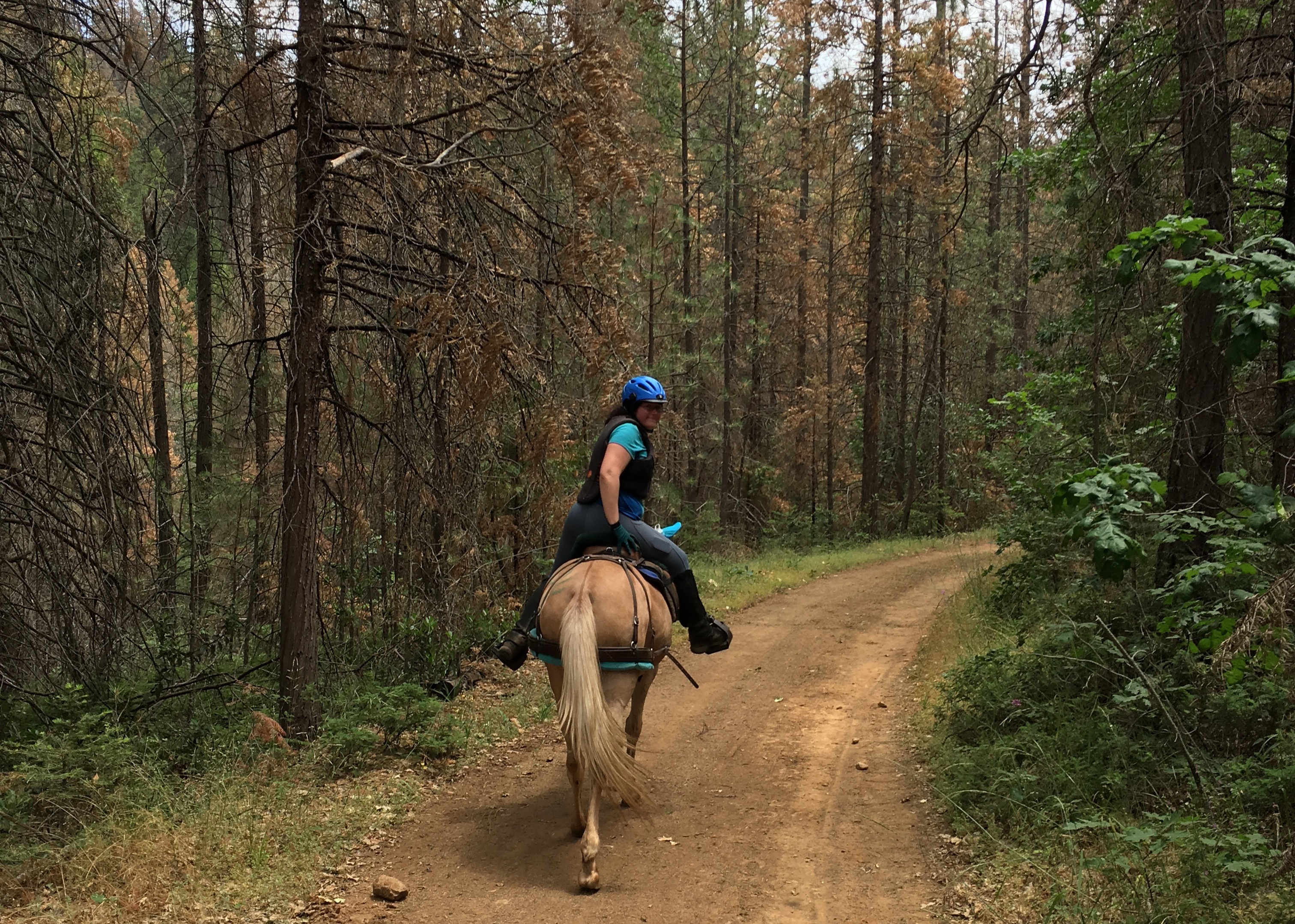 Eugene was used to horses passing him at this point, but there were some scary logs that he needed Nilla to lead him past. Because we weren’t competing anymore, we walked most of the loop. We did trot a bit through the really buggy parts by the creek. There were these swarms of gnats all over us and the horses. At one point I was spraying Nilla’s head with extra fly spray and I tried spraying the swarm and there was absolutely no effect. Like these things were not only not repelled by the spray, actively spraying them with it did nothing either. So we outran them. 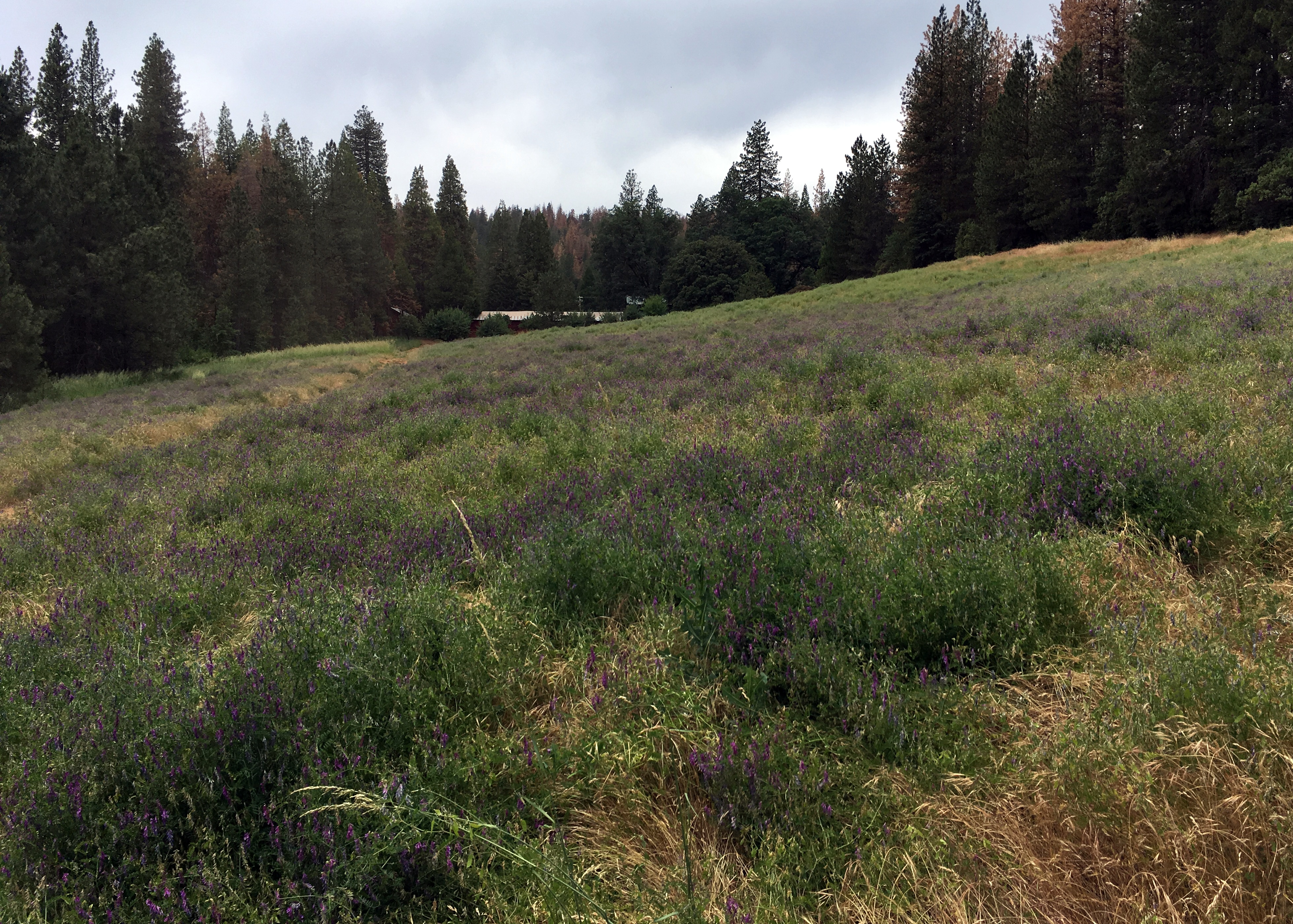 We also rode through this pretty field of wildflowers. It was really the nicest loop and I’m glad we got back out there. With this extra loop we ended up doing 25 miles, but we did it with a longer break in middle so it wasn’t quite at endurance pace. I do think we probably could have gotten through the LD, but my husband was glad we did the 15 as Eugene mental state at the beginning of the 15 was pretty crazy. We’ll do a 25 for our next ride though. 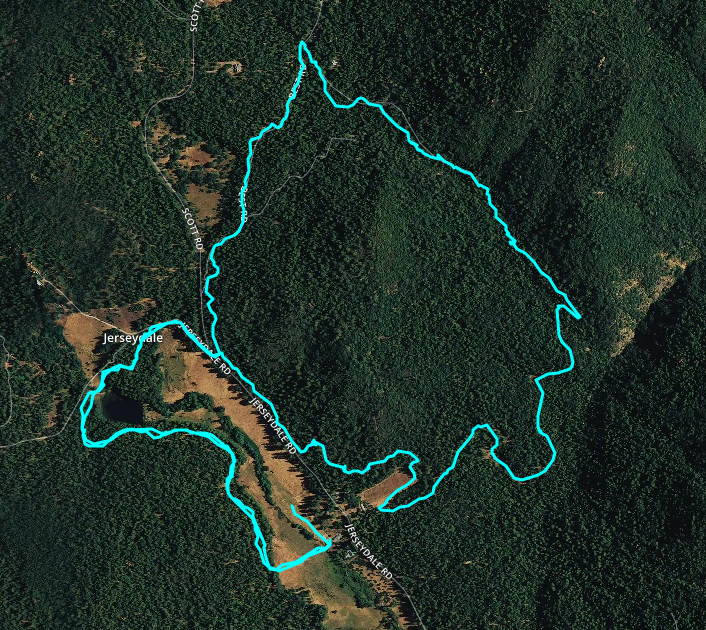 When we returned from the 10 mile loop, Nilla once again needed to roll and stuff her face with grass. Then we had to work to set up our solar shower and get the dirt and sweat off ourselves. It’s a lot of work, but I really do like having the shower. 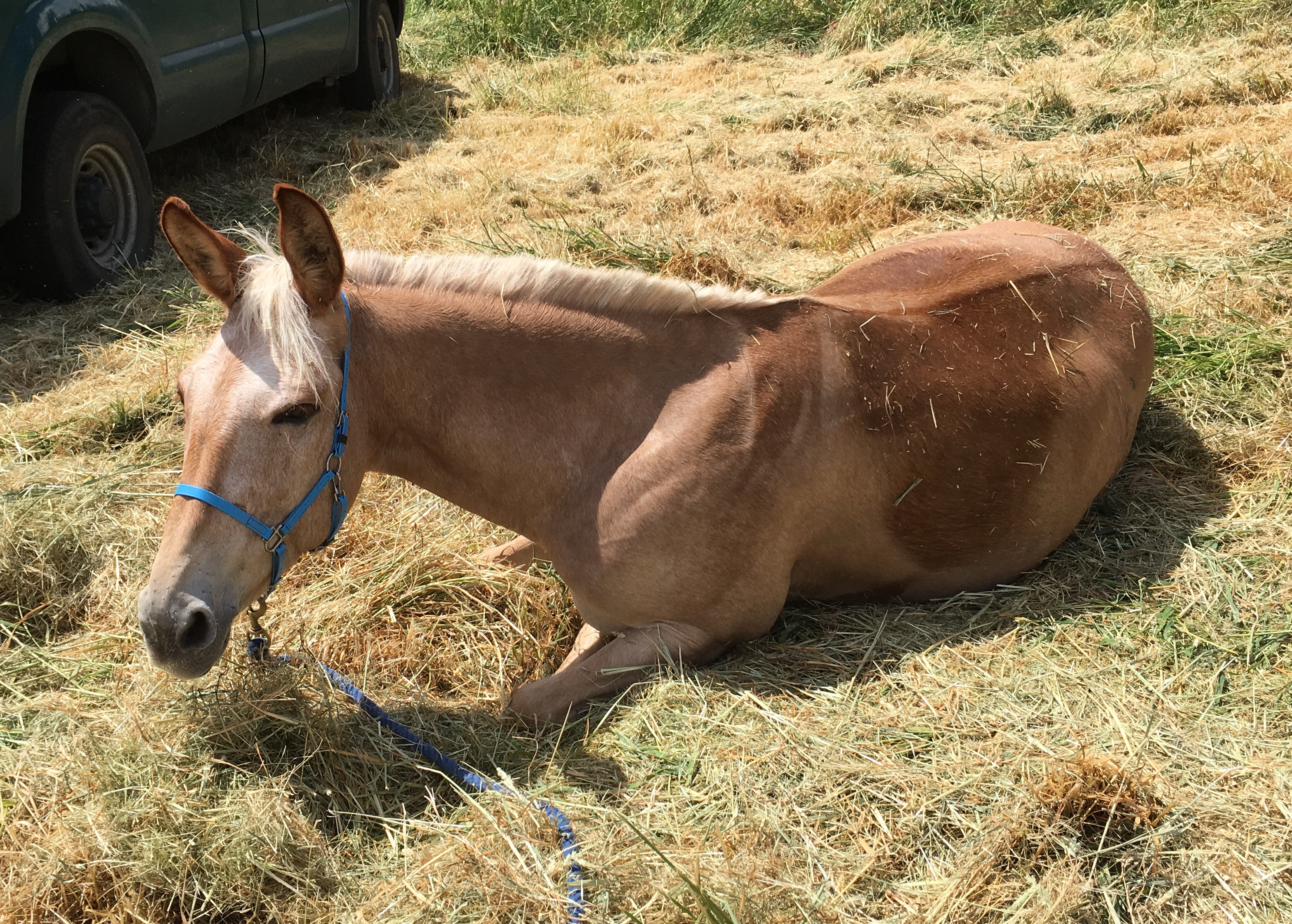 After the shower, we had some chips and dip, read for a while, and then went over to the ride dinner. There was an raffle for the trail group putting on the ride and we bought $20 worth of tickets plus two tickets for the 50-50. There were 25 items to choose from, but I put most of my tickets into the gift certificate to Crazy Tight Lady, which I didn’t win :(. We grabbed dinner and settled in to watch the raffle announcements and then the awards ceremony.

Out of the 25 items, we didn’t win anything until item 19 and then we won 4 things. Everyone was kind of glaring at us because our # kept getting called so many times in a row, but I couldn’t help it. We did win some cool stuff though. The bag of Hooflex was worth $50 alone. 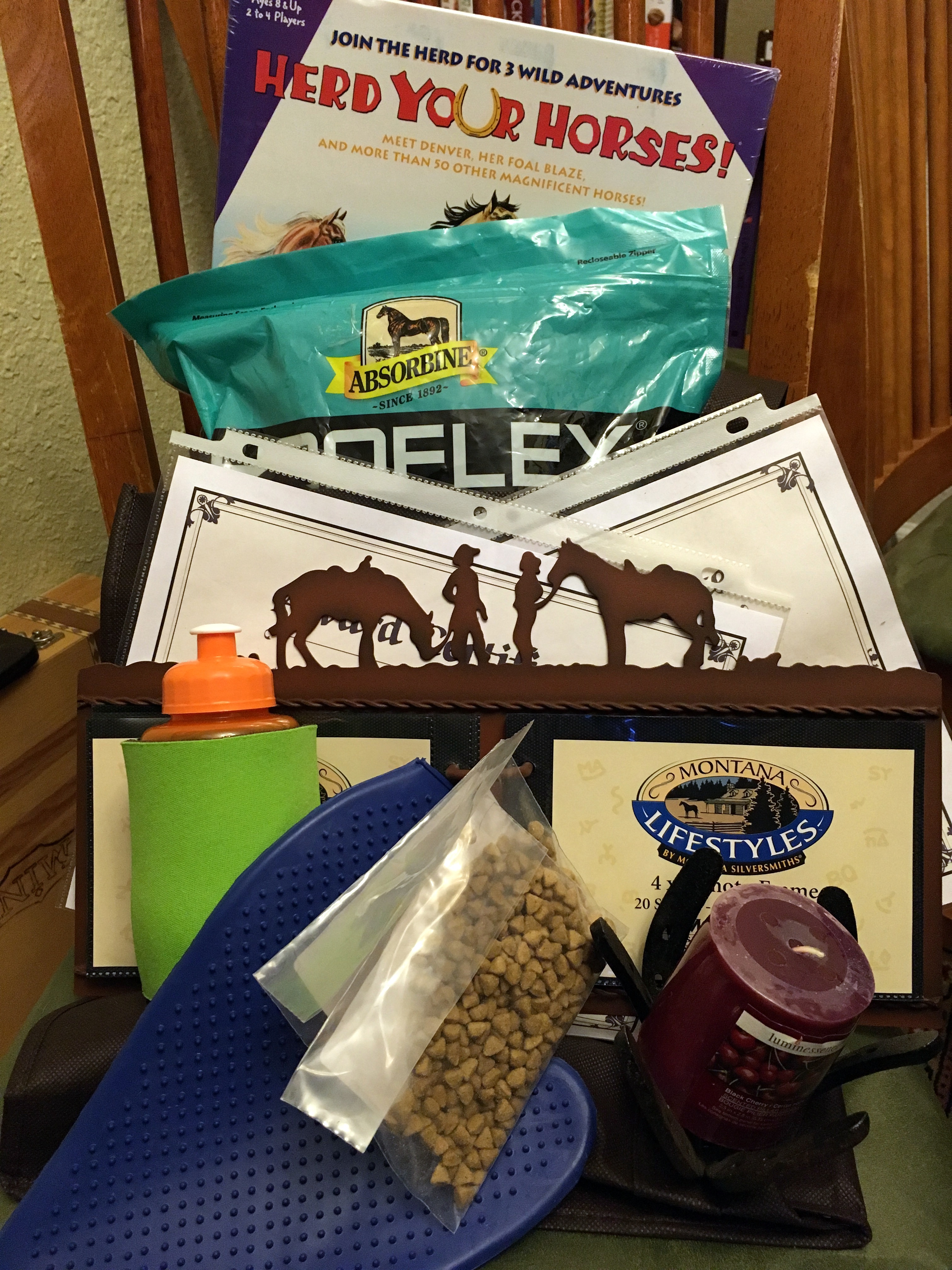 After the raffle, the awards ceremony started and they announced the fun ride first. There were 8 riders and my husband was 2nd place and I was 3rd for finish time. We got a RW bag and could fill it with a water bottle, some samples, a coupon for 20% off RW (someone sitting near us said “oh, that’s dangerous” when they announced that) some curry combs and mitts. I took the coupon and the sample, but I skipped the other stuff as we have so many of them already. My husband grabbed some though. We also got certificates of completion. And then they announced BC. And the winner was…

After the ceremony, we returned to our distant corner of the field where we were able to watch the sunset while the ponies got to graze on the lush green grass again. Then we put them away with their blankets and hay and proceeded to hide in our truck as it rained. Seriously, it rained most of the night. I’m so glad we had the sheets to put on the ponies. And the truck to sleep in. I would not have wanted to be in a tent in the rain. 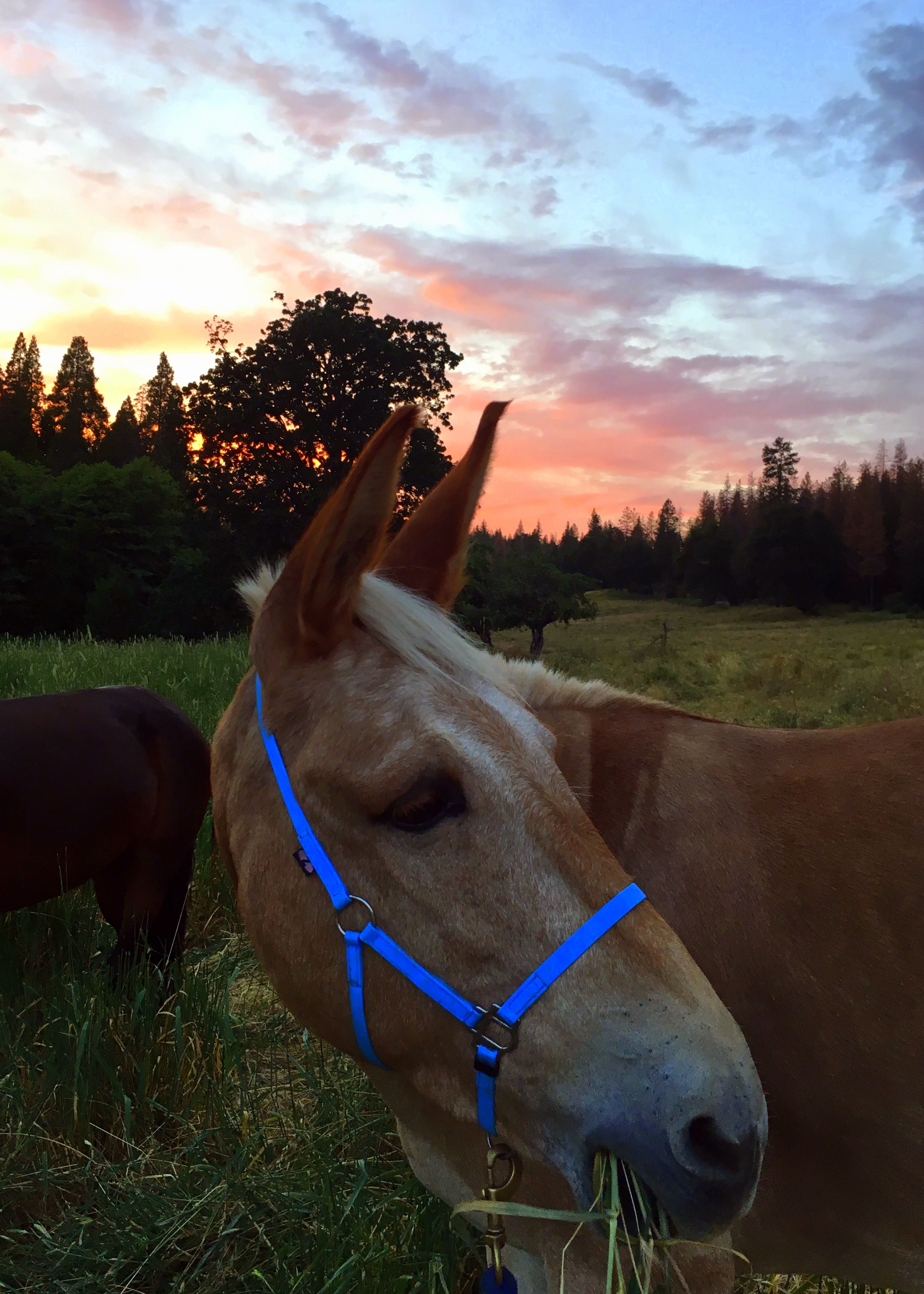 I know I complain about Nilla a lot. And, to be fair, she deserves a lot of those complaints. But she won BC so all if forgiven.
For now.
Until the next time she throws a temper tantrum.

And Eugene was just an all around star. I cannot say how much this Mustang beat all of my expectations for this ride. He handles everything, from being shod for the first time in the middle of the vet check/dinner area to being blanketed for the first time in the dark, to vetting through like a champ, and most of all, for doing 25 miles like a good little endurance horse.

We’re already looking forward to our next endurance ride.

*This is post 4 out of 6 for the custom item contest. You need to comment on 5 out of 6 posts to win the custom item. And don’t forget to enter the $25 Gift Certificate contest, which ends on 6/18. 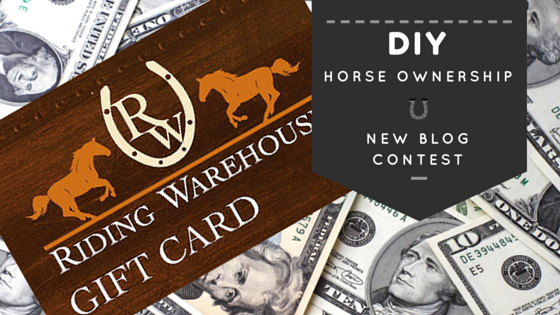