I haven’t ridden since the show. It’s been boiling hot here. So hot that when I have gone to the barn to feed the horses, they have been sweaty just standing in their stalls. And this is at 7:00pm so it’s not even like we could wait for it to cool down to ride. It never cools down. So no riding at all this week. Totally how I should be planning for a 25 mile ride coming up soon right?

Anyway, in lieu of riding posts, I thought I’d share the pictures of adorable animals I saw at the fair. The Alameda County Fair is amazing. There’s an actual race track with grandstands and Thoroughbreds racing. I somehow did not get any pictures of this, but I did watch 2 races. I wanted to bet, but the lines were insane.

There were also a lot of animals. And a lot of them were for sale. There was an entire building filled hundreds of bunnies. I kept texting my husband asking if I could get various animals. My favorite animal after horses and dogs is actually pigs, so I was like a kid in a candy store with all of the pigs.

So adorable. A pig is seriously first on my list of animals being purchased as soon as I have my own property.

There was also an amazing petting zoo. The animals were all so friendly and there were a lot of exotic animals. There were kangaroos (or wallabies – I don’t really know there were no signs).

They had 3 baby deer who were all crazy friendly. They kept coming up to people and just pressing themselves upon you or alternately chewing on your shirt/pants. They were great.

There were so many goats. This little guy was so tiny. Less than 1 foot tall. I could have put him in my lap if it were allowed.

And there were pot-bellied pigs. I stalked them all. 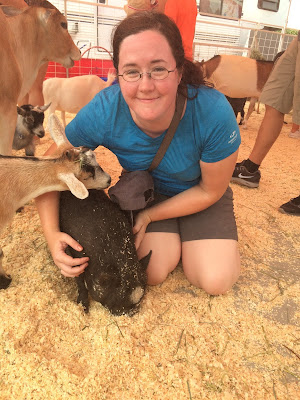 This fair was huge and really great. I’d highly recommend it to anyone in the bay area. So many adorable animals and actual horse racing to watch. I think it’s only there through this weekend, but it is a month long event so I’m already planning to go back next year.

One thought on “Alameda County Fair”