On Saturday, we trailered Eugene down to Kate’s barn for a lesson. Although not as convenient as a lesson at home, trailering out has the added bonus of exposing Eugene to new places and new jumps. Extra bonus; the arena isn’t super tiny. Since Levi is still lame, I went along as photographer. 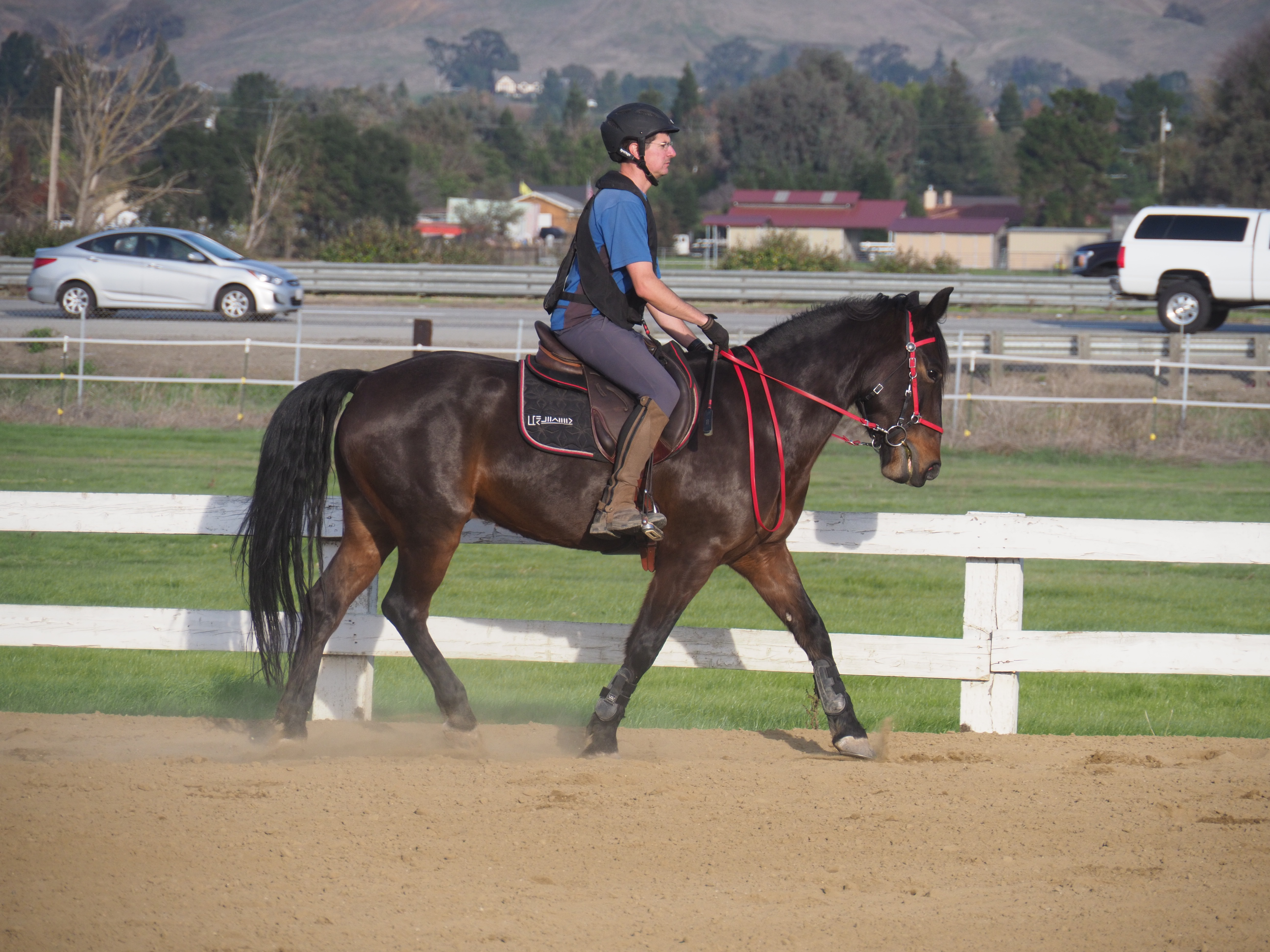 Once they were warmed up, it was time to start awkwardly trantering over crossrails. At this point Eugene just doesn’t bother jumping anything under 2′. 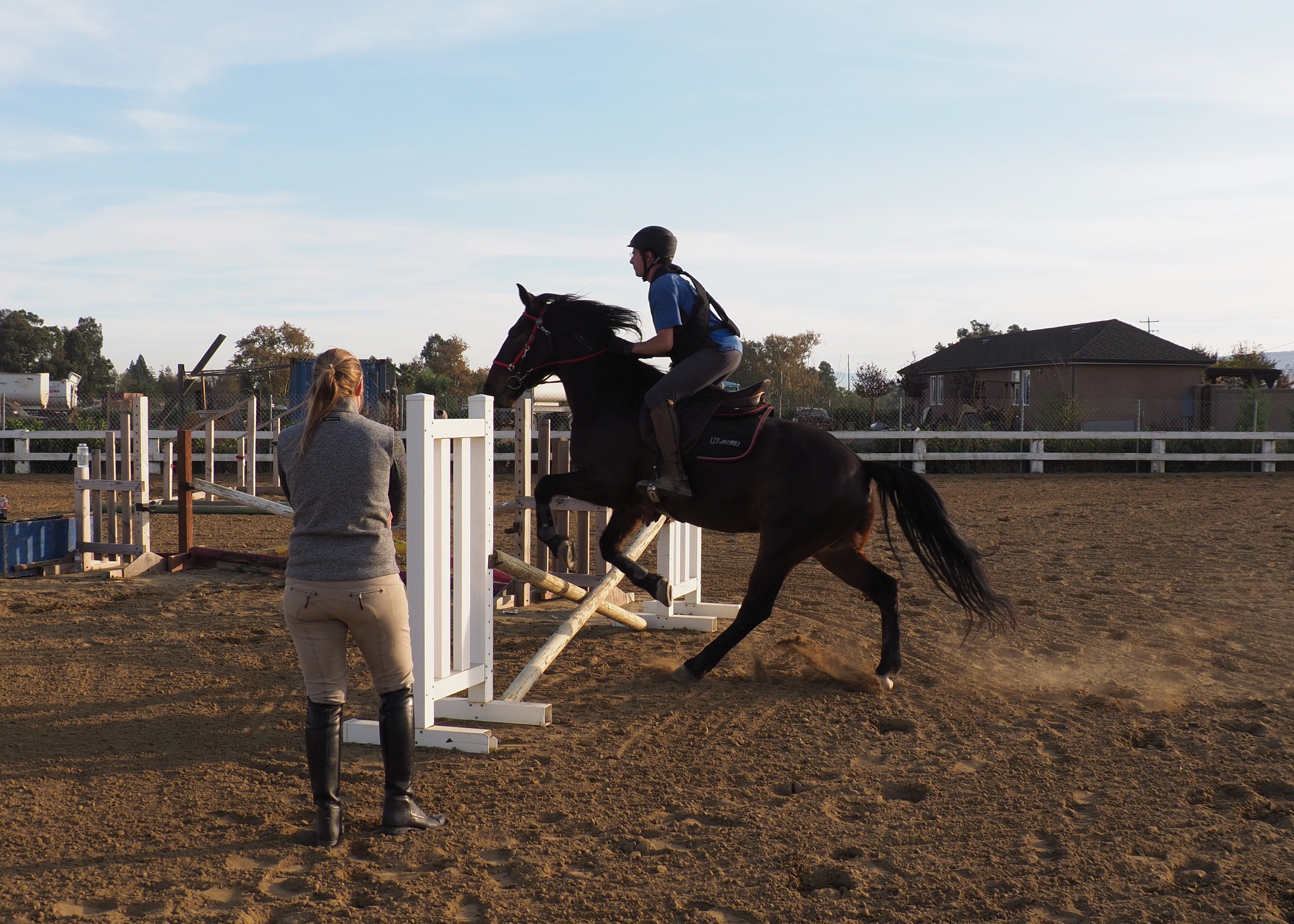 Then Kate had them do a 20m circle exercise over a 2′ plank jump. Eugene was a bit casual about that too: 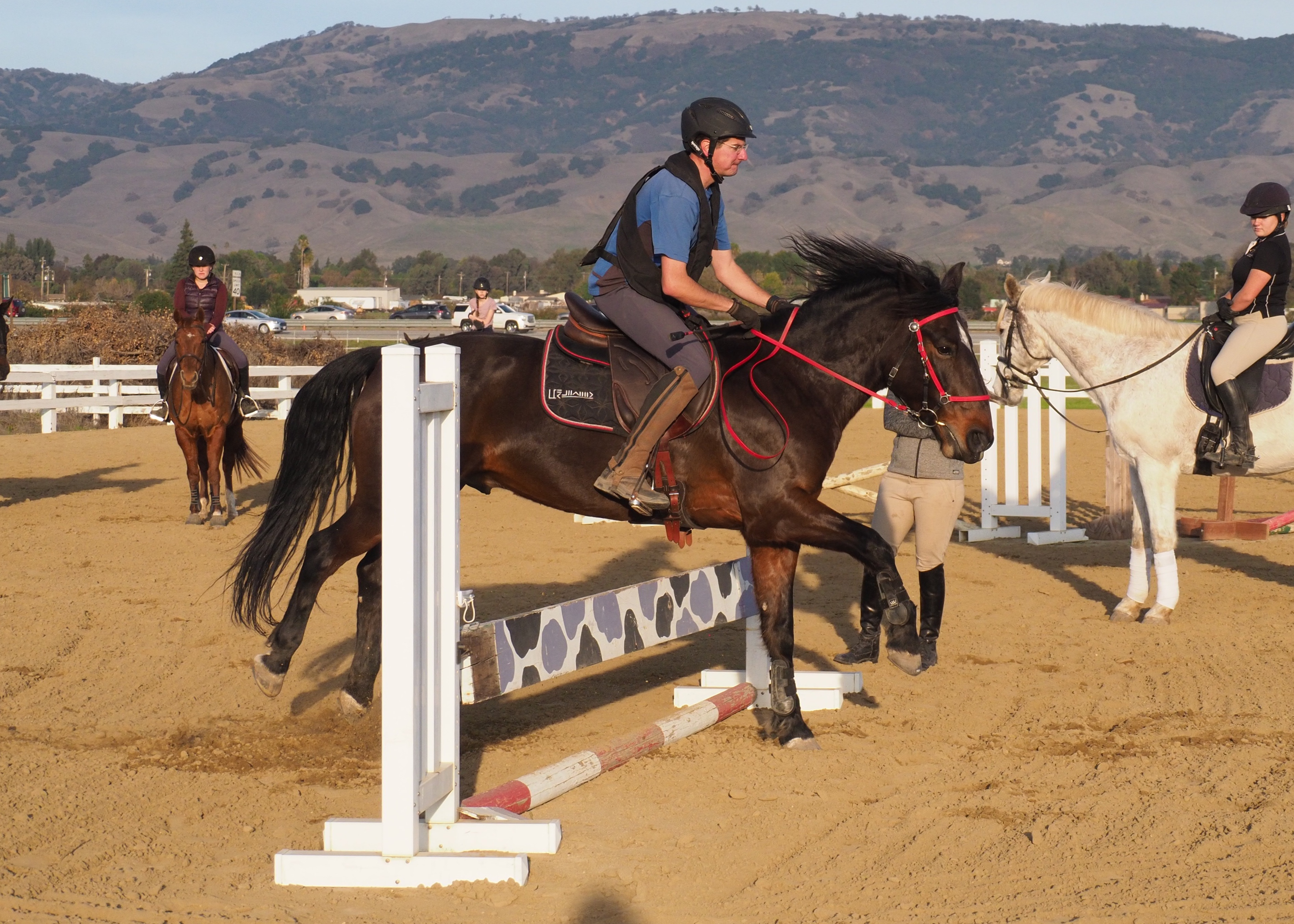 But it was a good exercise to work on pace and getting to the middle of the jump instead of the side. They kept drifting out over the jump so Kate stood to the side and told him not to run her over. Her comment was something like: I’ll be very upset if I’m dead, but you have to jump in the middle. 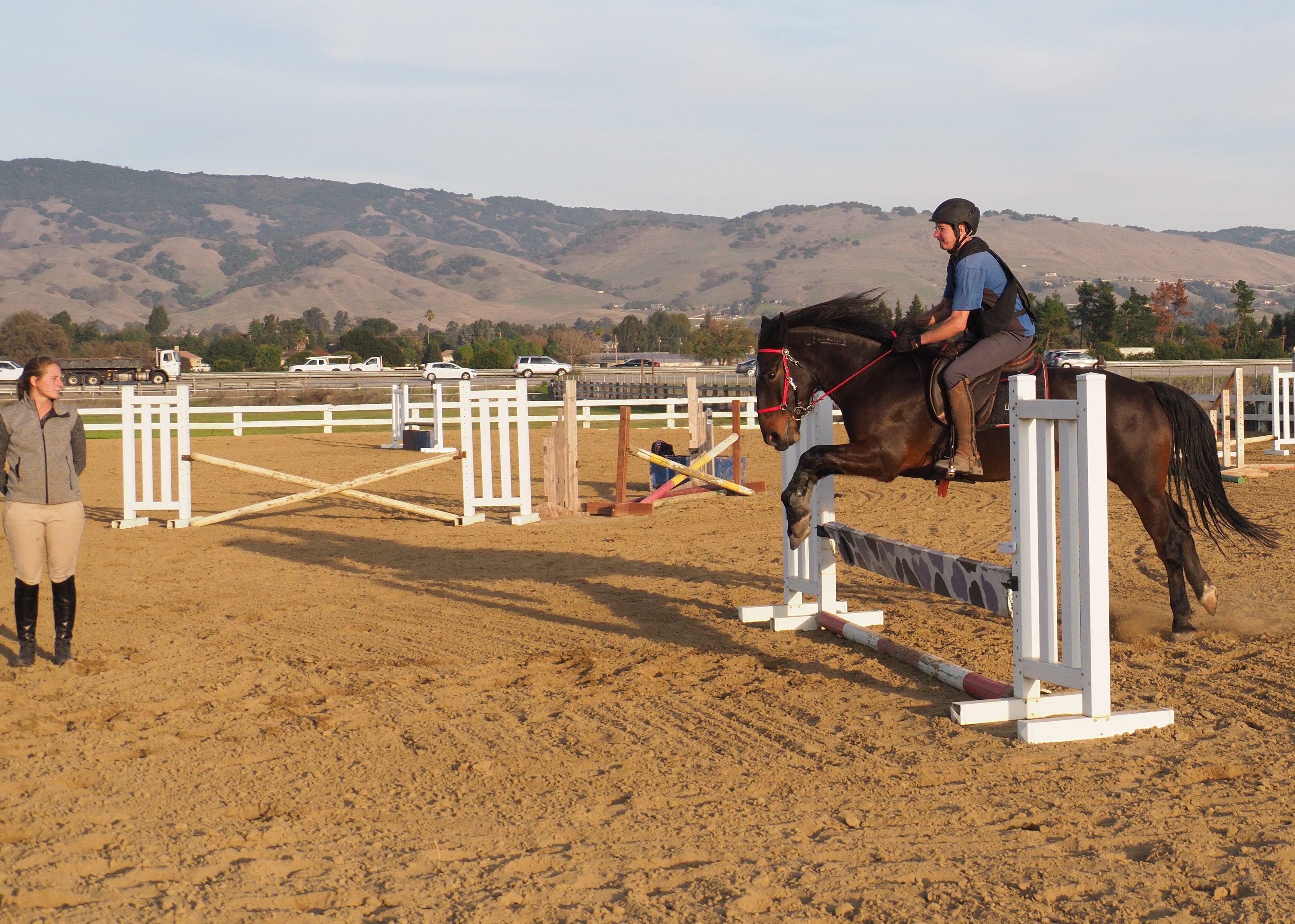 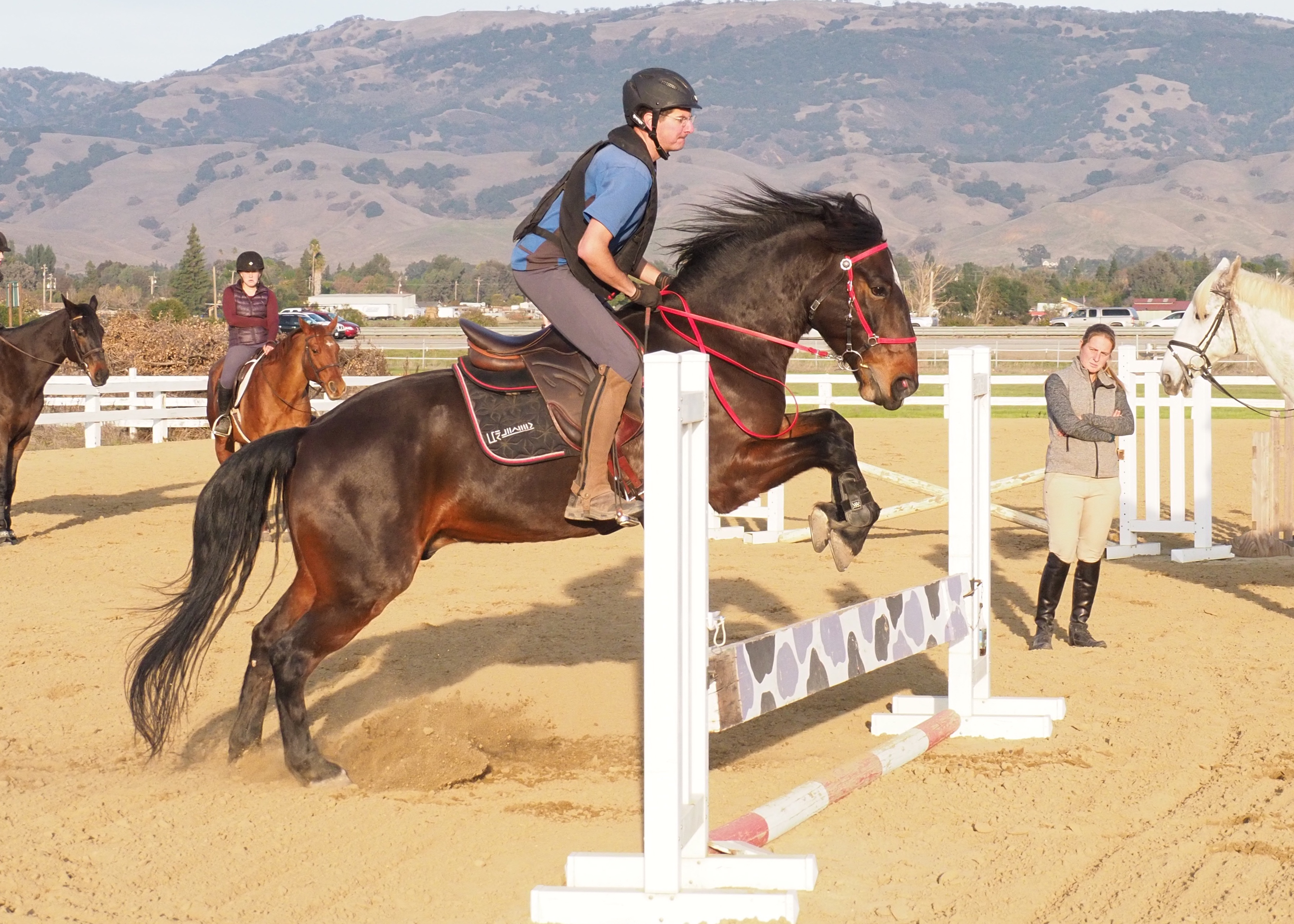 Next up was a fake ditch exercise. Ditches are probably the only thing this horse won’t jump on the first try. And this wasn’t even a real ditch, but a scary black blanket.My husband thought it wouldn’t be a problem, but I knew it wasn’t going to be that easy so I kept my finger on the shutter button.

Reasons to not lean 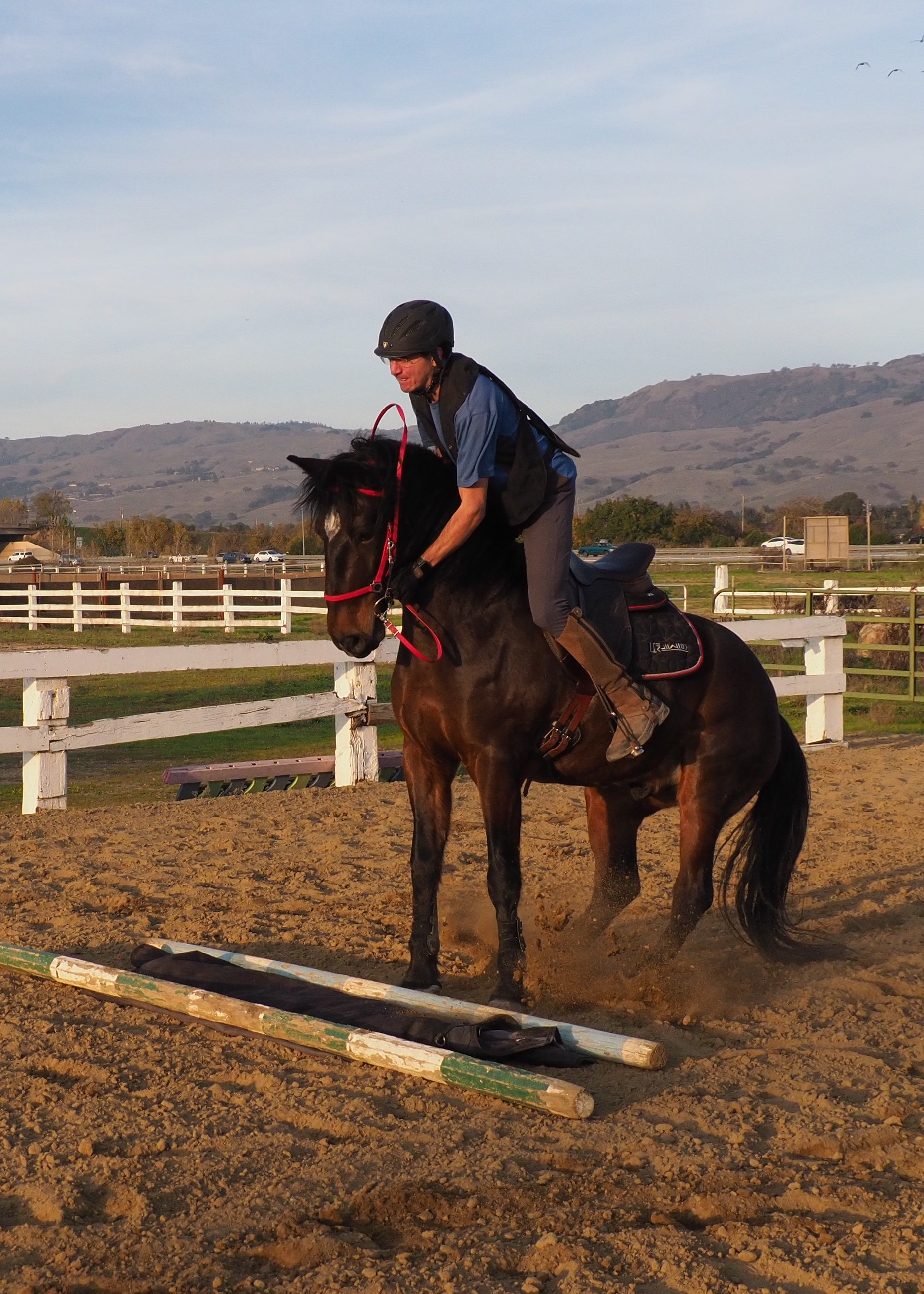 The next attempt was even funnier because now Eugene knew it was coming and had more time to prepare. 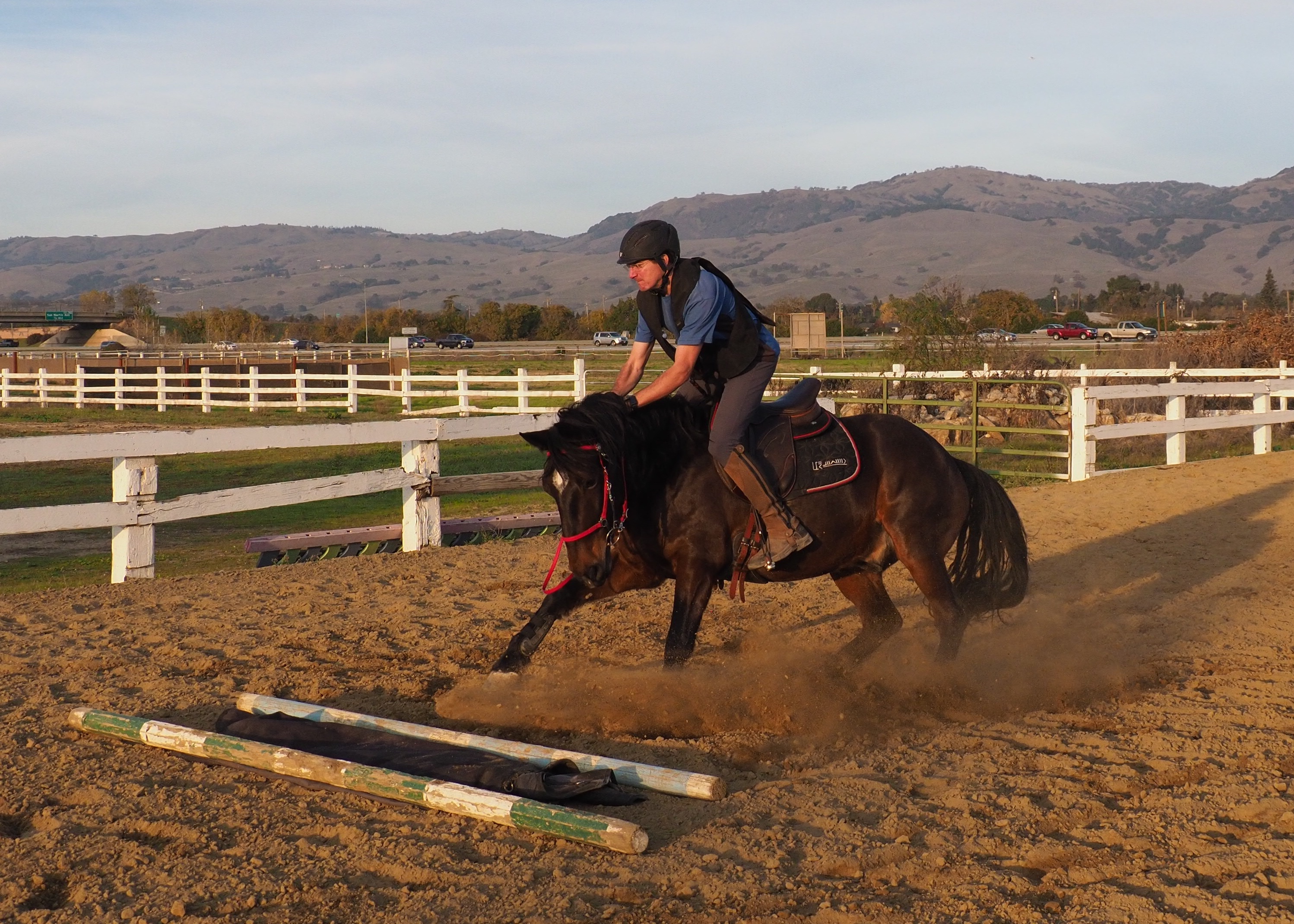 The third time was the charm, although Eugene made sure not to touch it. Just in case. 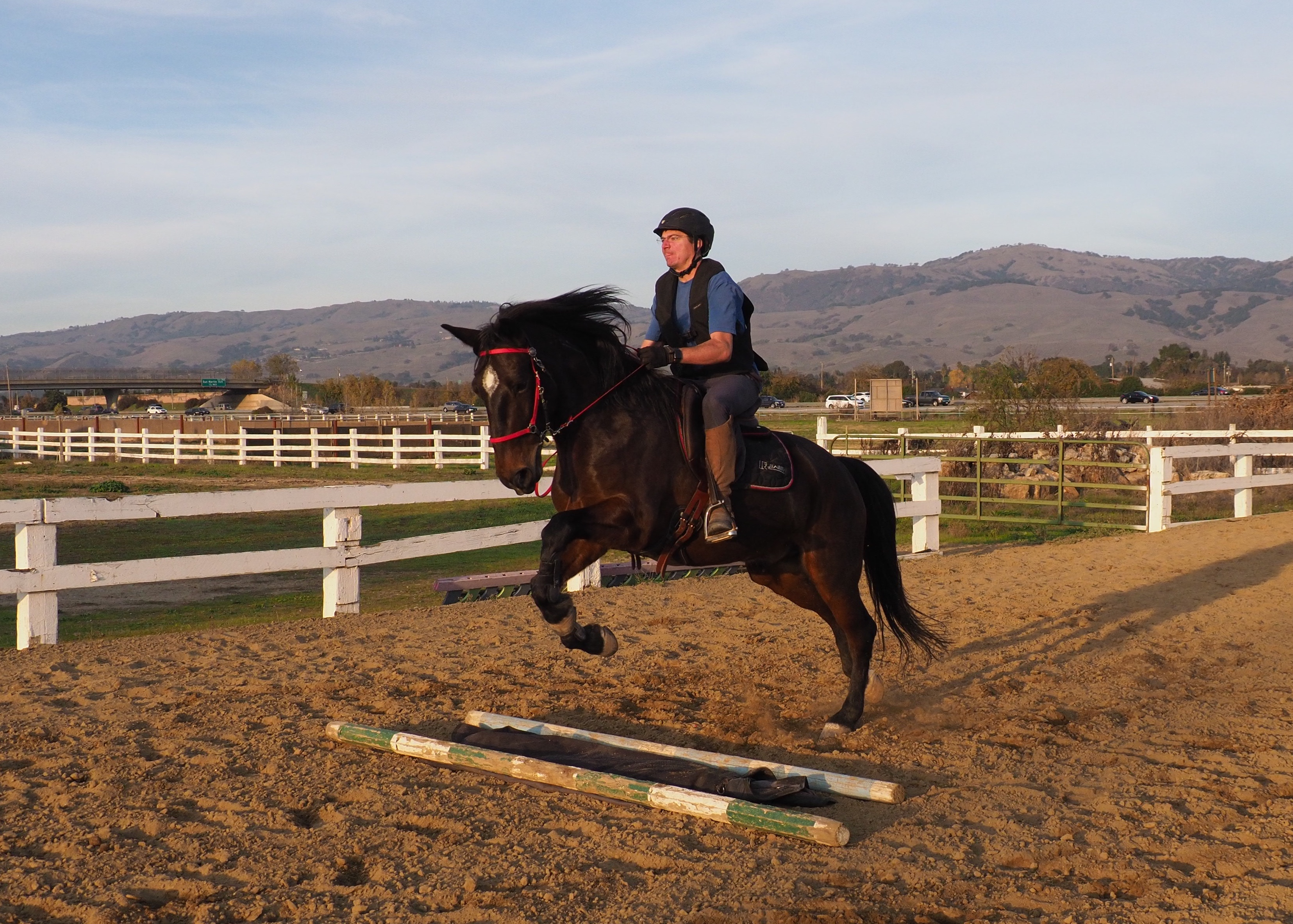 Once they’d mastered the ditch in both directions, it was time to do a whole course. The jumps were raised and the first time they came around to the vertical, Eugene decided to go with the old mantra of “when in doubt, leave it out.” 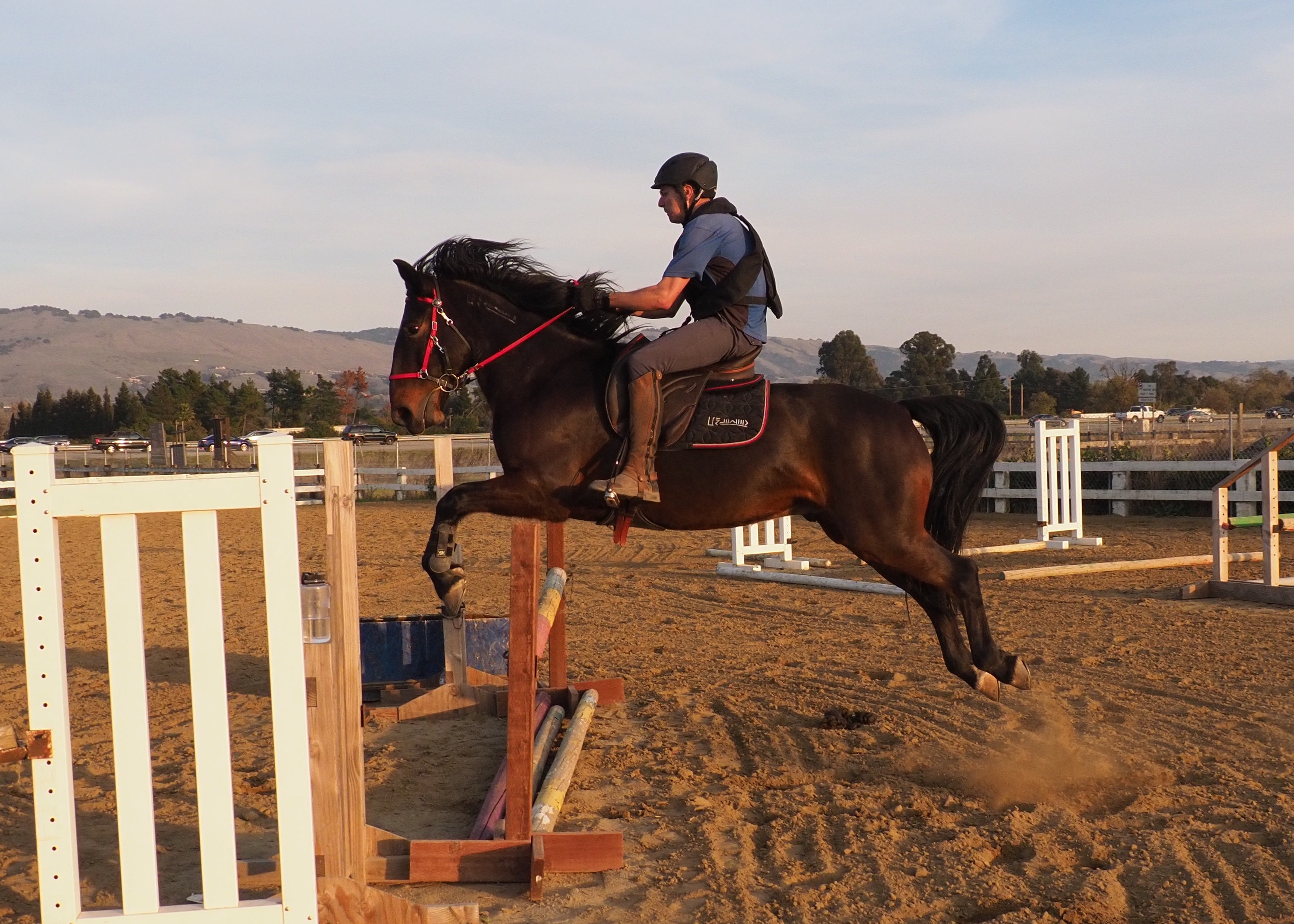 This horse likes to chip in even when there isn’t room so no one was expecting that. My husband certainly wasn’t and got completely left behind. Eugene was a little sticky to the next jump (I think a little unsure after getting caught on that vertical), but he had his confidence back in time for the oxer.

Then we moved the fake ditch to a new spot and Kate made up a new course including it. Even in the new place, Eugene was now bored with the fake ditch and couldn’t even be bothered to not step on it. 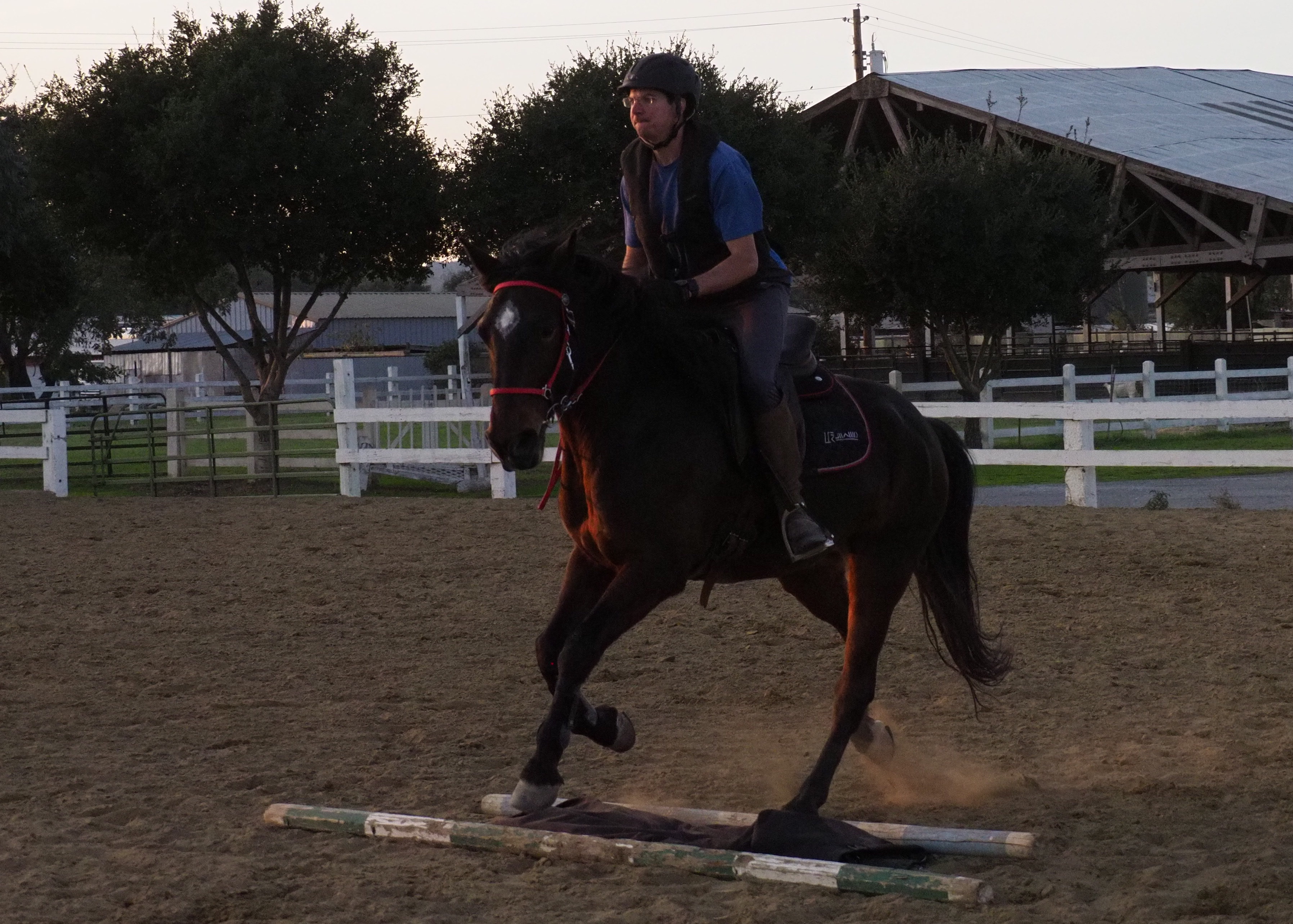 The rest of the course went pretty well with Eugene bravely bouncing over everything. 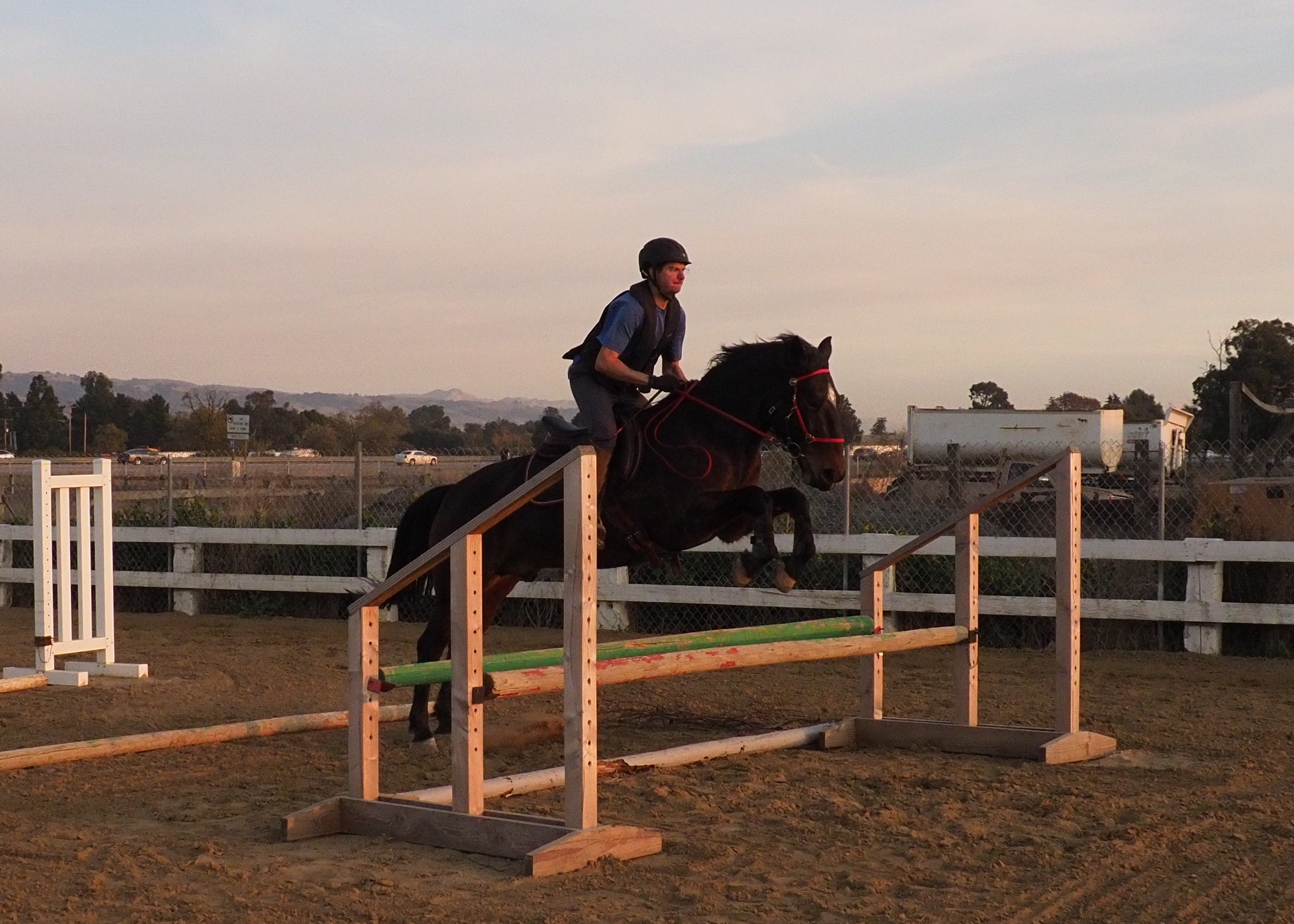 As you can see from these last few pictures, the sun was fading quickly at this point. When the lesson was over, we put a cooler on Eugene while we got him untacked and everything ready to go. Then we loaded him up, hopped in the truck, and… nothing. The truck wouldn’t start. We tried jumping it, but the battery wasn’t dead and it wasn’t even trying to turn over. It sounded like the starter wasn’t working. The barn owner got a hammer and tried hitting the starter for us, but no luck.

I’ve been a member of U.S. Rider for 3 years now and I’ve never used them, but they did come in handy that night. It took them a long time to find someone, but eventually they got us a tow truck that could take the truck and the trailer. They were willing to take Eugene in the trailer too and drop everything at the barn. However, our barn has some low strung wires and we didn’t think the tow truck could get into the barn with the truck on top of it. Thankfully, Kate’s barn was willing to keep Eugene for the night and we had the the truck and trailer dropped off at our house. The tow truck didn’t have much room for passengers though so Kate had to drive me home. Poor Kate. One of our barn-mates was able to pick Eugene up the next morning and take our trailer from the street back to the barn so we wouldn’t get ticketed. We’ll have the truck towed to a shop this week.

While it was a pretty sucky way to end the day, I’m grateful that this happened where it did. And I’m thankful to everyone who helped us out. U.S. Rider was valuale, but it really took a community to make it all happen: the barn owners that fed and housed Eugene for the night, Kate taking me home, our barn-mate picking Eugene up and taking our trailer back. That said, I will definitely be renewing my U.S. Rider membership!

Don’t forget to enter the contest to win an equestrian surcingle belt.

20 thoughts on “Another Jumping Lesson”