On Saturday we hit up a dressage schooling show with a Fix-A-Test clinic option. We each got 20 minutes to ride the test and then work with the judge to improve our ride. I also signed us both up to ride the test again later. We had awesome times with our first test starting at 12:15 so we even got to sleep in. Kind of. At least, comparatively. 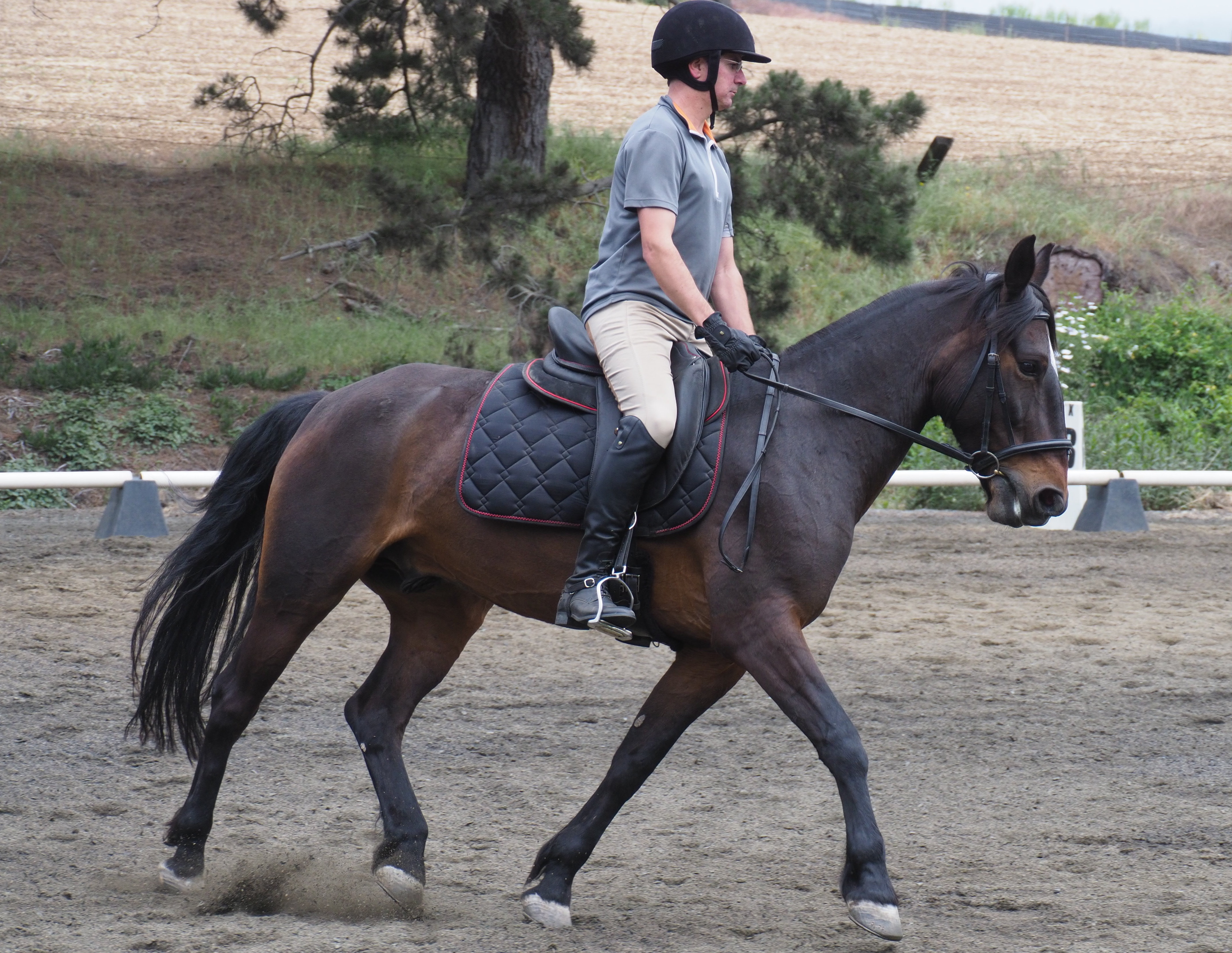 My husband was up first riding Novice A. Most of the test went pretty well. The serpentine is an movement they’ve been working on, but it’s not 100% yet. Eugene is still in the beginning stages of staying connected. He can do it when he’s doing something he’s comfortable with like going straight or circling, but as soon as the task gets difficult, he’s like “too many things” and wants to abandon connection first. In the serpentine, the change of bend was too much work.

The next issue they had was getting the left lead. This was a surprise since they’ve never missed a lead at a show before. My husband didn’t even notice he wasn’t on the correct lead and they proceeded to get a 1 on that movement. 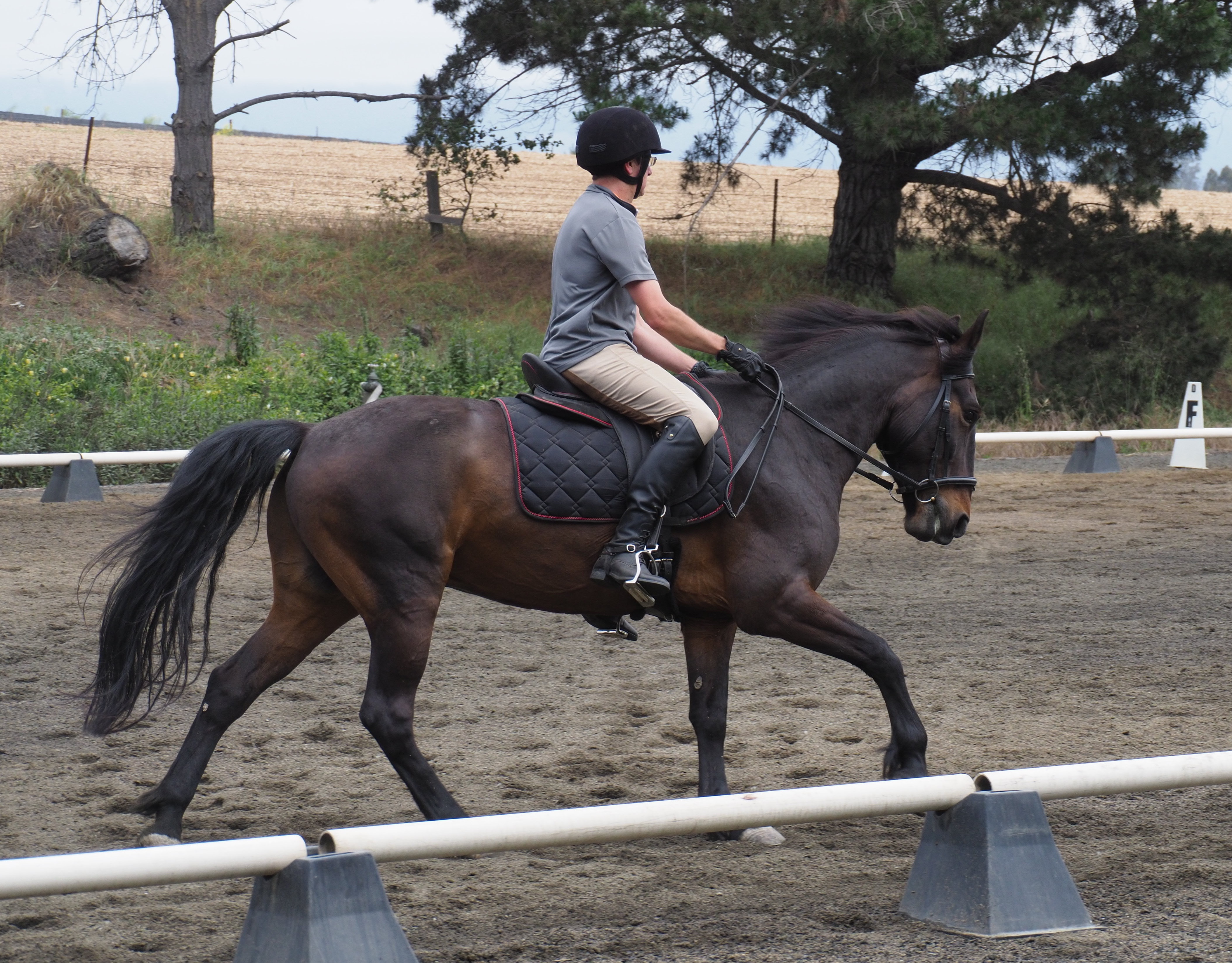 Unsurprisingly, most of their remarks were about connection. After they finished, the judge took a moment to finish up comments and scores and then talked to him. She started by asking what they thought had gone well and what they thought had gone poorly. She asked if he realized they were on the wrong lead and he said he suspected. She got after him about that directing him to look if he suspects and then fix it even if it takes the whole circle. Otherwise, he’ll get a 1. 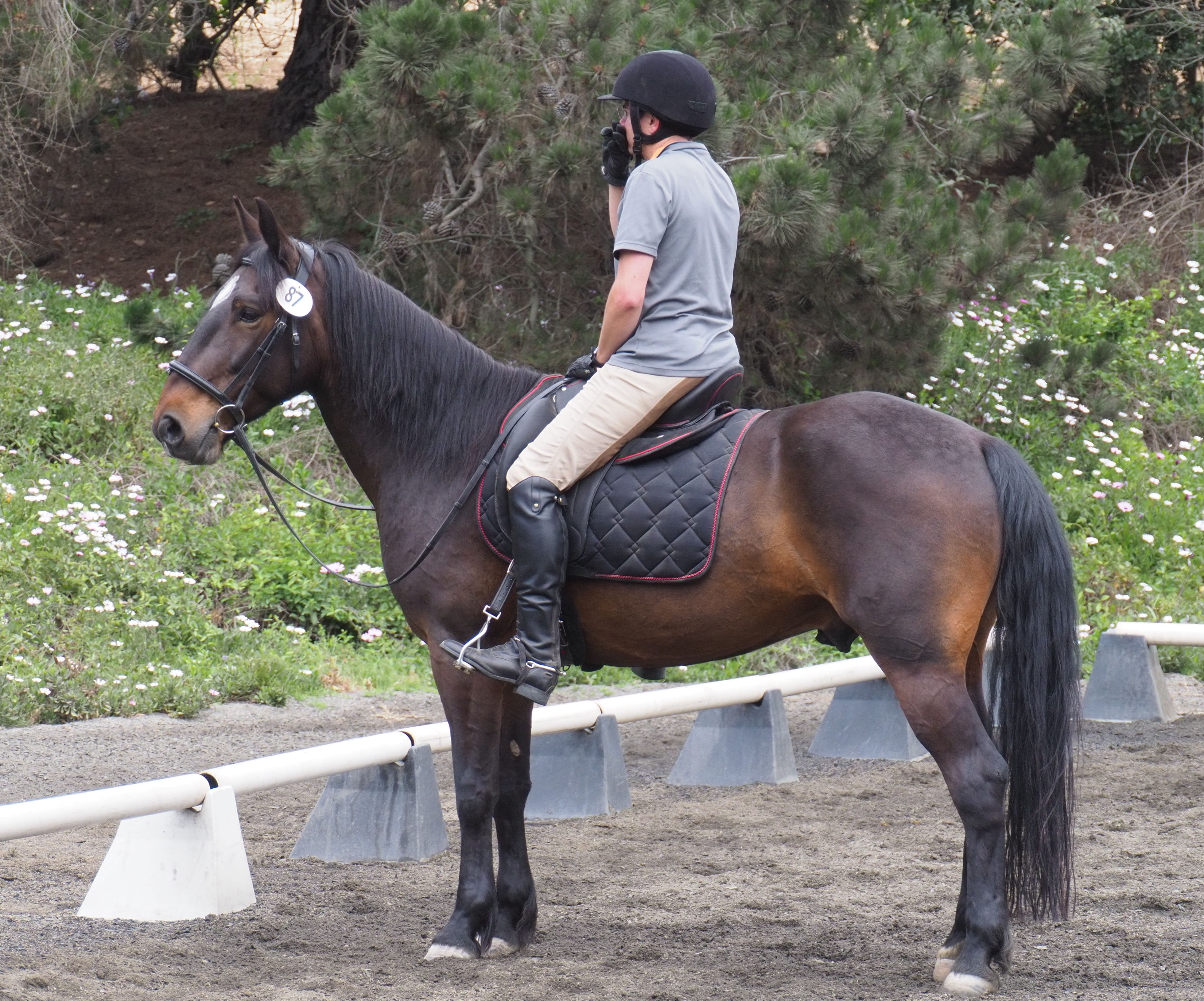 talking to the judge

To help him with the connection she had them do a 20 meter circle at the walk and work on slowing down. 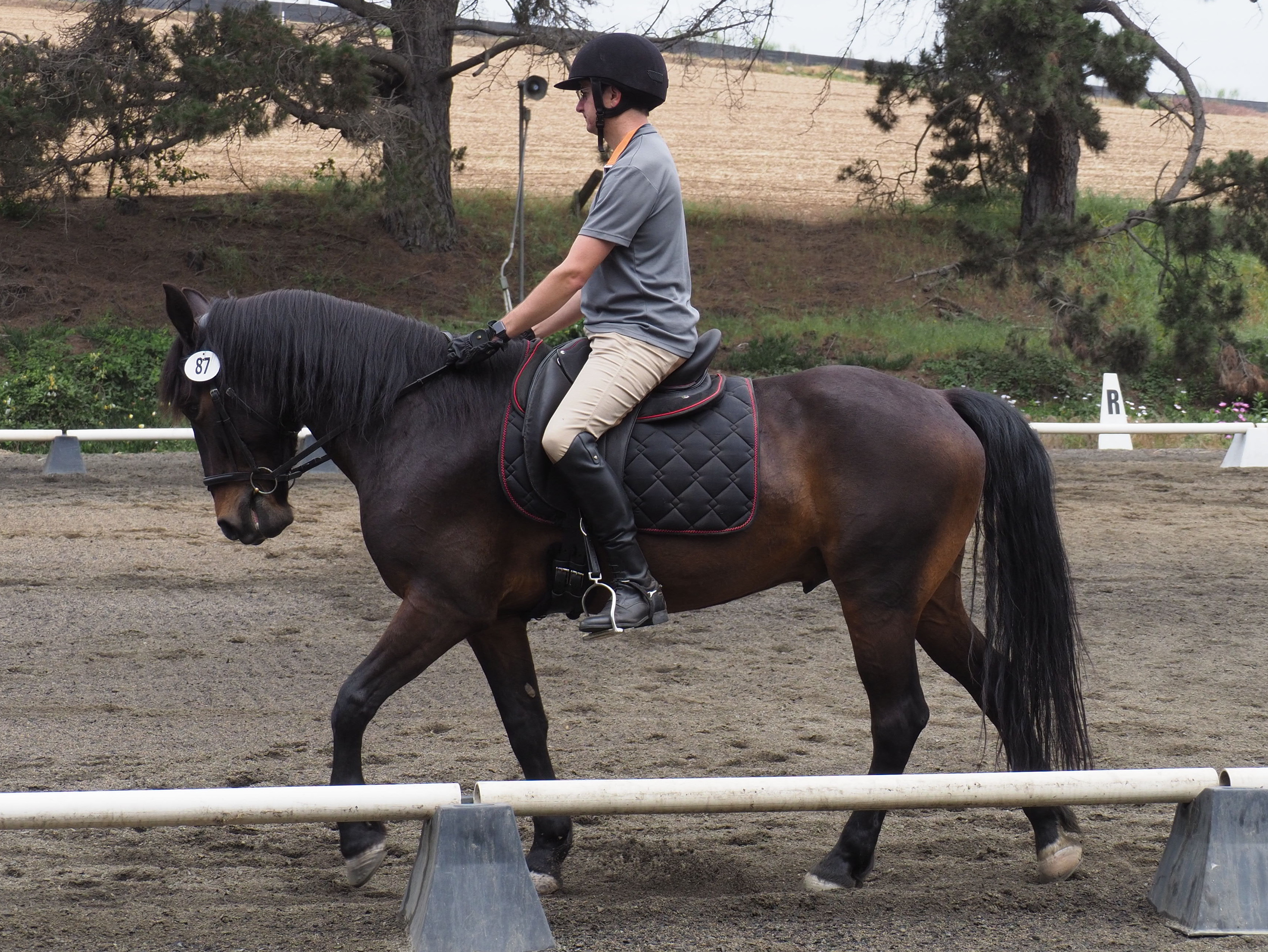 She kept asking them to go slower and slower until my husband was creating the walk instead of Eugene pulling him along. Once he was creating the walk, she directed him to play Eugene like an accordion – pushing him up and then bringing him back. Once they were finally really connected at the walk, she had them trot. Anytime he tried to throw his head up to evade the contact, she told him to put more leg on and push him forward. 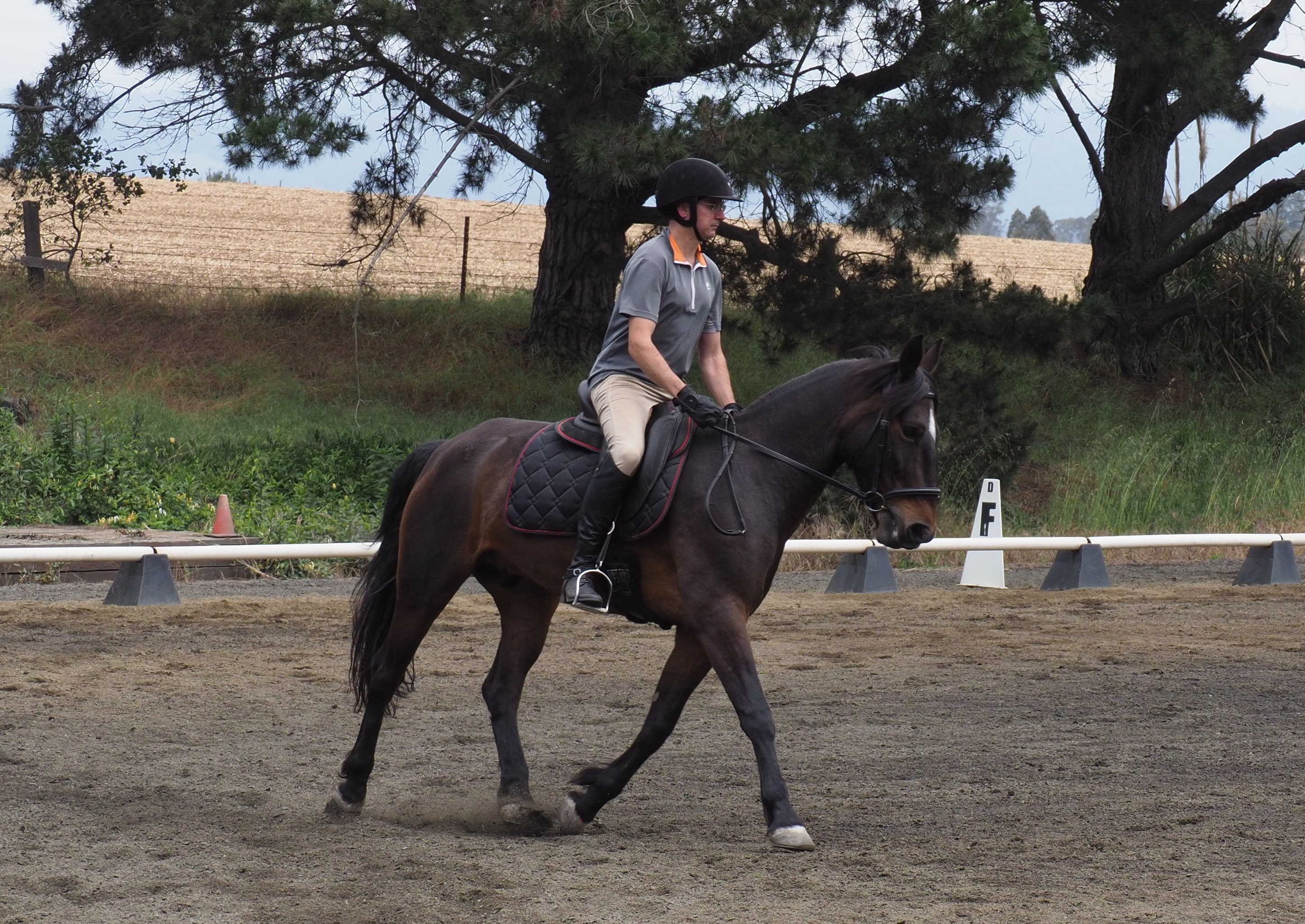 You mean add leg is the answer to everything?

Once they got that going, she had them try a few canter departs and Eugene was like, LOL, what is this left lead you speak of. 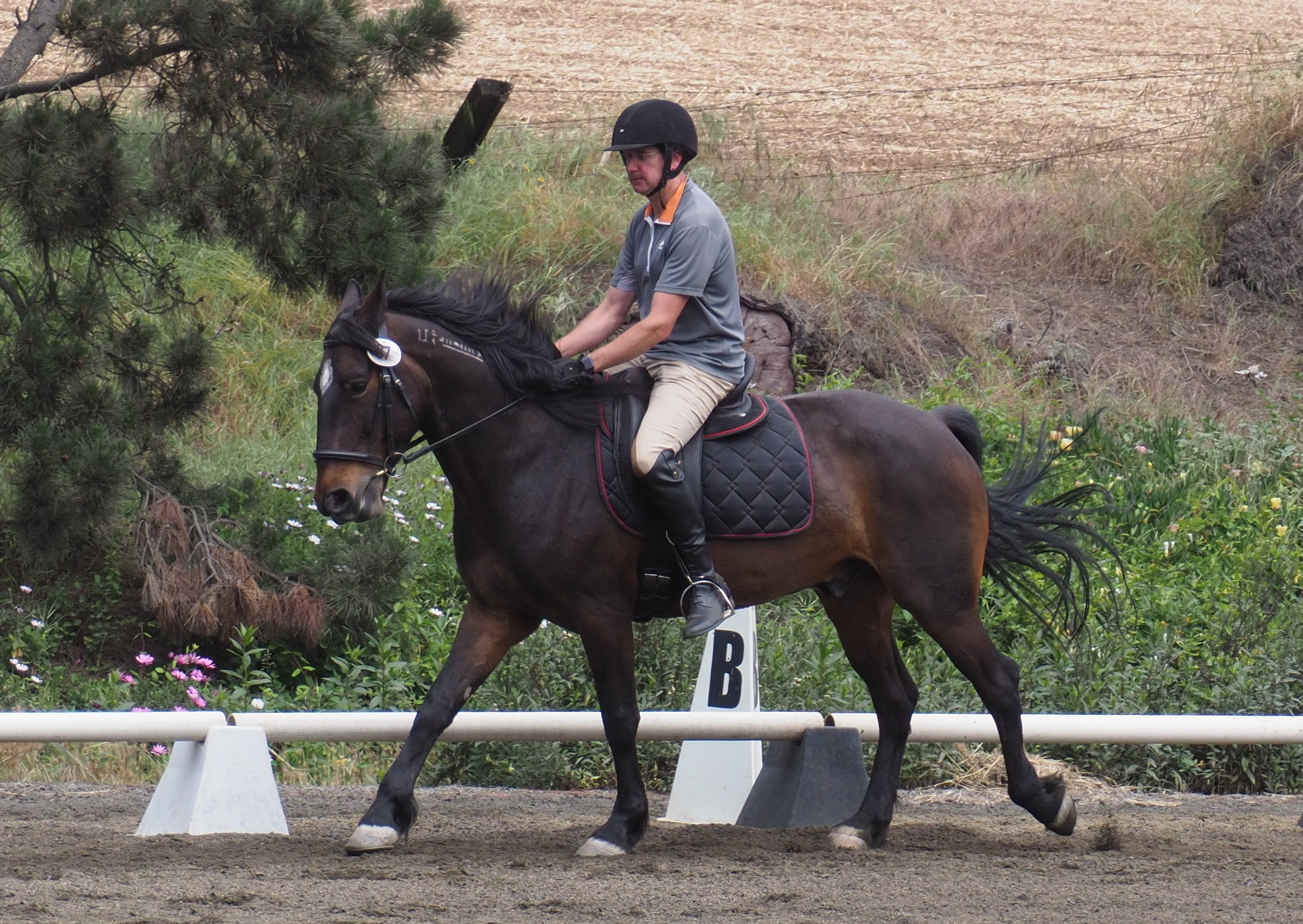 I’m not sure what’s up with him but I think it’s probably related to the canter depart being in the middle of the ring without the corner to help. He also might need another chiro appointment. A few rounds of practice produced some nice, connected canter and then their time was up.

My husband came back about an hour later to do his second round of Novice A. They still had an issue with the left lead canter, but this time they fixed it for a much improved score. 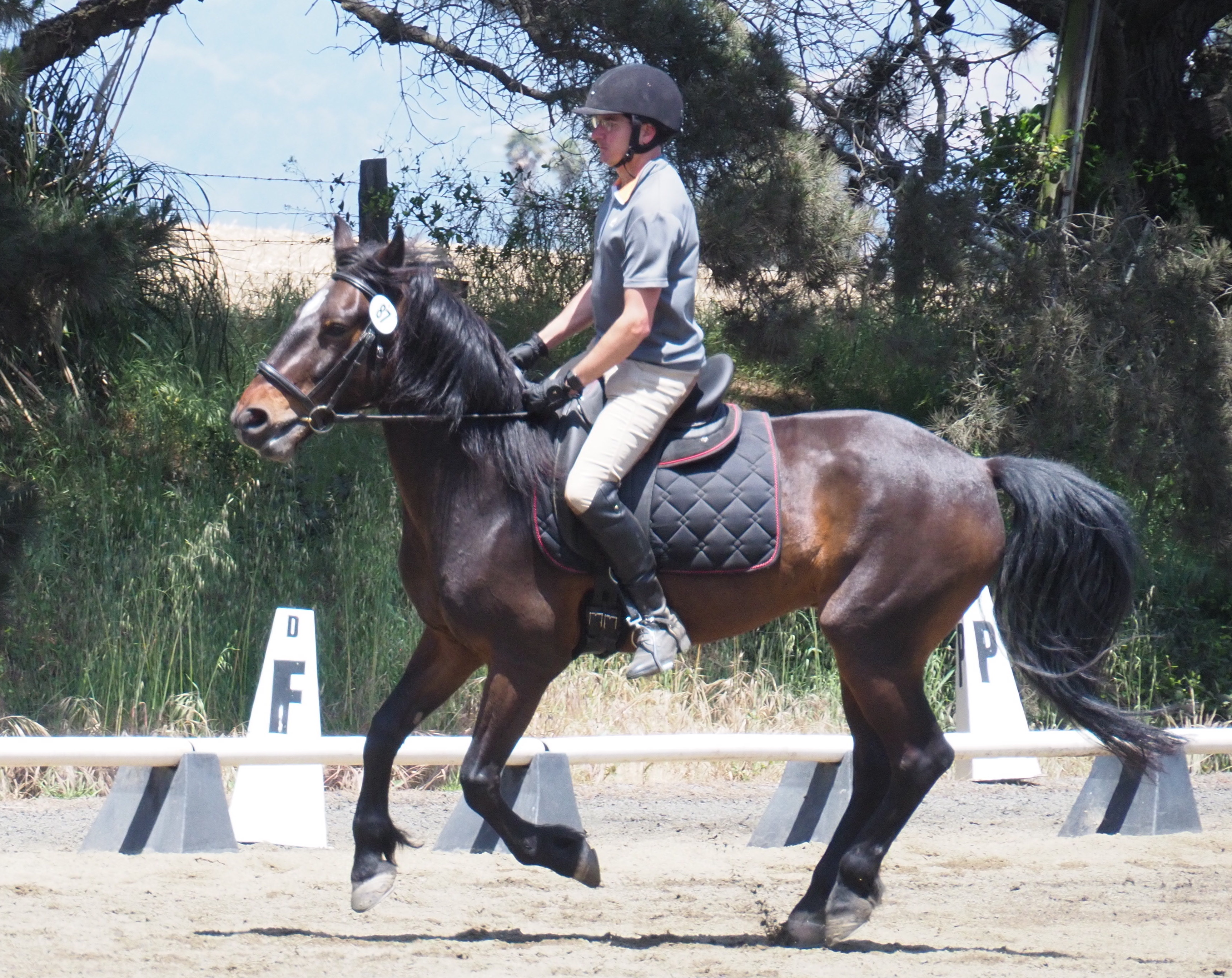 With the improved connection, the whole test was better and the judge even commented on their improvement. 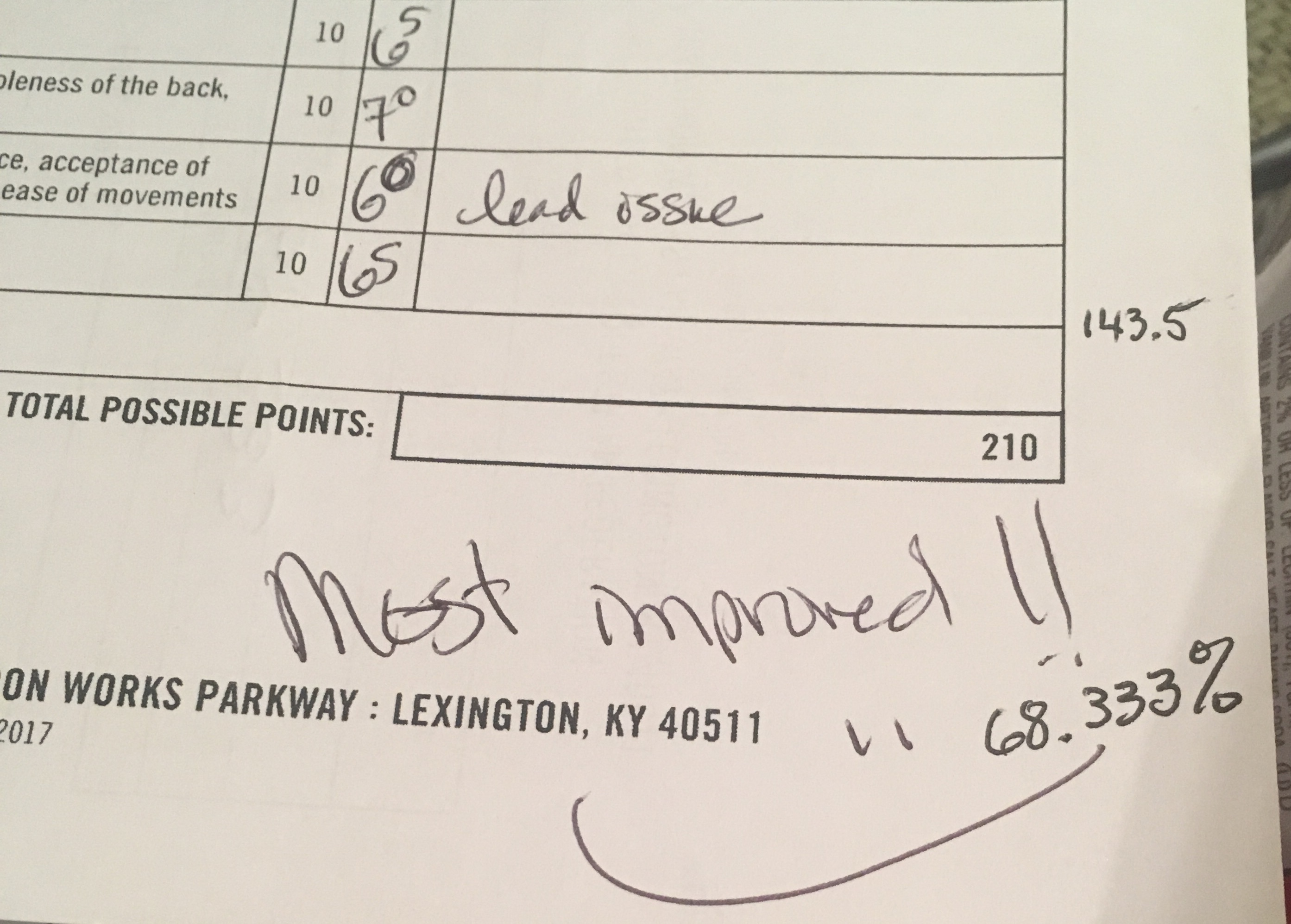 They went from a 58 to a 68. Admittedly, the judge was a bit generous. She even gave them a 9 on their final halt. 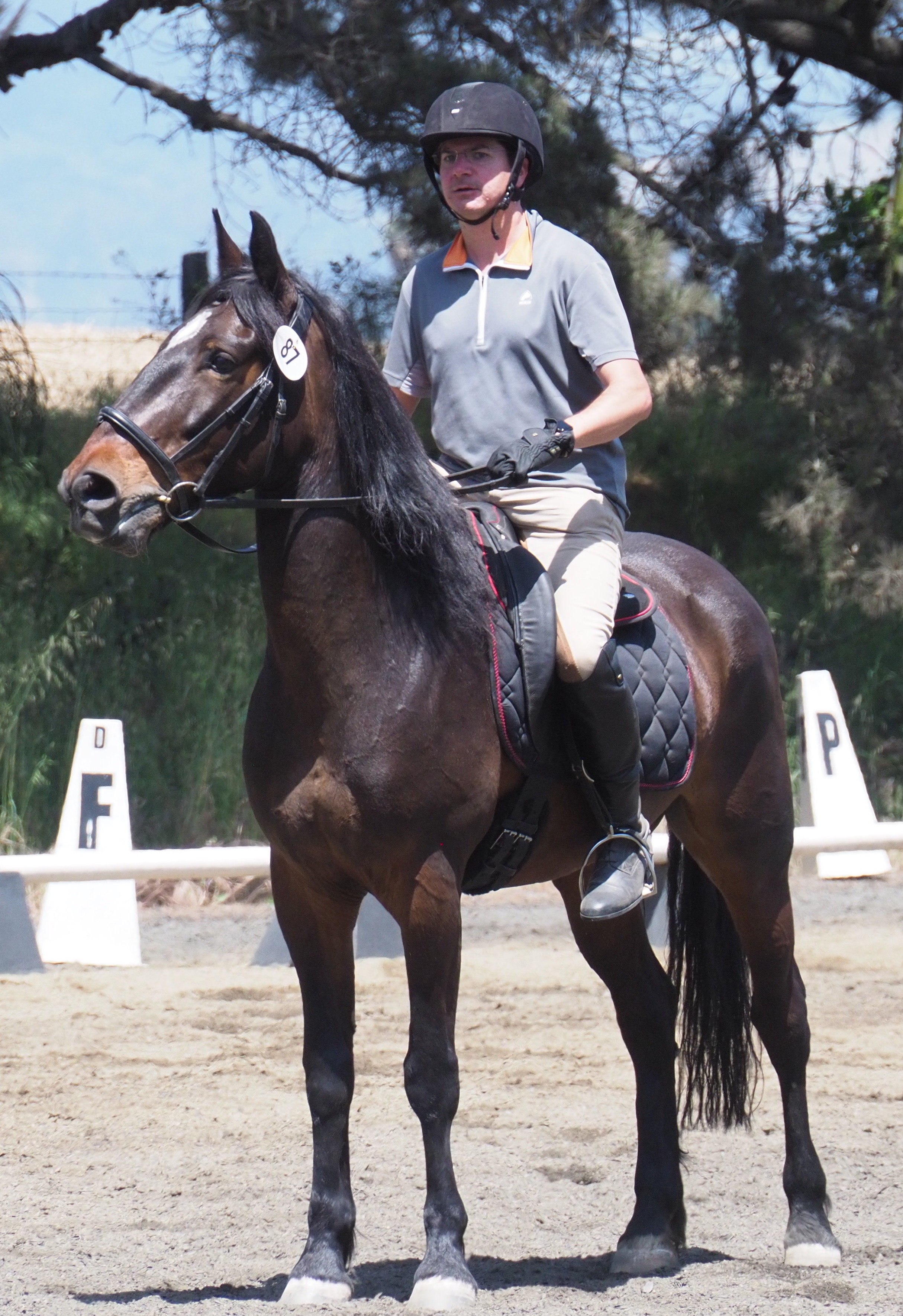 Eugene is about 0.5 seconds from screaming

This scribe’s handwriting is perfect in every way

My husband and I both felt like the ride-a-test clinic was amazing. It was absolutely worth the cost to get that instruction straight from the judge. This judge also regularly judges at the local rated horse trials so it was nice to learn from someone who knows eventing. She even told my husband she used to event when she was younger and Eugene reminded her of her own jumper. 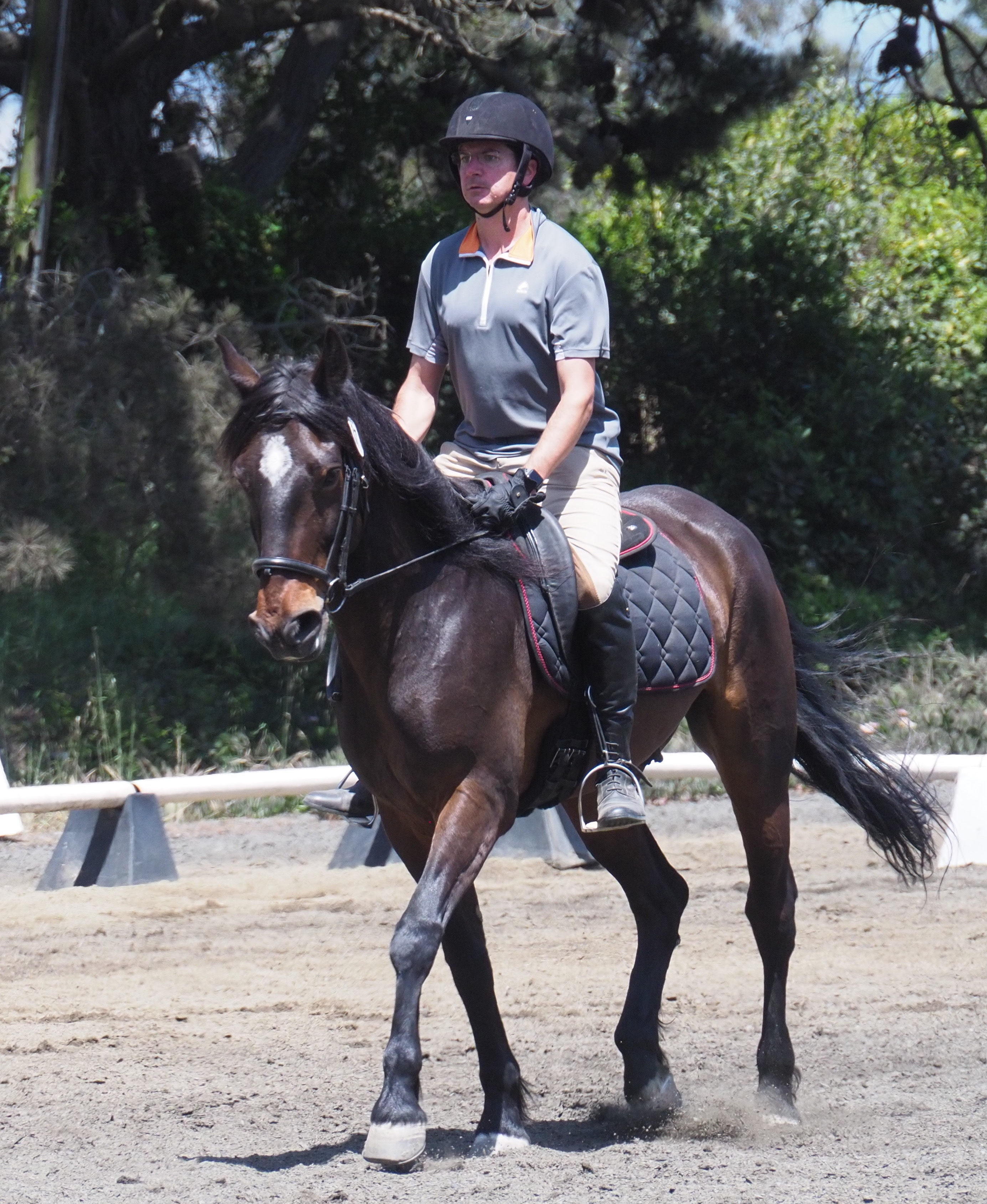