I had originally planned on riding Levi bitless for the jumping portion of the clinic, but when I pulled him out of his paddock and away from Eugene the combination of new place, separation anxiety, and a frigid wind blowing up his butt had me low-key flying a kite across the parking lot and I decided to bit him up. Adorably/Annoyingly depending on who you are, Levi apparently considers me part of his herd. According to my husband, when I close the trailer door to change and left him with just my husband as company, he began screaming and jigging around.  I don’t know whether to be flattered or exasperated. Anyway, with him all lit up, I not only opted for a bit, I added a running martingale… and a neck strap.

Add all the tack!

I was in the Pre-BN group. Ashley started off again with asking what our issues were and what we wanted to work on. I told her that Levi’s jumping was bipolar. When he’s good, he’s really good, but when he’s bad he’s a nightmare. I wasn’t sure who we’d have that day.

We started off with a little trot pole grid, which Levi happily cantered through and I got yelled at for. Of course my husband didn’t capture this on video because he was off helping Kate with something else and I had to go yell at him for that. Ashley really wanted me to look at the first pole (and then the rest of the poles) and I had a ridiculously hard time with that. I don’t look at jumps. Like, I have been trained for almost 20+ years not to look down at the jumps (or poles) and one session of being yelled at is not going to fix that. I could see her point with the poles though. Because I was just looking through and past the poles, Levi was just racing through and out instead of balancing and lifting over the poles.

Then we started going around trotting over little cross rails. Levi and I were both kinda bored with that. He was being good though so I pulled his martingale off. And then one of the other girls in my group needed a neck strap so I loaned mine out because clearly I’m not using it:

When in doubt, go full t-rex with your arms.

Levi was being good, but he wasn’t really picking his feet up or jumping nicely because the little jumps weren’t challenging.

The first time we came around and did the oxer and he actually lifted his knees up, I could hear Ashley’s exclamation. He comment was something like “he’s actually a really cute jumper.” 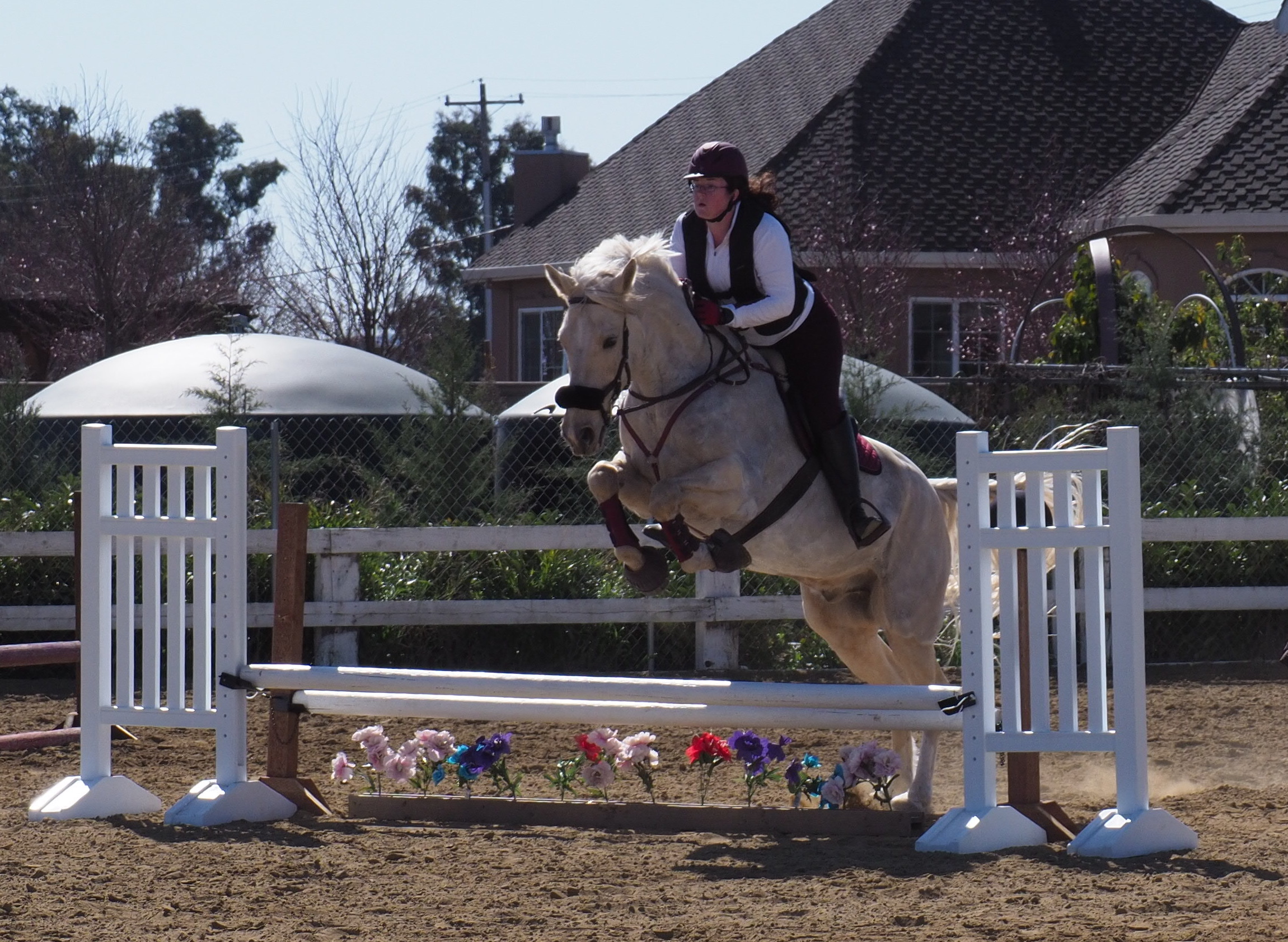 Yeah. Cute has never been our issue. Of course, as with Friday, Levi was on a mission to prove me wrong; he was perfect. If Levi’s in a mood, he’ll might act up even at small jumps, but bigger jumps more often bring out the attitude. I was pretty sure he’d be good no matter what since that was the theme of the weekend, but I did mention to Ashley that he might just be behaving because the jumps were small.

While the jumps were small, the courses were not easy. Ashley changes up the course every single time. If you mess something up, she might have you go again, but once everyone had gone, it was on to a new course. And the courses were tough with tight rollbacks and bending lines. Just remembering the course each time required a lot of attention and then it was tricky to ride them. But Ashley never stops talking. It’s awesome. She just carries on with a constant run down of what you should be doing, how you should be doing it better, what do fix, etc. The advice is rapid-fire and intense. She expects you to do it and do it right away. Some of the other riders were a little less enamored of this methodology, but I love it! I appreciate an instructor that gets after me about things so that I can actually fix them instead of just letting me get away with crap. 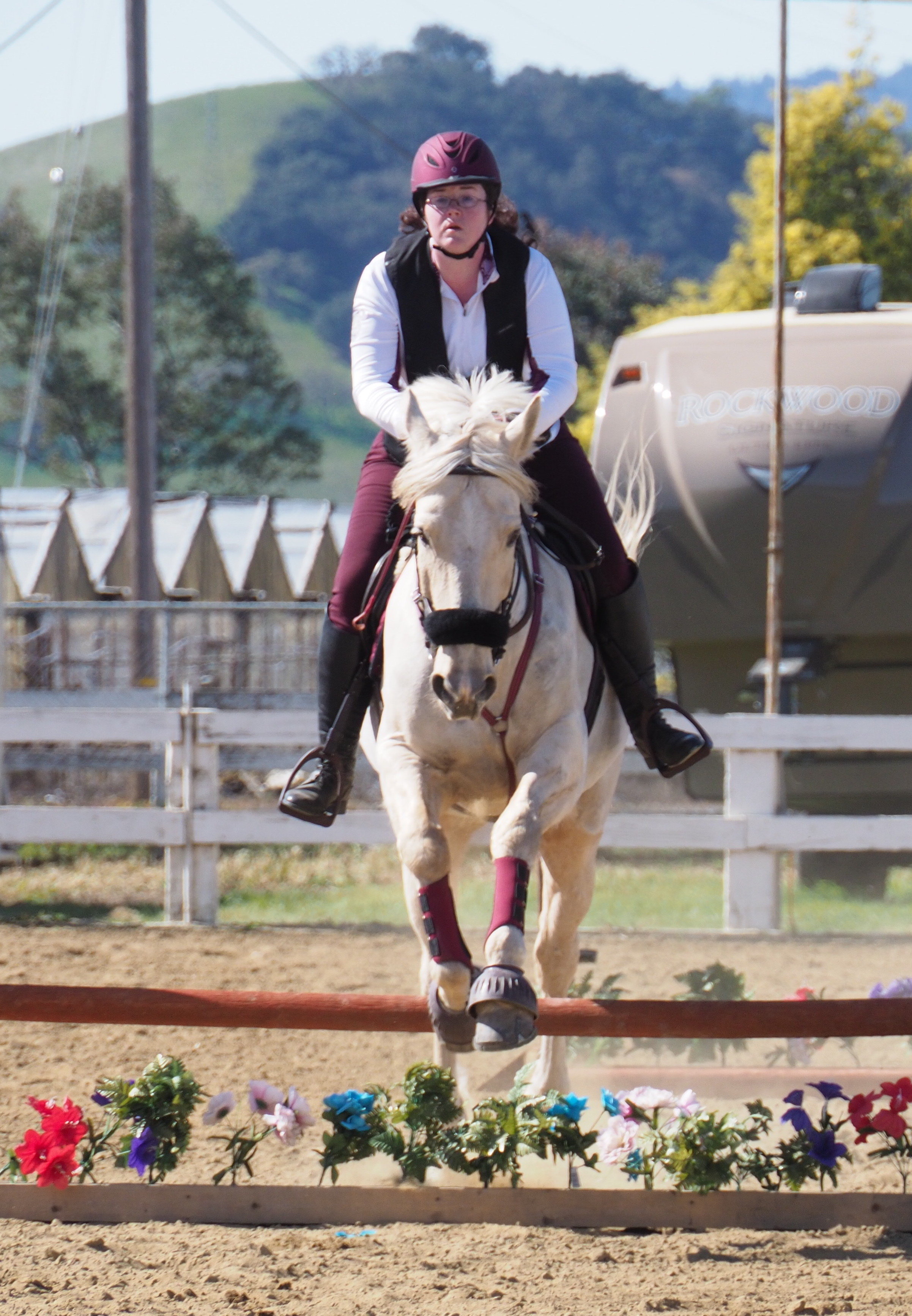 Like what the hell are my legs doing?Near the end, Ashley asked if I wanted her to raise some jumps for us and I said yes. I asked if she could raise the line and explained that we had been eliminated at an event after we got refusals at each second jumps in a line or combo because Levi was so busy bucking after the first jump, he wasn’t prepared for a second jump. Ashely paused and asked, but you’ve done BN before? Well, I have entered BN before, but we’ve been eliminated because of jumping issues. Her response was “you could not have paid me to guess that.”

He’s so cute with his little knees and his little ears… and his lack of understanding of how tall that jump actually is. #blmmustang #horsesofinstagram #eventing #horsejumping #horsebackriding #horseclinic #horselife #equestrian

She raised the jumps a bit and we did them without issue, because of course we did. I thought I was done and my husband had gone off to get Eugene when Ashley asked if I wanted to do another jump she’d set up. It was a really big (to me)  swedish oxer (a different one that above) and I said sure even though it was terrifying. Of course, Levi jumped it huge and nearly bounced me out of the tack, but we cleared it without any attitude. I really wish I had a picture of that one.

In the end, I got another lecture on my lack of appreciation of Levi. Ashley told me that both days I had started out by saying he was horrible and he’d been great. If I don’t like the horse, then sell him and get a different horse, but stop saying he’s bad because he’s awesome. Ouch. If you don’t like harsh truths, I’d advise you to think twice about clinicing with Ashley. I don’t blame her though. She’s literally only ever seen Levi on his best behavior. And this horse? The one that showed up this weekend? That’s the horse I want too. I just don’t know how to consistently get him and not his evil twin.

Such a freakin’ happy horse