My husband’s ride was immediately after mine so I missed the first few minutes while I was putting Levi away. When I came back, Ashely was setting up barrels and poles in a few places to mark the corners of a dressage arena. Apparently when he told her he was going to an event the next weekend, she asked if he wanted to run through his test and she could give him specific pointers.

While the light during my lesson was a bit tricky, it was very difficult to photograph in by the time we got to my husband’s lesson. The setting sun slanting through the arena meant that often only my husband or Eugene would be in the light, and rarely both of them. Thus a lot of my pictures look like this: 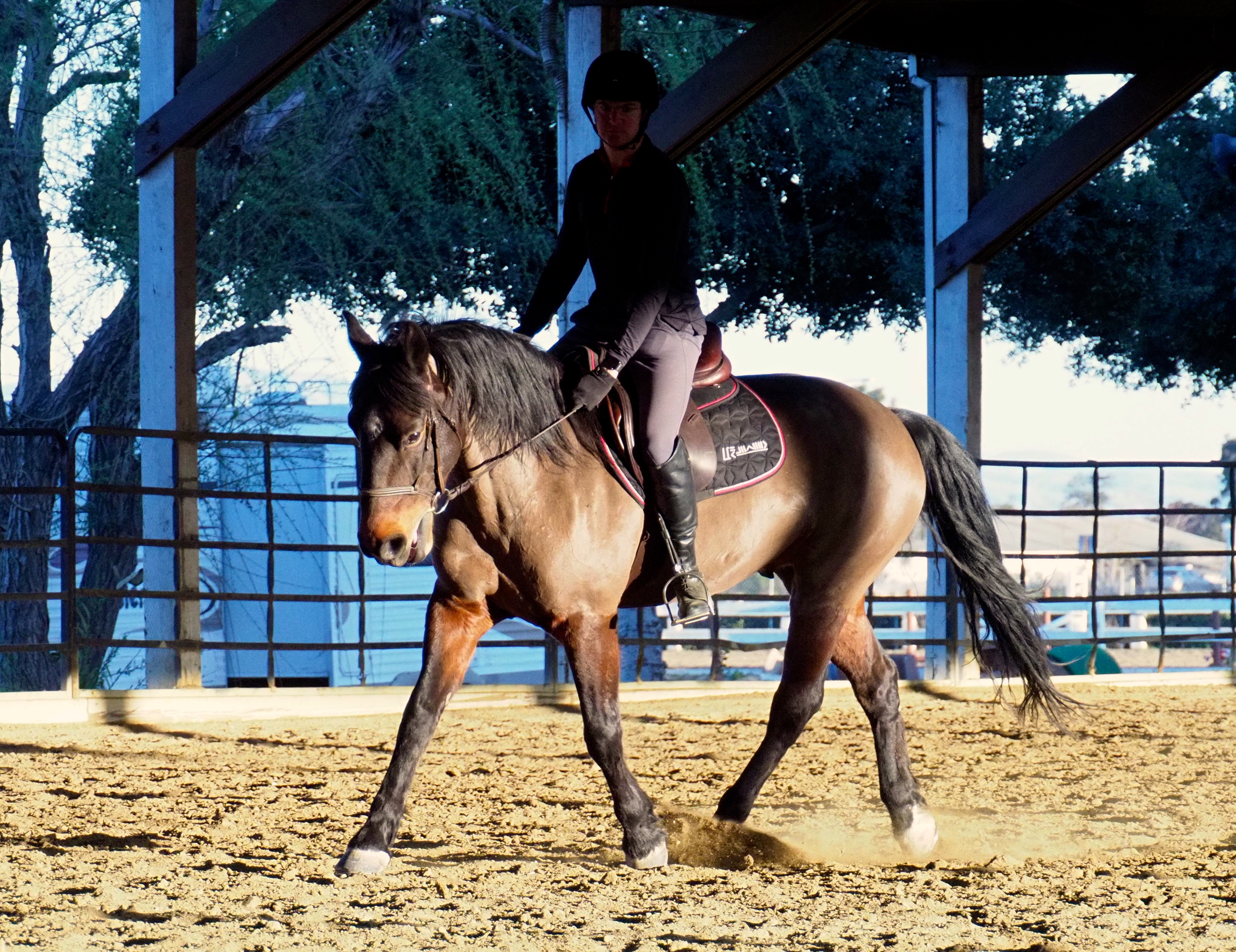 Ashley sat at A and had them run through the test with a few comments, but mostly just watching for the first run through. 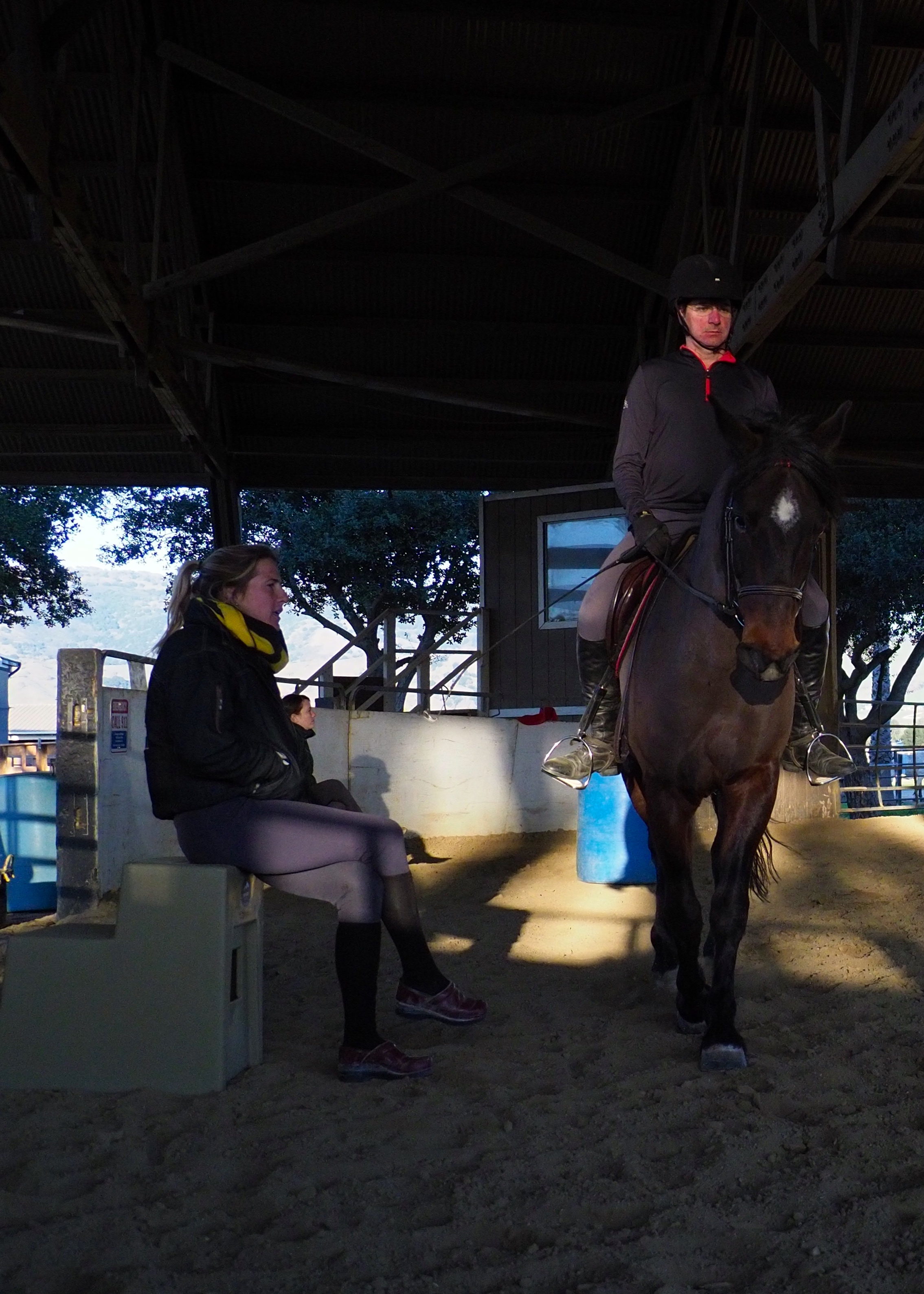 Then she started digging into various parts of the test. This was an interesting session even to audit as the 2018 tests are so new and different that it was great to have instruction on just how to ace those new movements. For the A-X-M entrance, Ashley went out to the X and physically walked through the geometry of how to ride the movement. Even though going from A-X-M is a right turn, you can’t turn right. since you are going left at M and continuing on to the left, you have to maintain a left bend. Enter straight and then as you get to X, go right by directing the horse to move to the right with the left knee and thigh, but the horse should stay straight in the body – there should be no right bend. You are just changing the angle of the horse’s path while staying straight and you should be straight by the time you hit M. 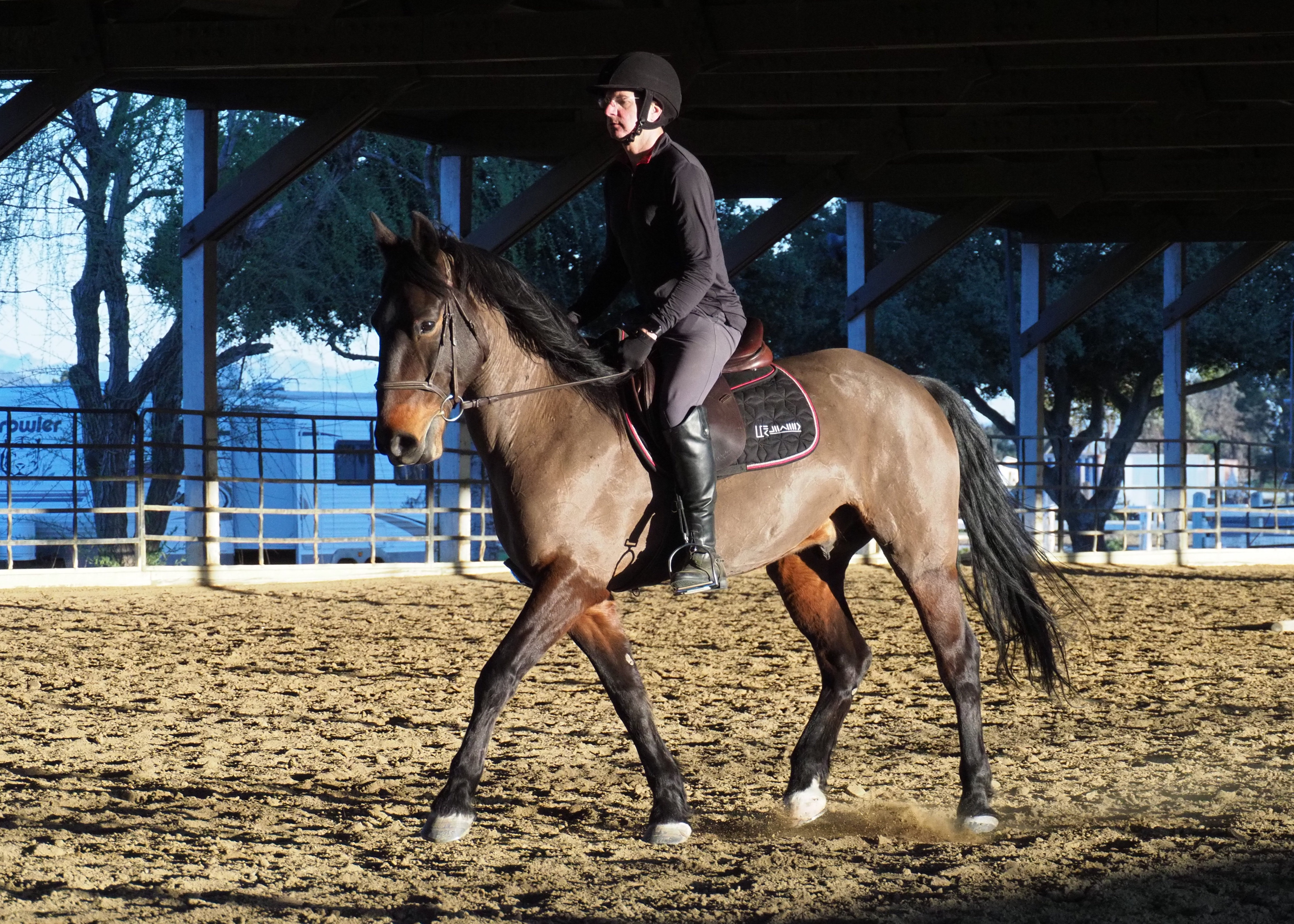 This is right after X and going to M – straight

The next problem they worked on was canter departs. My husband was skipping the corners before and after the canter circles at C. For example, going to the left, he was starting a 20 meter circle near M, curving away from the corner, picking up the canter somewhere in that curve, doing the circle at C, and then continuing on that same circular path to skip the corner between C and H and carrying on down the straight away. I actually called him out for this at the CVTSC Show, but – as usual in the world of husbands – my comments fell on deaf ears and this was new information when Ashley explained it. From the show: 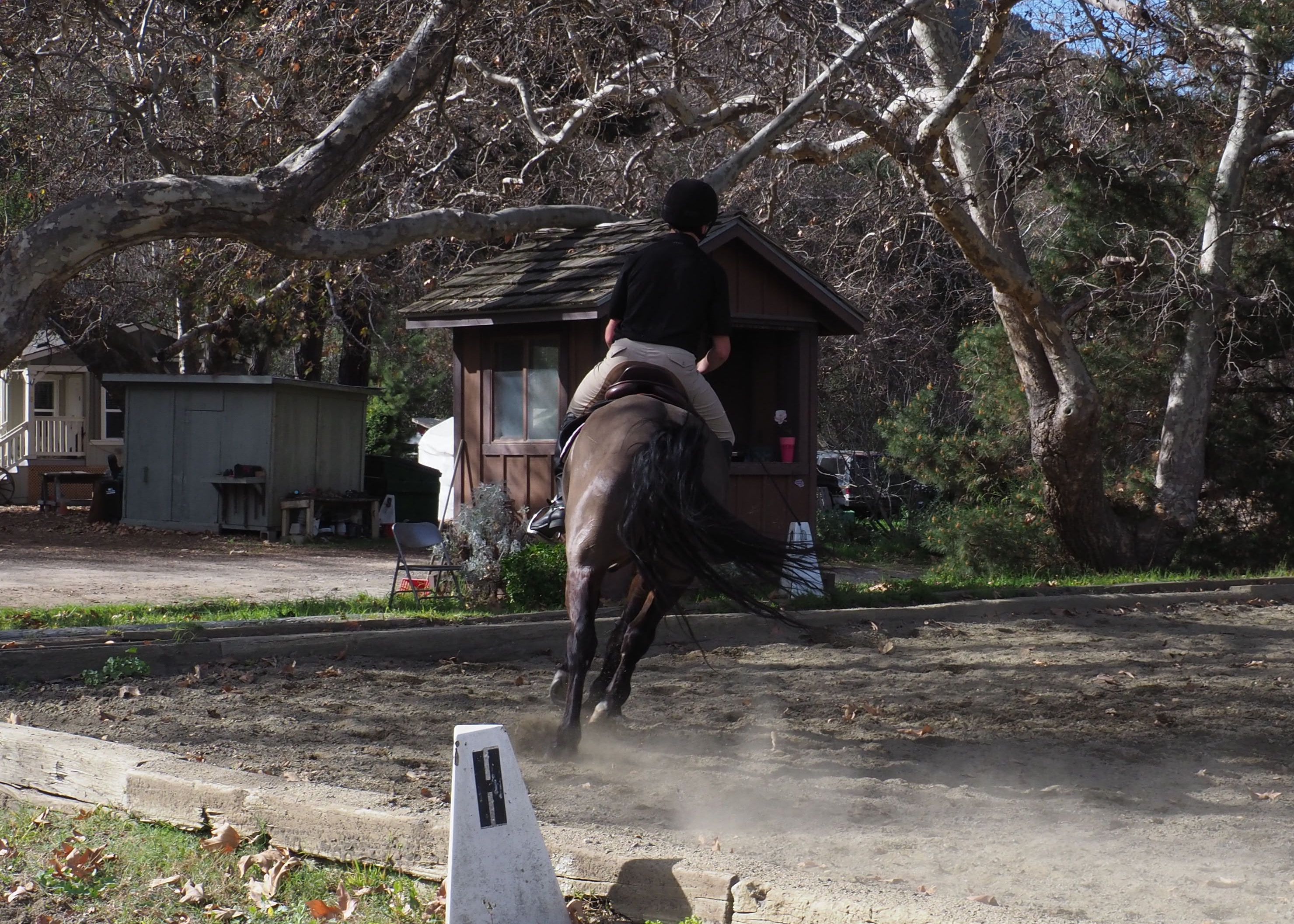 I’m surprised they didn’t get a comment on geometry here; they’re no where near the corner

To be fair, we had different points. My point was about the geometry being wrong; Ashley’s point was that the lack of geometry was making the whole movement more difficult. By going straight into the corner, and asking for the canter there, it’s easier to get the correct lead. Then you can get a few strides of straight canter (from corner to C) before you begin your circle. Finally, you take a few strides of straight canter between C and the corner before making your turn and then continuing to go straight into your downward transition.

Apparently due to lighting no pictures were taken of that transition so here’s a picture of a very nice, uphill, and on the bit canter. 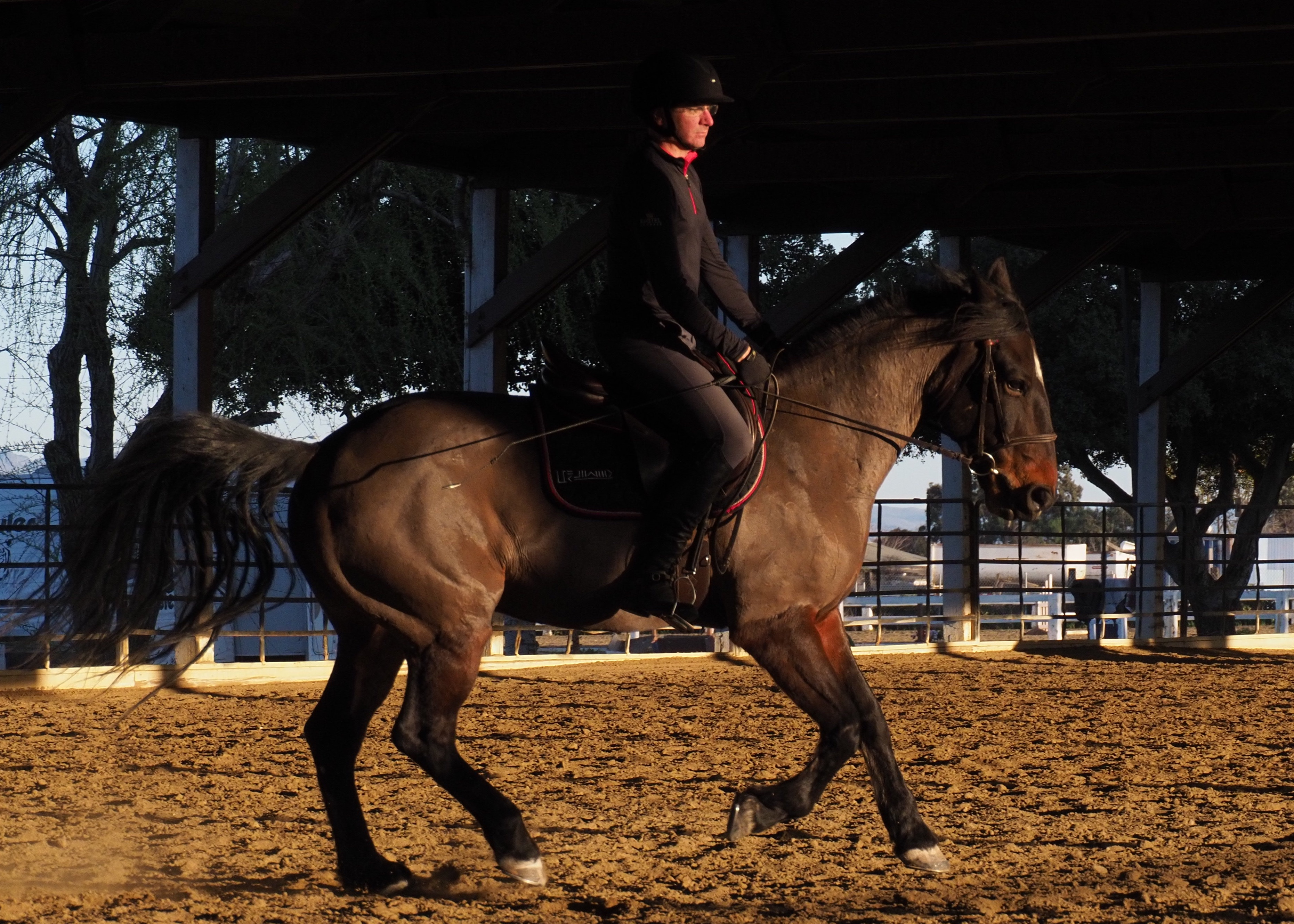 Another thing she really had them work on was mixing things up. Eugene is a clever boy and had memorized the test even before that lesson. He knows free walk leads to medium walk and then trot and figures he should just skip right to trot. He’d make it about half way across the diagonal before picking his head up and getting quick. Then he’d try to anticipate the trot and take off at A. So Ashley started playing a sort of “Simon Says” game – calling out things to do as they went through the test, mixing it up and really ruining all of Eugene’s expectations. Free walk from H to F, but 10 meter circle at X. Halt at A. Pick up canter along the long side, then back to trot. Things like that. 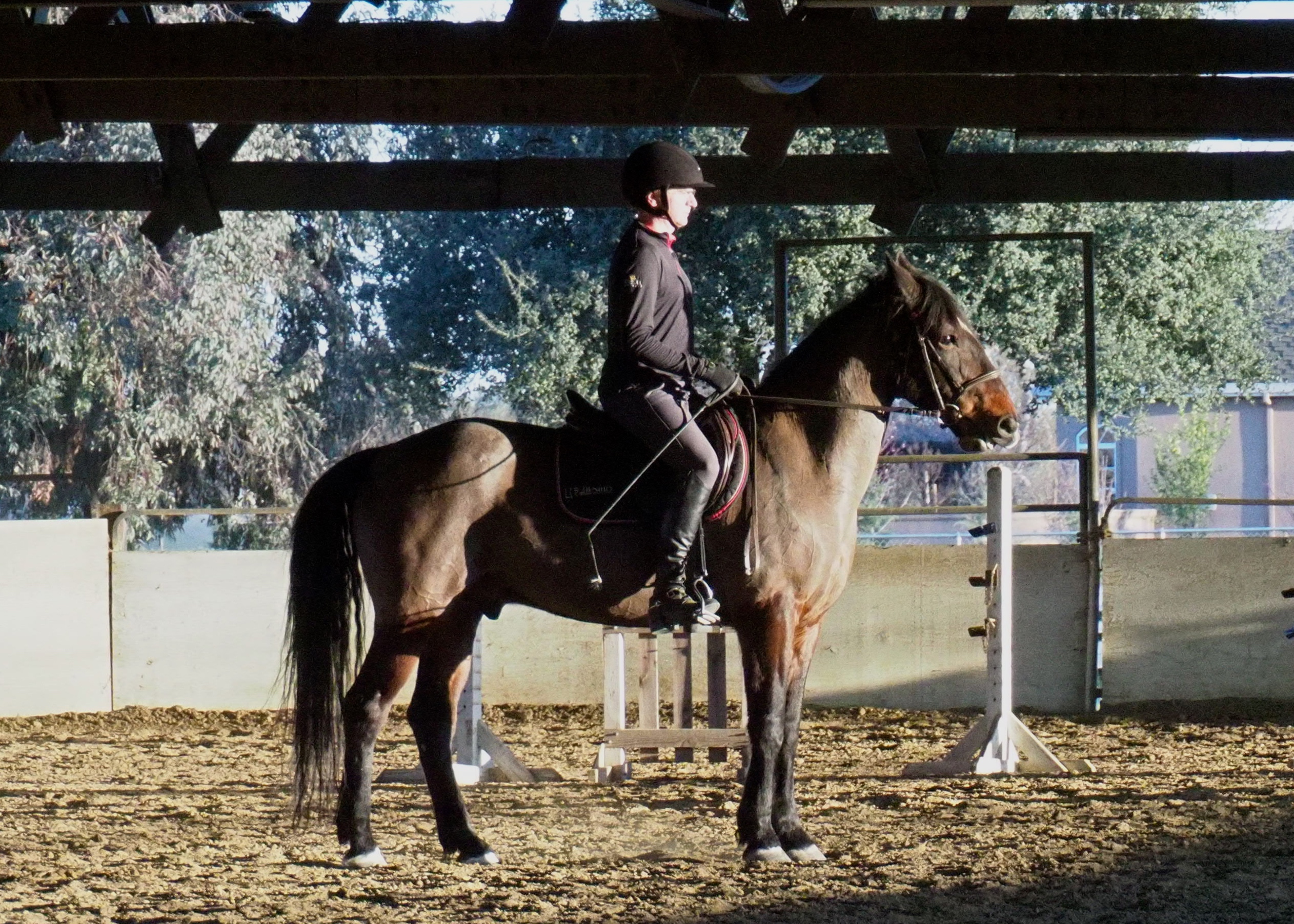 Look how angry Eugene is. He’s like “this is not where we halt; I reject this.” 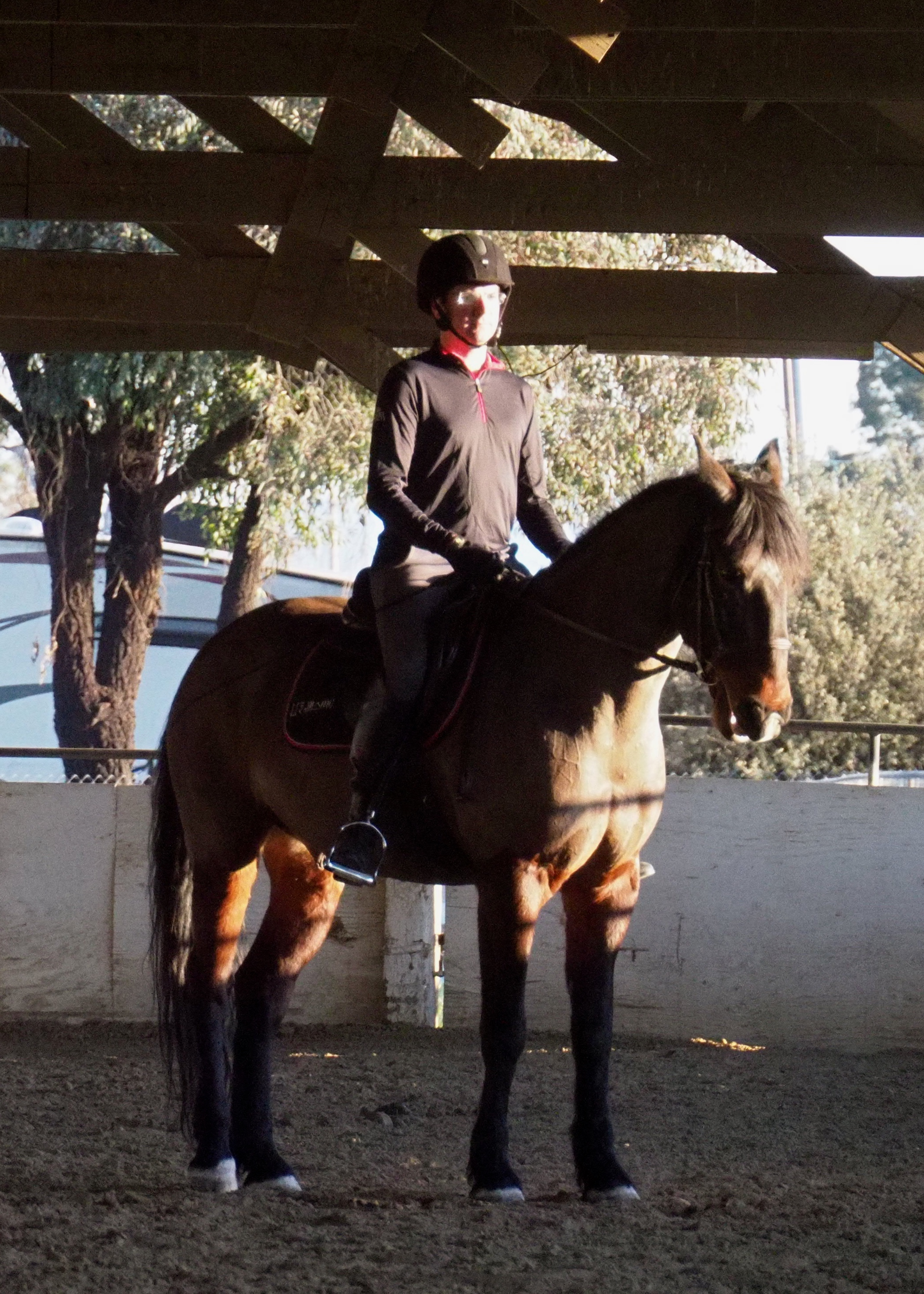 Halting in the corner right before K is completely unacceptable

Finally, the other thing Ashley had my husband work on was holding the outside rein a little further out from the neck to give Eugene a place to move his shoulder to when the inside leg goes on. Basically giving him a space to move into when doing inside leg to outside rein. 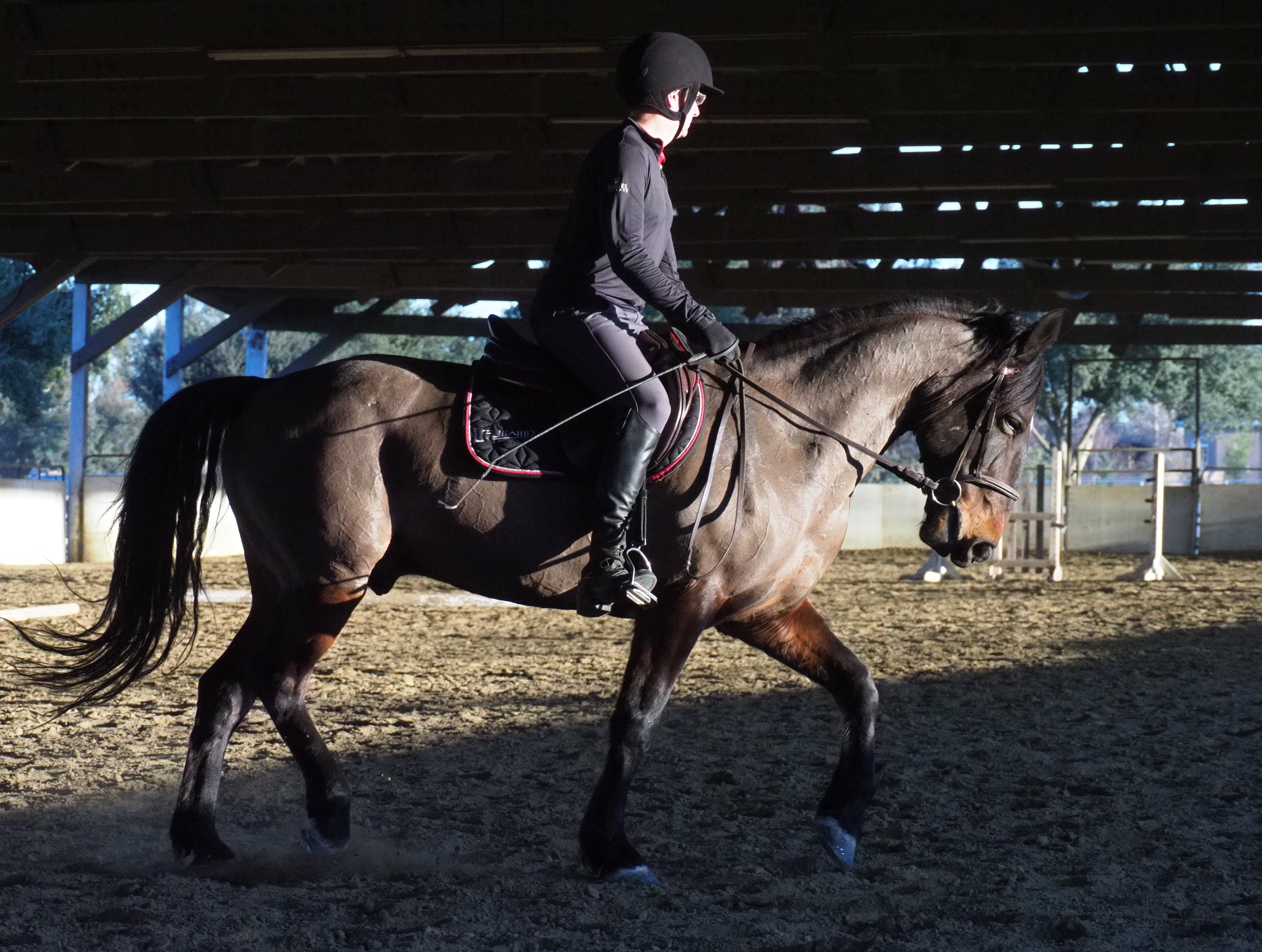 That picture isn’t the best moment in trot, but you can see just how subtle the hand opening is. It’s not a lot. My husband said it helped more at the canter though we can’t find a good picture of that. 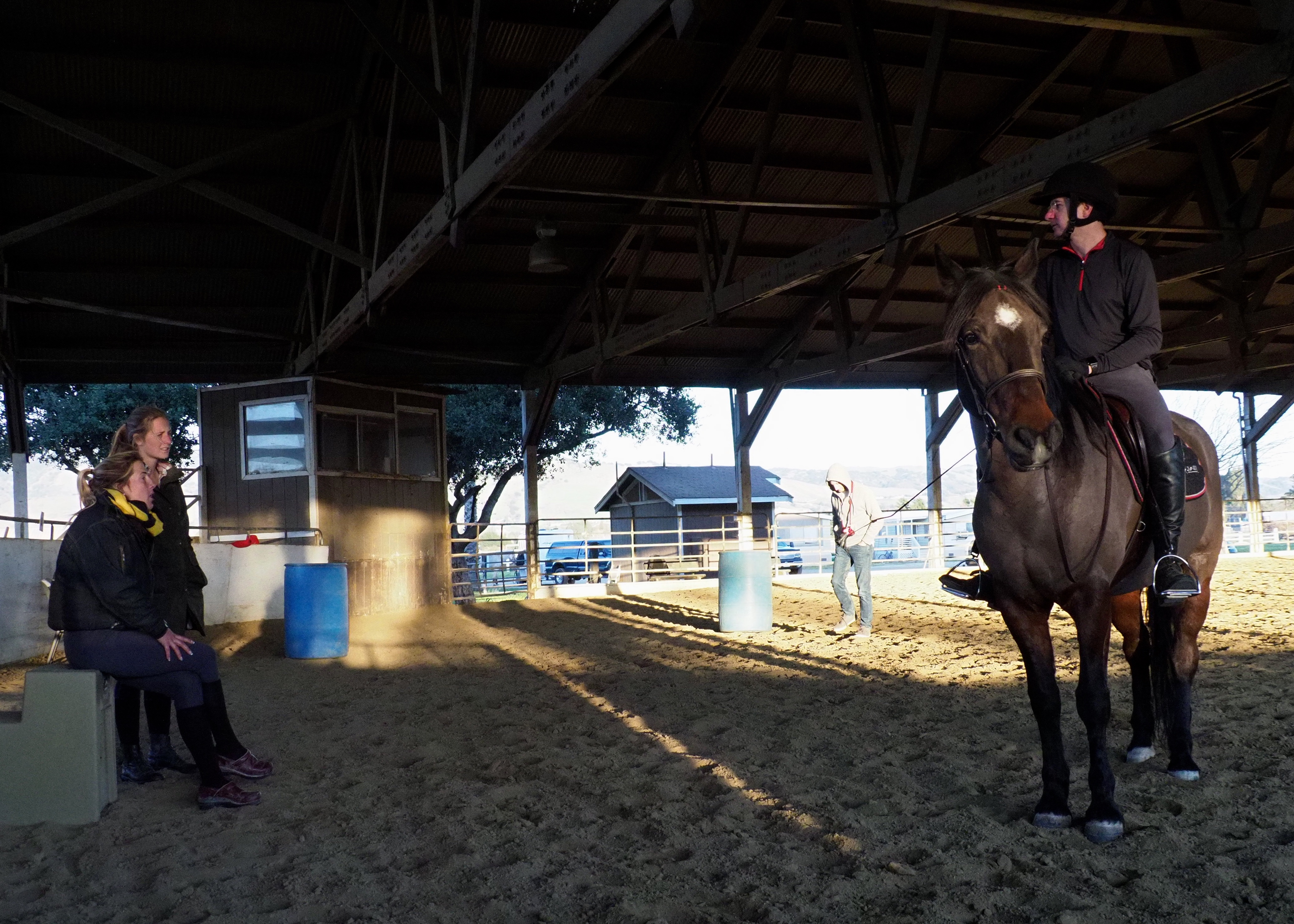 My husband and I have both been wanting to do one of those ride a test clinics where you do your test, have a lesson with the judge, and then do the test again. This was kind of like that. Especially with all the advice for handling the specific movements in the new test, I think it will really help them at their next event – which is only a week later. My husband found his lesson to be really helpful and, like me, really liked Ashley as an instructor.