KEL Equestrian organized an Ashley Adams clinic at her barn this past weekend. Although I initially eagerly signed up, Levi’s recent bit issues and his behavior at the dressage show had me kind of dreading the clinic in the days leading up to it. While I’m certainly not unfamiliar with embarrassing myself in front of professionals, I wasn’t really looking forward to it. I also really didn’t want to be “that” rider at a clinic – the one whose horse is such a pain, the clinician has to take time away from other participants to deal with them. Luckily, The first day was a private dressage lesson.

Ashley started with the usual questions about what we were working on and issues we were having. I told her about our contact issues, the temper tantrums, and how Levi and I don’t really get along. But horses are nothing if not good at making liars of us… And Levi was out to prove me wrong. To be fair, I’ve never said the problem isn’t me. It’s more that my issues and Levi’s issues don’t mesh very well. He wants a rider who pushed him forward. I like a horse that pulls me forward.

We began with walking. 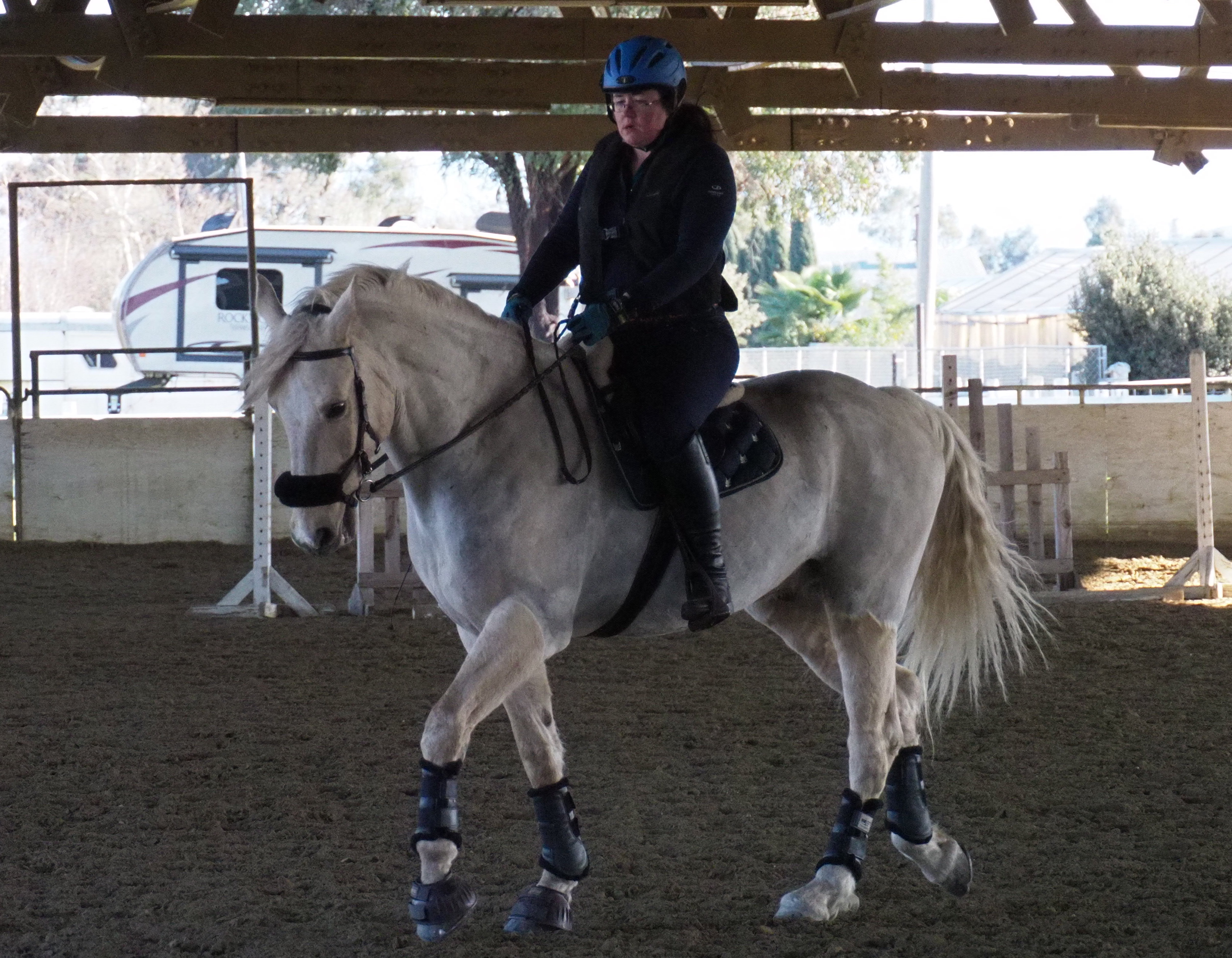 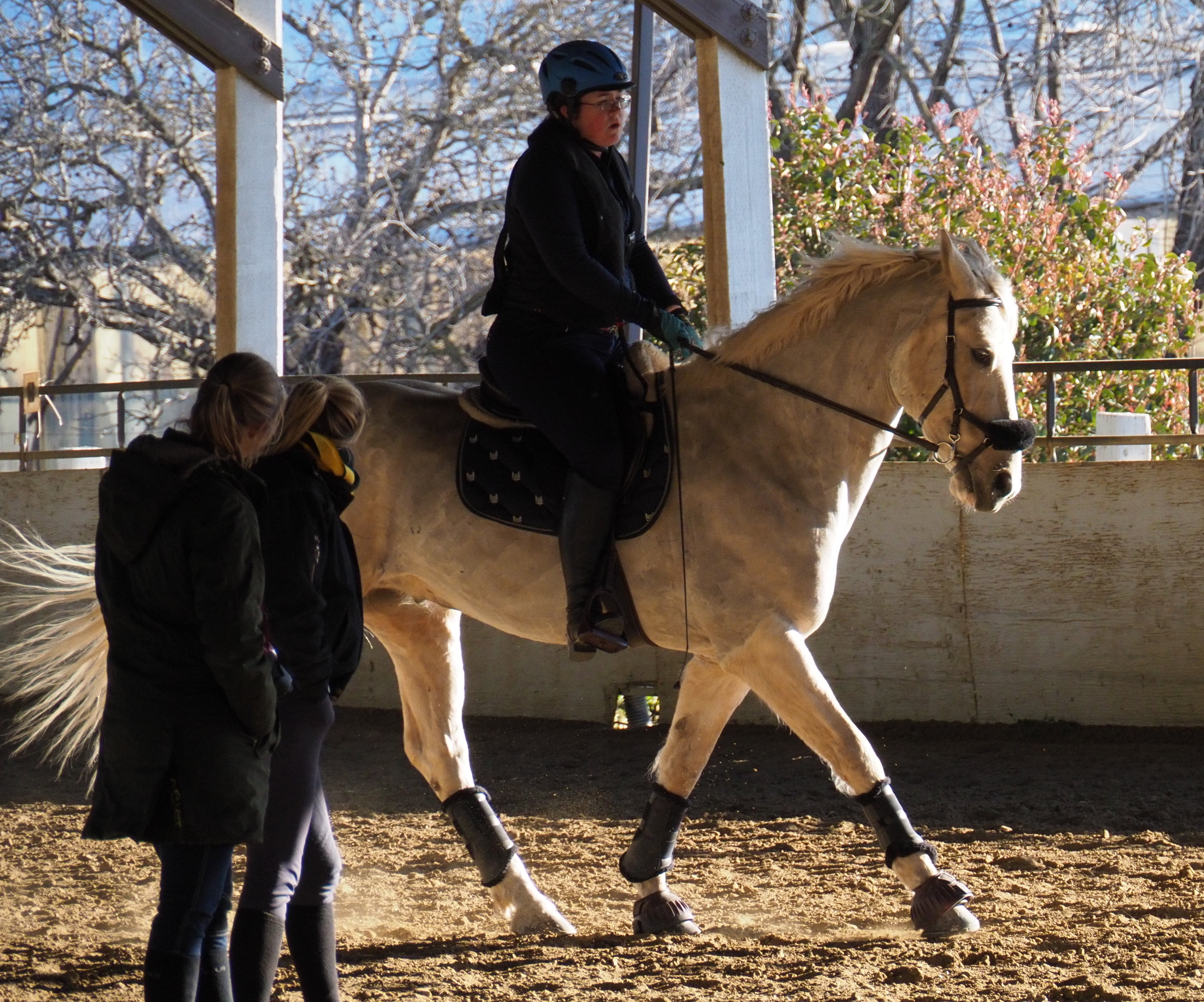 I like this picture for how similar Kate and Ashley are in their simultaneous head tilt as they scrutinize me.

This isn’t a particularly “pretty” picture. However, aside from the simultaneous head tilt, what I like about it is the straight line from my elbow to the bit. As I’ve discussed before, Levi does not like his mouth touched. We usually look like this: 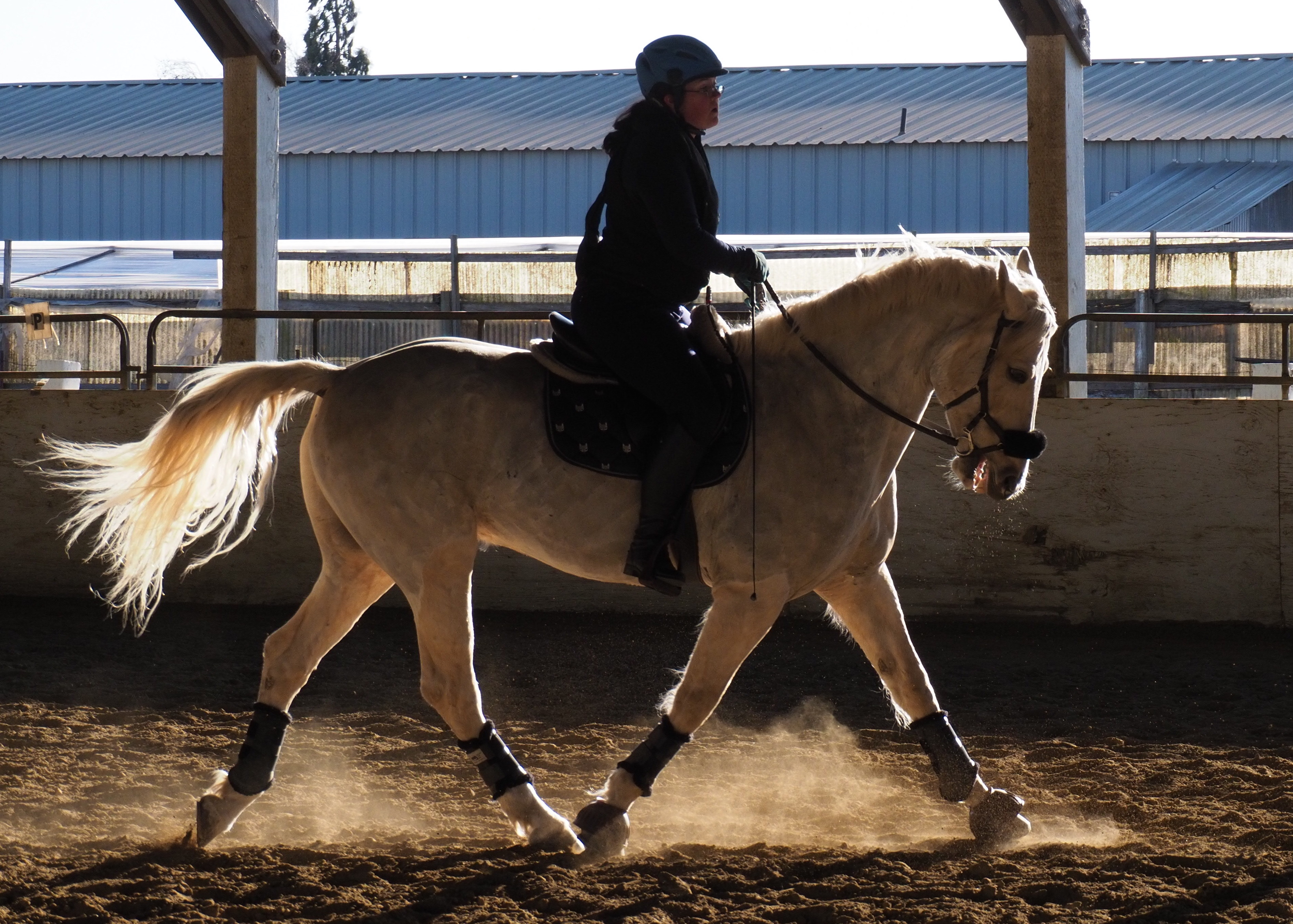 slack reins, ducking behind the vertical to evade contact, and angry, gaping mouth

As we continued working on going straight, doing square turns, lots of changes of direction and transitions, he got more and more forward. We were aided in this by him being a bit “lit” with the new environment. Then we moved on to canter and the focus was again on straightness and transitions. Of course, it wouldn’t be Levi if the initial transition wasn’t excessively uphill: 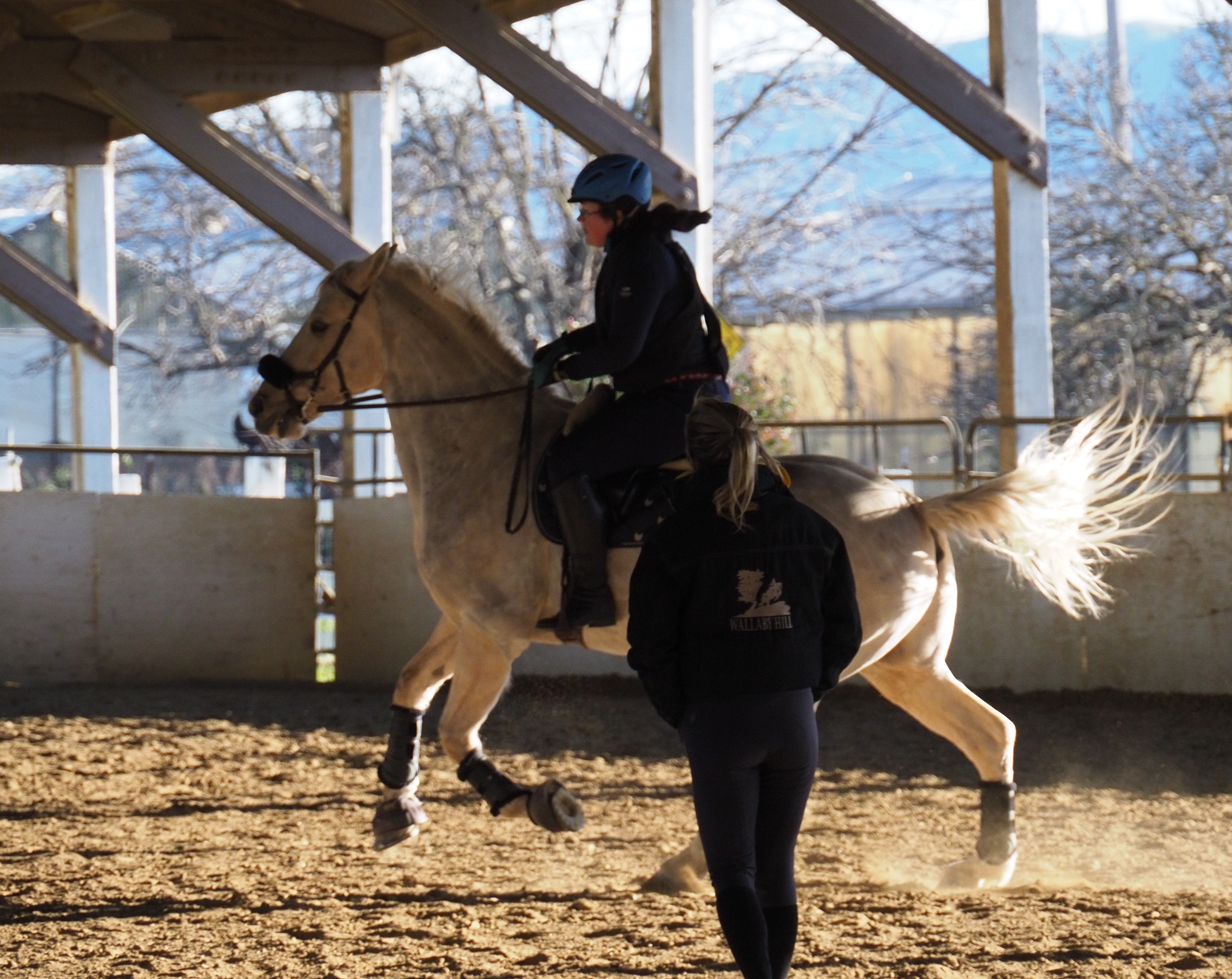 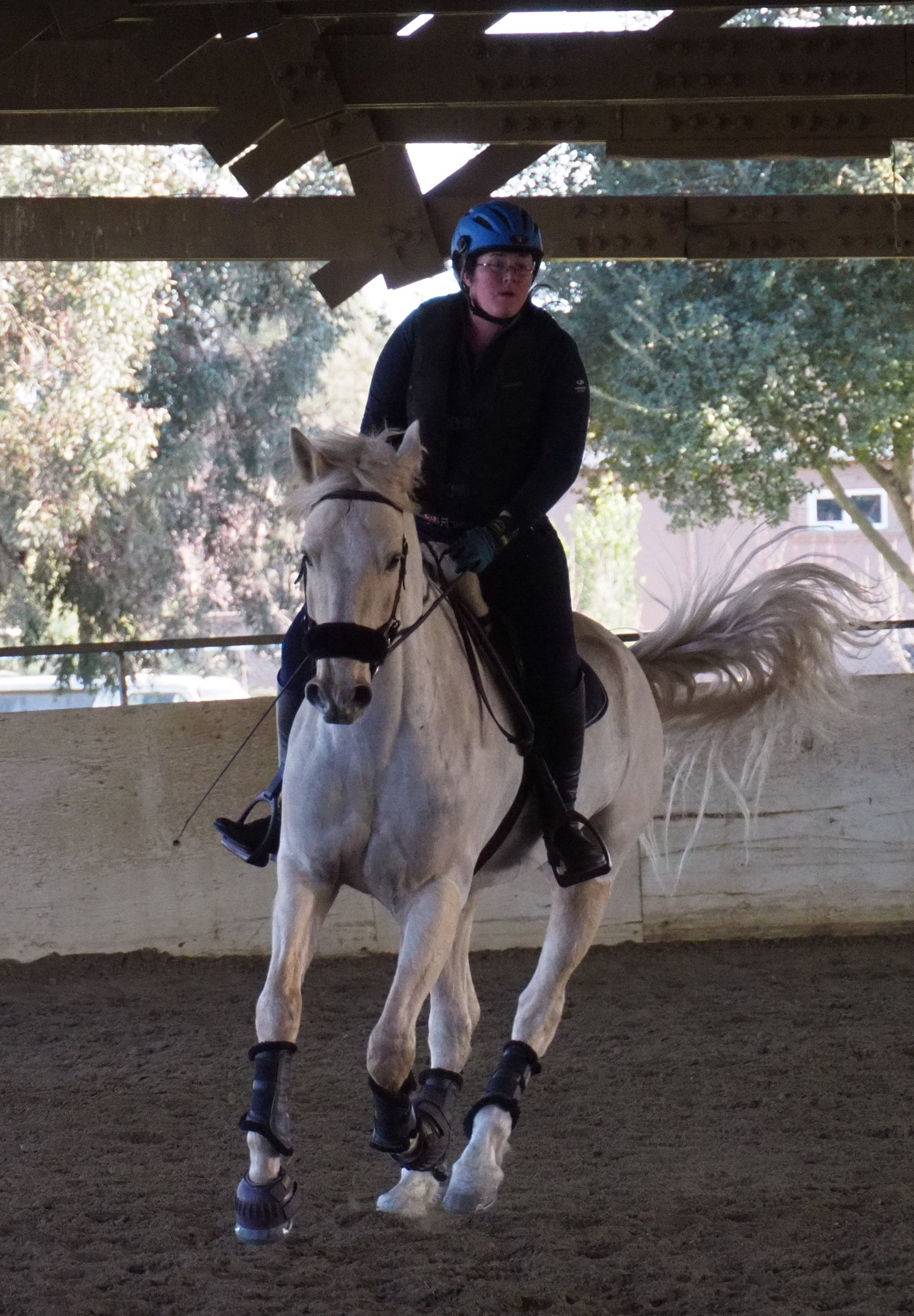 It turns out that if I hurl my self forward and really drive my seat into the cantle of the saddle while shoving my hands forward, Levi will shockingly not pick up the right lead. 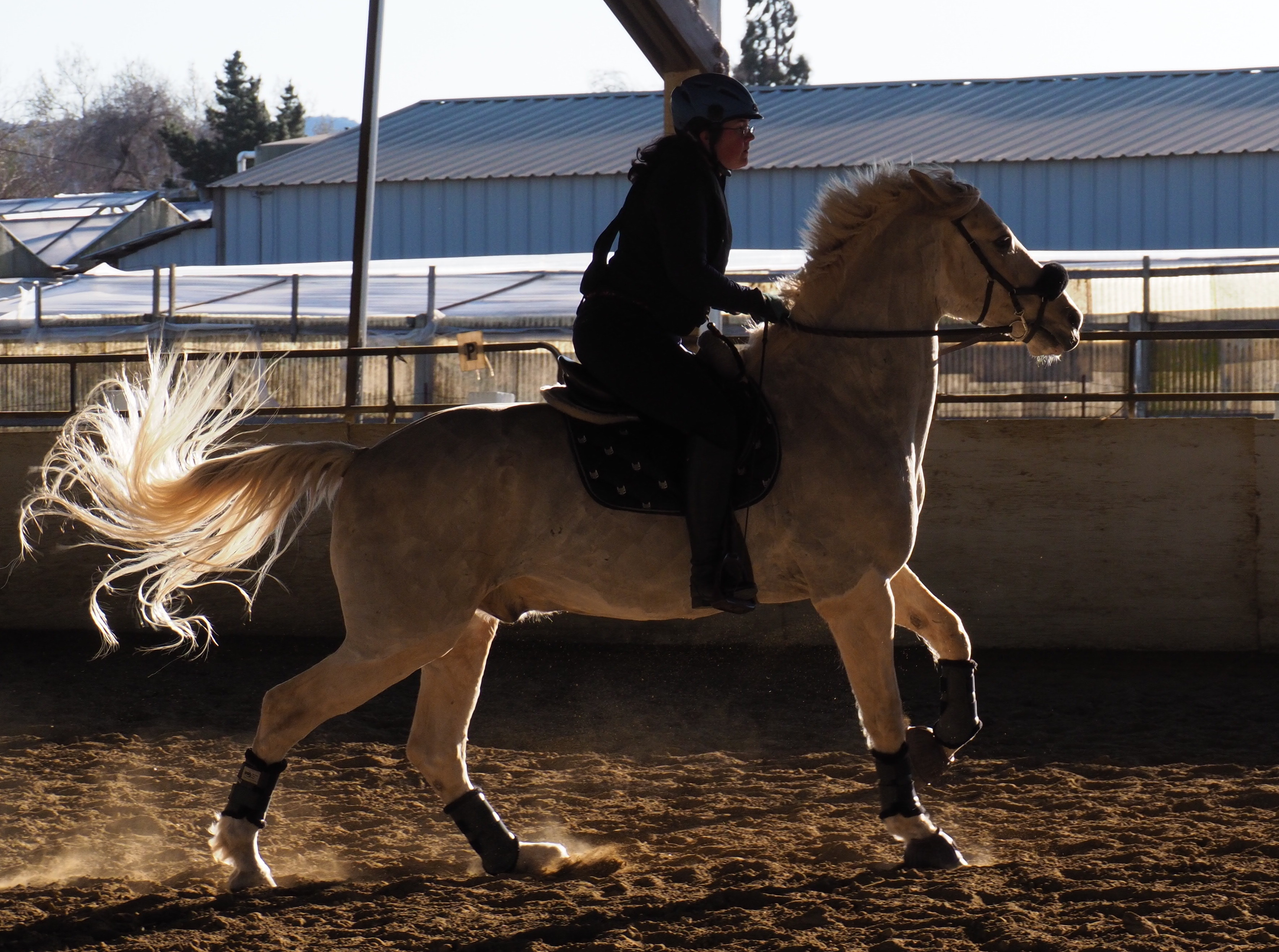 But if I trot across the diagonal with my right leg actually on the horse: 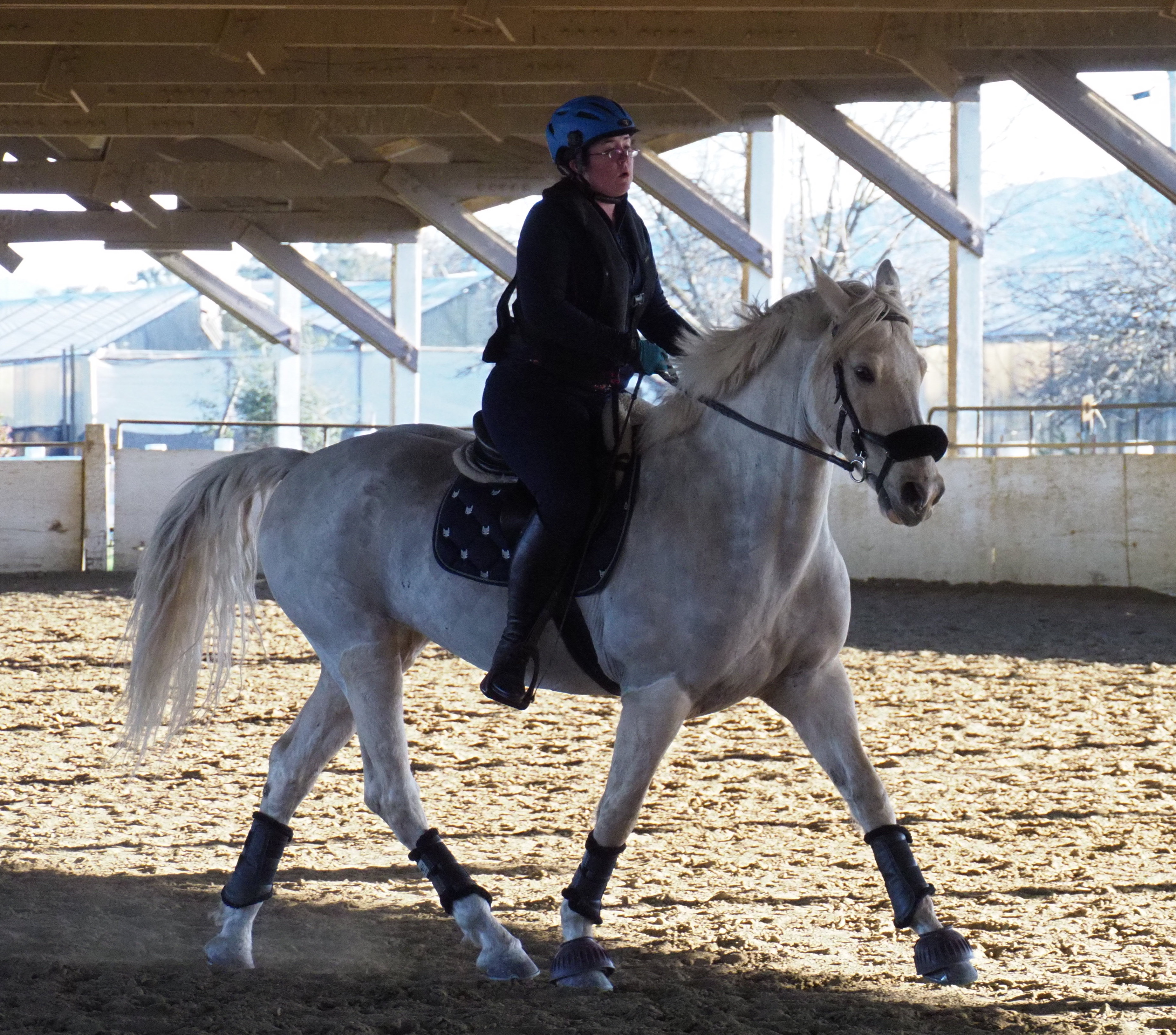 and sit the hell back, he might pick up that right lead. 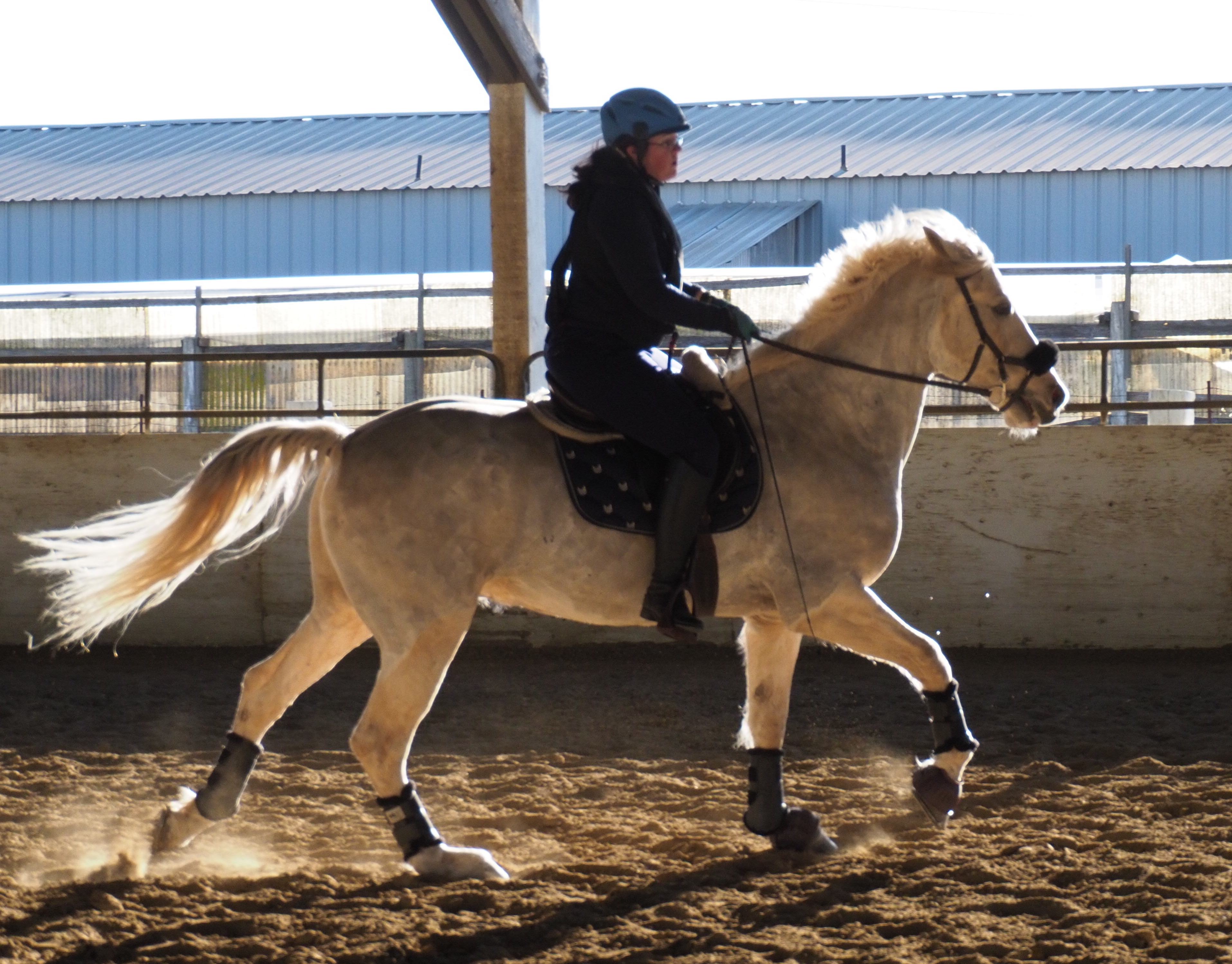 And then get lots of pets (with my outside hand because try as I might, I cannot teach myself to praise with the inside hand so that I’m not giving up the connection every time). 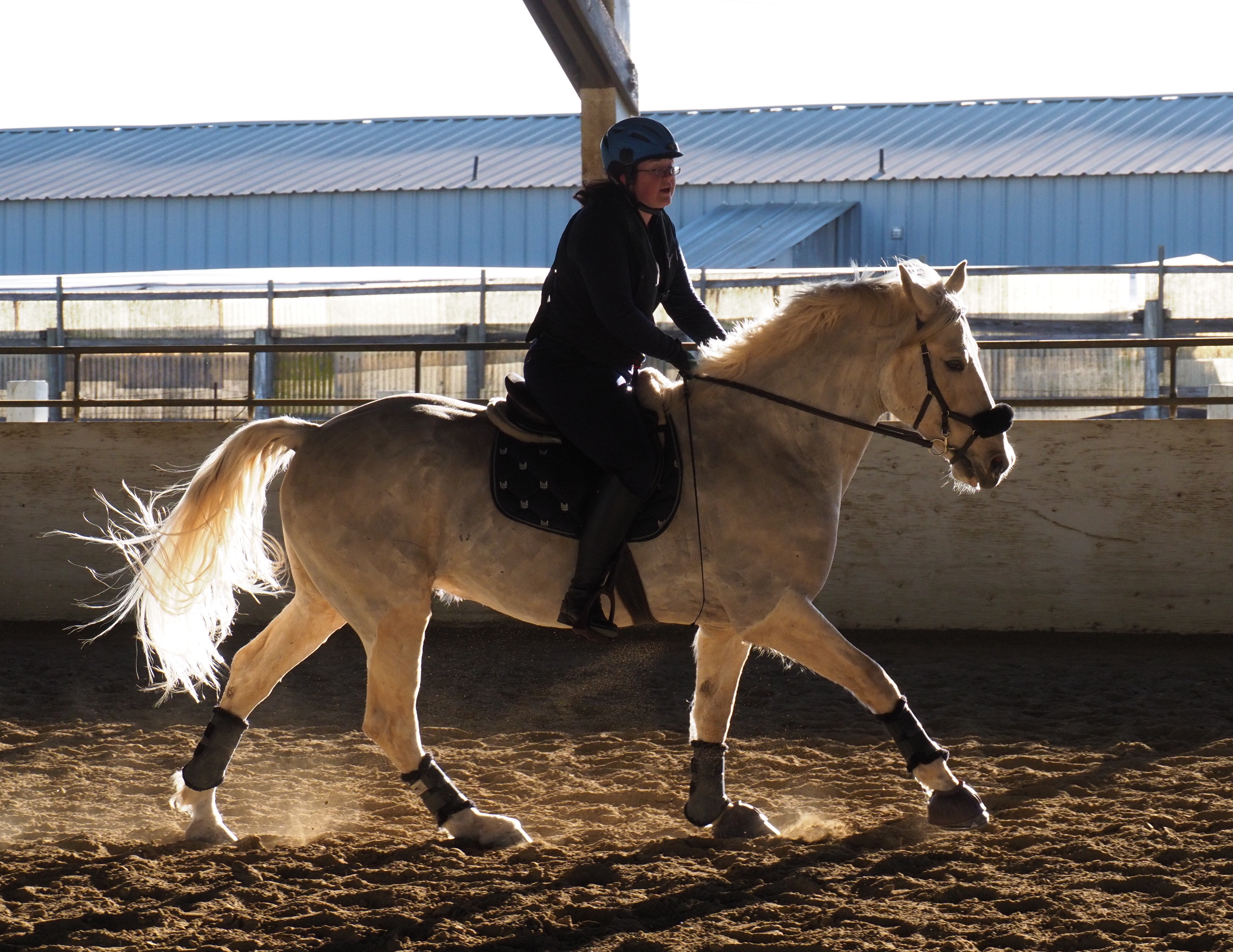 We didn’t spend the whole time on the figure 8 though. Ashley would have us circle, and serpentine and sometimes just go down the long side and push him to open up. 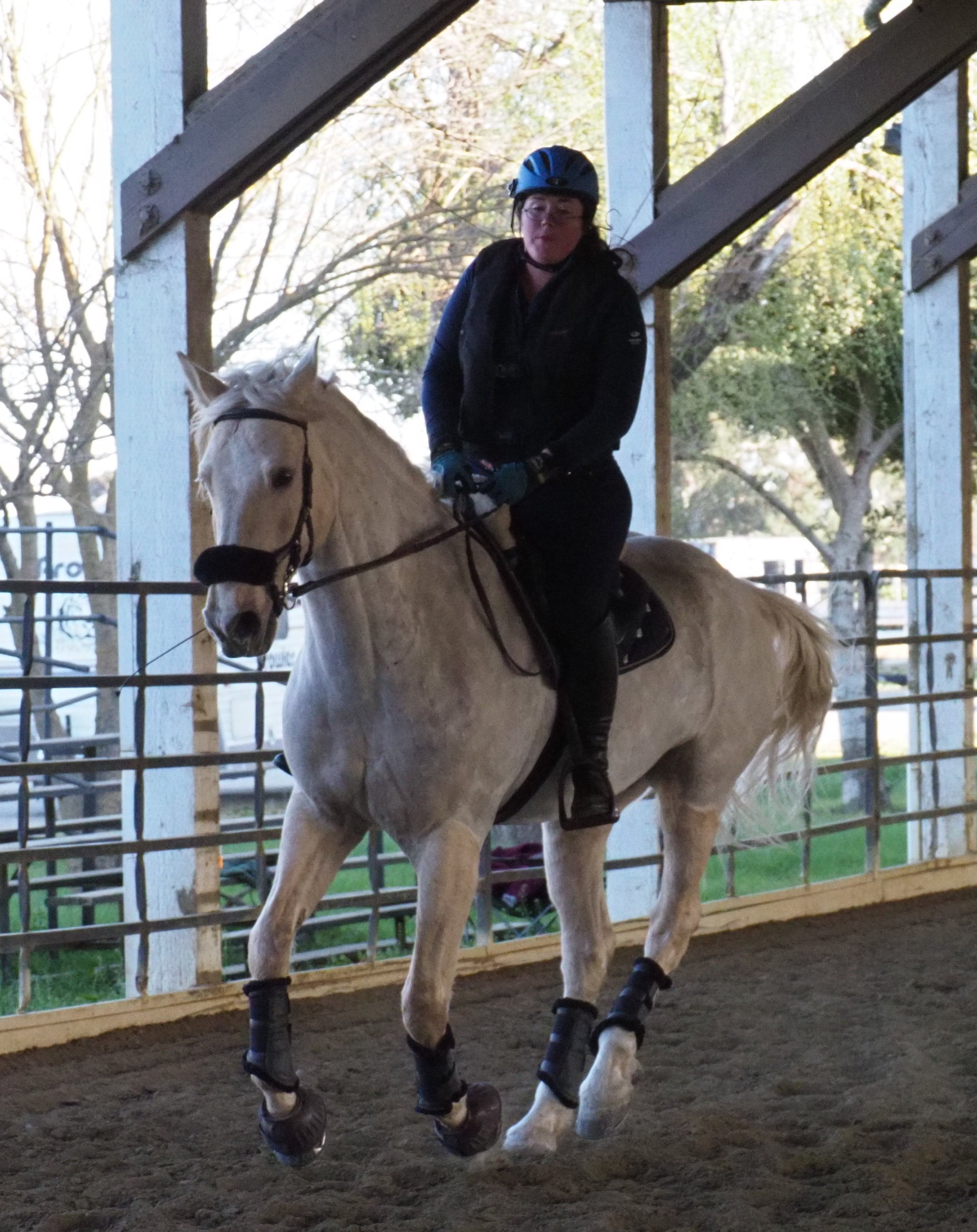 At one point she asked us to leg yield across the diagonal and Levi was like “oh, lateral work? I love lateral work!” 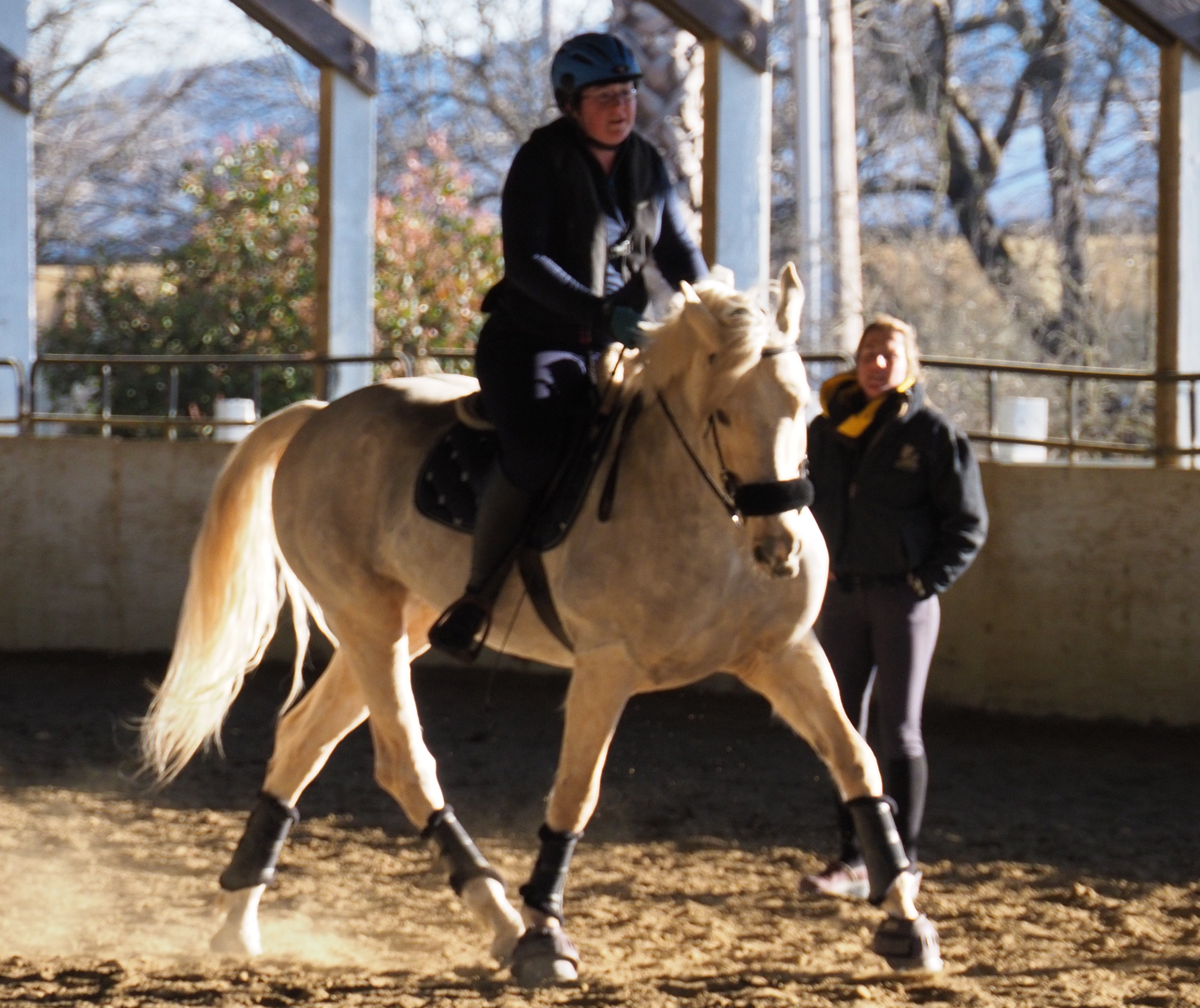 so sad this is out of focus

He’s not very good at leg yield as he likes to trail his hindquarters and overbend, but he really likes it. We only did that the one time and then we went back to the things he struggles with: lots more canter transitions and going forward onto the bit. 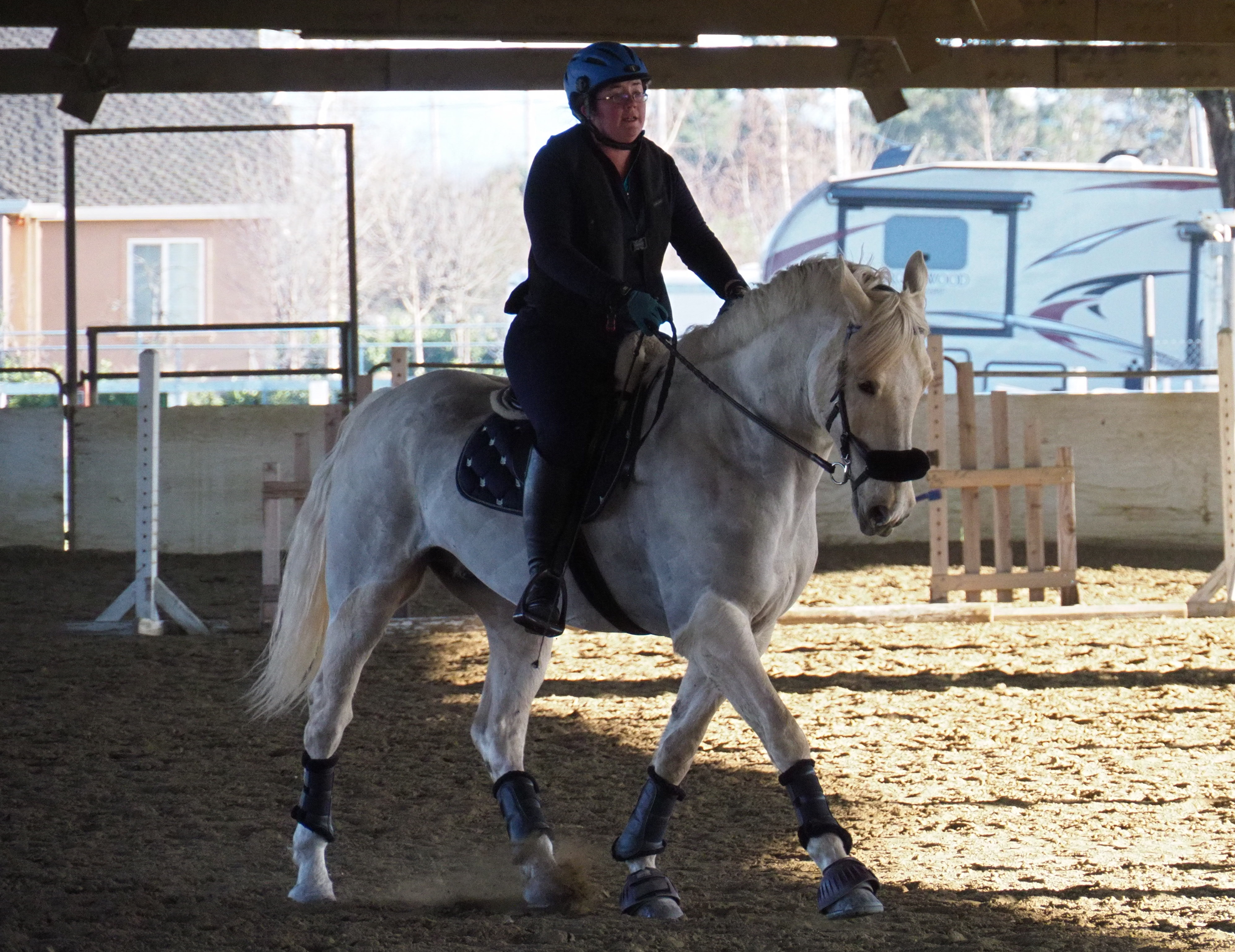 By the end of the lesson, I was exhausted. It was intense, but fun. My husband even managed to capture a picture of my smiling while riding my horse. Honestly, I’m not actually that miserable, but I have a general resting b*tch face and when I am riding – especially during a lesson – I am usually concentrating way too hard to think about smiling. But Levi was being SO good and I spent a lot of time patting him and telling him “good boy” that I apparently was smiling.

At the end, Ashley basically told me off for complaining about him. While I’d obviously rather have him be good and have a nice ride than have him be a jerk just to prove my point, it is frustrating when your horse makes you look like a liar. I wanted to be like “I’ve got judge’s comments that agree with me,” but obviously I didn’t. Because Ashley is old school and scary and does not like back-talk.