At breakfast, one of the kitchen staff said we were to meet Mel at 10:30 for riding instead of 9:15 like usual. We hung out in the lodge by the fire reading and it was a nice morning. Mel came around 10:15 to say she was ready so we headed out to the stable area. It was nice to ride in an English saddle again. Although Gannet is so big and wide, it still was a very wide saddle, but it was more comfortable than the western saddles. 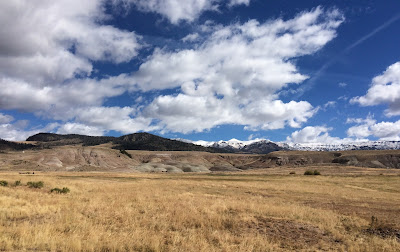 My husband was on a new horse, Alicante, for jumping. This horse had been a bit ruined for jumping by having a nervous rider pull him up in front of jumps and basically teach him to run out. After she did that, Mel told her she wasn’t allowed to jump anymore. The woman apparently complained to everyone about it – even the taxi driver who came to pick her up at the end. So my husband was given a crop and told to ride defensively.

The style of riding for jumping is just as weird as the rest of the riding style at Bitterroot. No contact is allowed, you must stay in two-point the entire time, and you must have your hands holding mane the entire time. You cannot rate the horses, you just have to let them jump from whatever spot they pick.

Mel said she’s had professional riders fall off doing this tiny cross country course because they insist on rating their horses and sitting down and the horses buck them off or just slam on the breaks and pitch them over the jump. It’s not the usual sane style of riding cross country, but it works if you just give up your training and go with the flow. As weird as it all sounds, it was actually kind of nice in the end. You don’t have to think or worry about strides or getting the right spot, you just get to go along for the ride.

I was seriously questioning doing the jumping at all with the way Gannet had been acting, but I figured I’d give it a try and just stop if he was terrible. While he continued to pull his head down to the ground and shake his head around, he did like jumping and he just ran up to and over anything I pointed him at. Sometimes he chose really awful takeoff points like practically under the jump or a full stride away, but he always went over.

We did have quite the issue with eating whenever we were not jumping. This horse normally has a muzzle on but doesn’t for jumping. He’s huge with a giant thick draft neck and he has a simple snaffle on. When he want to throw his head down and eat, there was basically nothing I could do about it. If he were my horse, he’d have a serious training session with a crop. But he didn’t do it while jumping, just when walking along.

Allicante did have a few run outs, but my husband was able to circle and represent him and get him over everything eventually. Mel even complimented him: gasp!. We rode all over the cross country field putting together little lines of 2-3 jumps, usually not in actual lines, but circles. Lots of walking in between. There was also a cool section in between two close bentonite hills with three jumps that we ran through.

We also did a little section of tiny 1 foot jumps that she keeps for kids and less experienced riders. They were actually really fun because we just cantered all along that section of trail and soared over the little jumps. We finished up the ride by galloping up a bentontine hill and then across a plateau before returning to the ranch to soak the horses’ legs and hop off for lunch. It was a shorter ride, but a lot of fun. 4.8 miles 1:17

Because it was so cold in the morning I had my jacket on over top my long-sleeve thermal shirt and sauna of a cross country vest. Because it was sunny out and we were doing so much actual work, I got really hot and regretted the jacket immensely. When we go back to the cabin, I stripped everything off and had to hang it over the heater on the wall because everything was soaked through in sweat.