We walked the cross country course after dressage. It was a very nice little Intro course. Most of the jumps were tiny and there was a decent variety. I imagine it’s a little hard to offer a lot of variety at Intro. 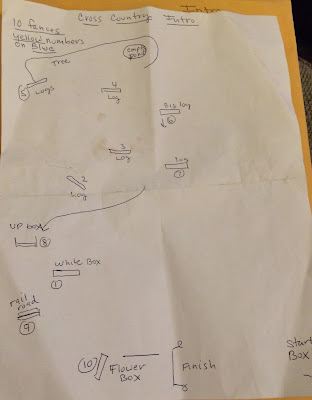 #5 was interesting because it looked tiny on approach, but there was actually a second log behind it. It was still small, but you didn’t see the width until you got up to it.

#6 was nice and wide, but another one with a hidden depth. 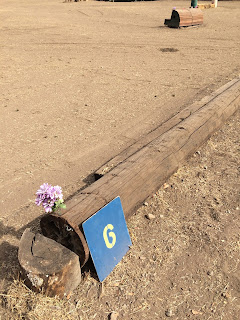 We met some deer while doing our course walk.

#8 was called “up box” on the drawing. You had to ride down and then up a little gulley and then over the box. The terrain wasn’t an issue, but the paint job actually makes it look like a gate or something airy from a distance because the black looks like it’s just shadowed ground.

#10 was interesting because it was about 2x the height of all the other jumps. It’s not that it’s a huge jump by any means, but it was significantly larger than all the rest. 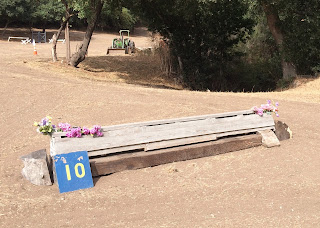 The cones were the finish line. Thankfully they moved that tractor back so you weren’t trying to run straight towards it. I don’t know if Nilla would have cared, but she might have and I know many horses that would. 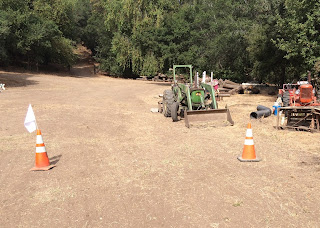 Unfortunately, my husband got zero good pictures of us jumping the course due to technical difficulties. Luckily, I have helmet cam footage of it. A few points before we get to the video. The judges came up and said I was going first and then walked far away to a hill where they could oversee all of the jumps. And then one of them starting yelling “10, 9, 8…” and I was like, do I go at 0? I guess. I don’t know what I’m doing. No one gave me any instructions.

We made it nicely over 1 and 2 and then came up to where I thought 3 was, but the sign had fallen down and it now said 10. Had the sign just fallen down and been blank on the other side, I might have still gone for it as I was pretty sure it was #3, but the fact that the other side of the #3 sign said #10 made me doubt myself. You can’t hear it in the video, but the judge was yelling at a volunteer to go fix the sign. I yelled back that it said #10. I couldn’t hear what they yelled back, but figured it must be #3 if they were coming to fix it so I just went over it and carried on. I did not get any penalties for this. Does anyone who does actual eventing know if I would have gotten penalties for this at a non-schooling event?

4-6 were all good and then at #7, there was some sort of noise over in the bushes to the right. You can see her ears go over that way. Then I had to make her go over there for #8. She was pretty distracted, but we made it over #8 and onto #9 and #10. She actually wanted to canter #10, but I asked her back to trot because her attention wasn’t on me or the jump. After #10, I asked her to keep cantering towards the finish and she really pitched a fit. You can see her head go down and away. But we made it across the line without falling off!

We stuck around to watch the other Intro, BN, and Novice riders go. One of the girls doing intro had a few refusals. The other woman doing Intro said the pony was 22 and had been doing this forever. After she rode, the coach came up to ask what happened and the girl said she circled her to get her to slow down. And the coach was like, “well, you weren’t actually going fast…” I wasn’t sure if she was the one in the lead or if it wasn’t the other woman who also went clear so I didn’t know if I had 1st or 2nd.

After everyone had gone, we went down and stood around waiting for the judges to tally everything up and pass out the ribbons. And we got 1st! And some carrots. Can you guess which of those Nilla was more interested in? 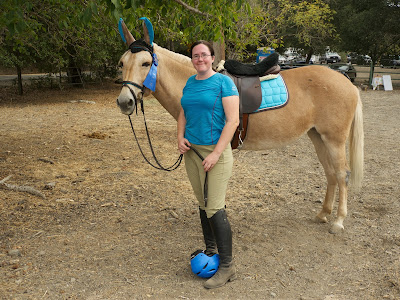 I was really happy to win (though it’s sort of sad that I only won because someone else messed up, but I’ve heard that complaint a lot from eventers). Despite some antics, Nilla was really good. There aren’t a lot of horses you can give nearly a full month off to and then go win a show. 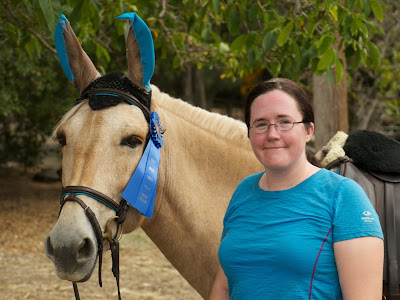 I was already wanting to move up to BN for our next show so it was really nice to win Intro. Especially on a green mule that I’ve (mostly) trained myself. Now I know we’re ready for bigger and better things.