We had a two hour break after dressage before show jumping. We took some of that time to go walk the cross country course. Then we just hung out by the trailer trying to stay in the shade and watching the other dressage riders go. It was pretty freaking hot outside so I stuck with no jacket.

12:45 was the start time for intro jumping so I didn’t get on until 12:20 or so. I really did not want or need a lot of time to warm-up. We went into the warm-up ring and I asked her to trot and she started leaping. Just sort of hopping the front end up, leaping forward and throwing her head down and around. No bucking, just exuberance. Sort of like riding Gannet all over again.

I got after her and got her to trot around without leaping or cantering. Then I pointed her at the little cross-rail in the warm up and she sprung over it with quite a lot of leaping and head slinging afterwards.

We repeated the little cross rail a few times. 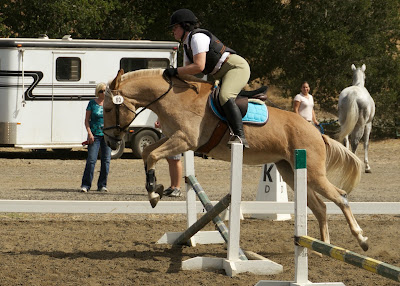 If you look carefully at this picture, you’ll see the spectators behind me watching me. Because her behavior was catching attention. She’s also massively over jumping this little jump which could be trotted over.

We came around and did the vertical and she really went off “celebrating” afterwards. Unfortunately, my husband stopped the picture stream, but you can see it getting started here.

Let’s zoom in on the naughty face: 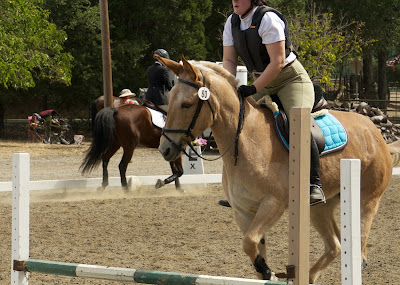 I know it doesn’t look that bad, but that little head tilt is trouble. She is thinking and really when is thinking ever something you want your horse mule doing?

Nilla’s version of naught is still very manageable. It’s just excitement and playfulness, not broncing or anything dangerous. So I considered us good and want to stand in the shade talking to the girl I met at the last RDLA show. She was just doing the combined test and not the full 3 stage horse trial for this show. My husband kept saying I should do more jumps to get Nilla calmed down, but this isn’t hunters, we just have to not knock poles down, we don’t need to look pretty doing it. I’m glad I stopped because Nilla got bored of the jumps pretty quickly during our actual course.

We went from over jumping with a bit of leaping around afterwards:

To “meh, maybe I’ll just barely pick my feet up over this”:

I was actually getting worried about her knocking a rail because she wasn’t really trying. I ended up actually having to squeeze her a bit over the jumps. A lot of the pictures ended up blurry though my husband did figure out why after we got home (wrong setting). But I included them here as examples of form. We did get a few decent shots. 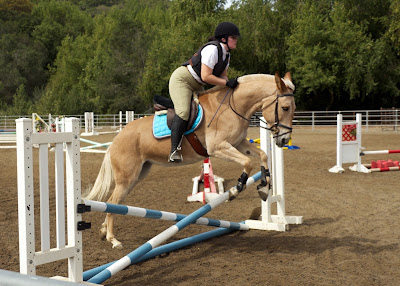 We ended up going clear for show jumping. but so did the other two entrants so Nilla and I were still in 2nd place going into Cross Country. I was happy to end the round still on the crazy mule and without any rails.