Sunday was the RDLA Horse Trial. I signed up for the Intro division though I was tempted to do BN. I figured we could handle the dressage canter, but the bigger jumps were worrisome since I knew I wouldn’t have time to practice much before the show due to my vacation. I had actually sent my entry in the morning before the lesson where I discovered Nilla was off. I feel like every time I make a horse plan, I get jinxed.

As I mentioned previously, Nilla spent almost the entire month unridden and then we went to the show. Given all her time spent cooped up and her freshly injected hocks, she was in fine form. When I got on in the warm-up arena, a trainer was working with two of her students. We rode around for about 1 minute before the trainer commented that she looked “fresh.” As Nilla was currently barging around trying to drag the reins out of my hands and canter off, fresh was putting it mildly. I told her how we hadn’t ridden since the 2nd and she gave me a commiserating look.

I talked to a bunch of people at the show – everyone wants to meet the mule – and they all seemed shocked that I showed up to a show after having not ridden all month. It’s almost like that’s not what you normally do. Like maybe it’s not the best idea. Who knew?

I got after her as much as I could in warm-up, but honestly, I probably would have needed a few hours to get her worn-out. I ran through the test a few times trying to improve on some of the comments from the last time we did Intro B. One of the comments was to get her moving more forward at the free walk. I tried this once in warm-up. I asked subtly with my seat just a tiny bit and she leapt into a canter. So I said screw that. I needed her to stay calm more than I needed to get a good free walk. I did grab some treats and do some trot to halt transitions and they were pretty good. But her general manner was more akin to a freight train than a dressage mule.

The show was really under-populated this time. Last time they had to divide BN into two sections. This time there were two people in BN. There were only three including me in Intro. Apparently there was some big show in Fresno a lot of people went to. While this sucks for the ride managers, at least dressage was running on time. I skipped my jacket and kept my vest on in consideration of Nilla’s behavior.

The test went okay. Better than I was thinking it would. We got a 6 and a 6.5 on our halts. We also got “energetic” for the 2nd movement, which was when she just barged off and I honestly thought she might just trot right out of the ring. Energetic is my new favorite euphemism.

I did shorten my reins after this. You would think I would have started with them shorter, but I was playing a delicate balancing game between not letting her run off and also not totally pissing her off and making her explode. I actually told my husband this afterwards and he said he could hear the judge from where he was standing and she was saying things like “this rider is doing a great job of staying out of her way” “see how she brings her back” and other comments regarding me dealing well with the pissiness.

We did have some nice moments. Like an 8 on our first circle. I would say we actually deserved that. 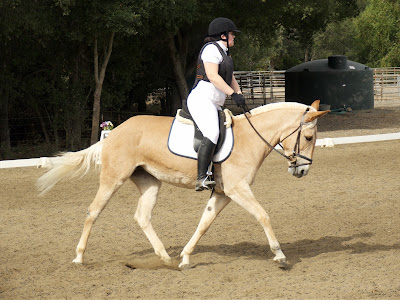 Unfortunately, we had some bad moments as well. Especially in the walk. Comments such as “unsteady in bridle” and for free walk the hilarious “poll should be lower than withers to show stretch.” This judge is amazing at wording her criticism. I don’t have this level of tact. My comment would have been something along the lines of “horse should not resemble giraffe.” Nilla actually saw either my husband or something past him and picked her head up and pricked her ears to look at it as we went across. I didn’t dare touch her so there wasn’t anything I could do about it. 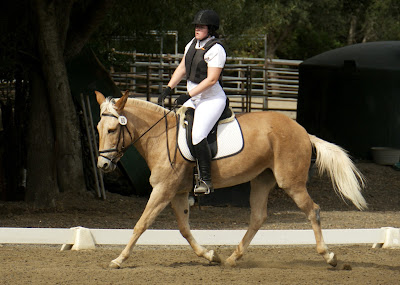 As we went to do our final circle at B, I asked her to turn and she chose to canter.

I wasn’t quite so zen about it as this guy, but I did manage not to actually speak any of the curses coursing through my head. I got her back to trot where she then produced this glorious circle: 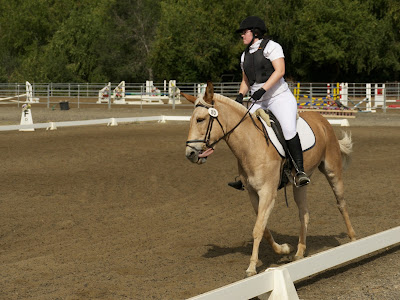 For this, I got a 5 and the comment of “unfortunate canter, corrected.” Unfortunate indeed.

I also got a closing comment of “energetic mover.” We ended with a 67% for a 33. The other two scores in our division were 32.5 and 39. We would have been in first if not for the canter break.