The morning was looking a bit overcast so I put my rain jacket on. I was assigned Gannet and my husband was on Ranger. Gannet was a huge red roan draft mix who was described to me as being “a bit of a handful.” He rides English style with a snaffle and has to have a muzzle put on because he eats all the time. And as a giant draft horse with a huge, strong neck and no leverage bit, he can yank his head down if he wants to. The reason he’s a handful isn’t because of the eating, but his canter behavior. He likes to root his head down and throw it around. He doesn’t actually buck, but it’s pretty concerning behavior.

I was told by Mel that if I want to do any jumping latter this week Gannet is the only horse big enough for me to ride that jumps. The rest of her jumpers are little arabs. Of course, I ride a 15h mule at home, but Mel was pretty convinced I was too big for her smaller horses and there is no arguing with Mel. I got a second warning from Robyn before we went to canter and I was getting pretty concerned, but Gannet was fine. I don’t appreciate that sort of behavior, but he wasn’t actually bucking or trying to run away with me, just being pissy going into the canter. Once he gets going, he does settle.
The really difficult part of dealing with this behavior is actually that he has almost no mane down by the saddle (you can see this in the picture above). So you have to reach half way up his neck to grab mane. And you’re required to hold mane and be in two-point for all cantering. Even if you are a good enough rider to not hold mane, you’ll get yelled at. When Gannet then yanks his head down to go into the canter and I’m in two-point and holding onto his mane half way down his neck, I basically go tipping forward. These are endurance/western saddles too so you can’t sit in a real two-point with your butt back because you can’t move your legs forward, so you’re really just standing upwards.

In the video, you can see his head just drop out of frame and a bit of shaking about. I actually felt like I was really getting yanked down, but I guess all my years of training about eyes up paid off because it doesn’t look that bad. (Except for being crooked – it took me the full week to get the camera level.) 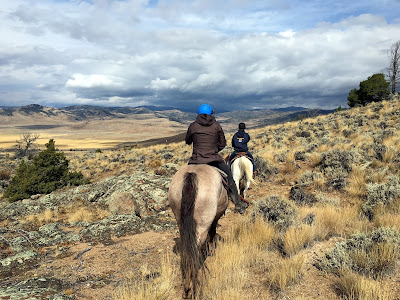 We rode up from the ranch into the hills. We had a few canter and trot stretches. It wasn’t raining at this point and I was getting really hot in my coat so I had Robyn help me get it off. We were warned that the horses are terrified of jackets and no one is allowed to take them off while riding. You have to stop and have a wrangler get off and hold your horse. I don’t know why they don’t just condition the horses to it. 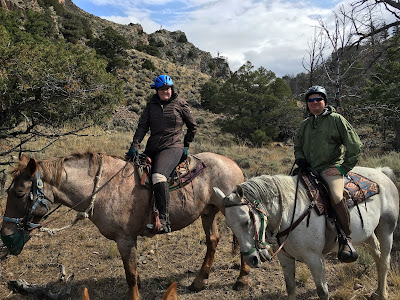 Then we started going down a canyon called Buffalo Draw. Bayard, one of the owners, had buffalo years ago and they used to barge through their fencing and liked to escape to this canyon. Buffalo can’t really be herded by horses so Bayard used to herd them on horseback with a bb gun and shoot them to get them to move. Buffalo hide is so tough, it wasn’t breaking skin or anything, but it got them moving. This worked for a while, but one day a buffalo got pissed at being shot at and charged him. It chased him at a full gallop all the way back to the ranch where Bayard announced they were having buffalo for dinner. They butchered and sold off all the buffalo after that.

Going down the canyon, it started to rain and the wind coming up the canyon was making it pretty miserable so we had to stop again so that I and another girl could put our rain jackets back on. When we came out of the canyon, the sun started to come out again and there was a gorgeous view out over the valley. 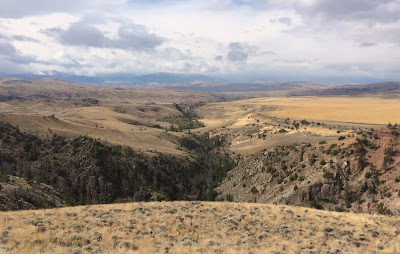 We rode down and then back up a steep section and came out near the horse pastures to find a bunch of cattle. A few of the cattle had gotten through the fence and the rest were standing all around the gate so we got to do a bit more cattle work. Robyn and I went to fetch the three that had gotten into the horse pasture and push them back out. The rest of the group gathered up the other cows. Once we combined them, we pushed them away from the gate a bit and left them. Apparently these cows are the team sorting cows, so they don’t go up into the forest, but they aren’t supposed to be in the horses’ pasture. 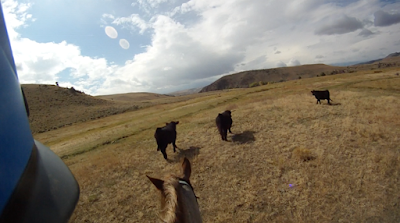 We rode down to the ranch from there to soak the horses in the river again and then put them away. The gps puts the ride at only about 5.5 miles. A sort ride distance wise, but we did a lot of walking. Took a little less than 3 hours.

Lunch is at 12:30 and we got back just at 12:15. However, the next ride isn’t until 2:45 so we had a bit of downtime after lunch. As we were sitting in our cabin relaxing, it started raining and the wind was really intense. We could hear it gushing around the cabin and through the trees. One of the wranglers was sent out to ask everyone if they wanted to ride that afternoon or not. I said I’d like to do a short ride if that would be possible. I don’t mind riding in the rain, but I didn’t really want to spend three hours soaking wet with the wind beating me.

A bunch of the other guests elected not to ride. I think about 9 out of 19 people showed up to ride for the afternoon. The rest decided to stay in the lodge by the fire reading and relaxing. I don’t blame them. Was tempted myself. Fortunately, it stopped raining and the sun even came out and we had a good ride. 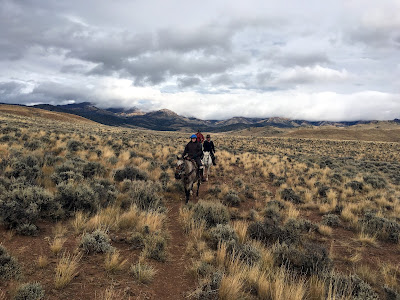 For the afternoon I was assigned Marcus, a large appaloosa. He was sort of a turd of a horse. Slow and pokey and not very nice either. A least he didn’t require a muzzle. We rode out with Mel into the valley in the opposite direction as we had gone that morning. The views were really nice from here as well, especially as the sun even came out a bit. As we rounded one hill we even spotted antelope. They took off at the sight of us, but they were cool to see even from a distance.

After the antelope, we came down the striped bentonite hills that we had a view of the day before. It’s very weird to ride through these hills. There are no plants and weird reactions from the ash and gases trapped beneath escaping over the years make it seem more like you’re on the moon than earth. 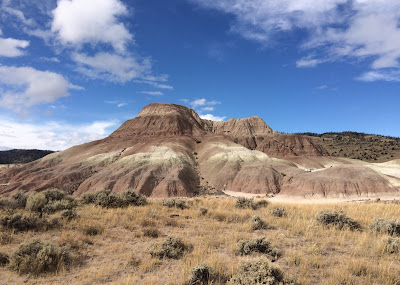 We came out and rode over to the same place we had been yesterday. This day we all did the moonwalk together as the second guide on our ride was actually a kitchen staff on a ride during her afternoon off. She was a good rider, but not able to lead rides on her own. The moonwalk was supposed to be another gallop up the hills, but a few horses kept shuffling and stopping and it wasn’t as smooth as it should have been. After we got to the top, Mel moved some people around so that the better riders were up front. We had a good, long canter after that and then rode back down to the ranch for the ritual creek leg soaking.

This was a much shorter ride than the cattle herding. We got back just before 5 whereas we didn’t get back until almost 6 from the cattle herding. This ride was a little over 5 miles. My husband forgot to start the gps at the beginning, so I don’t have a precise mileage count. Much faster than the morning’s ride though; we only took about 2 hours to do it.