Wednesday morning I woke up with a horrible cramp in my neck. The pillows are really terrible and I think I just slept weird. I don’t think it was related to riding. I had to put a hot towel on my neck, then bengay and then a bunch of advil just to get down to breakfast. I even had to have my husband help me put my boots on as I couldn’t bend down without pain.

During breakfast, it was raining and windy and really not looking good out so I went up to the cabin to exchange my rain jacket for my duster. Of course, this meant the rain stopped shortly after we got going. But I’d rather be over than under-prepared. I was assigned a new horse named Dutch who was another big drafty horse, but a pretty flea-bitten grey. We rode out with Paige making for a big rock outcropping up in the mountains. I have a terrible sense of distance when looking at things so to me that looked like a whole days ride away, but we got there and back in two and a half hours.

We rode through a bunch of willow and aspen groves. Apparently Fish and Wildlife returned beaver to this area years ago and they have damned up the creek in a bunch of places making bogs for the willow and aspen to flourish in. I was hoping to see moose as they like willow, but alas, we did not see any. 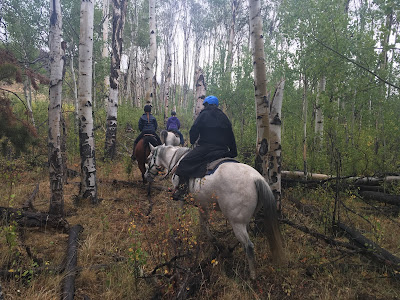 We also saw an outhouse and corral from back in the days when cowboys roamed the range with their cattle. We went for a bit of a canter coming back and one of the woman starting shouting for the guide to hold up. Apparently her horse full behind and then had to gallop to catch up. My horse kept having to trot because the guide’s horse was cantering so slowly so I do not know how this woman fell behind. I also don’t know why she couldn’t just gallop to catch up without yelling. 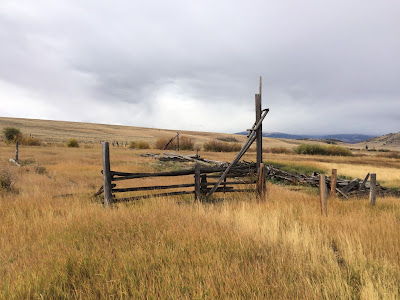 We came back through what used to be the owner, Bayard’s landing strip for when he had a plane. Apparently he “had a bit of a crash” (according to our British guide) and Mel said no more planes. The hanger had some farm implements in it, but no plane. The field was certainly flatter than the other pastures and more devoid of rocks, but I would not call it a suitable runway. I think the owners might be crazy.

Wednesday afternoon started out really cold. I went up after lunch and switched into my fleece riding tights and my warmer riding jacket. I was cold even sitting in by the fire. Of course, the sun came out and I was soon overly hot. It was a gorgeous afternoon with blue skies. We could see snow up in the far mountains that hadn’t been there the day before.

We rode out with Mel for this ride. I was on Nebraska and my husband was on Sienna. We started out going through a forested section near the ranch which was really pretty and nice as a change of scenery from the usual desert, bentonite, and sagebrush.

We rode out to the “Old Lady’s Cabin.” The cabin had been built back in the 1930’s by a woman who was homesteading it. She had to live there for three years to claim the land. She kept sheep and would ride into Dubois and sell cheese every two weeks. Apparently she made it the three years, but eventually left to live in Cody. The morning ride that had gone this way had seen two moose, but we once again did not see any moose. 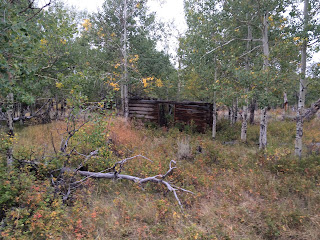 After leaving the cabin, we rode back through some of the same Willow we had gone through that morning and then had a nice, long gallop across the dessert. Then we climbed up to a really pretty view out over the valley. We could see both the Wind River Mountains in the one direction and the Abrasoka’s in the other. 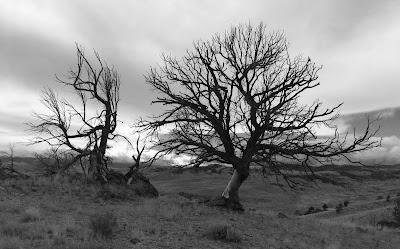 We also saw some cows down on ranch property that weren’t supposed to be there. Mel said the indians frequently cut the fence to let their cows onto fish and wildlife land because they have overgrazed their land and the cows are running out of food there. In the morning, she’s have one of the rides check on them to see if they were indian cows or the ranch’s cows that might have escaped from the forest.

One nice thing about going out with Mel is that she does a lot more cantering and faster cantering. We got to do a bit of running across the plains.

Then we started going down some pretty steep sections. I’ve had too many trips/falls with Dijon going down hill that riding down steep slows really freaks me out. We finally got to one section where Mel had us get off and walk down on foot. She asked us all if we were okay with that and I just said yes, but inside I was thinking, I was going to ask you if I could get off if you hadn’t asked first. 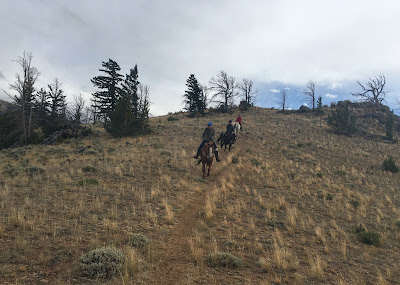 This was a pretty short ride. 5.3 miles 1:44 minutes 808 feet elevation gain. We took the horses to the creek for a soaking and Mel told us we would do cross country the next morning. She also told us horror stories about guests from earlier this summer who weren’t as good of riders as they said they were and messed up the cross country. As much as the previous riding camp director in me knows people like to lie about their riding ability, I’ve also been on the receiving end of Mel’s convictions about her horses and the people riding them. If you say anything about the horse you’re riding doing anything wrong (fast and doesn’t want to slow down or too slow and doesn’t keep up or kicks at the horse behind it or whatever, it doesn’t matter what you tell her), she says the same thing: that horse isn’t usually like that, what are you doing?

So I can believe that the earlier people misrepresented their riding ability. But I can also believe that Mel put them on a crazy-ass horse and then blamed them for not riding well-enough.

Mel also told me that Gannet gets excited while jumping and will ignore the reins and just bolt off doing whatever he wants. So yeah!

One thought on “Bitterroot Ranch – Wednesday”