Mel needed to run the Thursday morning riding lesson so she asked if we could do cross country on Friday and we said sure; we don’t care. So Thursday morning we rode out with a new to us wrangler named Alyssa. I was on Padlock and my husband was on Ranger. For this ride, we rode out to Butch Cassidy’s hideout. 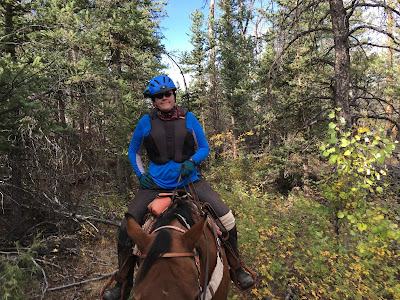 This was a really fun ride. We went through a lot of different terrain. Some aspen groves, some canyons, through some of the usual sagebrush country, and through some willow again. We got to see one of the oldest cabins in the valley; a trappers cabin from back when beaver hunters were wiping out all the beaver in the area. All the walls are original, but the roof had to be replaced and they added electricity only a little while ago. No running water still. Richard, the owners’ son, had moved there at 14 to be more independent of his parents. Now it is mostly unused though sometimes they’ll put a maintenance worker there if they run out of regular staff lodging.

We also rode over the first irrigation canal to be dug in the valley. They used dynamite and draft horses with a plow to build that irrigation ditch and it’s still in use today. After that we rode along the fence between the public land that we were on and the indian reservation across the fence. We even saw some indian cows eyeing us. At this point there was a view out over the ranch all the way to the wind river mountains. Apparently Butch Cassidy used this as a view point. One of his hideaway was right below.

We rode down the hill and found a section of fence down. It looked cut and not like cows had just pushed through it. A guy who works a few days a week for the ranch also works for Fish and Wildlife so they were going to call him to come fix the fence when we got back. We then rode down to the hideaway.

When Butch Cassidy was robbing trains he would frequently escape the law by having fresh horses stocked at various location in the valley. The locals would leave horses and food at the hideaways and he would leave gold for the locals. Apparently the locals all liked him and helped him out. There are even local legends that say he didn’t die in a gun fight, but returned under a fake name and lived out his days in the area. Unfortunately a tree had come down on the cabin just a year ago and it now just looked like a rectangular wood pile, but I guess it still looked like a cabin up until then. 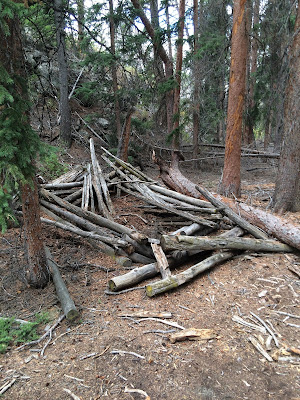 It was cool to see a piece of history like that even if it was pretty beat up. It’s also hidden in such a way that you’d never be able to find it without a guide. And it’s on a section of public land that can only be accessed by going through Bitterroot ranch or through the indian reservation and you need permission that is rarely granted to do either.

We left the cabin and continued through a section of aspen and willow somewhat near the old Lady’s cabin. We looked hard for moose, but didn’t see any. Then we rode over to look for the unauthorized cows and see if they were ranch cows or indian cows. They were all indian cows. Once the fence is fixed, Mel will probably still use her own manpower to push the cows back as the indians won’t come for them. After all, they want them there.

We got back to the ranch shortly after that, soaked the horses’ legs and then went to sit in the lodge before lunch because the lodge had a fire going. The morning had started out sunny and a little cool, but nice in the sun. By the time we got back, the sun was gone and there was a very cold and fast wind blowing. Everyone who had been out riding was freezing so we all hung out by the big lodge fire until lunch.

In the afternoon, we put on warmer clothes and headed out with Mel as our guide again. I was on Gannet and my husband was on Breezy. We started out just being cold, but then it started raining. We rode out to this vast grassy plain above the ranch. It used to be alfalfa fields, but now it was public land and the government had taken out the alfalfa. But they didn’t replant the fields at first so there were major dust problems. Then they tried for a few years to plow and replant the field and finally got oat seeds to grow this summer. The whole field was a giant grass sea. It was really cool to see the wind whipping the grass into waves.

While amber waves of grain are very pretty, they don’t provide any wind break. At one point we were cantering into the wind and getting pelted by rain. Since I was on Gannet again who likes to throw his head down and toss it around when cantering, there was one part where we were cantering down a little incline, into the rain, with the wind bashing us in the face and I have Gannet hurling his head around by his feet while I’m in two-point holding onto his mane getting yanked forward going down the hill. At this point I was like, no part of this is fun. 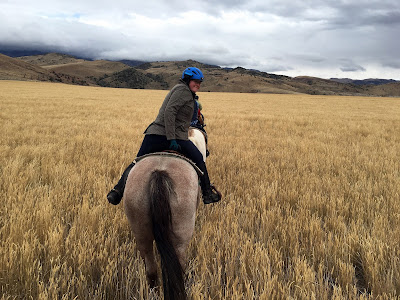 Thankfully, we turned around shortly after that so that at least the wind would be at our backs. This did make the ride a lot more enjoyable. Mel told us later at dinner that the ride usually goes much further out before turning, but she cut it short due to the wind and rain. We were all happy that she did. Most of the field had been plowed with some deep sections back when the government was trying to get native grasses and sage to grow back in so it wasn’t safe to canter through most of it.

We did canter along a few spots that were marked trails. Gannet kept hurling his head down and shaking it wildly after every little bump he had to “jump” over. I can ride it out, but I cannot ride it out if I’m required to ride in Mel’s patented ride in two-point and hold the mane style. Holding his mane just yanks me forward when he yanks his head down and a two-point is not a defensive seat.

After we left the grass sea, we did a little canter along a dirt road and Gannet took exception to Breezy being the track next to him instead of behind him. So he hurled himself over and kicked out at Breezy. I was yanking on his reins, but really there’s no controlling this horse when he wants to do something. Thankfully Breezy did not get kicked.

After this, we rode up a winding, narrow track stuck into the side of a hill and then along the side of a cliff. The doesn’t really show you just how steep it was, but it was not for the faint of heart or anyone scared of heights. It was really cool to see the canyon from this side. Thankfully there was a much more mild trail to descend from there. I would not have wanted to even walk back down on foot it was so steep. 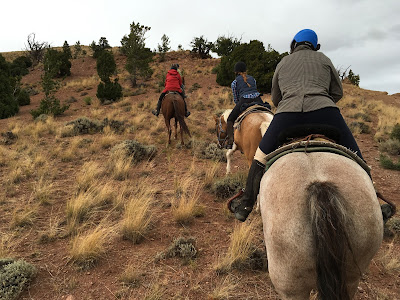 We arrived back at the barn shortly after this and soaked the horses’s legs. This was a really short ride since it got cut off a bit and we canted so much. We did 6.1 miles in 1:53 with 623 feet of elevation gain.

Since we were back early, we walked down to visit the foals in their pasture. They were super friendly and really cute. As soon as we walked in the gate, two of them came walking over to us. 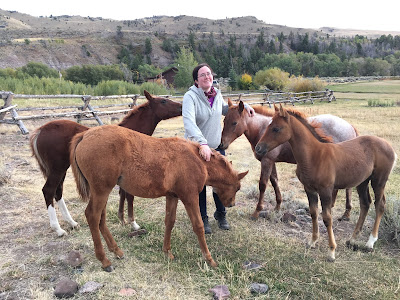 We were scratching them and they were making all sorts of faces and leaning into us and even trying to groom us back. There were 6 foals in total and 4 of them were totally into people. One of the littler ones was a little shy and got up from sleeping when we got too close. 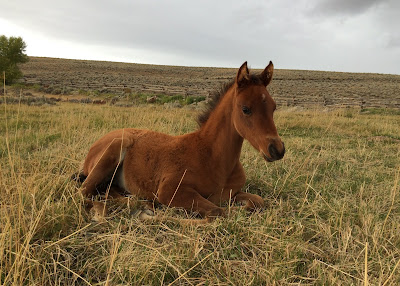 Another little bay let us pet him, but was a little hesitant. Mel said these are the newer babies so they’re not as used to people yet. She likes having all the guests play with the babies as it makes them really habituated to people. 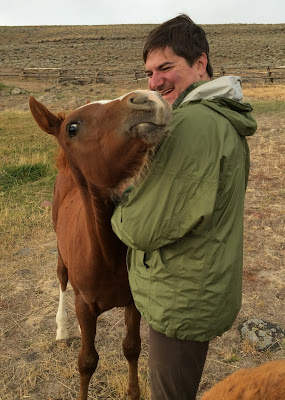 Two of the babies were following my husband and I all over the pasture just begging for more scratches and pets. We had to slip out of the gate to keep them from following us.