On Friday, my husband had a jumping lesson with Brian Sabo. I really enjoyed my cross country clinic with him and was excited to see that he was doing a clinic even closer to me at the Woodside Horse Park. I had originally scheduled both of us to have a jumping lesson, but then my barn owner scheduled the farrier to come that same day. I cancelled my lesson in advance and we almost had to do a no show or my husband’s lesson as well as our farrier was not running on time. We actually ended up trailering Eugene to the horse park, doing the clinic, driving back to our barn to pick up Nilla and Shasta and then driving past the horse park again on our way to go horse camping (full story coming). It was a very hectic day.

The lesson was great though. I had gone down to the office to pay our day use fee and found my husband already talking to Brian when I got back. Apparently Brian remembered Nilla as my husband told him we’d gotten 3rd at the HT and Brian’s comment was, “so I take it there were no lizards?” Yeah, that’s right. Apparently Nilla’s lizard phobia is that memorable. My husband had also explained what level they were at/ what goals they had and Brian got them started.

The whole lesson was a linear progression for Eugene. They started with trot poles: 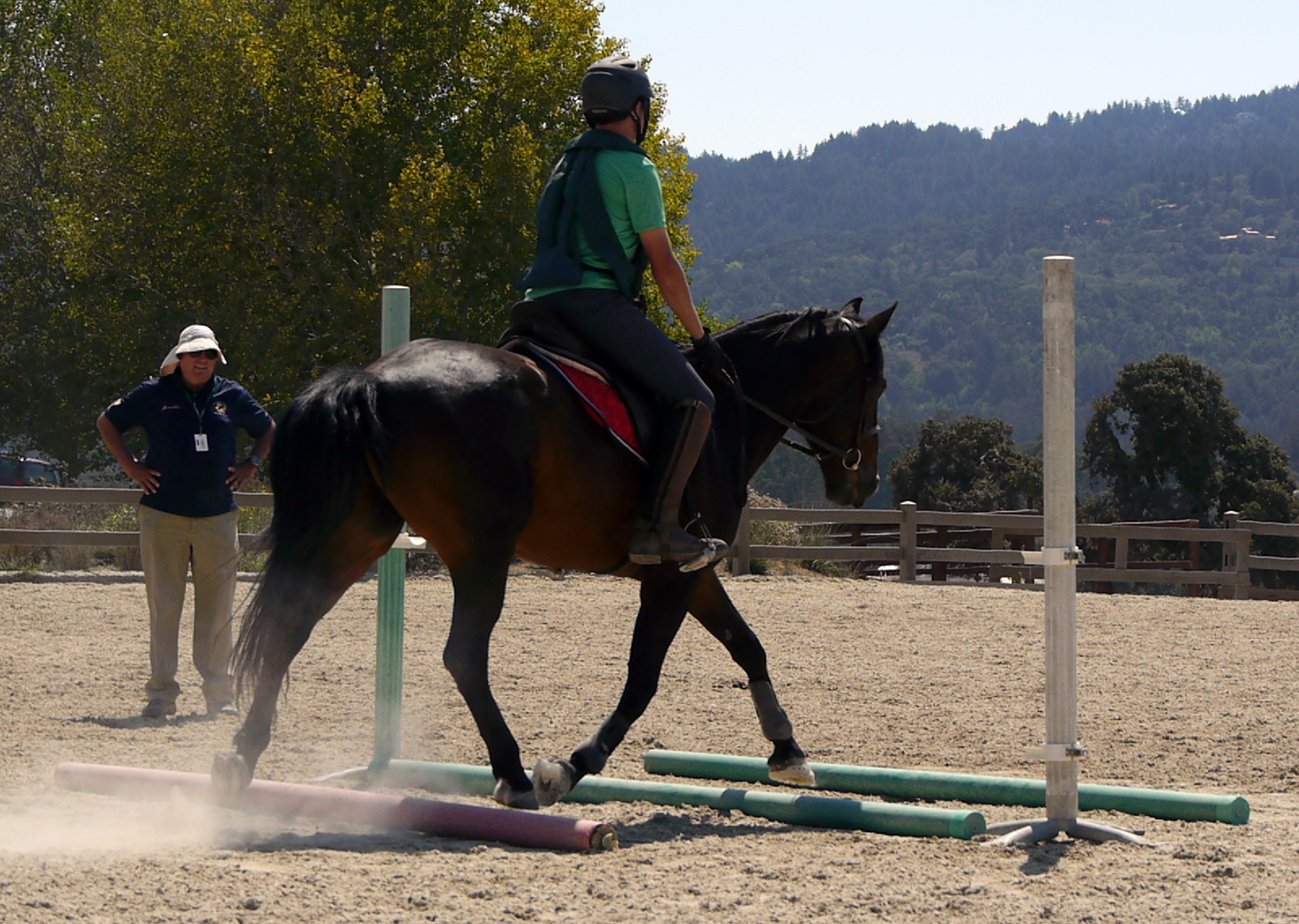 And then added a little cross rail with a trot pole two strides out: 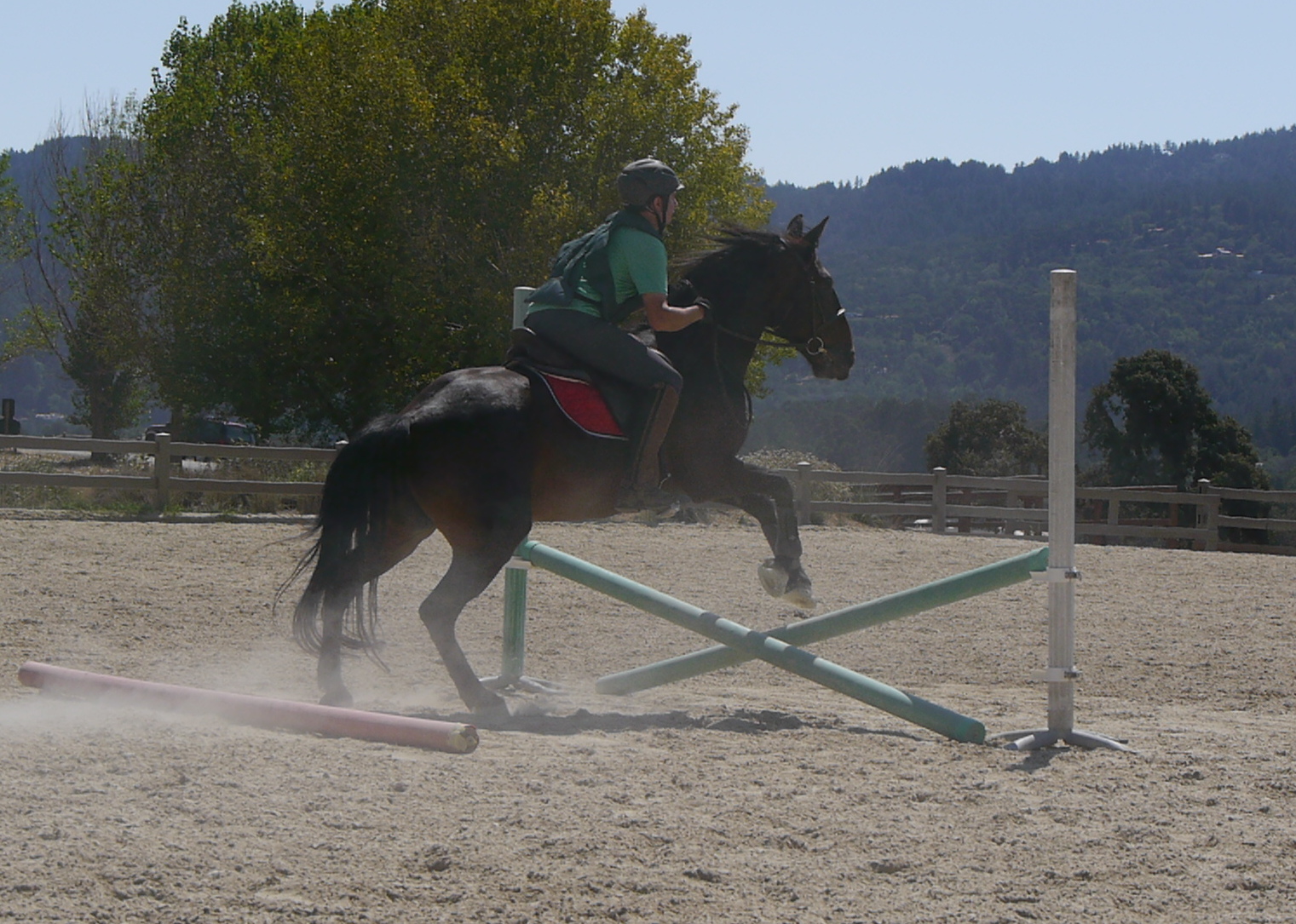 To which Eugene was like, eh, I can just sorta vaguely lift my feet over this. The goal for my husband was to get Eugene to land in the canter.Once he could go in and come out cantering, they did the same thing as a vertical. 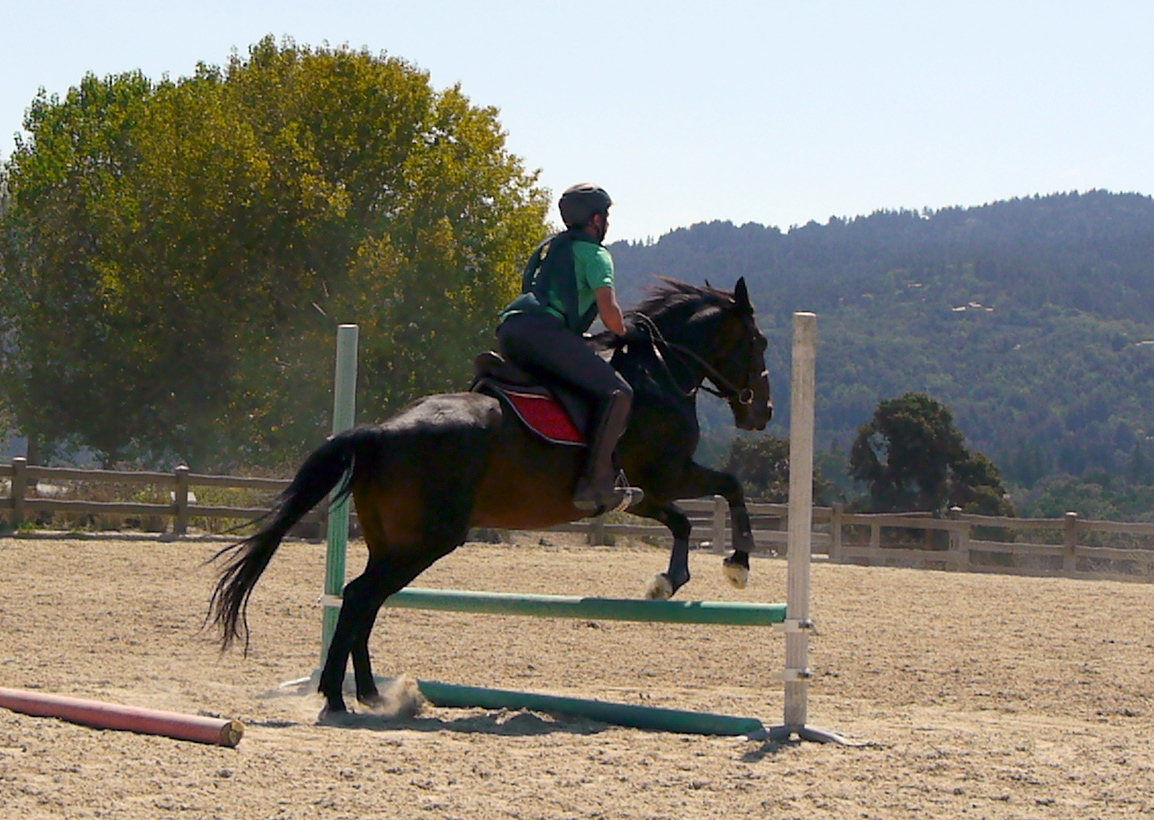 Then he was supposed to canter towards the jump, come back to trot a few strides out, trot the poles and jump and land in canter. Then Brian widened the ground poles and had them canter in.

It was like magic. I know that’s how poles are supposed to work and this isn’t really ground-breaking information, but it was so cool to see Eugene go from awkwardly trotting and knocking jumps to perfectly strided canter and a nice, balanced little pop over the jump.

After a few times over that, Brian added a second vertical that was aligned the same as the first but far enough to the side to allow for a big loop from the first. Canter in, land in canter, if the canter was on the right lead, keep cantering to the next jump, if not, trot to fix, then resume canter. 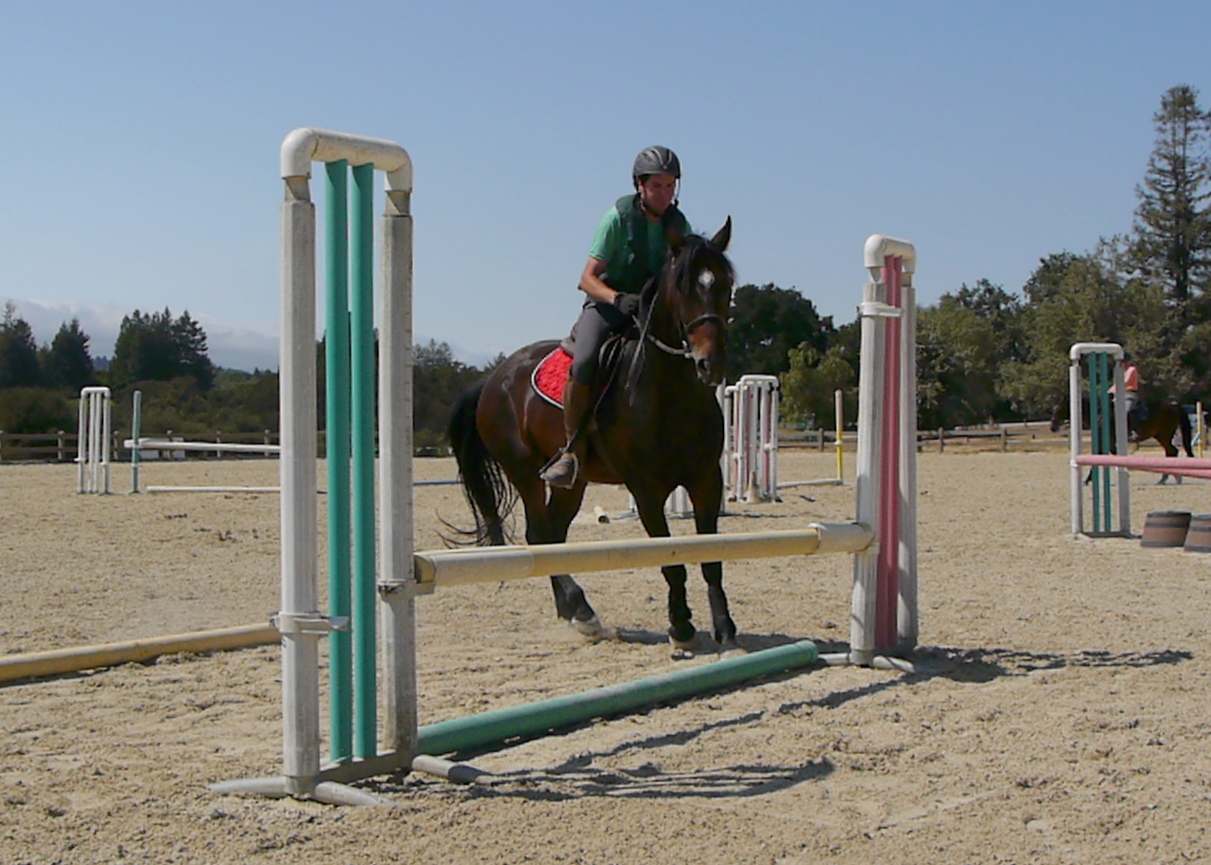 The first time the came to this jump, Eugene skidded out to the side around the second canter pole and then stopped. Brian said it was because my husband had picked up canter too late and there wasn’t enough impulsion. Which was probably true, but I think the fact that my husband was staring down the jump was a bigger contributor. My husband admitted later that he’d been staring at it because he was thinking it was the highest jump he’d ever done with Eugene.

Brian had them to some trot-canter transitions to get them more prompt before re-approaching. This time, Eugene hurled himself over… 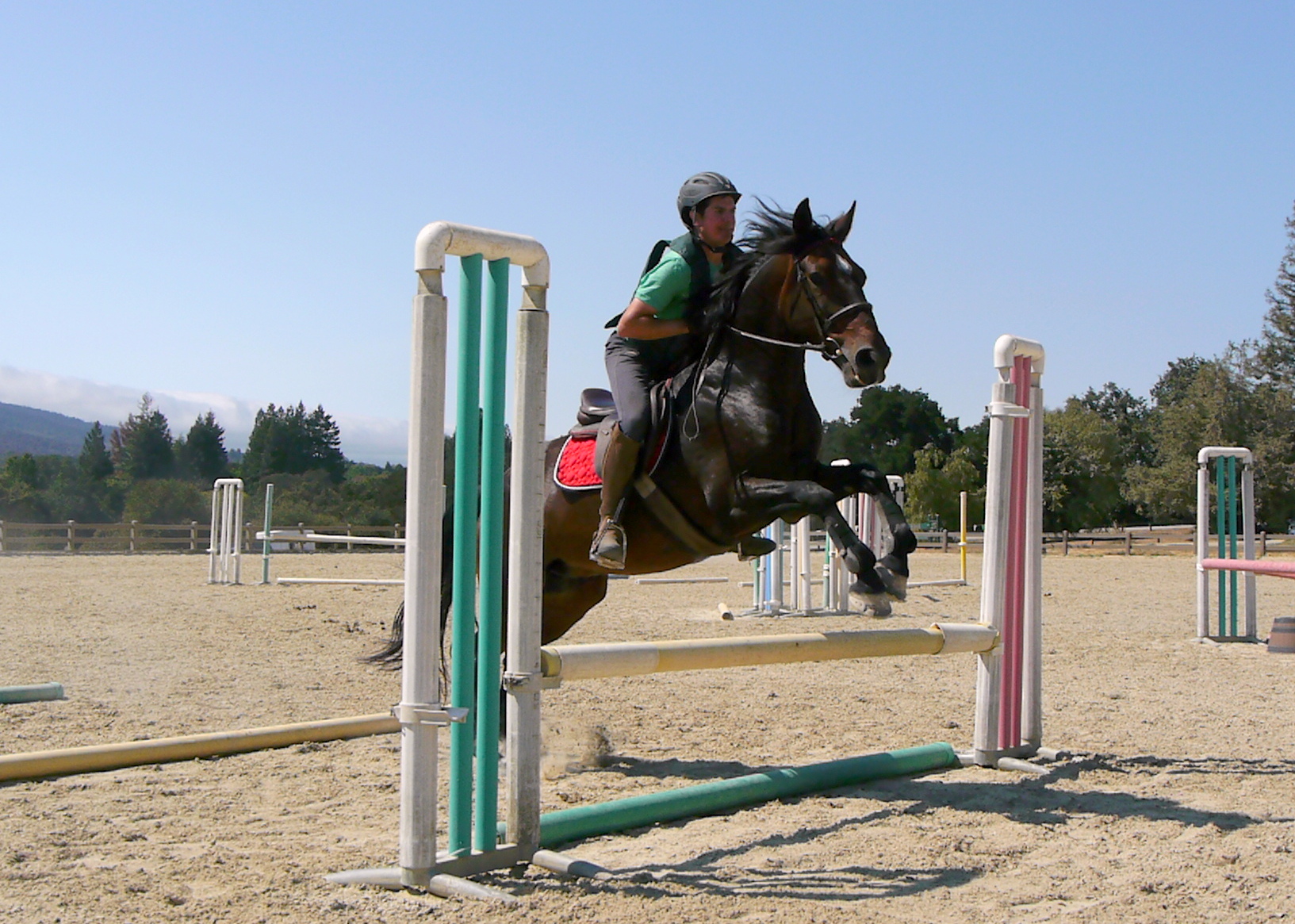 and landed with some playful bucking. So Brian had them do more canter-trot work to get him really listening. 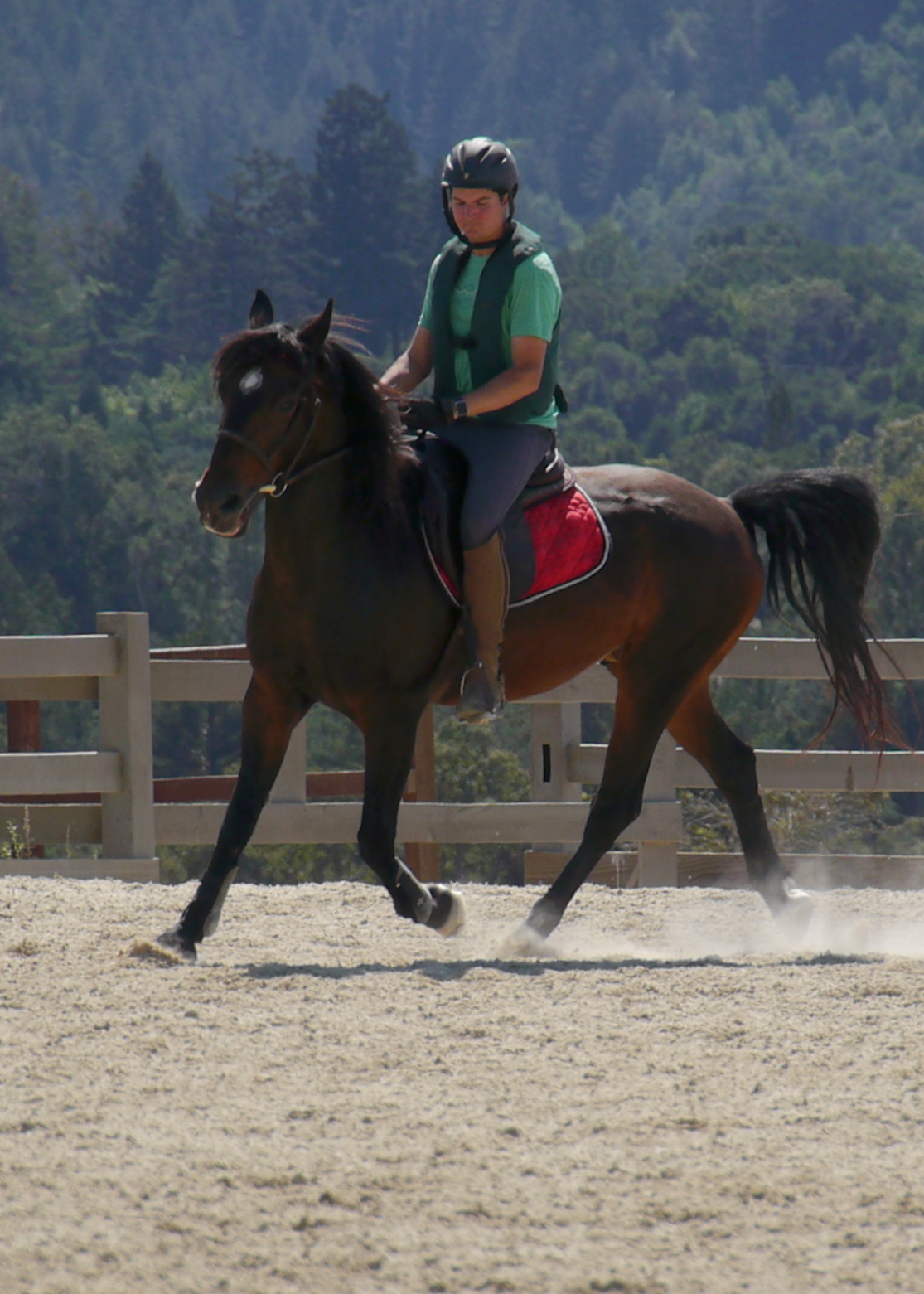 After a few more trips over the vertical, Brian set up a cross-rail with two buckets behind it. He warned my husband to anticipate him stopping and said to walk him over it if necessary. No need for concern though, he’s used to jumping weird crap so he popped over. But he did make sure not to get anywhere near it. Just in case. 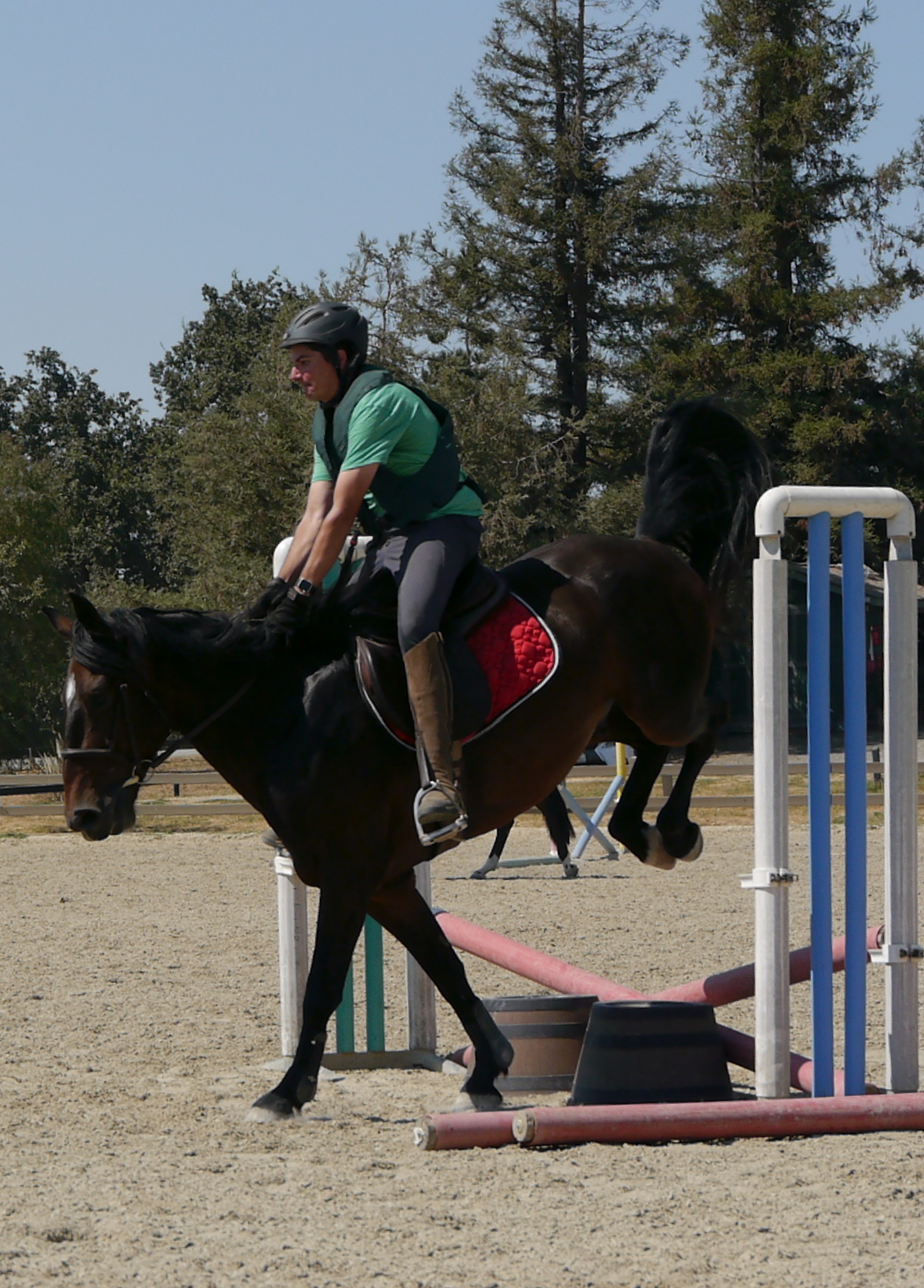 There was much more bucking and leaping following this. My husband got a lecture on how to handle this enthusiasm. Eugene wasn’t really paying attention though. 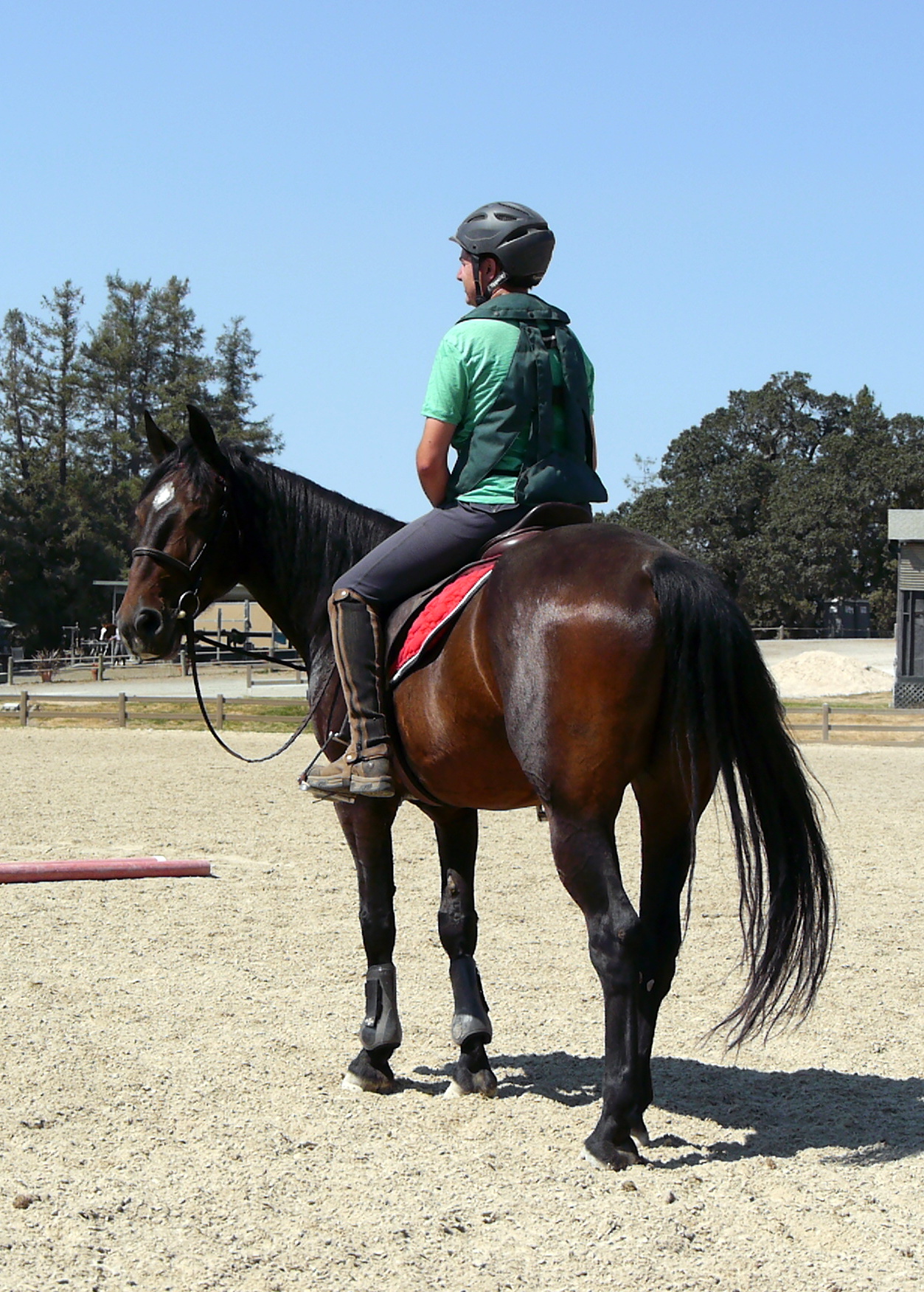 They did the jumps again this time with some canter-trot transitions on a circle to get him paying attention and then a final really nice jump over the big vertical with no playing afterwards and Brian ended the lesson there. 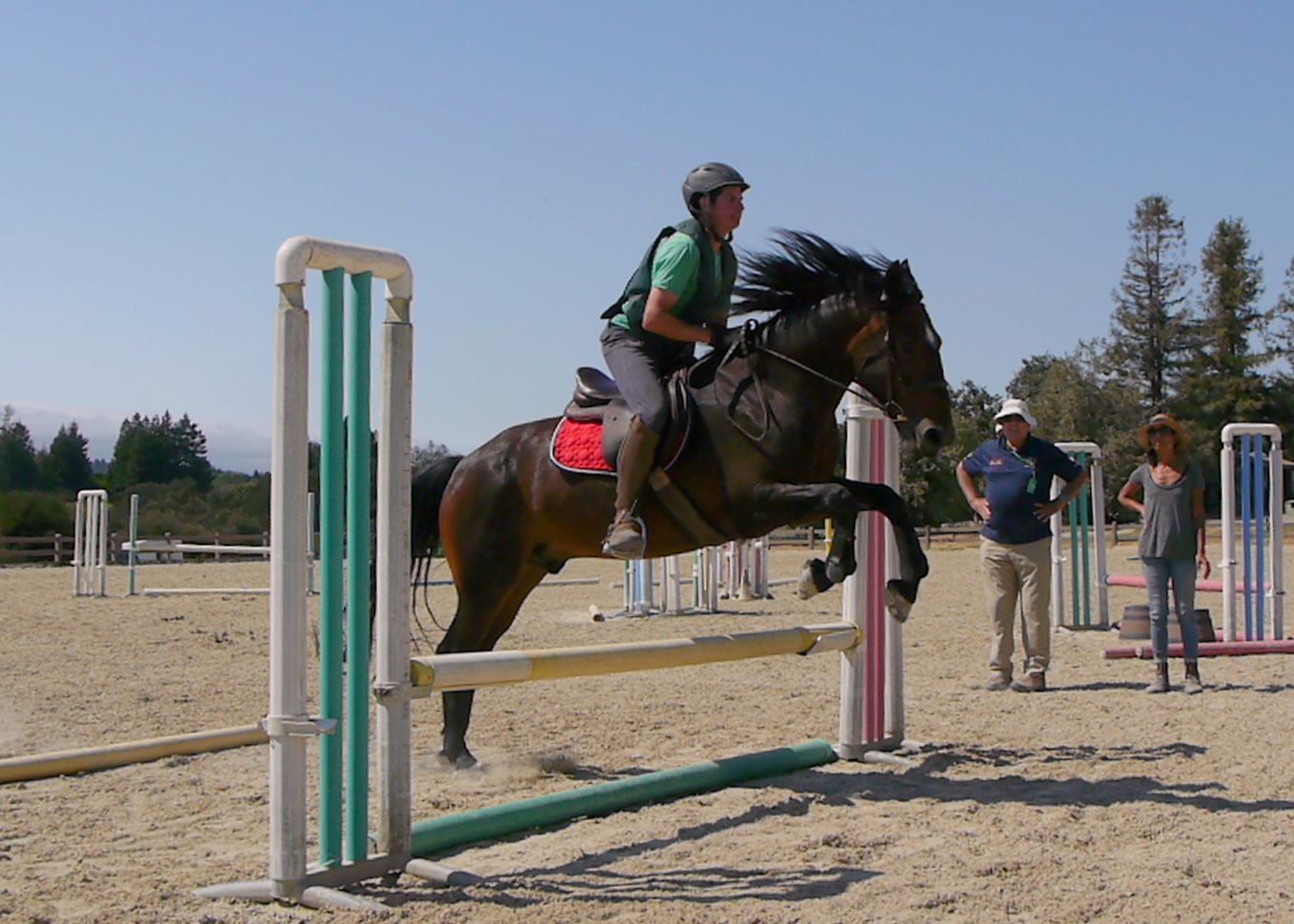 It was a really excellent lesson. Brian was very considerate of Eugene’s baby mustang status and expertly guided him to success. He was very complimentary of Eugene in the end.