Although he’s certainly pretty and I like (most of) his conformation, I bought Levi for his brains. A Mustang that’ll do a drill team exercise with a flag in a rope halter was very appealing. 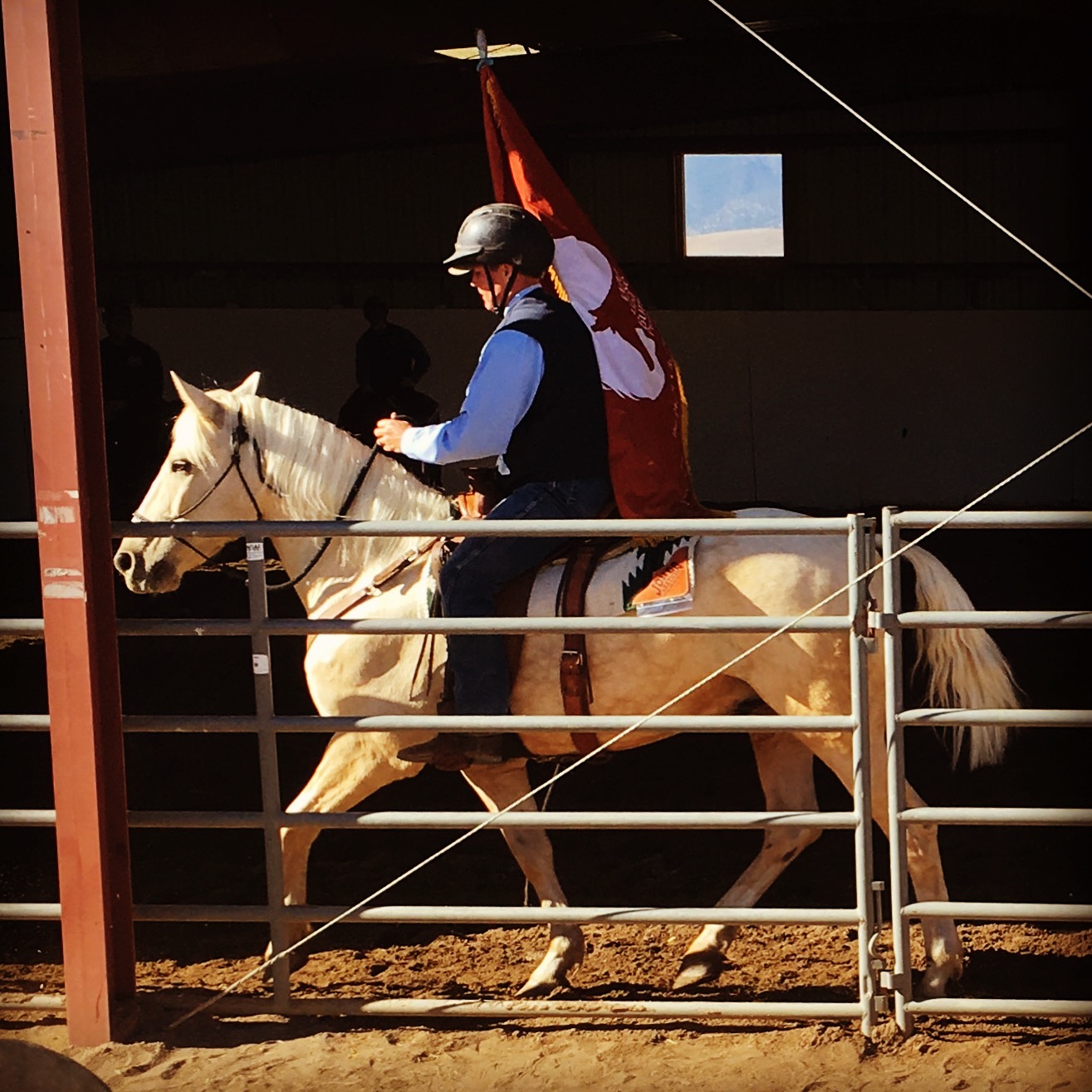 We picked him up on Sunday and on Tuesday he saw the Chiropractor. Eugene acted like the Chiro – who has treated him multiple times now – was going to kill him. Levi slept through it. When the handyman was using power tools to fix the drain in Levi’s stall, Shasta, Eugene, and Nilla were spinning and snorting over the noise even from multiple stalls away. Levi spent the whole time standing at the guy’s shoulder bugging him. At one point Levi even dumped a bucket of water onto the poor man.

On Monday, I had plans to trail ride at Rancho San Antonio with Kate. I thought long and hard about taking Nilla, but in the end shoved Levi onto the trailer and took him for his first trail-ride. Kate got tied up at her barn and we ended up having some down time so I took Levi out to graze in the model airplane/drone field. 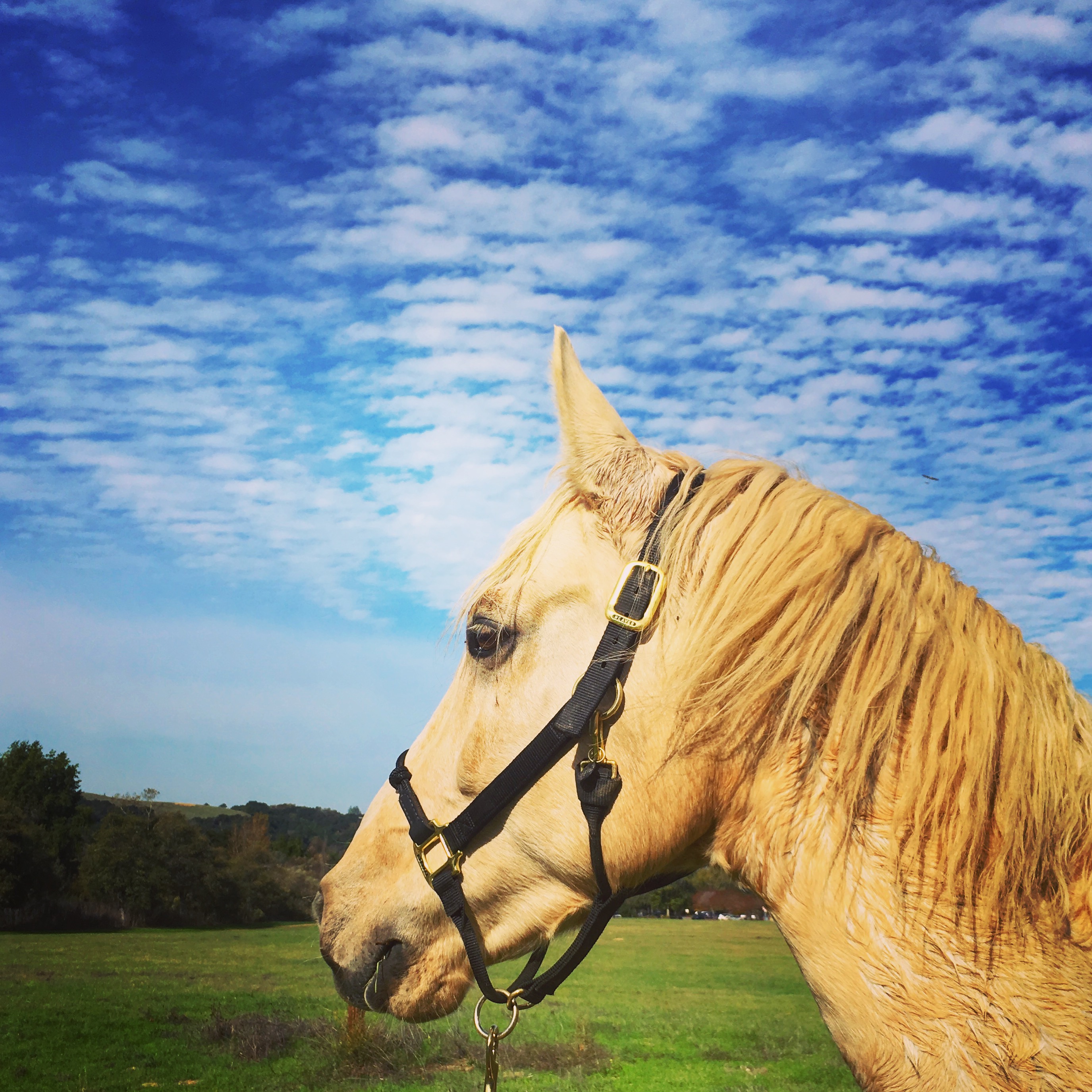 He was a little weirded out by the planes flying overhead, but got over it.

Once Kate arrived, we had a struggle with mounting – because he might have a good brain, but he’s still a baby green horse and standing still is just not something he wants to do. He wouldn’t lead across the first bridge, but he did follow Kat over. He was definitely looking at everything, but he didn’t have any real freak outs. Even when we passed a ton of deer. And he was a brave Mustang and led most of the way (because he walks too fast to follow, but still). 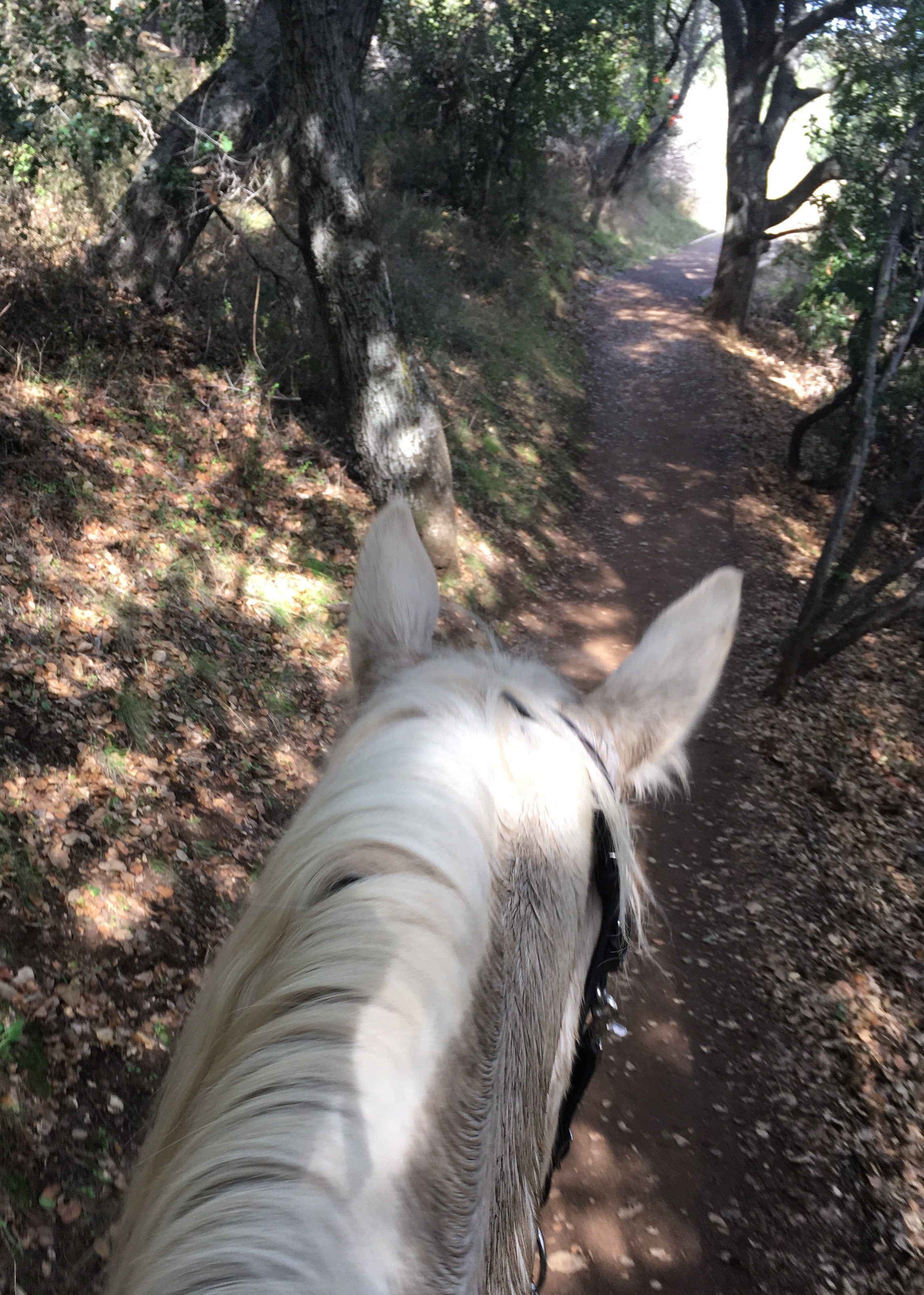 He even led across the second bridge although it took a considerable amount of persuasion. When we got up to the view point, he had a minor melt down about being asked to stand still – because he’s still an annoying young and barely broke horse – but he was mostly good. 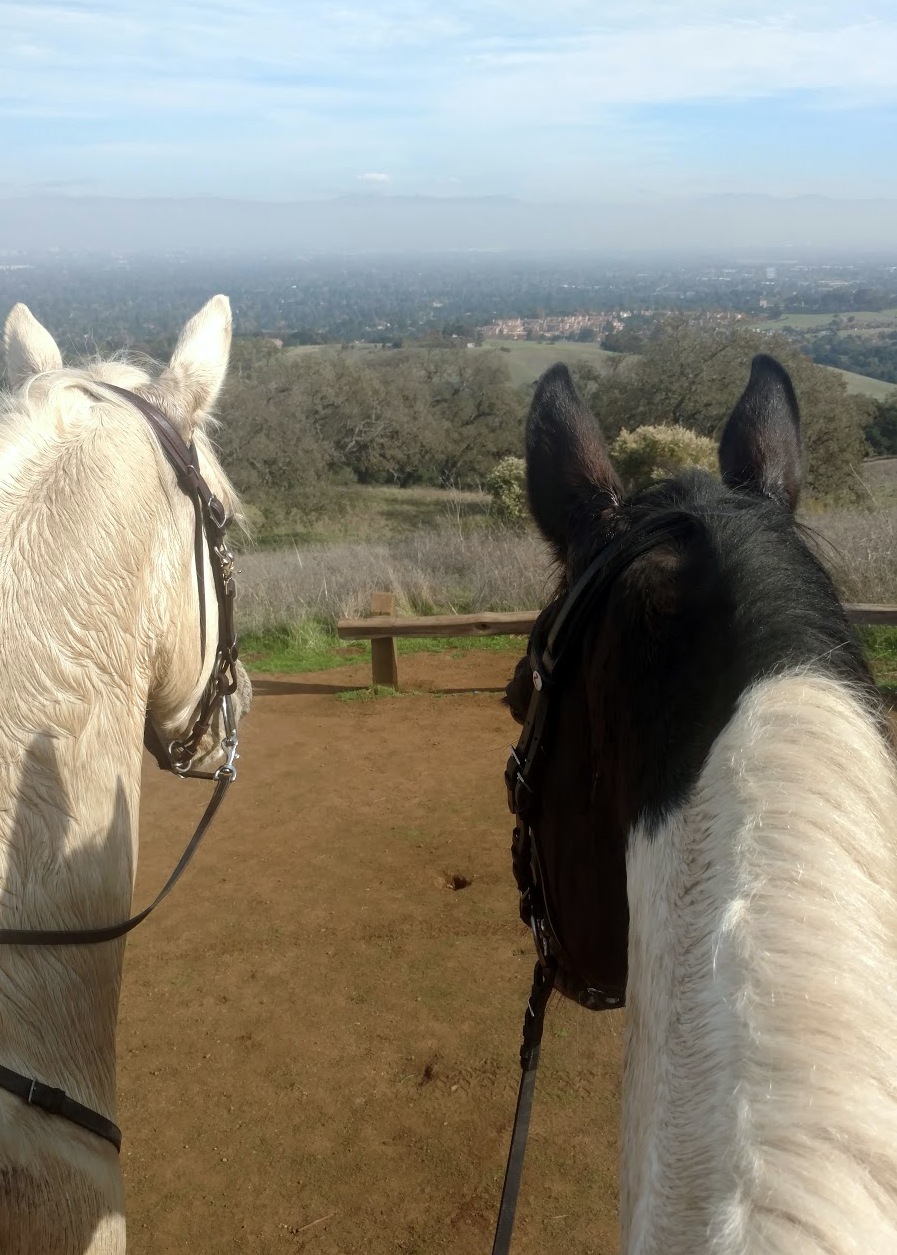 Stole this picture from Kate

Once back at the trailer, I had Kate help me get him loaded, because trailering is one of the things he’s truly terrible at. Like the dumb, impatient baby he is, he managed to get his foot into his hay manger while pawing, but let me unclip the manger and free him.

Since it’s been in the 80s this week and Levi has been coated in sweat even on short rides, I’ve been wanting to shave him. Trying to shave Eugene involved 2 ccs of ace, my husband wearing a helmet and his XC vest and still managing to get kicked once. Levi, who I have owned for less than a month now, snorted at and sniffed the clippers and then just let me do it. I actually hadn’t bathed him or put fresh clipper blades on because I thought I would just be doing some desensitization. But when, he didn’t care, I just went for it. 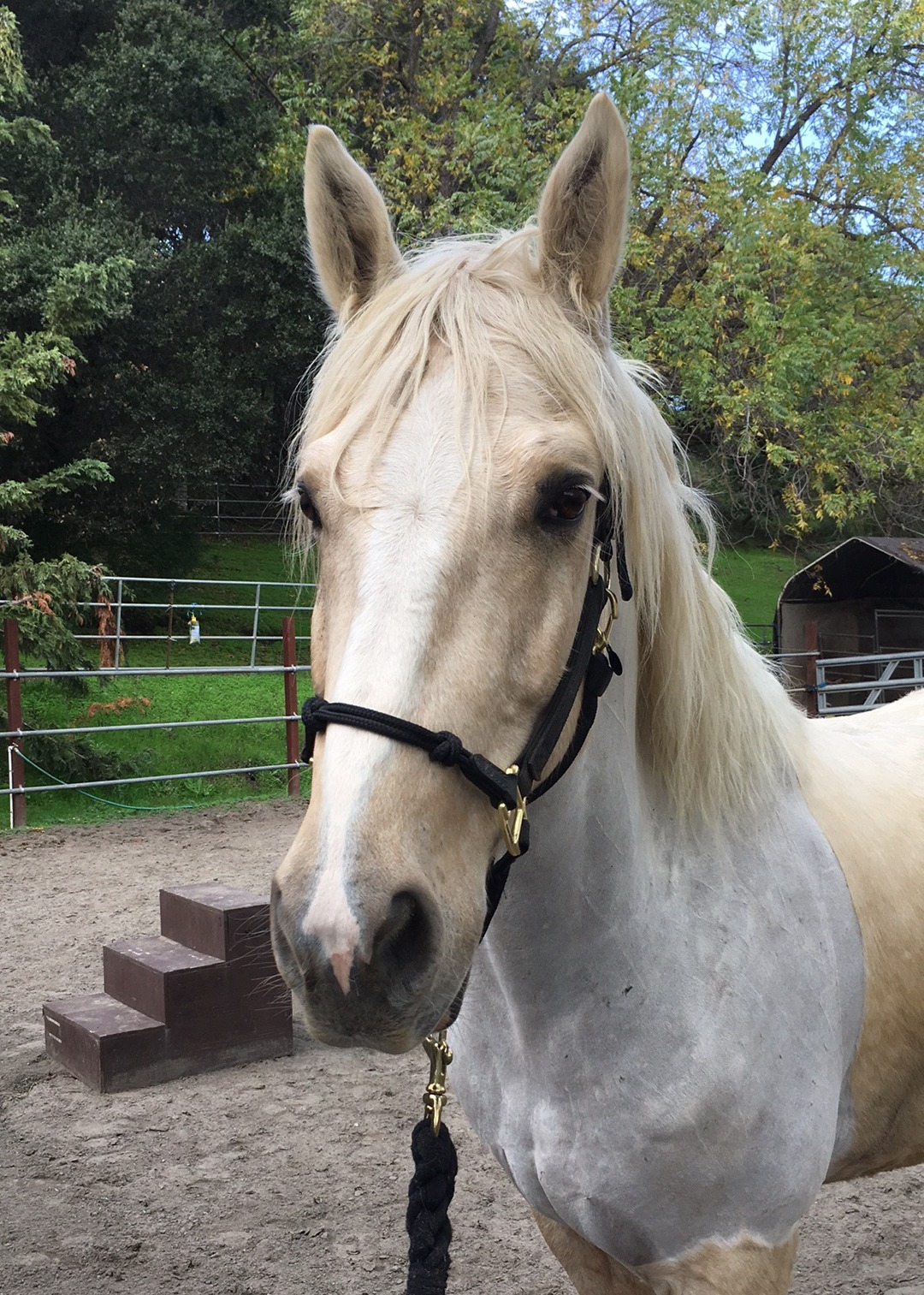 What a good boy! I need to find the new blades I ordered and fix up the mess I made, but at least he’ll be cooler now. As an added bonus, I can actually see his brand now. White freezebrands don’t so much show up nearly white palominos, but I found the scar of it under all that hair: 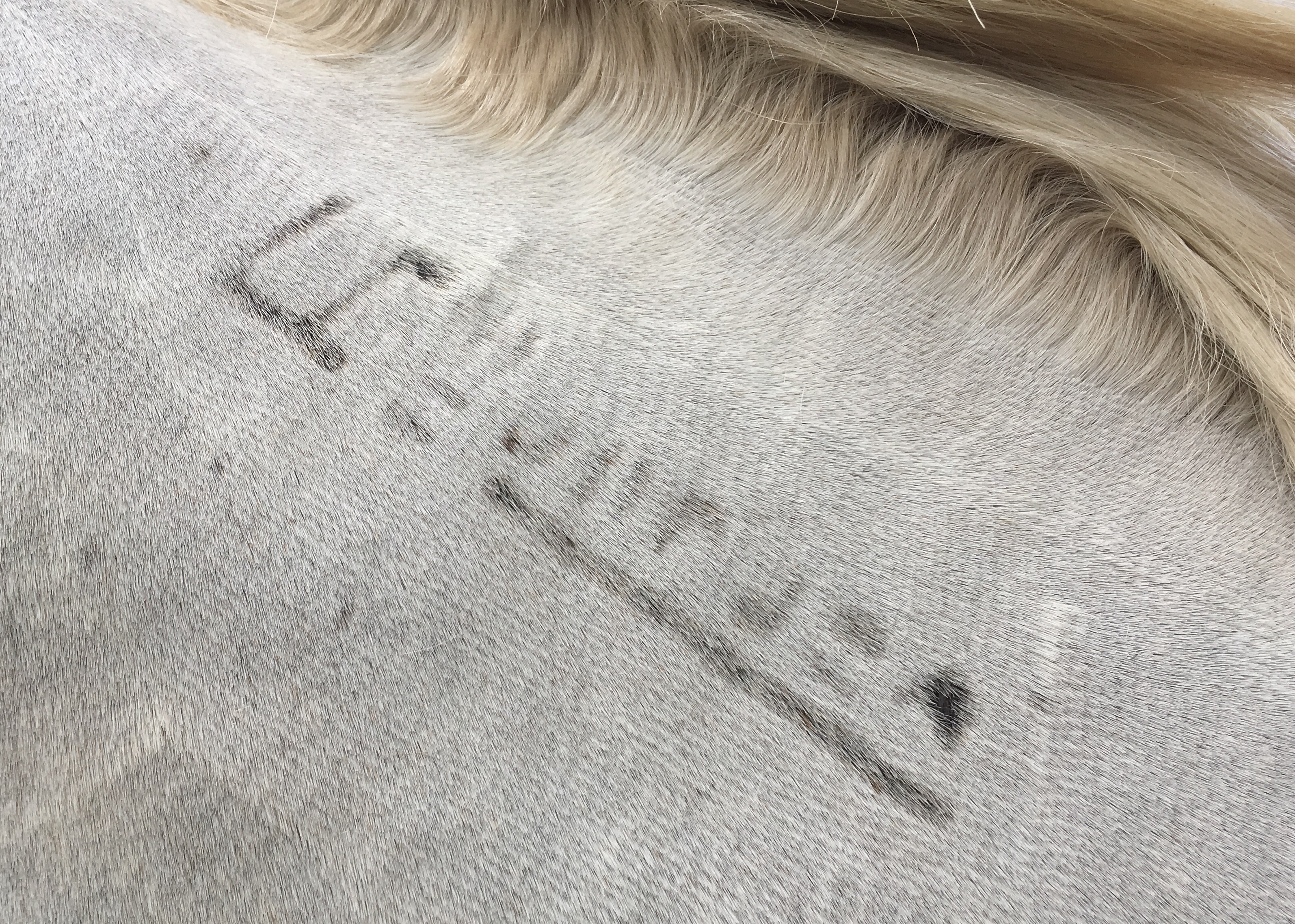 This is not to say I think Levi is anything other than a very green broke Mustang. He still has temper tantrums and tries to test his limits. He likes to invade your space and spook into you. He’s unbalanced and likes to try to bolt down hills. And Cod forbid you ask him to stand still under saddle. But the brain is there. 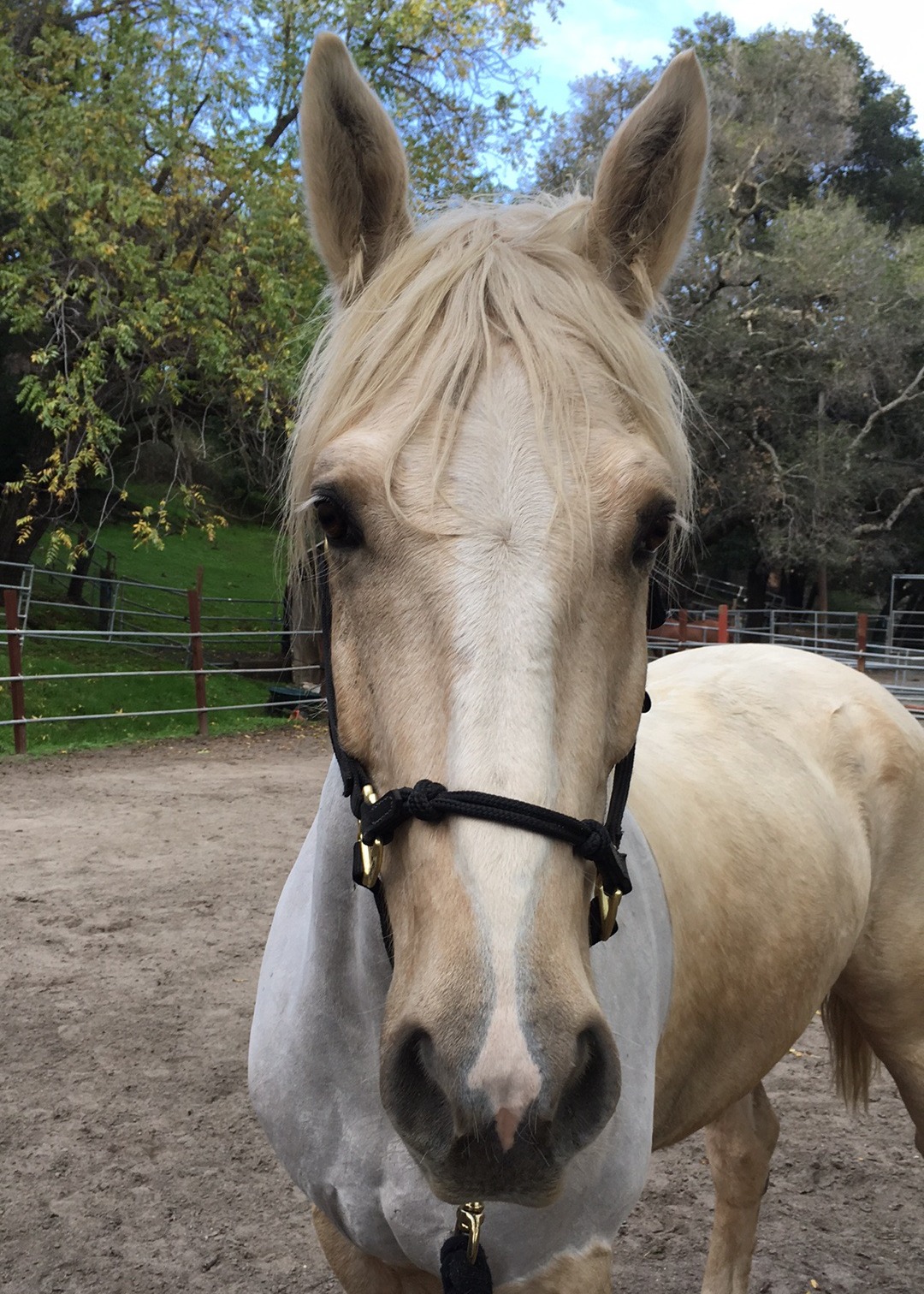 38 thoughts on “Buy for Brains”