This weekend we ventured back to RDLA for their schooling trials. My husband bumped up to BN and I considered doing Novice. Not that we’re anywhere near qualified for Novice, but the RDLA shows are so much easier than regular shows, I figured Novice at RDLA might actually look like BN anywhere else. However, the sign up sheet said they were combining Novice and Training and I didn’t actually want to die, so I just stuck with BN.

The teenager at our barn who leases a horse there did Intro at this show, so we were helping/watching her and didn’t get a lot of time to warm up. Nilla was pretty good in the warm up, but then we went over to watch my husband’s test. Nilla has a major problem with down time. Even in our lessons, if we stop for a few minutes, she assumes we’re done and will pitch a fit when asked to go back to work.

As soon as my husband was done, I hopped back on and get her to work in the little bit of waiting area next to the dressage arena. She got a little too hyped though and tried to canter into the test instead of trot in. I barely managed to drag her back into trot and it was not a pretty entrance. She then proceeded to try to run away with me on the first circle. Judge’s comment: “energetic strides, but almost cantered.” 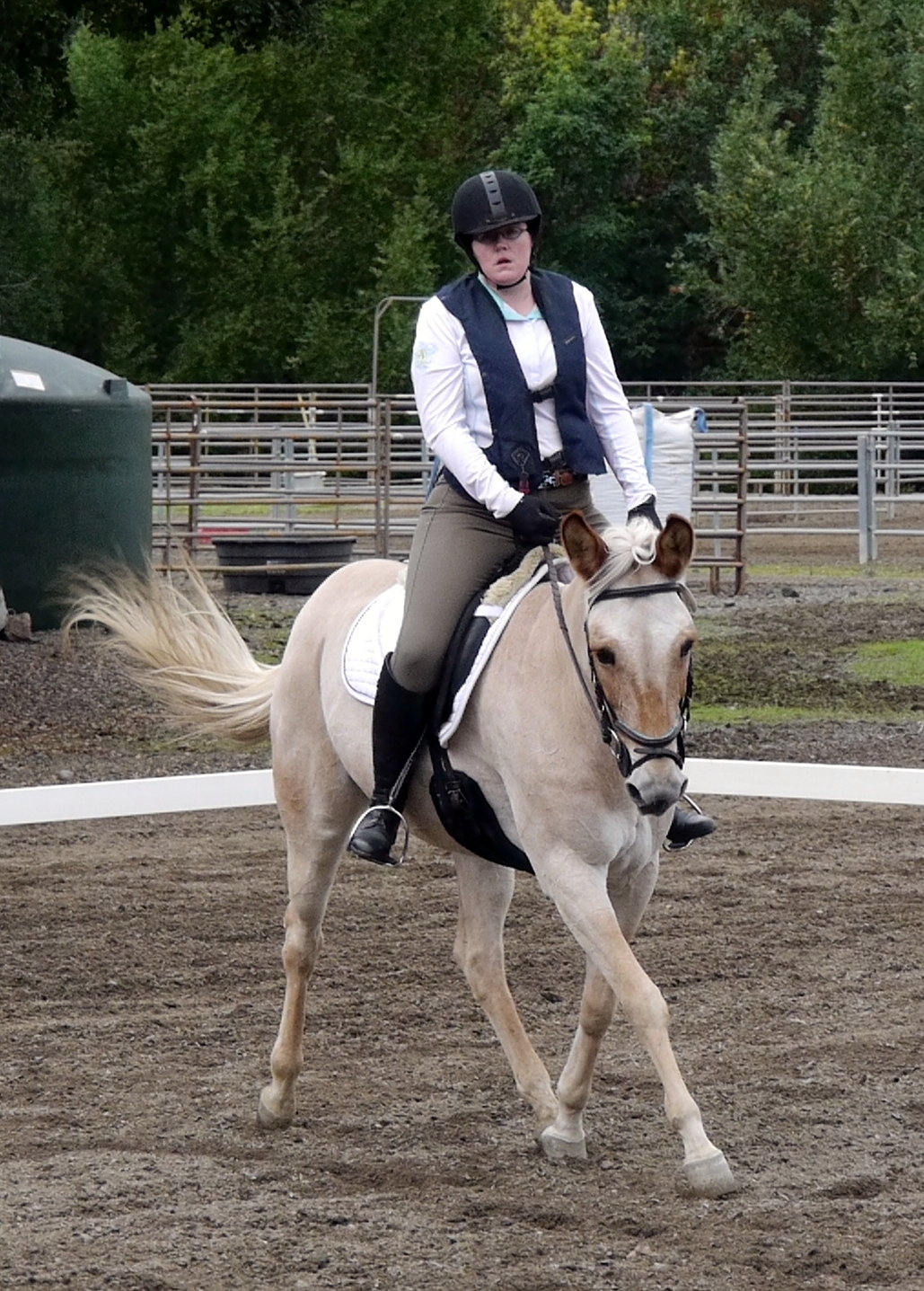 She also seriously contemplated jumping out of the arena at one point. Judge’s comment: “cut the corner at K.” Yep, that was me desperately yanking her away from jumping out. Sorry, not sorry.

Despite breaking into canter when I wanted her to trot, Nilla didn’t want to canterbetween K and A so at A I pony club kicked her and she crow-hopped into it. We got a 4 for that. No picture of that moment, but here’s some tongue action from later in the circle: 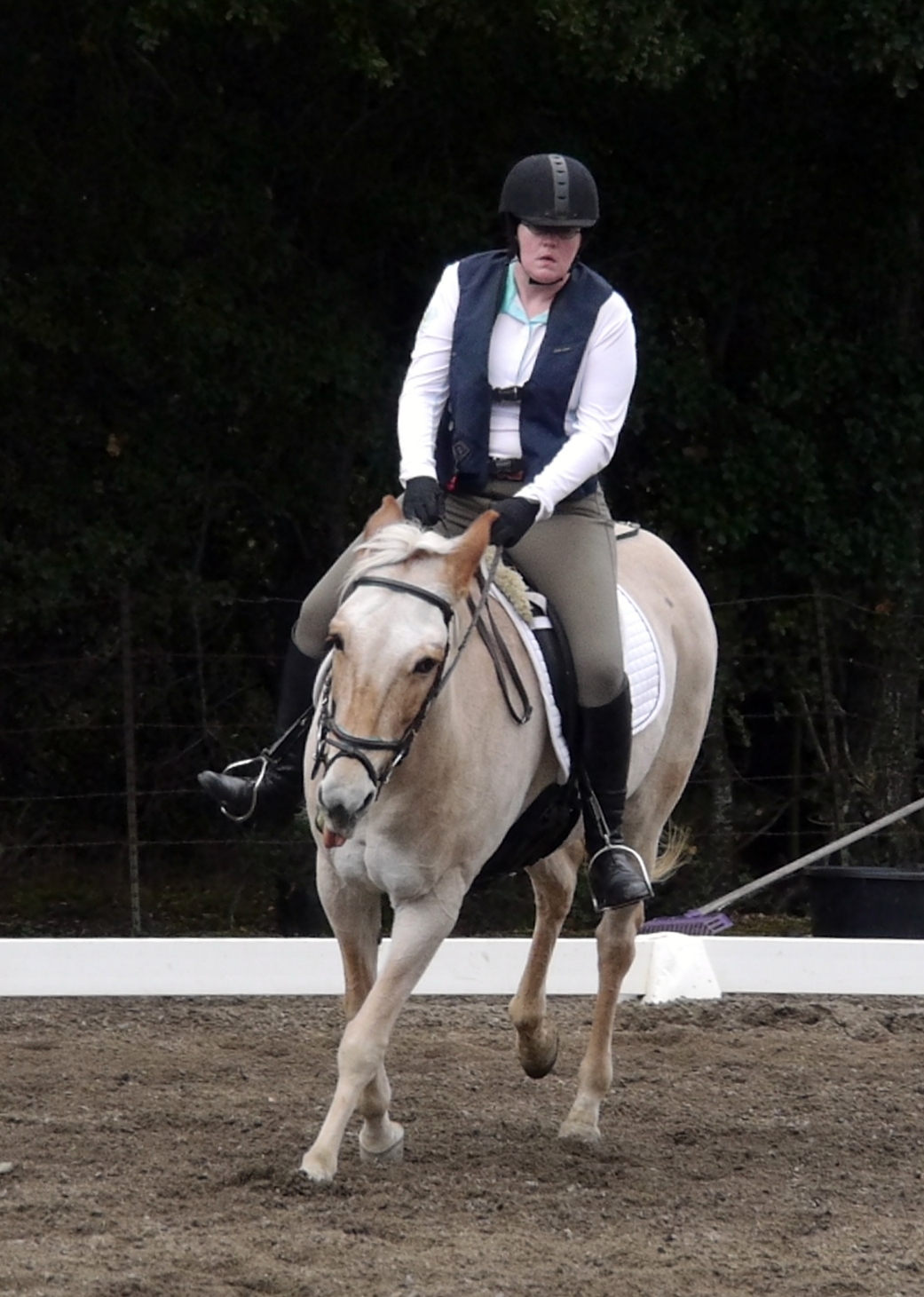 On our second canter circle, Nilla tripped and nearly fell out of canter. The judge’s comment was “almost tripped, unbalanced.” Accurate if a little too kind.

Now, everything wasn’t gloom and doom. We actually had the best free walk we’ve ever had in a test. Like Nilla actually stretched down like a real dressage mule. You know what, screw the comparative downplaying. This was one of the nicest movements I’ve ever had from Nilla in a dressage test and I’m just going to enjoy it. 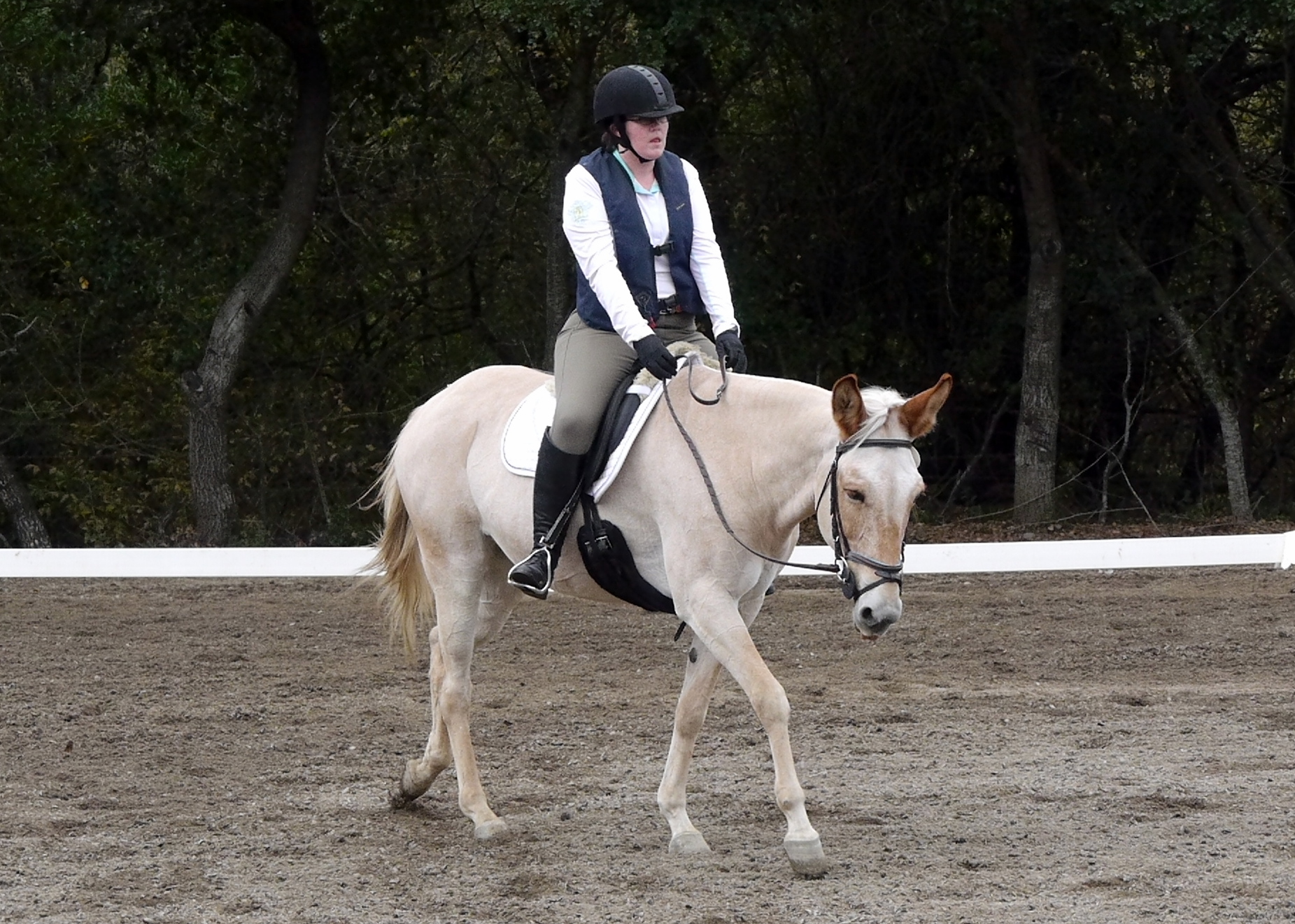 We also did some simultaneous tongue action during free walk. We are so in sync:

While not so great at dressage, Nilla and I are pros at simultaneous tongue sticking-out. 👅 #mulesofinstagram #dressage #tongueouttuesday

Our final score was 38.5, which put us in 3rd. My husband got 38.8, which was awesome for him, but it’s disappointing to me that I’ve had Nilla for almost 3 years and can barely score better than a Mustang my husband has had for like 6 months. I always knew I was signing up for difficulty when I bought a mule, but it’s still frustrating at times.

Stadium was even worse than dressage. Nilla was absolutely lit and massively over-jumping everything. She also was not listening to me at all. Which isn’t unusual, but it is annoying. We ended up with a rail down. While she over-jumps everything, she likes to bury herself into the base and knocked a rail with a back foot.

I call this series: “OMG, Nilla, the jump is down there.” #mulesofinstagram #overjump #eventingmule #horseshow

Everyone watching us were very amused at Nilla’s antics. It’s certainly a lot more fun to watch her jump than to try to ride it. She really bounces me out of the tack. Apparently one of the spectators was asking how I stay on and the trainer at RDLA who was judging the jumping commented that I have a very quiet seat. She’s a very nice person, but pretty old school as a trainer so getting a compliment is rare.

My seat might be quiet, but my leg is really no good at staying still. This isn’t news to me and I know I need to work on it. Part of the problem is that I have a bad ankle. I was actually supposed to get an MRI months ago, but I’ve been putting it off. Partly because I’ve been busy, but mostly because I don’t really want to know what’s wrong with it. The answer is most likely surgery and then lengthy PT and recovery. And I don’t want to stop riding, so I’ve been avoiding the whole thing. But the ankle is getting worse and worse. I can no longer raise my stirrups to an actual jumping height. Hell, a lot of days I limp walking, let alone trying to put my heel down in a stirrup. 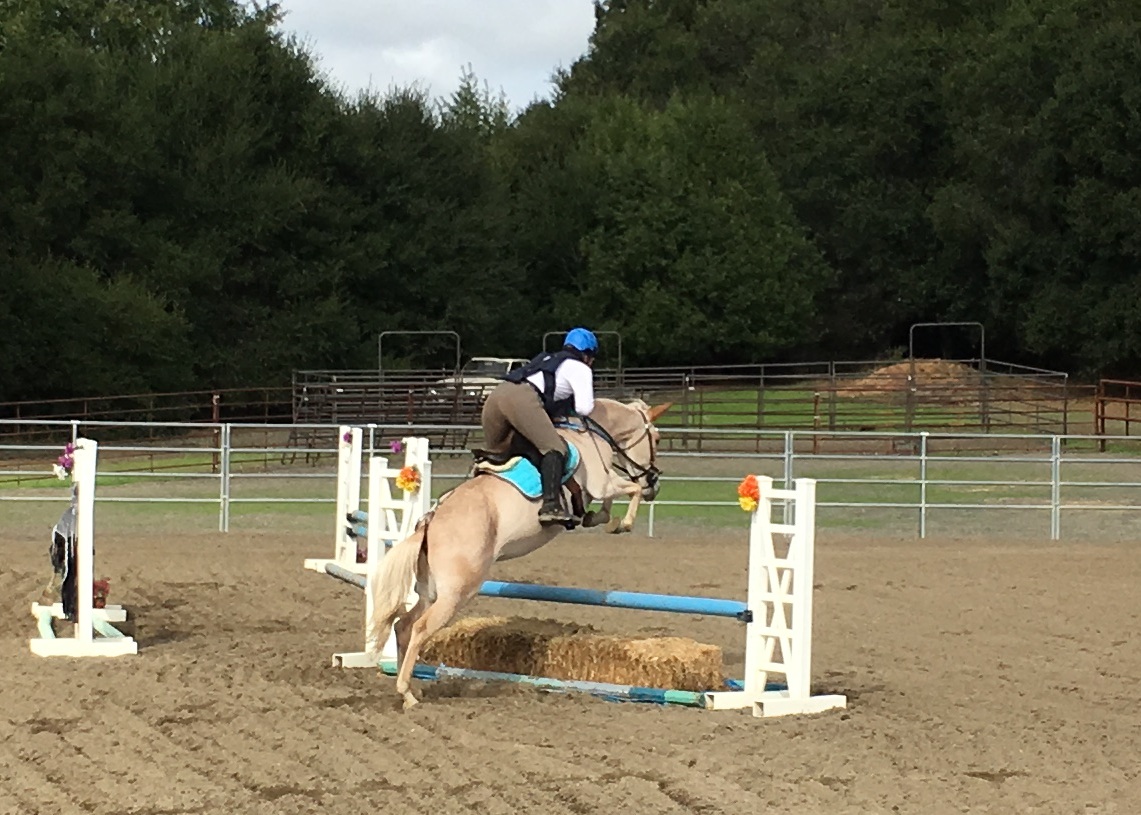 I know that’s not really an excuse and I am definitely putting in some serious No Stirrup November work to make up for it. But even while I flounder around on her back, Nilla really has got the most amazing jump. I mean, look at those knees. She just needs a better rider. 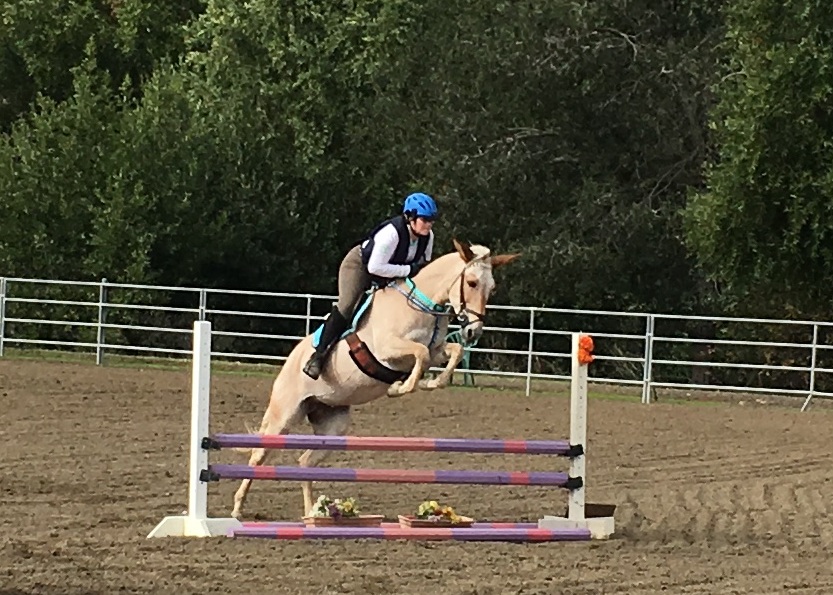 After stadium, we headed over to cross country. We had walked the course earlier and it was more challenging than last time I did BN there. Most of the jumps were still Elem height, but there were some bigger ones mixed in and some actual challenging lines. Here’s the coursewalk link.

Does anyone recognize #7? Maybe this meme from 2ptober will ring a bell? 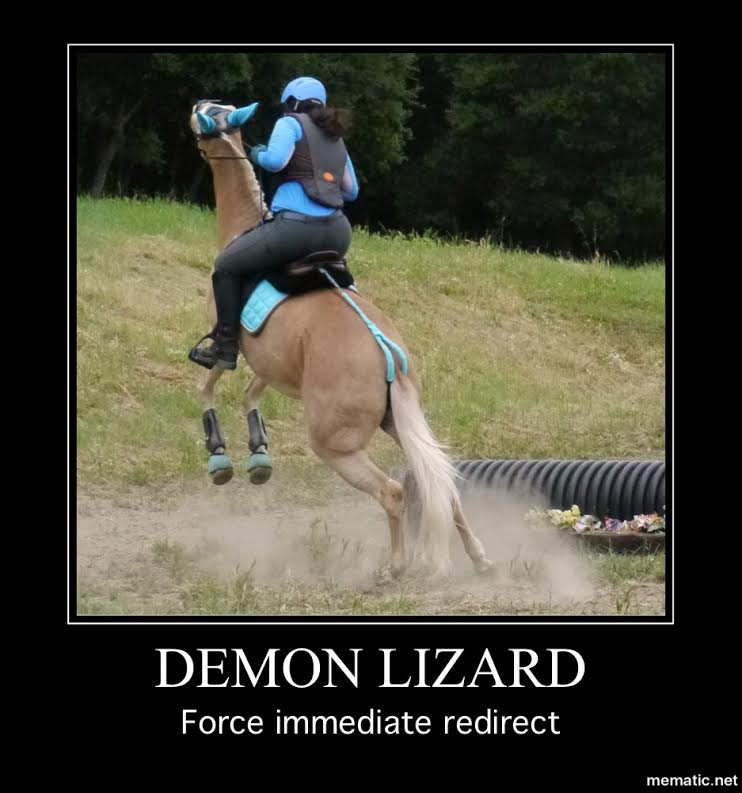 Yeah, Nilla doesn’t like that jump. After the demon lizard threatened to kill her there at the Brian Sabo Clinic, she also refused it at the last RDLA schooling show that we did. Obviously I was looking forward to that. #2 was on a hill that was more apparent in real life than in the picture. I thought #3 might be a little scary because of the barrels, but Nilla doesn’t mind skinnies. The line to #4 was really hard. It was set back in a way that made it difficult to get a straight approach, but it wasn’t huge. #5 was also downhill, but not so bad as #2. #7 was obviously going to be a problem, but the rest were easy.

During stadium, I had landed awkwardly from a jump and really wrenched my already bad ankle. I told my husband before I started XC that I might pull up and quit and to tell the judge why if I did so. But adrenaline or something made it not really bother me. We rocked around the first half of the course. Nilla was too busy staring at the corner going towards #3 that I was worried she wasn’t looking at #3 itself, but she popped right over that. I had to slow her down going to #5 because the ground was a bit muddy and it was downhill, and she dolphined a bit landing off that (you can watch her # go flying off), but otherwise we were good until #7. 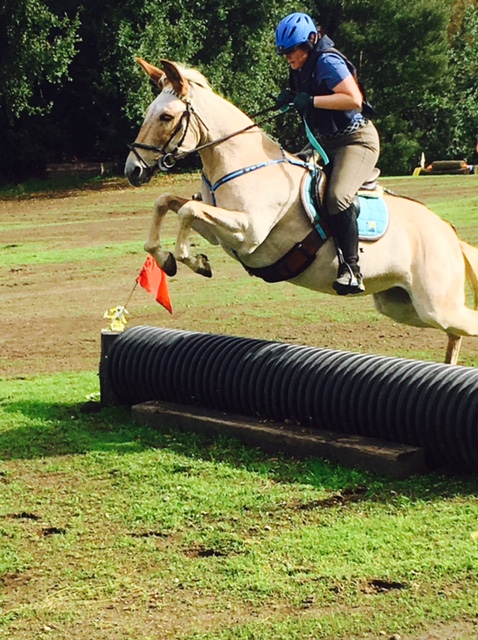 A few strides out from #7 I could tell she wasn’t going to do it. I pushed her hard, but she slammed on the brakes, popped her little rear and spin move and we had to re-approach. I talk to Nilla/myself quite a bit, so you can enjoy my commentary in the video. The stupid jump isn’t big so I knew she could jump it from a standstill if she had to. As we approached, I looked down to grab the neckstrap. She leaped the freaking jump like it was toxic and my neckstrap broke. That unbalanced me so when she landed bucking I ended up getting bashed in the head. She broke the cambox and my glasses and – I only learned later – cut up my forehead. Thankfully, she only broke part of the plastic on the cambox so it’s still working. 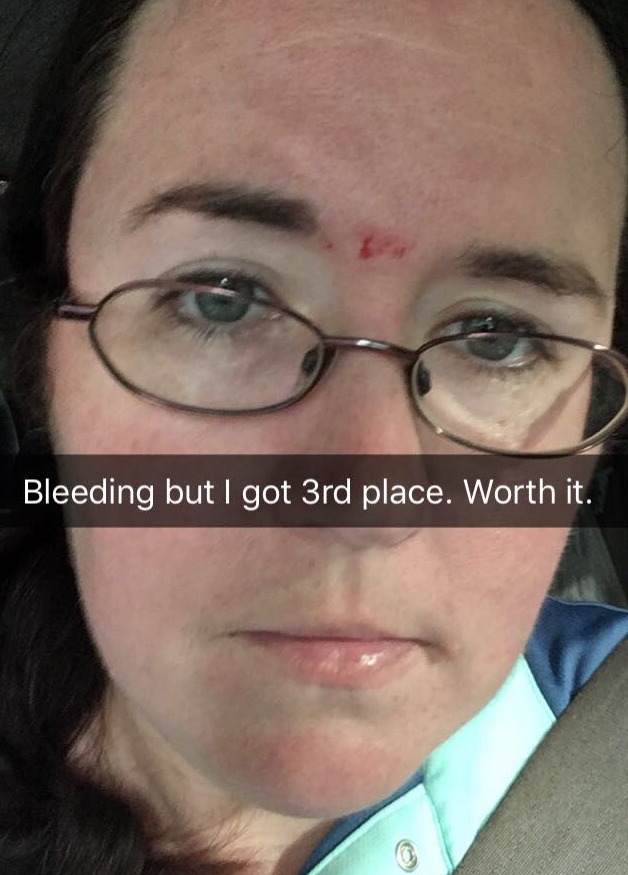 After the head bash, I had to circle at the walk while fixing my stirrup and my glasses. I cut this section in the video because I needed to make it shorter to upload. #8-11 were nice and easy. Nilla was a little attitudinal post-jumps, but she was mostly good. The judge even commented on how it was odd that Nilla was so scared of the spiral jump, but flew over the skinny and the ditch. Yeah, Nilla doesn’t actually care about jumps, just lizards.

You can bet we schooled the crap out of that spiral afterwards. I got off and walked her over it a few times first and wouldn’t you know it, I found the damned lizard. F*cker. Whatever. Imade Nilla go over it multiple times in each direction. Both with me on the ground and in the saddle. Once that was done, I went off with my husband to school a few other jumps and try to help the girl from our barn school as well. We also hung out and chatted with the people from our barn. Our barn owner, the parents of the girl showing, and the owner of the leased horse came out to watch. Our barn owner was so impressed that she wants to build us a cross country course in the abandoned meadow next to our arena. I love our barn. 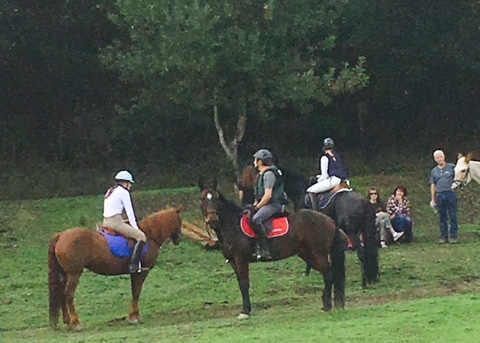 black horse isn’t from our barn

One of the other people in our division had two refusals so I actually managed to hold on to 3rd out of 4. I was excited though because my ribbon matched my bridle and my husband’s matched his. (Of course a blue ribbon also would have matched mine, but whatever.) 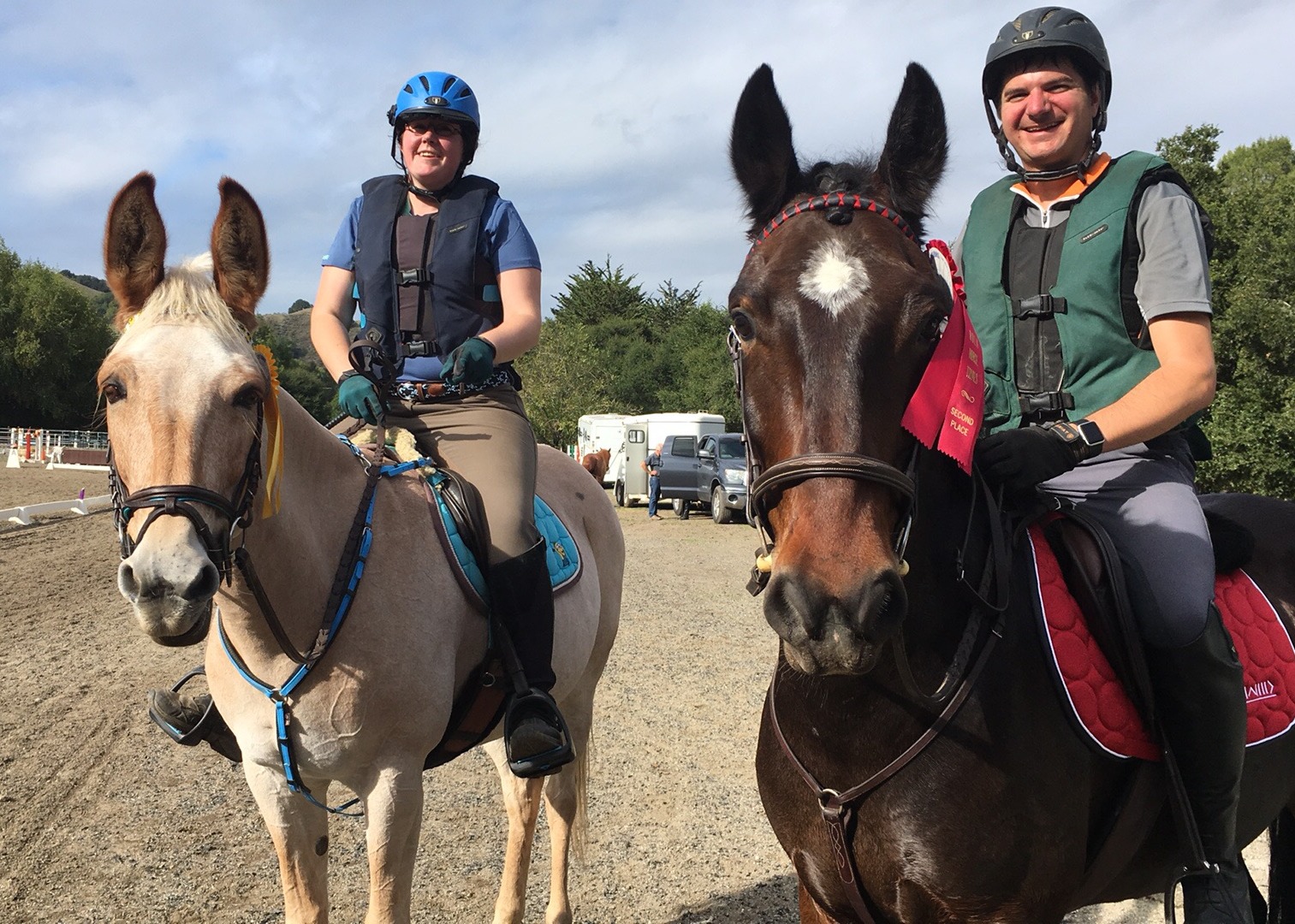 Despite all the nonsense, it was a fun day.  This was most likely my last show with Nilla until next spring so it was fun to get out there with my husband and our barn team to just enjoy ourselves.