Since Nilla’s in training I’m not riding much. Dijon is leased 3 days a week and they do not correspond with the days Shasta is leased. So we normally ride Tuesday, Wednesday, Thursday, Saturday, and Sunday. Dijon is leased Tuesday, Wednesday and Sunday. I could go on Mondays and Fridays, but Shasta is leased those days so I’d be riding by myself. I also don’t really want Dijon ridden 7 days a week as he’s semi-retired. So I ride him Thursdays and Saturdays. This weekend I asked his Sunday leaser to switch to Saturday so we could go on a trail ride as I had to work on Saturday.

We trailered out to Calero County Park. Dijon just walks right on the trailer, stands politely while you put the bar up and then doesn’t paw or freak out. He just behaves. Compared to Nilla and Shasta, he’s such a joy to trailer. We got to the park and there were 7 other horse trailers. Luckily, they have a huge field for parking in so it wasn’t a big deal. Most of the places we go can’t handle more than 1 trailer, so this was really nice.

We headed out towards the reservoir first. It was quite low and there were birds of death. Shasta has always had a thing about white egrets and there were 8 or so of them down on the shore. Some people were walking the shore and the birds took off. Luckily the trail is pretty far off the water because of the drought so Shasta just eyed them wildly but didn’t actually freak out.

Pretty scenery, right? Unfortunately, this whole green area to the right should be covered in water and the water line is about 20 feet up. Here’s an illustration.

Anyway, we started going uphill after reaching the reservoir and climbed more than I would have liked. Given Dijon’s previous injuries, hills aren’t the best idea for him. We walked the entire ride, which Shasta found very boring… and Dijon found very boring… but it was for the best. Here’s the elevation and speed chart:

Once we started heading down, we hit some shade from all the California Oaks growing by the creek. Luckily, it wasn’t too hot today, but this park was mostly in the sun so we won’t be back until next fall. This park used to be a cattle ranch and we found an abandoned corral down at one of the trail junctions. 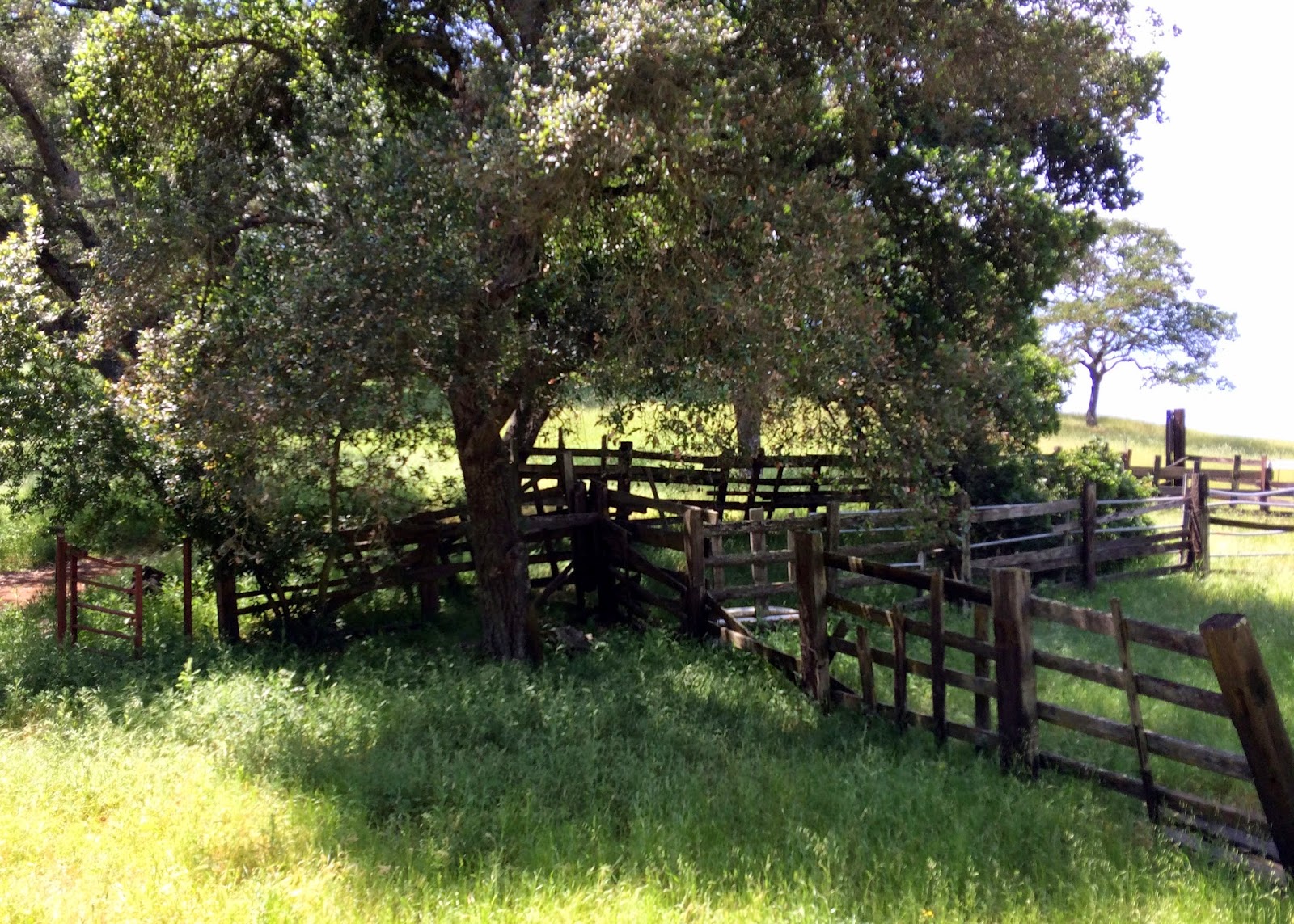 It was really pretty riding down in the trees. 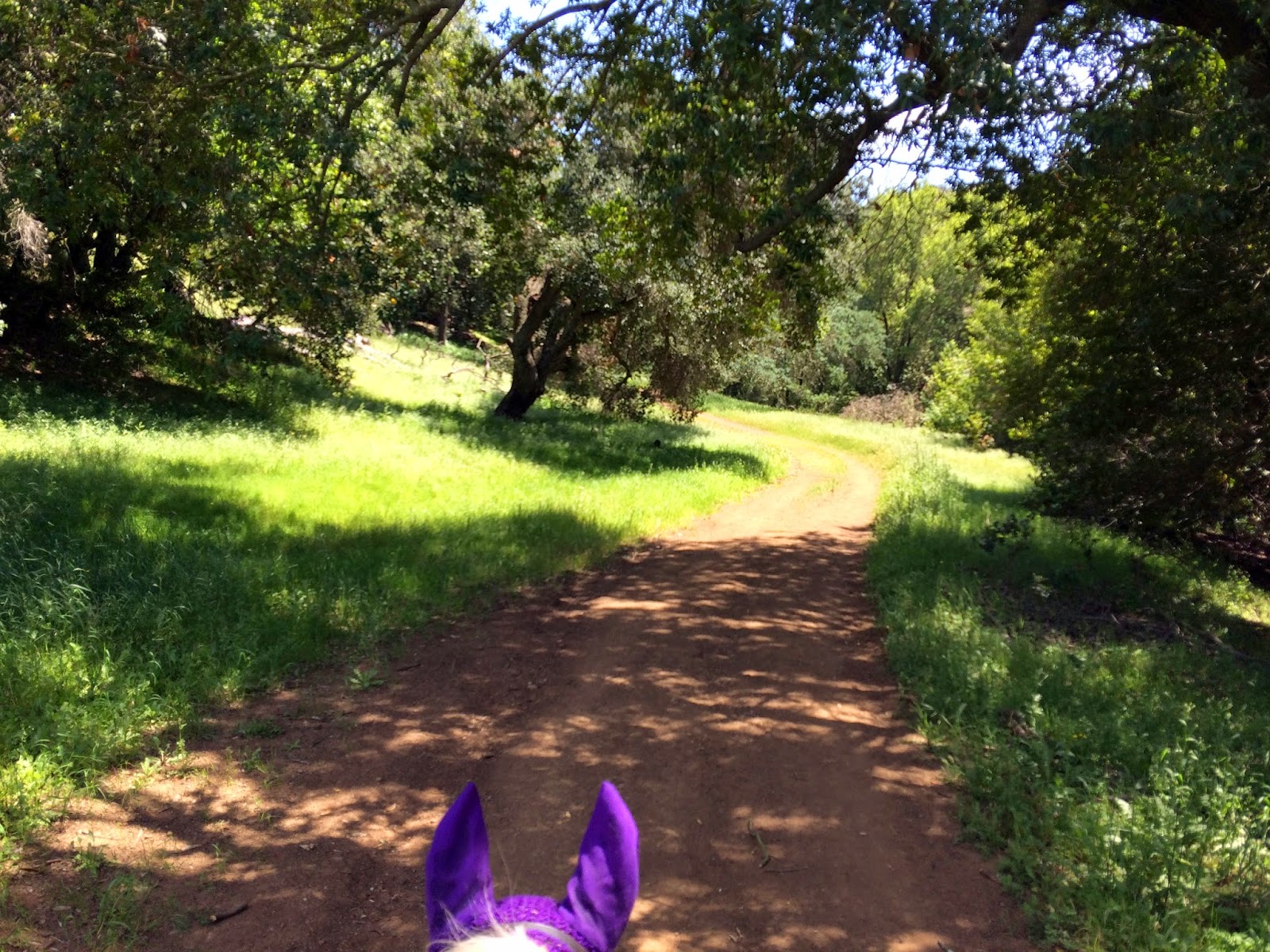 We stopped in a shady spot to let the poor, starving beasts eat some grass. 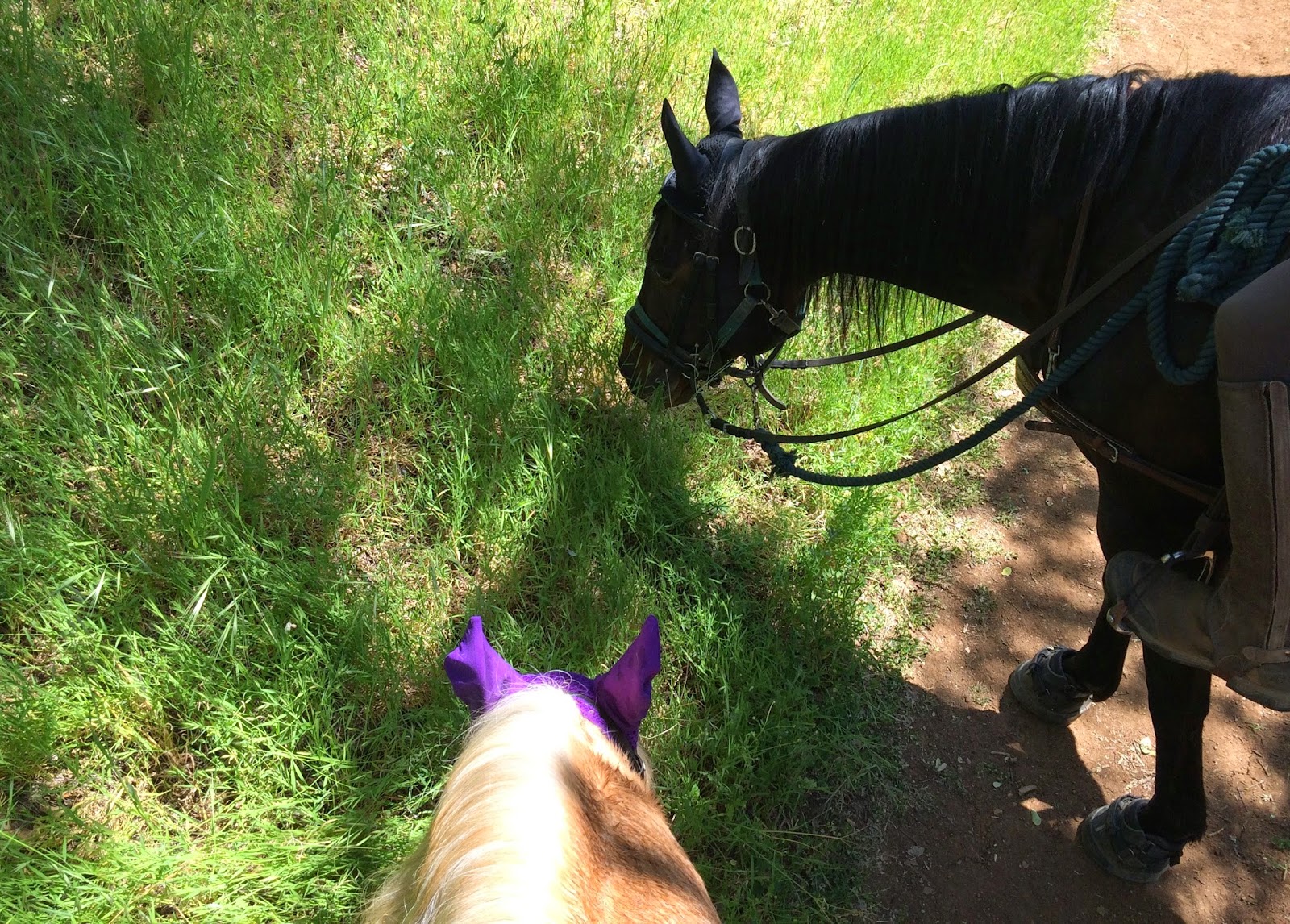 And also posed for some pictures before heading back out into the sun to finish the ride. 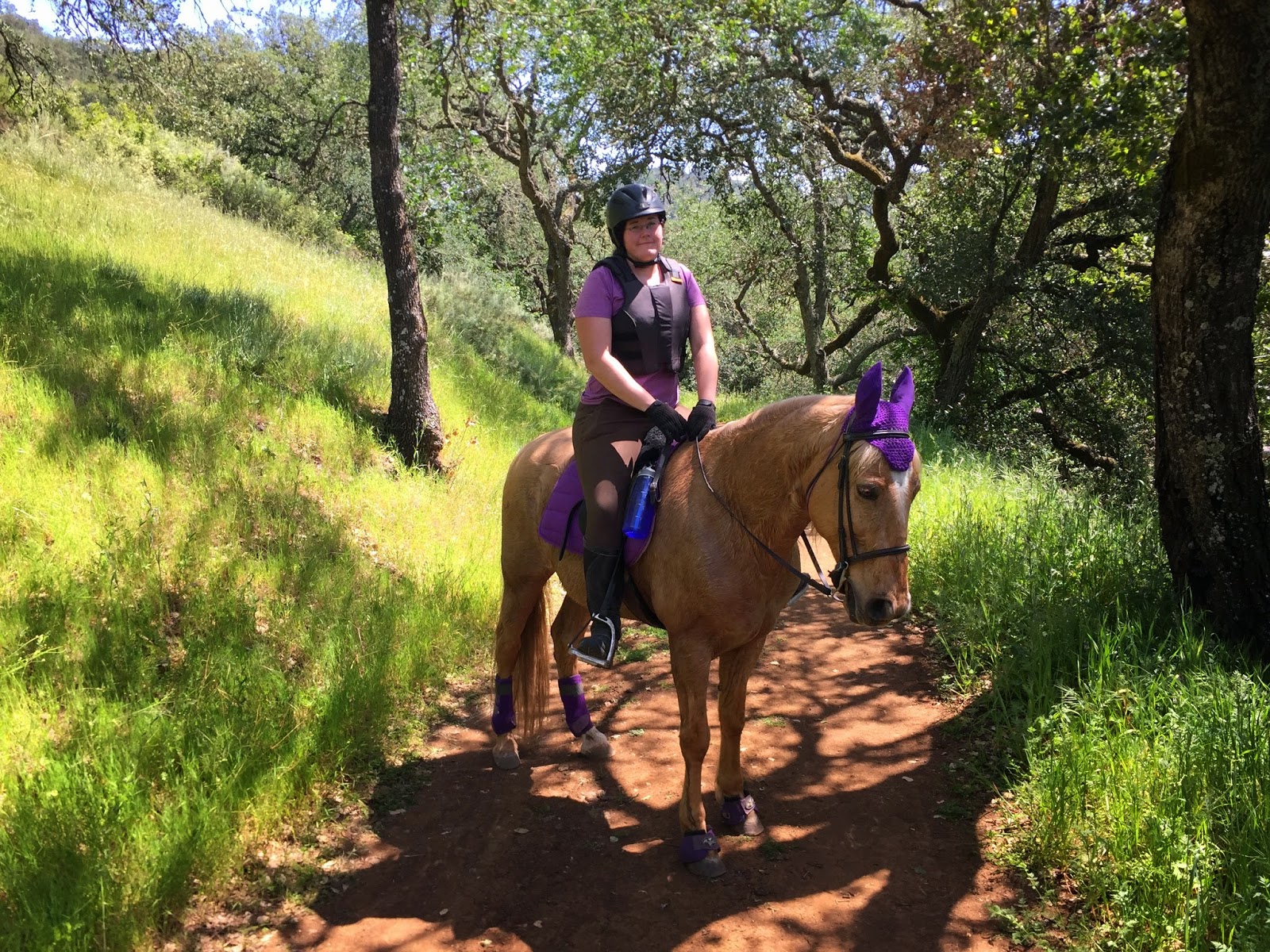 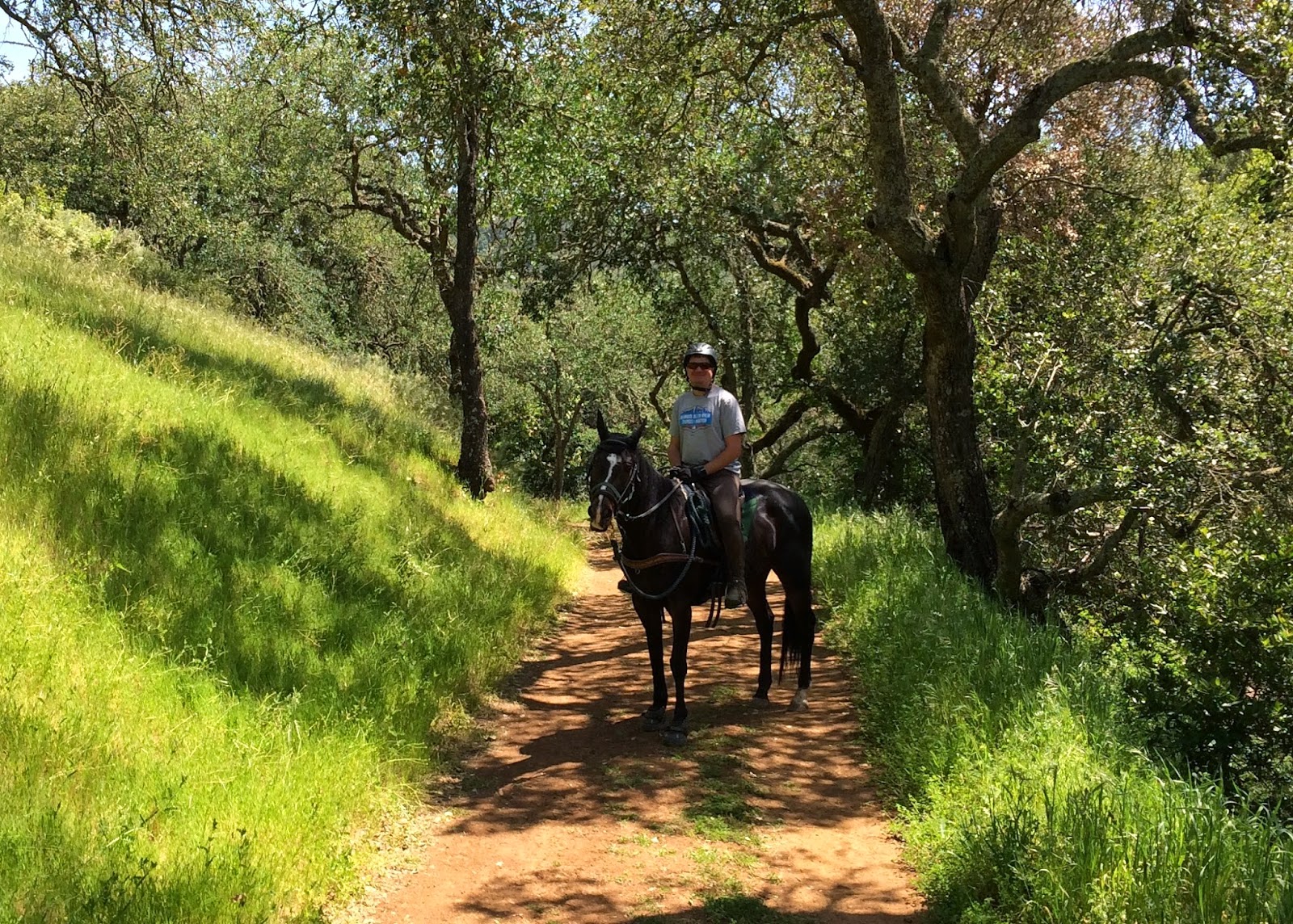 We crossed paths we two riders heading out on the same trail we were coming back on and then returned to the parking lot to find only our trailer and theirs. All the other horse riders had taken off while we were out. I’m sure it would be nice to ride before the absolute peak of the sun and heat, but I really hate getting up early so whatever.

Back at the trailer, we pulled their tack and I found huge dry spots under Dijon’s saddle. I’ve been using this saddle for the (almost) 4 years I’ve had him and I’ve never seen pressure spots like this. It’s always fit really well. I feel terrible since we did a pretty long ride for him, and his back was probably not happy the whole way. I’ve ridden him in this saddle recently too so I can’t believe his back has changed so much. I really can’t deal with shopping for 2 saddles at the same time. I’m going to try my husband’s treeless next time I ride him and see if that works. I could also put the stirrups from my western saddle back on and use that, though I am guessing that if my english saddle suddenly doesn’t fit, my western won’t either.