I have been wanting to go to an event here for a long time. It’s such a well-themed equestrian park with all the castle and dragon decorations. I was so excited to be there, I basically spent the entire weekend with this song in my head.

I almost didn’t get to go to this show. My husband made plans to go backpacking and was going to be away for this weekend. Since I don’t have a trainer or barn to go to shows with, I don’t want to go to something all by myself. I worry that if I were to have an accident – I know I’d be taken care of/sent to the ER – no one would be around to take care of Nilla. After much complaining, my husband decided to come out of the wilderness a day early so that he could join me at the show.

I just deleted an entire paragraph on how exhausting my week was leading up to the show with the amount of prep/packing work I had to do, but let’s skip ahead to Friday. Camelot is 3.5 hours from my house without a trailer. I figured it’d take me 4.5-5 hours to get there depending on traffic. Thankfully I managed to avoid almost all traffic and get there around 2:30. Then I spent forever trying to park the trailer (I suck at this), left the mule screaming for her boyfriend and spinning in her paddock, and drove back to Sacramento to pick up my husband. At this point, a power line had fallen across the road and the road was blocked while PG&E fixed it so the trip ended up taking 2 hours instead of 1.5. I picked my husband up at 5:30 and we immediately turned around to drive back to Camelot – another 1.5 hours on the road plus a stop for fast food dinner. My husband’s friend thanked me for picking him up at Sacramento and I was like, “eh, what’s 9 hours of driving in one day for a horse show.”

We got back to the horse park after 7 and I quickly tacked up the mule to school before it got dark. The HT allowed schooling of the whole XC course. I wanted to take her out to see if there was anything spooky, but I didn’t want to jump everything. Nilla has bad hocks on a good day and since I took her off Previcox because of her ulcers, they’ve been getting worse. So I try to jump her as little as possible. I was really glad we went out to school though. Nilla had quite the attitude at first and was landing with much porpoising. 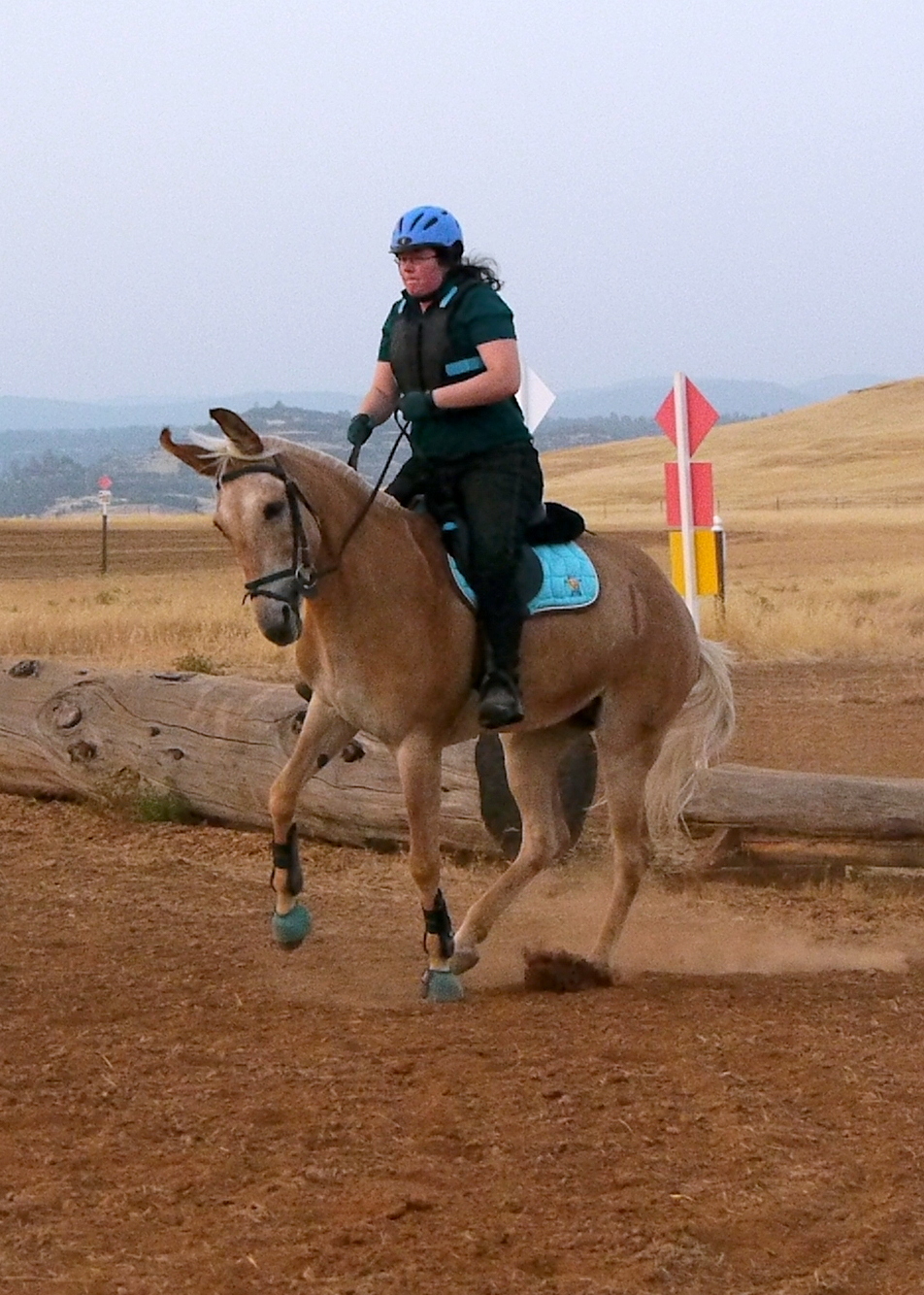 We did two jumps and then got to the water. For intro, the water was #10 and it was only flagged for entering and going through the water, no jumps associated. Easy, right? Well, Nilla has never schooled XC water before. And, while she will cross creeks, she’s not a huge fan of water. She slammed on the brakes and refused to enter. I tried patient waiting. She just stood at the edge drinking the water. I tried kicking. She tried spinning. I really wished I had Eugene to lead her through. I eventually walked her in to a different spot where the distance to the dry land was much shorter and she crossed. Then we went back and did it again from the flagged spot. I even let her stand in the middle and eat grass to get her to associate the water with being a good place. She wouldn’t canter through, but I did finally get her to trot through the water and called it good. 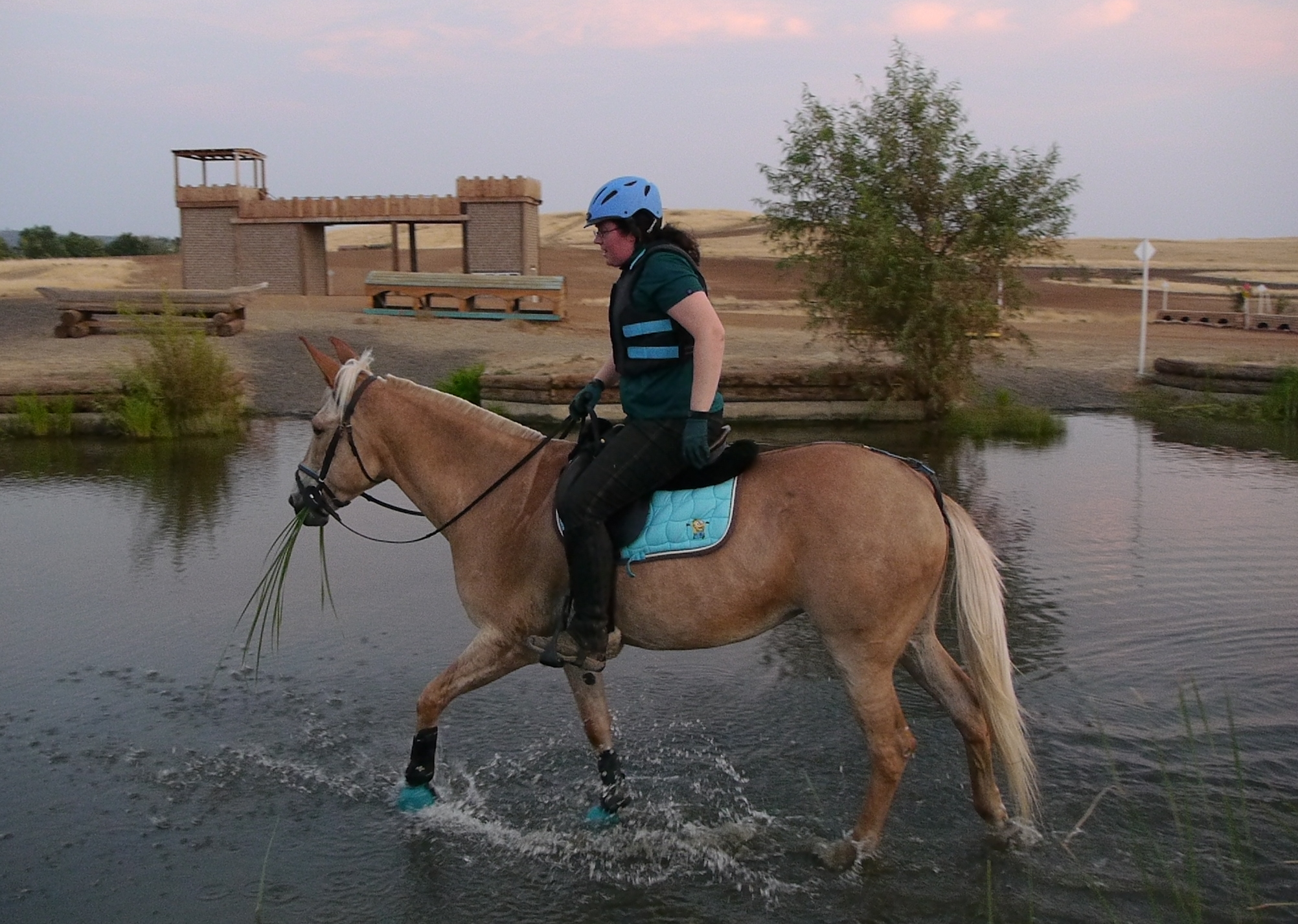 The sun was already set behind the hills at this point and we were going by the rapidly fading lingering light of evening. I did one last jump because it was huge (compared to all the other intro jumps, not compared to real XC jumps). You can see just how dark it was getting in this shot. 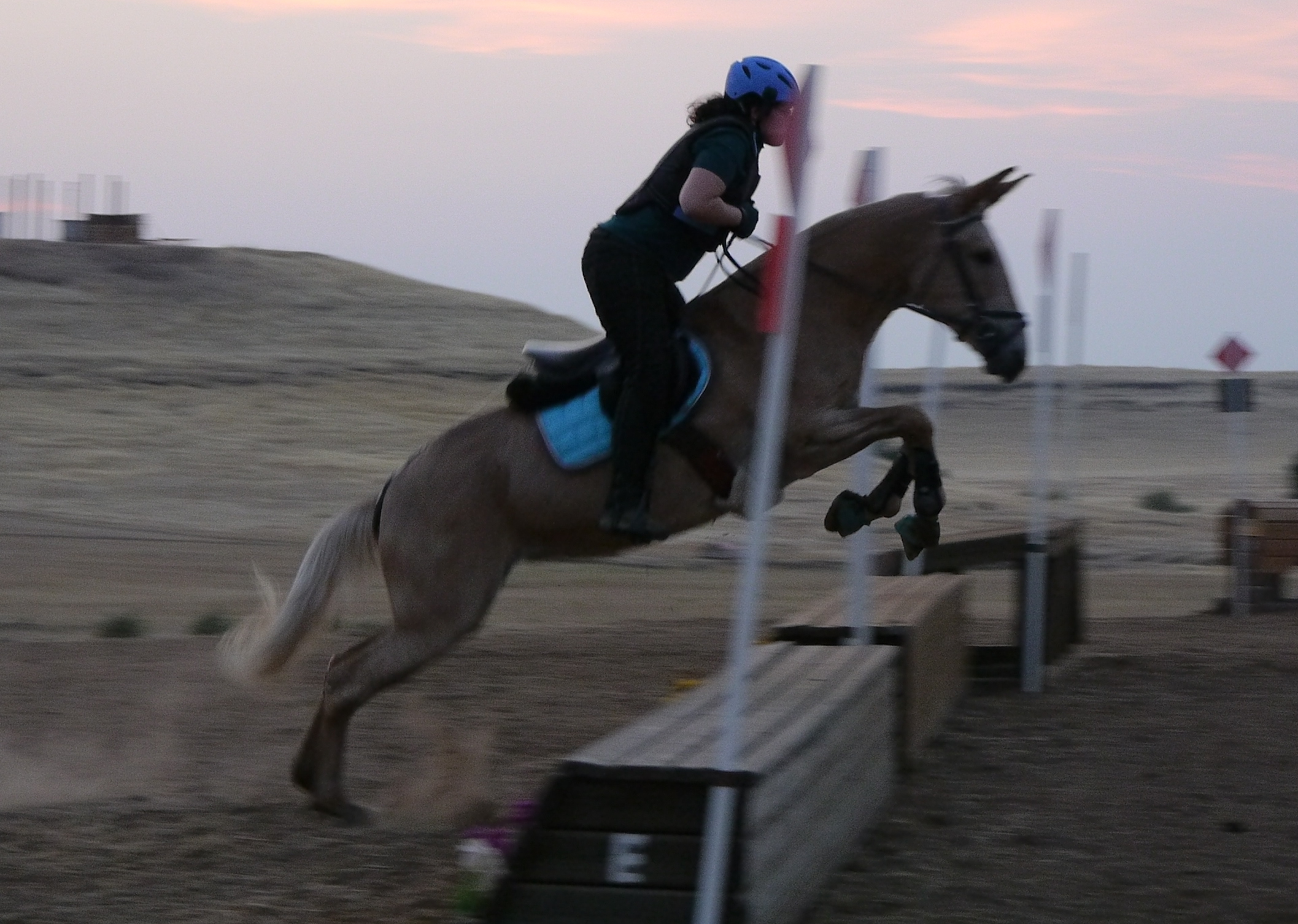 By the time we got back from schooling, other horses had arrived and were stabled near Nilla. She was still upset to be in a separate stall (she was stabled in a lone stallion stall so not touching the other horses) and still upset not to have Eugene, but at least other horses were nearby and she could settle down a bit. She decided to lay down and eat her hay from there. I couldn’t get a great shot because it was dark and she’d blink at the flash, but here you go: 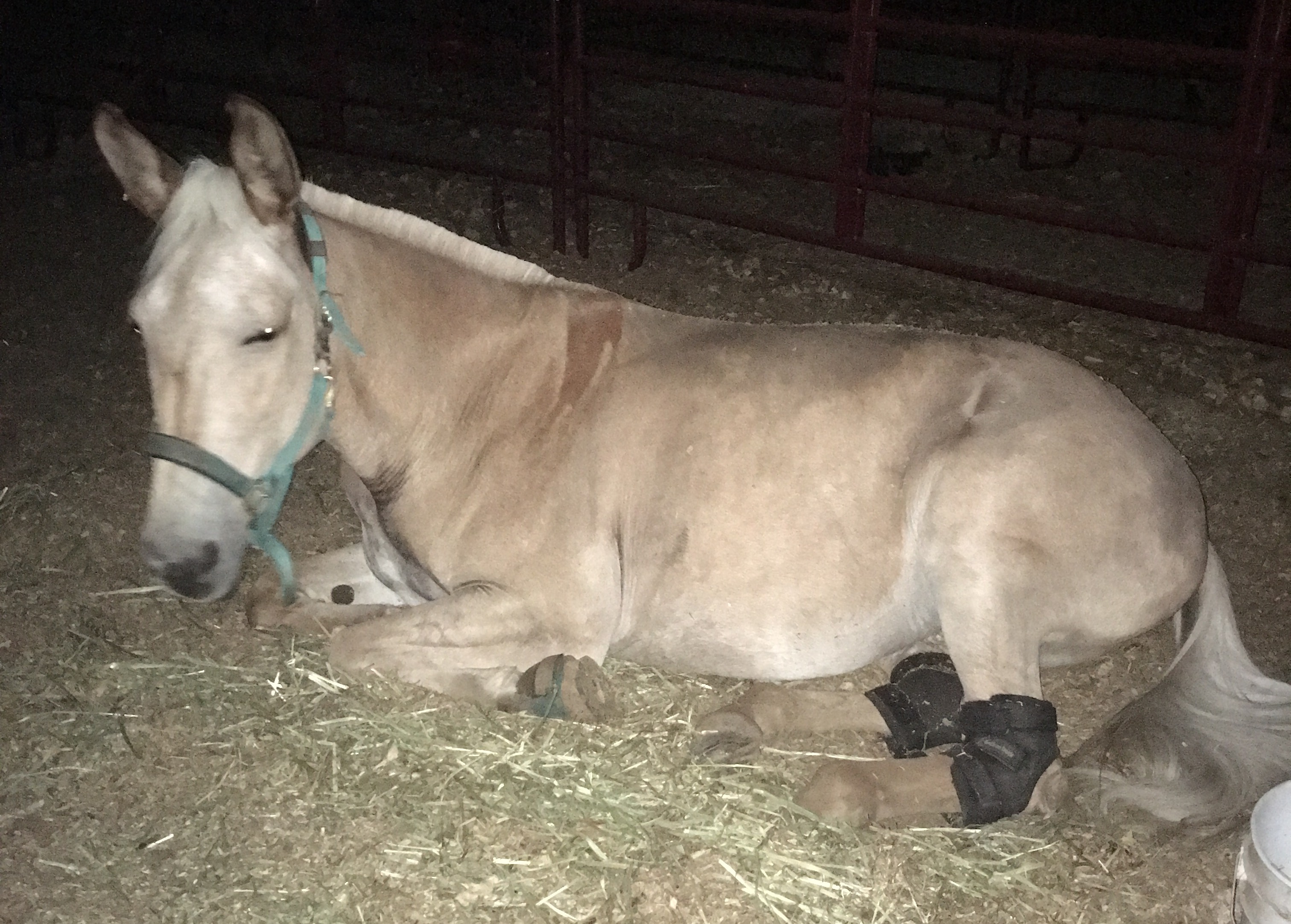 On Saturday, my dressage time wasn’t until 12:25, which was really unfortunate as it was boiling hot. I really thought I might have heat stroke. Because of the heat, I waited to warm up until 11:50 and Nilla was nice and sluggish. She was being really good: calm, relaxed, not jigging or leaping into canter instead of trot. She was responsive and easy, so I practiced transitions and halts on the serpentine, did a few circles and then just took her over to stand near the dressage court to watch the competitors in front of me.

My husband had been guilted into volunteering to jump judge so he wasn’t with me during warm up, I didn’t have my phone, and I couldn’t remember if BN A crossed from HXF or H to B. (It’s HXF.) In BN B there is a shorter diagonal crossing and I had done that test last so I was mixing things up in my mind. There is a 2 foot bank wall separating the warm-up area from the dressage test courts. It’s made out of cinder blocks or something. I should have gone back to take a picture, but forgot. I had parked Nilla in front of the bank and she was eating weeds from the top of it since they were now at face-height. I was watching one of the people before me do their test to see where to make change of direction and wasn’t really paying attention to Nilla. Ad she just jumped the bank. From a standstill. The ring attendant was laughing and saying how mules are good at that. And I was like, yeah, I guess, but I wasn’t expecting it.

It was finally my turn for dressage. We walked around the edge of the court and Nilla spooked at the judge’s booth. It was a pretty cool booth: built to look like a castle. Nilla didn’t think it was as cool as I did. 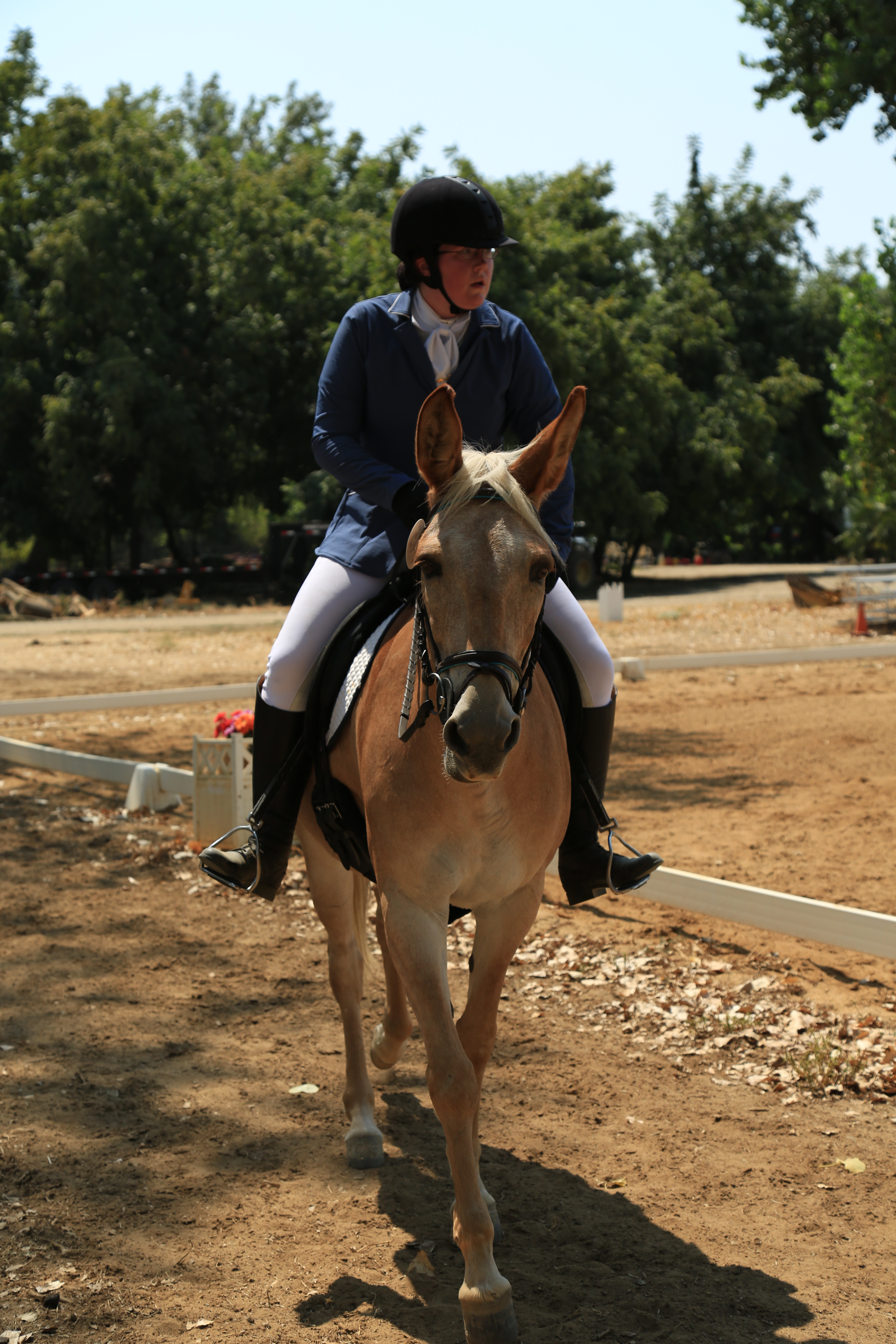 We got our bell and headed on in. I think the test was okay. It was certainly better than the last dressage test we did. Nilla was quiet and not trying to yank the reins out of my hands. We weren’t very collected or on the bit though. 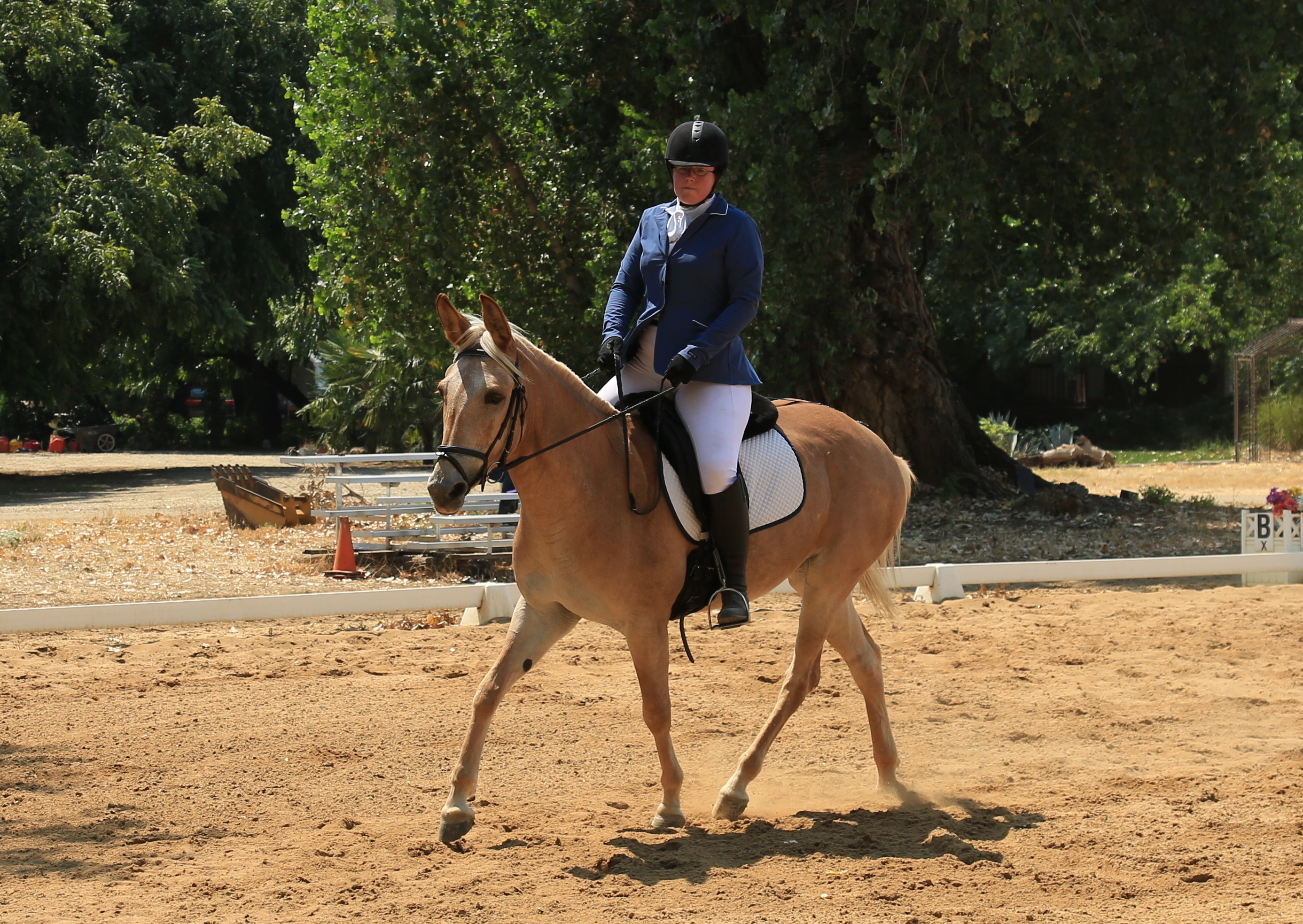 As we were starting our first circle at E I realized that I need to start marking out a dressage court at home and actually riding correct circles. I was bent too much like for a smaller 10m circle. In order to fix that, I had to push her back out. In the end, my circle was more of an oval and a lumpy oval at that.

My canter circle wasn’t much better and we were definitely a good meter off the rail, but for Nilla, getting her to canter at all is so difficult, I really spend the whole time just trying to hold her together and keep her from breaking. I also try to quietly cluck to her. I know it’s not allowed, but I take my chances hoping the judge won’t hear me and knowing the 2 points I’d lose for clucking are probably less than how bad my score would be for breaking from canter. 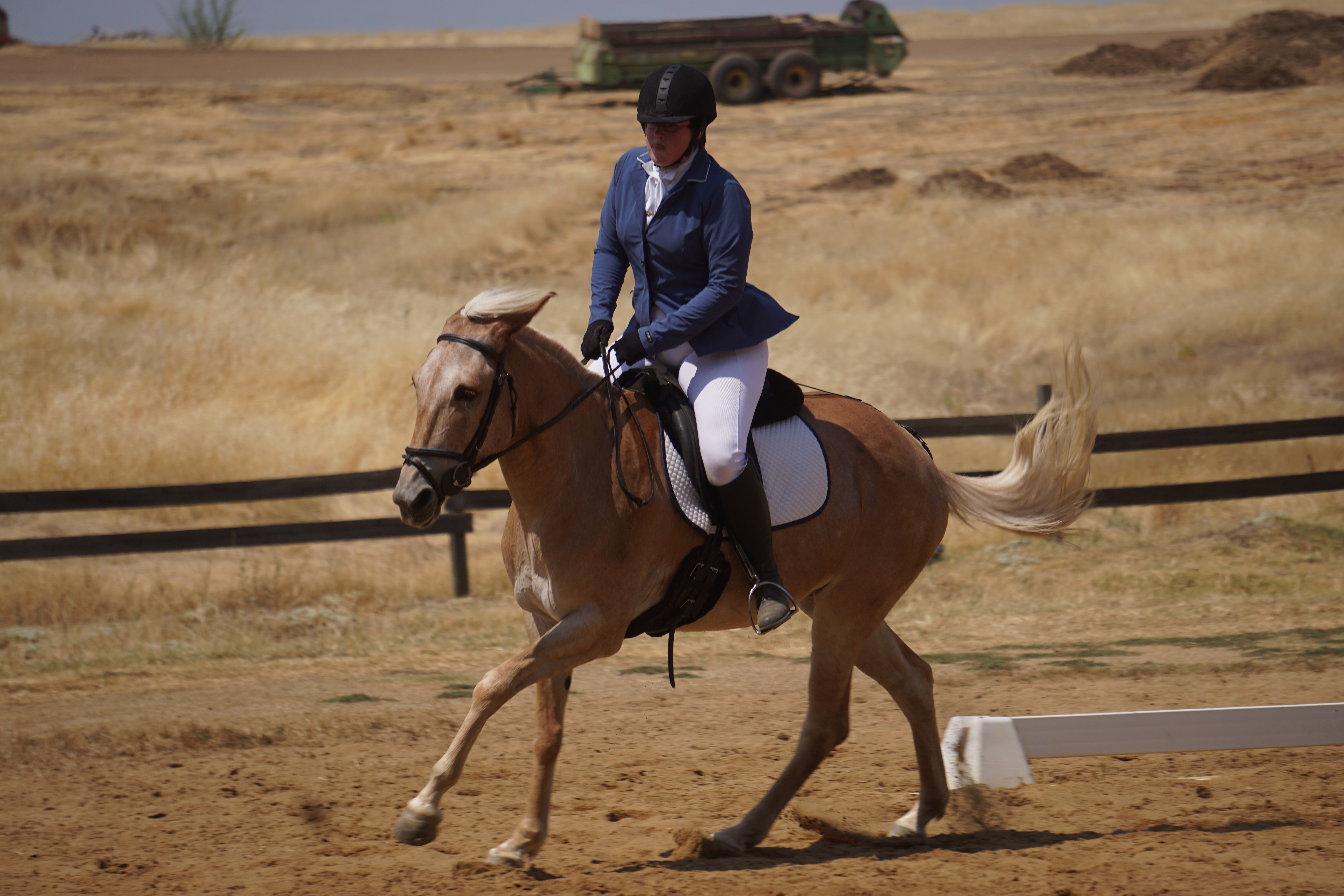 Our free walk was really disappointing. In warm-up, she was actually lowering her head and stretching out. In the test, she just plodded along with her head up. Too distracted I guess. While I don’t have high expectations of canter, I do actually know that she can do a better free walk, so it was annoying to only get a 5 here. Especially as that’s the x2 coefficient for the test. She did look really cute in her working walk though. 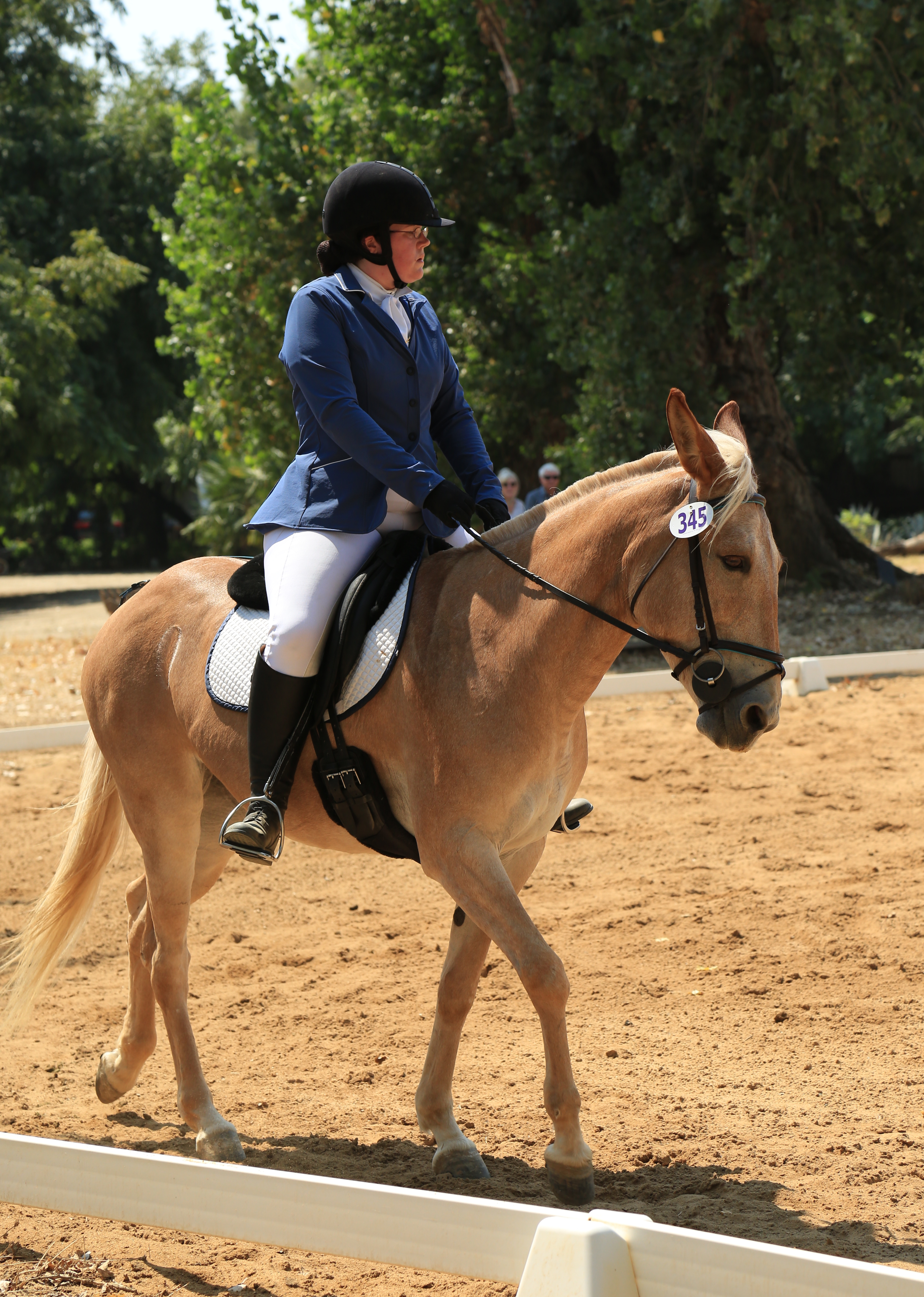 Trot work in the other direction had the same geometry issues, but I felt like she was going well and feeling good. 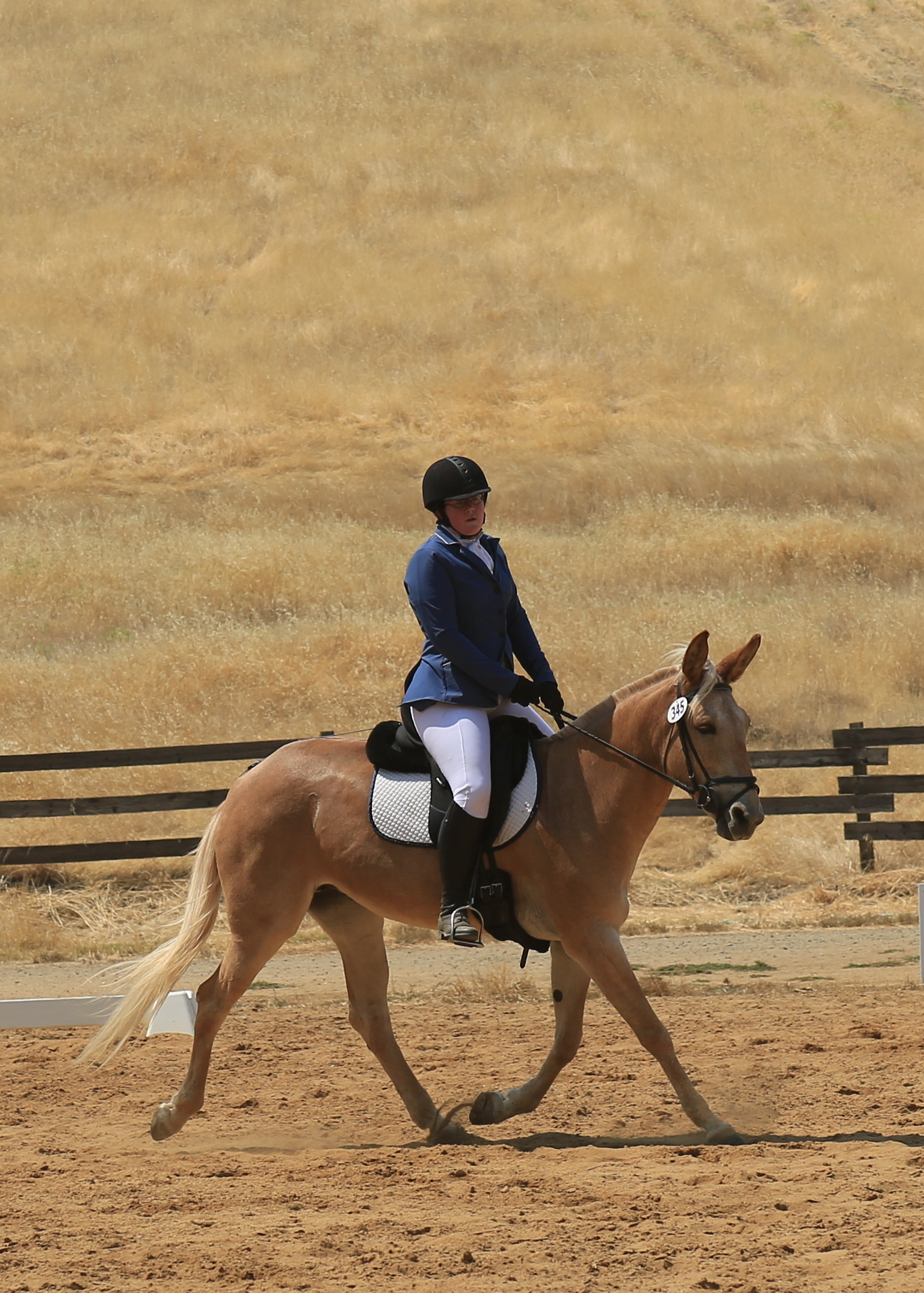 Our canter in the next direction felt even worse. Right lead is definitely not our friend and this circle is done up at C by the judge. 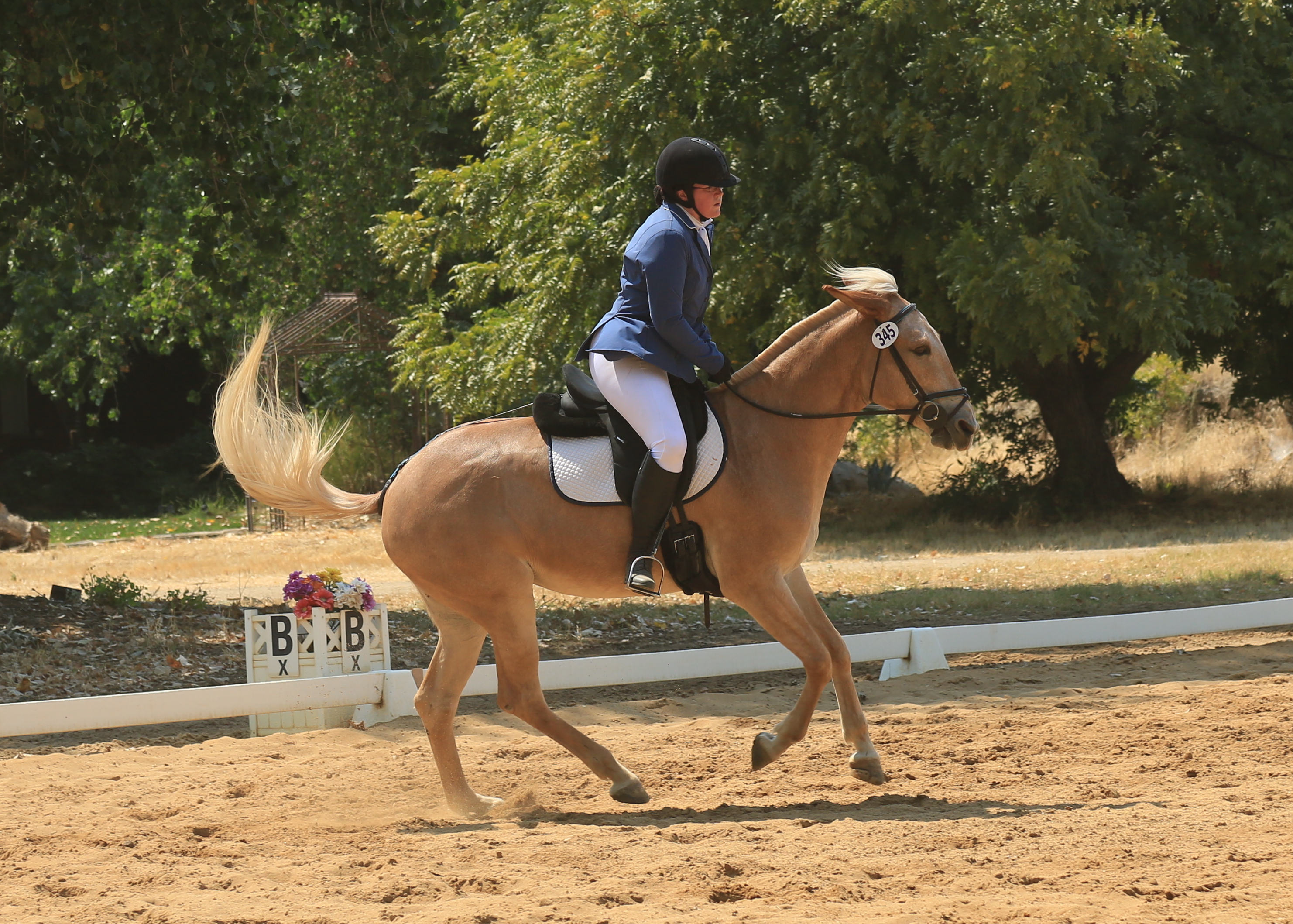 Thankfully, the test was almost over. All we had to do was halt. In warm up, her halts were great. I think it was so freaking hot, she was like, “yeah, halting sounds good, let’s do that.” In the test we had this: 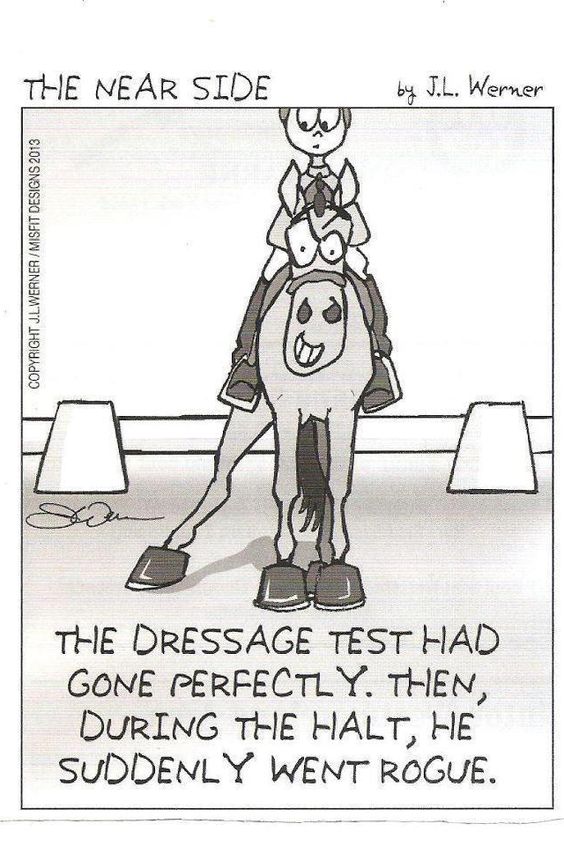 On the plus side, we had no comments about tongue. That’s not to say it wasn’t still present, but this was the most that was seen: 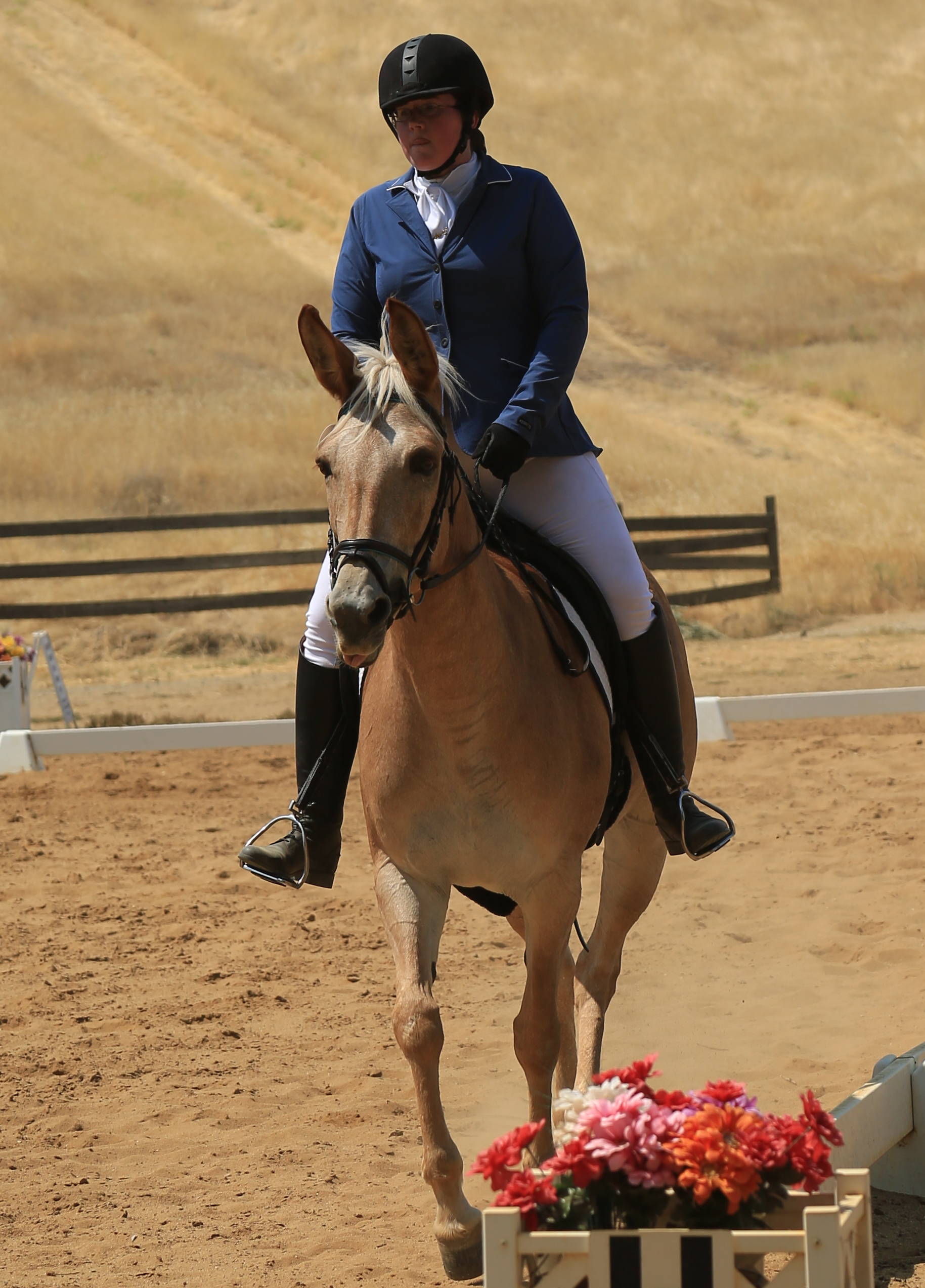 At least they don’t deduct points for rider tongue

We ended up with a 37.9, which I thought was completely fair, but still kinda sucky. I’m probably too hard on myself, but I can’t help feeling like we should be able to do better than this. 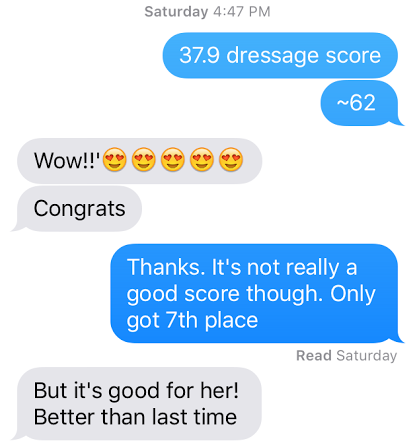 Texts with my trainer

Thankfully, the judge was pretty tough on everyone in my division. The best score was a 34.2 so we were within one rail of the leader. We were tied for 7th going into XC.

** All pictures from dressage were used either by purchase or with permission.