We paid some girls who were fundraising for their trip to Rebecca to clean and feed the ponies in the mornings. My husband also paid some pony club kids to clean his tack – they were fundraising for camp. We’re always happy to support kids working towards goals and it was nice not to have to clean or worry about the ponies being hungry before we could get there. Although our earliest time was 10am, we still got to Camelot early to braid. My husband braided Eugene and I did Levi. Unfortunately, despite a special sweet itch sheet that he wears all the time, lots of supplements, and allergy medications, Levi is still itching his mane out. The lower half is incredibly thin and getting worse by the day. I managed to get a french braid in, but I’m not sure if I can keep this up.

Although my husband didn’t ride until 24 minutes after me, we tacked up and got on together. We started out warming up in the larger warm-up and it was deserted. The management wanted everyone to warm up there and just send 2 people per arena over to the little warm up space next to the dressage courts. Unfortunately, no one was listening to them and that arena was packed. By I enjoyed having the big arena mostly to ourselves. There was one woman standing there who called me aside to tell me that I couldn’t wear my air vest because the rules state you must wear a cross country vest underneath an air vest. And I was like, but I’m not jumping; I’m doing dressage. I’m fairly sure I can wear whatever the hell I want (abiding by the usual jacket and helmet and light pants, etc rules). She continued to argue with me telling me I could be eliminated. I wanted to ask who the hell she was. Like are you the TD? No? Then STFU. But I kept my mouth shut and I walked off. I saw her later in the other warm up instructing someone so I guess she’s a trainer.

We eventually walked over to the other warm up and I checked in. I was a few horses out so we did a bit of work with Kate instructing us, but not too much. Levi was being good and when he’s good, I try to not mess with him too much. Then it was time to go in. I lucked out by getting the arena directly next to the warm up. Levi’s happier if he’s not being separated from the herd and I thought he might be stupid if we got assigned to the far arena. 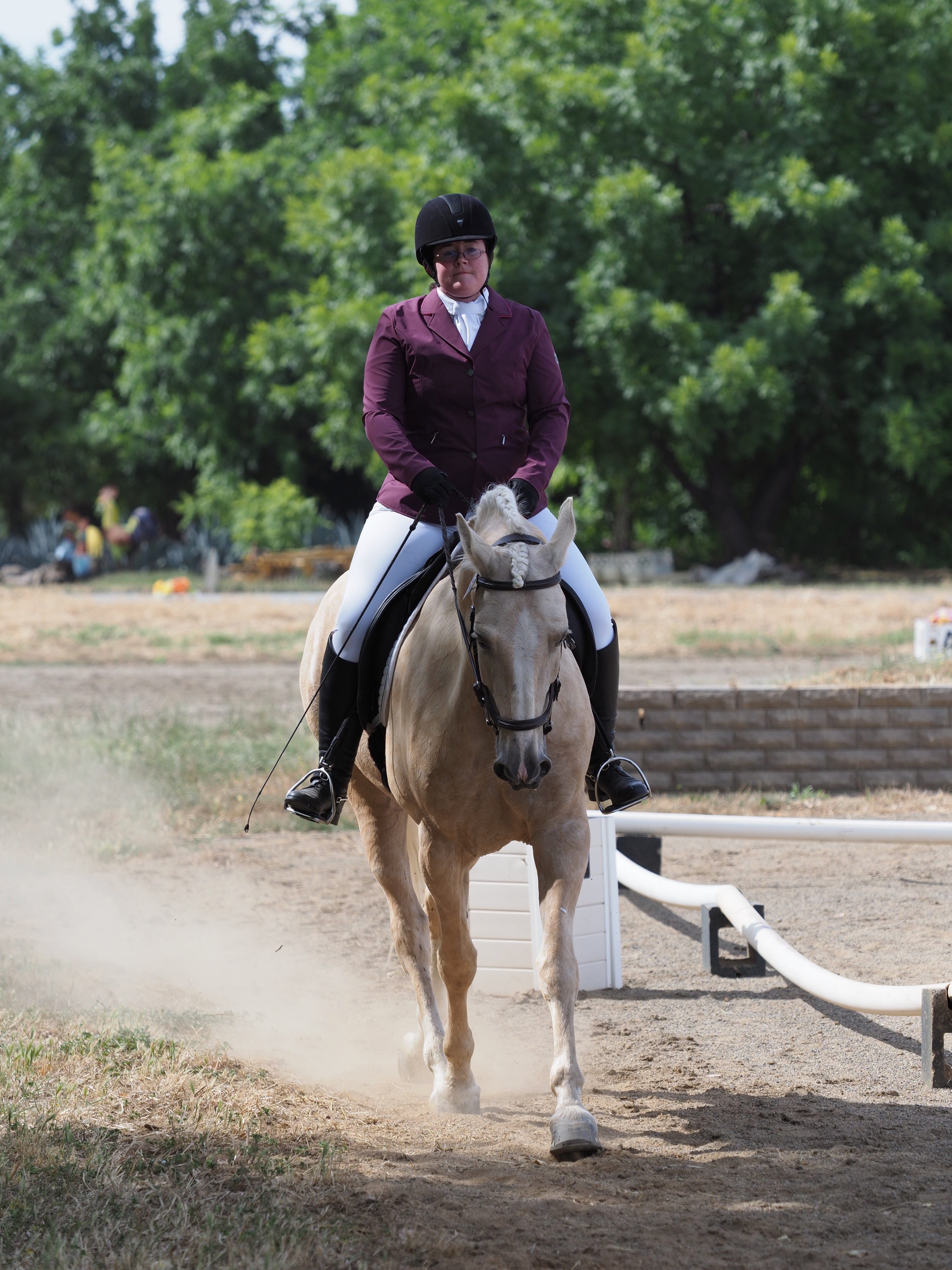 Levi was being so good I was actually smiling. 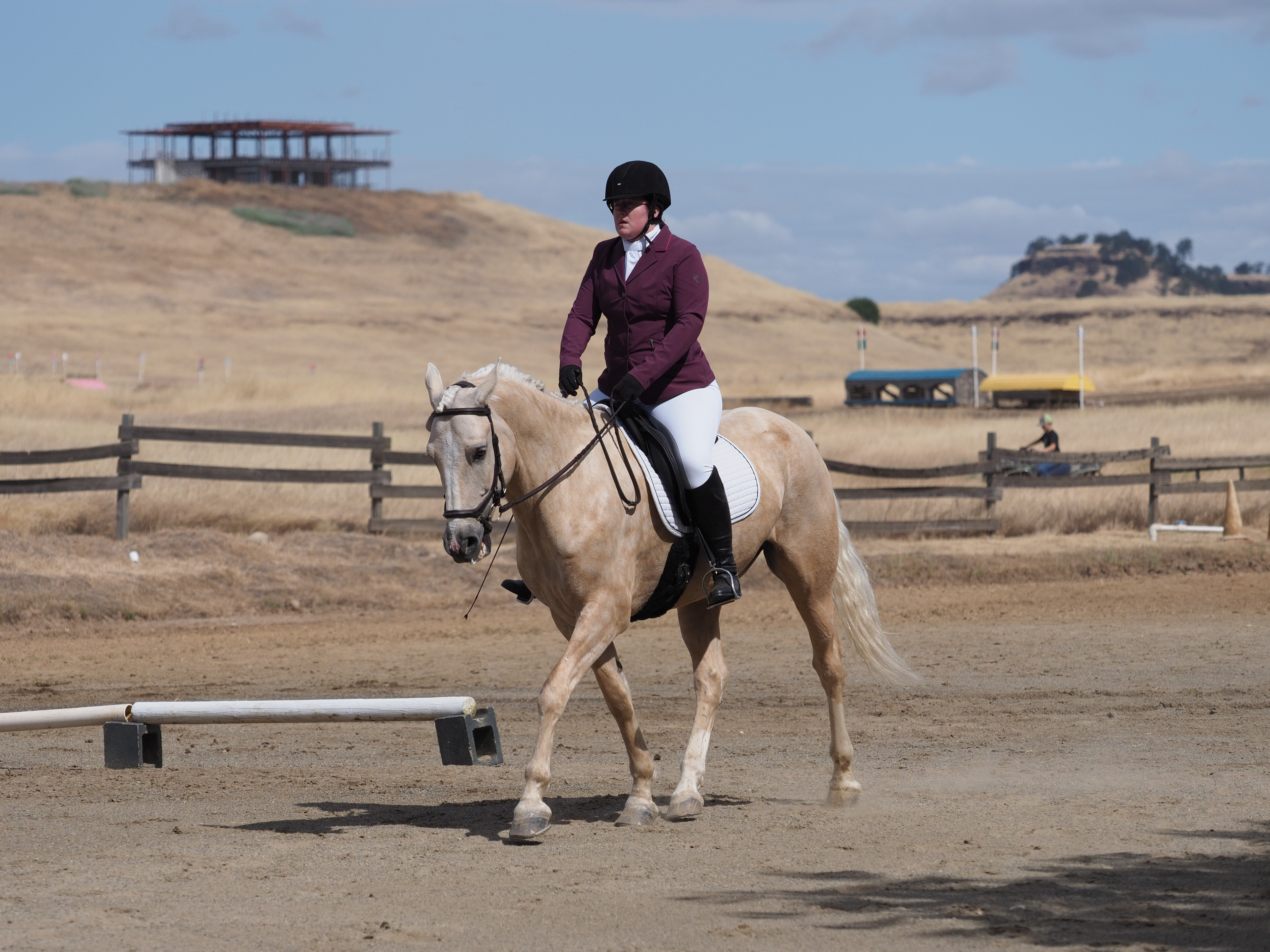 So Straight – not sure what my right elbow is doing though 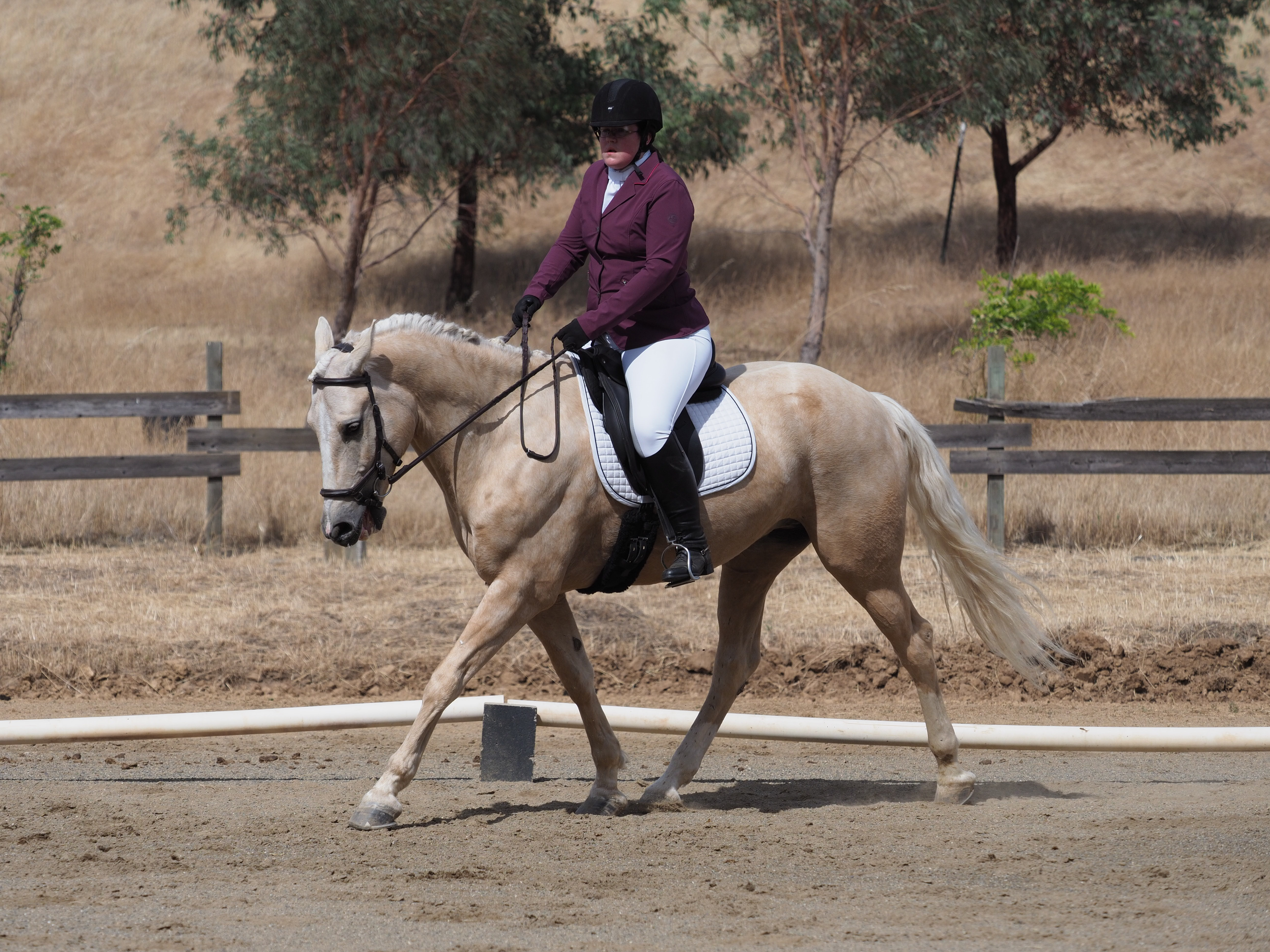 I like this word reluctant. It’s much nicer than pissy. 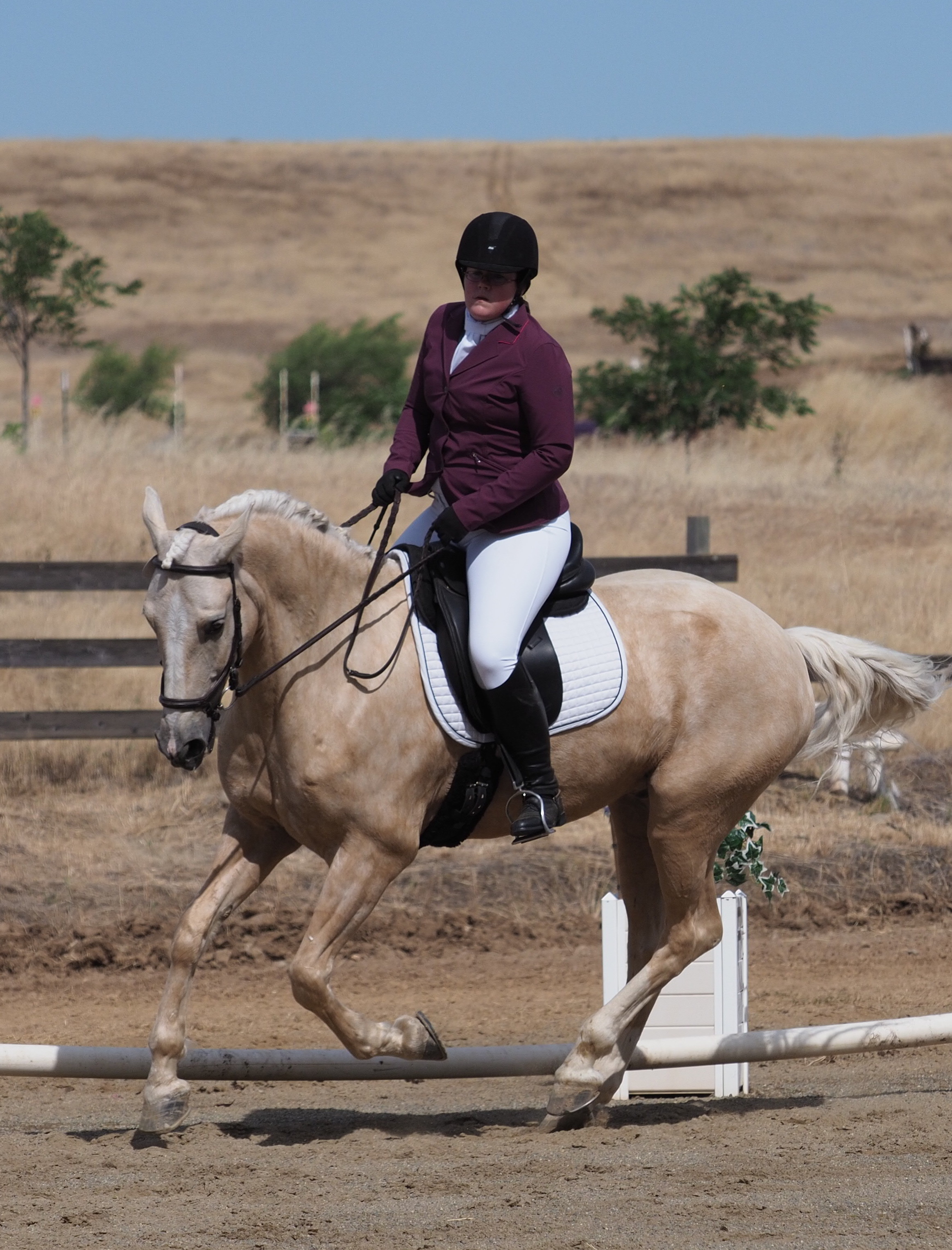 But he’s such a pretty boulder rolling downhill

5. Between F and B Working trot
Judge’s Comments: “obedient”
Score: 6.5 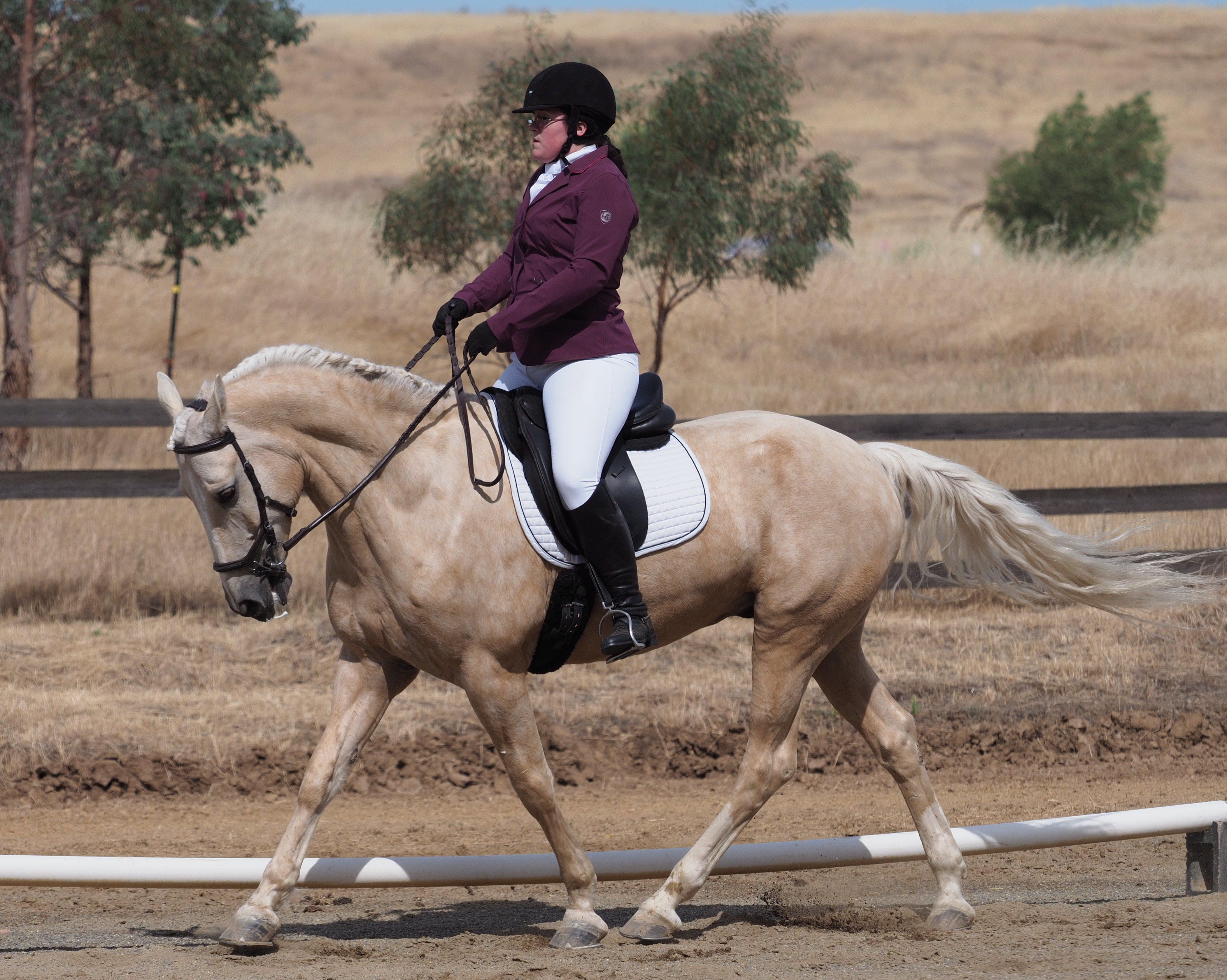 Hells yeah “obedient.” No idea with my right hands are doing. 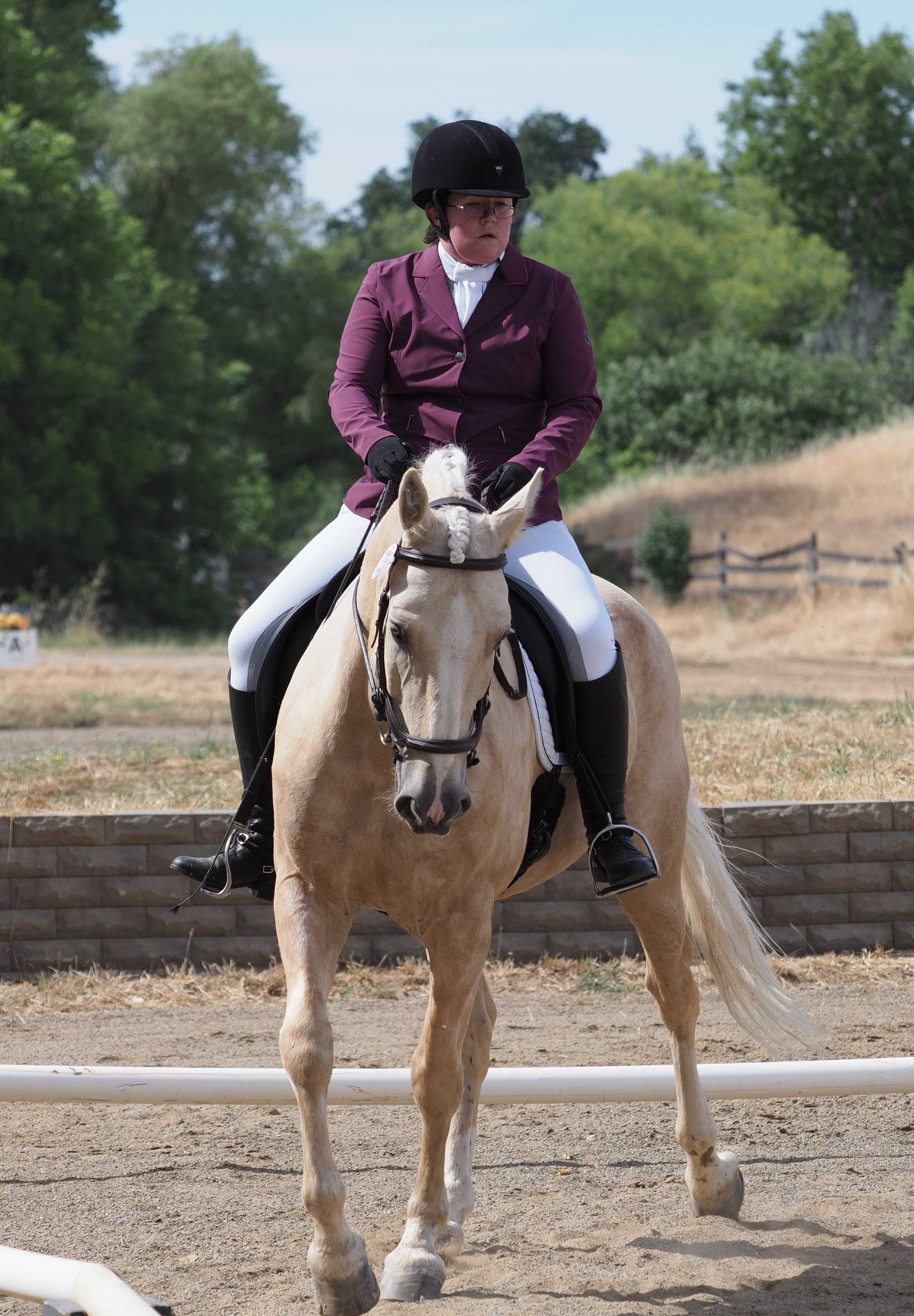 Does prettiness get you extra points? I think he’s working the system. 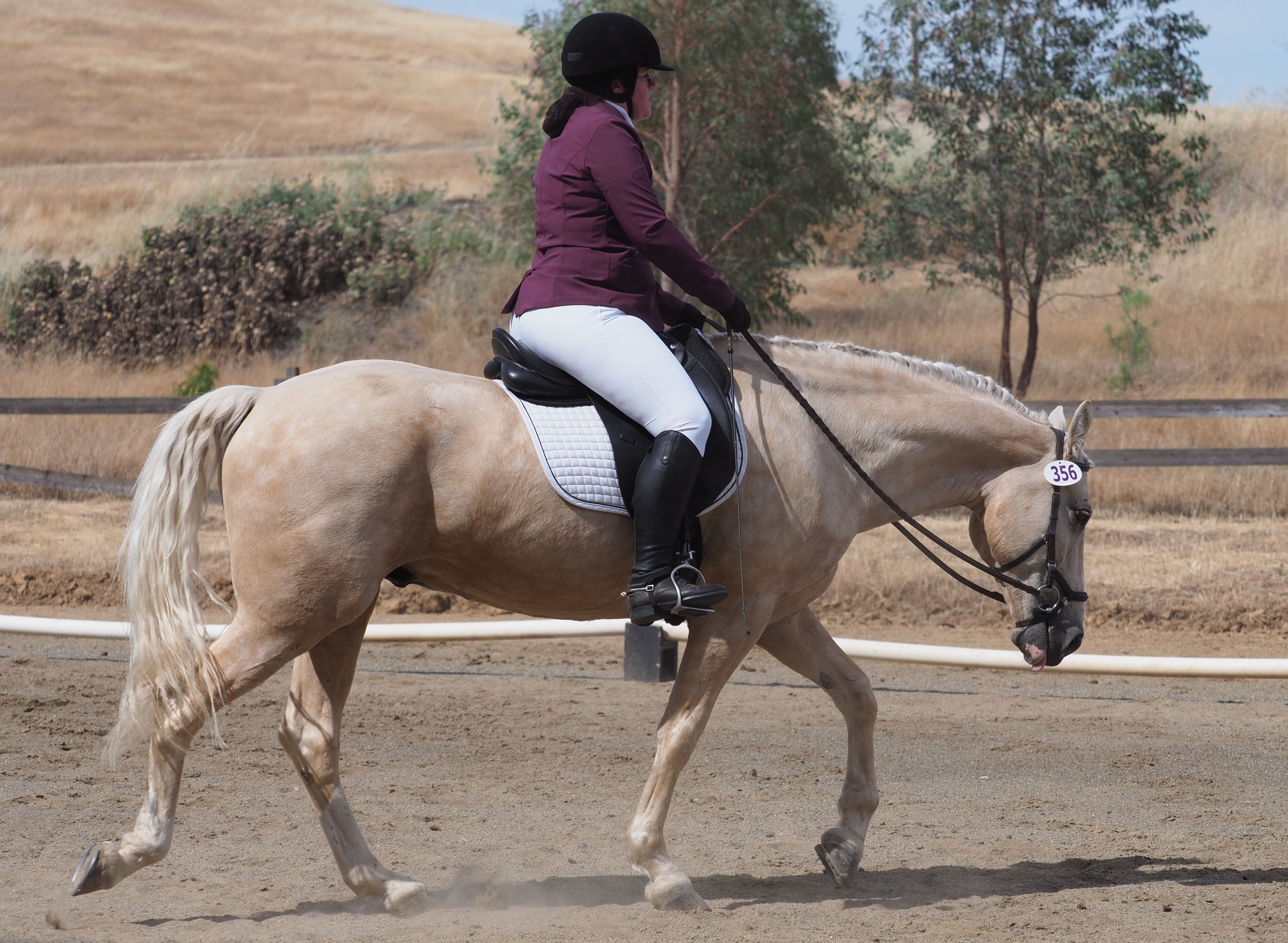 He sorta fakes the free walk – his head goes down, but there’s no reach in the body. 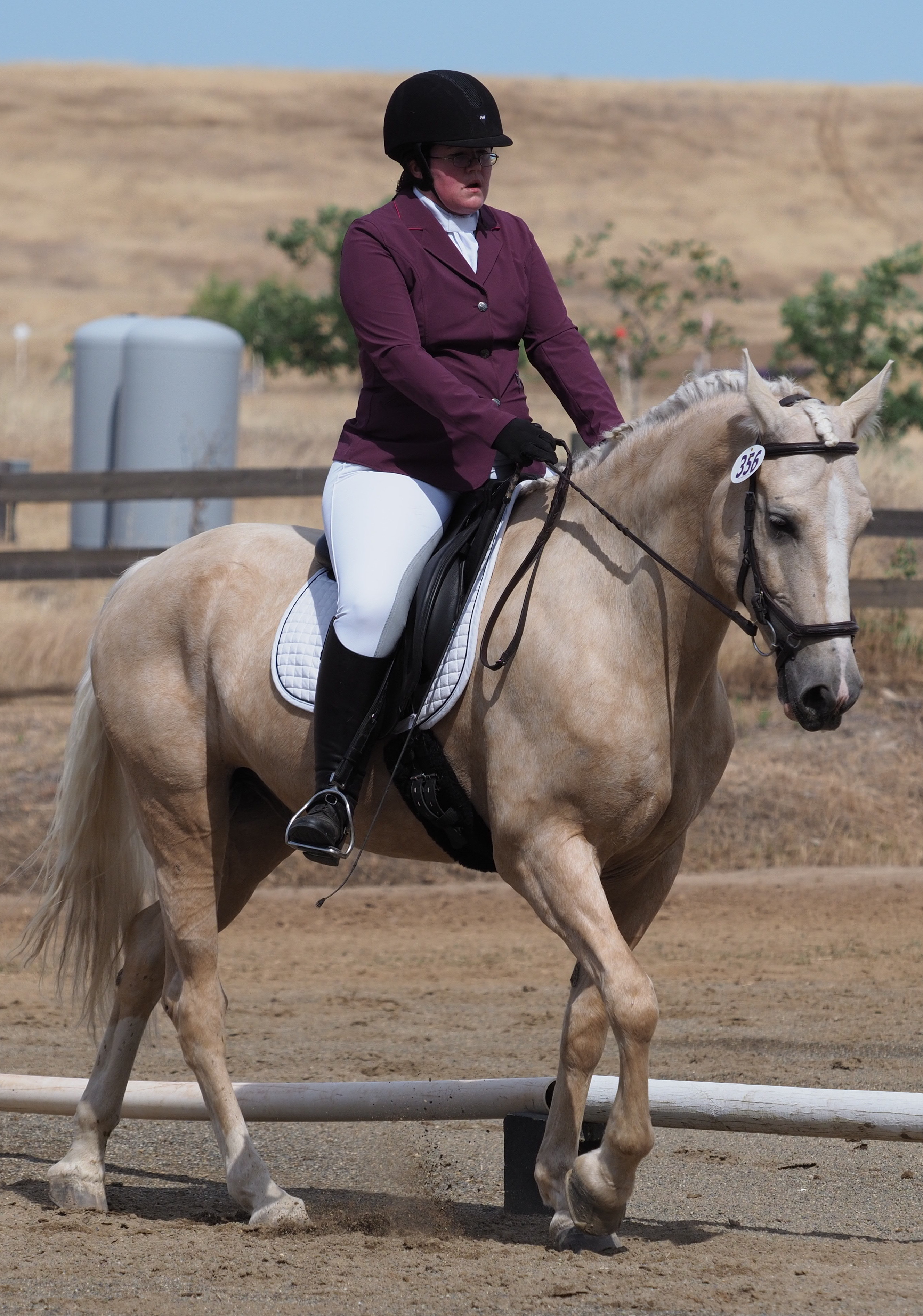 Just the day before he jigged in this transition 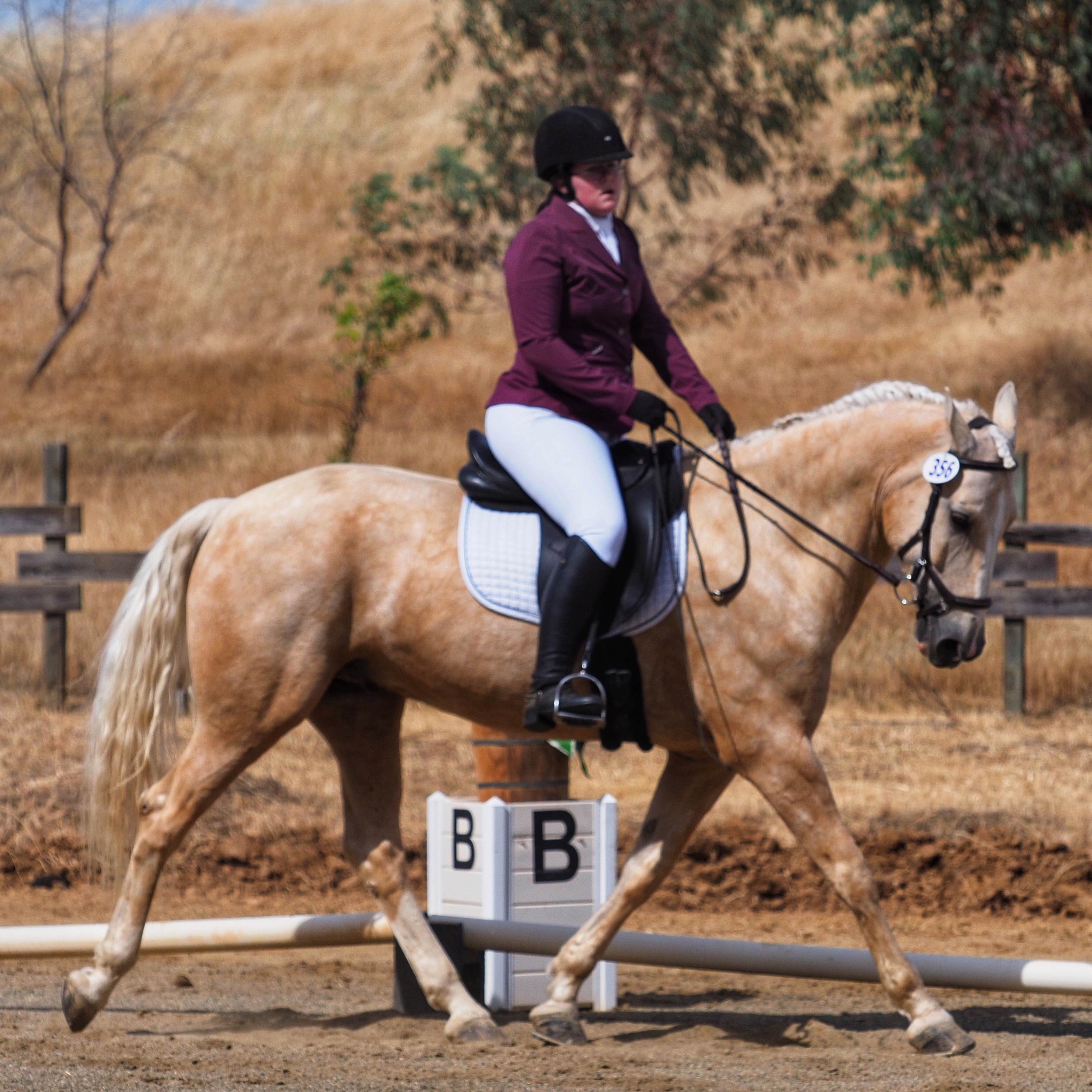 This was less fussy in the mouth than usual 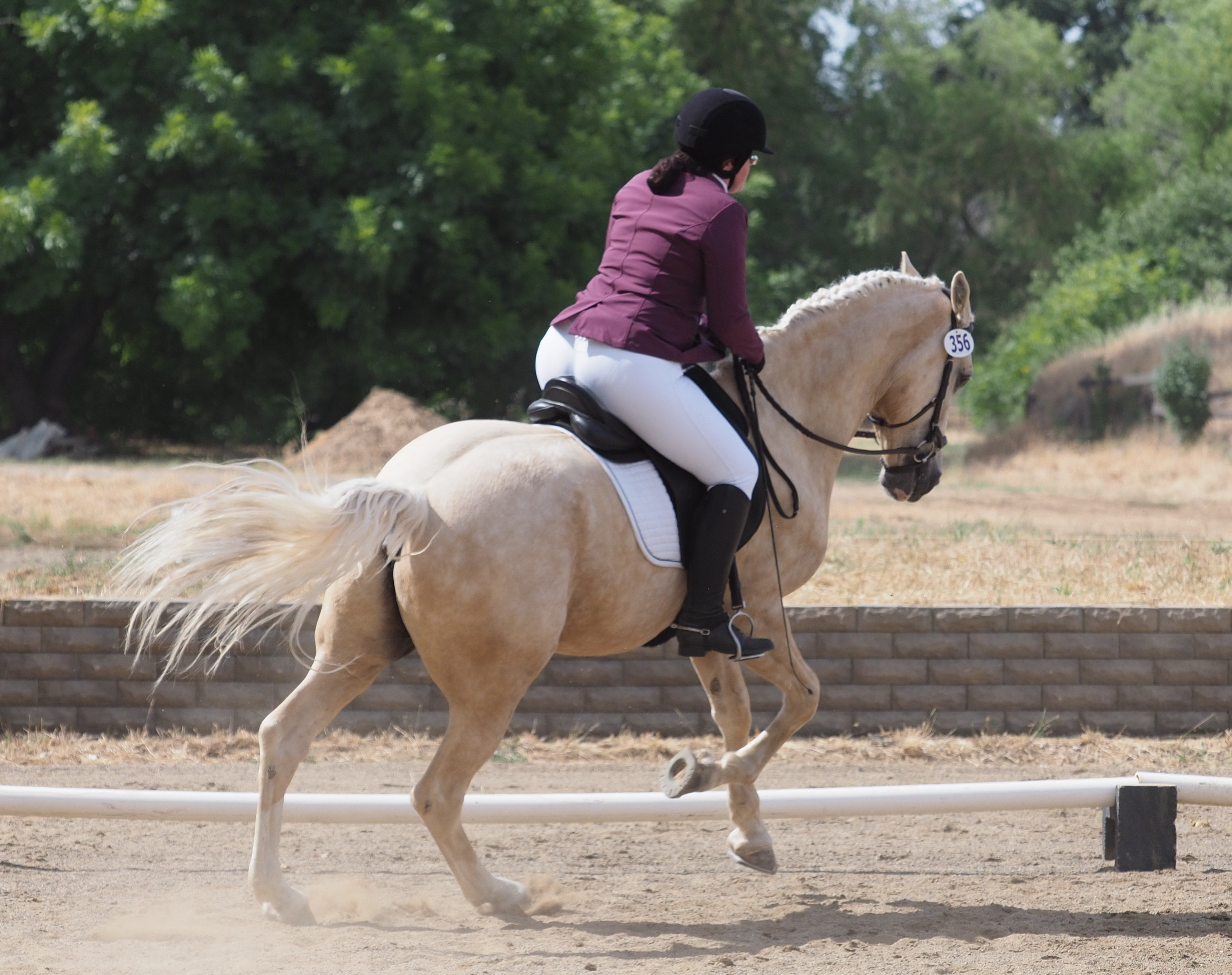 not sure why I insist on leaning forward 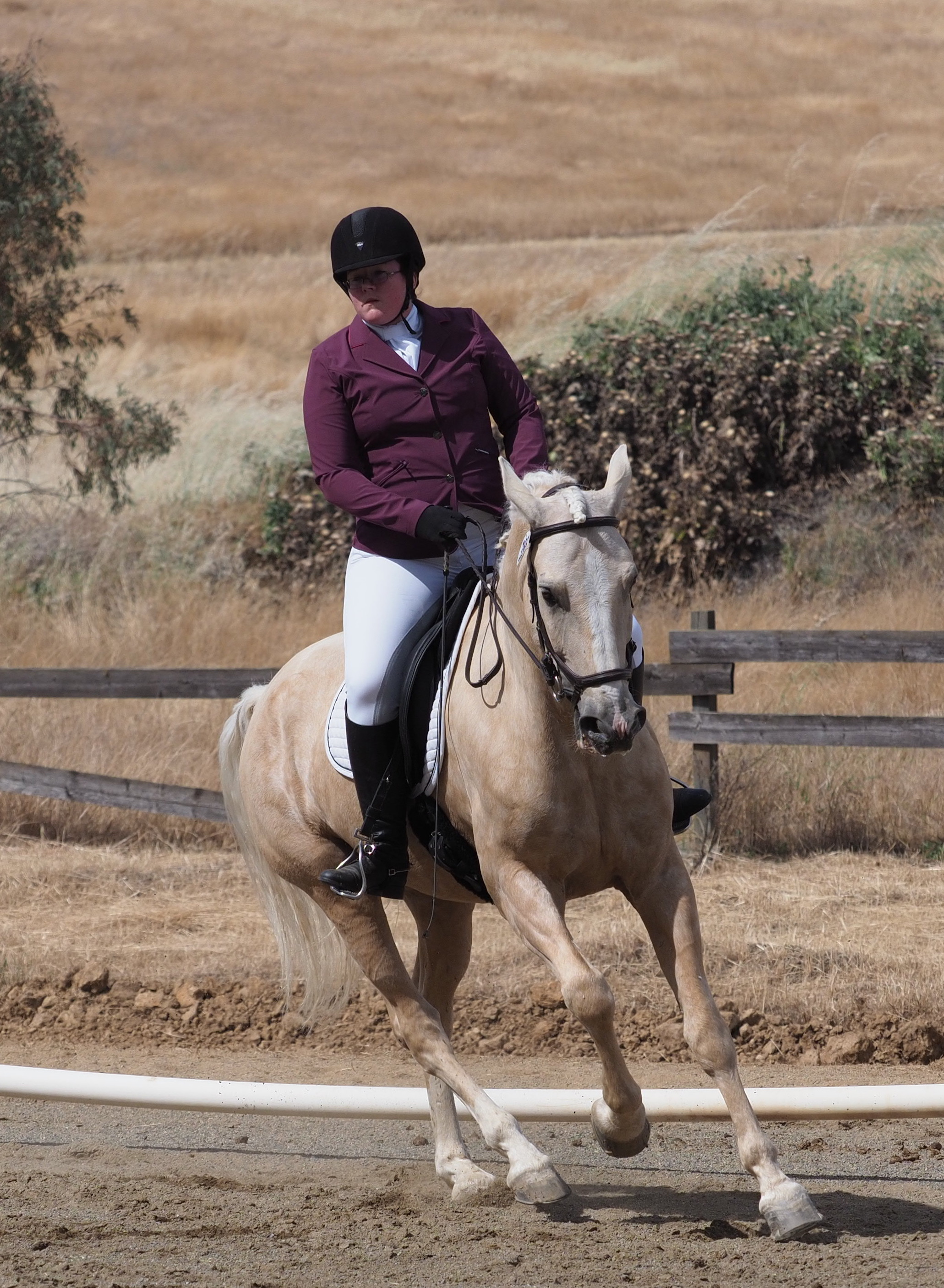 The transition was so prompt and the canter was going so well I have a clear memory of thinking I have enough time to actually work on the canter here. So I sat back and tried to pick him up a bit. It’s almost like my riding has some effect on how well he goes. 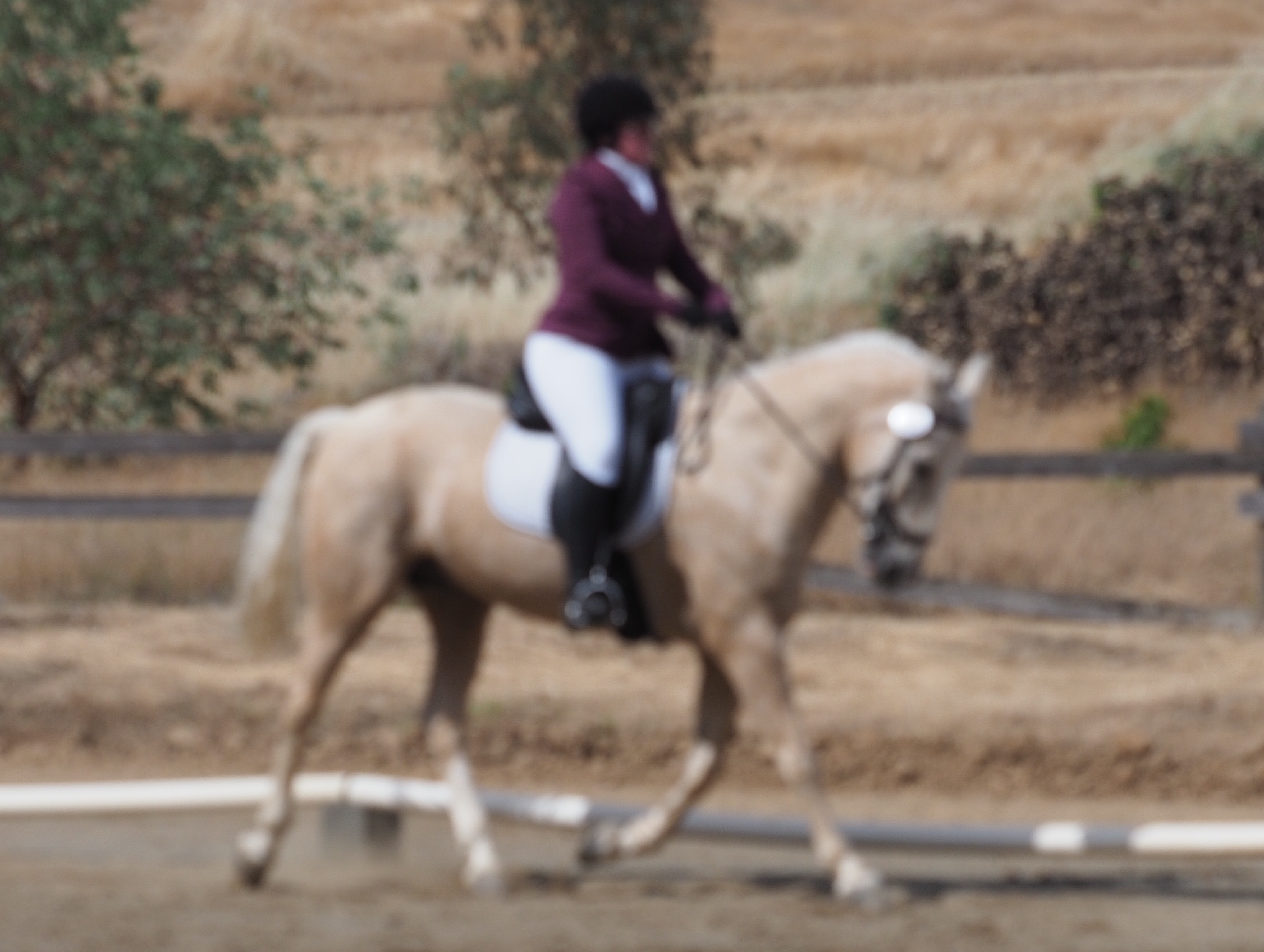 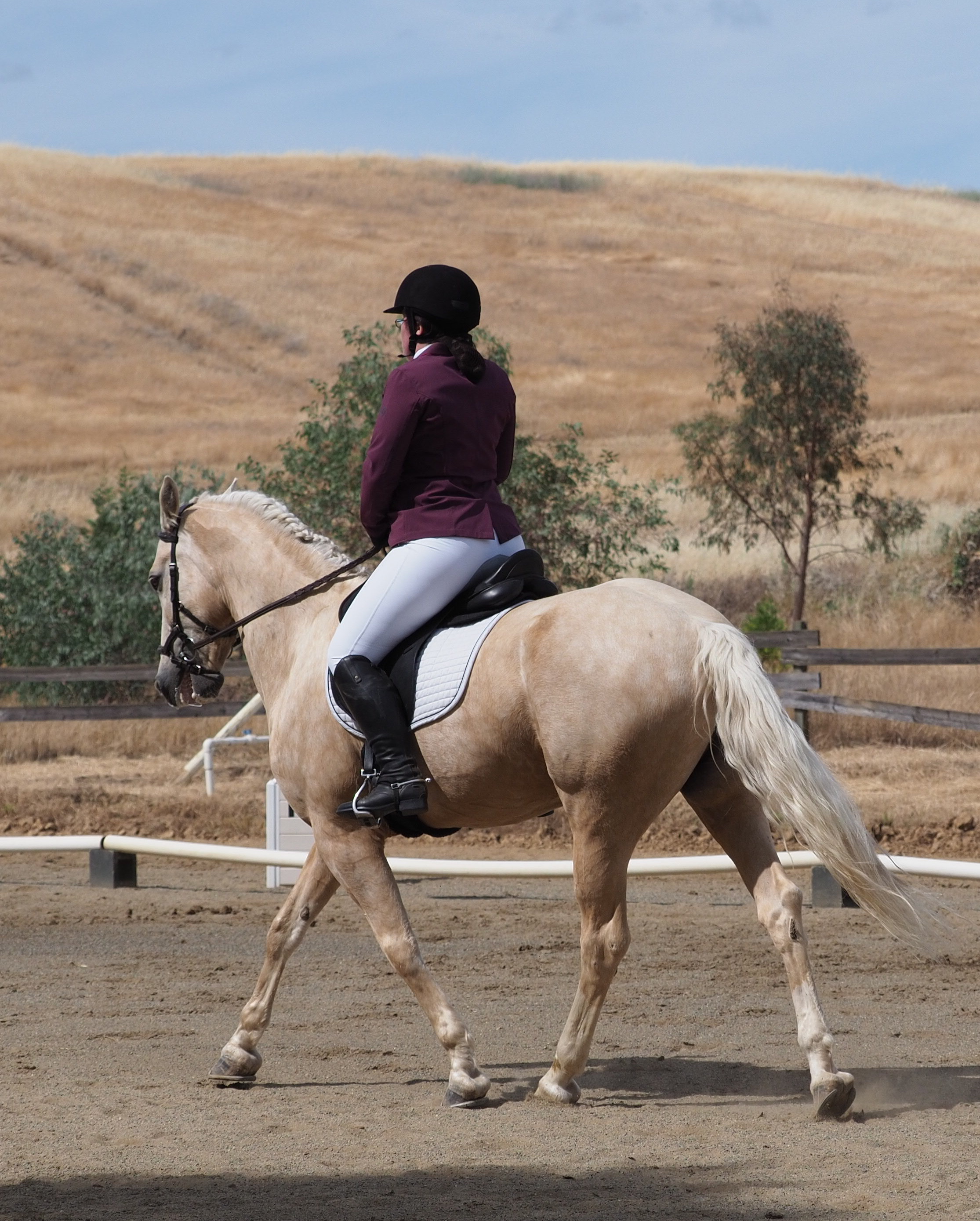 I could feel it happening and I was so annoyed. We got n 8 on this the day before. 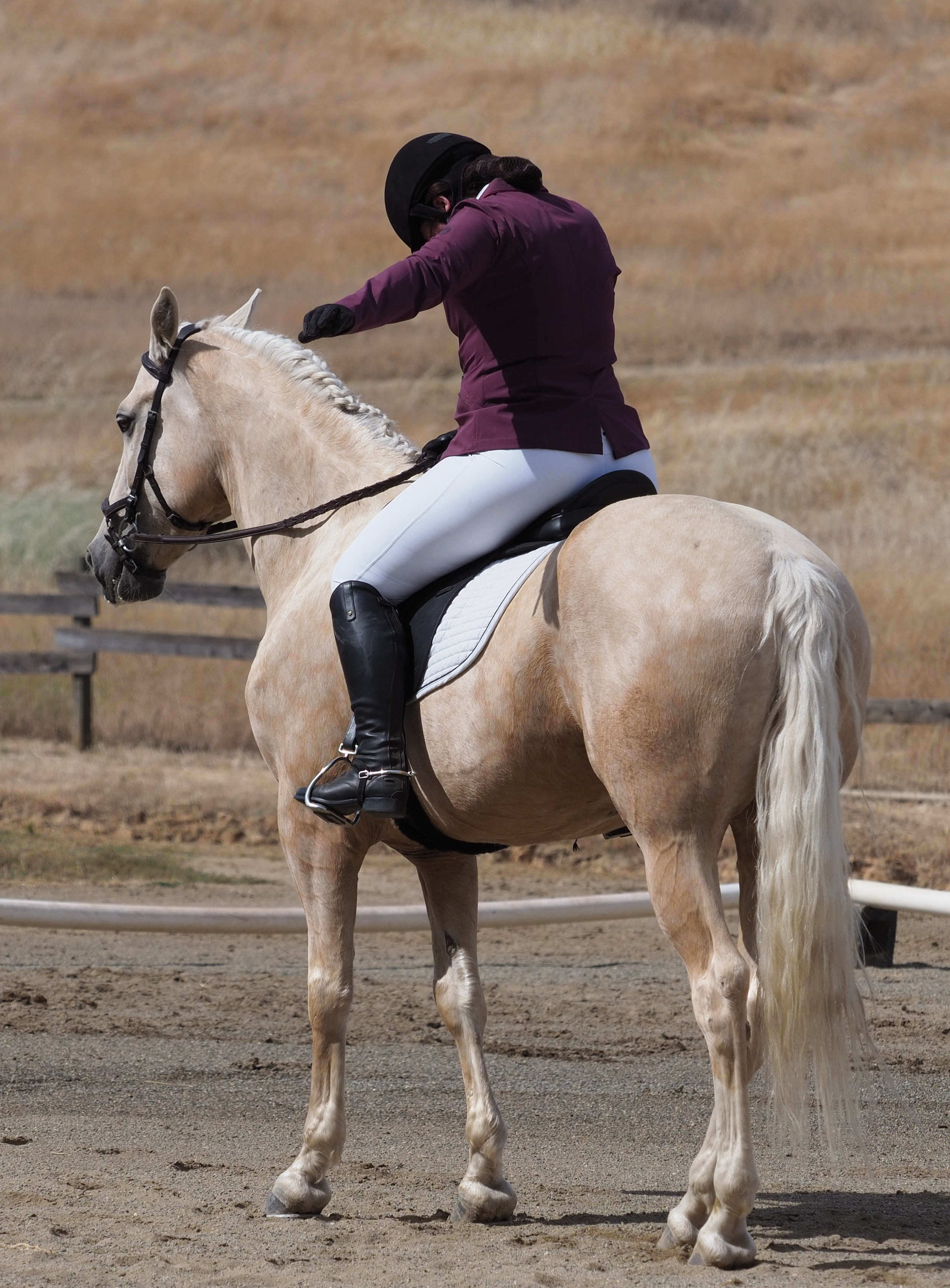 It’s really not very square, but it was straighter than I thought given we went into it a bit bulging

I totally forgot to pick my test up until the next day, but when I saw that score online, I was shocked. It’s the best score we’ve ever received at a show and it was at a rated show at that. I think the judge was overly generous, but we were 7th out of 14 in an open division! (Camelot only offered JR or Open so I was competing against pros.)

Aside from the score, it was also the best test we’ve ever ridden. Sure, it was pokey or unimpressive, but it was clean. A clean test has been my goal for a while now. I just wanted to get through a whole test without trotting during walk, or picking up the wrong lead, or some other random issue. This was the cleanest test we’ve ever ridden and probably the first time we’ve left the dressage test portion of an event without me want to murder and/or sell Levi. 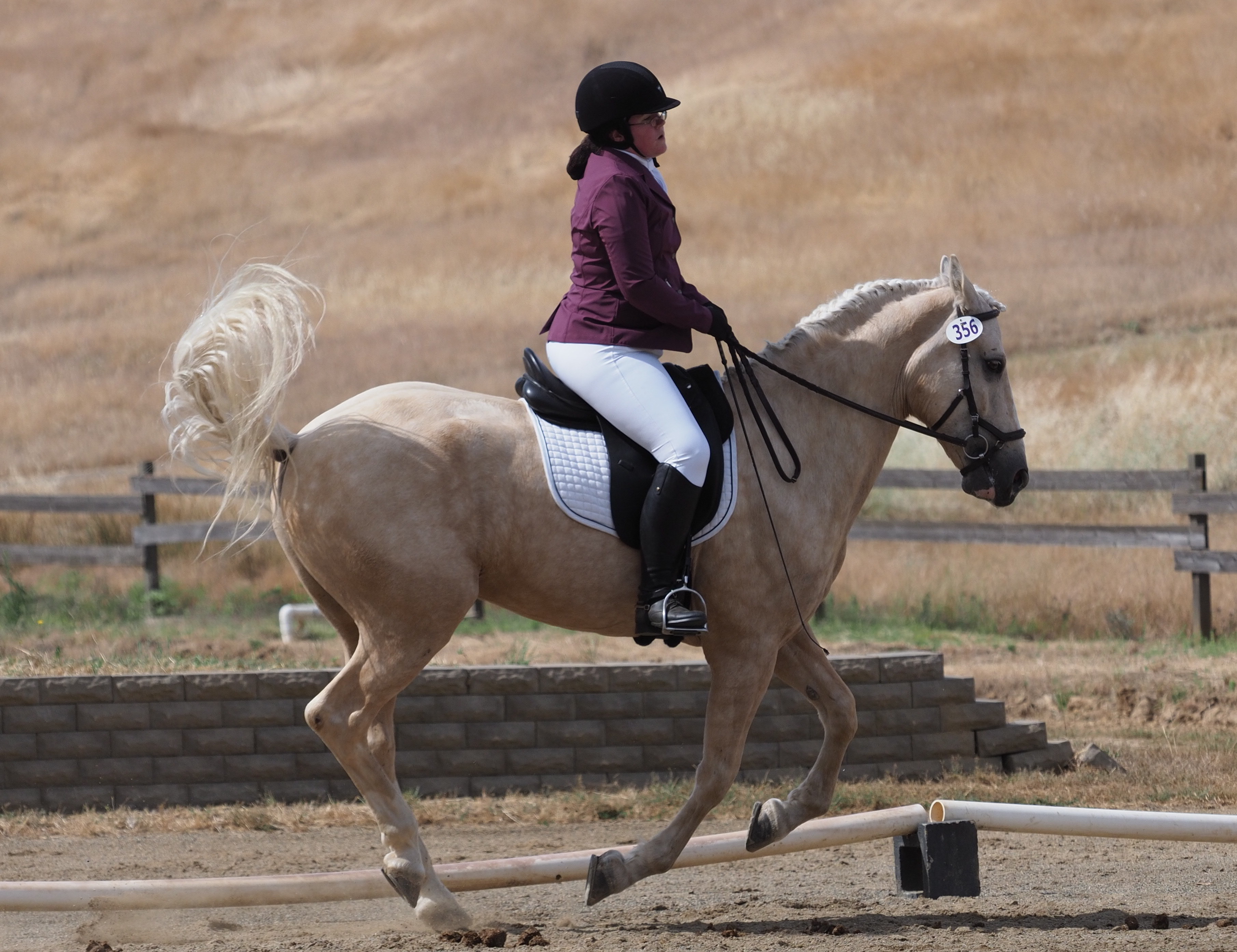 He’s pretty even when he’s sassy

I was going to include Eugene’s test in this post, but it’s late so that’ll have to be another day.

11 thoughts on “Camelot’s Over The Moon in June H.T. – Dressage”