We debated going to Camelot for a long time. I love the place, but their rated event is the same weekend as adult camp. After last year, I also really wanted to do adult camp. Unfortunately, Camelot wasn’t offering any schooling events this year making this event our only chance to do a show there. Camelot was considering cancelling the event in the future if they couldn’t get enough entries and we really wanted to support them. Leading up to the event they didn’t have enough entries and changed it from a 3 day to a 2 day event and allowing entries with no late fees after the closing date. They also offered an open Margarita bar all weekend. They ended up filling the event.

Although the Friday part of the H.T. was cancelled, they decided to offer schooling dressage tests on Friday. I really love the opportunity to school at the facility before the event. At $20 a test it was a total deal too. I drove the horses out Thursday morning to get them set up. It was stupidly hot and once I got the horses set up, I parked, unhooked the trailer as quickly as possible, and went to the hotel to collapse onto the couch in the air conditioning. My husband had to work and drove out later that evening just before sunset when it was cooler. We tacked up and took the ponies for a walk around the facility just to let them stretch their legs and snort at scary crap. My husband had the idea to walk his dressage test in his arena and I thought that was smart and did mine in the neighboring court.

The next day we were up bright and early to get breakfast and get to the horse park to do a practice dressage test. My husband had to work so he took the earliest slot possible. Someone managed to sign up between us, but I got the 3rd slot. We didn’t bother braiding or dressing up for this one. In fact, I was decidedly underdressed in my holey and worn Kerrits, my endurance half chaps and boots complete the baling twine spur straps. To make it extra classy, I included Levi’s two horse tack maroon breastplate and wore my maroon XC helmet. 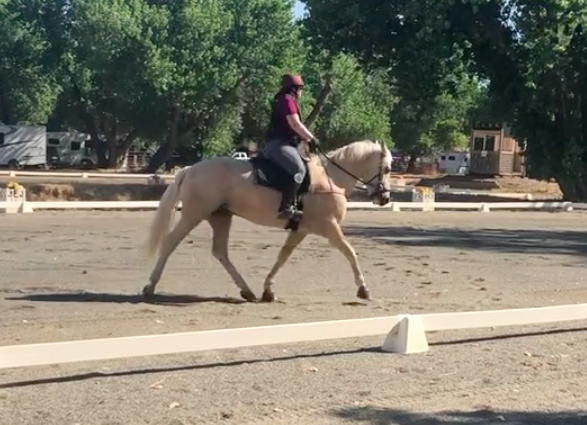 Whatever. It was stupid hot already at 9am and I didn’t want to re-clean anything leather. The judge didn’t care at all. We finished our test and her comment was “do that again tomorrow.” I laughed and said I’d try. Her final comment on the test was “seems a bit unhappy with bridle/bit today.” Today. Haha. I wish it was just today! My husband’s test also went pretty well. They didn’t tally the scores, but I did the math and it would have been a 33. A bit overly generous, but it was a decent test. At least he put on nice breeches and his leather bridle for his test. 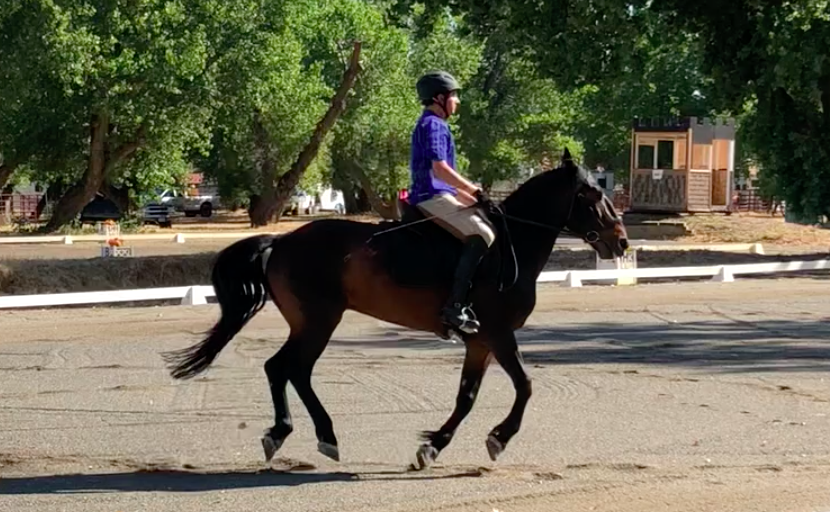 Look who got the correct lead!

After that, my husband went back to the hotel to work and I took Levi to be murdered by wolves off by his lonely self. Actually it was just the wash stall, but you wouldn’t know that from the amount of desperate screaming and jigging that occurred. I hung around until Kate arrived and then went back to the hotel. I picked up my husband and we returned to the horse park to see if Kate wanted to join us at Horse Expo. She did want to, but she also had to teach all of her students and decided to stay back.

We drove 2 hours in traffic to the Horse Expo and then raced through the place. You need a full day to do the Expo justice and we had 2 hours. The main reason we were there was to look at horse trailers as we want to get a new one and wanted to size things up and see what appealed to us. This took a lot of time and it was all outdoors so we were roasting in the heat. Then we hit up the vendor halls which were oh so thankfully air conditioned. Horse Expo was amazing and I took 0 pictures. We were in such a rush, we were basically going from booth to booth, grabbing a card, and moving on. I totally fell in love with these sheepskin bareback pads from Christ sheepskins. The vendor was there though I have since discovered that Riding Warehouse sells them. I told my husband I want one for my birthday. 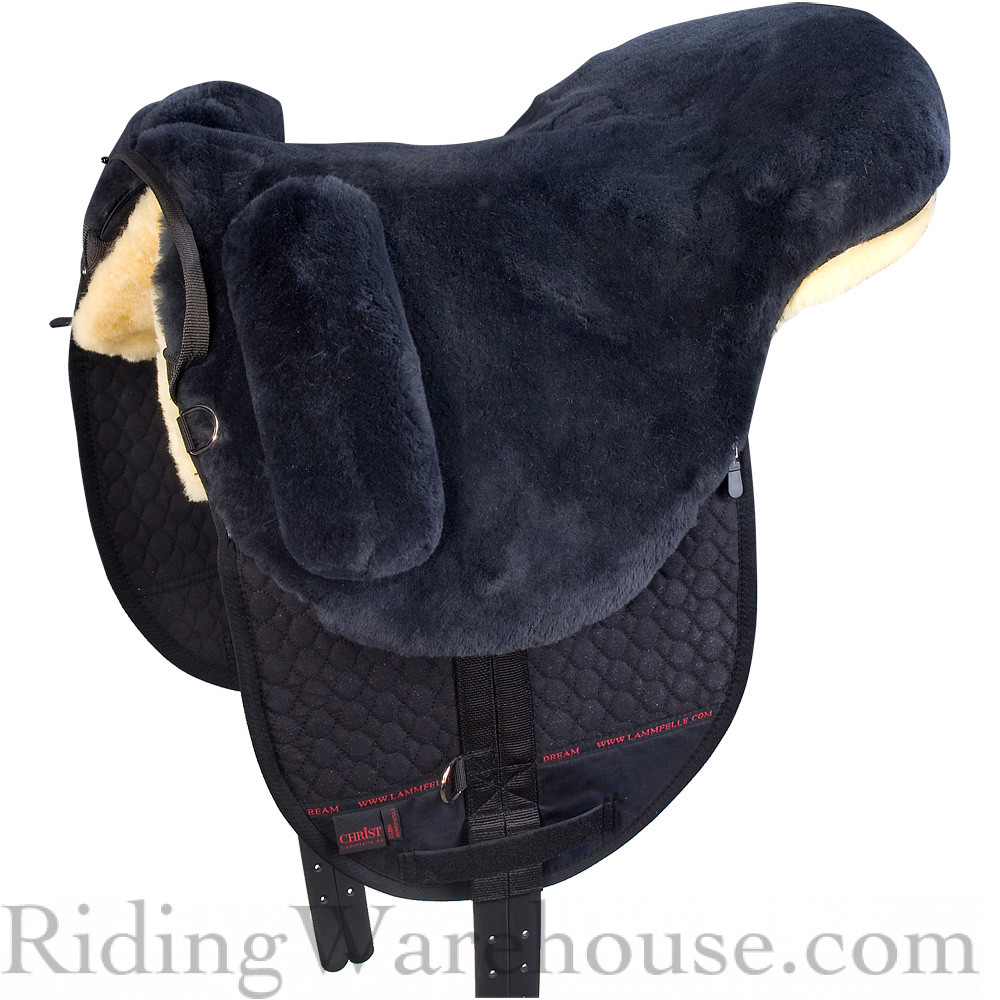 I did buy a new pair of breeches from Buckwild. I’ve been really intrigued by their breeches, but hesitating because I didn’t know how they’d fit. I tried the maroon ones on and they fit perfectly. Dammit. I do not need another pair of maroon breeches. But I do need a pair of white breeches that actually fit. Wouldn’t that be fun? So I tried those on in the same size and they didn’t fit. Cue sad face. At first I was like, am I imagining this and the owner came over to explain; they treat the white breeches with an anti-stain treatment that makes them a little tighter. It makes them resist stains so I see the value, but I was sad they didn’t fit. Sadly, they were back ordered on white in the next size up. Seeing how upset I was, he offered me even cheaper than the already Expo sale pricing on the maroon ones and said he’d honor that pricing if I emailed him in a few months when the white became available. My husband finally caved and said I could get one pair. I debated hard between the foxes and the maroon, but decided on the maroon. I’m having a bit of buyers remorse about the fox breeches though; they were seriously cute.

I also bought Platinum Skin and Allergy to try on Levi. I have been wanting to try it and waited to buy it at Expo to get the sale price. They didn’t have that one there, but they mailed it for free and gave me a bunch free Platinum bars that our horses love and I never buy because they’re so pricey. I also spent a bit of time checking out the Schleese western saddle. I didn’t know they even made a western saddle. It’s a really innovative design that solves saddle fit issues for both the horse and the rider in a way I haven’t seen before. If I had a spare $4,500, I would totally get one.

At this point the Expo was over, all the vendors were closing up around us., and we hadn’t even seen everything. We headed back out into the heat to our car and made the long drive back to Camelot to walk our cross country courses. By the time we were done walking the courses, it was dark. We quickly fed the ponies, get stuff put away and returned to our hotel to get dinner. We at dinner at like 10:15pm at the Applebee’s across the street from the hotel. We considered going somewhere actually good, but we were too tired. We were both so exhausted, we finished dinner, fed the dogs, and went to sleep without cleaning the rest of our tack.

12 thoughts on “Camelot’s Over The Moon in June H.T. – Thursday and Friday”