My husband had previously schooled parts of the Novice course at Woodside, but he wanted to run the whole thing before the course closed. The schooling went really well. Eugene was even fine with the ditch in the half coffin and the massive table. Then we got to the park and discovered that they’d changed the course. The big table I thought was terrifying during schooling was apparently now on the Training course, they’d moved some of the jumps by the second water, added a huge ramp jump before the ditch, and they’d added two steeplechase jumps. Here’s the course walk, if you’re interested.

Even my husband, who generally like XC and thinks it’s fun and isn’t crazy like me, was a little worried about those steeplechase jumps. They don’t really look it in the pictures, but they were big. Luckily, Eugene will jump anything my husband points him at. I knew if they could get over the ditch, they could handle everything else.

As my husband was hanging out at the startbox, there was a loose horse galloping across the course. I saw him run past me out where I was waiting to take pictures, but he wanted nothing to do with me – or any of the other people who tried – catching him. My husband was so distracted by the loose horse he missed the count down and wasn’t really prepared to go. You can hear him talking to the start box person at the beginning of the video. 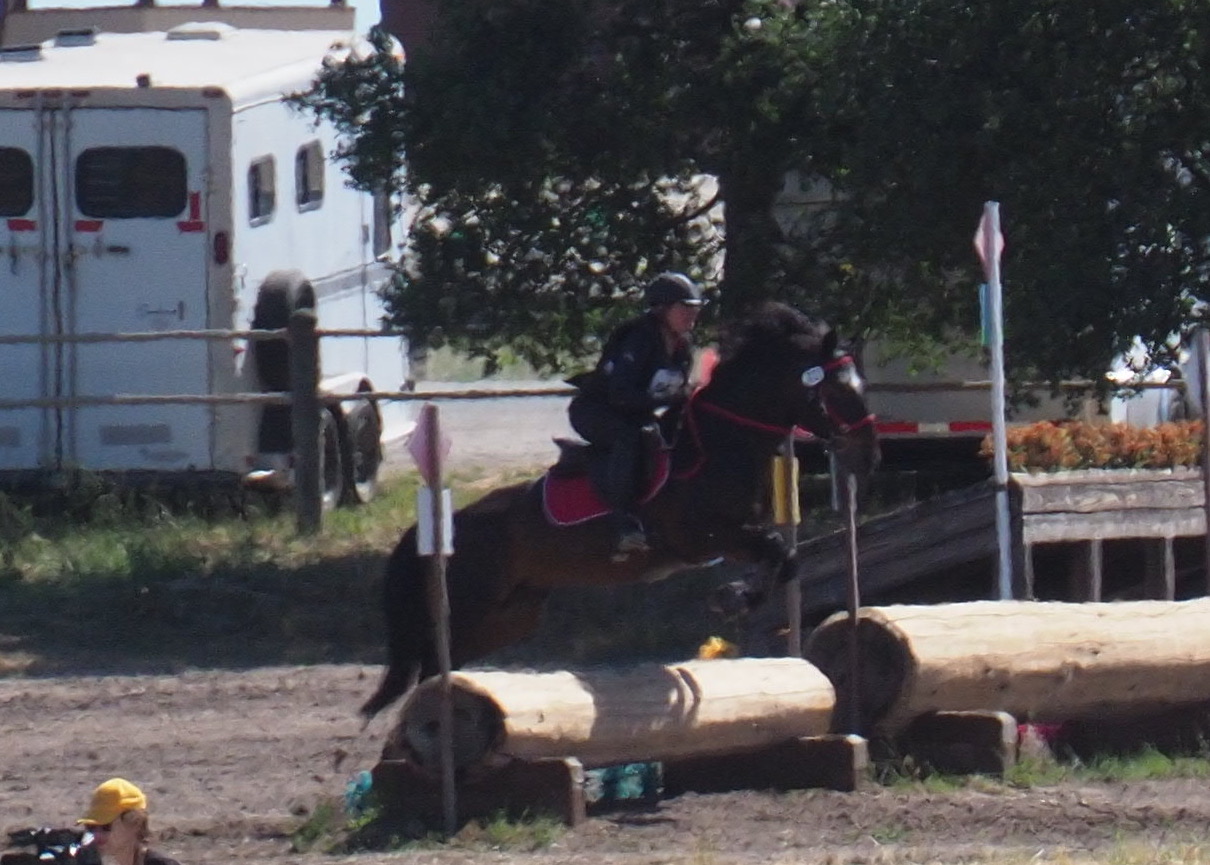 They hopped right over #1 and then tried to take off down the hill to #2 because he was super excited. 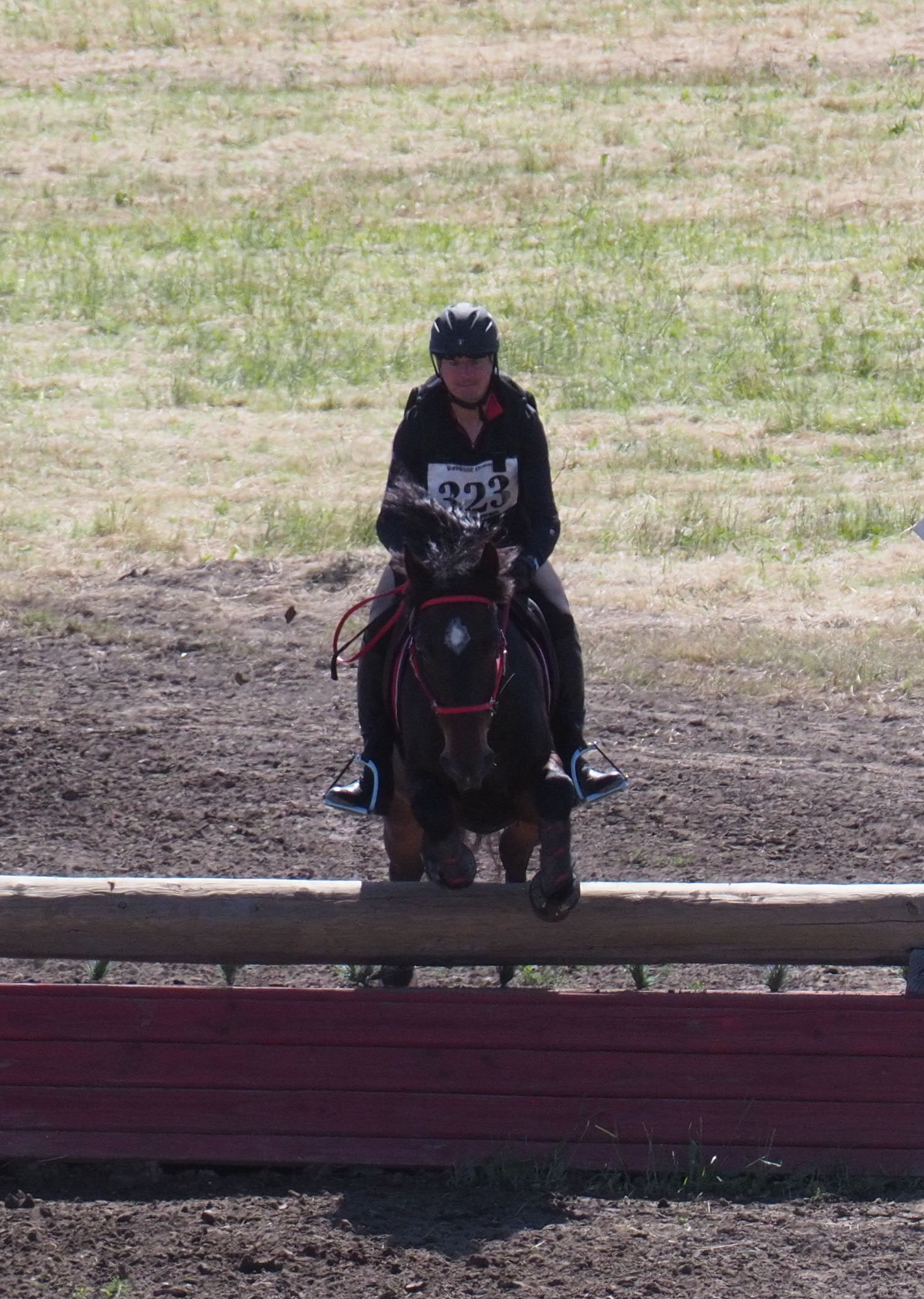 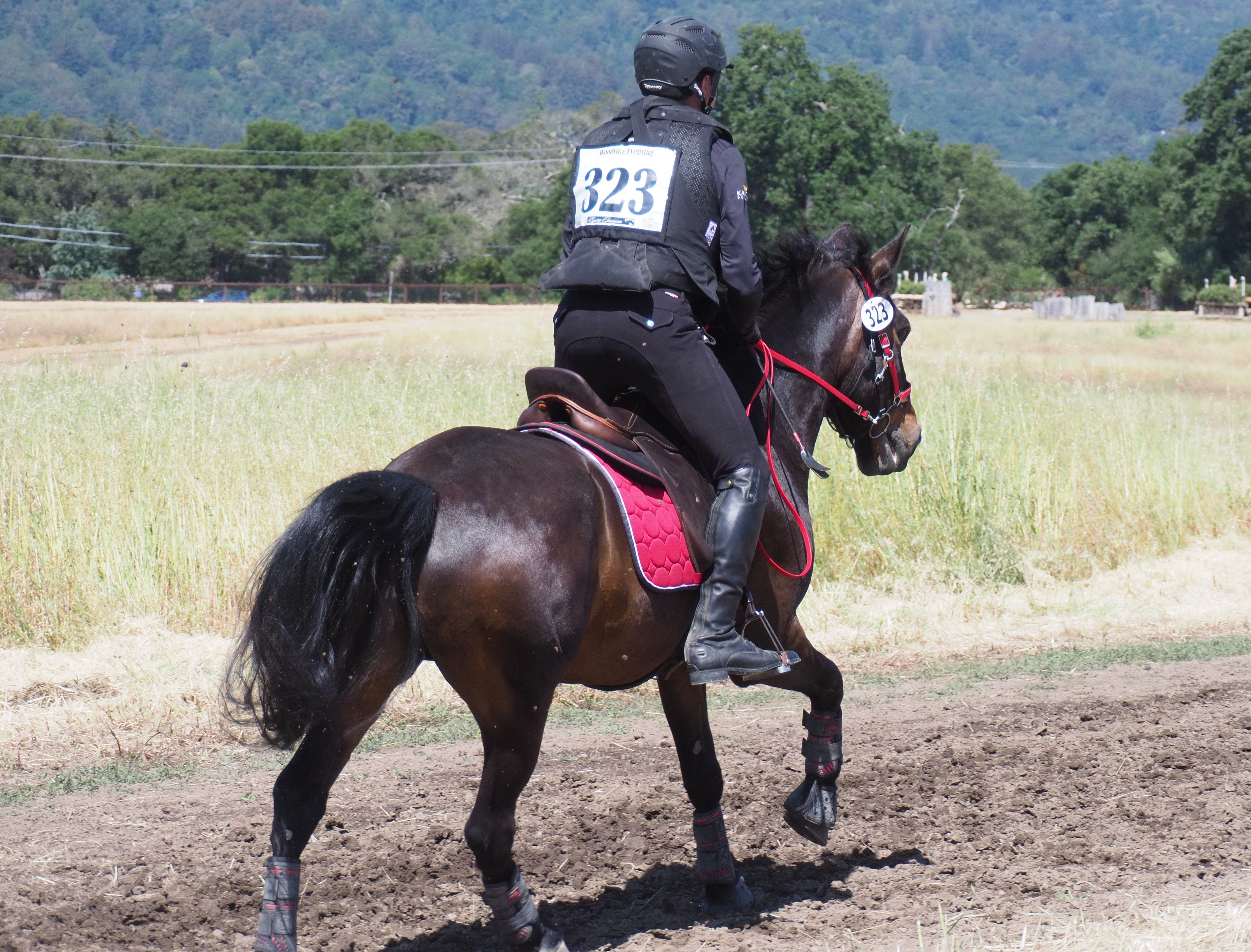 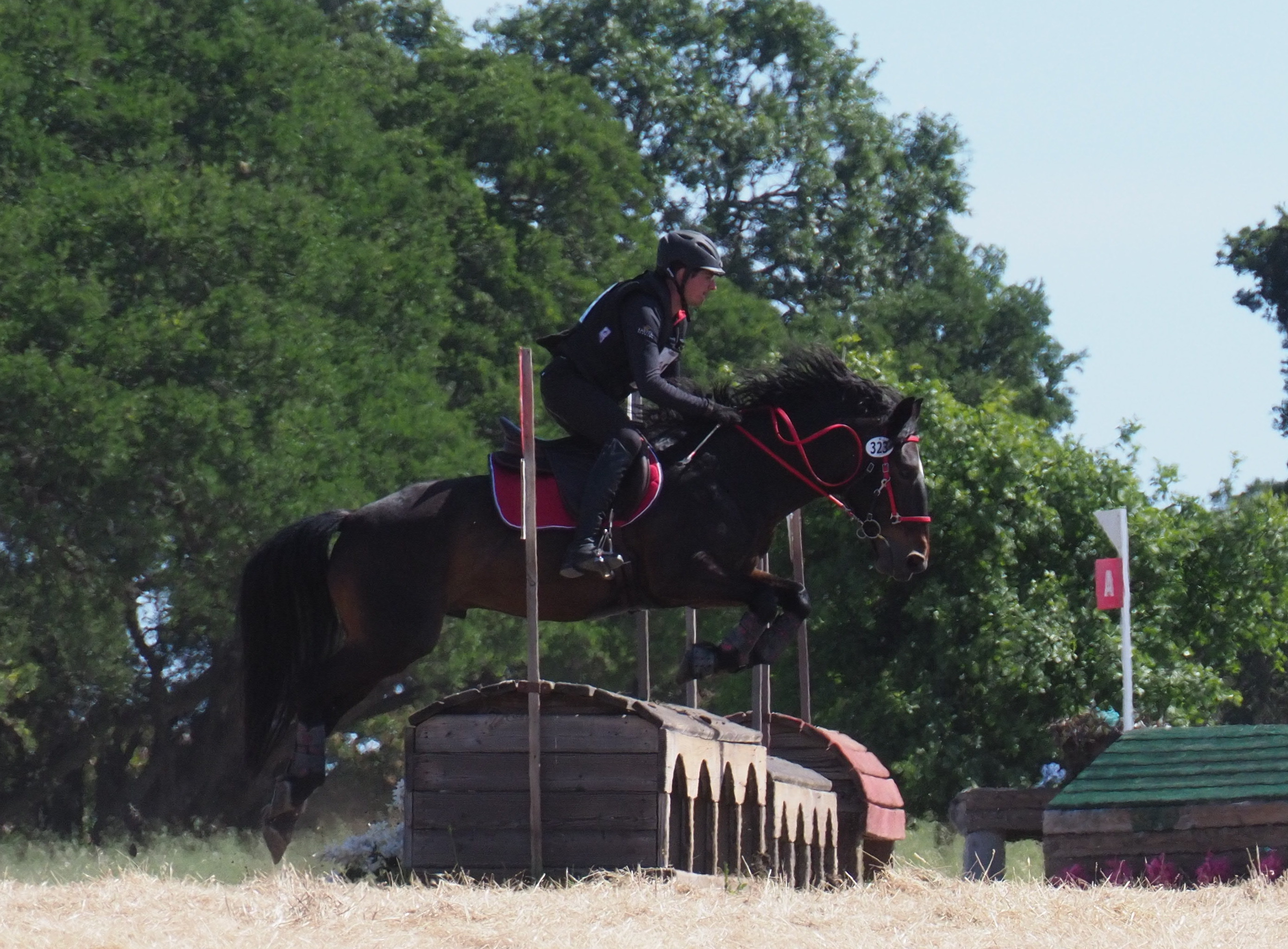 Then I lost track of them until the cabin combination at 8. They were so far away though, I didn’t get a good shot. Then it was down the long hill to the big ramp at #9. If you watch the video, you’ll hear that my husband had some issues getting Eugene to woah up on that stretch too. This jump wasn’t there when they school the course, but Eugene is a good boy and popped over it after a little peak.

Down the hill to the log and ditch combination and they cleared them both. I could only see their heads bobbing about the grass, but I knew they were over the ditch and breathed a sigh of relief. My husband was so busing patting and praising him for getting over the ditch, he ran a bit off the track and lost some momentum going up the hill to the first steeplechase. There were a lot of people hanging out around that Steeplechase to send Eugene off to the side, but they made it over. 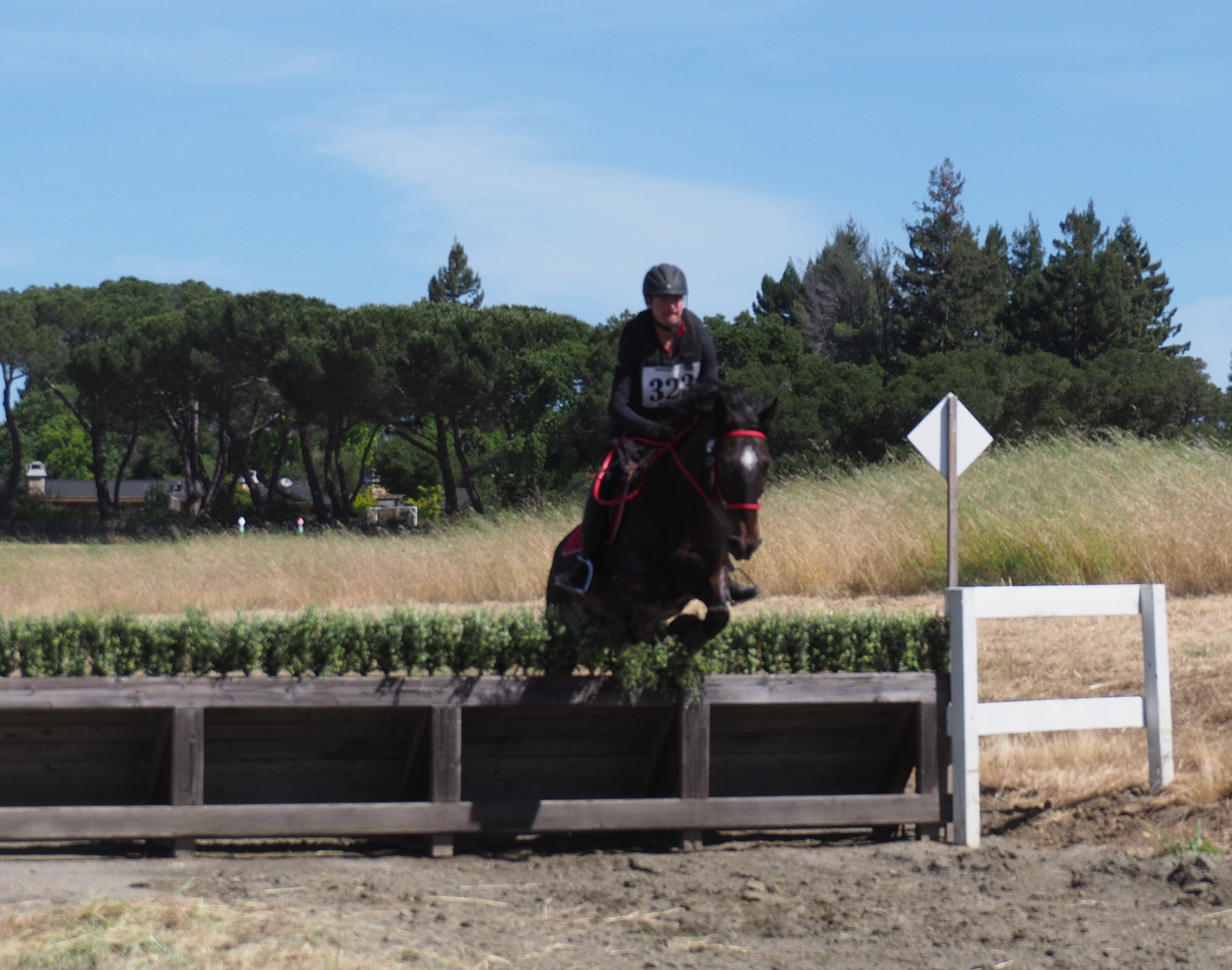 My husband tried to get Eugene to slow down a bit between the two steeplechase jumps to give him a breather, but Eugene thought that was dumb and he gave up the idea pretty quickly. They aced the second steeplechase and the the trakhener.

I couldn’t really see them after #13, but they managed the combination with the downbank really well and had no issues jumping into the water. Tis was one of the jumps they moved and it’s placement right before the water might have caused some horses issues, but Eugene loves water so they were fine. Then they were through the water and over the last jump, which had been moved into a very weird line that didn’t face the finish line, but they made the turn an finished double clear on their first Novice.

Woo little Mustang! Their double clear even moved them up to 8th place (one out of the ribbons) in a field of 17. That was a pretty fantastic first Novice.

I’ve done the BN cross country course at Woodside a few times now. In addition to schooling it with both Nilla and Levi, I’ve even done the first half of the course at the Derby last September. We also trailered over the day before they closed the course for this event and I had Kate run him through the entire BN course and then did the course myself. It did not go well. Levi was good, but I was a wreck. We did get around the whole thing though.

And then we got to the park to walk the course and found they had changed it. They haven’t changed any of the BN jumps in years (literally), but of course they changed it for me. All they did was move two jumps, but one of them is the jump I am terrified of and they made it so much worse.

I’ve been terrified of Jump #9 for a long time. I even skipped jumping it and took the intro option at the Derby. I only jumped it once at the last schooling and while I still considered it horrible, I was truly freaking out about how they moved it. They moved it to the bottom of the hill and added terrifying flowers to the top of it. Levi is terrible at moving down hills at speed (honestly, he’s not very good at it going slow either) and he’s spooky about scary flowers stabbed into the top of jumps. It was a recreation of our refusal at Fresno in November with a downhill approach and scary decorations, except now the jump was twice as big.

When it was finally time for me to go, I put off getting on for as long as possible. When I got to the warm up, we walked around for a while and I asked Kate what was the bare minimum amount of warm up I needed to do? We trotted a bit, did the crossrail and then did the log. He got a horrible distance to it and we had to redo it way more times than I wanted to. Finally, I did the big feeder jump and we got a good stride to that so I stopped. All the while I was fighting an increasing desire to throw up.

When the ring steward called for me to come over near him to be on deck, I walked over and Levi proceeded to jig in place while I sat there contemplating throwing up, quitting, or both. At this point Kate came over, grabbed Levi’s reins and – when the steward said we could go – walked me across the road and around the start box like a small child. In reviewing the helmet cam video later, my husband asked me why the Kate was leading me and I said I didn’t know, I hadn’t asked her to, but my best guess is she probably thought that if she didn’t hold on to Levi, I’d just walk back to the stalls. I asked her about it later and she said she looked over to see me holding my hand to my mouth with Levi doing his – as she calls it – “shitty piaffe” and thought she better come intervene.

As the gate attendant counted me down, I realized that my watch wasn’t working. Great; one more thing to worry about. Then we were off and Levi was like, maybe we should just go back to the warm up where all the other horses are instead. We had no impulsion going into the 1st jump. 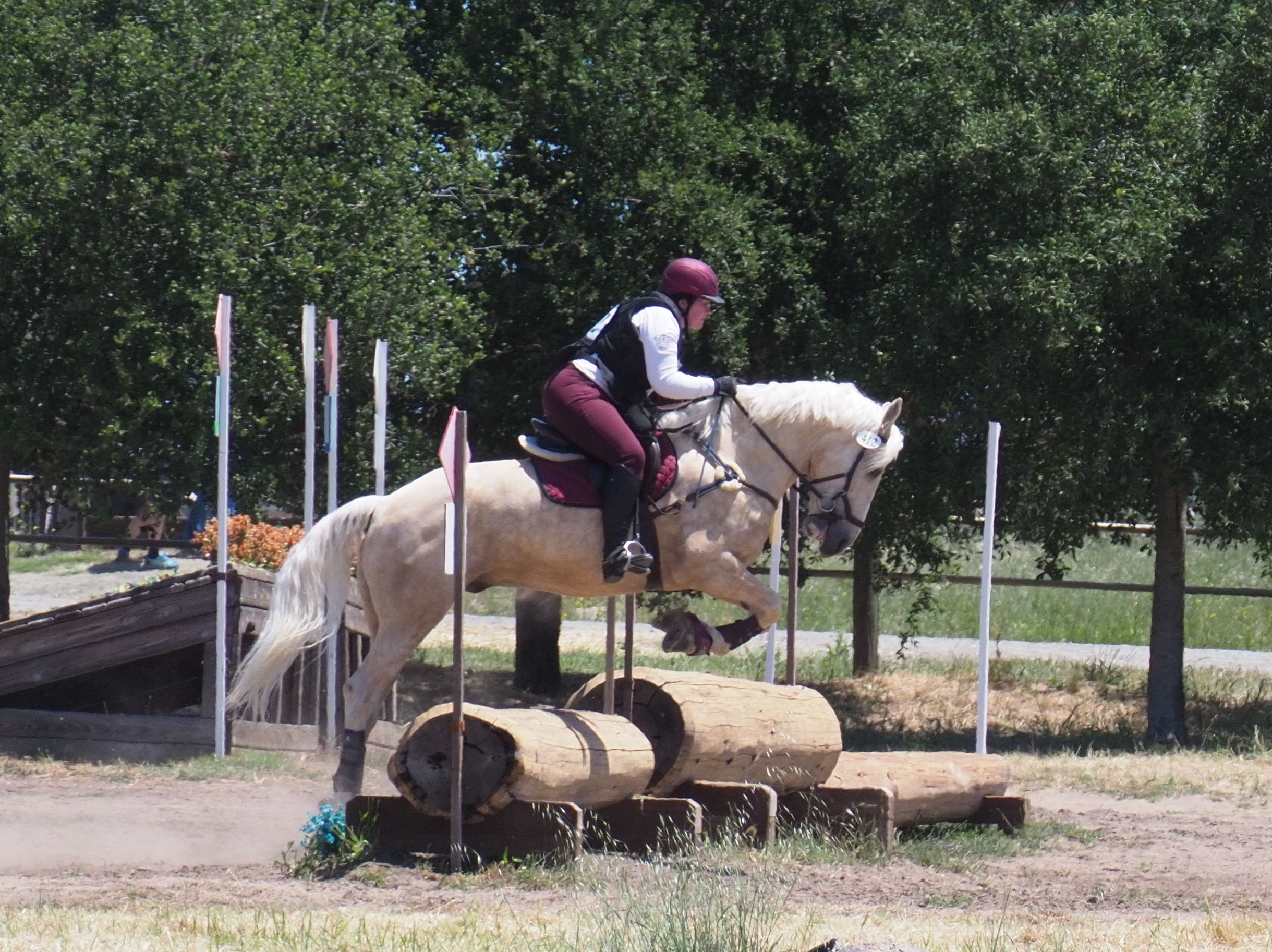 Then we continued that argument into the grass after #1 instead of heading down the track to #2. I finally got him to go down the damned hill, but he kept trying to go off to the left instead and I rode the second one way too defensively. 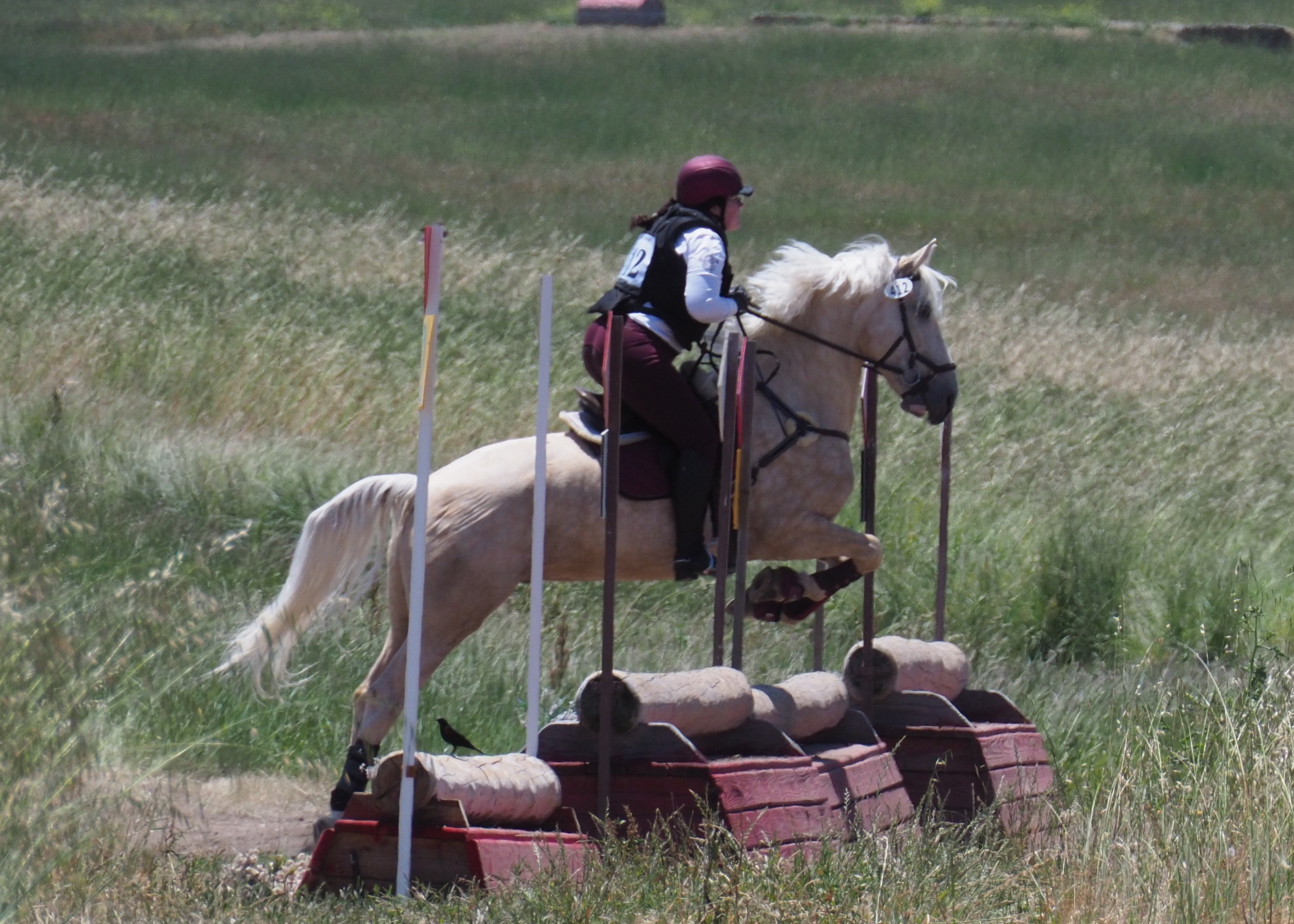 After that we finally got some momentum going and went over #3 pretty well. Kate drilled us on the coursewalk about not pulling around the turn to #4 and I tried to do that even though I felt like we were barreling out of control and Levi hit it rather hard with his hoof. 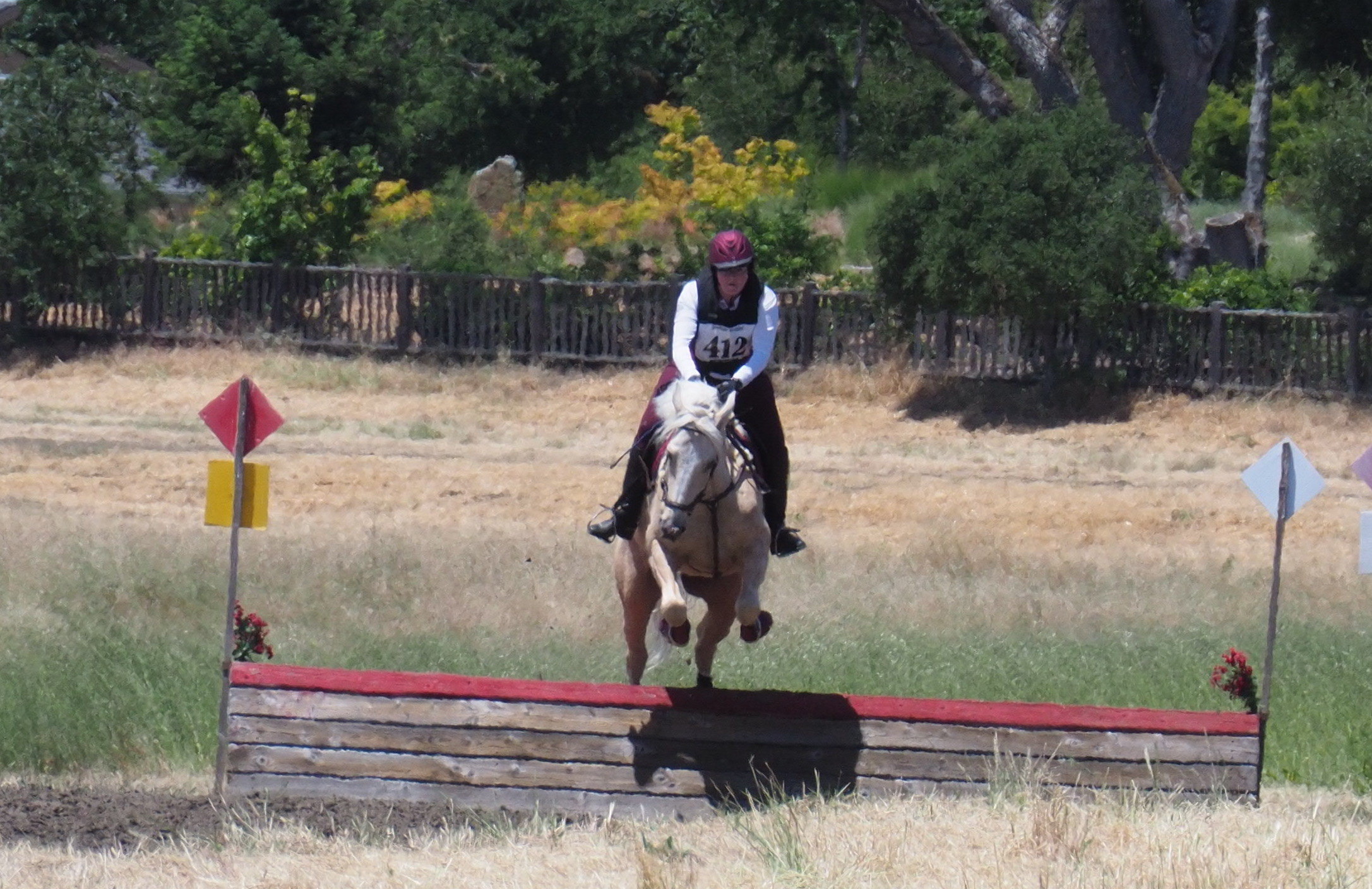 I had to woah him a little bit before #5 as he was just running away with me, but he listened and we got over #5 okay although from closer than I would have liked.

I trotted him into the water in case he wanted to stop and jar my back. Then we quickly got back to pace and out over #6. 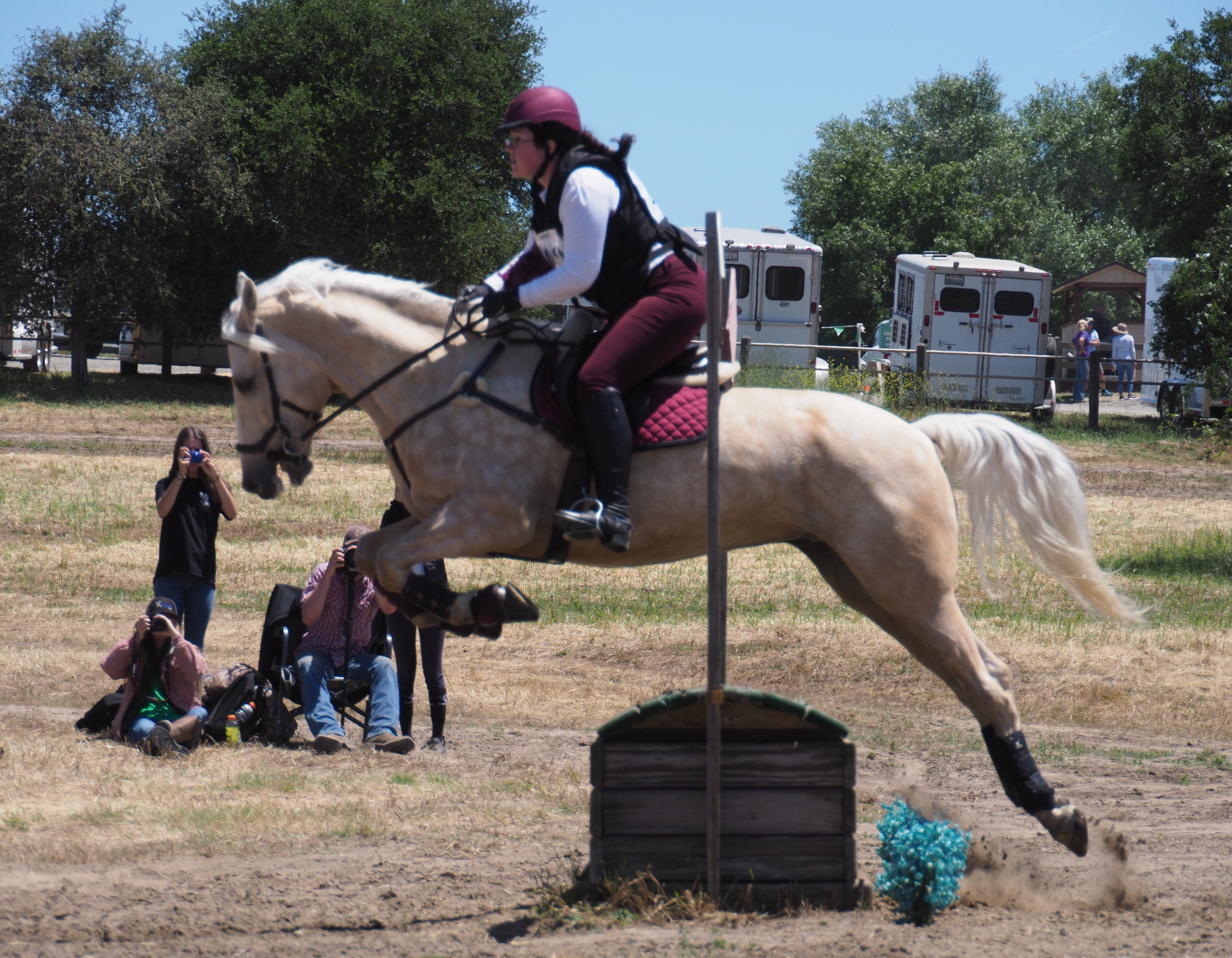 We popped over #7 and got a cheer from the jump judge and then had a long run down to #8. My husband wasn’t able to get a shot of that one though. 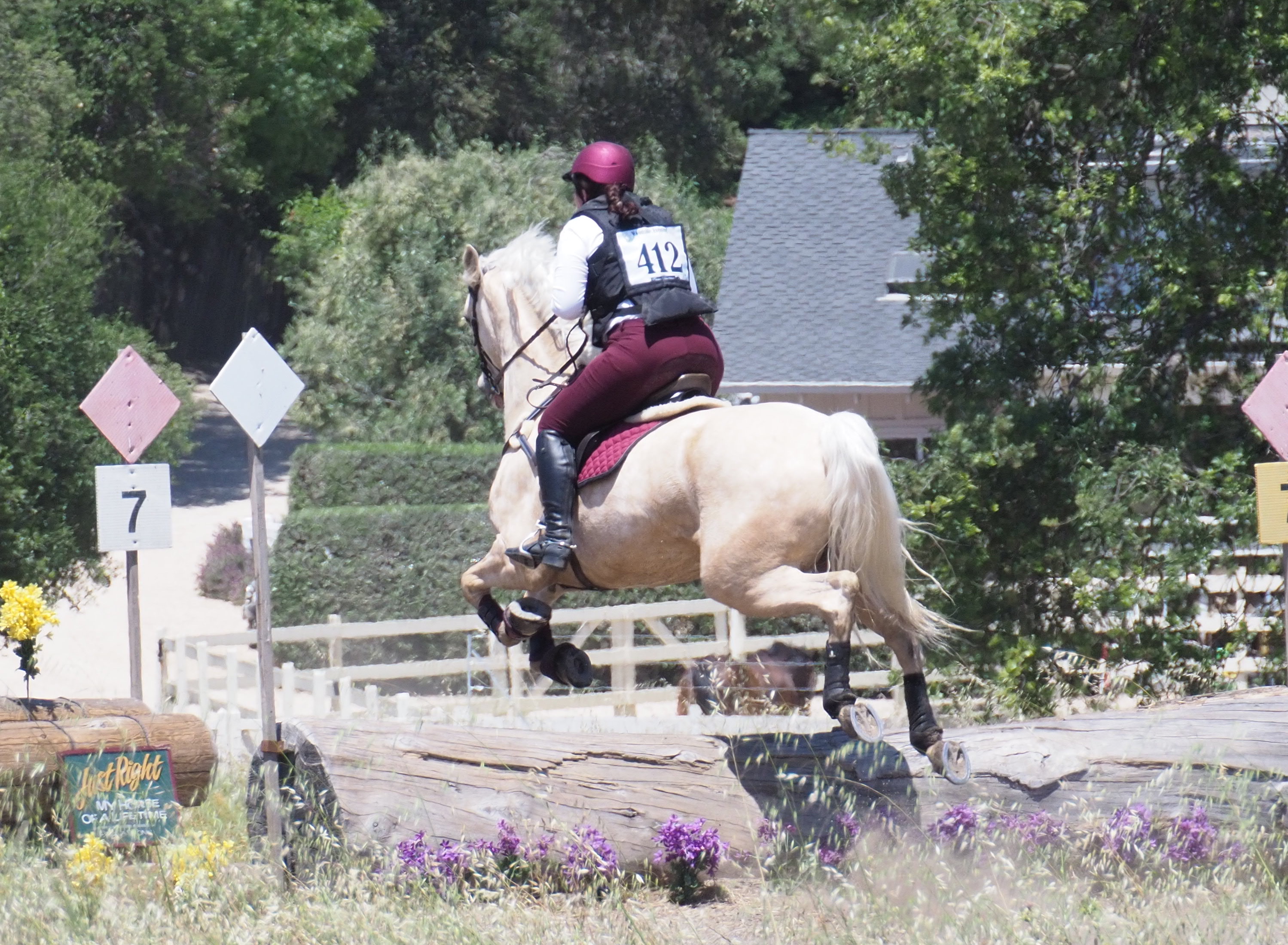 After #8 we had a long downhill to #9. I wanted him to trot because I had no idea how fast we were going, but I assumed it was too fast and also I did not want him to face plant going down the hill. Levi strongly disagreed with this plan and we had a low-key argument for most of that hill. Then I let him go back to canter because I knew we needed more impulsion for the 9th jump which I was terrified of. But then he started building momentum going down that hill and I wanted him to sit back a bit. He wanted nothing to do with that and I ended up yelling “Woah” really load as we barreled down on the poor jump judge who looked up at us in terror. But Levi was locked on to that jump and took it like a champ. 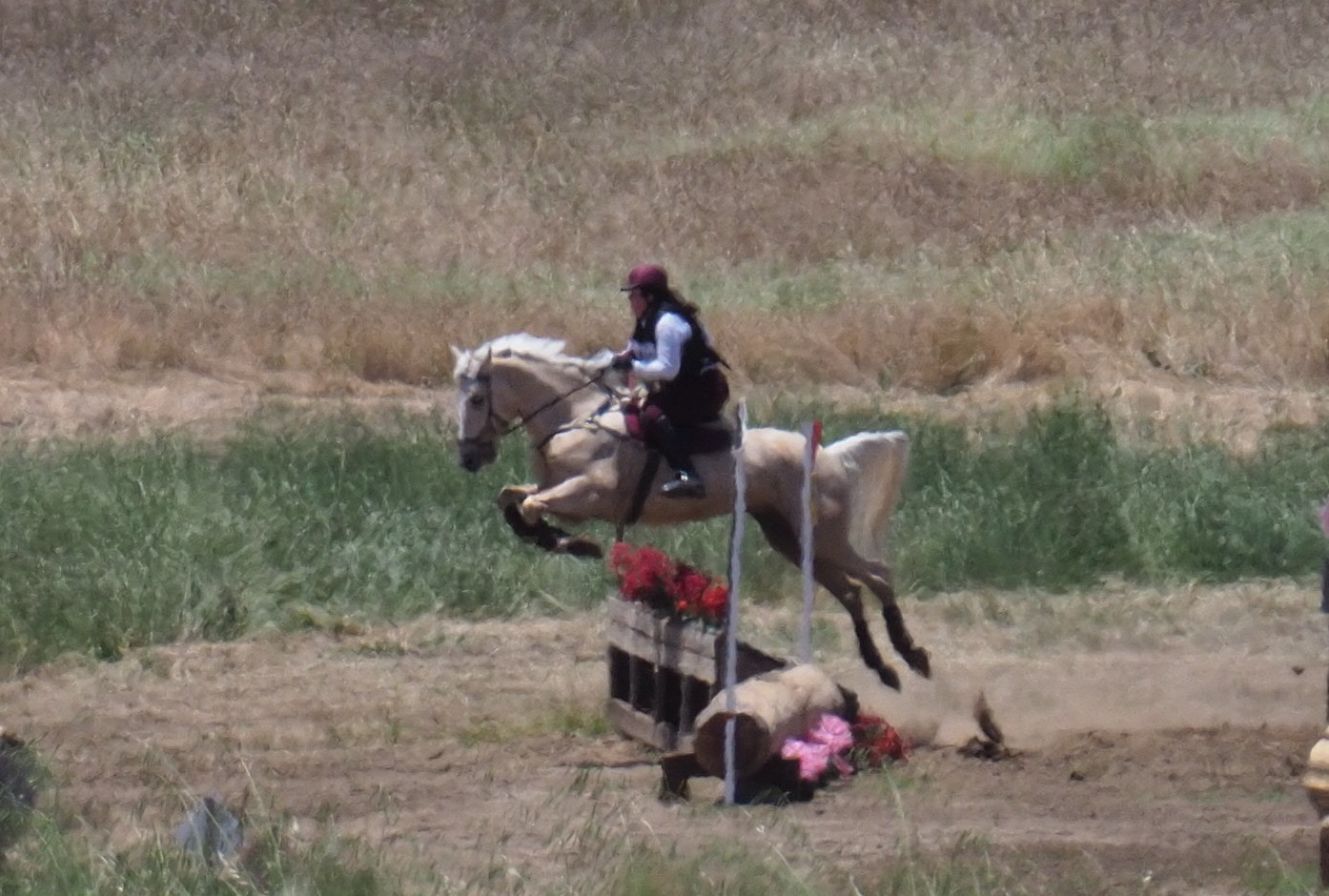 He got a ton of pats and praise for that and we were off. My husband wasn’t able to get any more pictures after #9, so here’s the Helmet Cam.

The combination at #10 and #11 rode really well and then we had to have another argument about trotting before the faux trekhener at #12. We were up the hill and over #13 with enough impulsion to actually enter the water at speed. He flew over #14 and with no idea what our time was, I just let him run at the last jump and across the finish. He was so pumped, he just galloped up the hill for a bit before finally coming back to me. My husband failed to edit out my relieved cursing there, so maybe stop watching after 5:15.

20 thoughts on “The Spring Event at Woodside – Cross Country”