After dressage, we had a bit of downtime before my husband’s stadium round at 3:53 and my XC time of 4:15. There was a big accident at the construction site that’s basically along the edge of the construction course. There was a ton of confusion about wether XC was cancelled or not, but they eventually made an announcement saying it was delayed, but they were going forward though they might have to make a decision regarding intro depending on sunlight. Sunset was at 4:48, a time I was well aware of because I was freaking out about doing XC at dusk with my dumb-ass horse who is literally scared of his own shadow.

I was hoping that the delay would actually work out for me as the sun being set would actually make it easier to see. When we walked the course the evening before at 4:15, the sun glare was so bad, I couldn’t even see some of the jumps on approach. 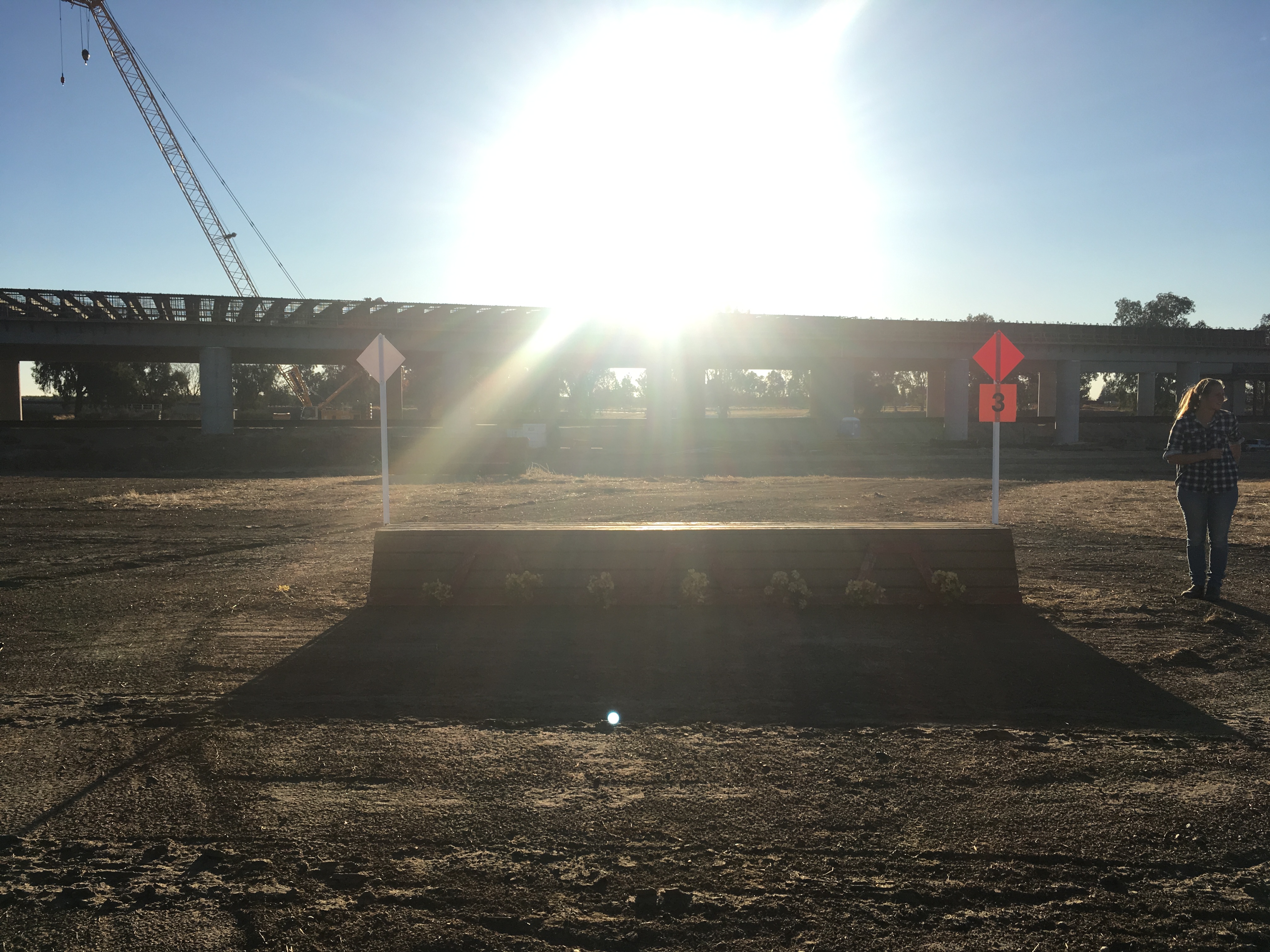 On Saturday, we tacked the two horses up together since it would be easier to take Levi up and let him stand until it was time to warm up than it would be to try to separate him from Eugene. My husband’s round went pretty well except for the part where he forgot until it was too late to turn left for jump #4 and had to do a circle and cross his line incurring a fault.

Since I was on Levi, all the pictures are from Nicole and one of Kate’s students. 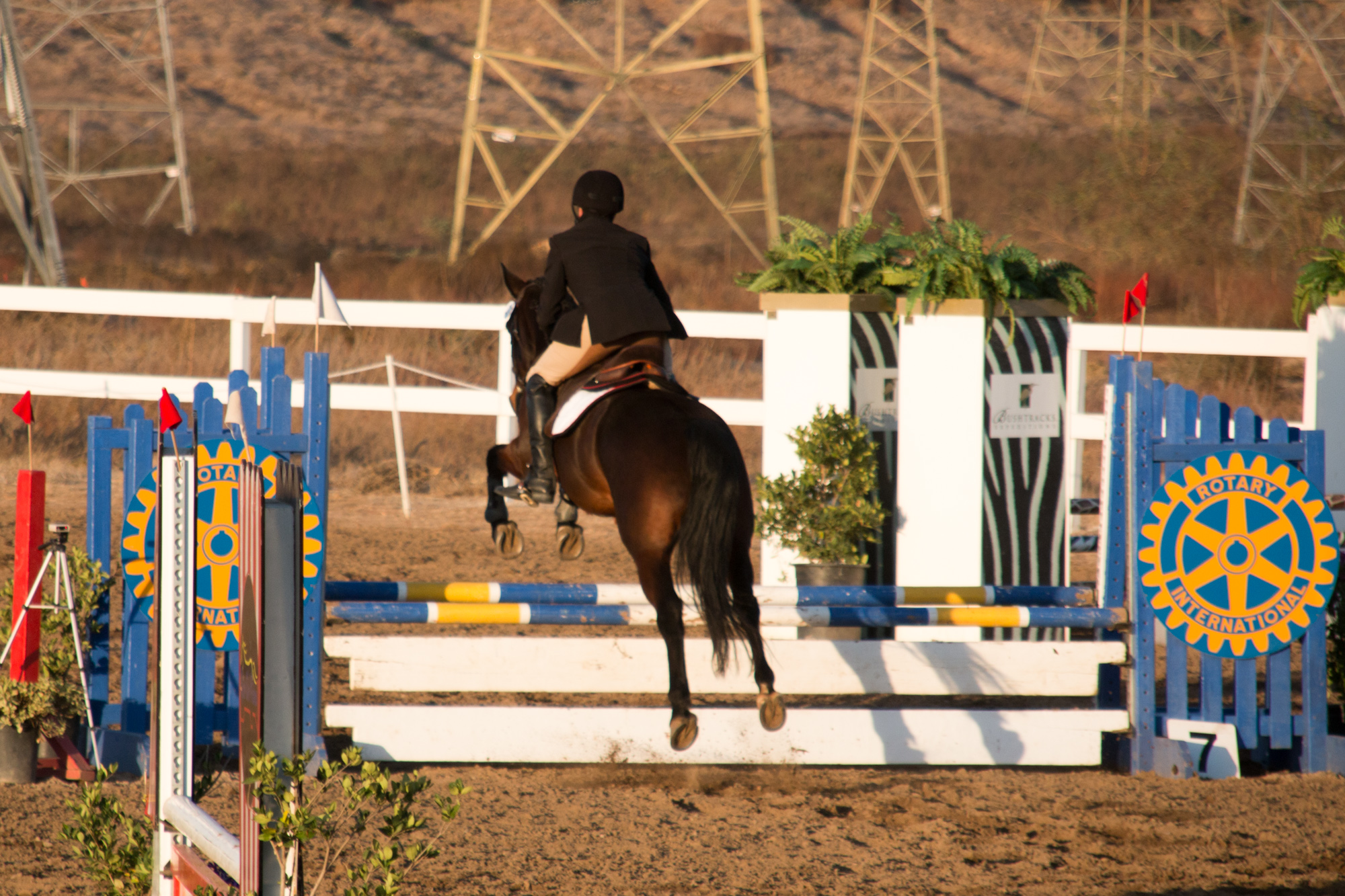 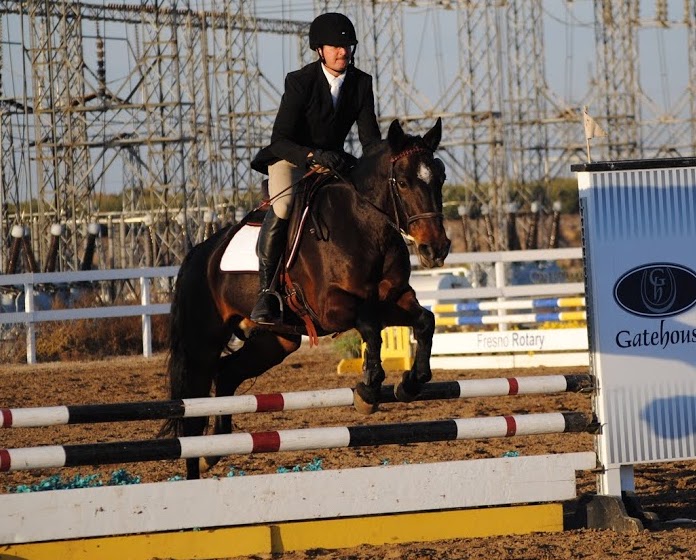 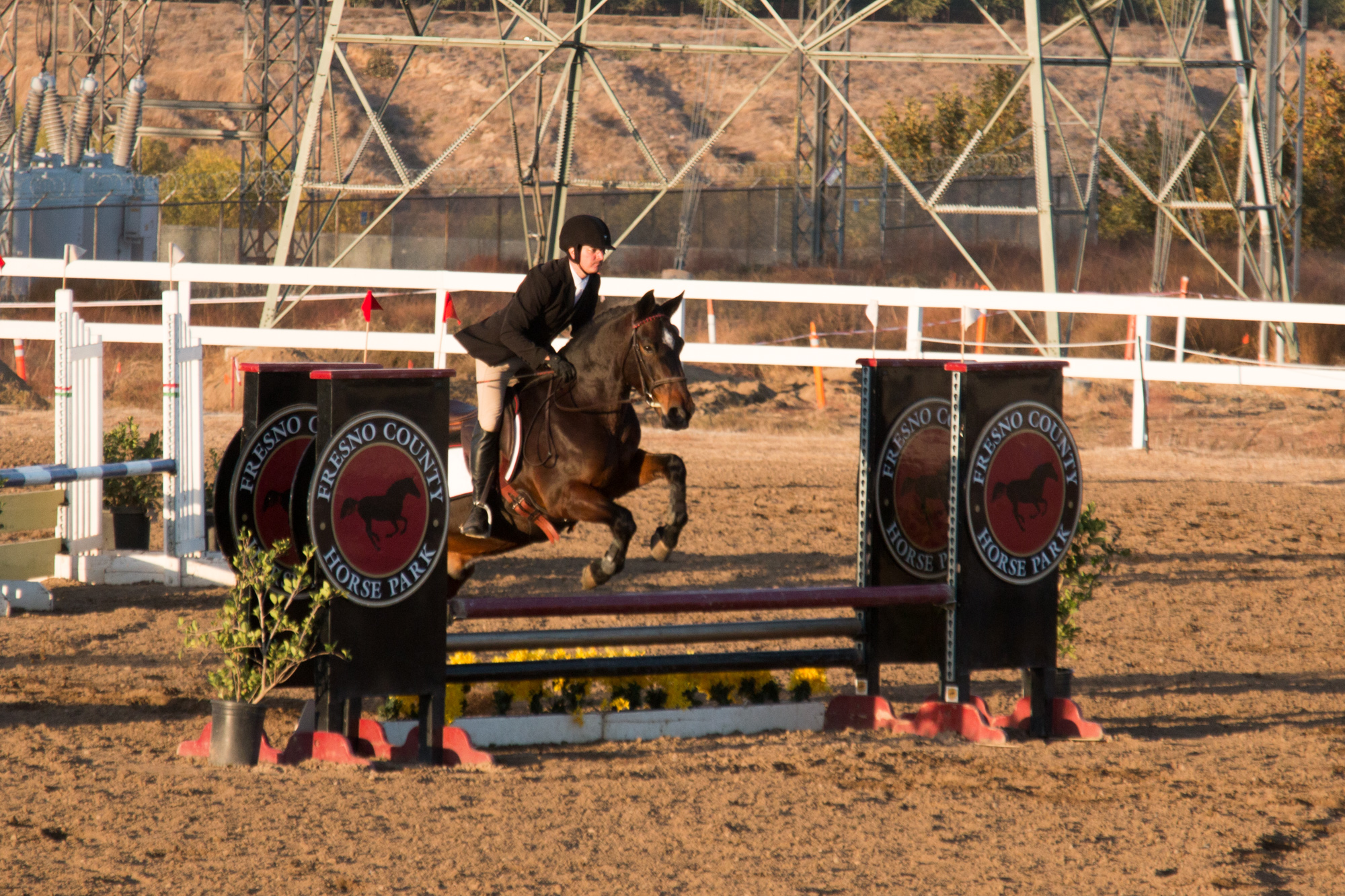 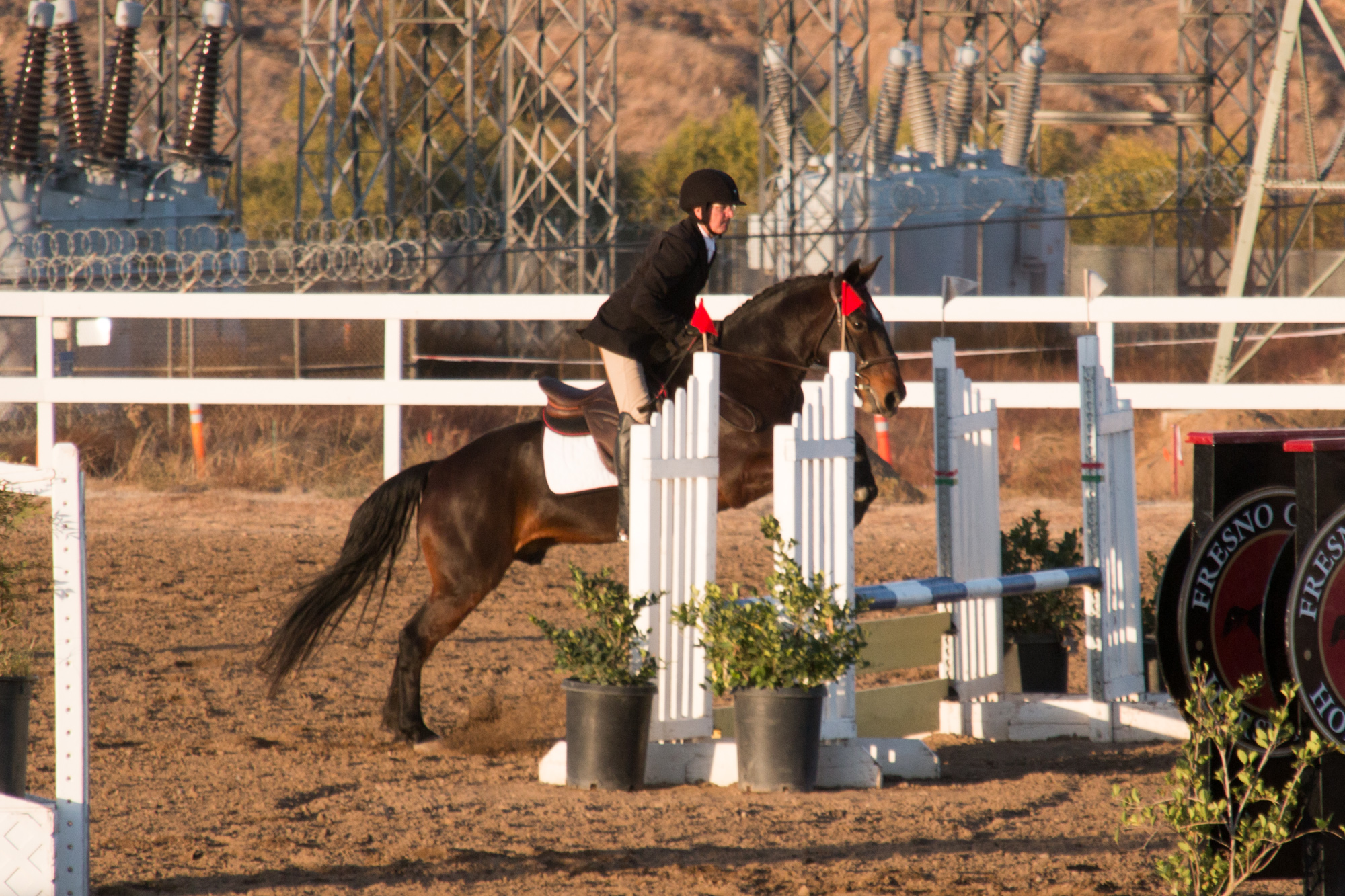 They had one rail at a fence for a total of two faults, which dropped them from 13th to 14th out of 15. Just one rail for Eugene is such an improvement from the beginning of this year. He’s really gotten so much better at stadium.

Once his round ended, we started getting Levi warmed up. Thankfully, Levi was nice and tired for XC. I know that’s not normally how people want to go into a speed event involving solid obstacles, but we were doing intro and I really just wanted him to not bolt around ignoring me so tired was good. The delay made it so that the sun had set a bit more and we could see going towards all the jumps. The coursewalk I did with Kate was at dusk and half the jumps weren’t visible because of the sun glare (see picture above). I did a different coursewalk in the daylight so you can actually see the jumps:

The courses were all really challenging because they reused the courses from Area Championships. The BN course was legit terrifying and, while I was happy I wasn’t doing that, I wasn’t much happier about the Intro course. I was worried about 4 because it was both on a downhill track and also slanted to the side. #10 was immediately followed by a downhill section that I was pretty sure Levi was going to trip on and #12 was a nightmare. Not only was #12 a large fence after a long downhill approach, it had lots of scary brush-esque flowers, which I knew Levi would hate. And the way we approached was going to throw his shadow onto the fences.

I booted him out of the start gate and clucked the whole freaking way to the first jump which he sort of crawled over. I really pushed him between one and 2 to get his ass moving. 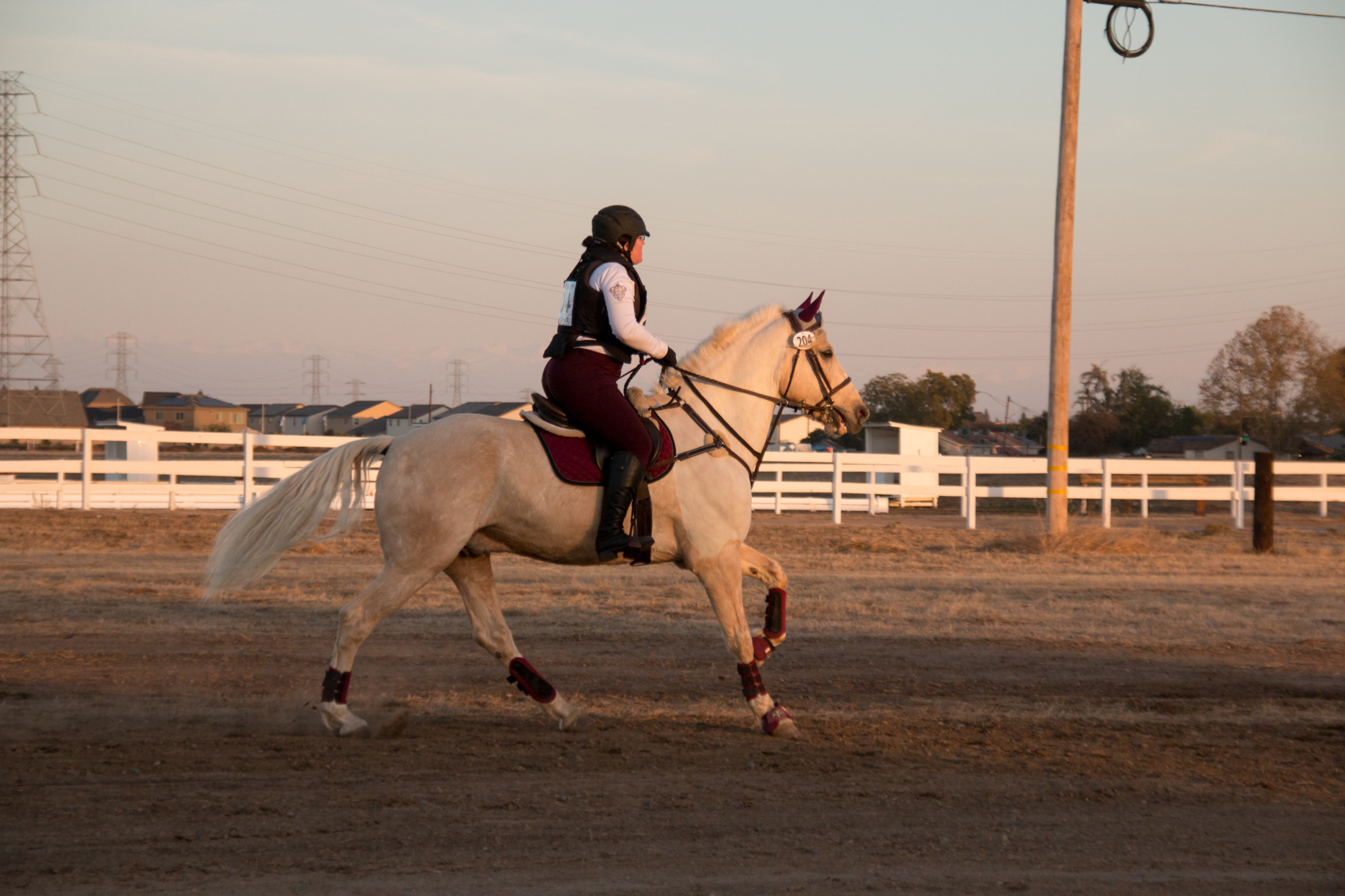 We are so fast. 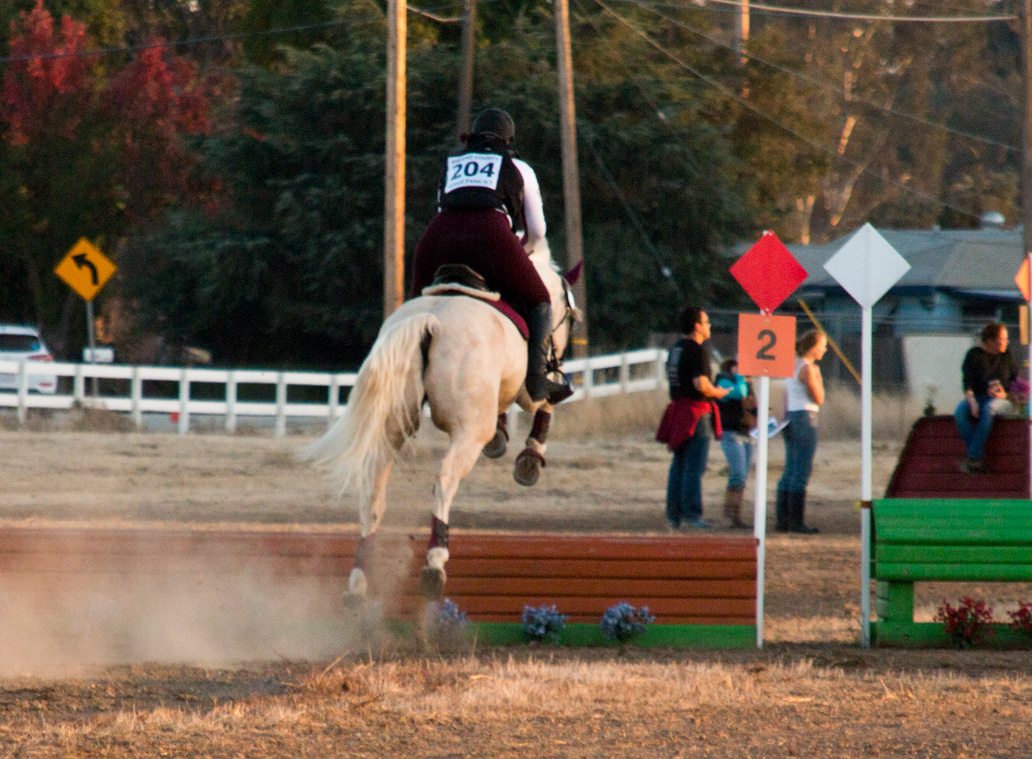 After two, he was very distracted by the horse in front of us who was refusing all of the jumps. When we got to 3 they were being pulled over for us and Levi was like, that horse is going that way, we should go with him. I thought we were going to have a bigger fight, but he took #3 pretty nicely. I had to really ask him to woah going down to #4 because this horse is not good on hills, but he doesn’t know that so slowing down isn’t a concept he wants any part of. 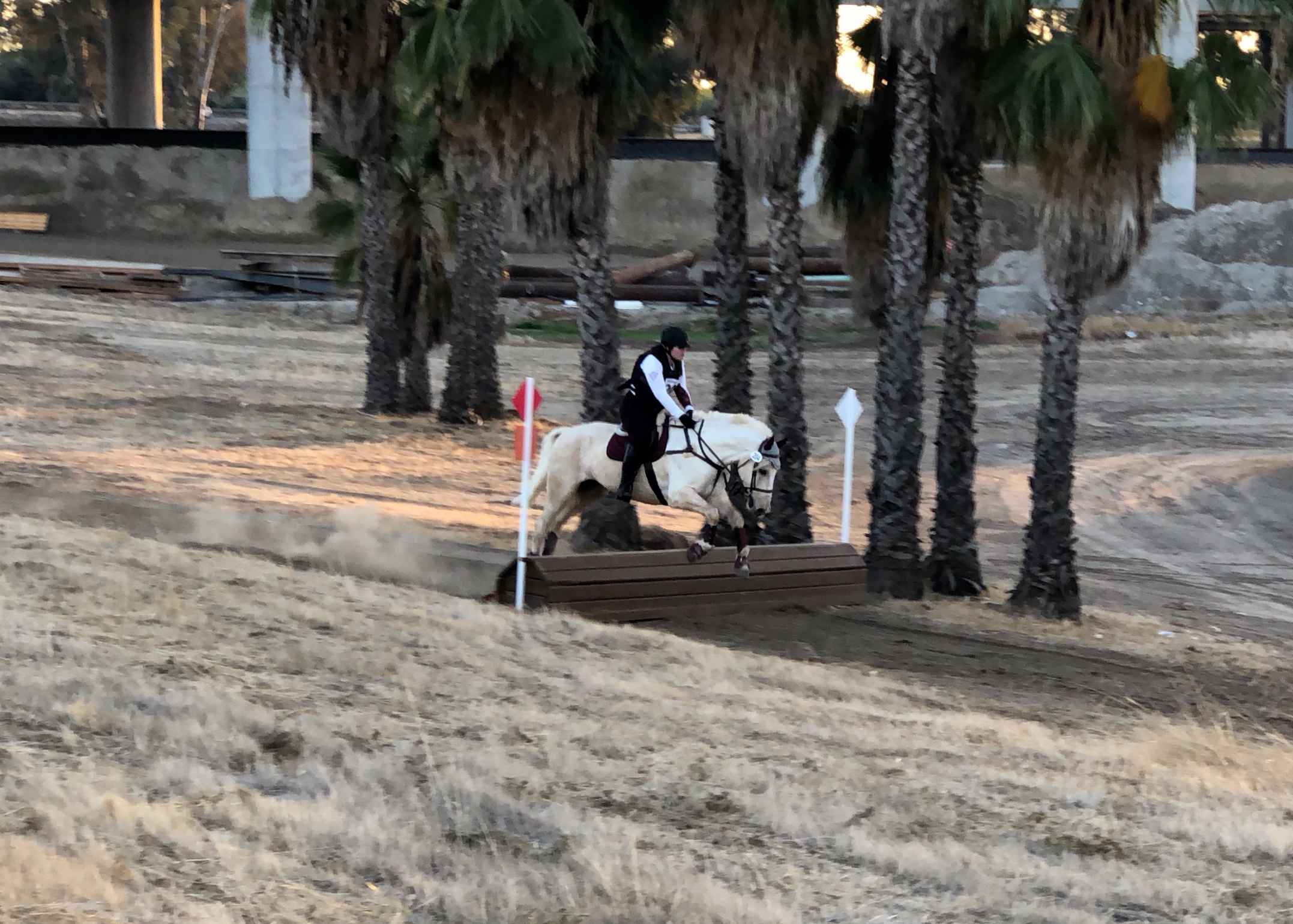 I was surprised with how well #4 went, but then again, it was a small jump to compensate for the terrain. #5 was an enjoyable jump on an uphill with the sun thankfully setting behind the construction instead of blinding us. #6 had an awkward approach, but it was also an easy jump so no problems there. #7 was another easy one and then we had to go through the water to get to #8. Thankfully the water wasn’t flagged because he was not having it. The water level had gone down a bit and left a rim of green that was obviously going to kill him.

He had to skitter left and right and stare at it hard before finally stepping in. Once we got in, I tried to get him moving again because #8 was coming up, but he was scared of the grass ring on leaving the water too. Thankfully #8 was small and easy so we made it over. #9 was a nice, little log and we enjoyed that. I enjoyed not being scared of it and he enjoyed being allowed to go fast. Then we had to slow down for #10 and he didn’t want to do that. Because of the steep decline after #10 I wanted to trot after it, but it was a bit claustrophobic because the path went through the sunken road so I knew I had to get after him to keep him from backing off and refusing #10.

He took #10 nicely, I tried to slow him afterwards, he ignored me and nearly faceplanted. If you watch the video, you’ll hear me telling him to “stay on your feet.” This is why I wanted to trot. I made him trot almost all the way to #11 and he though that was stupid, but took the jump nicely. 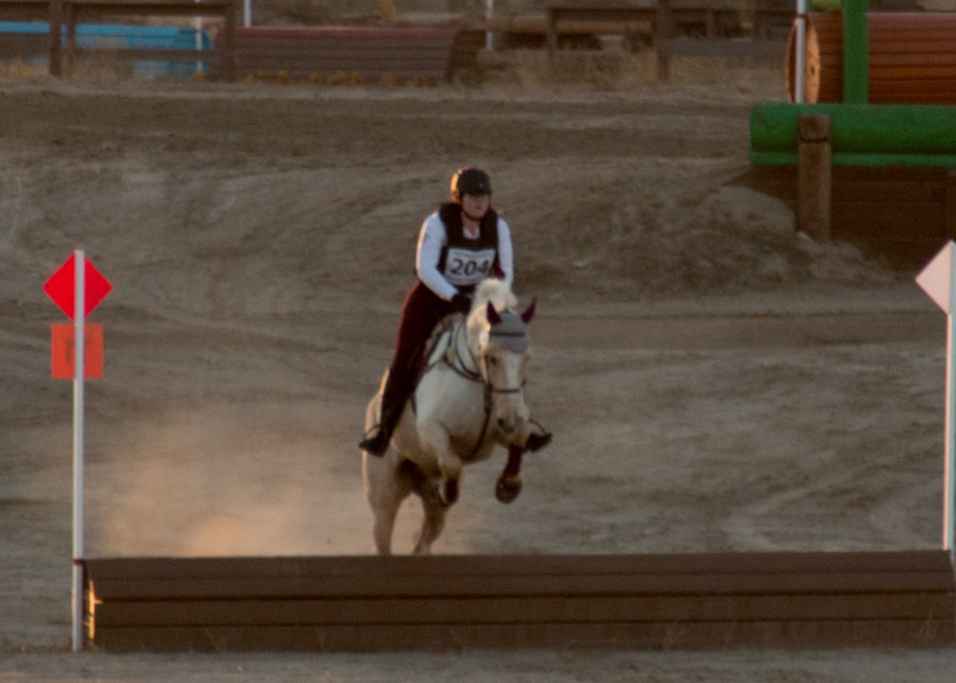 Coming down the hill to #12, I struggled between wanting to bring him back to a trot because he’s just so clumsy, but wanting momentum to the jump I knew he was going to be scared of. In walking the course, Kate and I had discussed taking a slanted approach and coming down to the left then going right towards the jump. That way his scary shadow would be on the left and he’d be moving away from it to go over the jump. As we started going down the hill, I noticed that – because we were so delayed – the sun had set enough that his shadow wasn’t showing up. Well, I thought it wasn’t showing up. When we walked the course, our shadows were showing up in front of the line of jumps at 12.  When we were coming down the hill, I didn’t see the shadows there and thought we were fine so I corrected back to a straight approach. I didn’t notice his shadow chasing us, but he did. You can see the ear flick:

That was enough to distract him and then the jump was scary with all the flowers sticking out of it kinda like spaced out brush. Shockingly(!), my yelling “go go go” at him had no effect and he spun out: 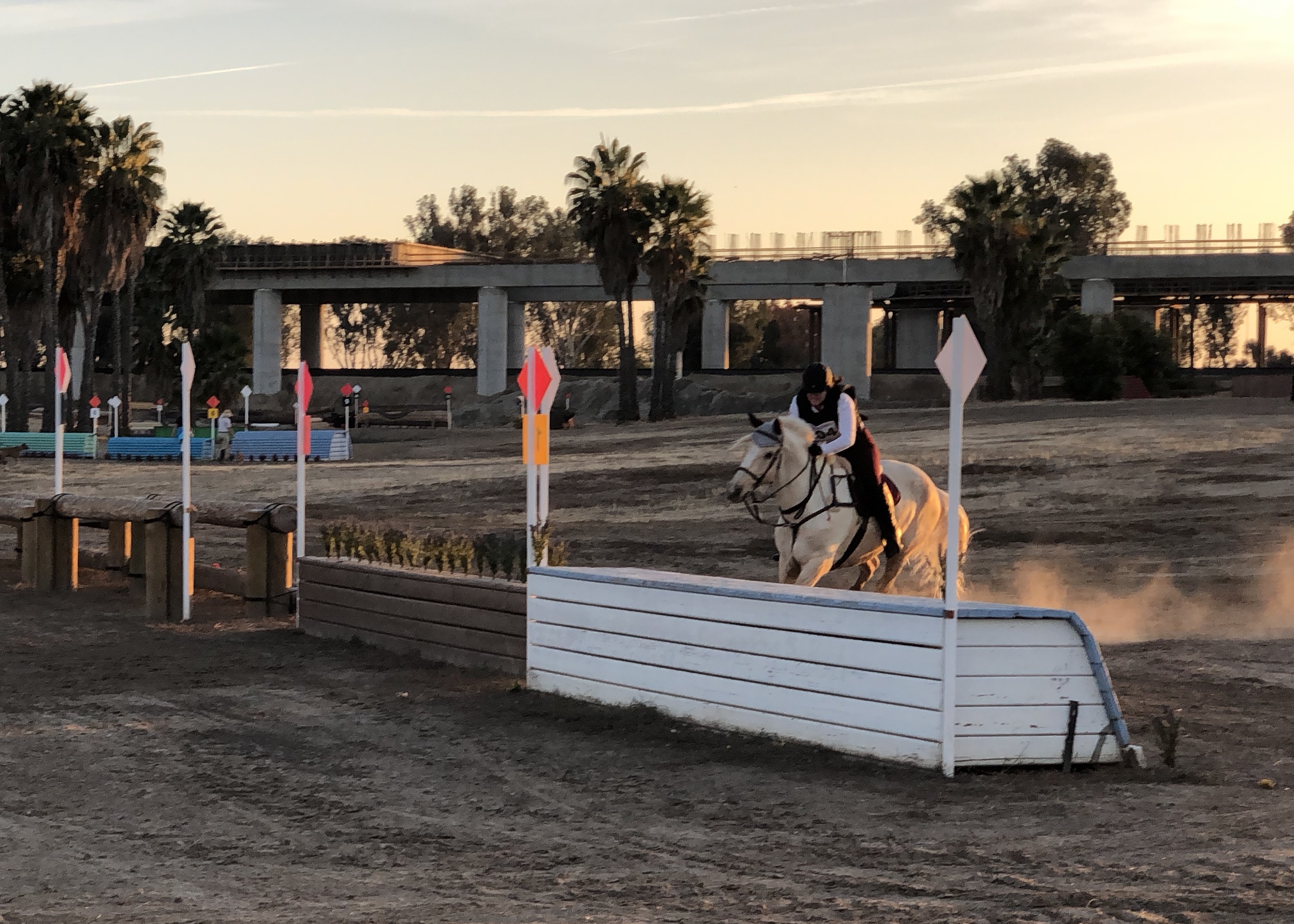 We had an argument about listening, walked a bit, did a giant circle, and then I pushed him hard at that jump. I actually still thought he was going to refuse and wasn’t really prepared for just how much he over-jumped it. 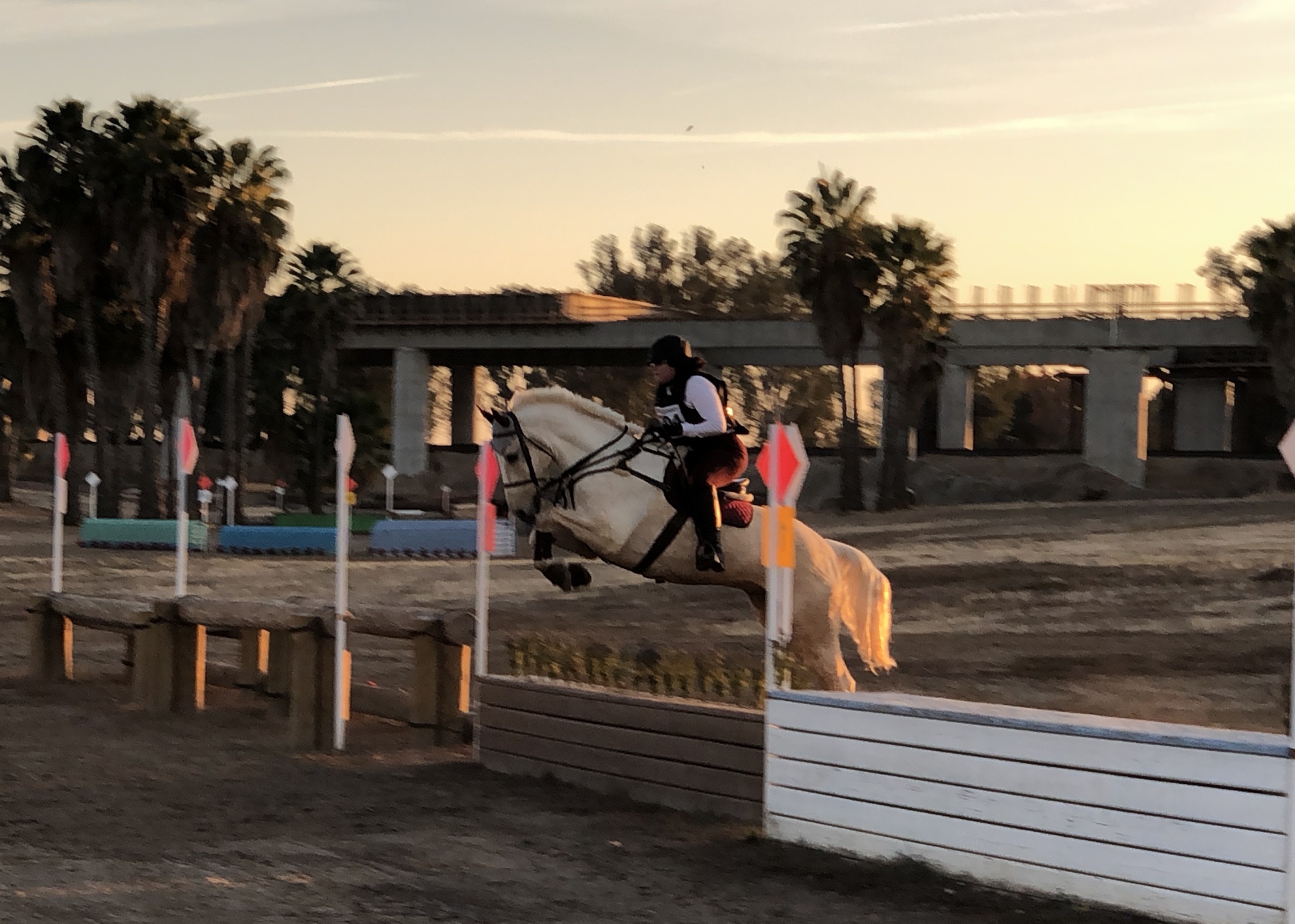 You might think we’d never practiced a brush jump before, but we own one. He does this every time. He has to make sure to not only NOT touch the brush, but clear it by a few feet too just in case. I don’t know what it’s “in case” of, but he’s not gonna find out.

We raced up the hill from #12 and flew right over #13. I couldn’t see my watch because of my shirt so I had no idea what my time was but we had trotted parts and had a refusal and walked and trotted a giant ass circle following that refusal so I was pretty sure we were over time. I ended up getting speed faults for coming in 4 seconds too early. In hindsight, my video which does not include the countdown has me crossing the finish line at about 4:40. I suppose I could have argued the penalties, but it hardly mattered in the face of the 20 points for the refusal. We did move up from 12th to 10th due to other people having even worse rounds.

I fully expected to get eliminated on XC so one refusal was pretty great. I even felt like I had some modicum of control over him for most of the course. I knew #12 was going to be a problem and was honestly surprised we got over it with just one refusal. I