On Sunday we had to be up bright and early to get packed up at the hotel and get to the horse park with time to get Levi ready for our stadium round at 9:00. Thankfully, Levi was clean and his mane hasn’t regrown enough to be braidable so I didn’t have much to do. As an additional bonus, he was exhausted and we had a really quiet warm up. I was having to push him just to keep him moving and he was sort of half heartedly plopping over jumps. Perfect!

Then we went into the arena, came around the turn towards the first jump and he squealed. Honest to cod, squealed. I wish I’d had the cambox on for that. 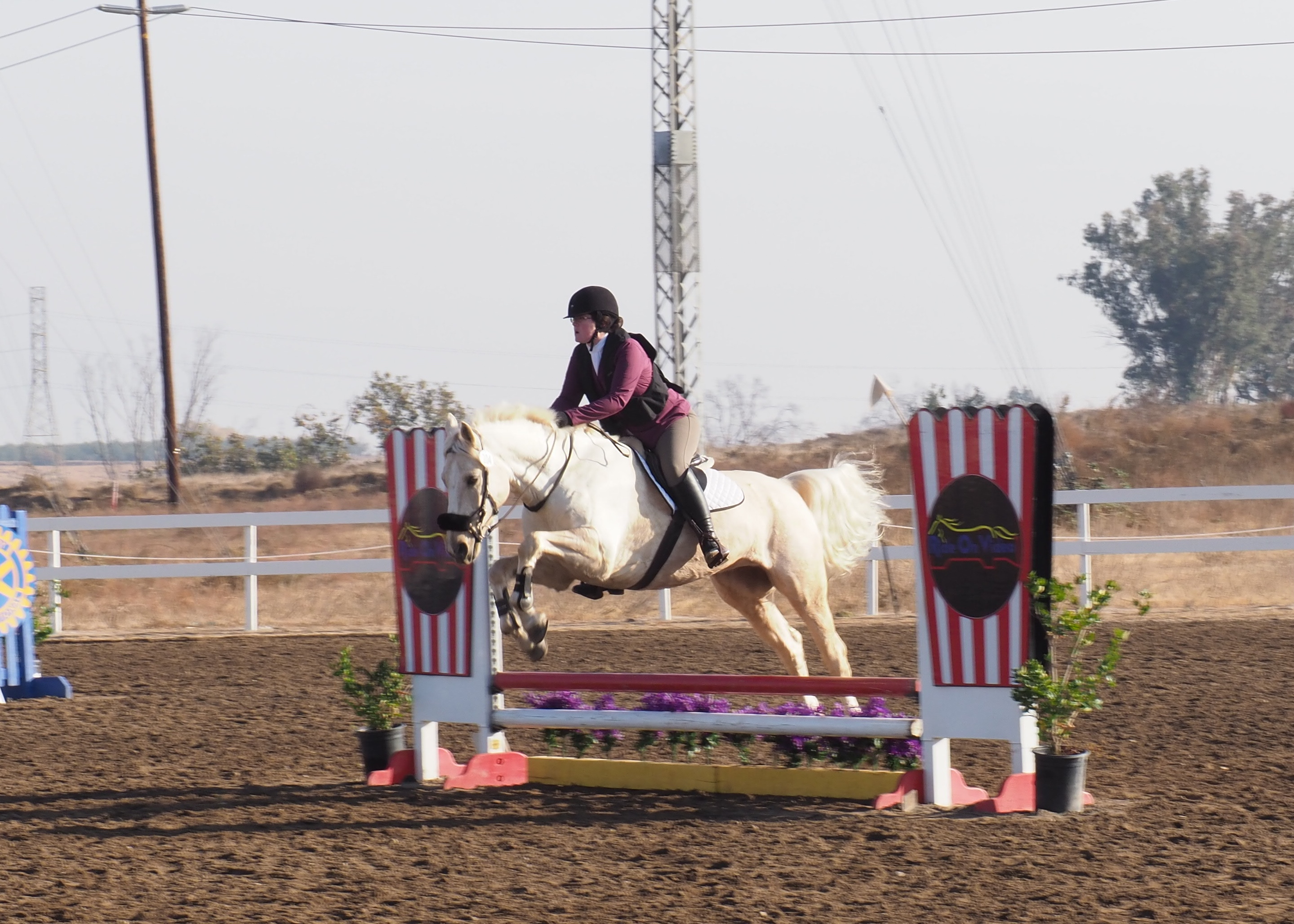 Apparently it was game time and he wanted to go fast. Ha ha ha. Just kidding. He can’t go fast. He gets all amped, but still manages to cover very little ground. 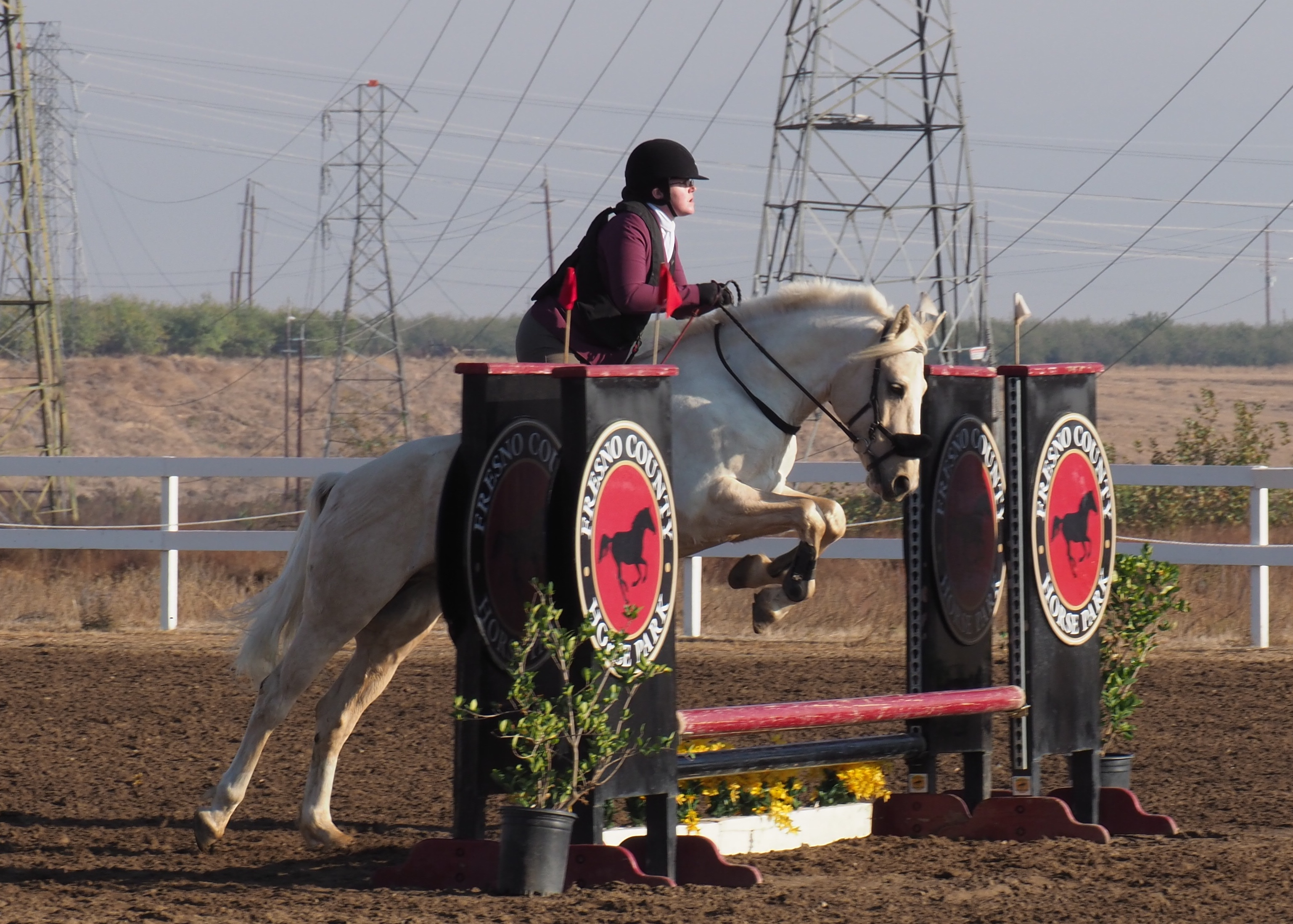 He didn’t want to listen to me regarding slowing down to swap leads or really listen to me much at all, but the jumps were all tiny, so it didn’t really matter. 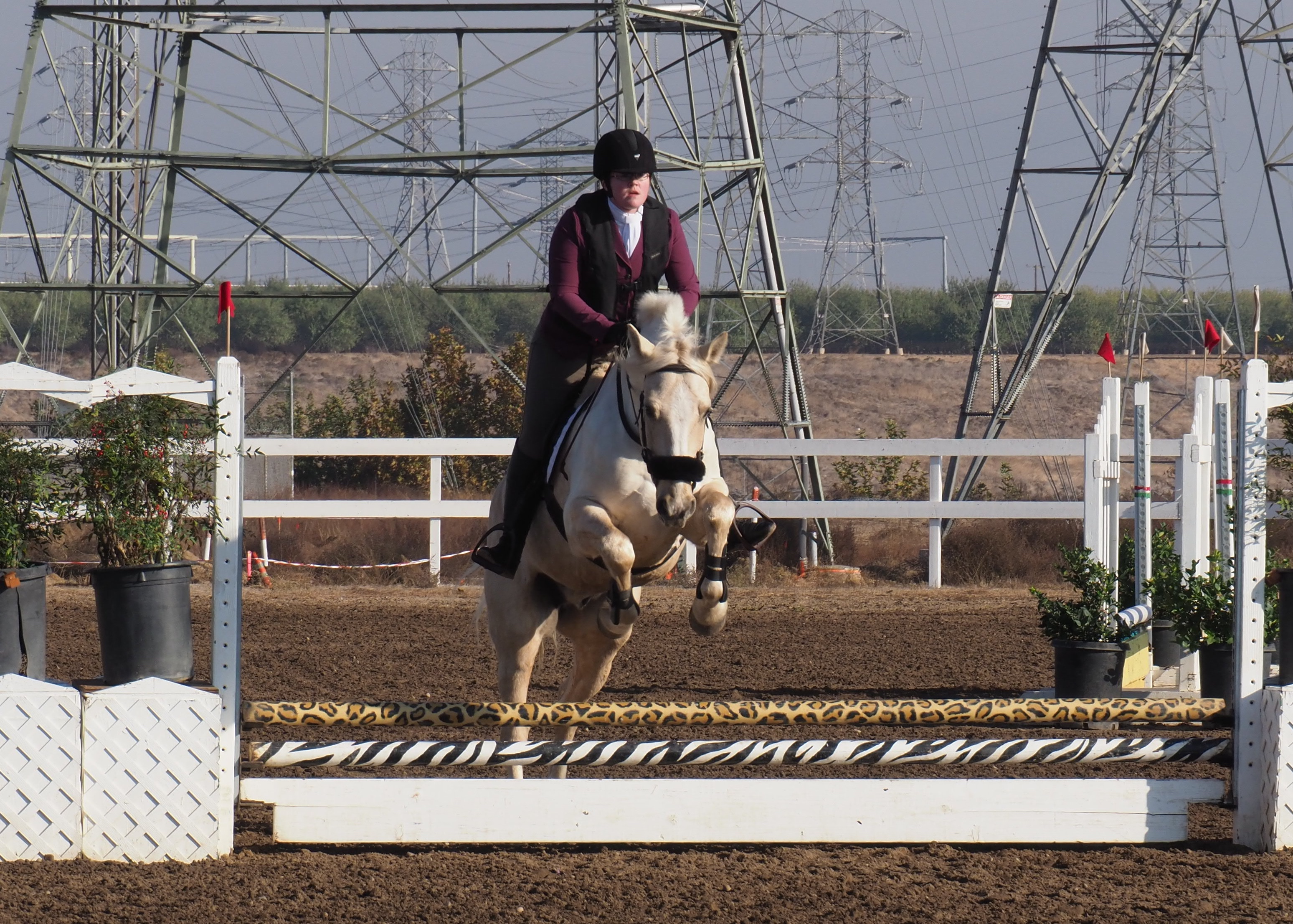 By the end, he wasn’t even trying to jump them, just loping over them: 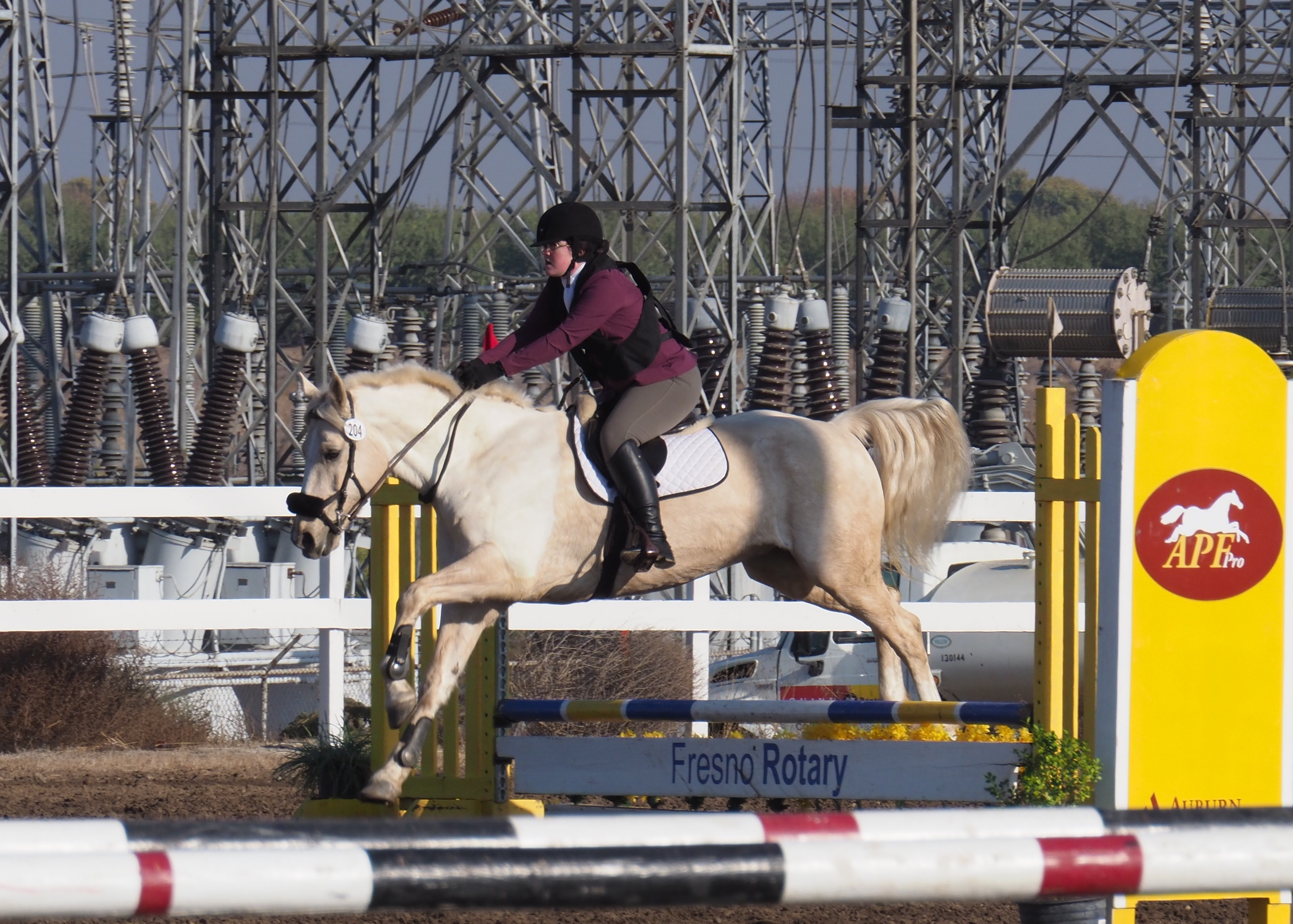 We were clear on jump faults, but managed to accrue 2 time faults, because, as I mentioned, he is not fast. We were out of the ribbons so we left before the awards and I took him down to his stall. We had a ton of time between my round and my husband’s, which we used to start packing up and getting ready to go. We also walked the course one more time.

The BN cross country course was pretty intense since they were re-using the championships course. Some of the jumps were quite big and really looked like novice jumps to me. Thankfully I wasn’t doing them.

My husband, unlike me, was super excited to do the course. He likes challenges and Eugene is a really rock-steady cross country horse. That little Mustang just jumps whatever he’s pointed at. 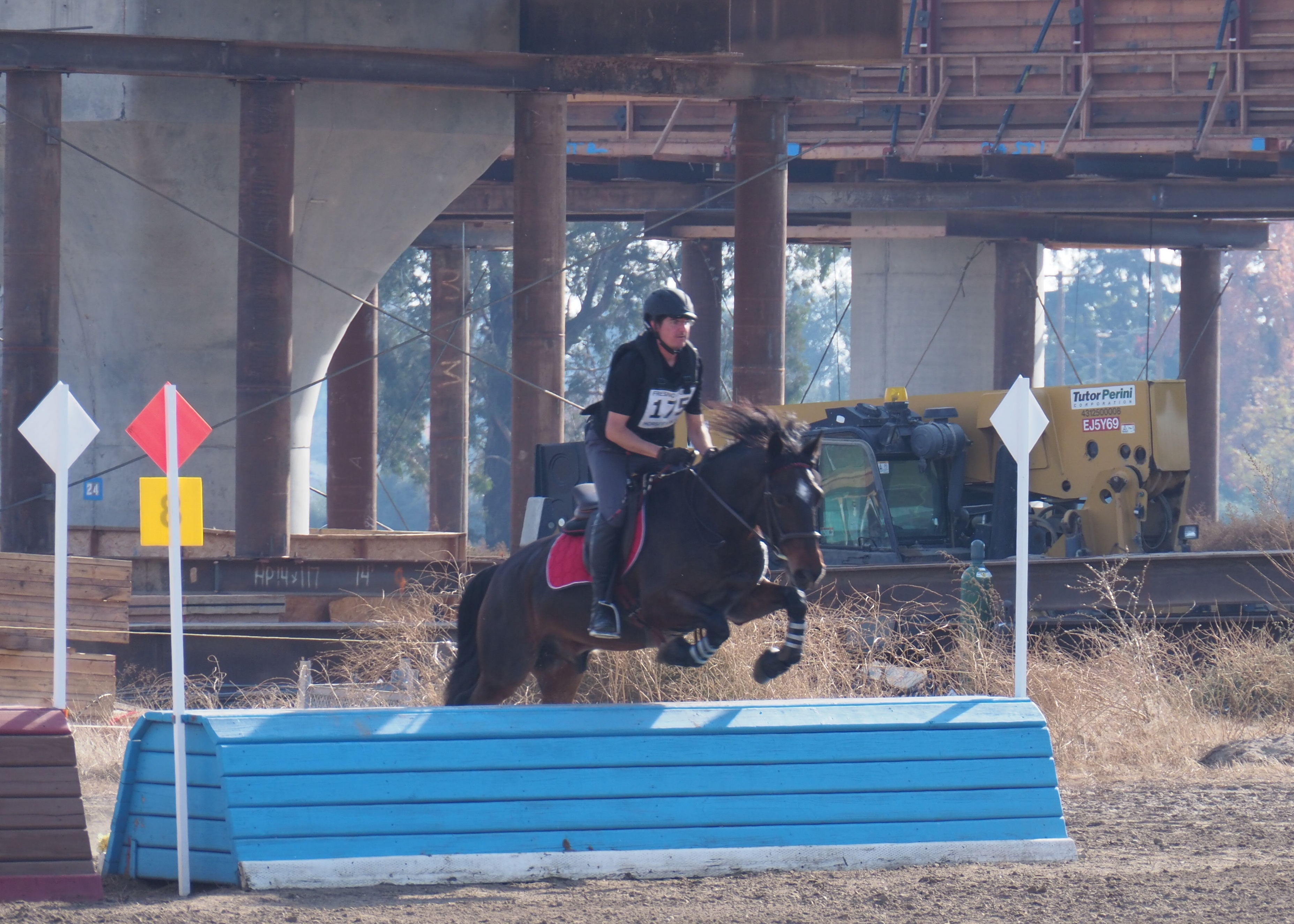 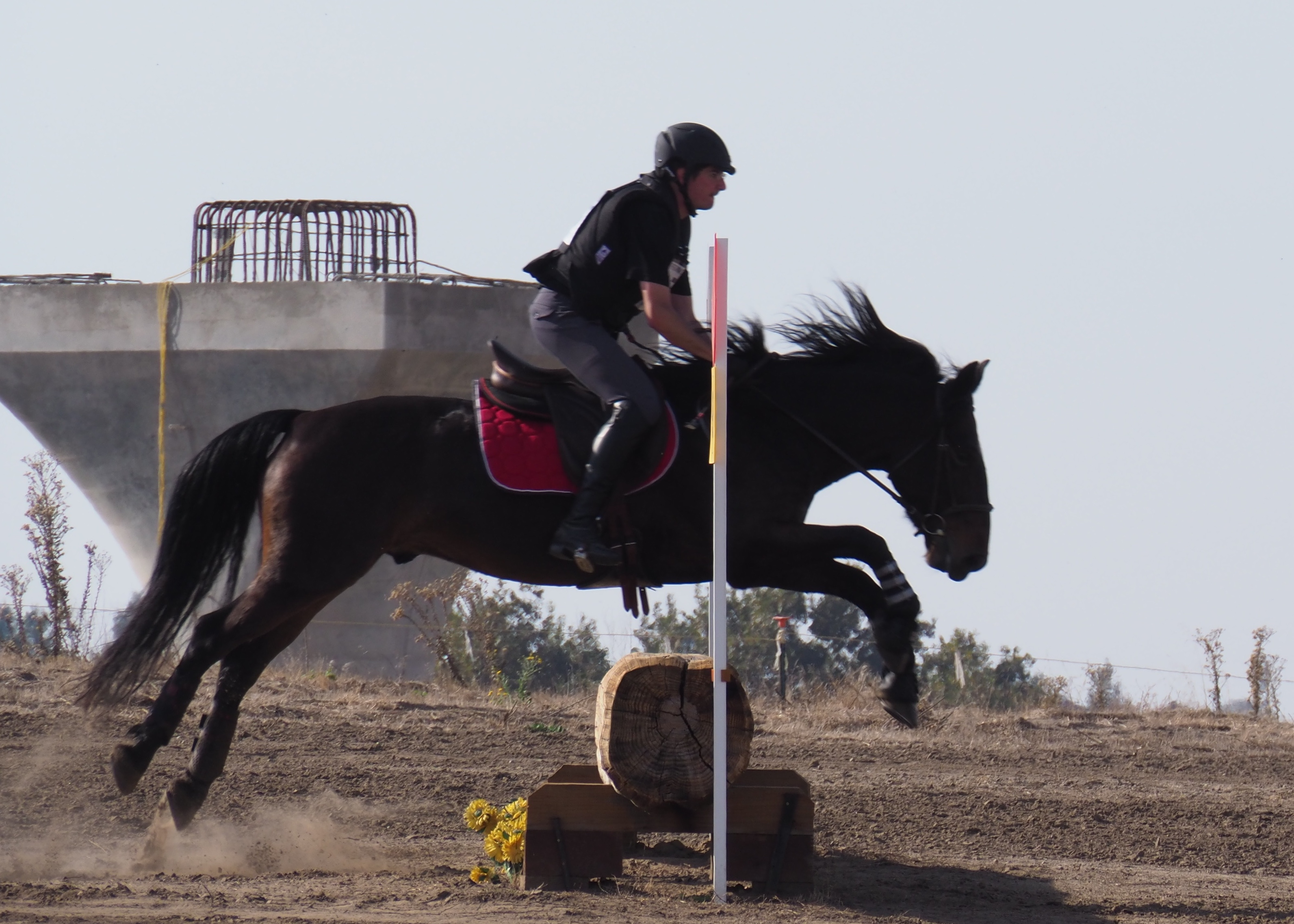 Even this massive bank at 12 that was only a few stride to a log at 13. 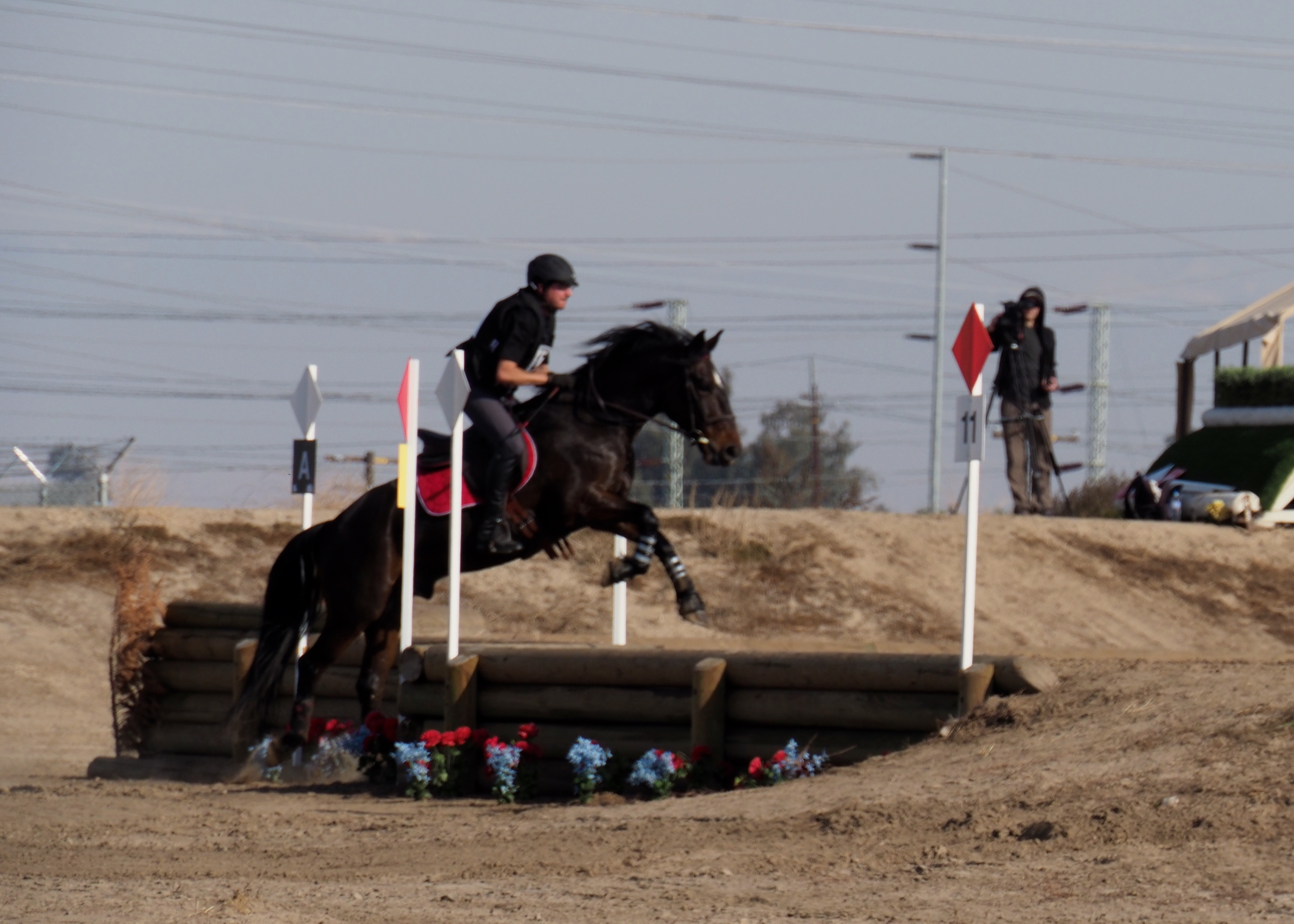 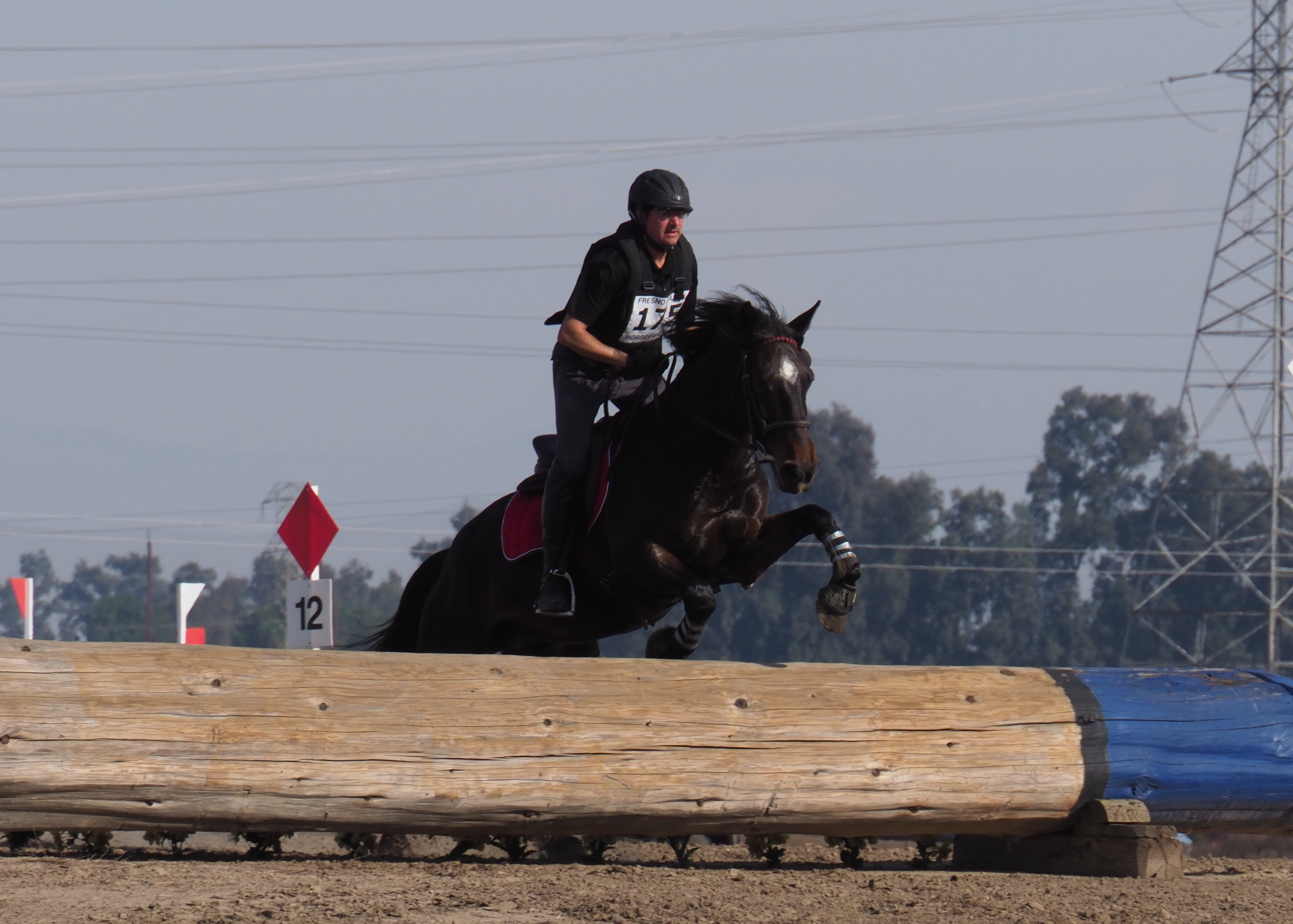 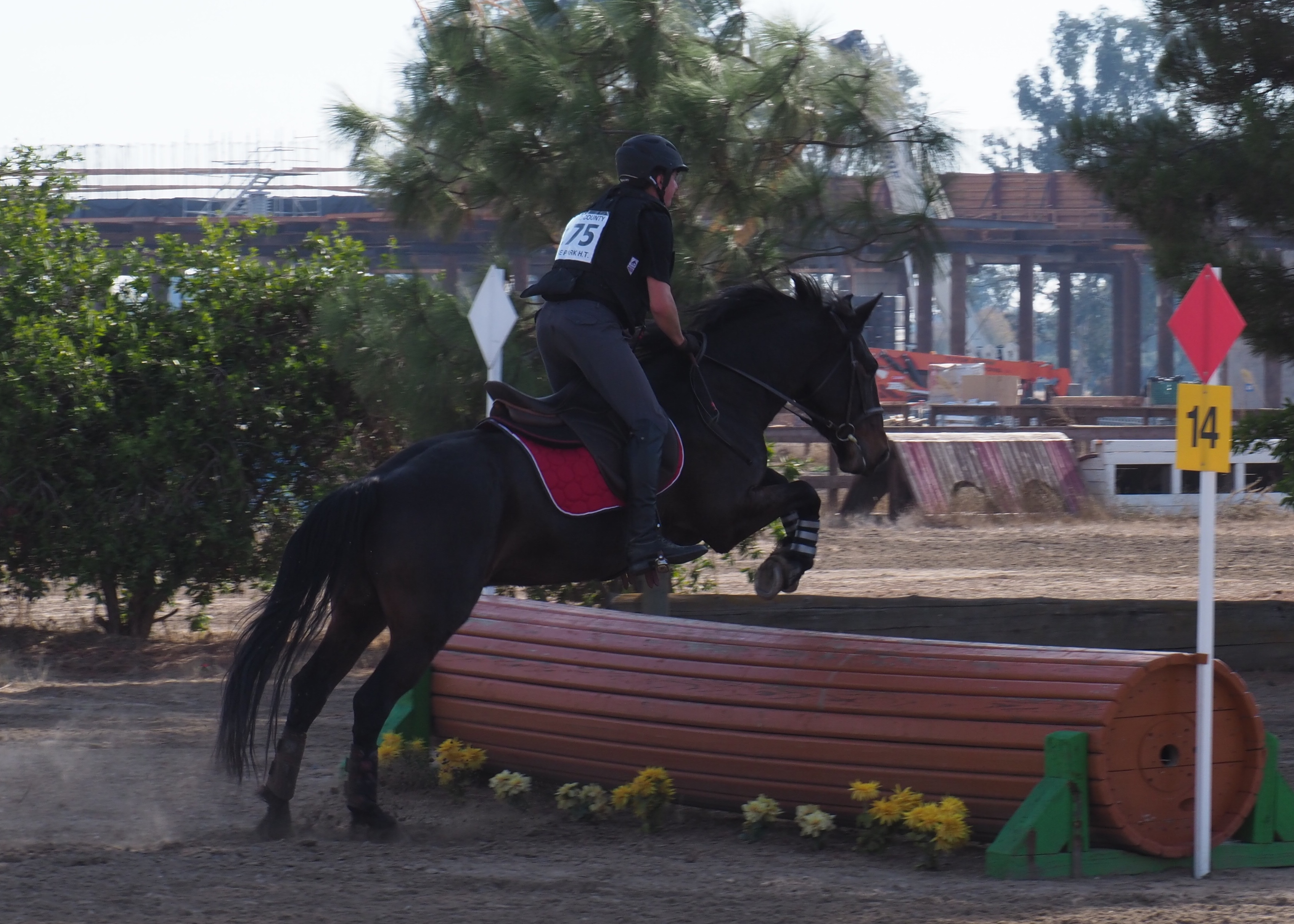 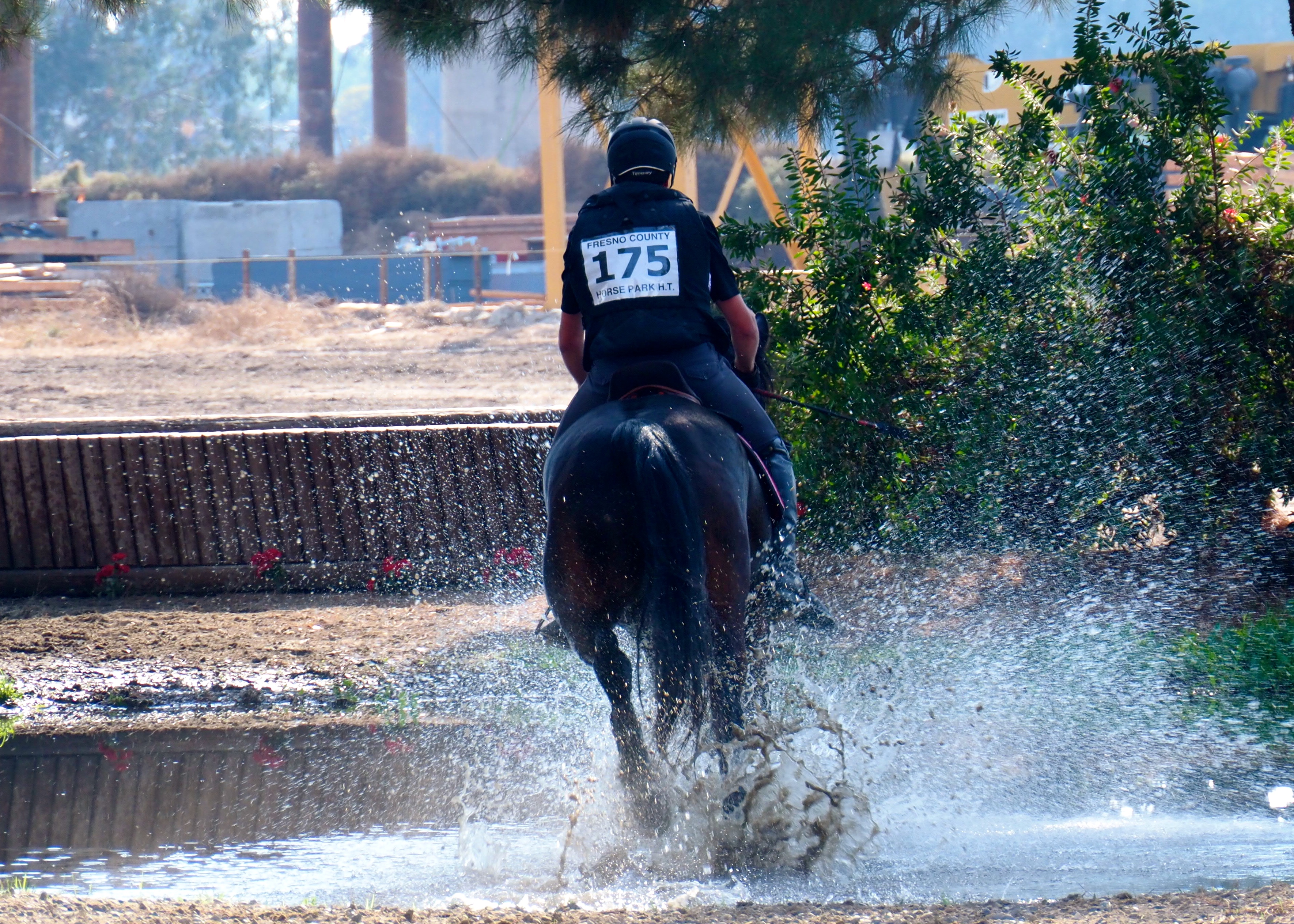 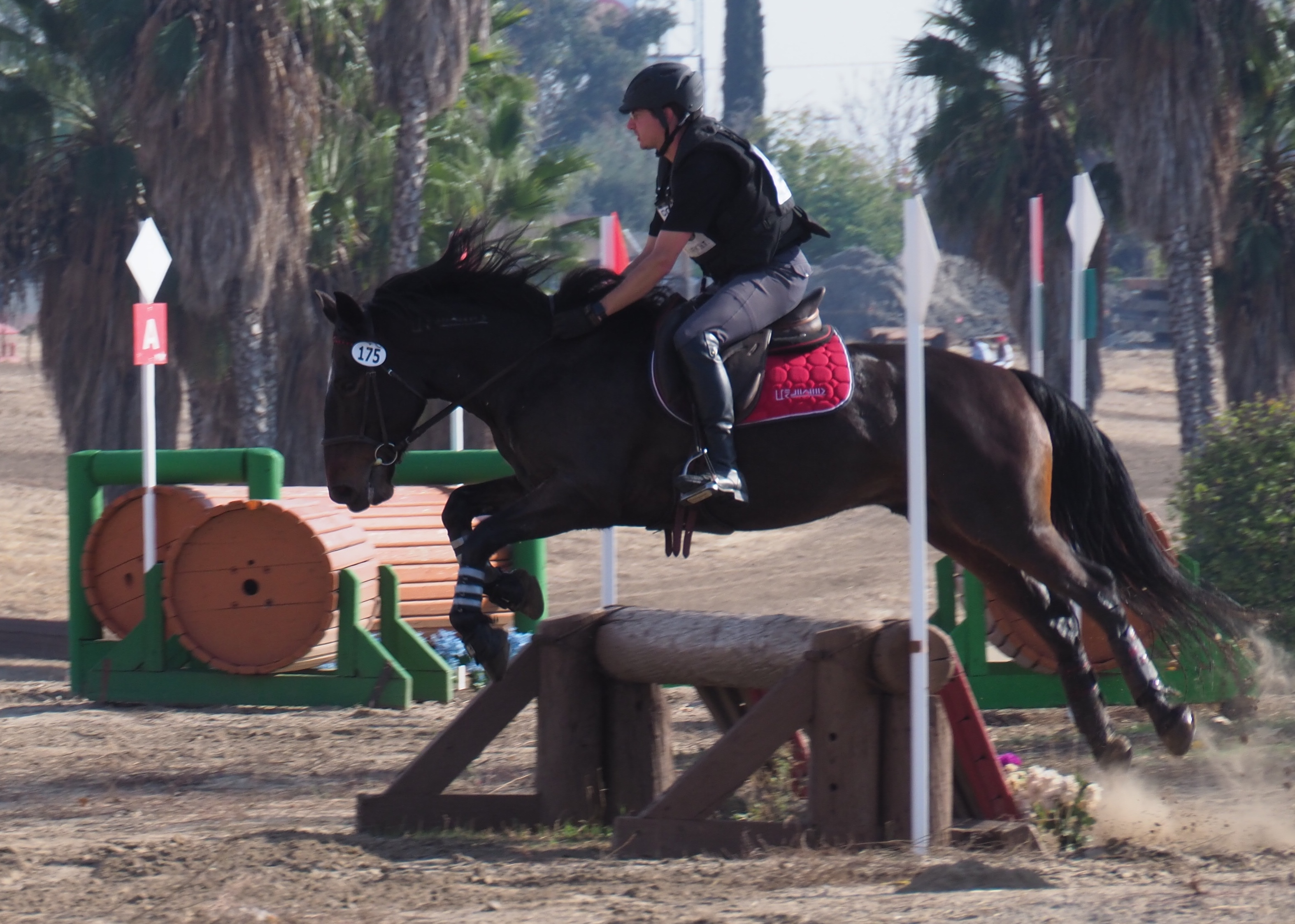 I was scared of the table at #17. It was next to #12 that Levi and I had issues at and it was massive. But Eugene doesn’t care about terrain. This horse is a trail pro and the most sure-footed horse I’ve met. He just ran down the hill and jumped the huge table without a problem. 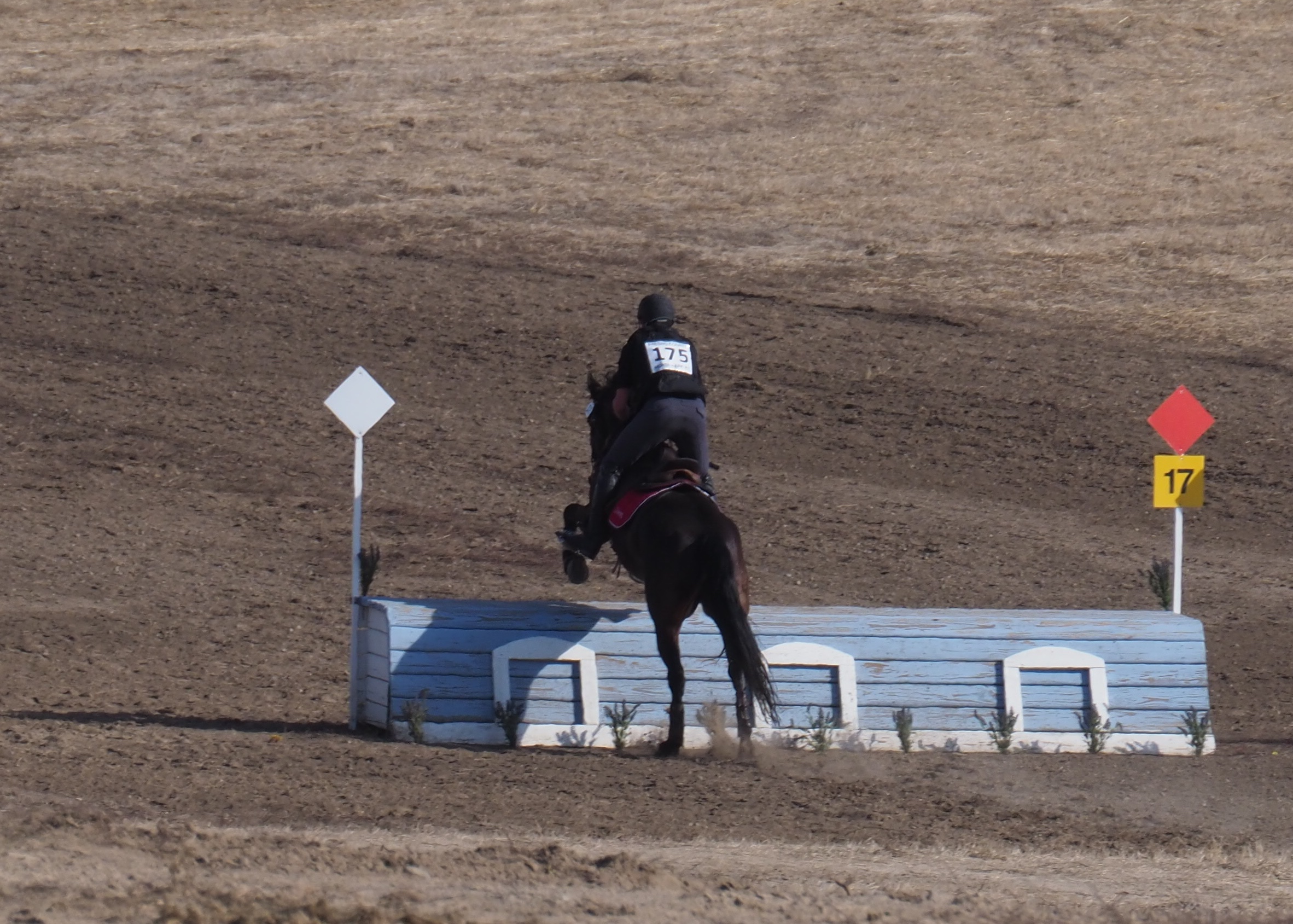 And marched across the last jump to finish double clear. 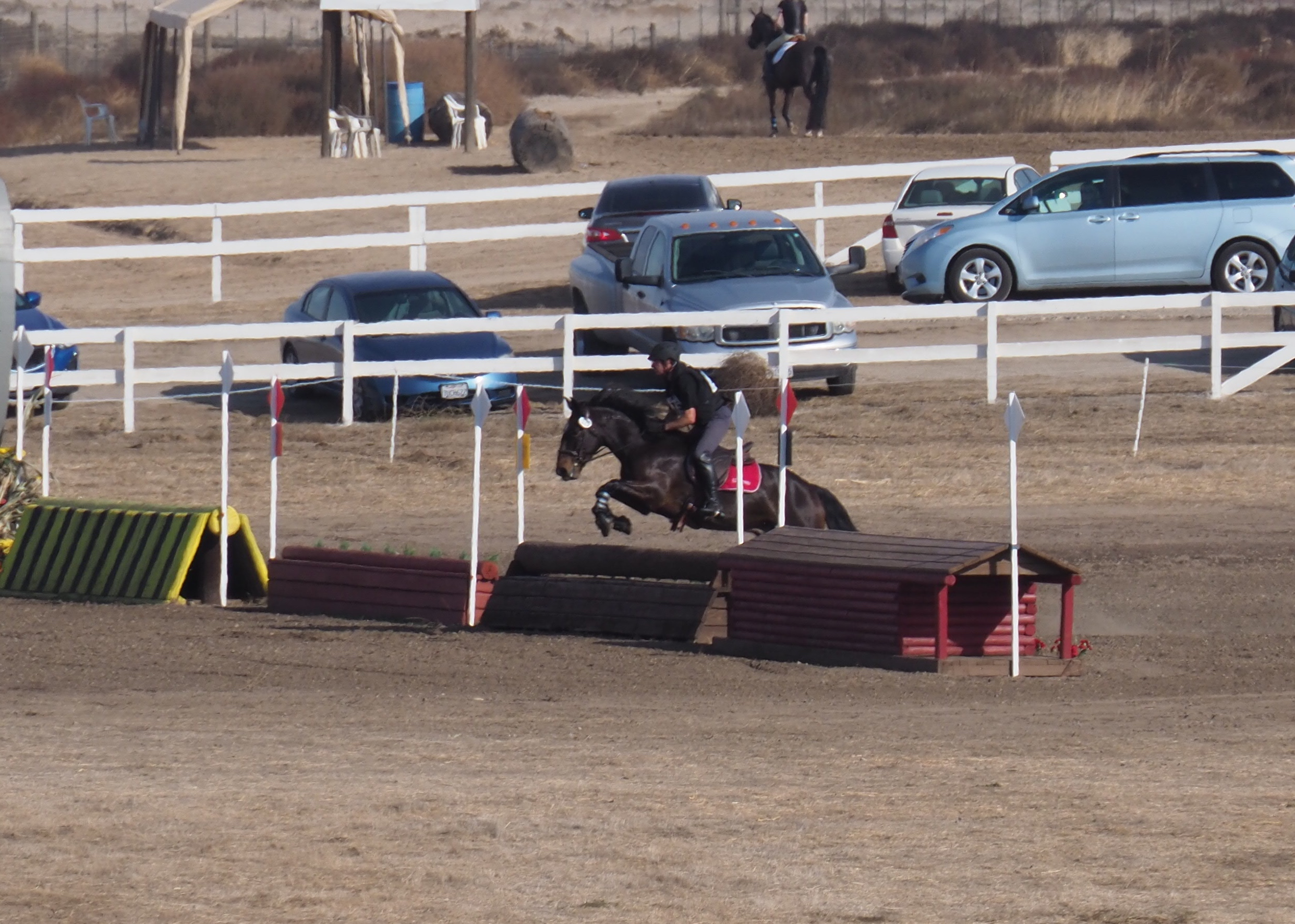 Man, he’s such a good little horse. They did end up taking the option at the ditch. Eugene has never had a refusal on an actual course, but he has refused really wide ditches like this when schooling so it seemed like the safer option. At 3:12 in the video you can see him bend his head down to stare at the ditch as they go by so I think that was the right call.

Going clear brought them up from 14th to 12th place. Sadly still out of the ribbons, but 12/15 is the best finish they’ve done a rated event and the whole weekend was an improvement over the beginning of the season. Little Mustang has come a long way from his first Intro schooling event this spring. Especially if you consider that he spent a few months rehabbing from his stifle injury.