Saturday we were up bright and early to feed the ponies and braid Eugene before dressage. They were doing Novice B for the first time at a rated event. Sadly, we’ve lost both of our dressage tests for the first week, so coverage is going to be purely based on pictures and fading memory. They did get a 35.2, which is their best score at a rated event. 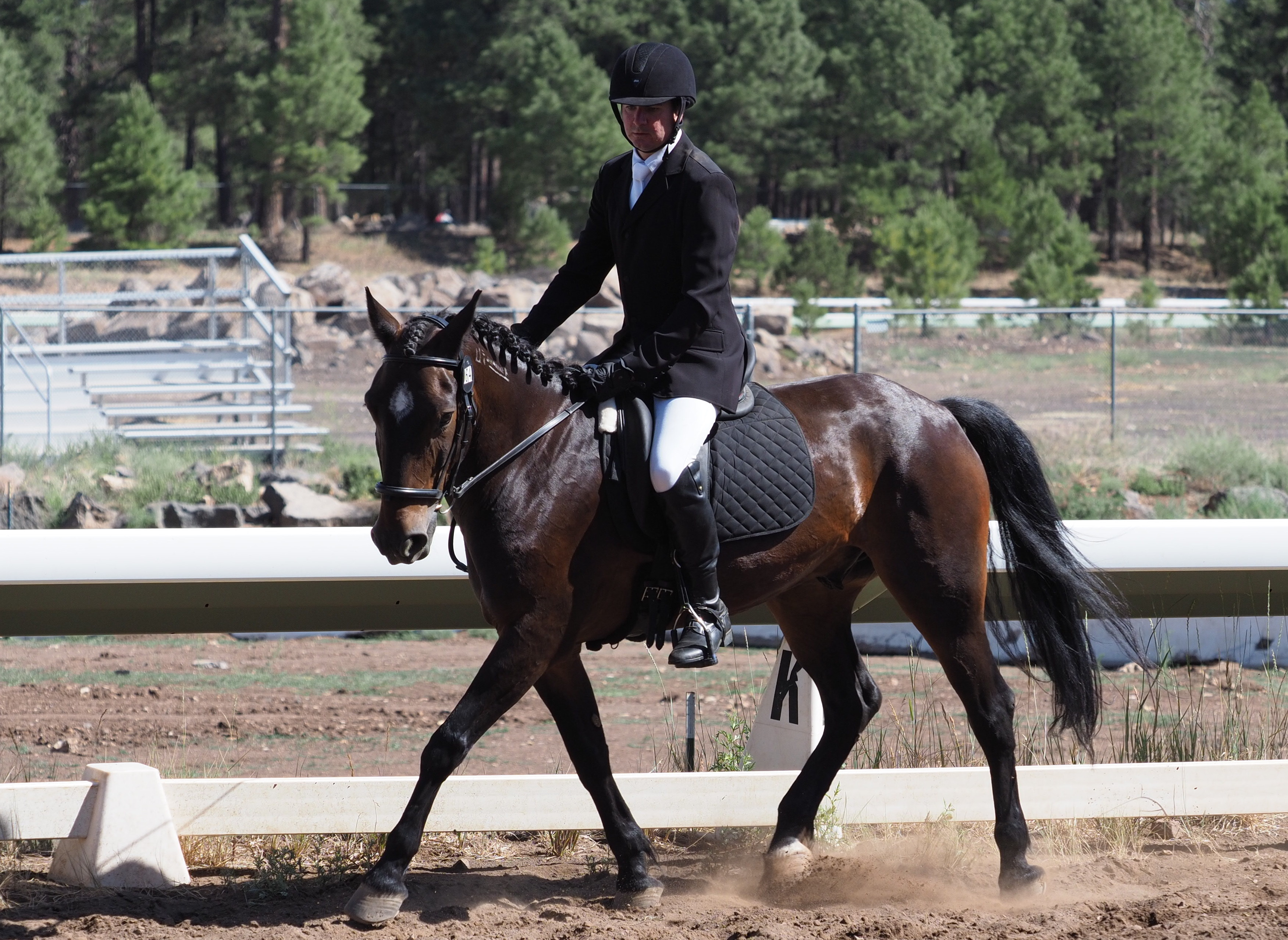 The left trot to canter transition was a little rough, but they did get the correct lead. 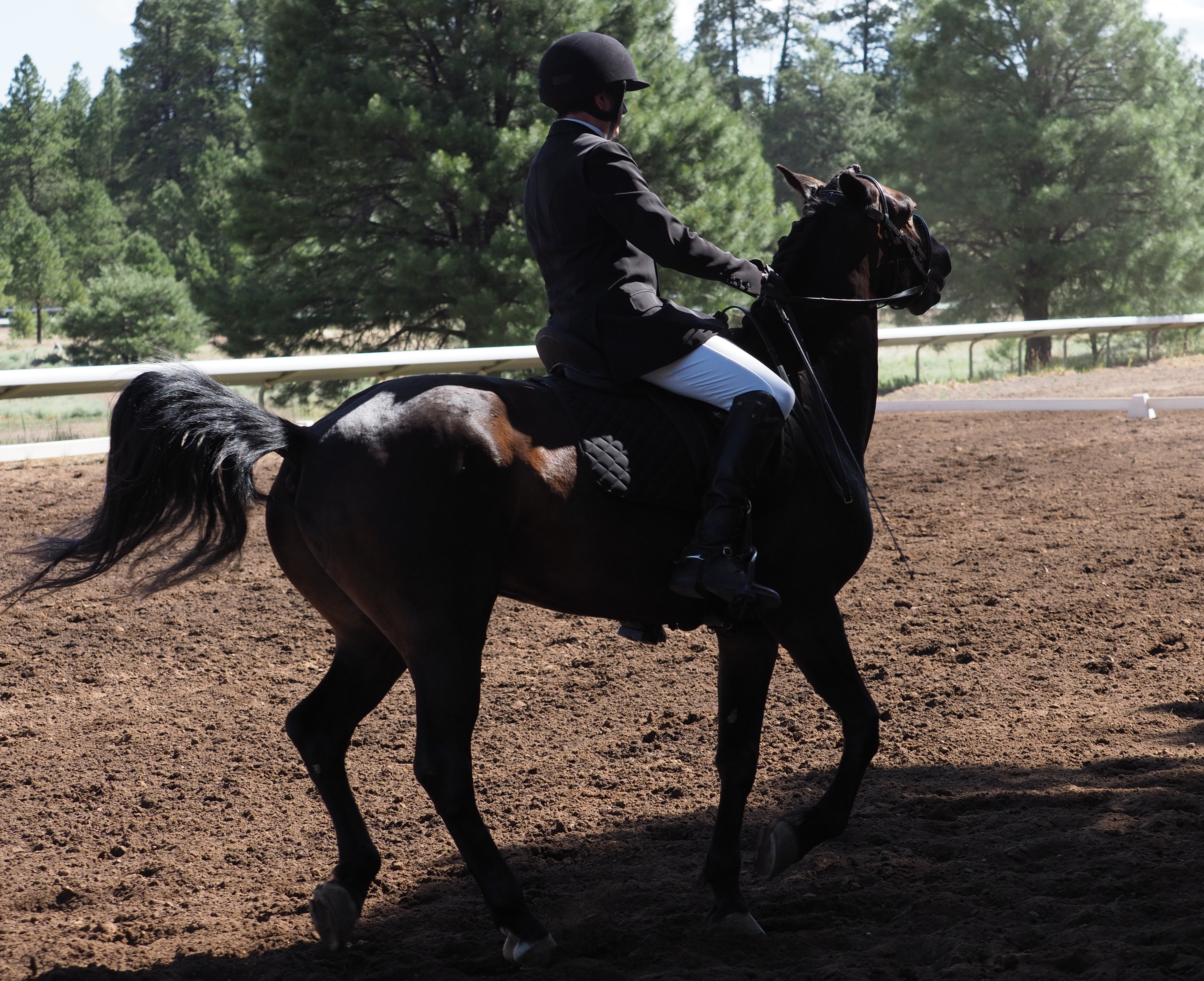 Once the transition was over, the left lead canter looked pretty good. 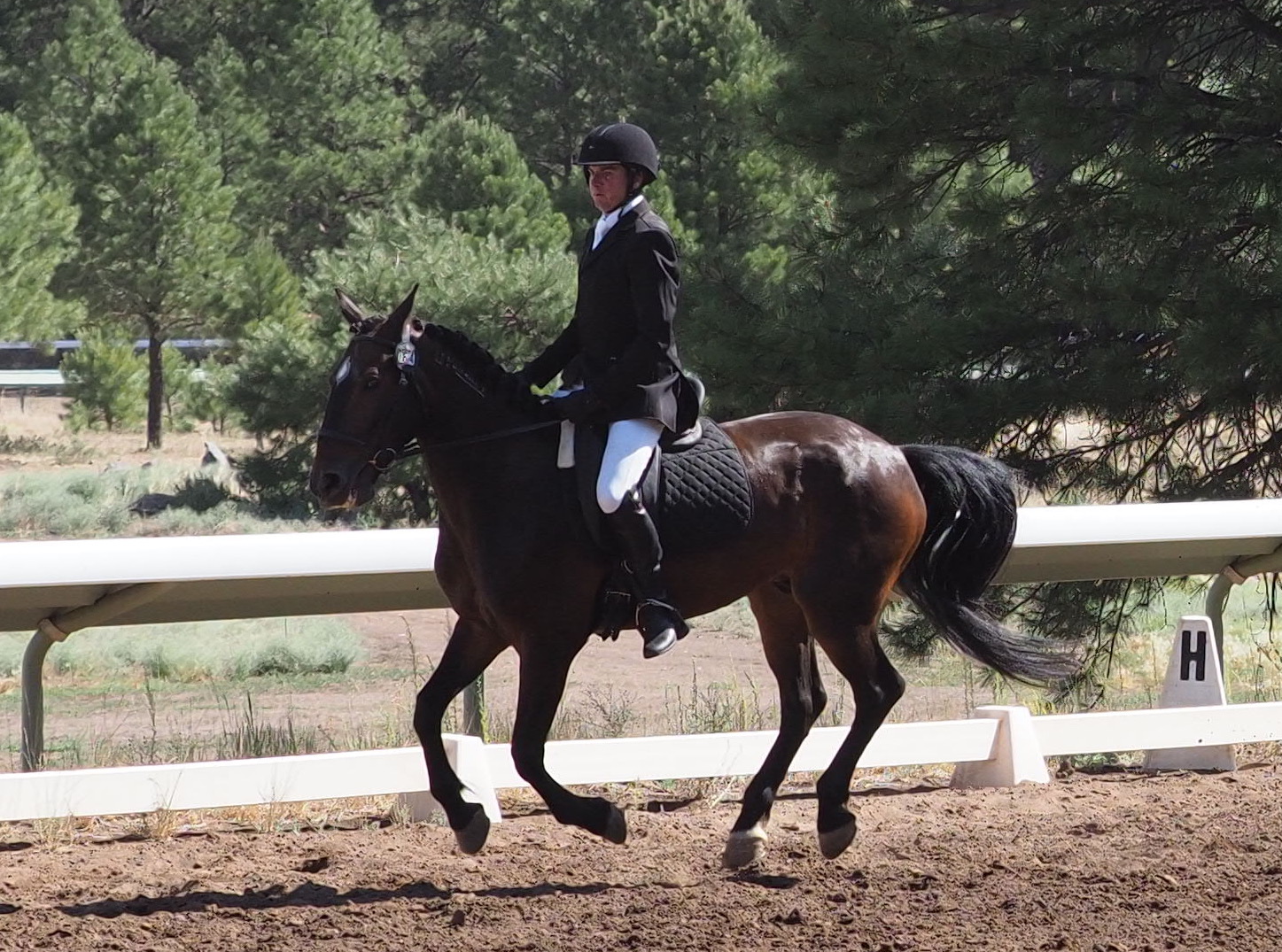 The stretchy trot in Novice B is really hard for Eugene. He hasn’t fully grasped the concept yet, but this was one of their better attempts. 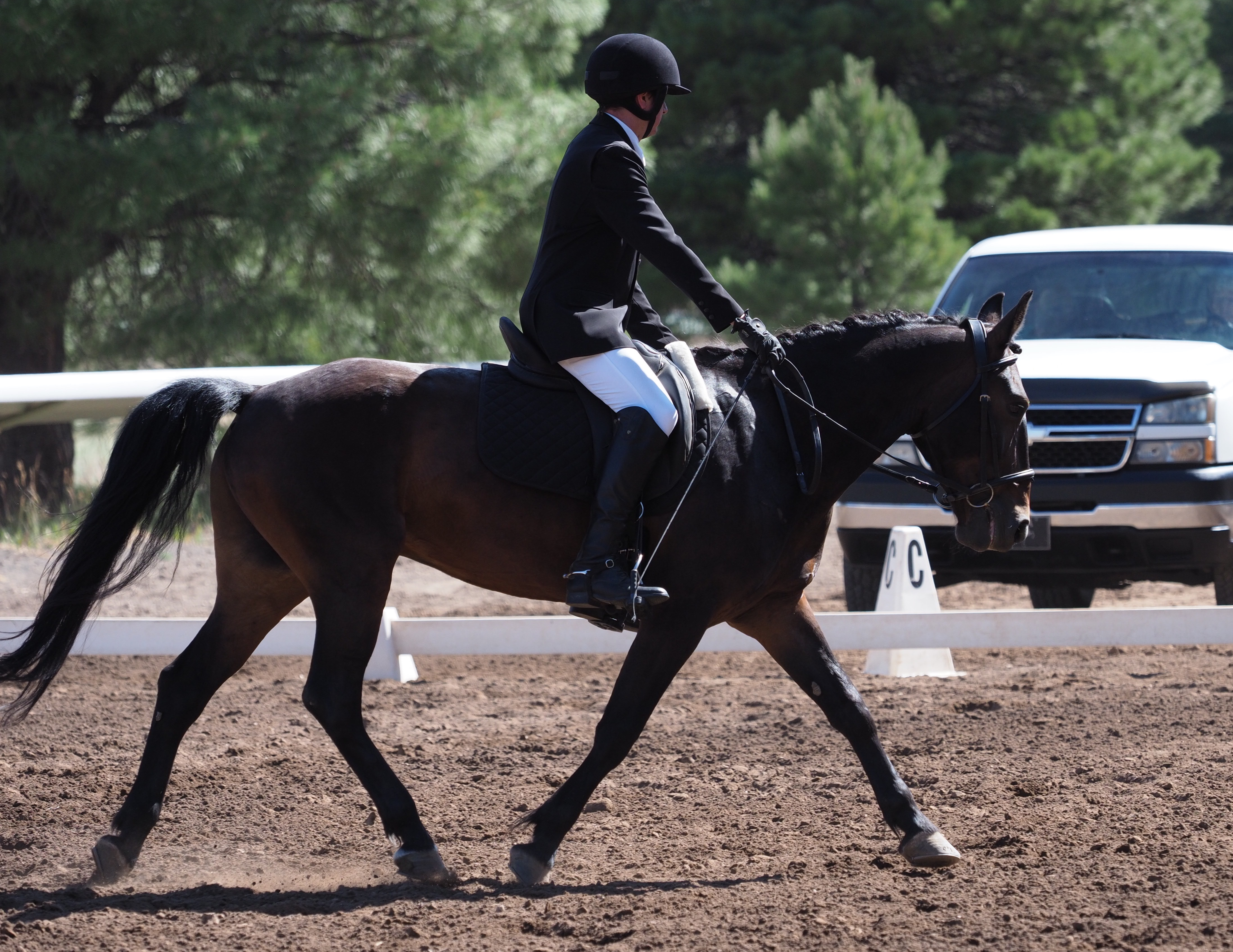 The bends in the change of directions at B to E and E to B went pretty well. 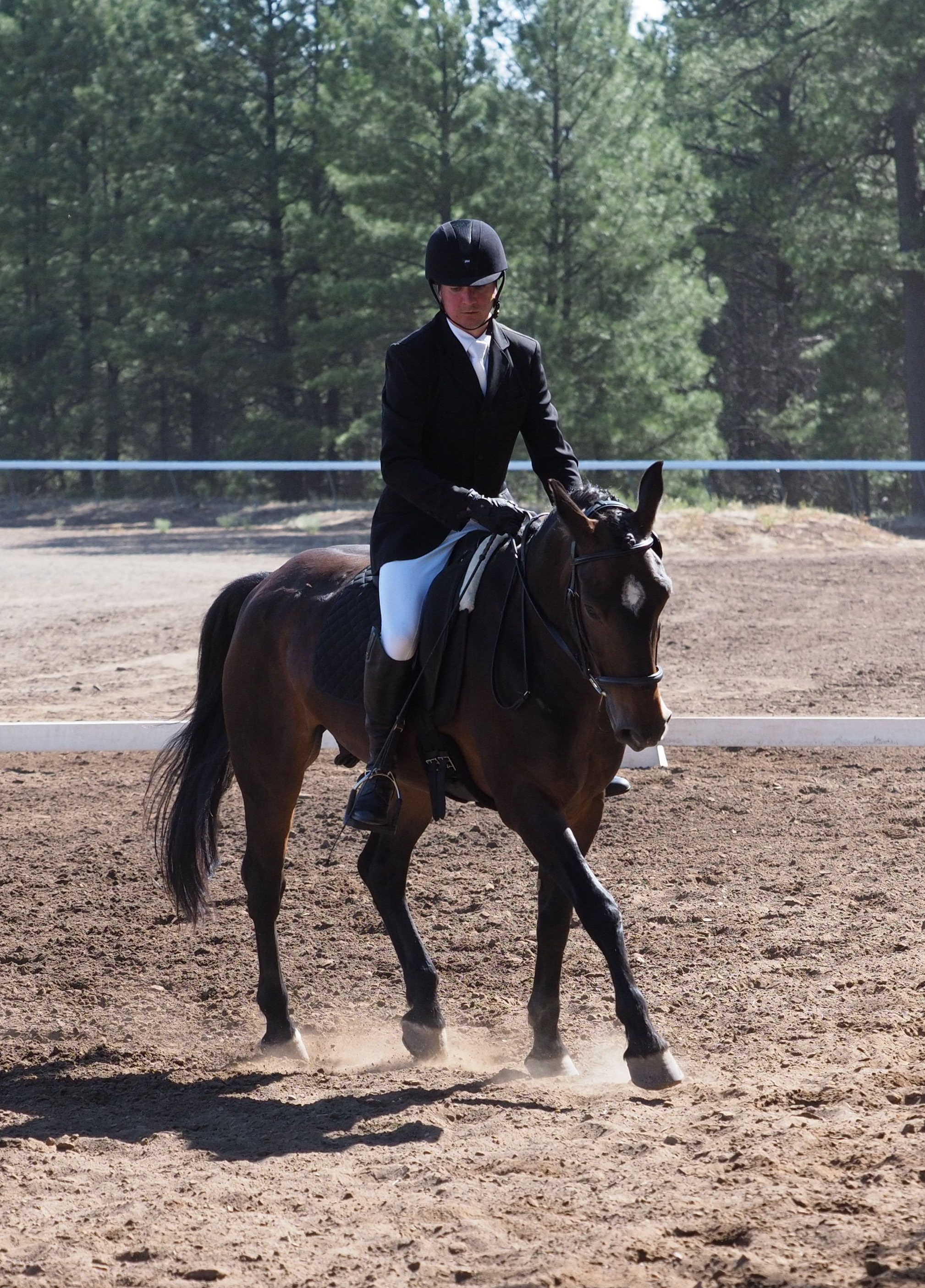 Unlike most horses, Eugene actually prefers the right lead so that transition went better than the first and the canter looked good. 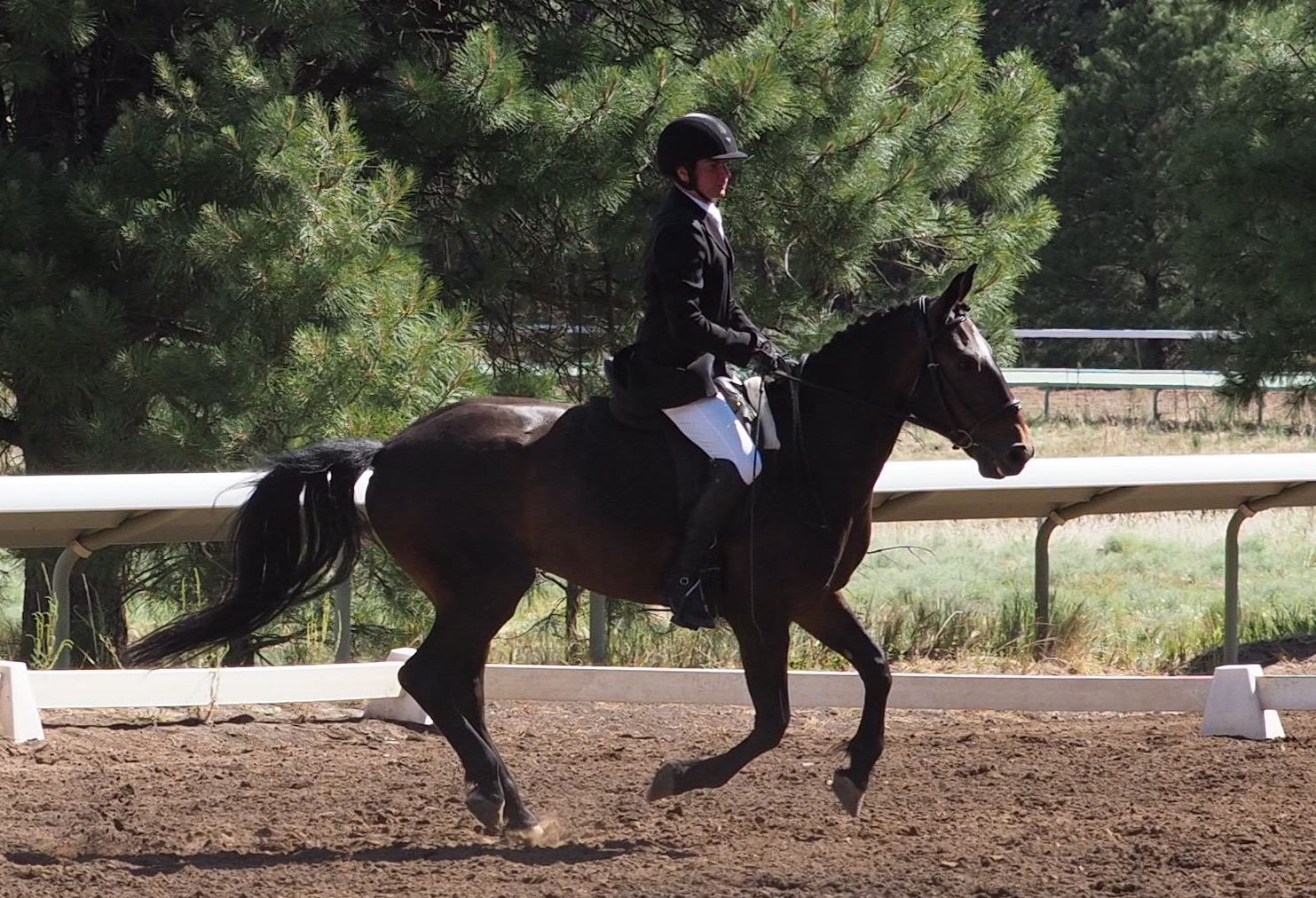 In Novice A, the transition to medium walk is in the corner. In Novice B, it’s at C. My husband forgot that and walked in the corner. That was really a shame as Eugene has a nice medium walk. They got a 4 for that with a comment of “early” (I remember that score). 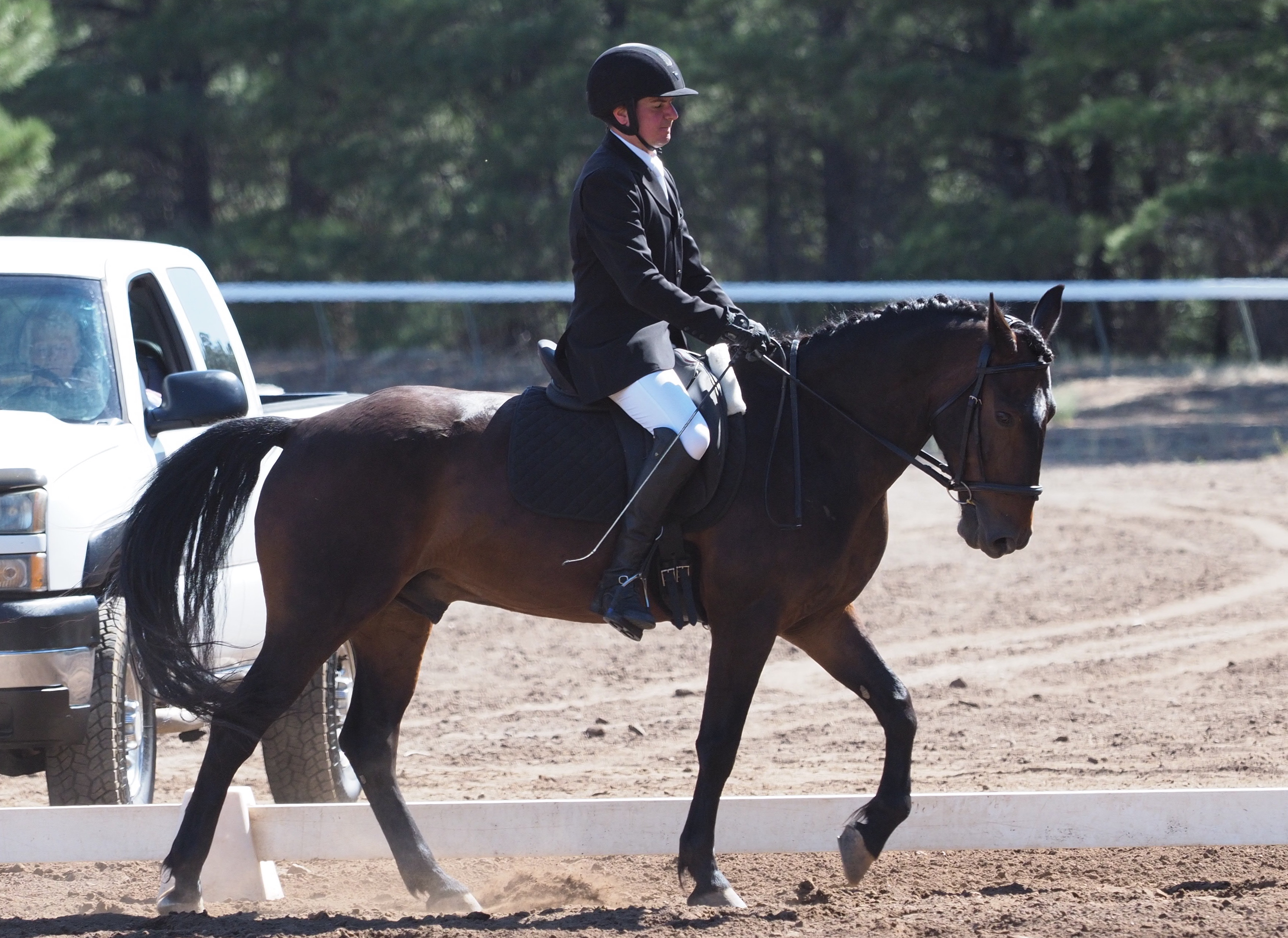 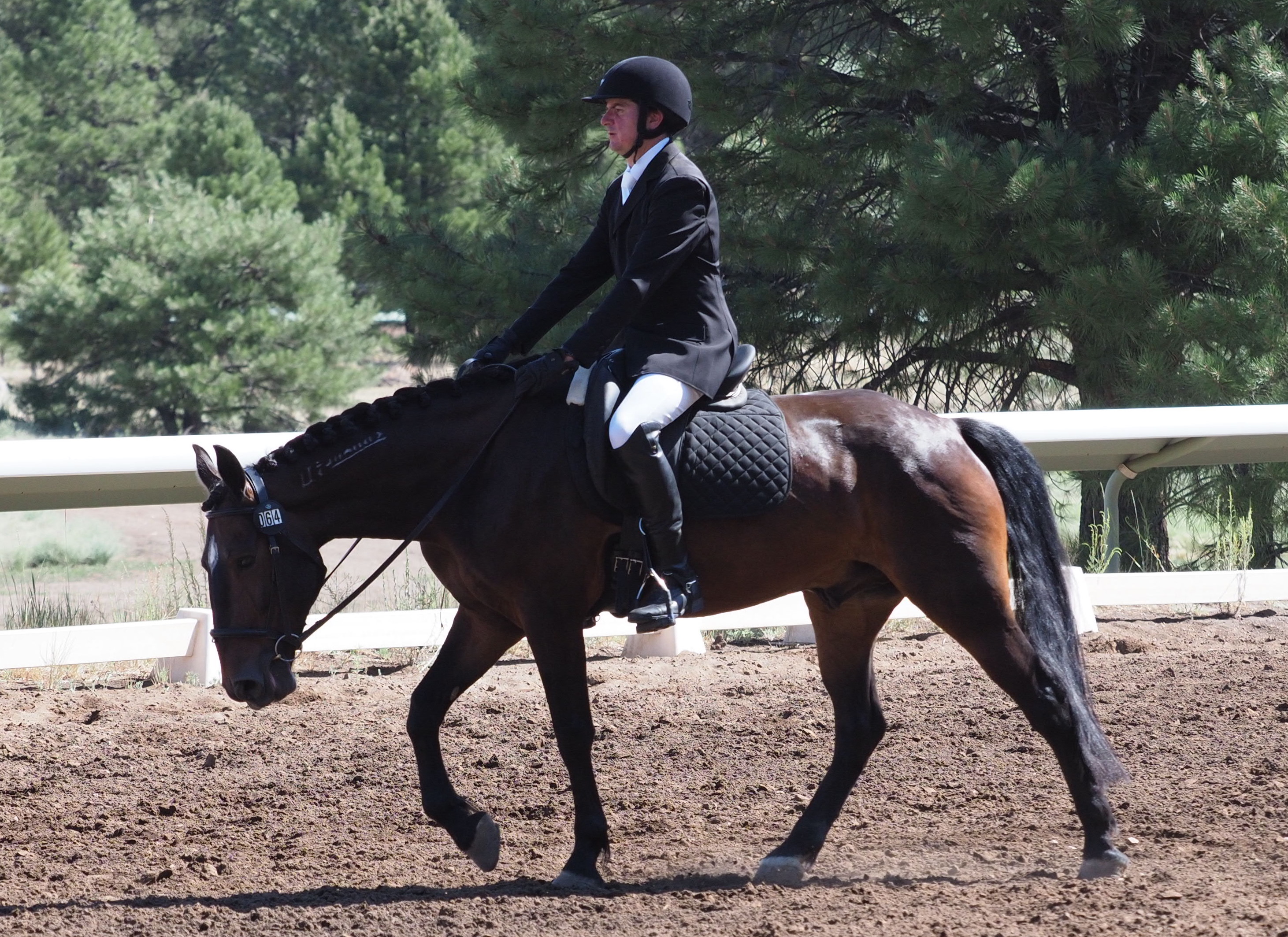 F to X to G then halt and salute. Eugene’s got a good halt on him. 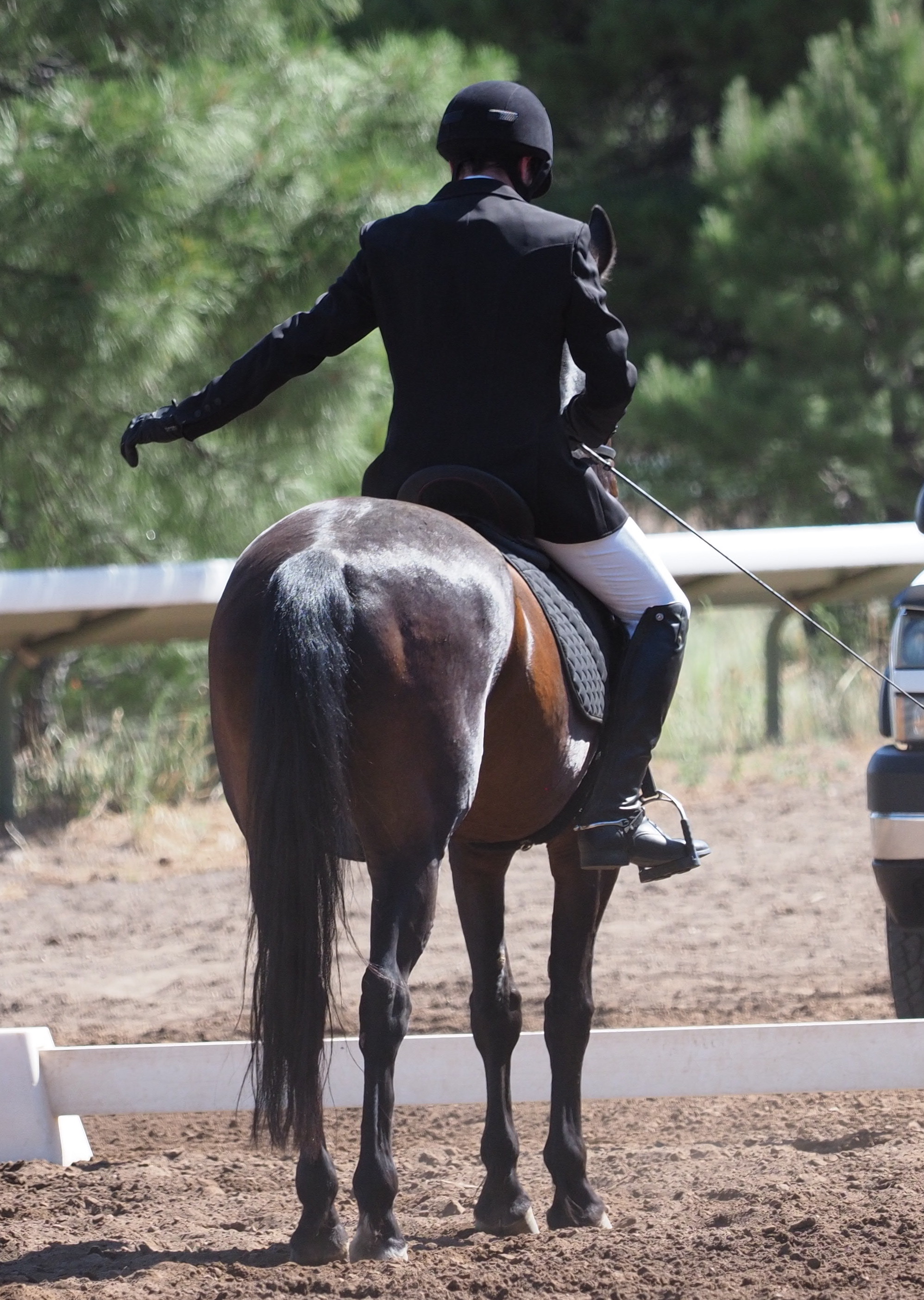 We had a few hours to rest after that and got to experience a pretty scary lightning storm. We’re pretty sure something on the fairgrounds got struck. It was the loudest boom I’ve heard in a long time. I jumped, all the horses jumped. Our whole stable block started buzzing afterwards as I think it must have struck something that interfered with the electric. They announced over the loud speaker that everyone should take cover and I was like, yep. I’m gonna go sit in the truck with the dogs. 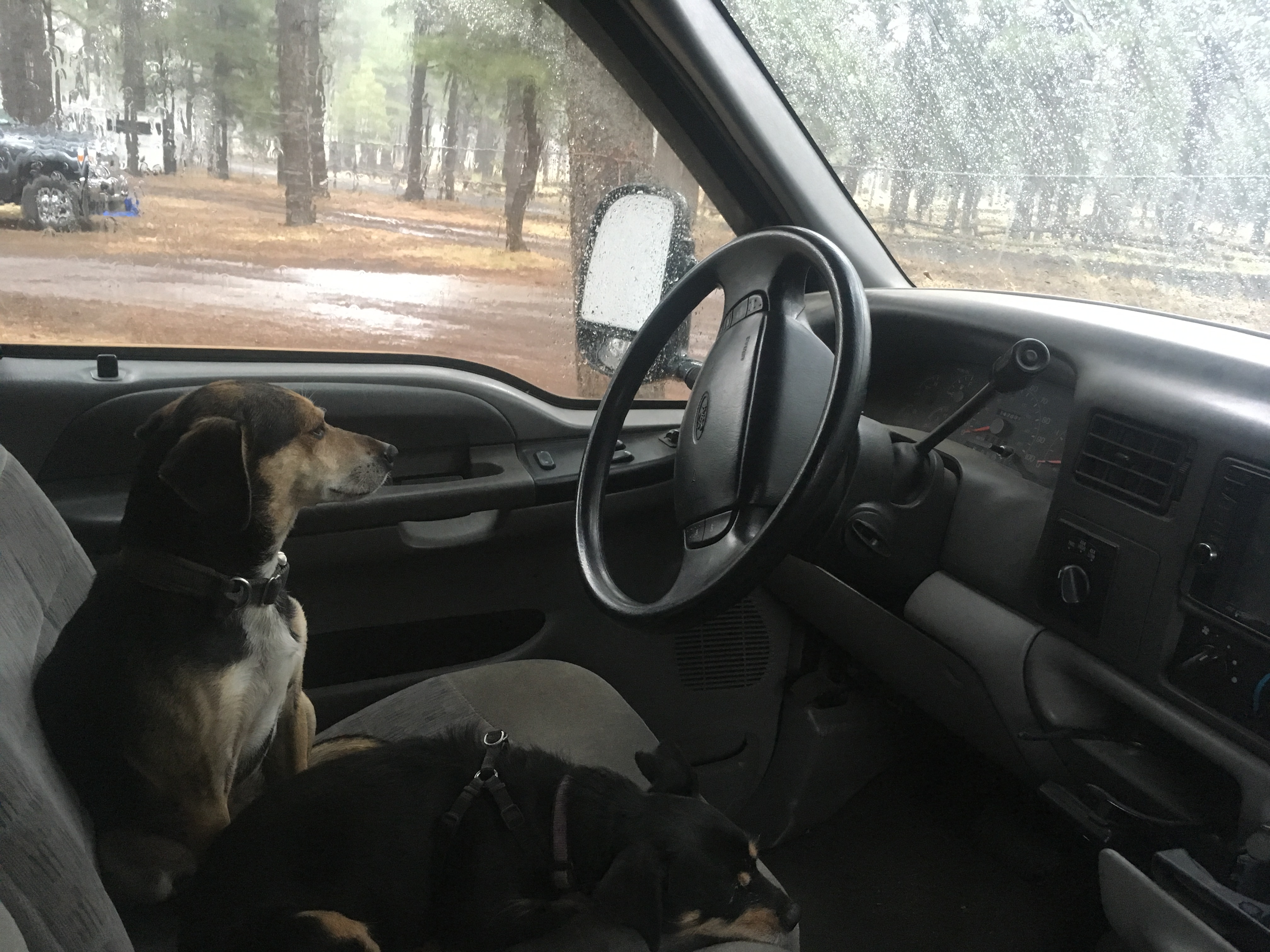 My dressage test was around the same time as my husband’s stadium, so we tacked up and went over together. Levi was being a giant stupid head (professional terminology). He was too excited to stand still for mounting and I had to hand walk him all the way over to the arena before I could get on. Then my husband realized he had forgotten his crop and had to go back for it. Ugh. Levi does not like being separated from Eugene. I tried to take Levi off to dressage and do the leaving instead of having him watch Eugene leave. This worked at first. We managed to walk over and check in with the bit check lady and then we made it part way to the dressage arenas. There’s a path onto the track between the two arenas. As we approached, a girl leaving the arenas told me her horse would kick mine if we tried to pass. There was a fence on one side of the path and a steep drop off on the other. I had to turn around and walk all the way back to the bit check area. Without Eugene, Levi decided the kicking horse was his new best friend and -when they went back towards stabling and I asked him to go back towards dressage – he lost it. spinning, bolting, rearing. I would have gotten off and dragged him down the path except for the fact that I can’t get on from the ground. Finally, some random guy (not sure if he was someone’s husband or father or what) came down the path and offered to walk me down. Thank you random stranger.

We tried to warm up as best we could though the warm up was chaotic. They had paused showing due to the lightning storm earlier and they had made a series of announcements over the loud speaker that there was a 20 minute delay. When I checked in at my arena, the steward said there was no delay and she didn’t know why people checking in thinking there was one. I told her about the announcements and she radioed in to the office to have them make a new announcement telling people everything was on time now. It’s a good thing I was early. 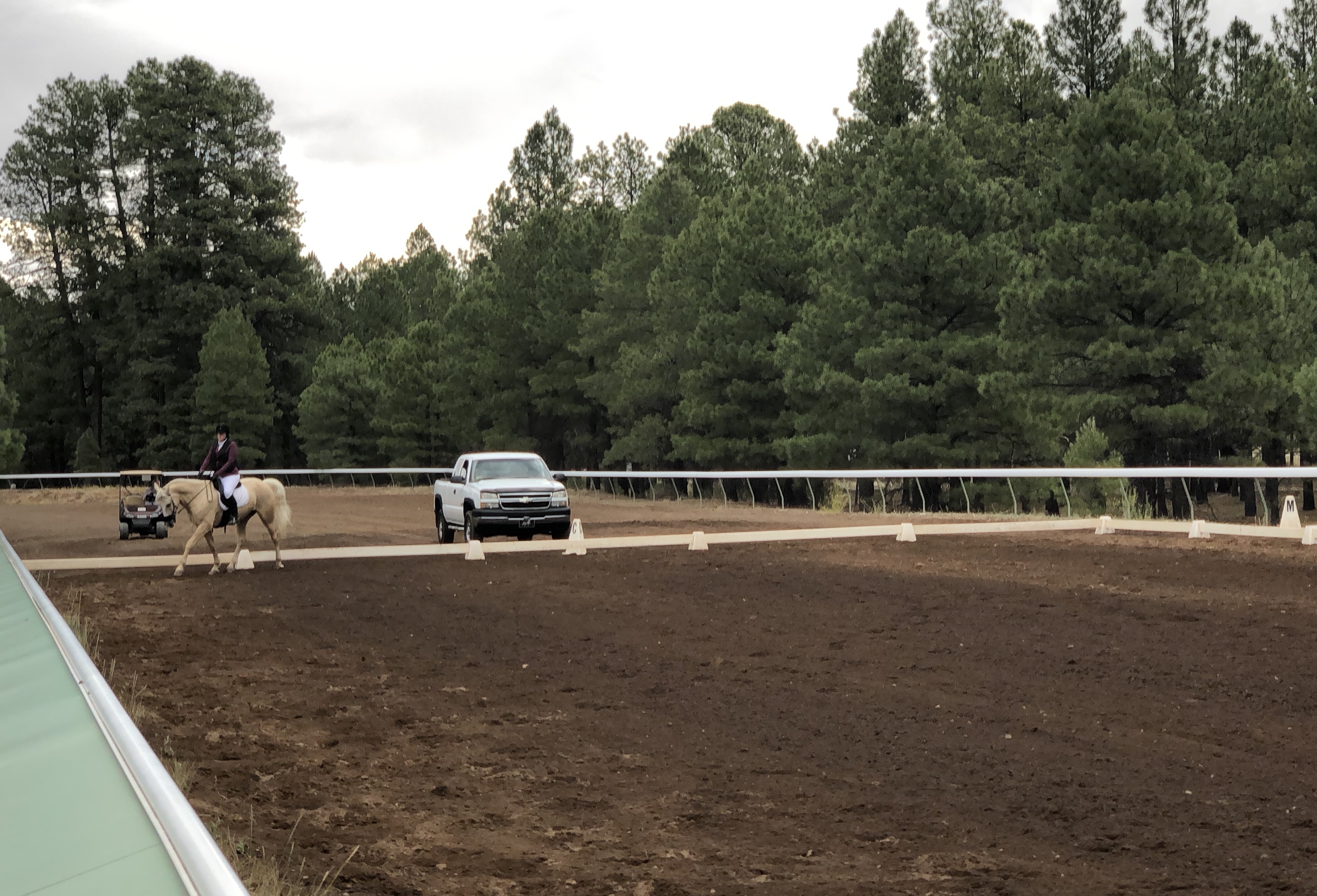 Because the arena fills up the width of the track, you can’t go outside of it before your test. To give riders a chance to go around the arena, they send you in as soon as the previous person halts and you trot/canter/whatever until you are rung in. Then you exit, turn around, and come back in. It was a little weird. I watched a few horses have a bit of a tantrum when they exited and then were sent in again. Like, omg, we already did dressage, are you kidding me? 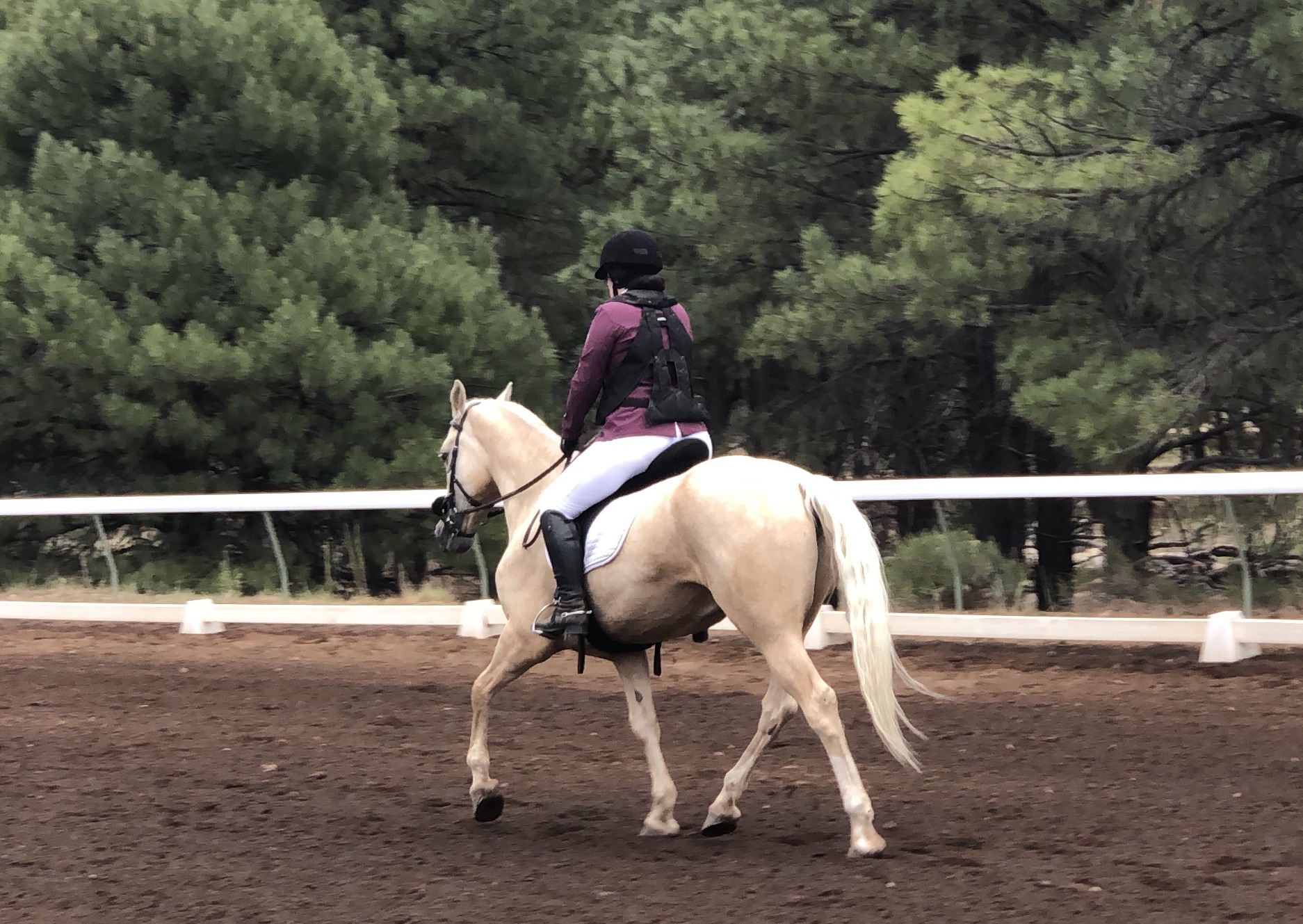 enter at A… again

Although I usually take my air-vest off for tests, because Levi was such a jerk getting to the dressage warm-up, I decided to keep my vest on for this test. It ended up being unnecessary as he was quite good, but I prefer to play it safe. 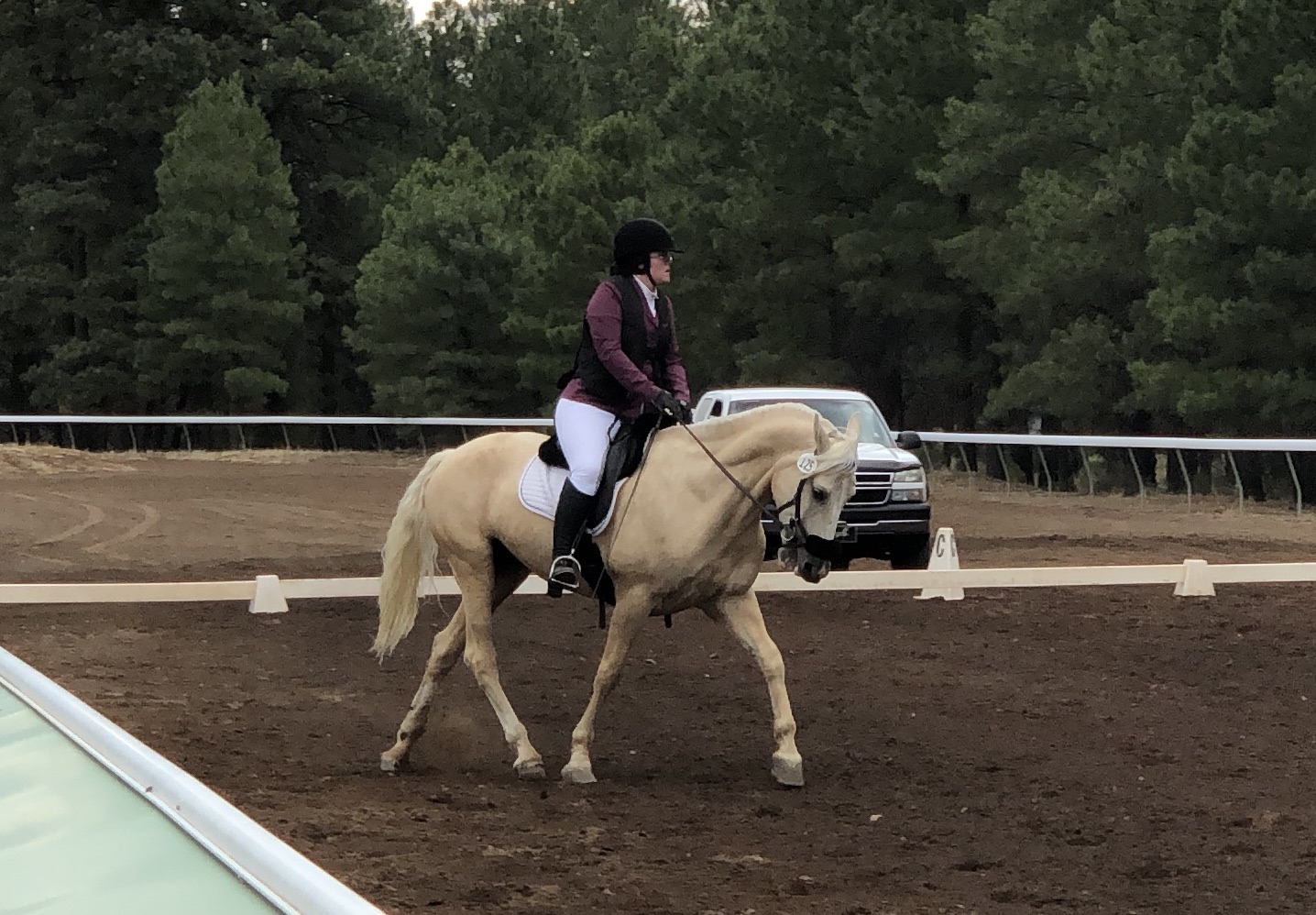 One thing I did not mean to leave on was the sheepskin on his noseband. He has a cut on his nose again. He’d gotten it before. Although the bridle doesn’t create the cut (he does it somehow in pasture) it rest right on the cut and I use the sheepskin to try to prevent rubbing it. I usually take it off when I clean my bridle the night before a show, but I didn’t bother to clean my bridle and totally spaced on that. The TD found me later and told me they wouldn’t eliminate me this time since I was just doing Intro, but I had to removed it before dressage next weekend. I thanked her very much for not eliminating me and explained it was because of a cut and not meant to be a shadow roll and that I had just totally forgotten to take it off. She said I could get a vet’s note to approve it for next weekend if I wanted to, but I didn’t want to bother; he can survive without it. 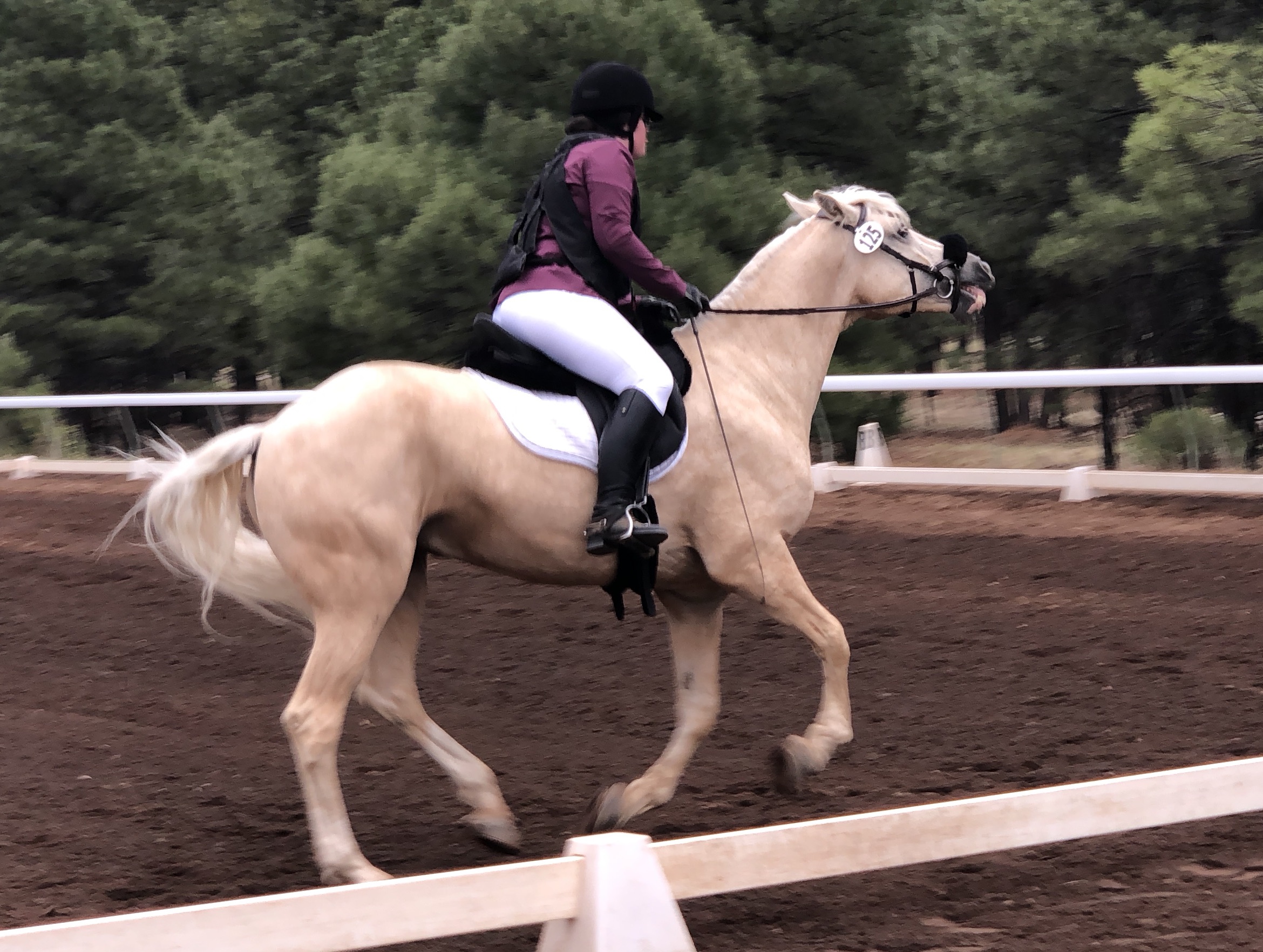 Anyway, back to the test. Our first canter transition was – as usual – unnecessarily attitudinal. But the canter itself was pretty good. 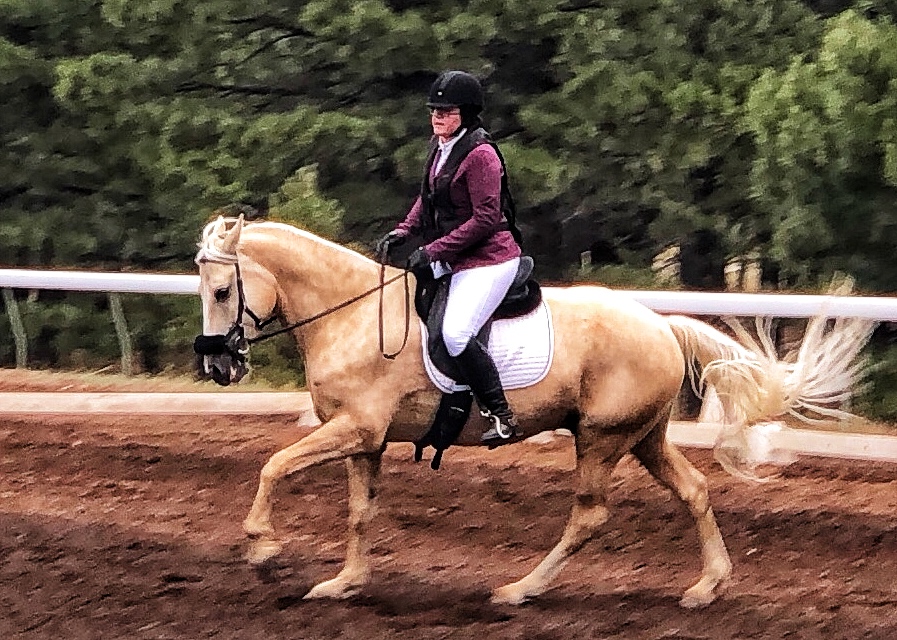 Free walk was mostly good though he did get distracted and lift his head up about 2/3 of the way through. 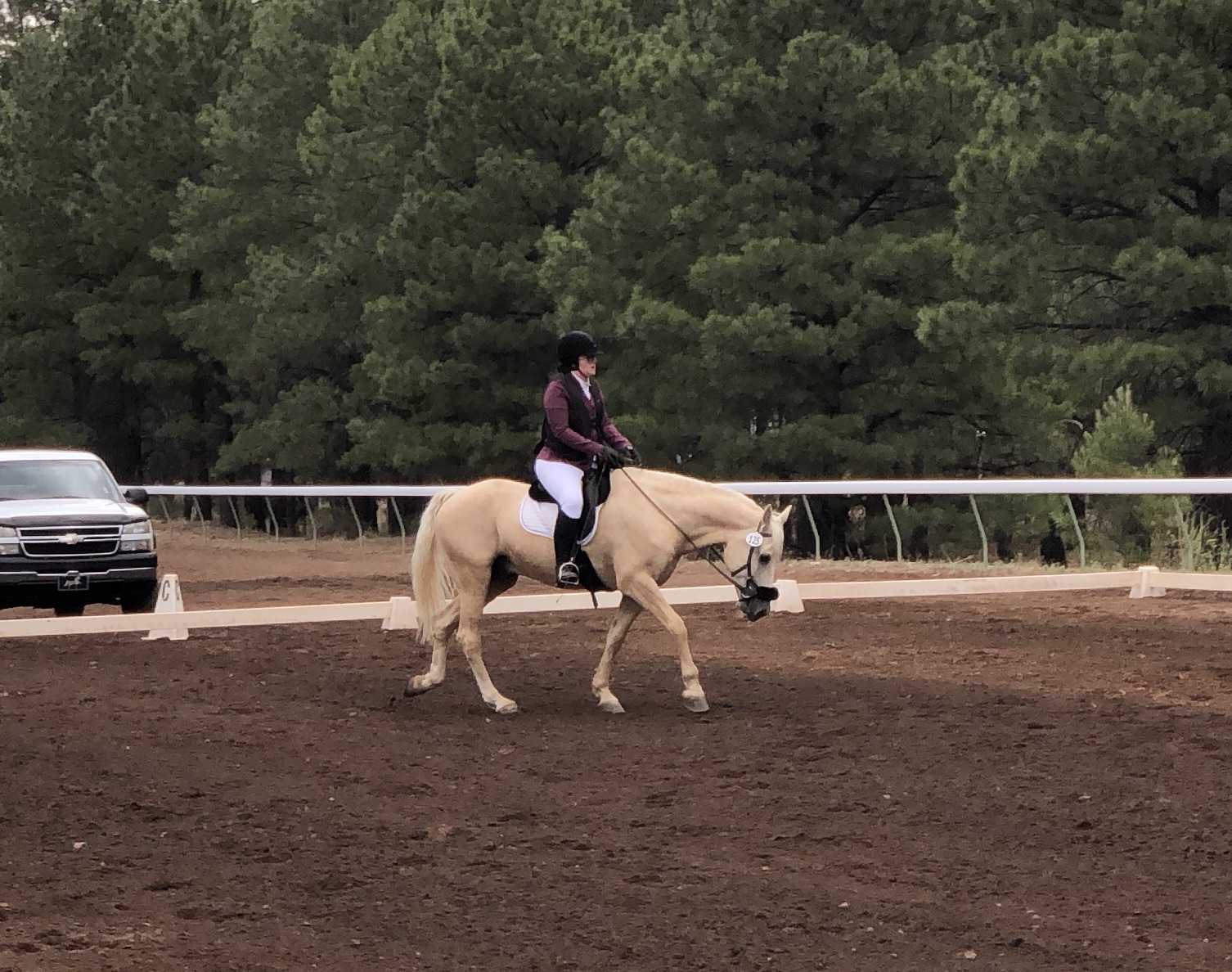 Levi often gets anticipatory after free walk and tried to jig from F to K. This time, he wasn’t jigging, but he did eye the exit at A and trying angling himself right outta there. That’s the other issue with practicing in the arena right before the test; Levi had learned that exiting the arena was a thing. A bit of a spur kept him aligned though. 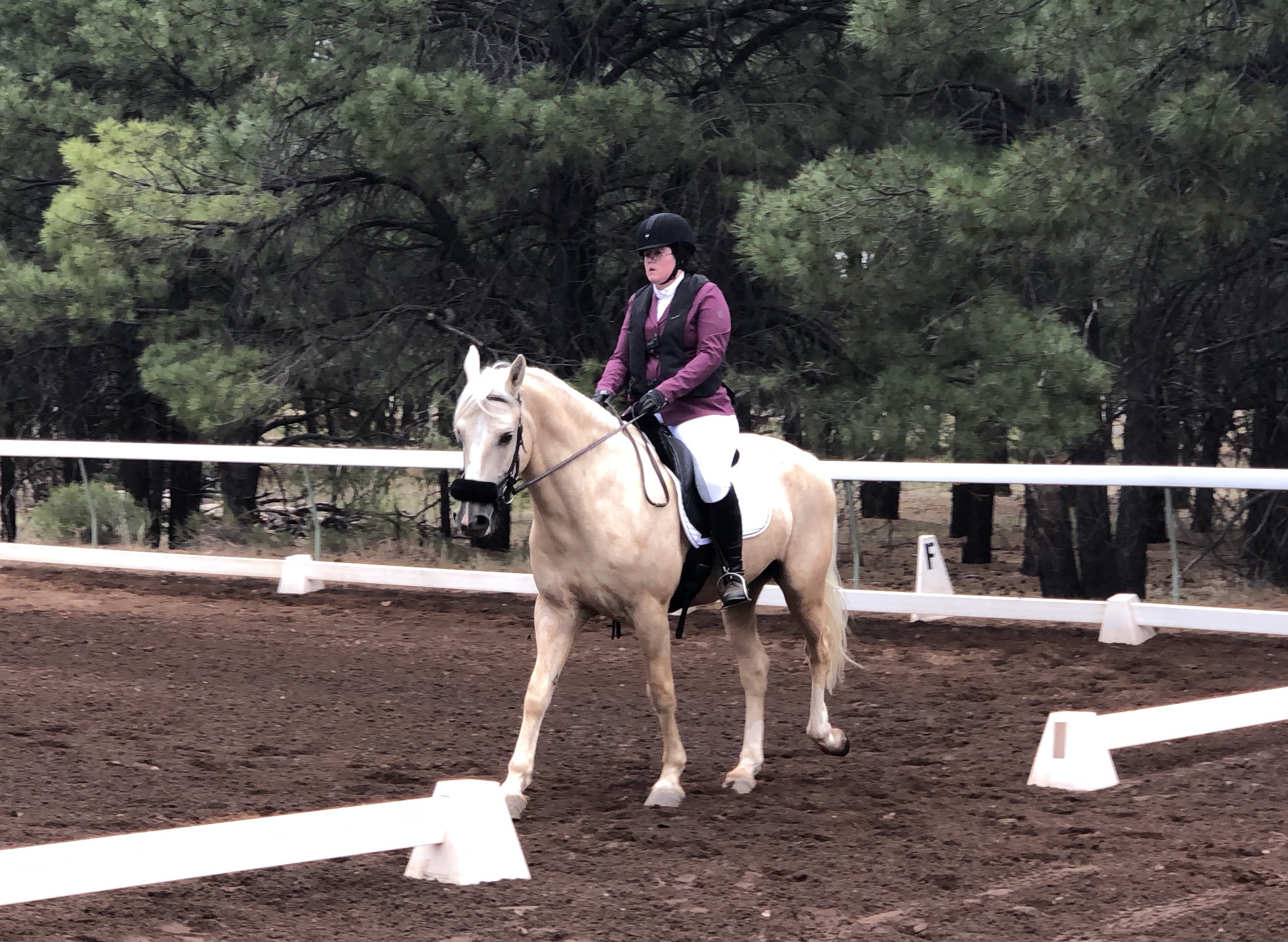 Right trot was fine, then we went to right land canter. We got the correct lead! That’s really the best that can be said about this: 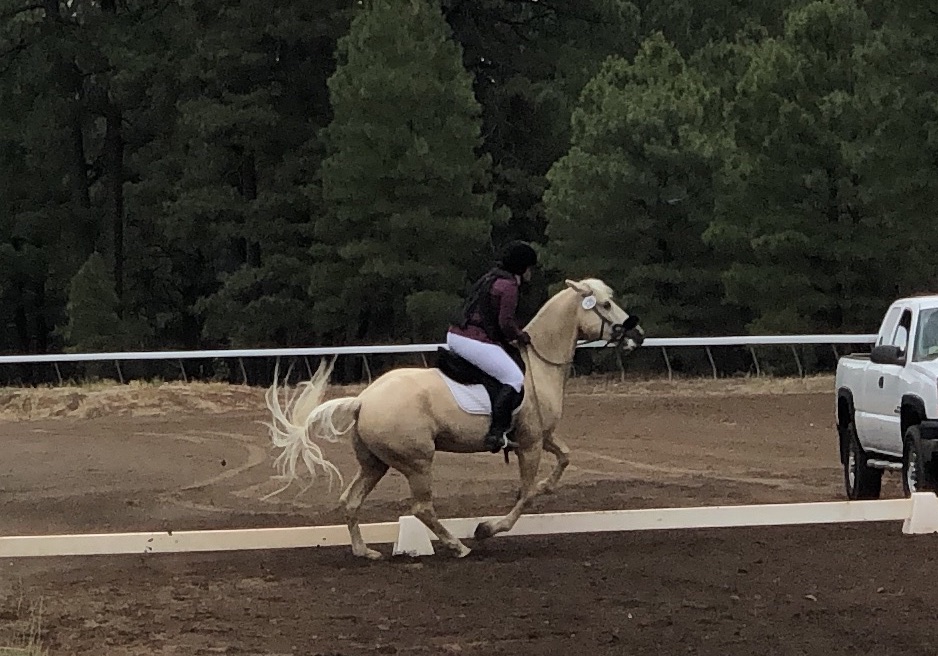 Once again, the transition was terrible, but the canter work itself was fine. I did mess up the geometry of the circle a bit.

The down transition looks pretty good in the pictures. I really paid attention to the notes from my practice test the day before and prepped for the transitions. 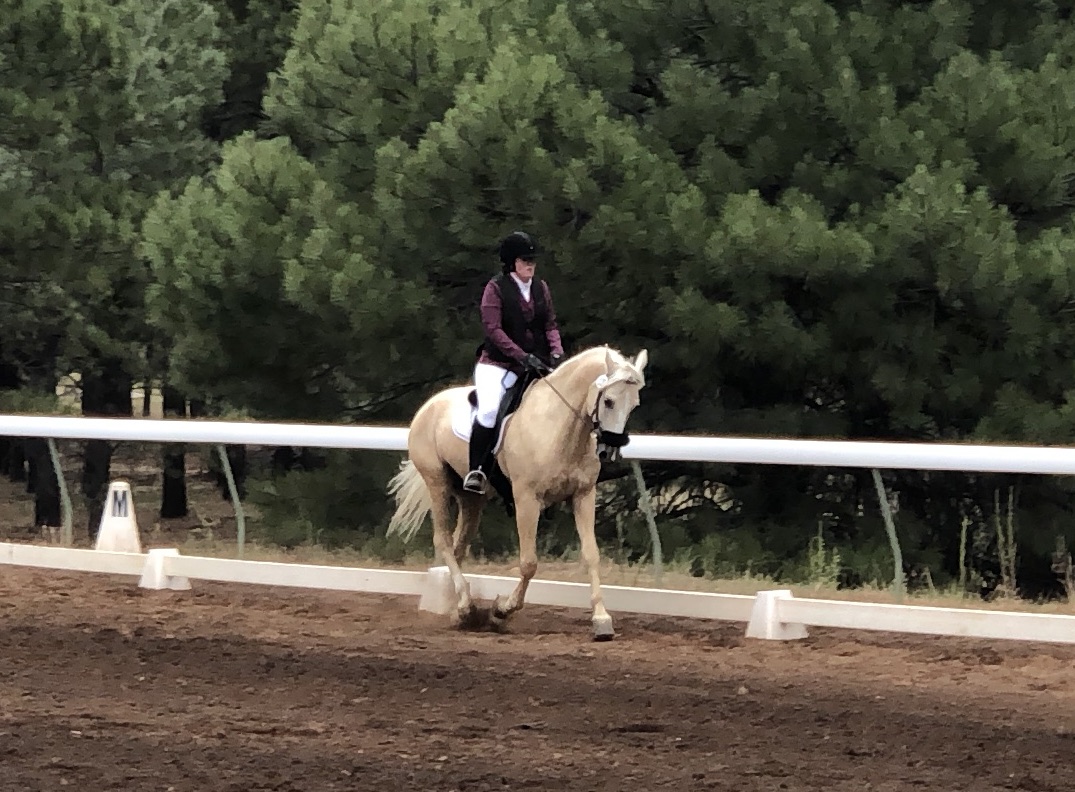 Then we were done and halting. The initial halt was good, I saluted, and he decided that was that and turned to walk off. 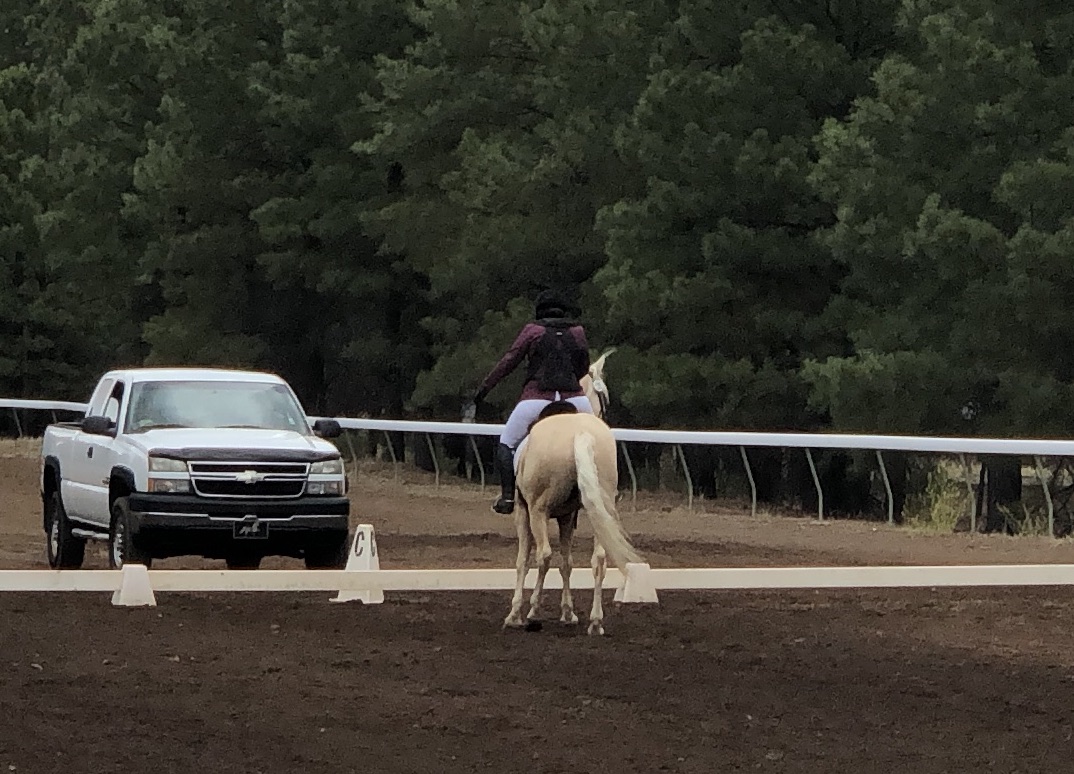 Since we lost the tests, I don’t know what score I got for that halt, but I don’t think it was that bad. I am pretty sure we halted for the full 3 seconds, he just started walking before I finished saluting.

I ended up getting a 38.6. I was a bit surprised at that. It wasn’t a great test, but I’ve put in worse tests and gotten better scores. Once all the scores were in, I realized the judge was just tough because that score still put me in 6th out of 18. Most importantly, we were done and didn’t get rained on or struck by lightning. Goals! 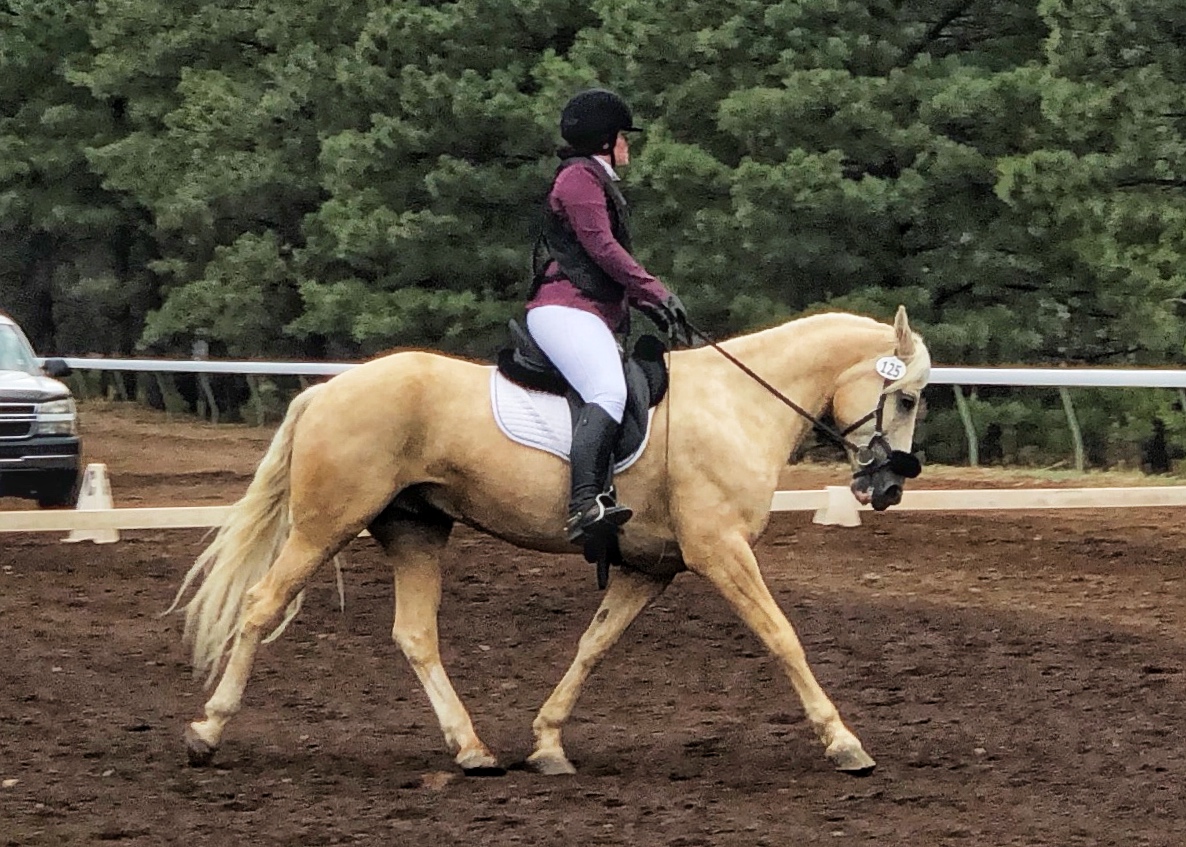 Next up will be stadium. Will Eugene go clear? Will I get eliminated again? Stay tuned!