Once my dressage was over, it was time for my husband to do his Stadium round. The whole time he was warming up, I was watching the lightning in the background and hoping we could get through his round before the storm got to us. Because we were both riding and there was a threat of rain, we didn’t bring the good camera with us and thus I only have cell phone shots. The stadium course for the first weekend was like a hunter course: lots of diagonal line to outside line to diagonal line. 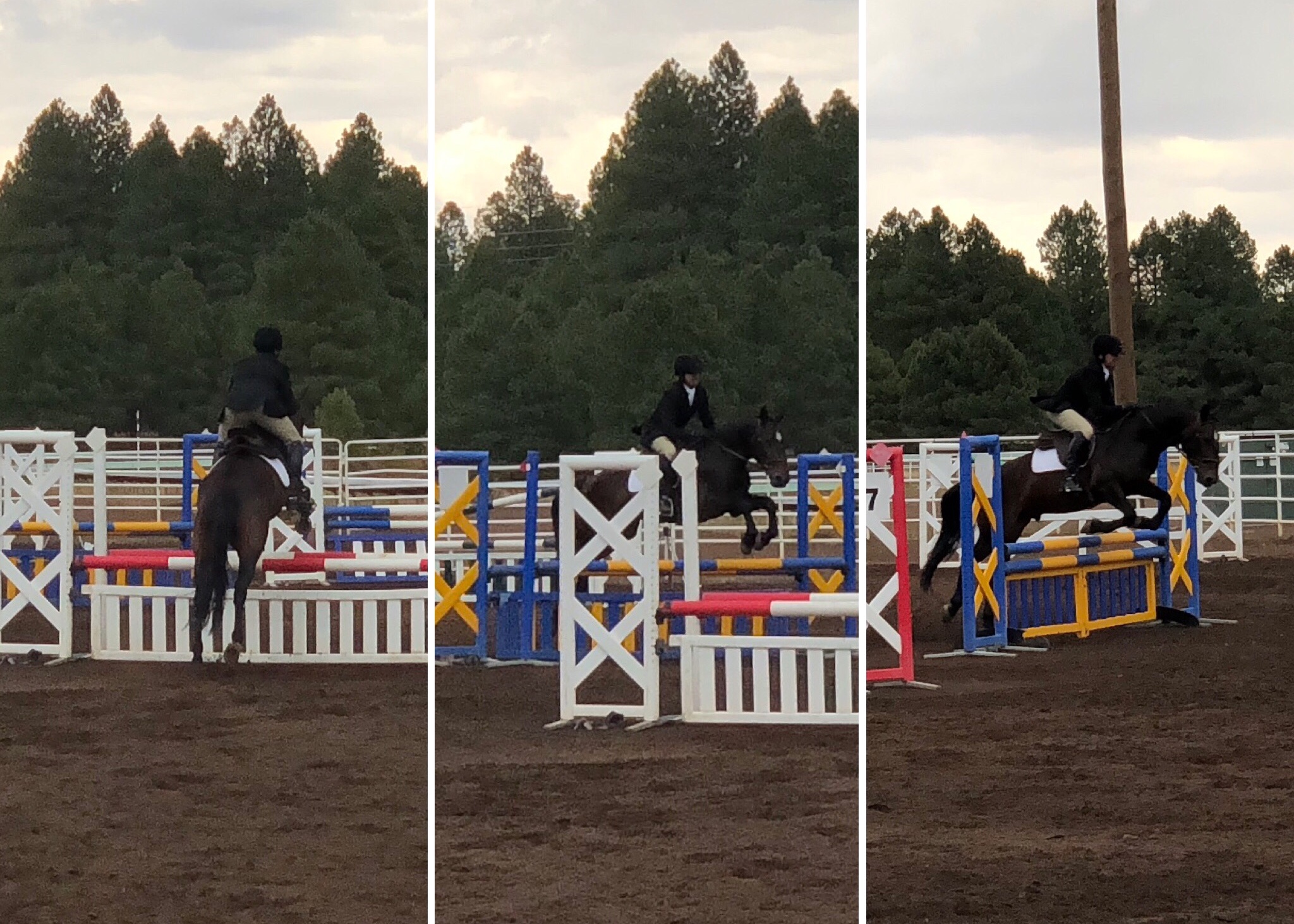 I didn’t remember the course as well as I thought and after #3, I got the phone camera lined up with jump #5, then saw the number and was like wait, where’s #4? I look at my husband coming around the corner and I’m like, that’s an awful line for going around that jump. That’s because he wasn’t going around it, he was jumping it. It was… very ugly. Eugene came to a near stop, then sort of stair climbed over it with every leg in a different place. Because I was confused, I didn’t get any pictures, which is a real shame because that jump was special. The best part was, they were clear.

They regained momentum, cleared #5 like normal and then aced the 2 stride at #6 despite my husband looking very intently at the ground. 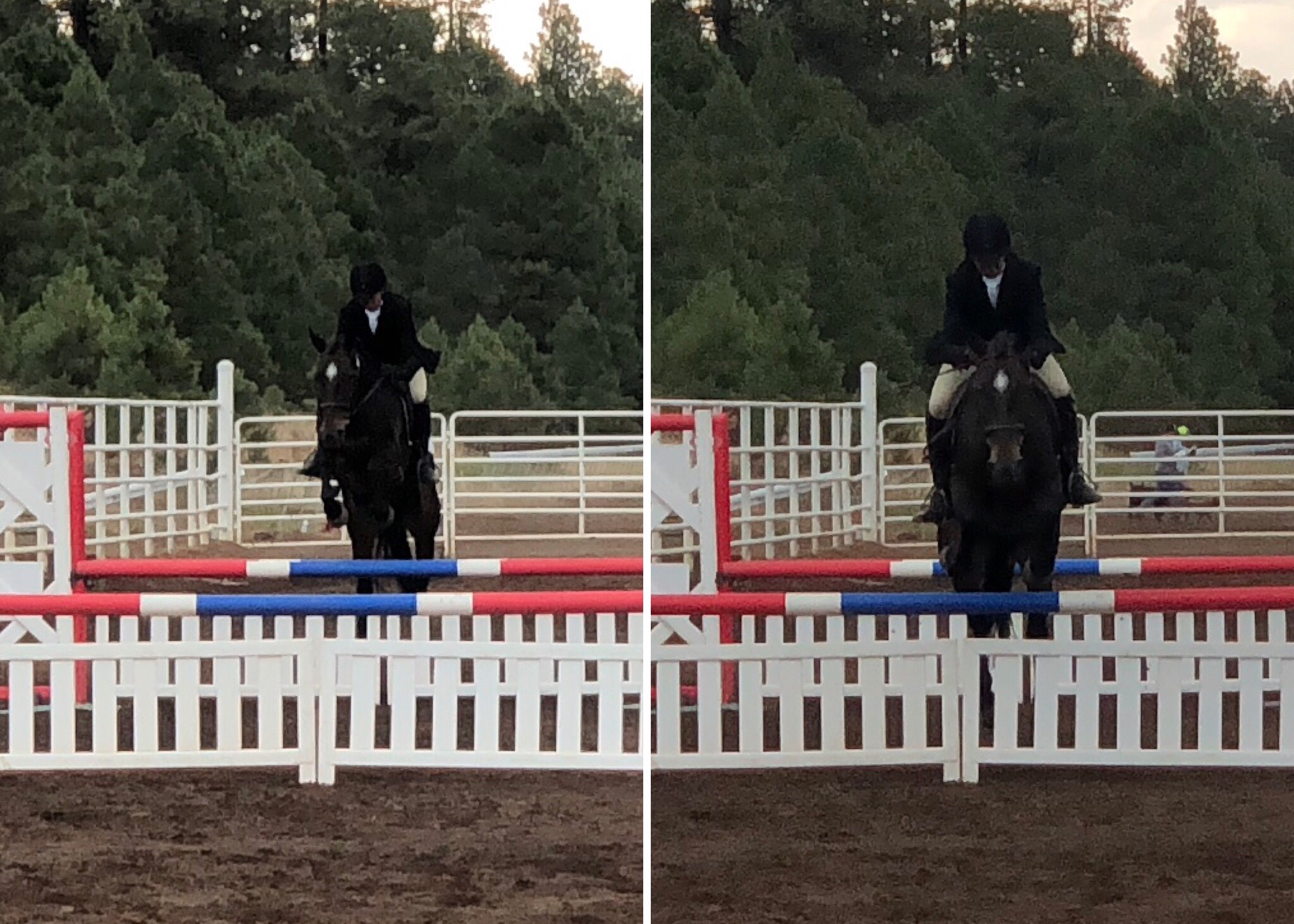 Not sure what’s down there

Then they were around the turn to #7 and down the line to #8 and double clear! 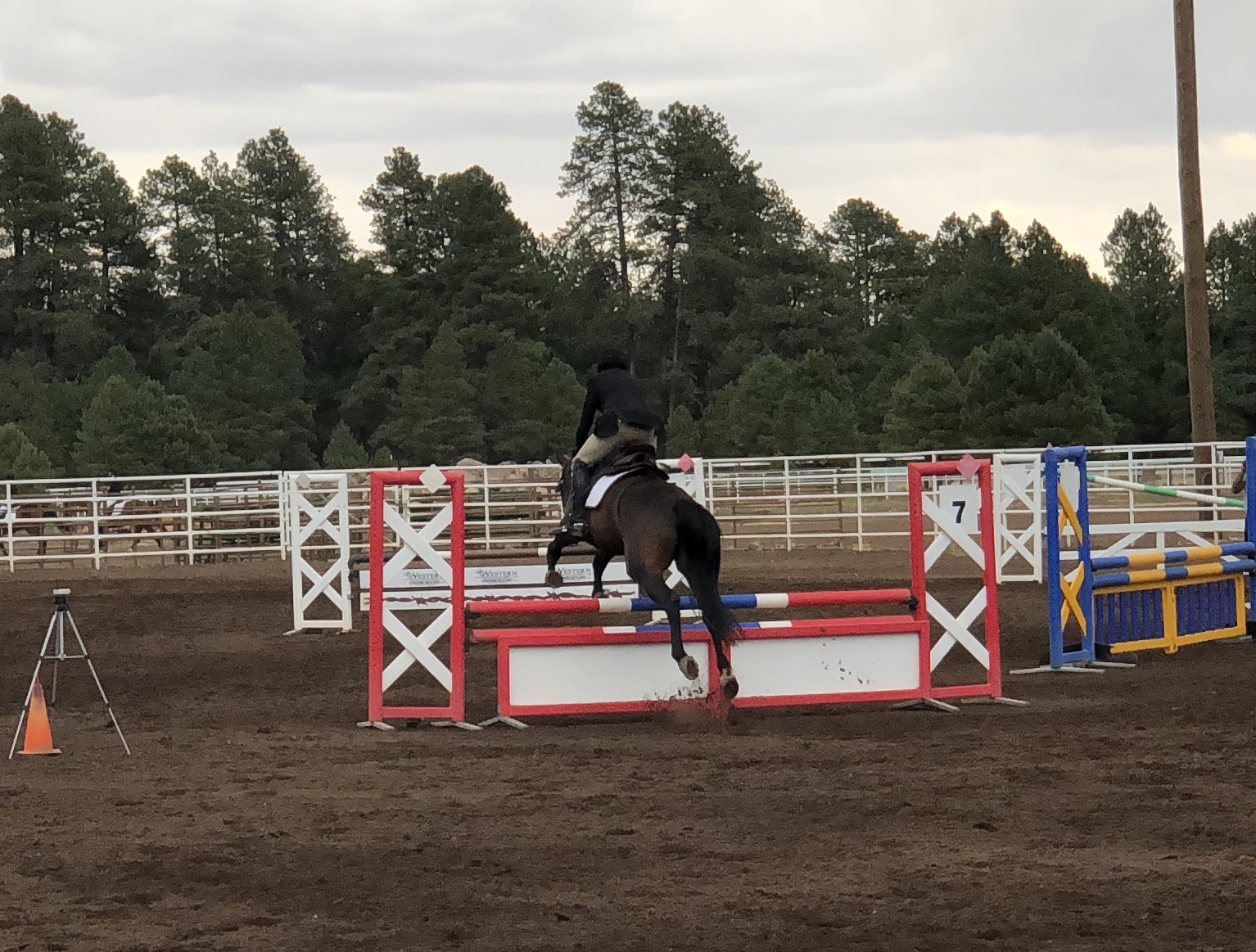 This was their first time going clear in stadium at the Novice level. We were both super happy with Eugene. They really have come a long way.

We got back to the stalls before the skies opened up, but then I had a few hours before my stadium to sit around and get more and more anxious. The size of the jumps didn’t concern me, it was the inevitable elimination and potential fall from Levi spinning out from underneath me that I was worried about. I was so convinced that I wouldn’t make it around stadium without getting eliminated that I hadn’t even walked my XC course the night before when my husband walked his. I just walked with him.

Levi warmed up just fine because the warm up was in the other arena. We really weren’t having jumping issues, just arena issues. They were running behind so I had way too much time on my hands and spent a lot of it just walking around thinking too much and hyperventilating. 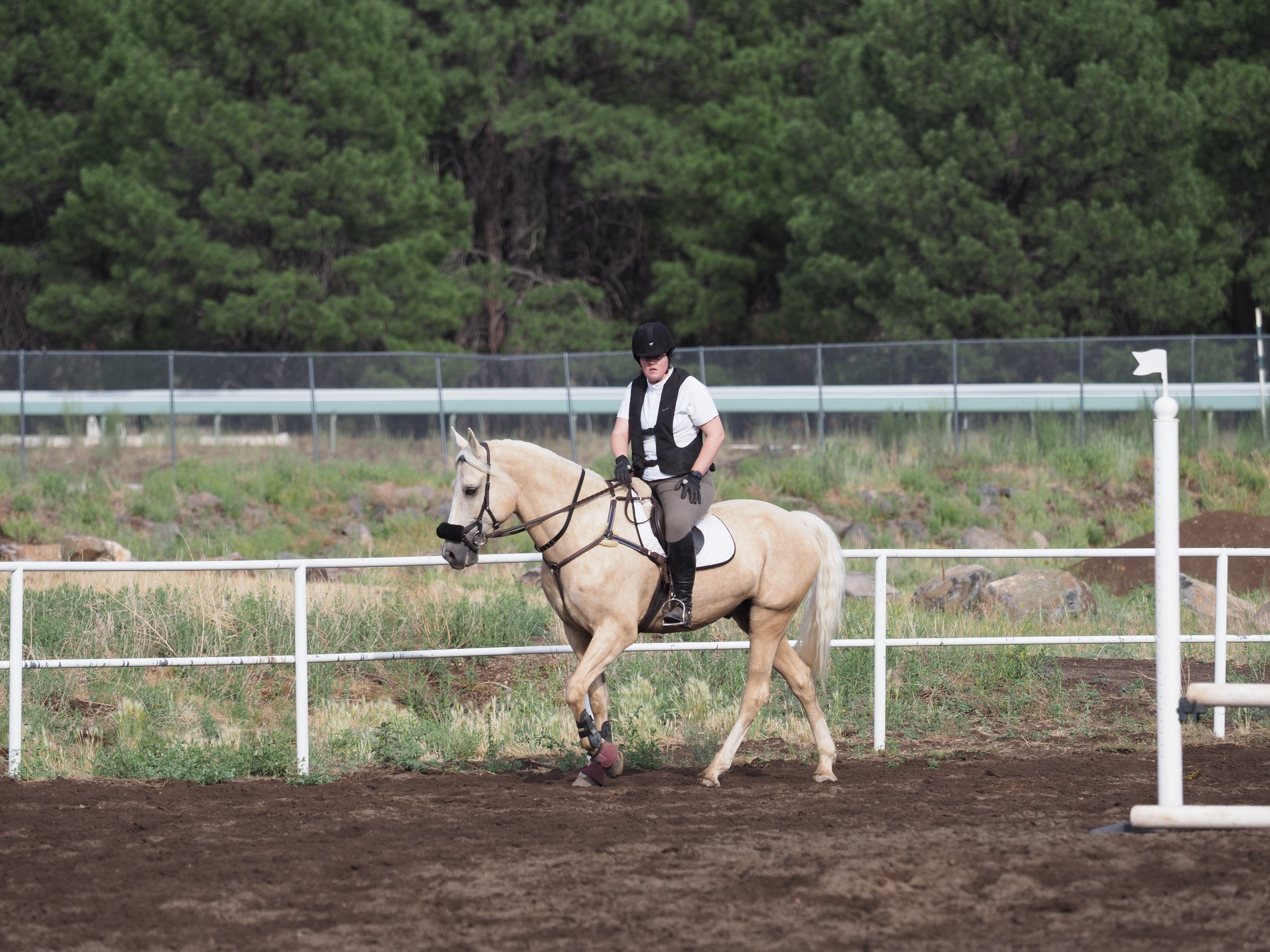 My husband brought Eugene over to the warm up arena and went to the other end of the stadium arena when it was my turn to go. Since my second elimination in the practice rounds the day before hadn’t even involved jumps – just a complete inability to leave the gate area due to sheer panic – we thought having Eugene at the opposite end of the arena might help Levi want to go that way. I dunno; we were desperate.

We entered the arena and Levi immediately went into nope mode. I beat him. I knew I could only hit him 3 times before getting a yellow card, so I hit him hard those three times. I managed to get him to leave the corner, but he was still too upset and refused the first jump. 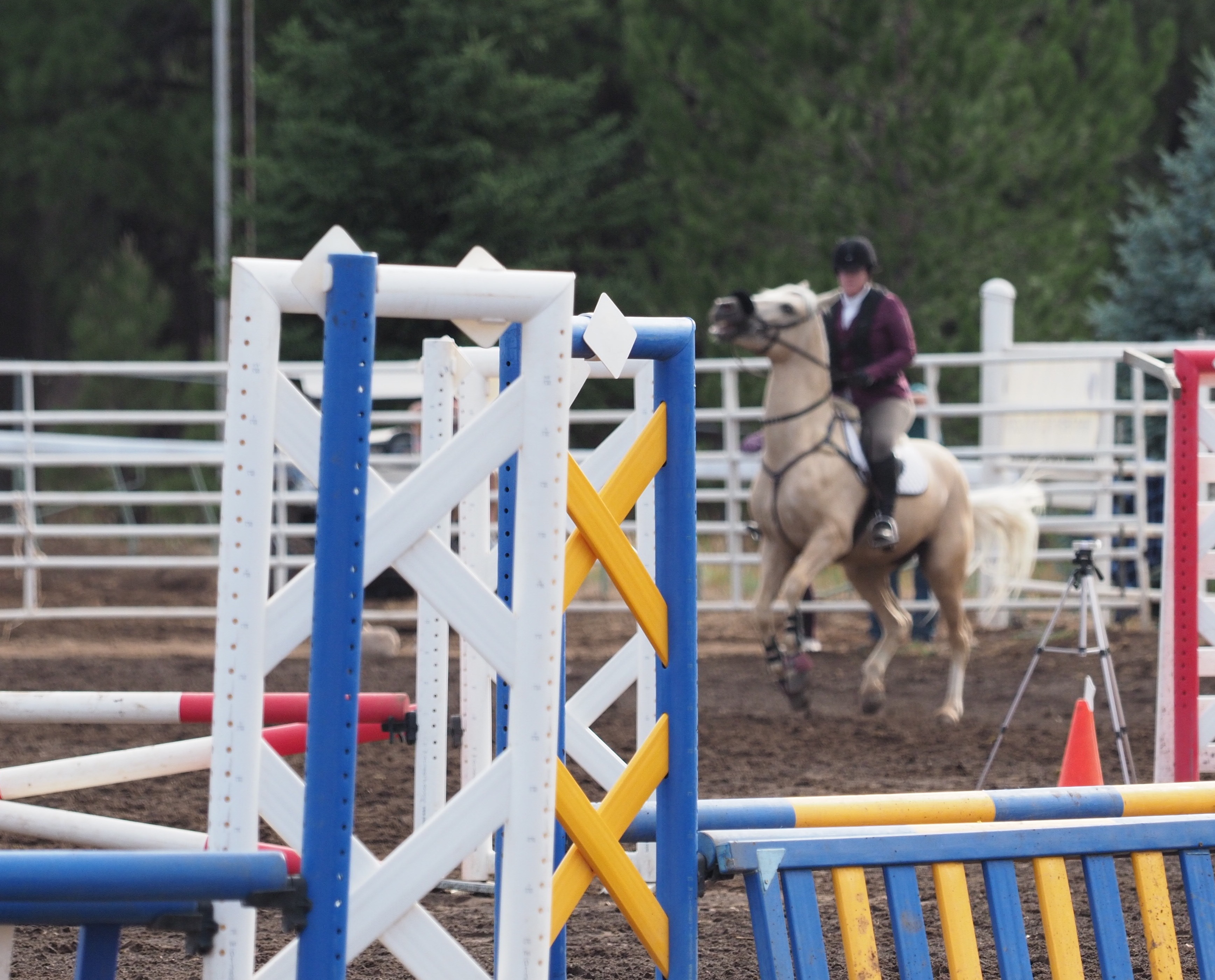 We circled around, but he was still in nope mode and it took a lot of wiggling and more beating to even get him to approach the first jump. We wasted a staggering amount of time. But he did go over it. 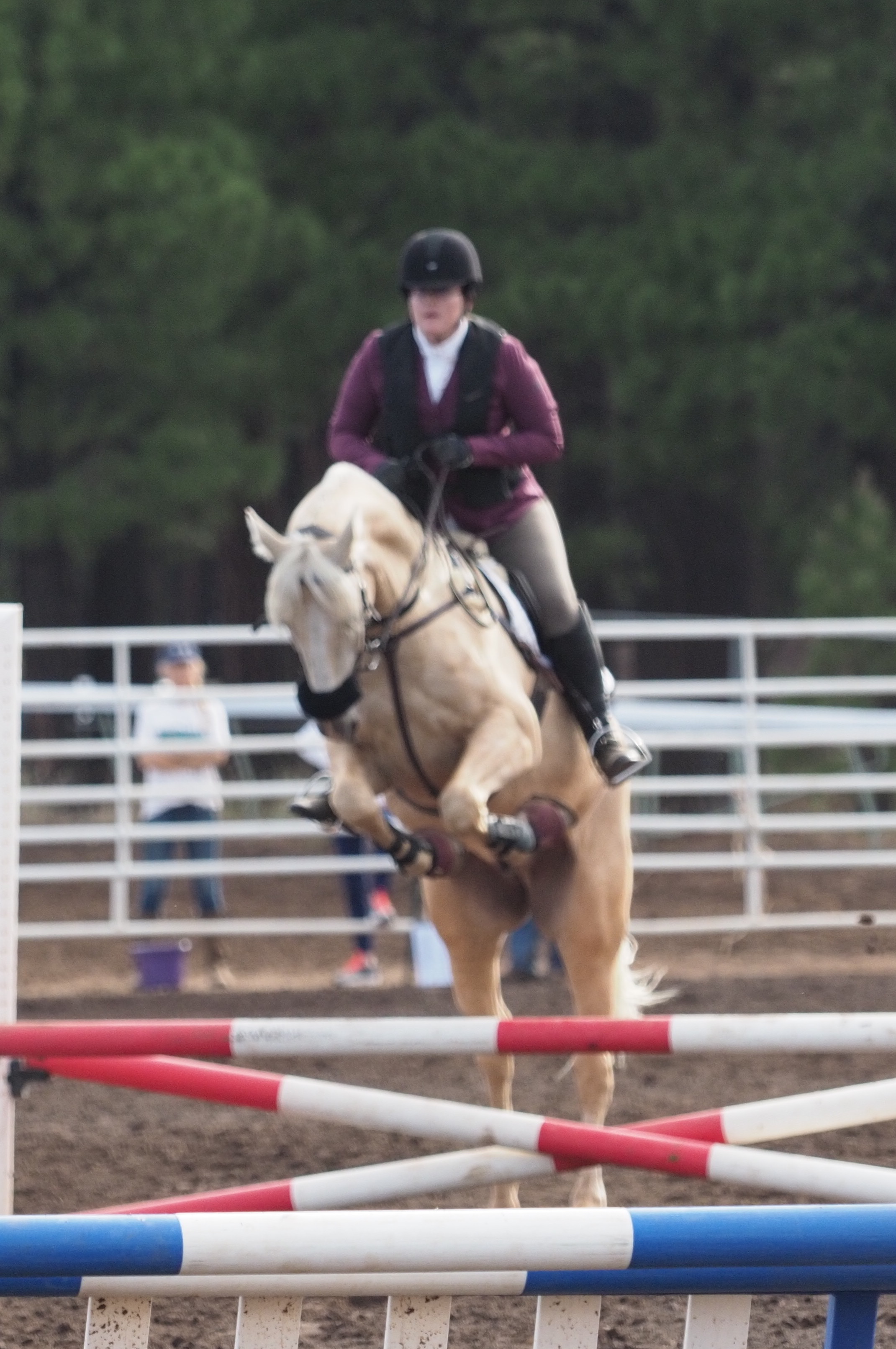 We went around the arena and turned towards #2. I pushed him hard with leg on and a few taps with the crop, but he still slammed to a stop. 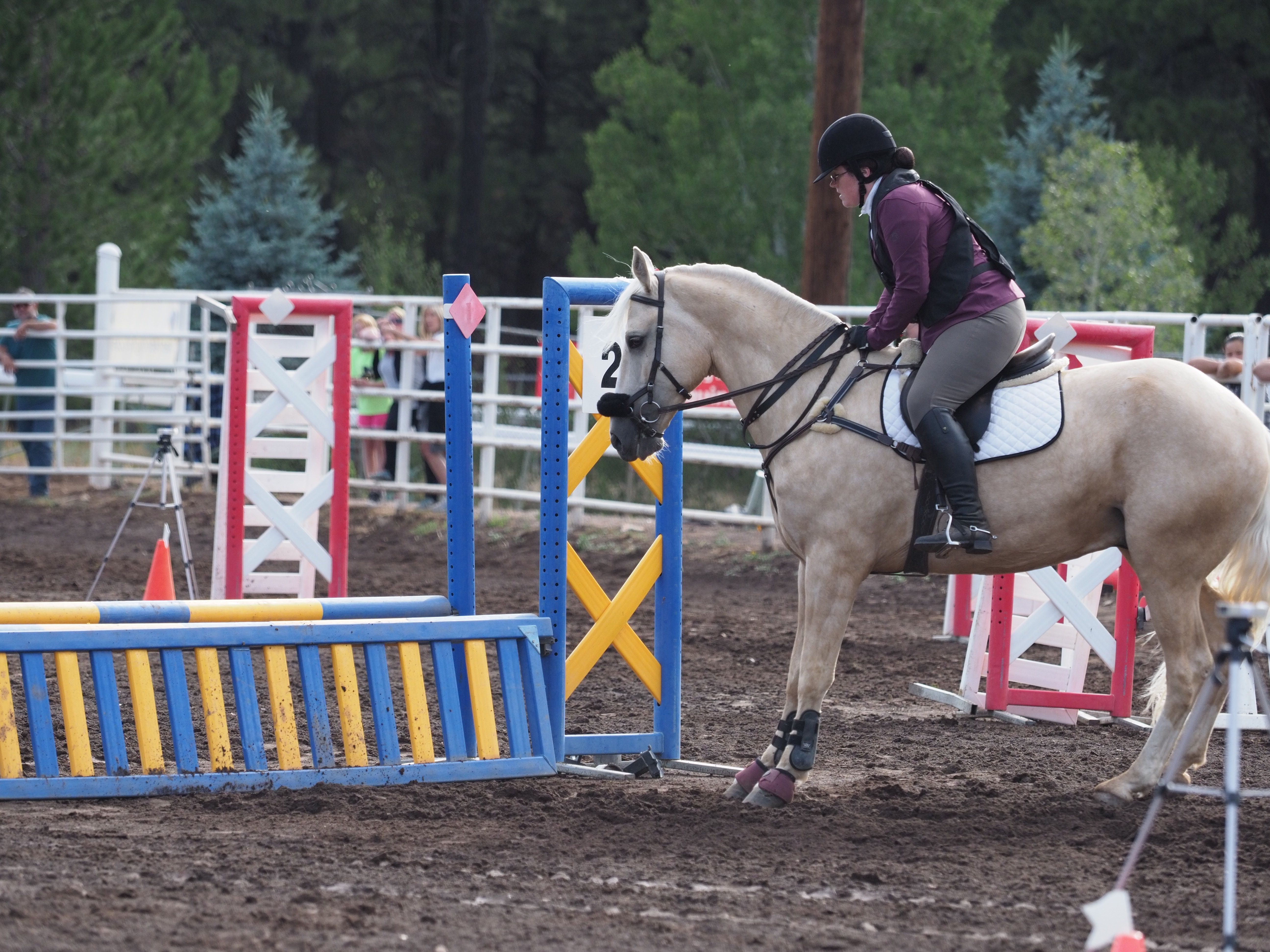 I’m not excusing his behavior, but he was legitimately terrified. I could feel him shaking with fear. At the stop at #2, instead of beating him, I just took a moment, breathed, told him it was okay, and calmly walked him a few steps, then picked up trot and canter and re-approached. I started talking to him. Just quietly telling him random nonsense like he was a good boy and “it’s okay,” and “you’re okay.” We got over #2. It wasn’t pretty, but we got over. 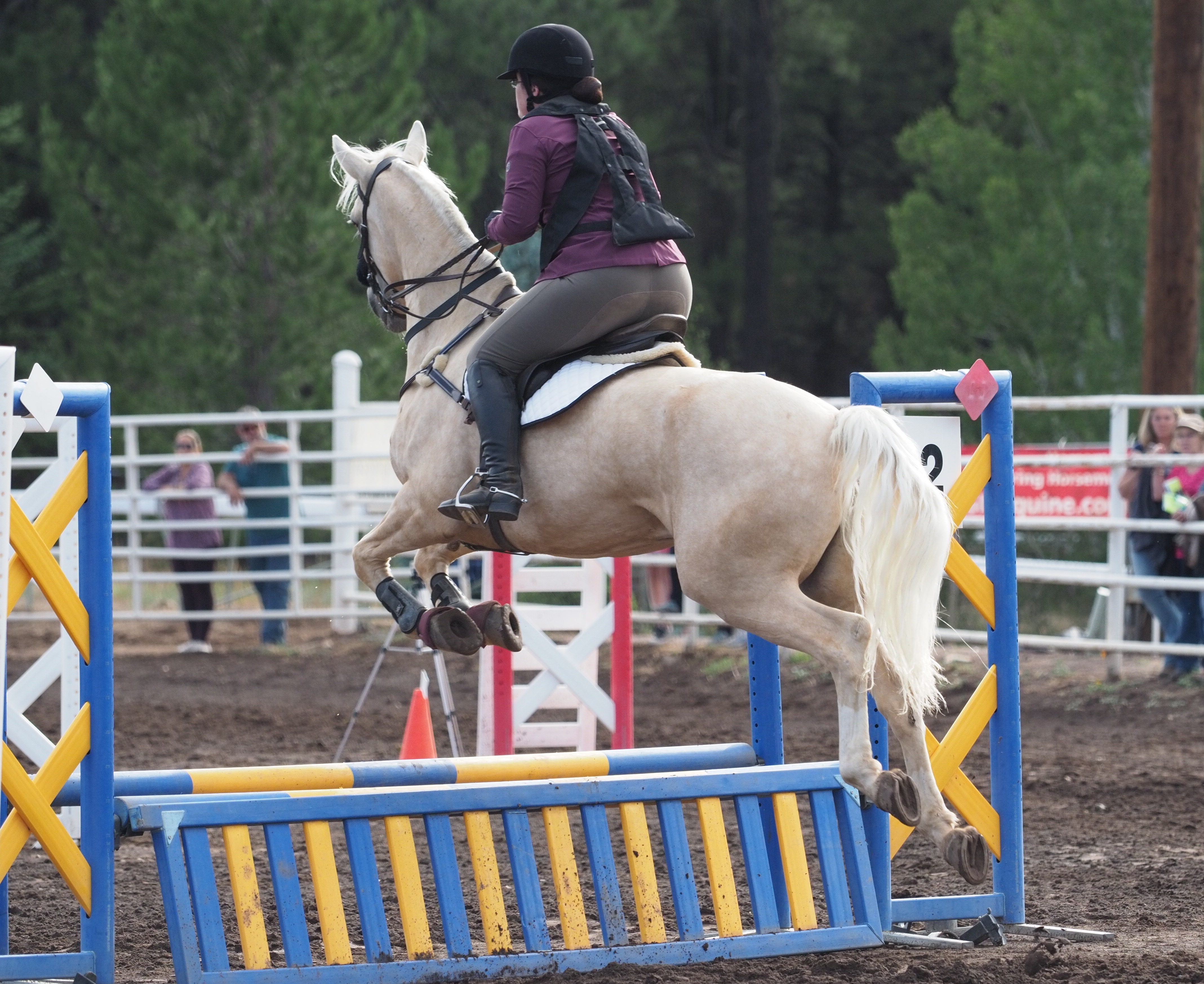 I don’t know what this position is, but it was over

We landed and I patted his neck and yelled “good boy.” Any pretensions towards decorum were gone. I didn’t care if people thought I was a nutcase. I just wanted him to feel confident. He wiggled a bit down the line to #3, but we made it over. 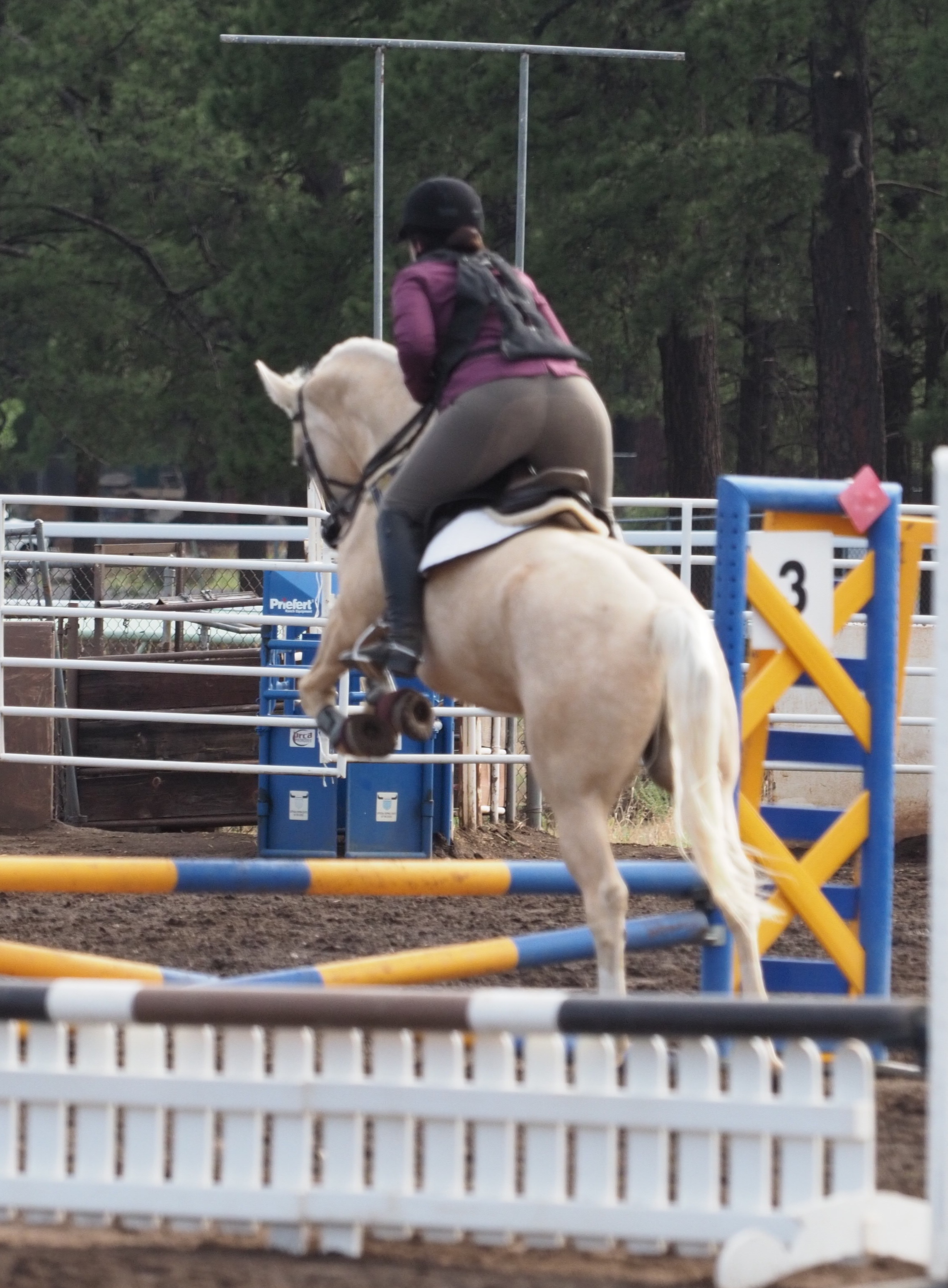 The corner after #3 that we had to go into before turning towards #4 was the scariest corner with the cattle chutes. Levi slowed to a crawl and there was no amount of leg that would get him to canter, but he didn’t spin or bolt. I continued talking to him and we managed to trot up to and over #4. 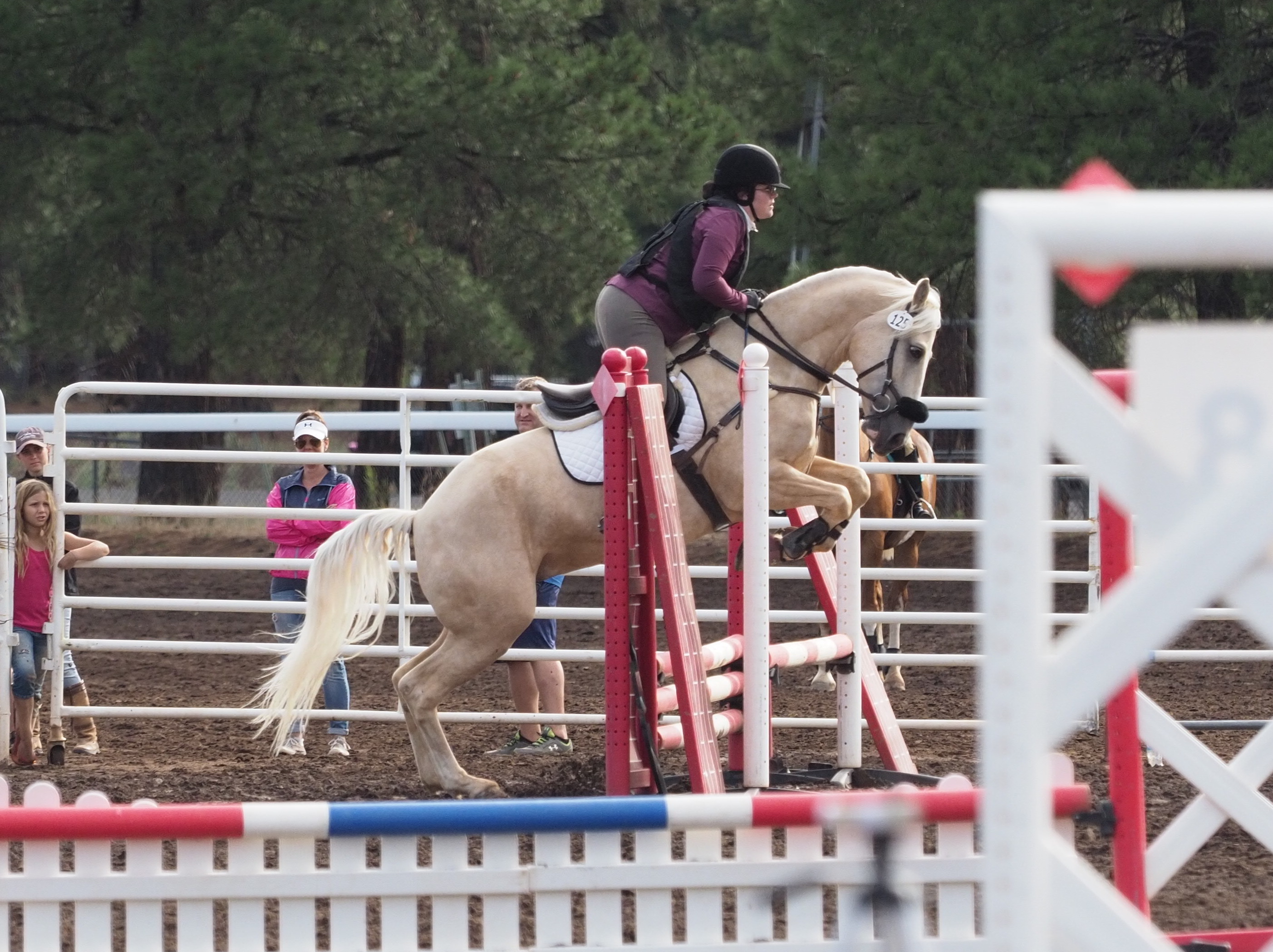 He skidded a bit going into #5, but I continued talking to him and yelling good boy at every jump. 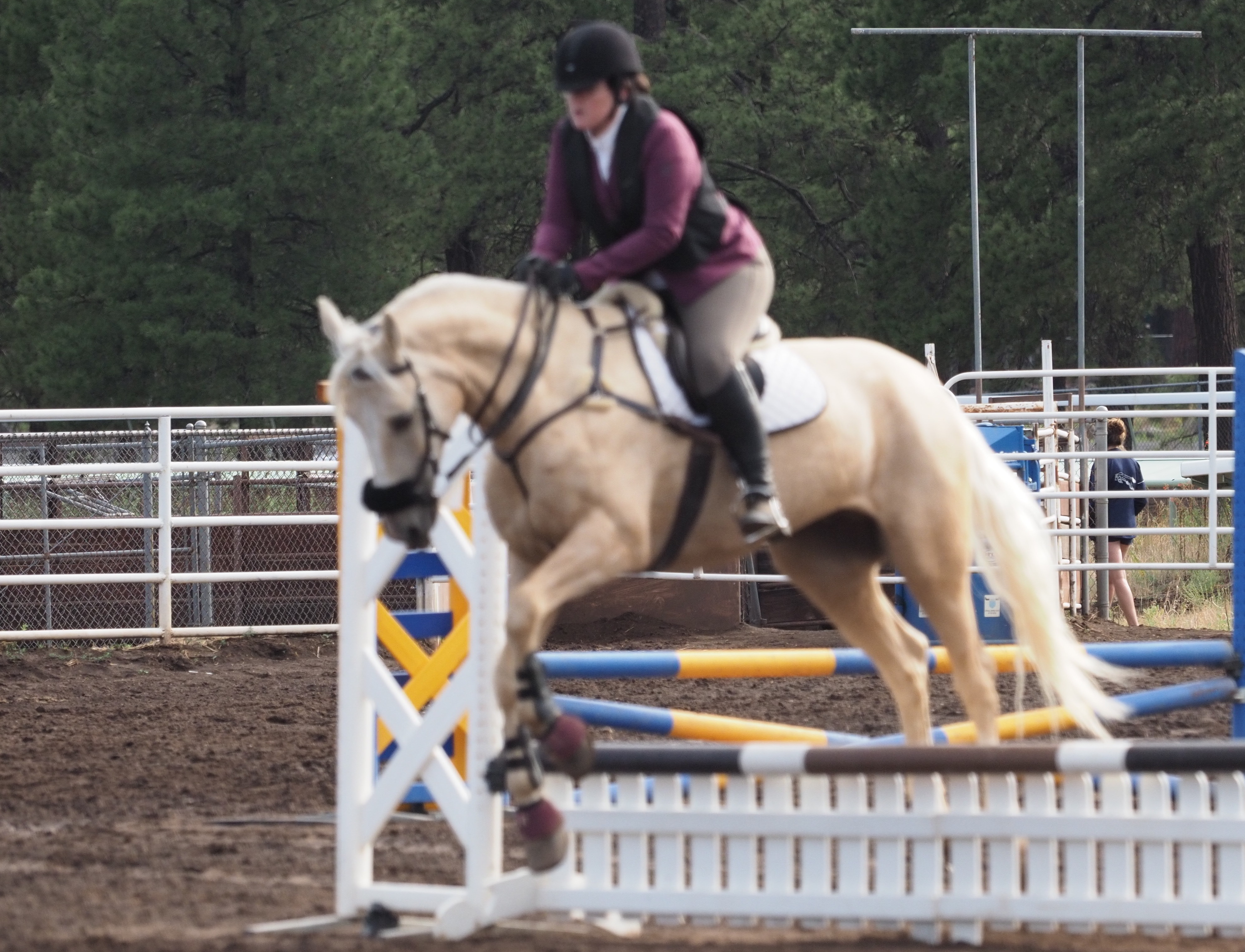 Jump #6 was along the far side from the cattle chutes, but there were a bunch of people hanging out there and golf carts and other equipment. He really didn’t want to go anywhere near the rail and I was like, too bad; you shouldn’t have wasted your refusals on those other jumps. He squirreled hard, but he did go over it. 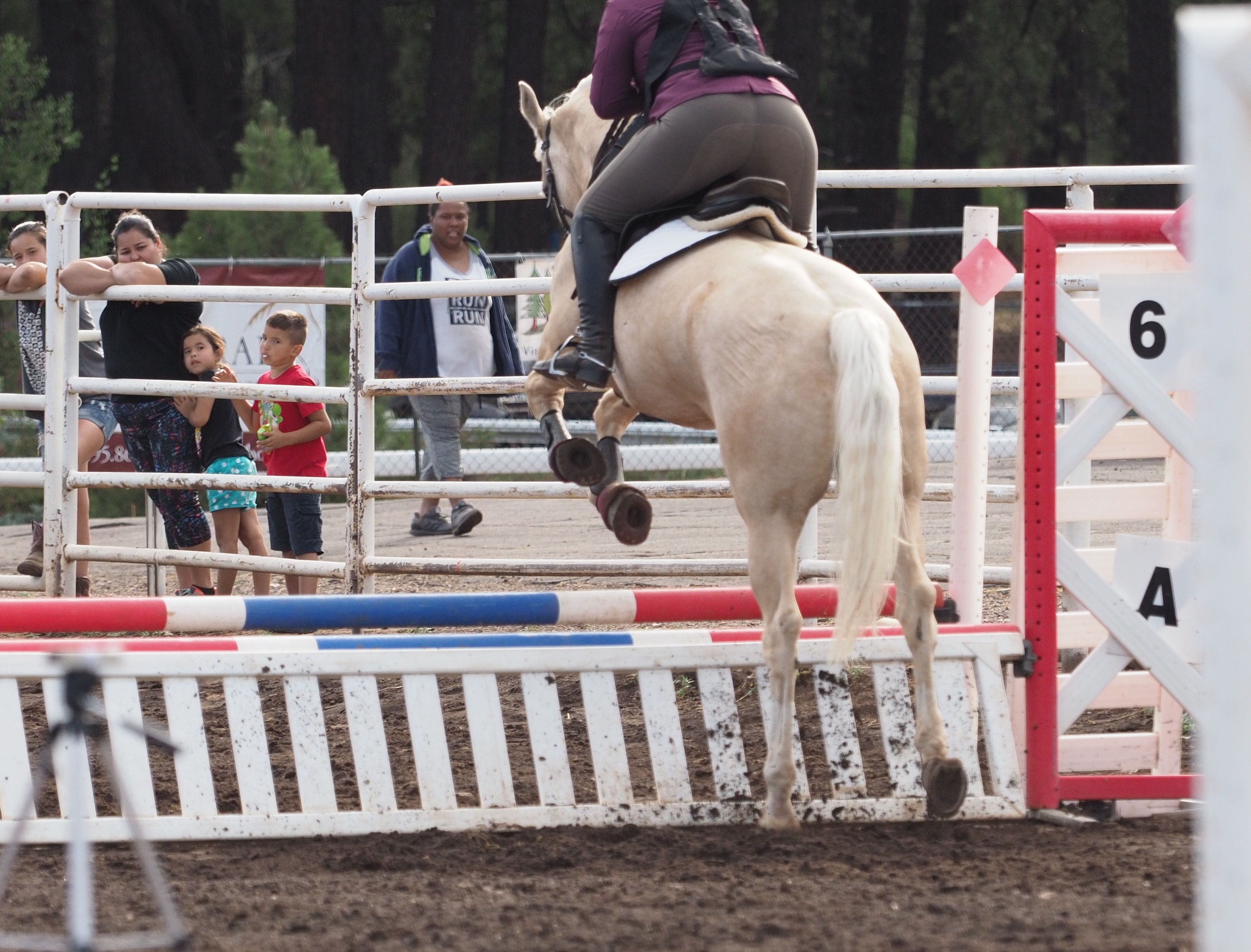 You can see the concerned audience watching us like WTF is wrong with that girl and that horse.

Jump #7 was right in the middle and a straight line down to Eugene. He was actually kinda of on a roll by now and jumped this one without wiggling or skidding to a near stop before hand.

Then it was down the line to #8 and we were over it and done. 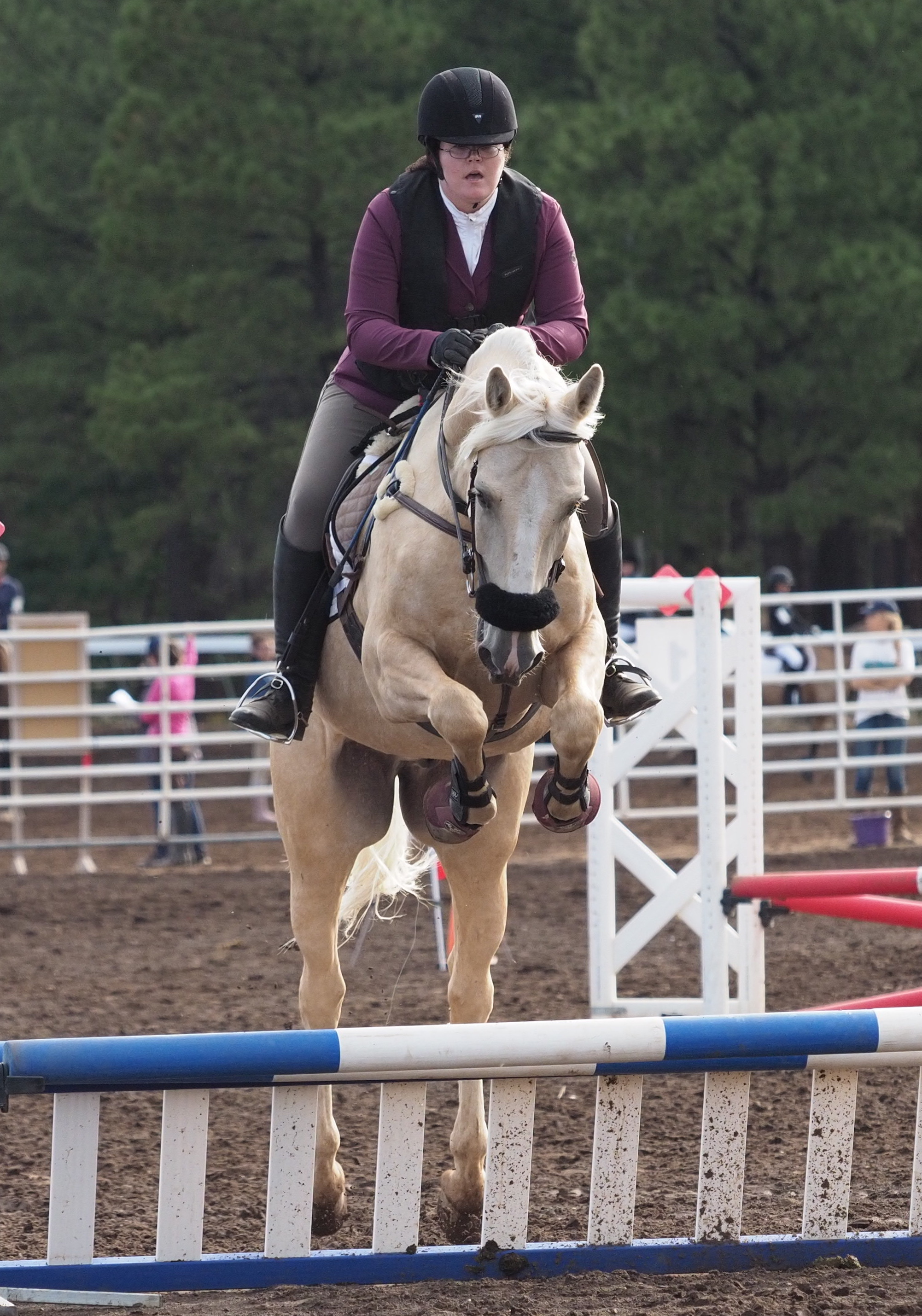 he even looks kinda good here

We ended up getting 73 time penalties. Honestly, I was lucky not to get eliminated for going over the max time. We somehow got 12 jump penalties though I am sure I didn’t knock anything down and only had the two refusals. I didn’t bother contesting it. I didn’t care. I was just happy not to get eliminated. I did move from 6th to 16th, but 2 people were eliminated in stadium (Levi was not alone in thinking that arena was scary) and I was aiming for a number and not a letter… even if that number was very large.