After the show and awards ceremony was over, we went over and got Levi tacked up for schooling. My plan was to just run him over the elementary course and see if he was going to behave/if he was feeling good. We warmed up and then popped over the little cross rail. His brain was engaged so we went out to jump tiny logs. 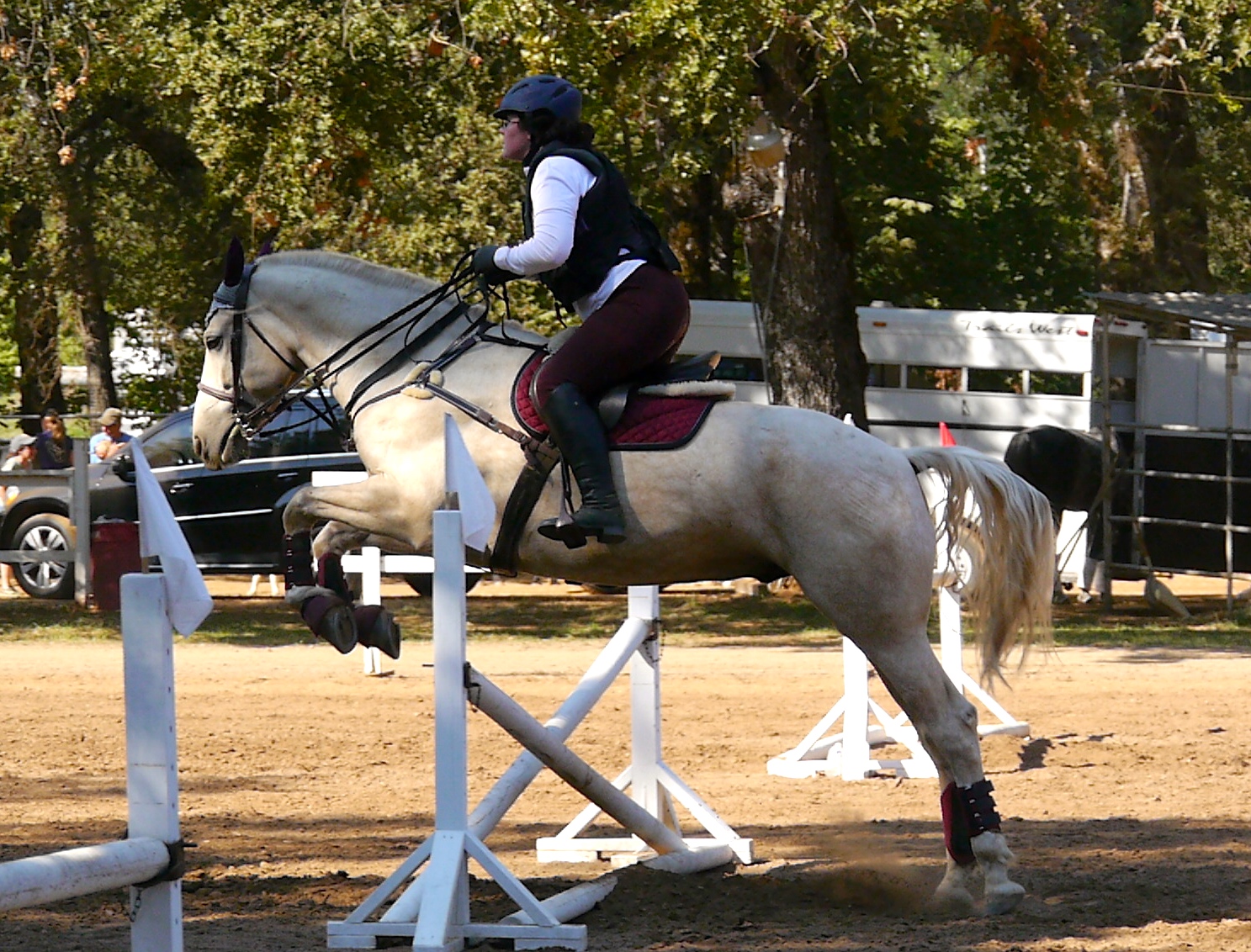 And I do mean tiny. They were so small, Levi wasn’t even over-jumping them. 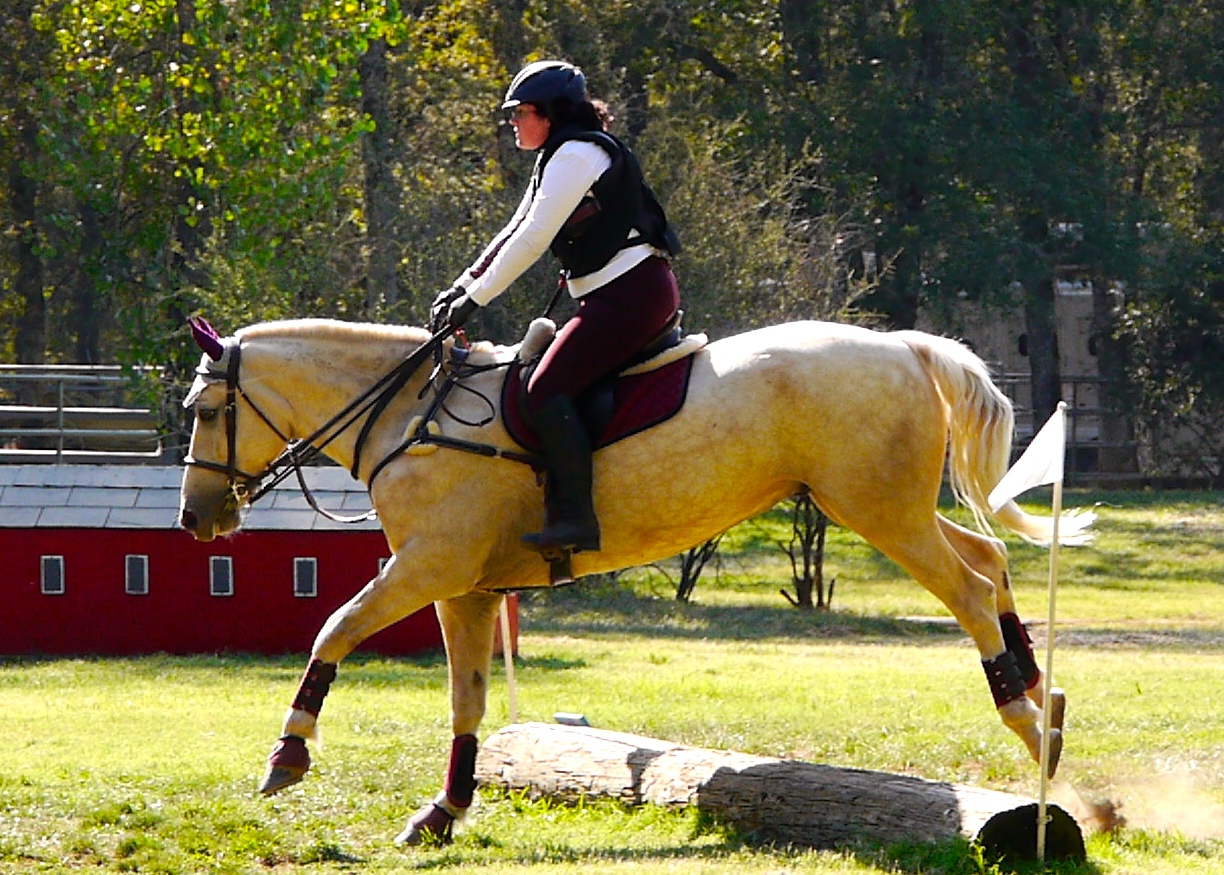 Because he was being so good, I let him do the smallest log on the BN course. 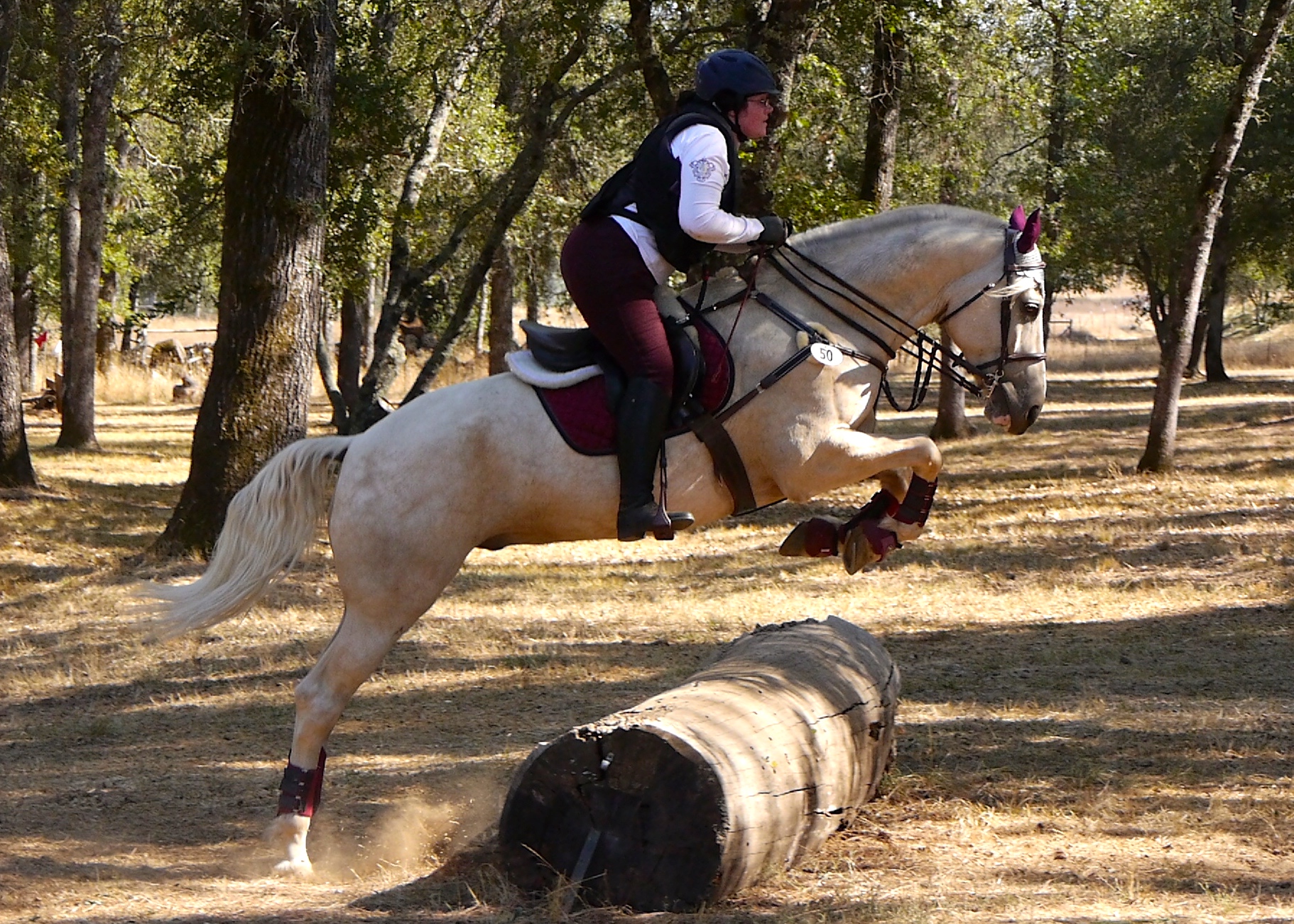 That woke him up though and there was some bucking afterwards. I took him back to the elementary course after that and we popped over the fake ditch and then the little log on a hill. 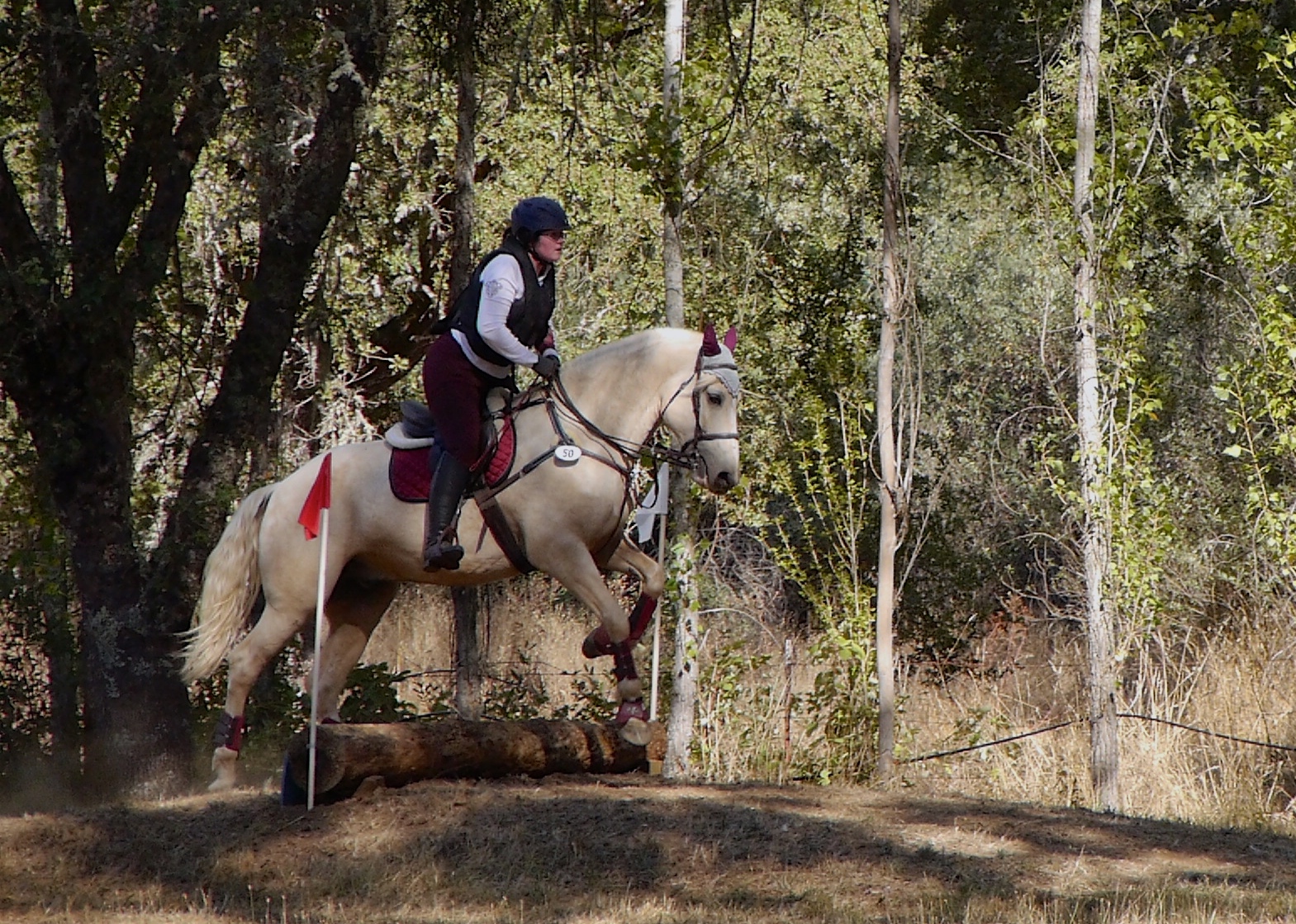 He was calm and quiet and cantered off in a relaxed manner. The 8th jump was a tiny little down back. Like seriously 6″ tall max. But Levi is a little dumb about down banks and, even though we were trotting, thought it needed jumping. 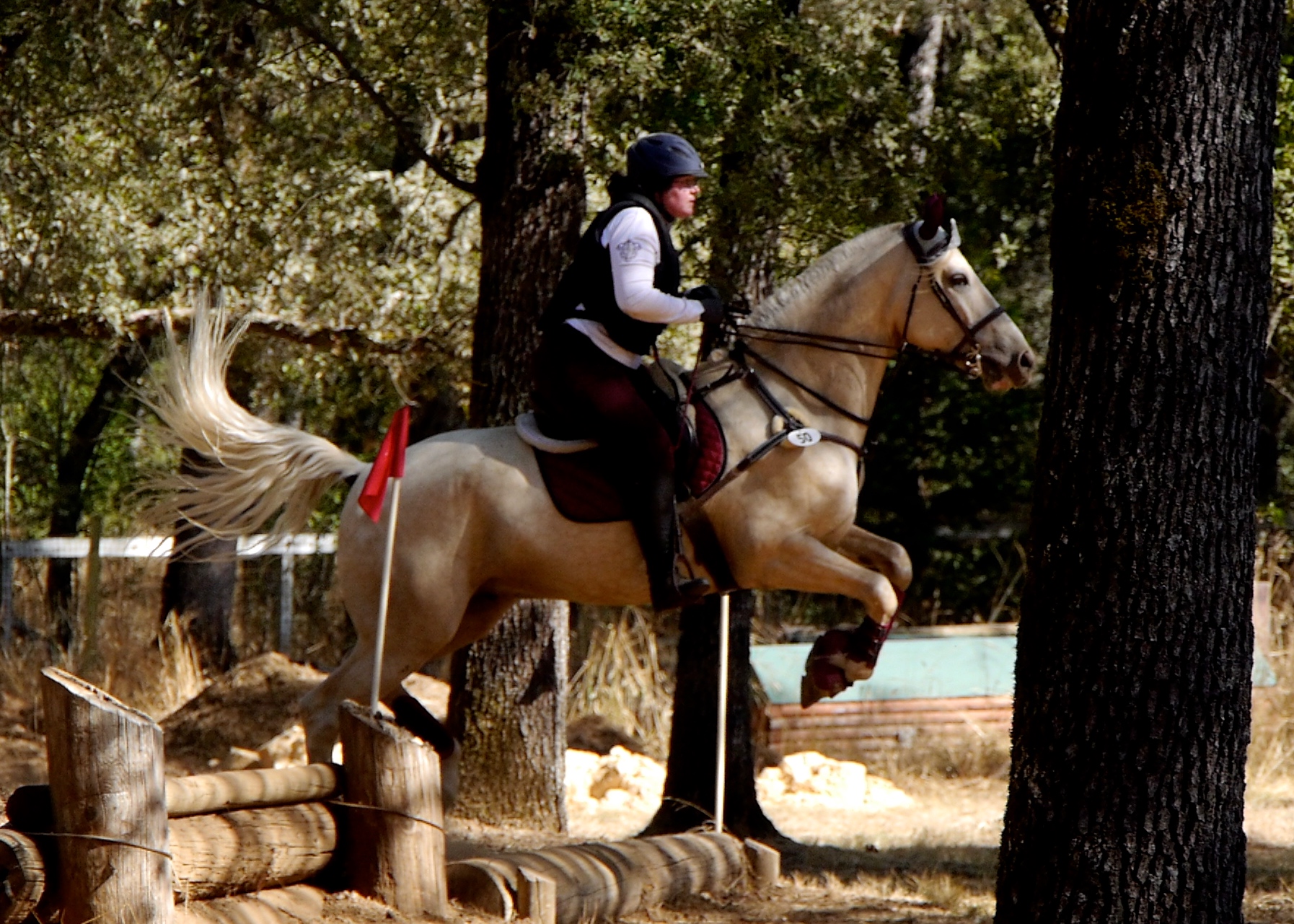 Because I wasn’t really prepared for such a leap, I hit him in the mouth a bit on landing so I decided to try it again and grab the next strap. This was not a good plan. Grabbing the neck strap had the unfortunate side effect of causing me to lean forward, which is never a good idea at a down bank and it’s really not when your horse has decided this is how to handle down banks: 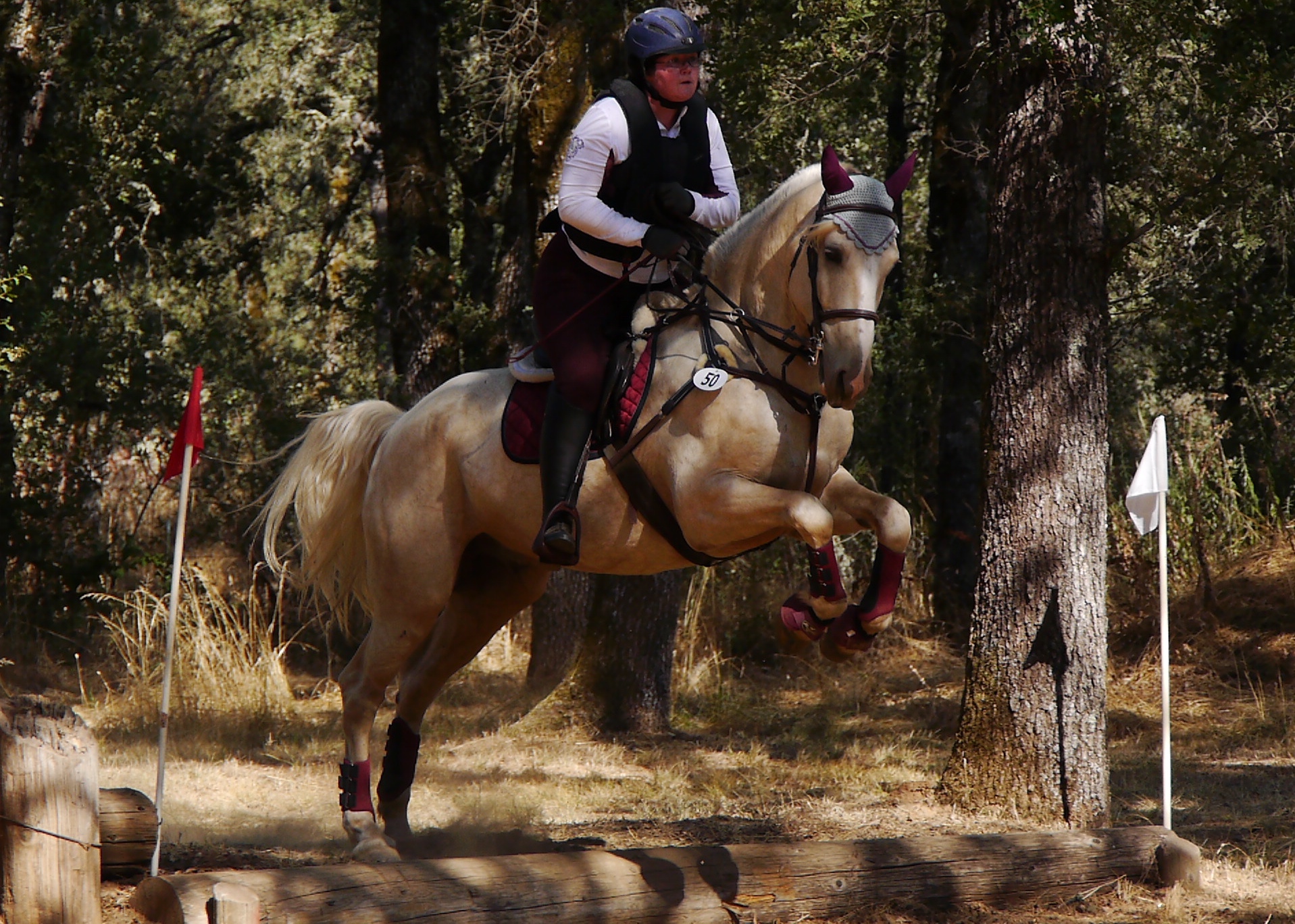 Please make sure to note my expression. I already know this isn’t going to end well.

A desperate attempt was made to sit back as far as possible, but my expression says I know it’s too late. 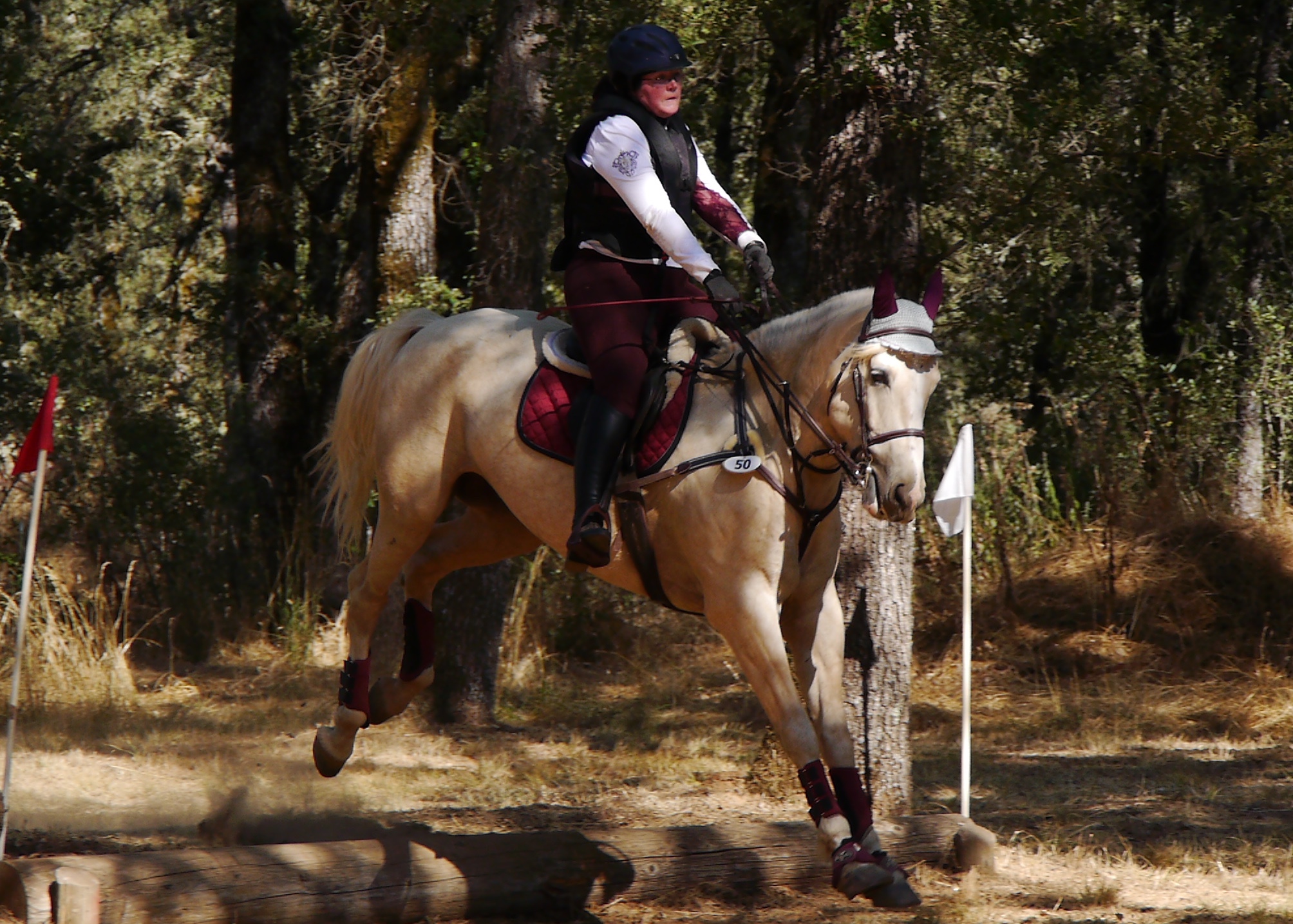 Sass-panda landed bucking and thankfully my husband knows not to stop taking pictures no matter what so you get this: 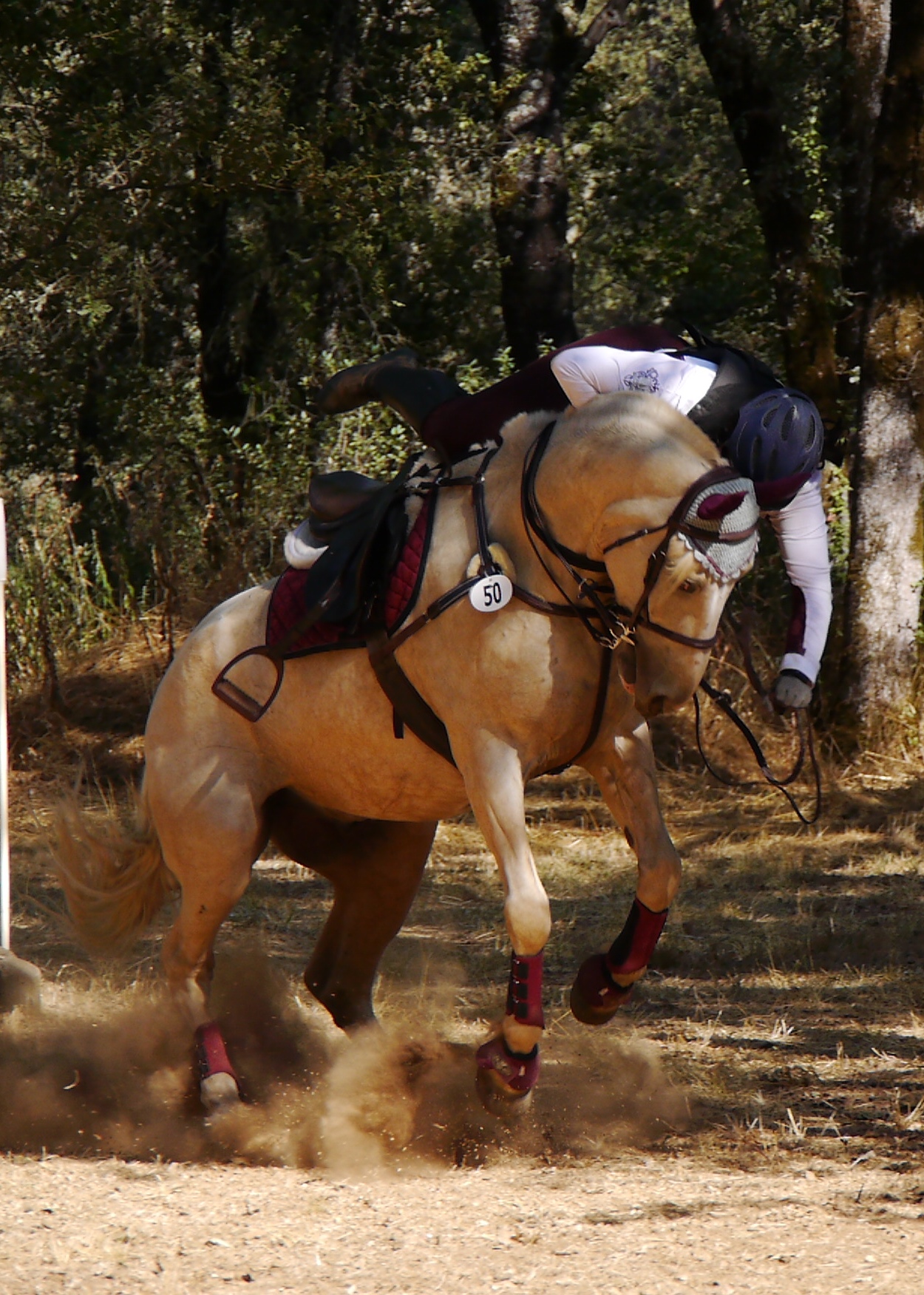 Asshole. Thank god for air vests. I hopped back on and we returned to the bank. I was already only trotting – slowly – but we backed it up a step and walked back and forth up and down the bank a few times until he figured out that he didn’t need to jump the 6″ bank. Then we trotted down it like a normal god damned horse. 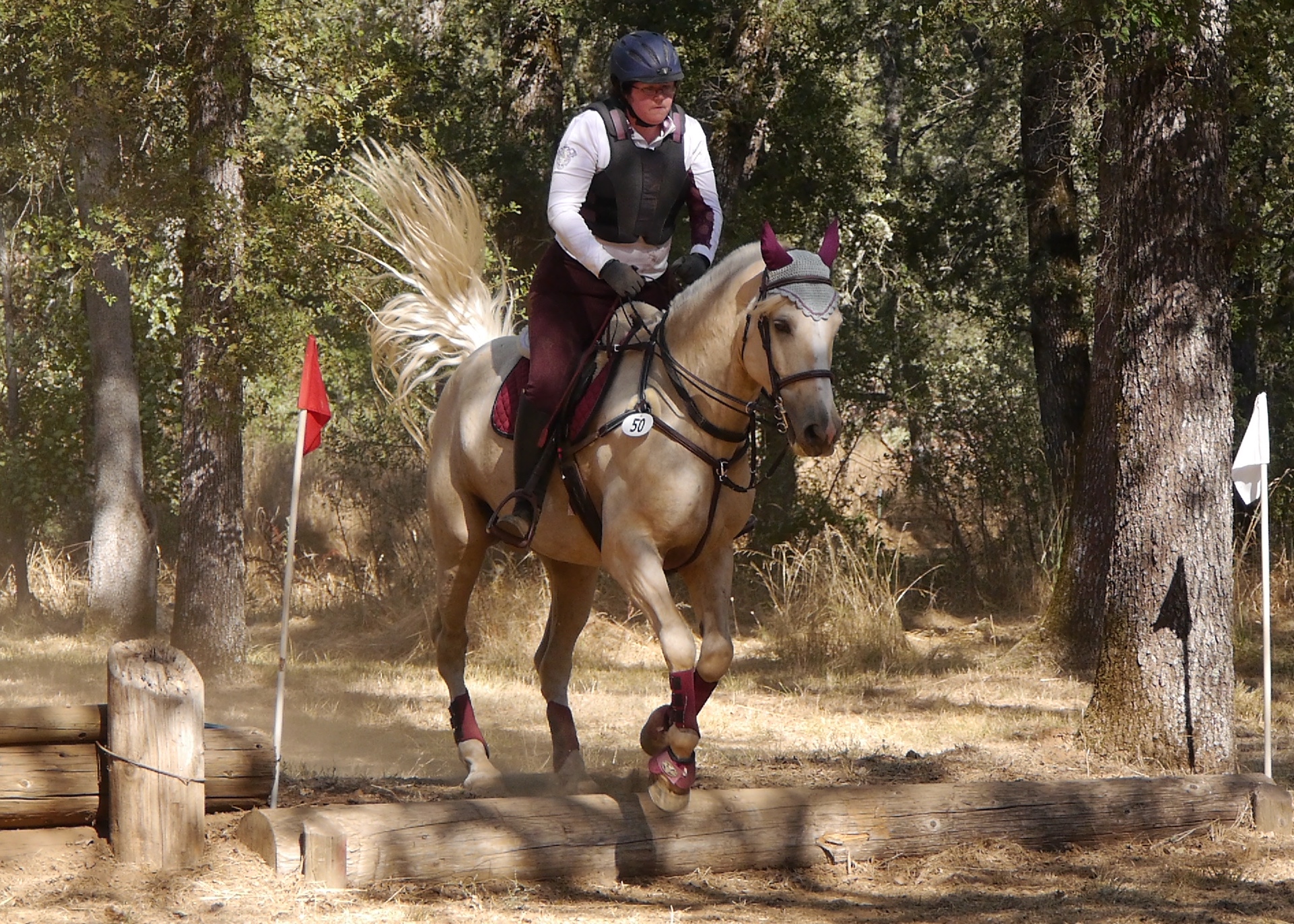 I like our mutual expressions of “this is stupid”

Once we finally mastered the bank, we carried on to the next small log, but by now Levi was convinced he was going to die alone in the woods and had started screaming for Eugene and jigging all over the place. 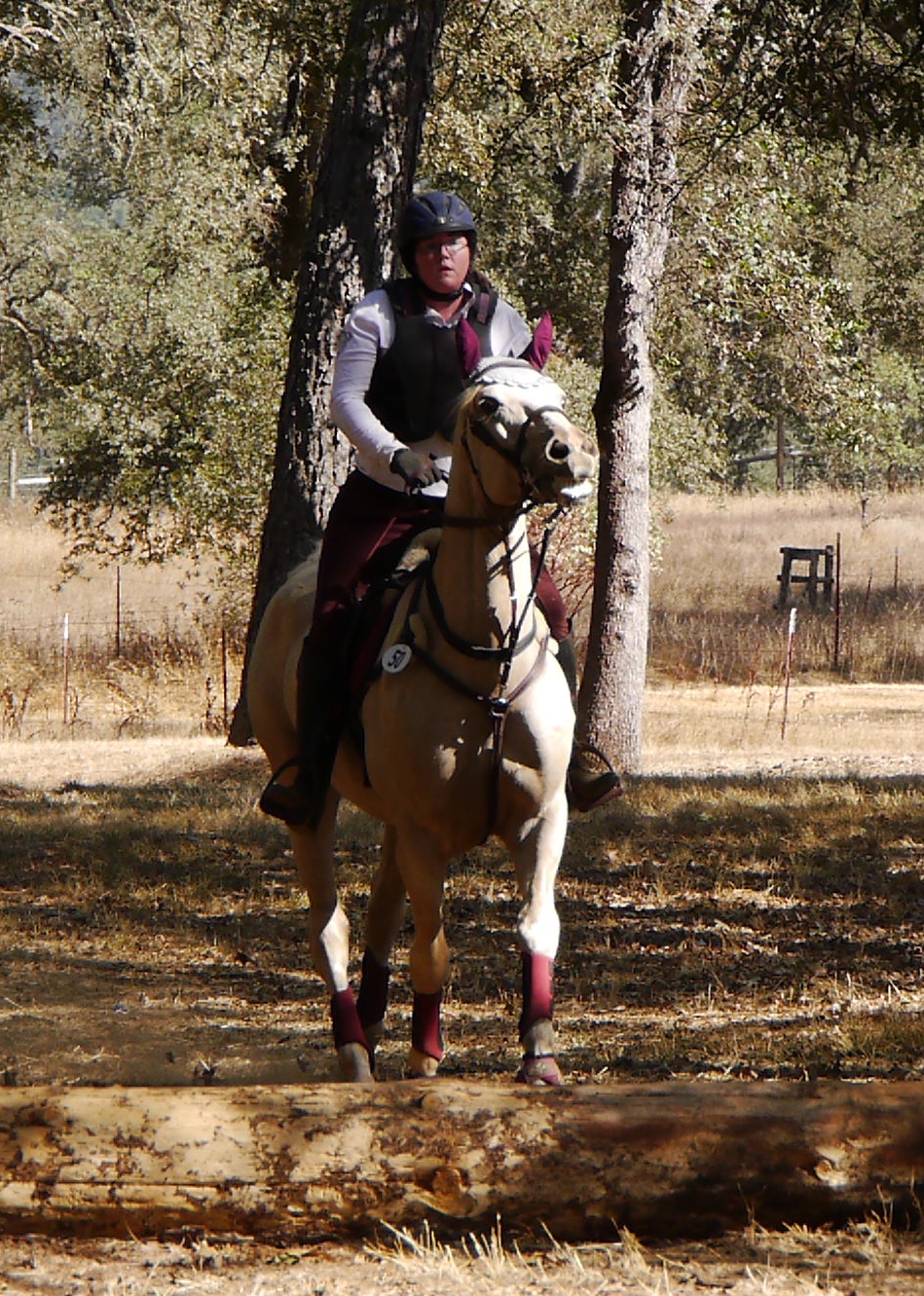 I did eventually get him to go over the jump in a reasonable fashion, though you’ll note I was keeping my hands up after that. 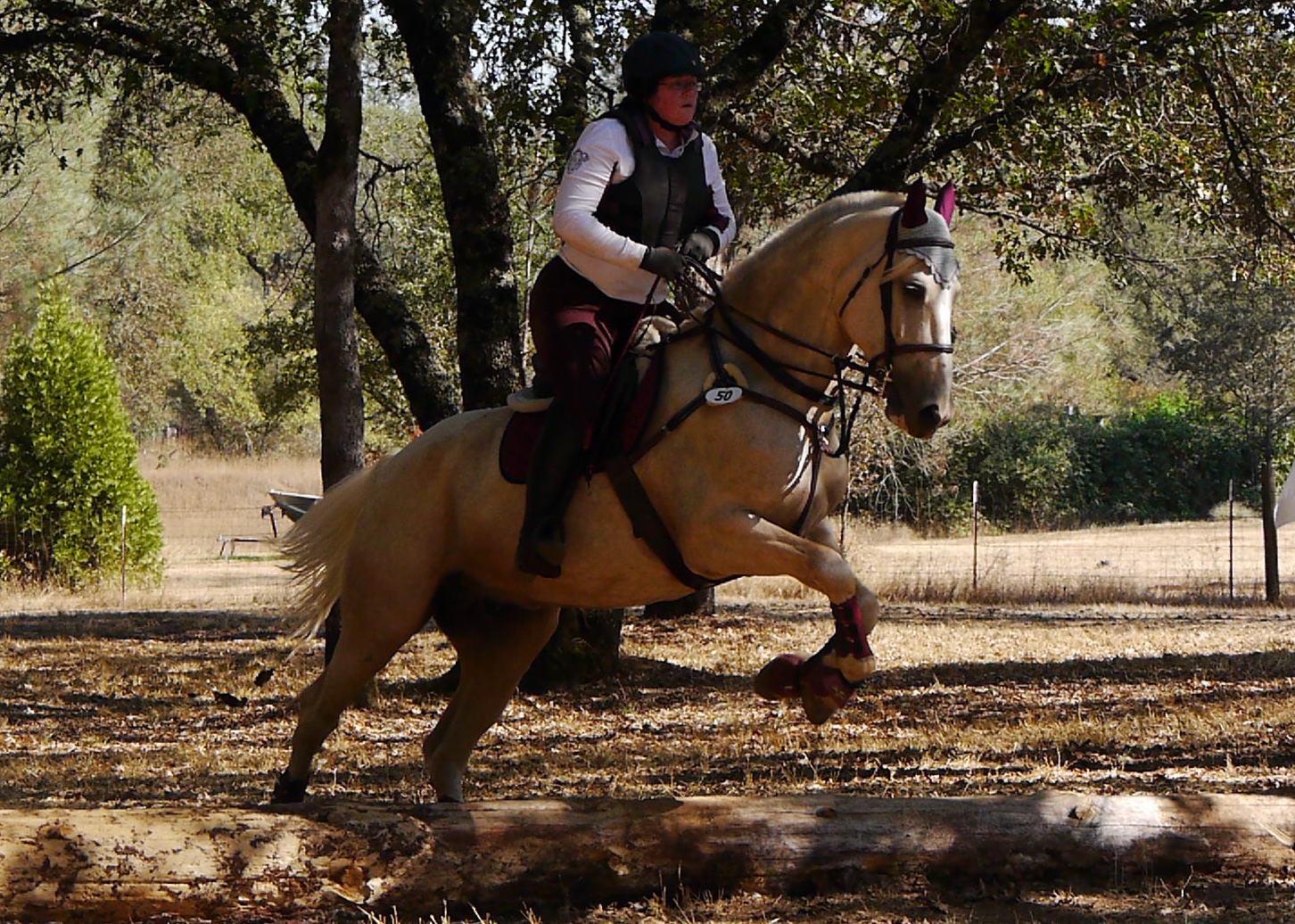 We did that a few time and then did a few more small logs before calling it a day. It’s frustrating to go from doing BN at the derby the week before to incapable of doing elementary, but he’s a green horse and ups and downs are to be expected.