*I asked my husband if he wanted to write up his own post on competing Eugene at Eventful Acres and he agreed. Enjoy a special guest post!

Eugene’s very first multi-day event was at Eventful Acres last year win the Elementary division, and I’ve been looking forward to getting back there again – it really is a great venue. Unfortunately, Eugene missed out on our return earlier this summer for the Adult Horse Camp. But now that he’s feeling better, I was happy to be headed up this weekend to try our hand at BN in our first multi-day event since the Spring Event at Woodside.

Prior to this weekend we’ve been doing some preparation, including having weekly lessons to help remind both of us of how this whole dressage and show jumping thing works after our time off. Cross country we’ve got pretty well covered, but “gallop and flying leap” doesn’t work quite so well when you’re looking for free walk and rollbacks.

Once we got to EA Friday afternoon we took some time to warm up the horses a bit and get them moving after the long trailer ride, then walked them over into the stadium to peek at all the well-decorated jumps that were set up. Almost all of them looked like they had the potential to be spooky, but it was jump 6 – with giant butterfly standards – that I was pretty sure was going to be the worst. Eugene definitely agreed – the initial approach involved some skittering sideways and snorting, so it was a good thing that we got to take a look at the jumps in advance. To my surprise, though, that was the only one that gave us any issues, so after looking at the rest of them we headed back to the trailer to untack and put the horses away for the night.

The question for the next morning was what to do about warmup. At the Spring Event at Woodside my dressage test was in the afternoon. That fits pretty well with my preferred schedule of not getting up early. At Woodside, I did some initial warm-up and practice in the morning with Eugene, followed by just a very quick warm-up prior to the actual test. That proved very effective at helping him stay calm and focused for the test as he gets anxious during warm up. Unfortunately, our tests at EA were earlier in the morning and so I decided to forgo that sort of multi-staged warm up in favor of just hopping on and warming up directly before the test.

In hindsight, this was not a good plan. When I first got on, Eugene was actually pretty calm, but as time ticked passed and all of the horses around him were working, he got more and more uptight. I think the area in which we were warming up contributed to this, since it was a large grassy area that was actually part of the cross country course. With other horses running around and no enclosed “arena” feeling, Eugene just didn’t know where to look or what to pay attention to. He just knew that this was not a place for fancy dressage movements and that he really needed to be going somewhere- anywhere- faster than we were currently going. Clearly all these other horses were going places and that must mean the wolves were on their way for him.

For the last ten minutes or so I fell back to mostly walking with some walk/trot transitions thrown in, hoping to let him relax. It didn’t work so well, but oh well- eventually it was our turn to head on in. His anxiety and tension were basically the theme for the entire test. 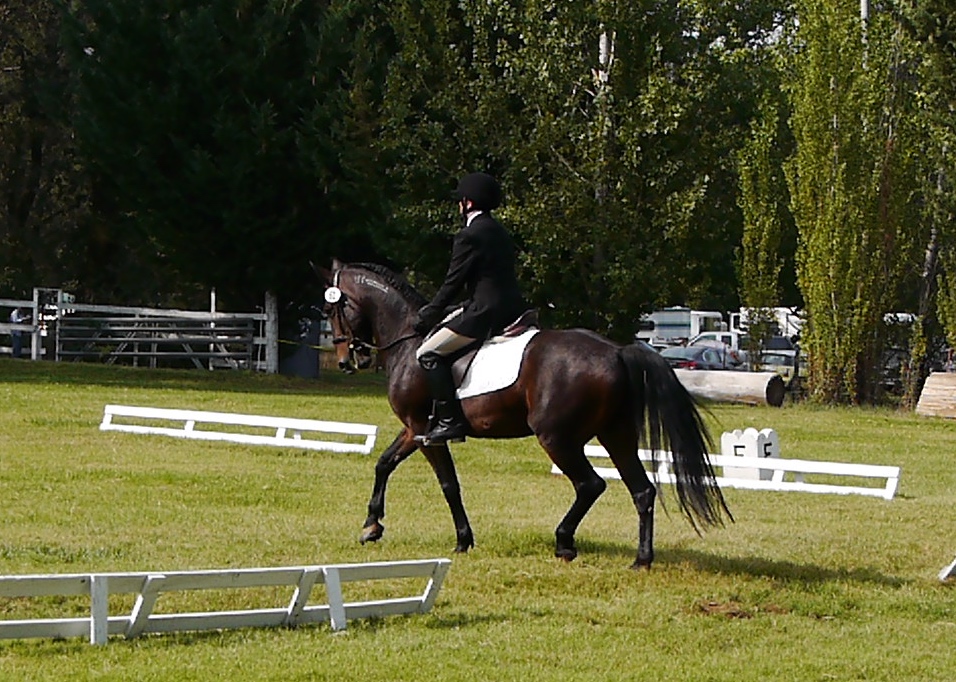 Attempting to keep him to a consistent pace was an ongoing struggle. 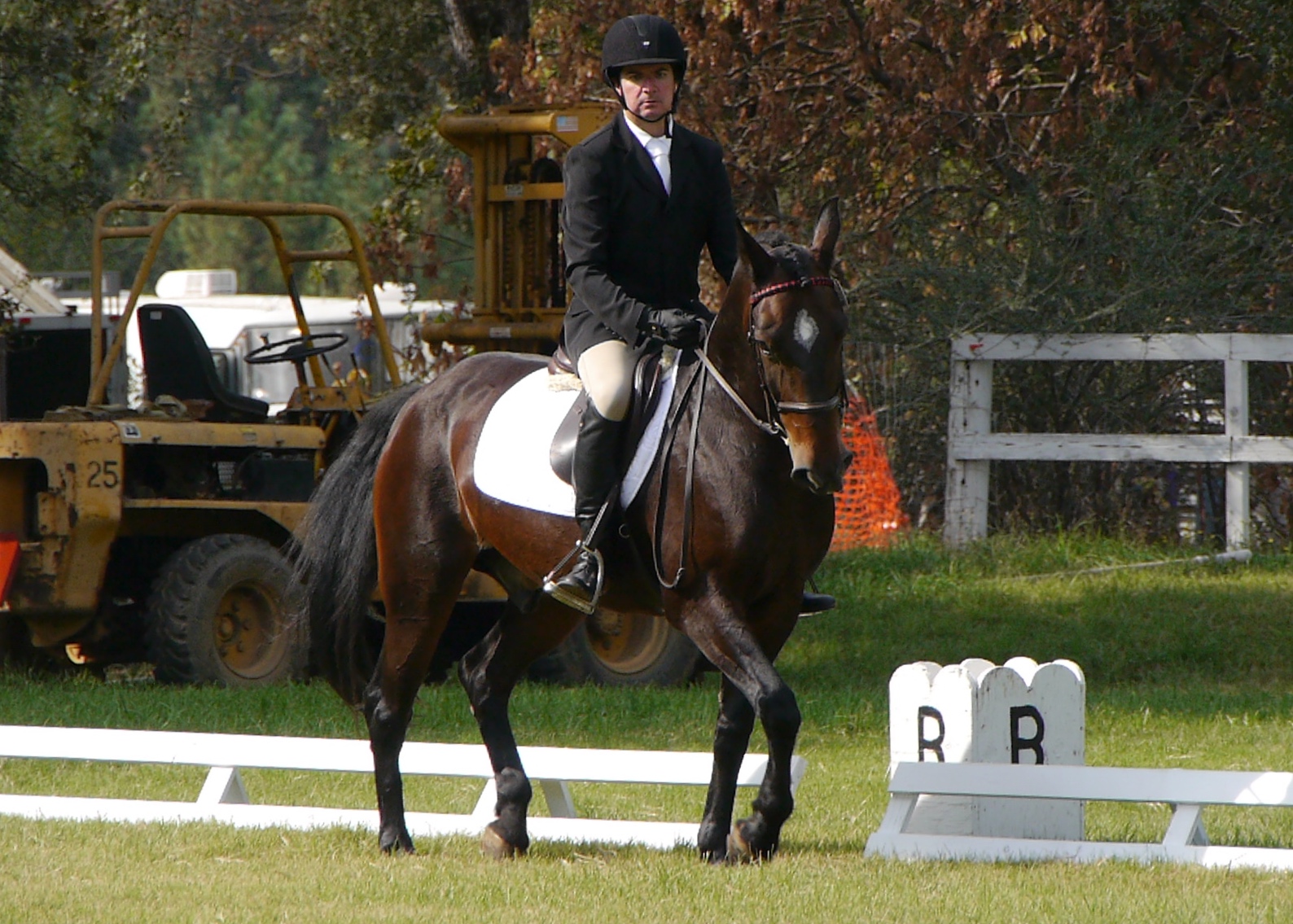 Eugene had much more important things to worry about than silly requests to bend or collect, and he definitely needed his head in the air so he could keep an eye out for those wolves. 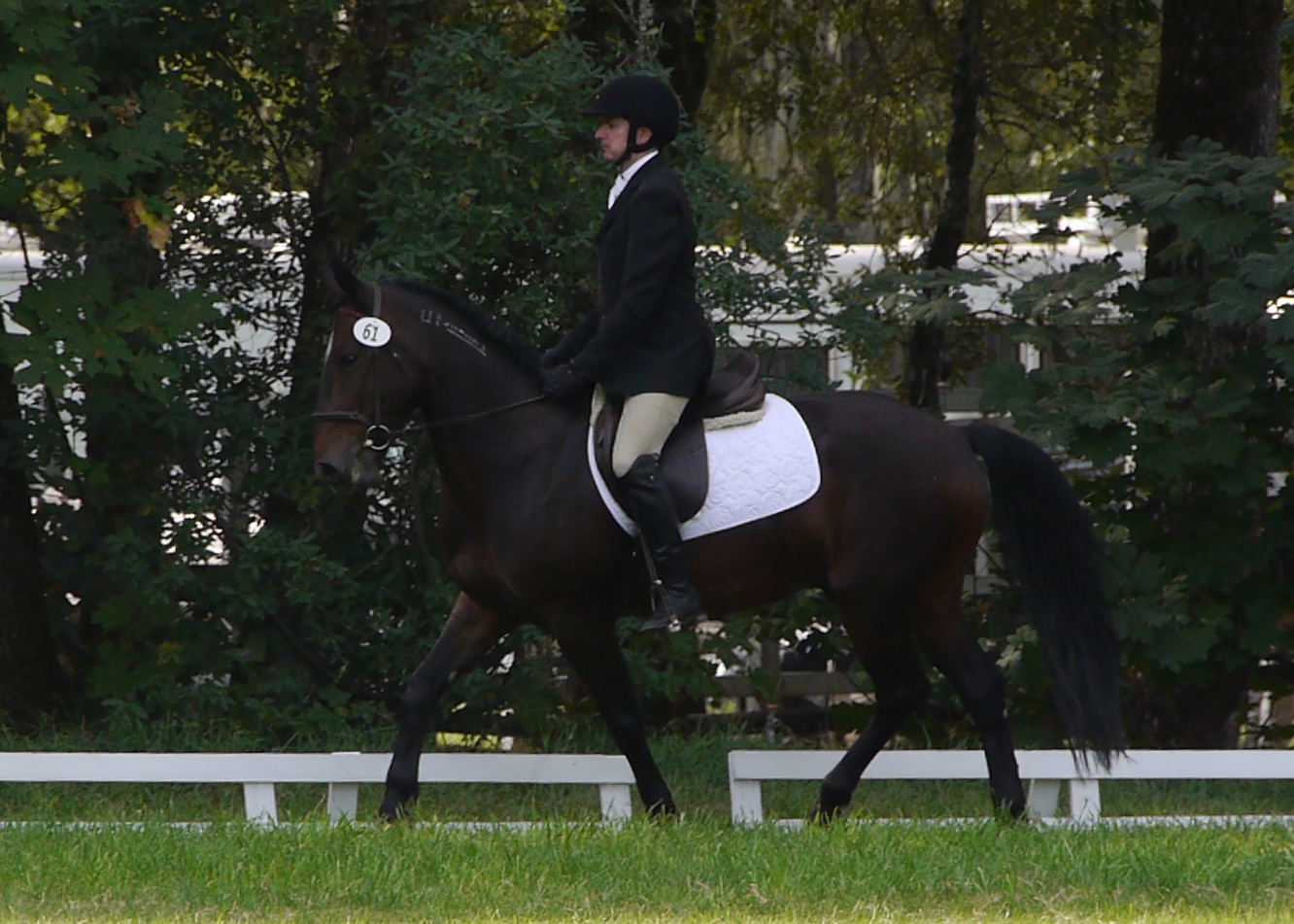 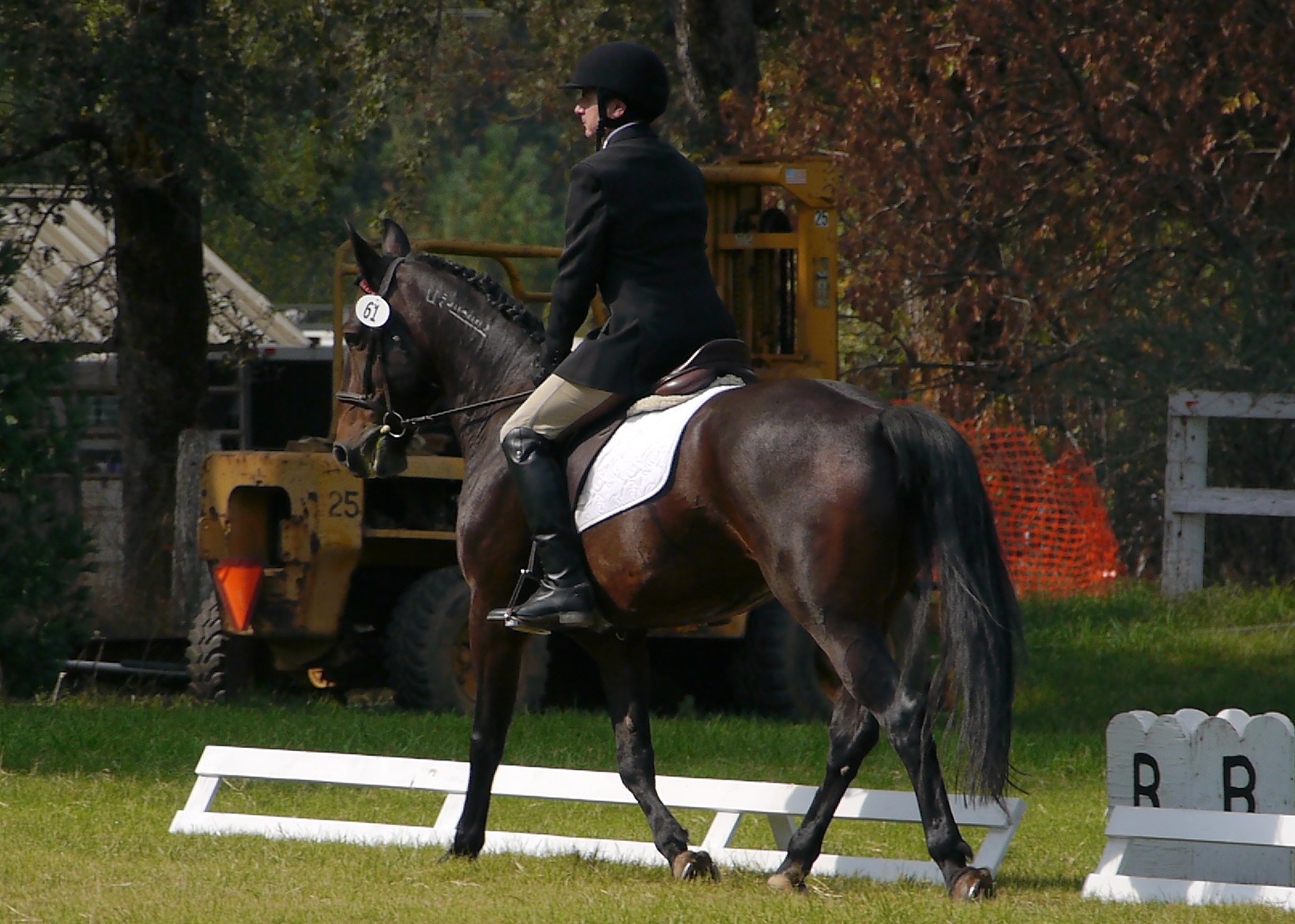 You mean that tense neck isn’t what we’re going for here? 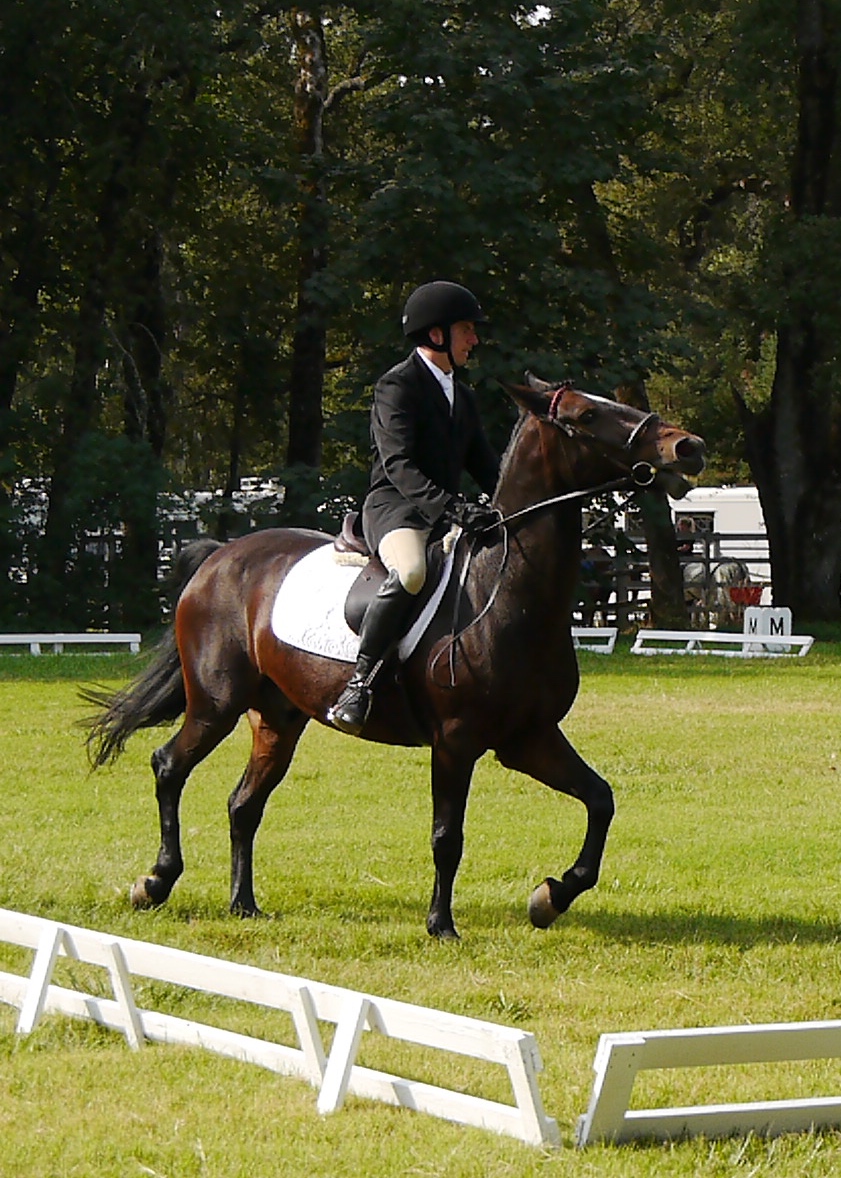 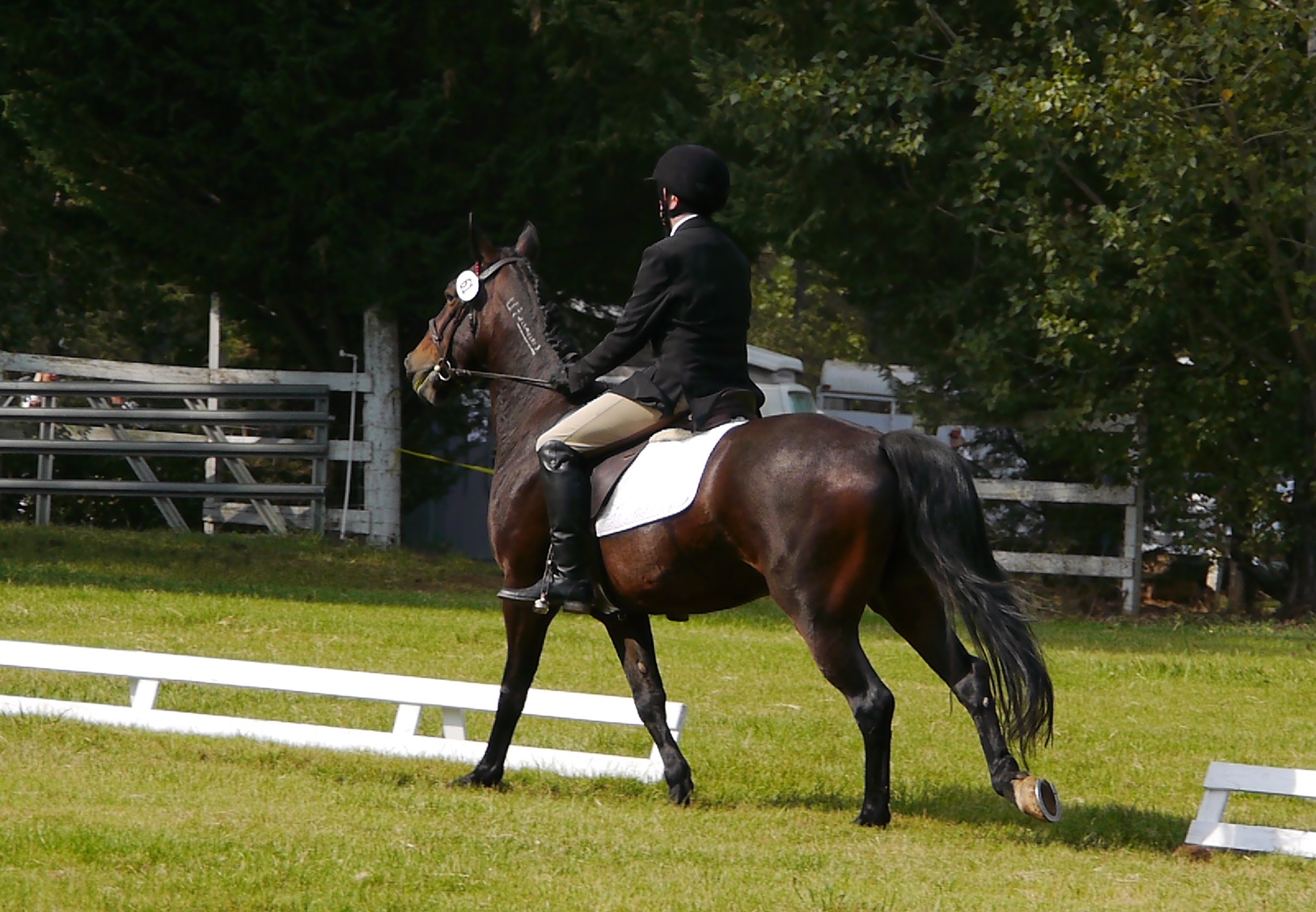 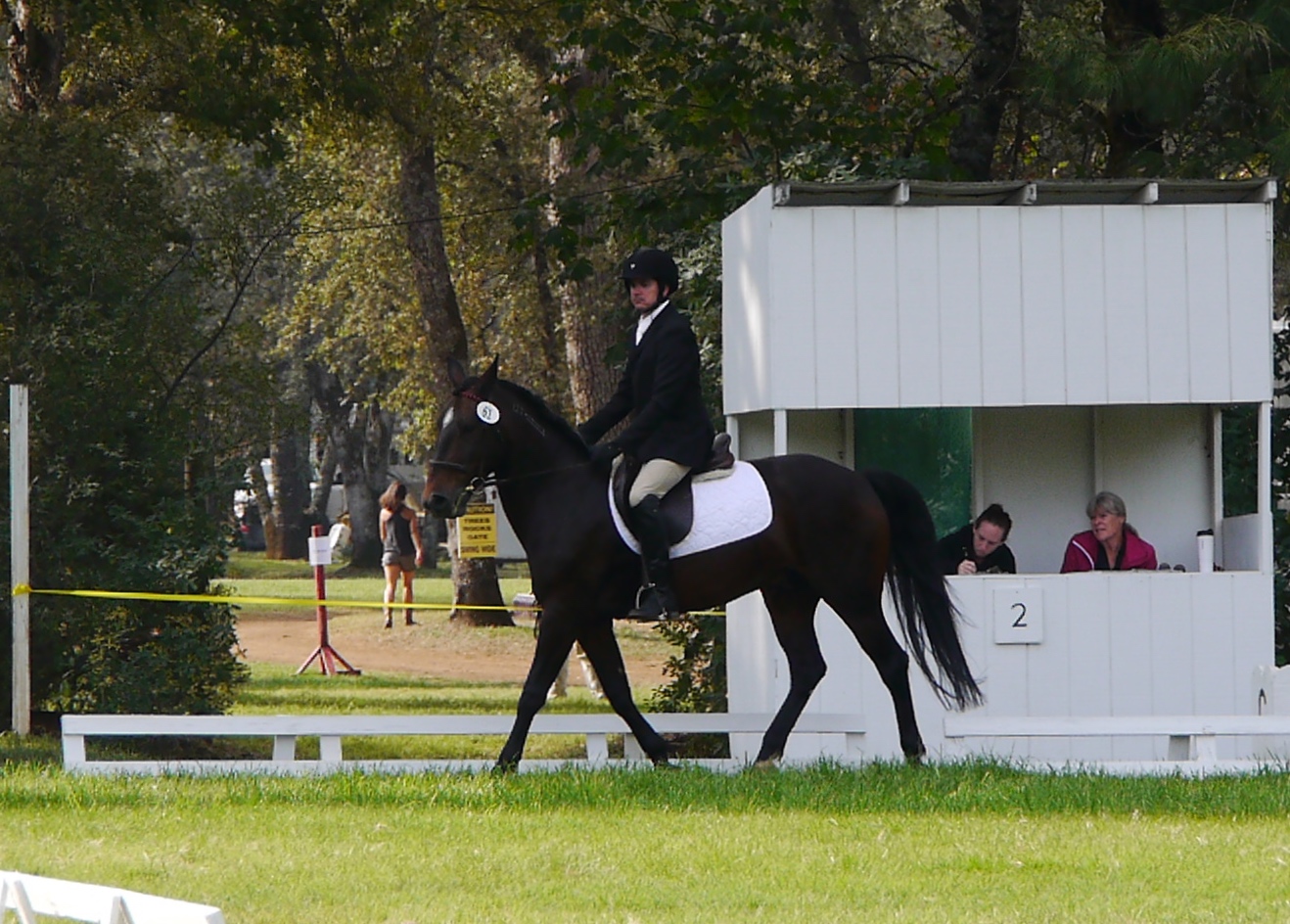 By this point he’d settled a little bit, at least as far as fighting me on tempo was concerned- we’d arrived at a bit of a truce. 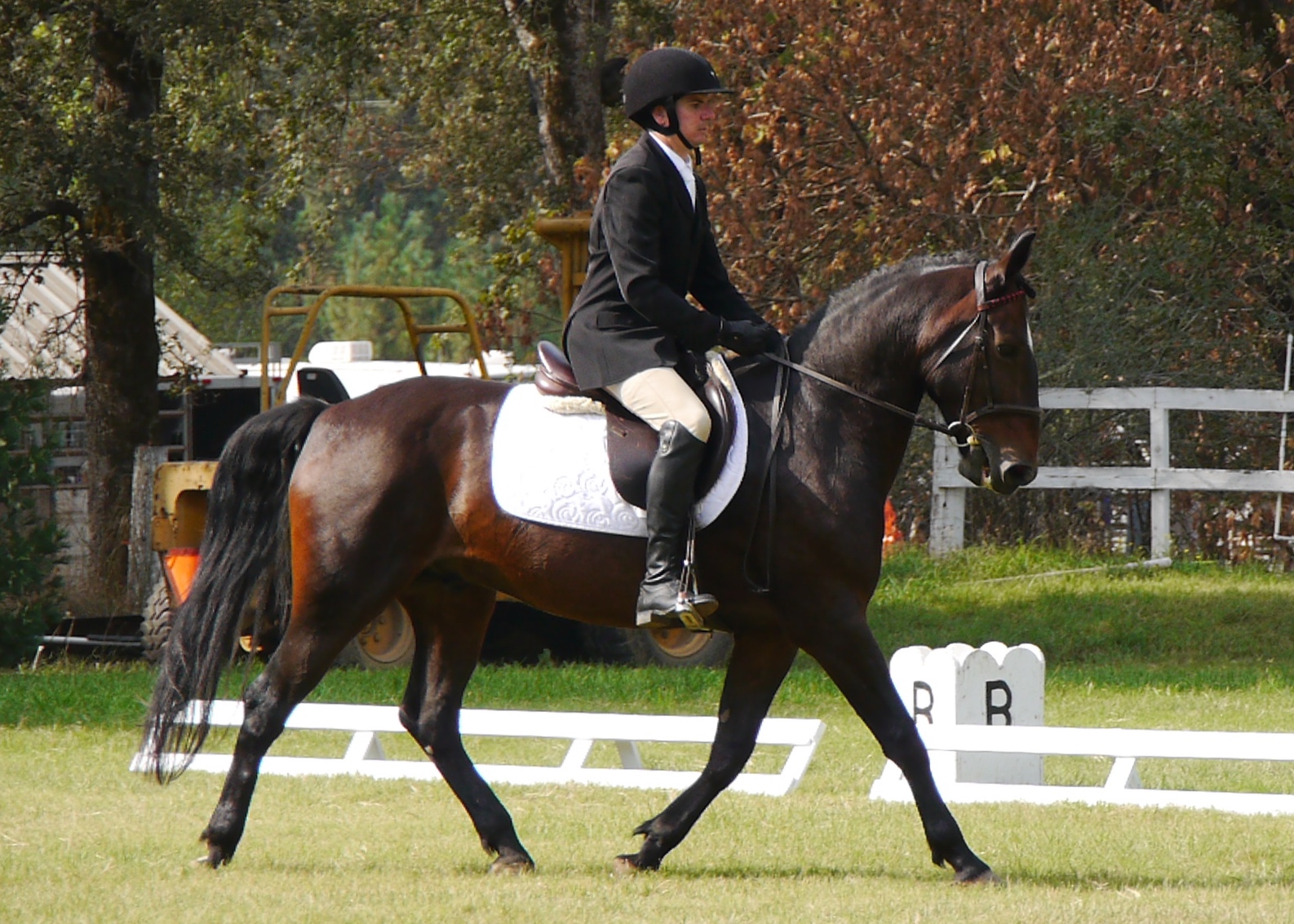 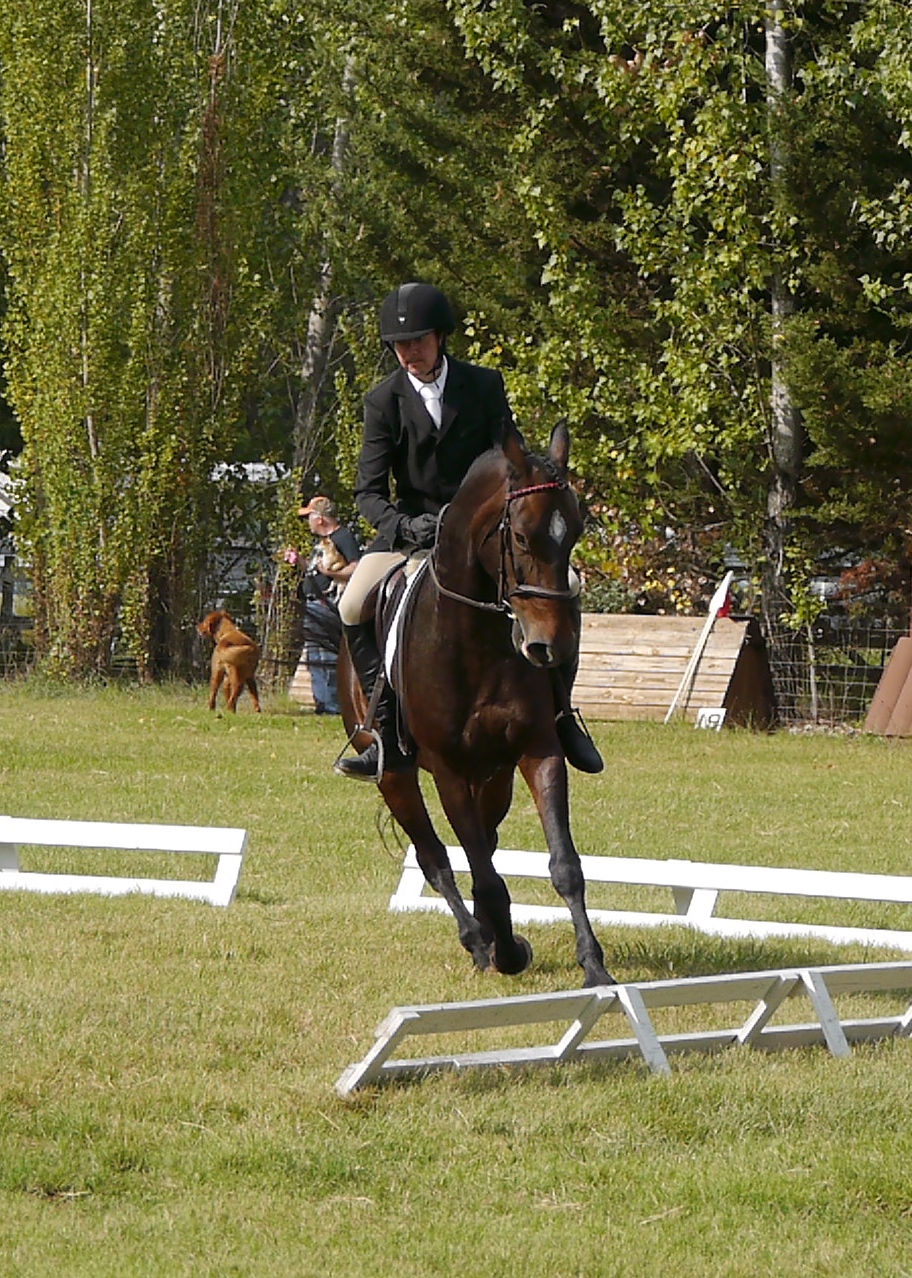 Yes! Canter! Finally, we can escape the wolves! 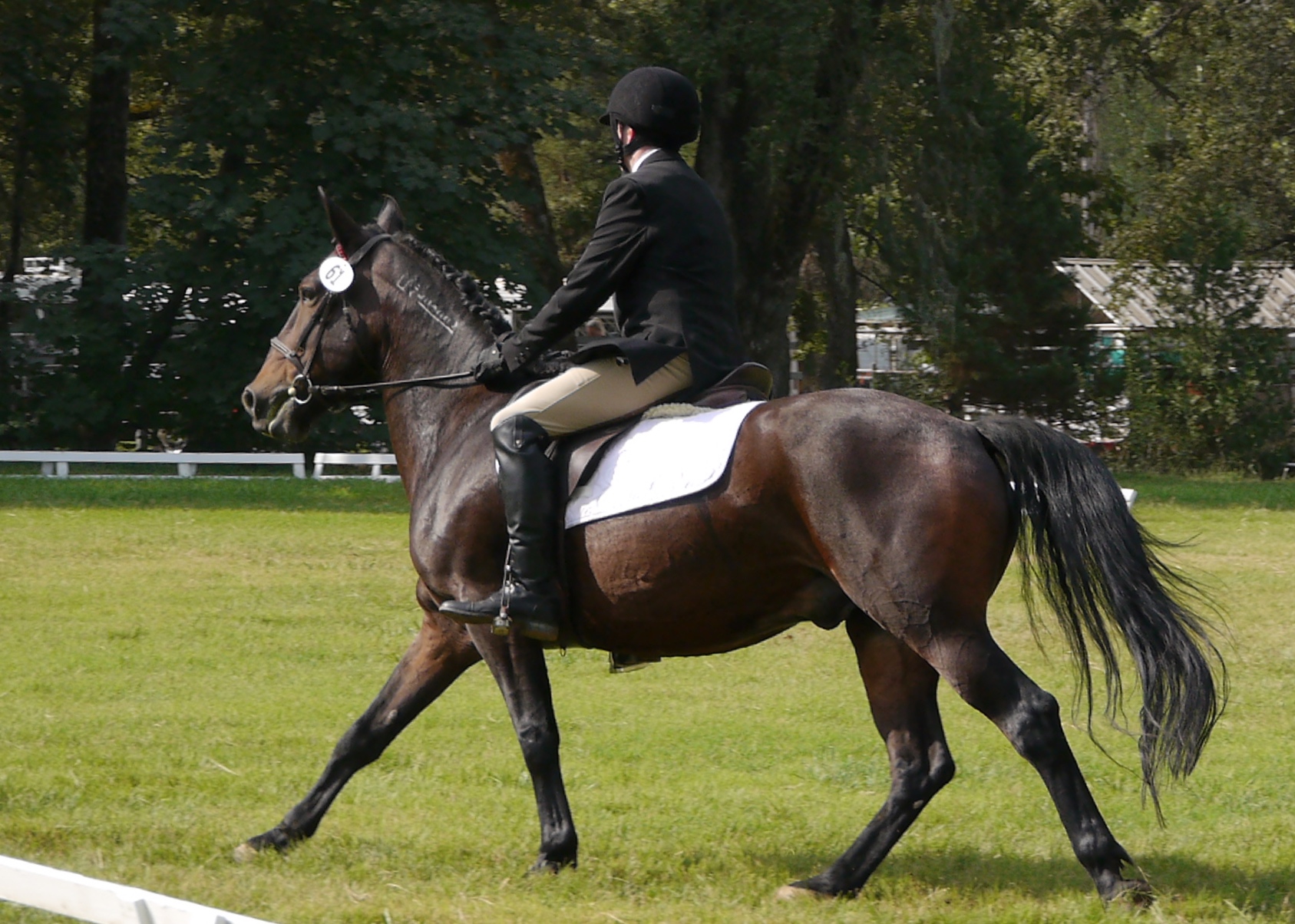 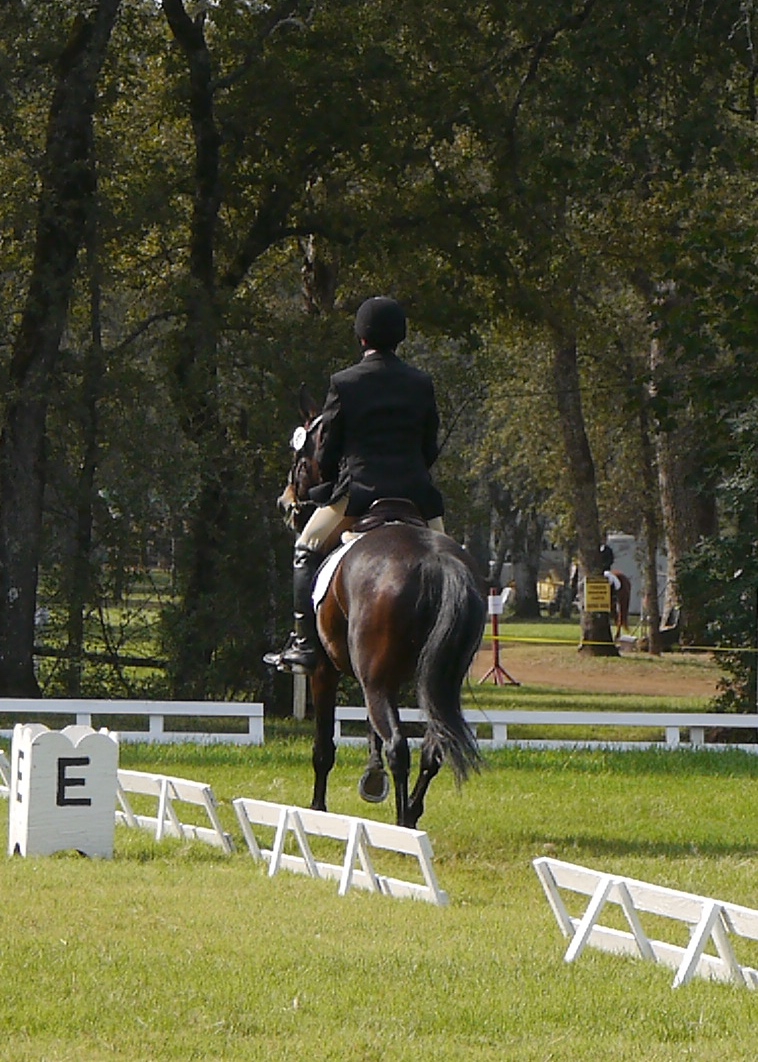 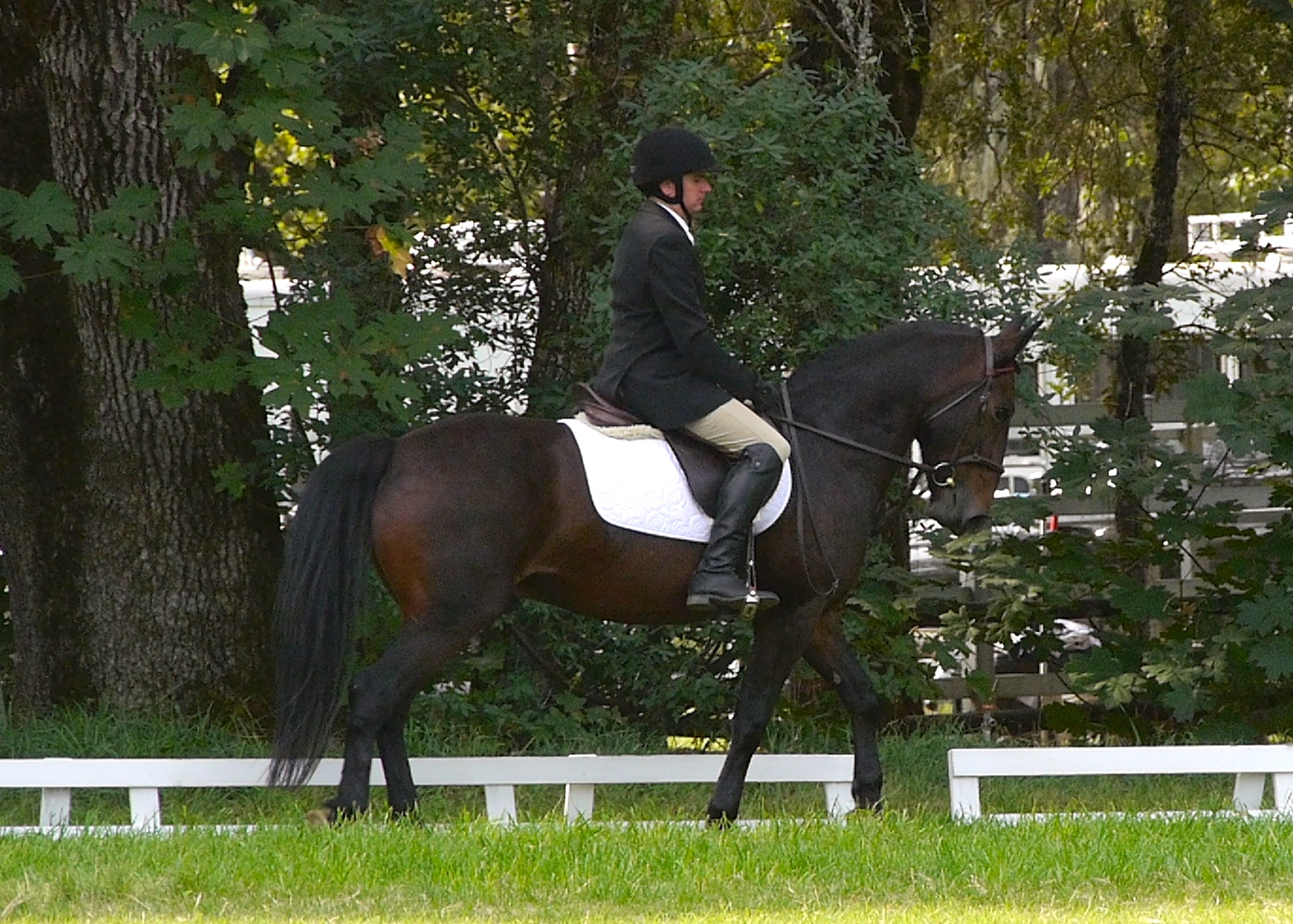 Walk!? Are you *trying* to let the wolves catch us? 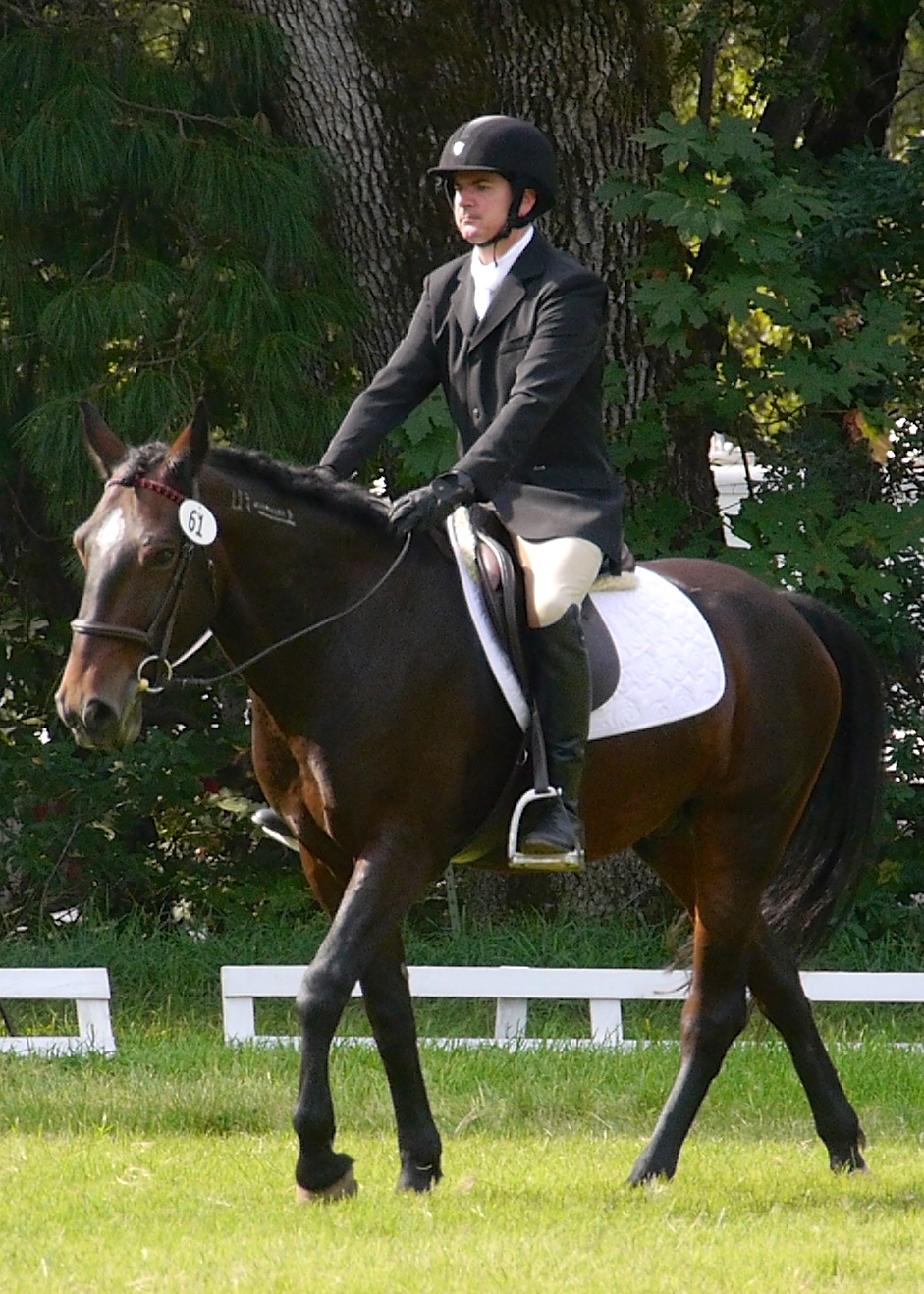 Honestly, this is more stretch than I was expecting out of him given how the test started. I’m impressed that he didn’t try at all to break into trot. 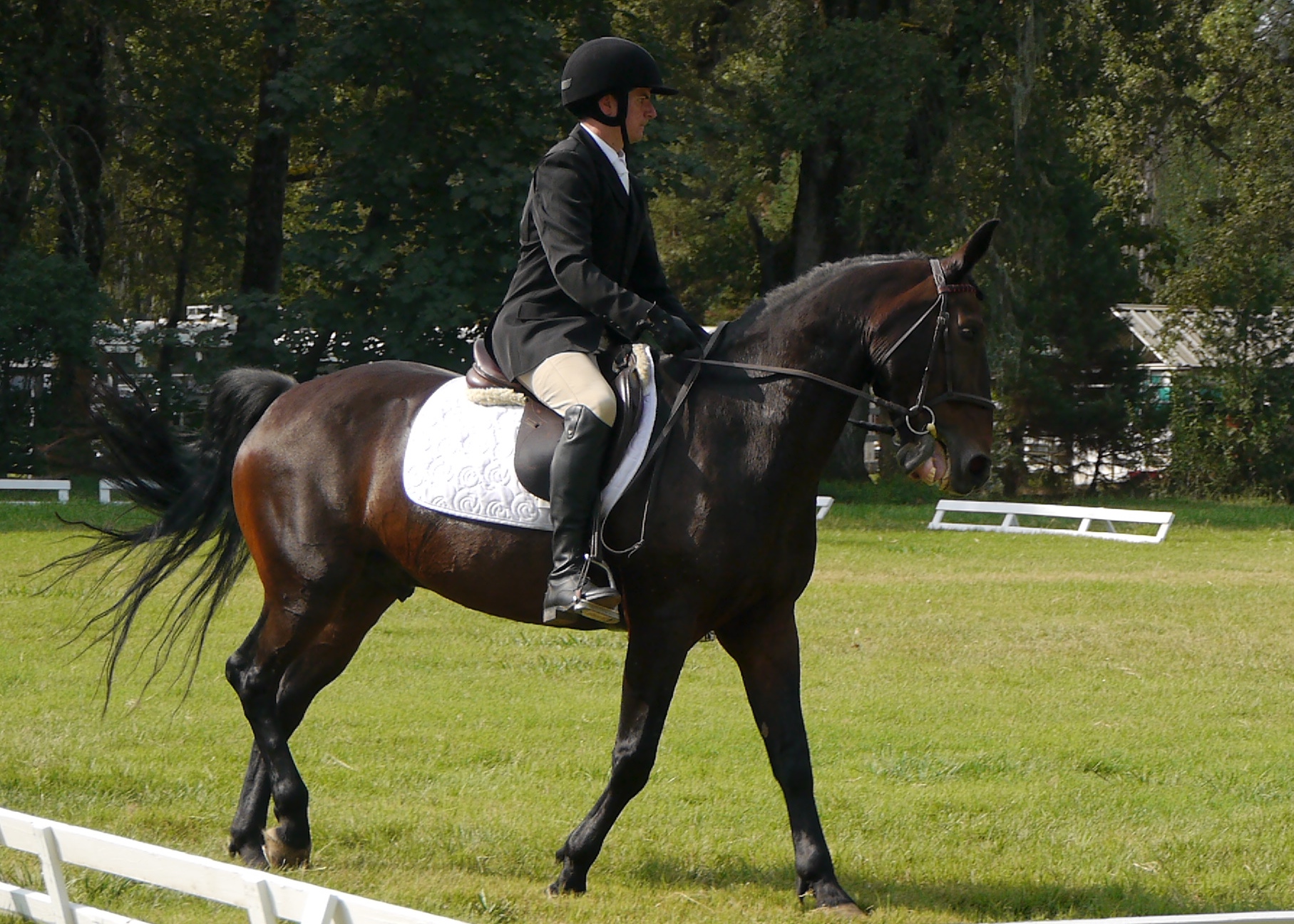 Though the judge didn’t call me on it, I was pretty late to getting him as collected as I could coming back to medium walk, and that translated into a bit of a rough return to trot and not much balance on the part of either of us. 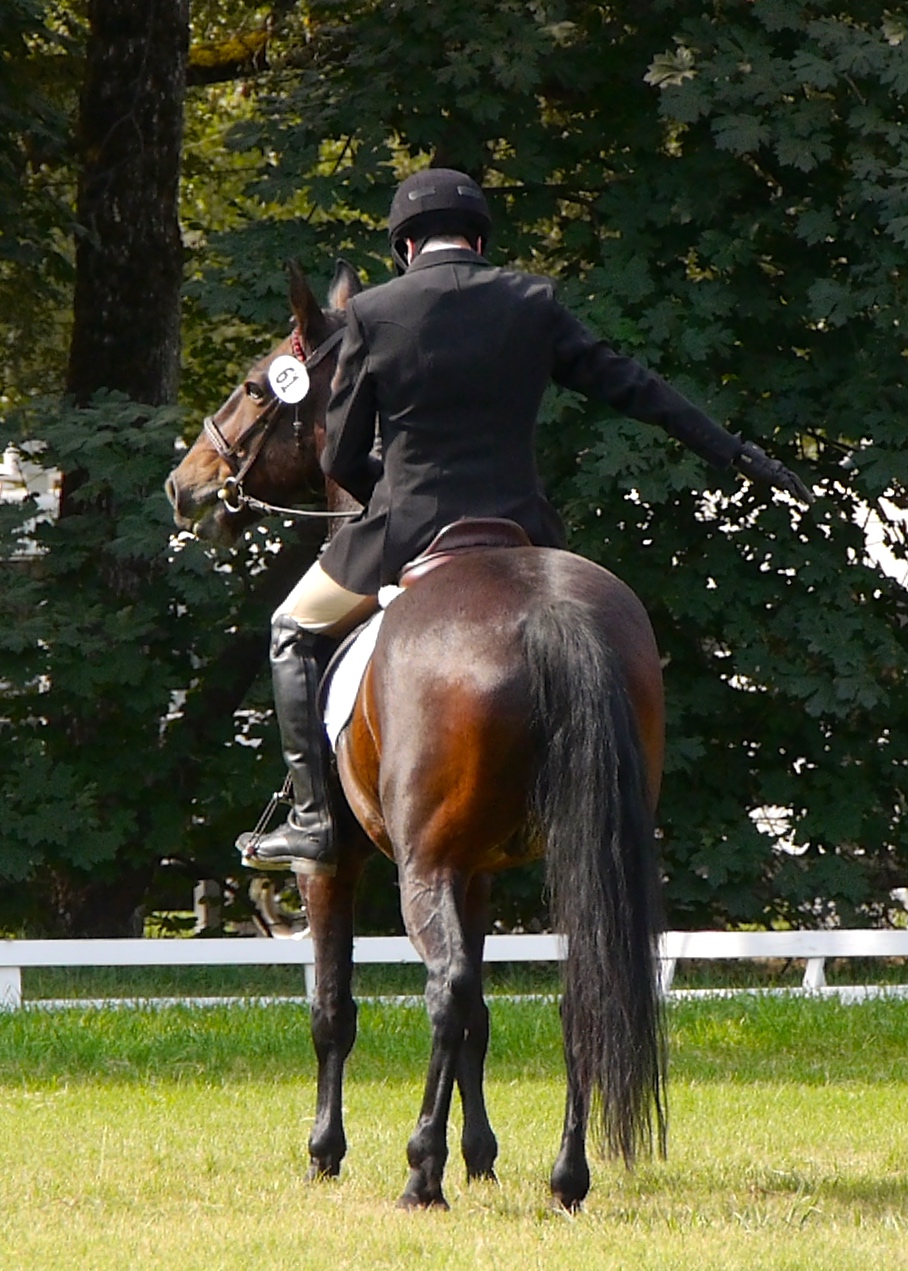 This was disappointing, because halt is actually something he’s usually pretty good at. The second dressage court and his general level of concern about the world certainly didn’t help, though, and I didn’t do a very good job of smoothing the down ward transition. Things to work on!

Tension was, unfortunately, the name of the game. The judge was very generous- but she was generous to everyone, which left us 10/10 after dressage. Since I’d actually been pretty hopeful about dressage after some improvements in the arena at home this was disappointing, but that’s the way it goes.

*Note from Olivia: had he been in my division, his score would have put them in 7th, but that’s the luck of the draw.

With dressage out of the way, we gave the ponies some hay and gave ourselves some lunch while waiting for stadium to start. My wife took a nap in the truck, and I wandered off to watch some of the Training level jumping and keep an eye on how quickly things were going.

I thought they were moving right through the competitors in each division, but I didn’t stay quite long enough to notice that the periods between divisions were less organized and speedy- and so, despite having only 10 riders to go in Training after I left and averaging less than 2 minutes to a rider, they’d not even started Novice yet by the time I’d gotten back, woken up Olivia, and we’d changed and gotten the horses all groomed and tacked up and walked back to the warm up arena. Oops.

Since we had a bunch of unexpected time, I spent most of it just standing or walking around. Eugene and completely recovered from his nervousness of the morning- another good sign that the early-ride-followed-by-break warmup strategy needs to be the plan moving forward. I did some trotting and cantering just to make sure he was listening to me and ready to go, but skipped jumping anything until about 20 minutes before it looked like it was going to be our turn.

When we got around to jumping in the warmup ring, Eugene felt pretty good- he was listening and actually jumping- rather than just hurling himself over as he does sometimes when he’s bored and not respecting the jumps. We weren’t even tapping anything in the first few. My second time over the oxer we did drop a rail, but I chalked that up to me trying to jump it for him and some awkward striding. After hoping off to take pictures of Olivia’s round, I hopped back on, jumped the vertical once just to remind Eugene that this was what we were up to, and then walked around waiting for my number to be called.

The course itself was 11 jumps, and all of them had different standards. There were also some surprisingly tight turns and at least one with a very uncertain line, so the course was a nice test of balance, control, and willingness. Outside of the butterfly jump I didn’t have any concerns about the third, but the first and second were were sometimes a little shakier.

The judge was wasting no time moving people through, and my starting bell rang mere moments after I entered the arena. I took a bit of time to trot near some of the scarier jumps on my loop towards jump 1, then picked up a canter and headed past the starting posts. 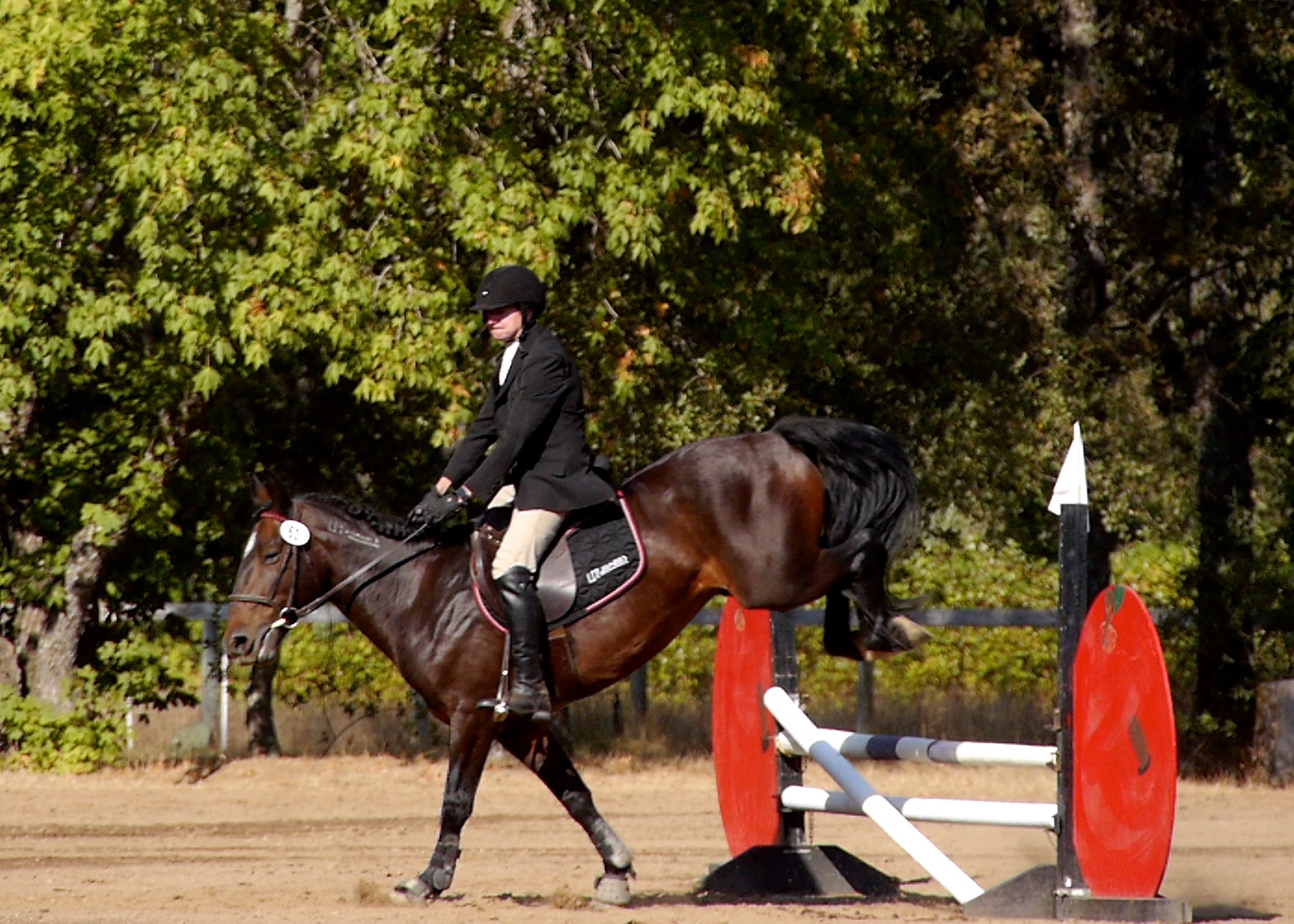 Jump 1 did not bode well for this test. I was actually concentrating on trying to rock him back and get him under himself for the jump, and some part of the striding, my riding, or his attitude or all three resulted in a rail down at the very first fence. I am at least proud that I managed not to immediately turn around and stare at the jump we’d just hit, though – instead we were off to jump 2.

Which, unfortunately, went pretty much the same.

This was not going well. It was time for a change of plan.

One of the challenges with Eugene has been encouraging him to take the longer stride rather than chipping in when we don’t get the striding right- which is pretty much always, since neither of us has the eye for it yet. This is something that I never had to learn with Shasta, because as long as I stayed out of her way, she was going to get the striding right on her own. Eugene doesn’t have that level of experience, and I haven’t developed the skill at it yet, so we’re still a bit of a mess.

Since trying to control things wasn’t working, I decided to get a bit more out of Eugene’s way and let him handle things, just using my leg to encourage him to stay forward and to jump as early as he could- rather more the way I ride cross country, honestly. This has been a mixed bag in the past, since Eugene often takes this to mean that he should be perfectly happy to clip the rails, but today it worked. He had plenty of energy, and he used that to surge forward and up over the jumps. 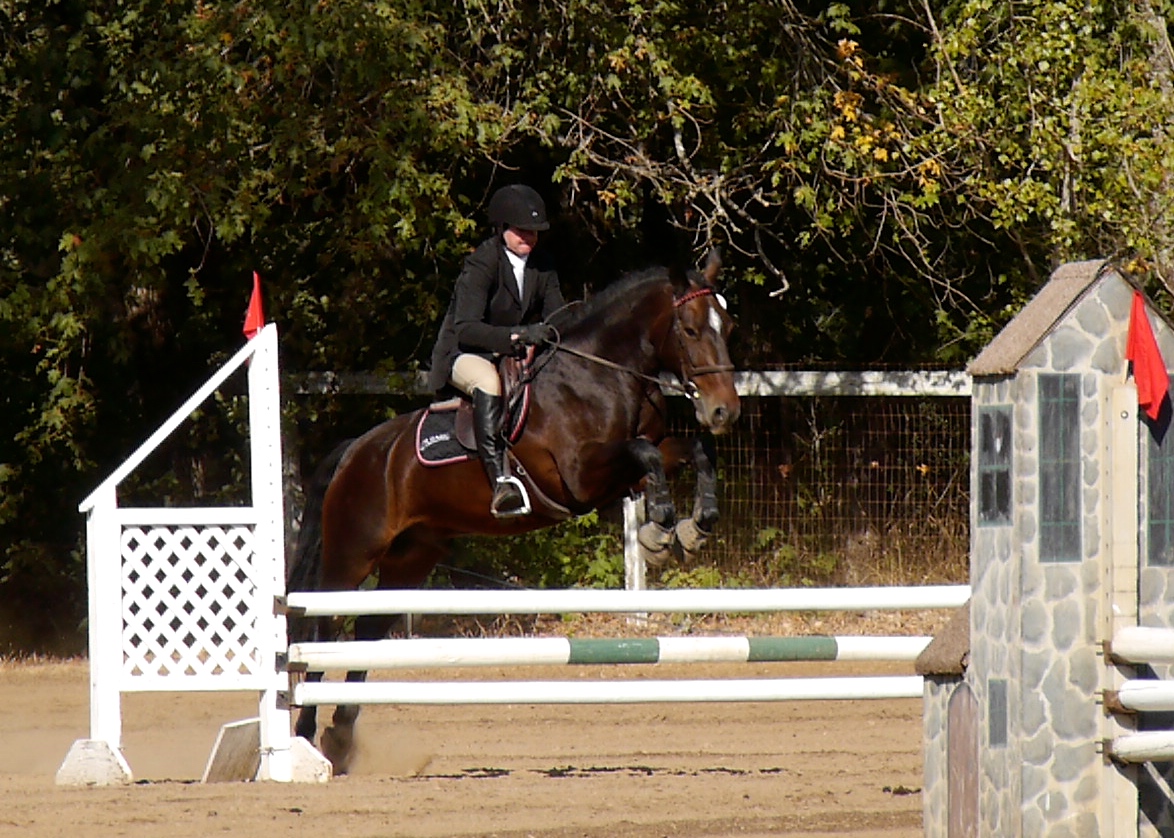 #4. Just a bit left behind after encouraging him forward and then being surprised when he actually took the suggestion.

Of course, this sent control and balance rather out the windows. Our turns – and on a course that had a fair number of them – were not exactly what I’d call pretty. Fortunately, Eugene has ‘willing’ and ‘honest’ in spades, so as long as I’m confident in pointing him at a jump he’s going to take it, even if we come in with weird striding, unbalanced, and at an angle- which we definitely did on some of them. 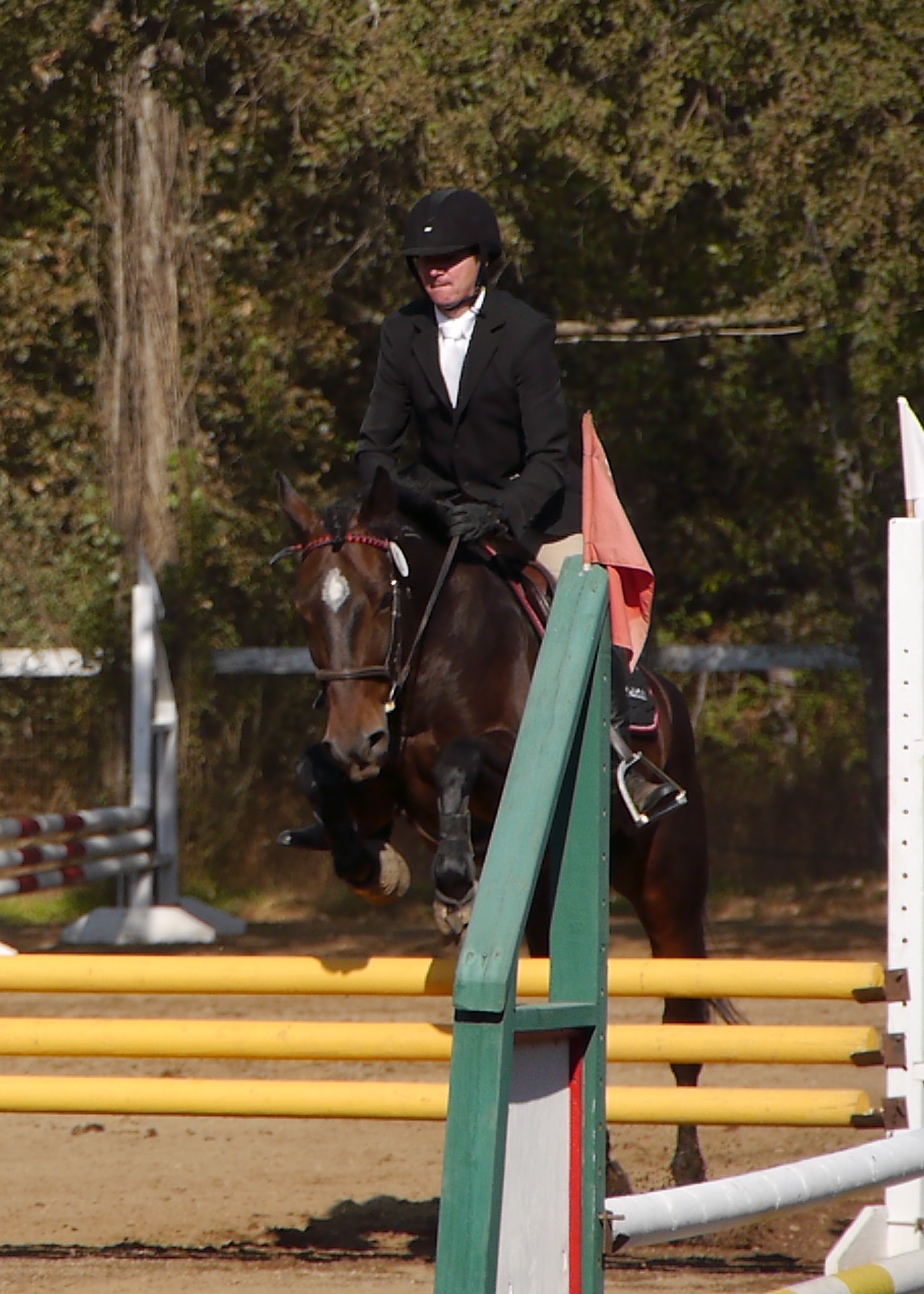 For the rest of the course, we flew around, and Eugene did a great job of getting himself up and over. I think we tapped at least one more, but nothing else fell, and that’s what counts. 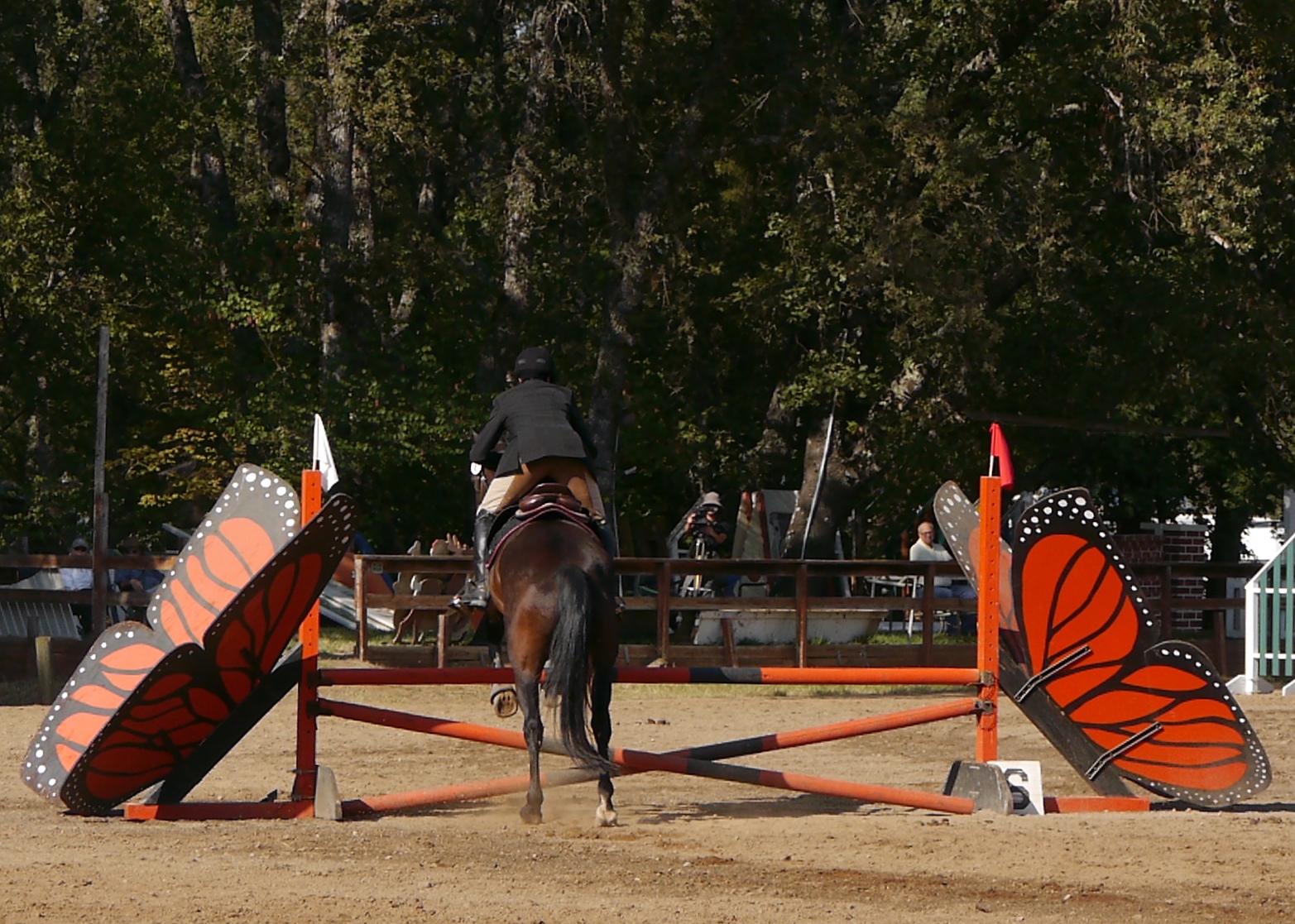 Even the butterfly fence went great. The turn to this was a pretty short 90-degree bend, and as you can see I didn’t really steer us to the center, but he still managed to straighten out in time for the actual jump. 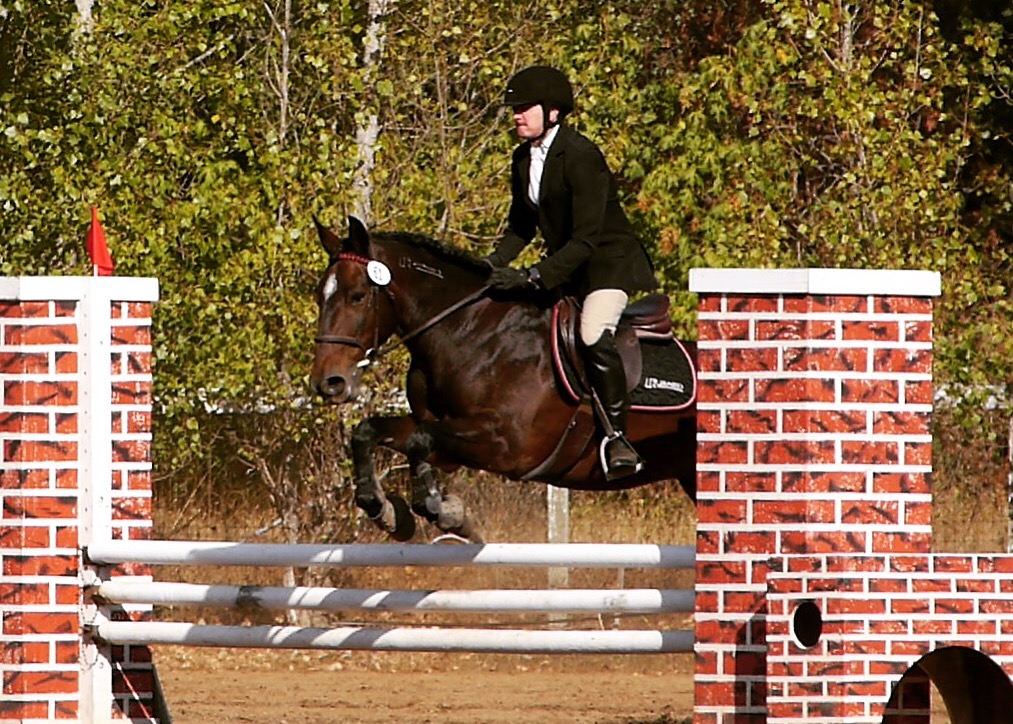 Despite the rough start, we ended up with just the two rails and no time penalties. Two rails was still two too many, but we managed to move up from 10th to 9th due to someone else in my division getting eliminated during stadium. It wasn’t the greatest start to the event, and there are a number of things we need to work on, but we still had a good time and learned a lot. Now we just had to look forward to the Cross Country phase!