My husband and I have been looking forward to returning to Eventful Acres for their final Horse Trials since last year. Apparently everyone else was too because this show was packed. Last year, the senior beginner novice division had 6 people in it. This year, there were 20 (they ended up splitting it) and the whole show had over 100 entries. I really love the facility and the owners are lovely people who truly care about everyone entered.  Despite everything that went wrong this weekend, I was happy to be there for the last show.

We arrived early Friday so that we’d have time to ride and we were given the option to show our horses the jumps in the stadium arena. No jumping was allowed, but we could expose them to the (really very awesomely) creative jumps. We also spent some time just riding and working on the usual dressage standards (bend, straightness, etc). Levi felt pretty good and was settled in for the night with Nilla’s Back on Track sheet.

My dressage time wasn’t till 9:03, but I had to braid Eugene before so we were up at the buttcrack of dawn and I was on around 8:20 to get Levi warmed up. Warm up was in the cross country field and they had three dressage rings going so there were a lot of horses in that XC field. Levi thought maybe we should do more fun things like run and jump instead of circle and trot and bend and walk like a proper dressage horse. Over time, I got him pretty settled and he was listening to me. Then we had to leave that field for a new field with the dressage courts. Our court was turf, which I was initially concerned about because this horse trips on a flat arena, but he did manage to stay upright. And that’s probably the best thing I can say about this test: we stayed upright.

Once we got over to the new field, Levi lost any semblance of chill that he’d had during warm up. He did not want to do dressage and didn’t really care what I had to say about that. 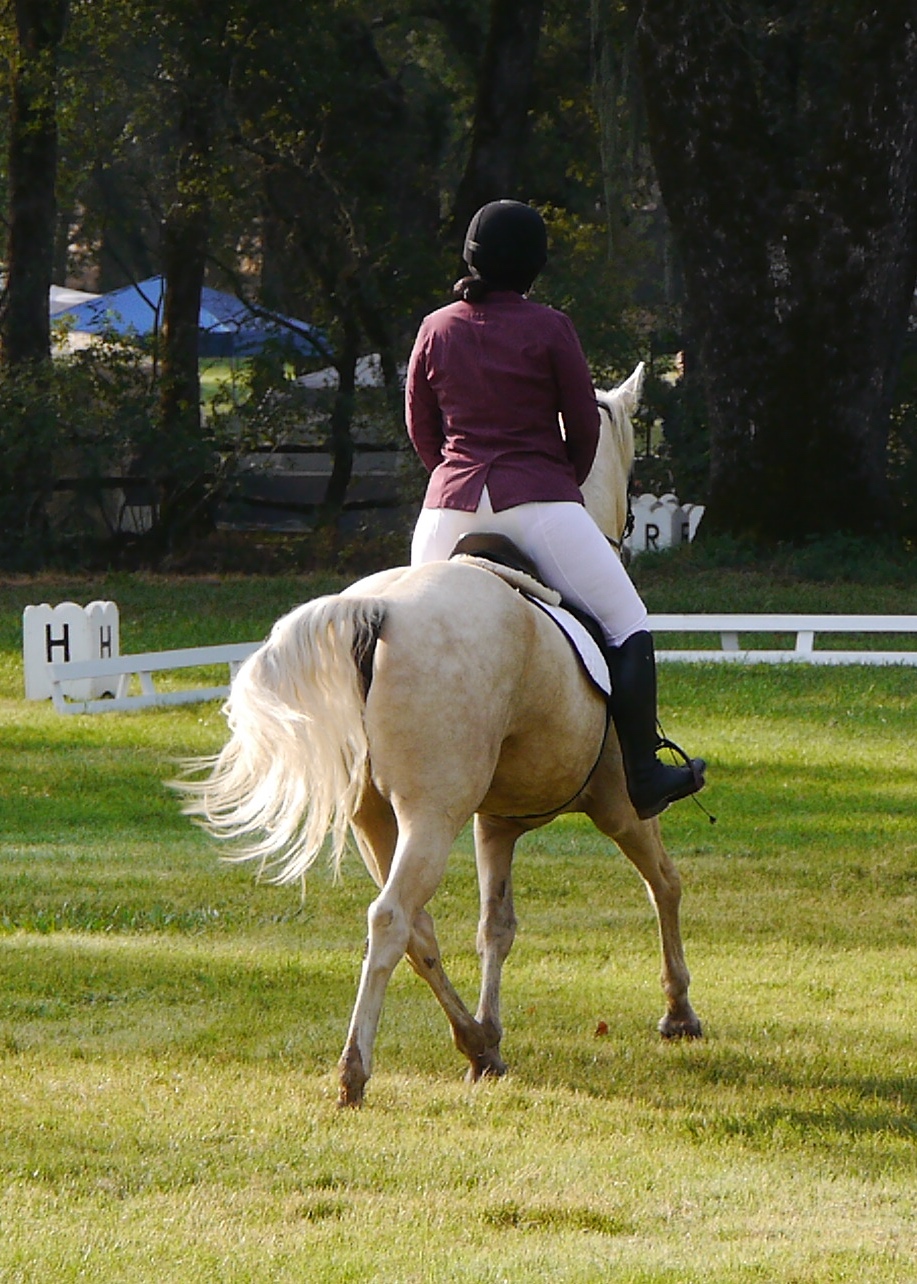 I guess it’s not too bad. He’s stepping under behind. 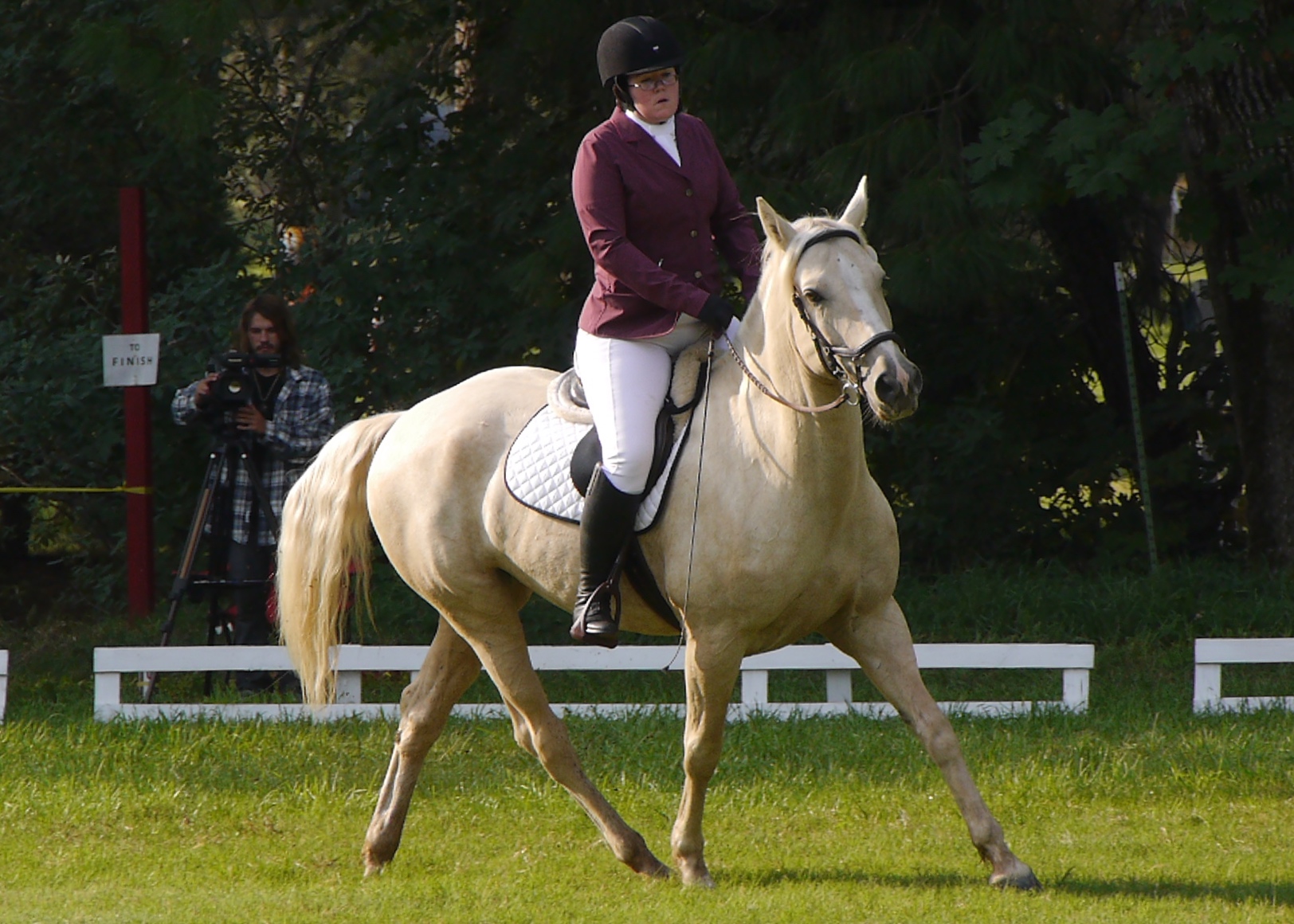 Pretty sure I was thinking:”I’m going to murder you” 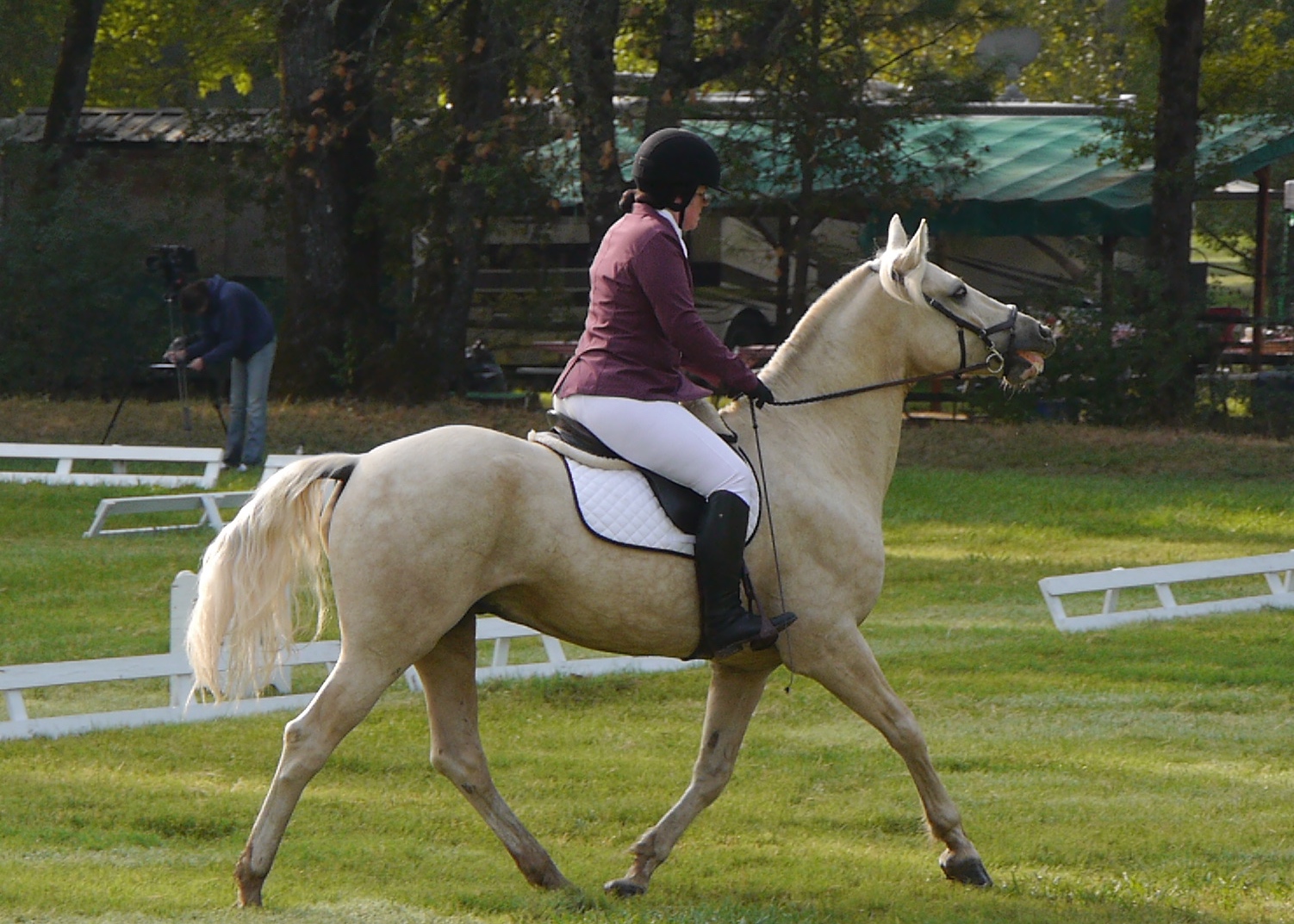 Levi: “Eugene is in that direction, let’s scream for him”

“Broke to canter” is technically true, but it doesn’t tell the whole story. When he broke to canter, I lightly asked him to come back to trot and he threw an actual temper tantrum. He slammed to a stop, squealed, and thought about rearing. He didn’t; he just sucked back like it was a thought and I quickly pushed him forward. Sadly, my husband missed a photo of this moment, but all you need to do is picture a toddler screaming and hurling his toys onto the floor except the toddler is a 1200 lb asshole of a horse and that’s just what it looked like.  My husband, positioned on a hill well past F, heard him squeal from all the way over there. As bad as this was, it’s actually going to get worse. 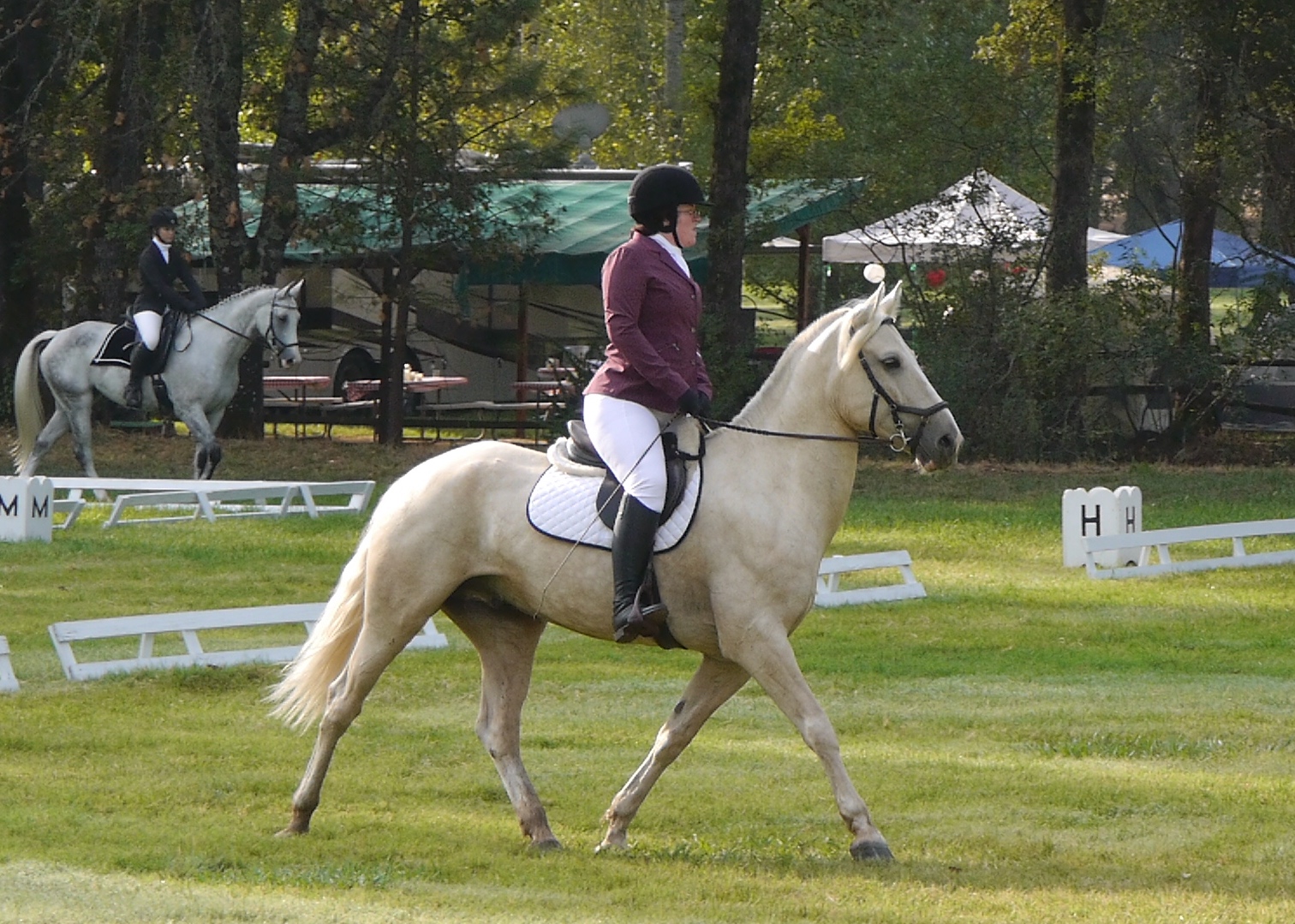 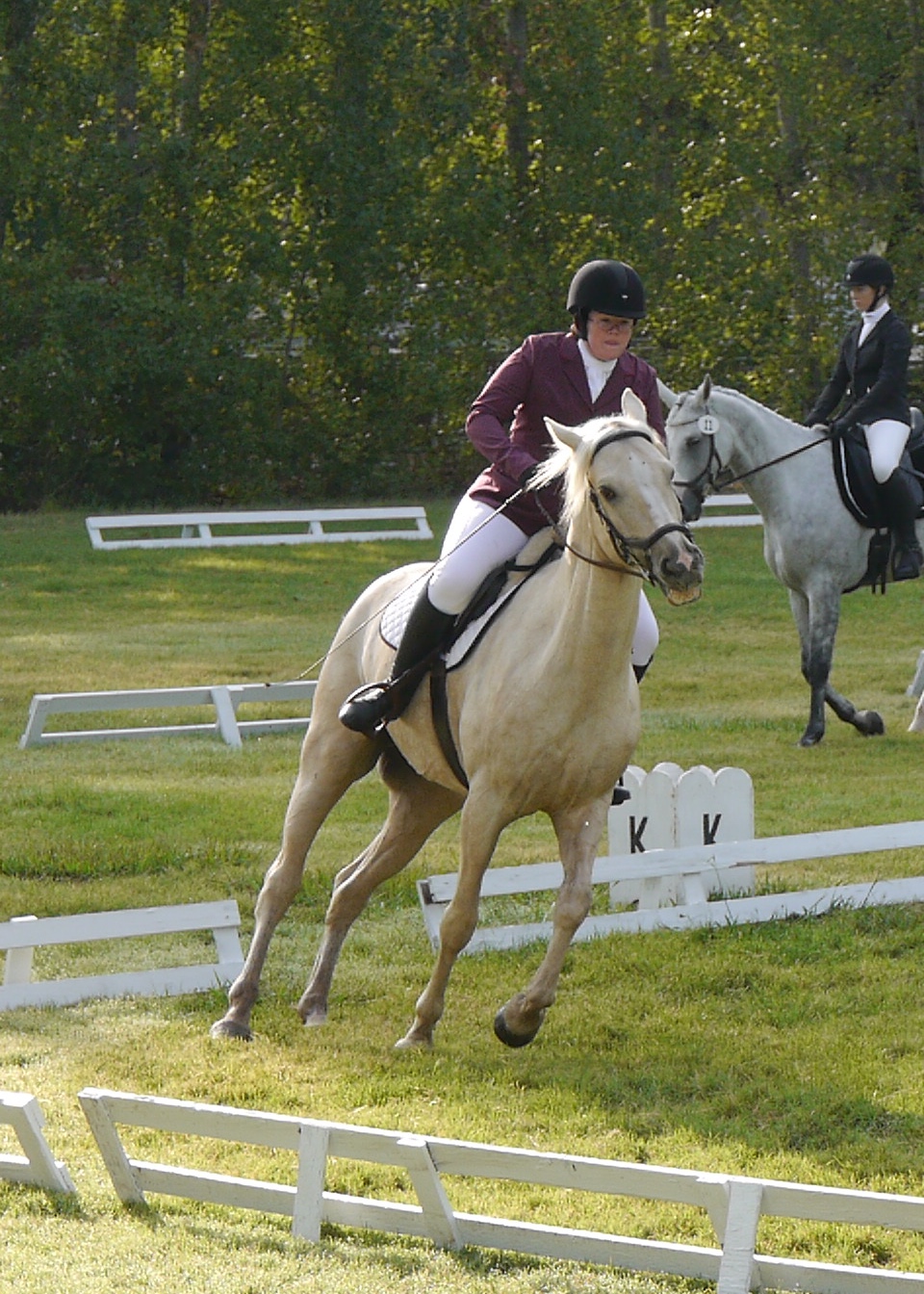 I told you it got worse 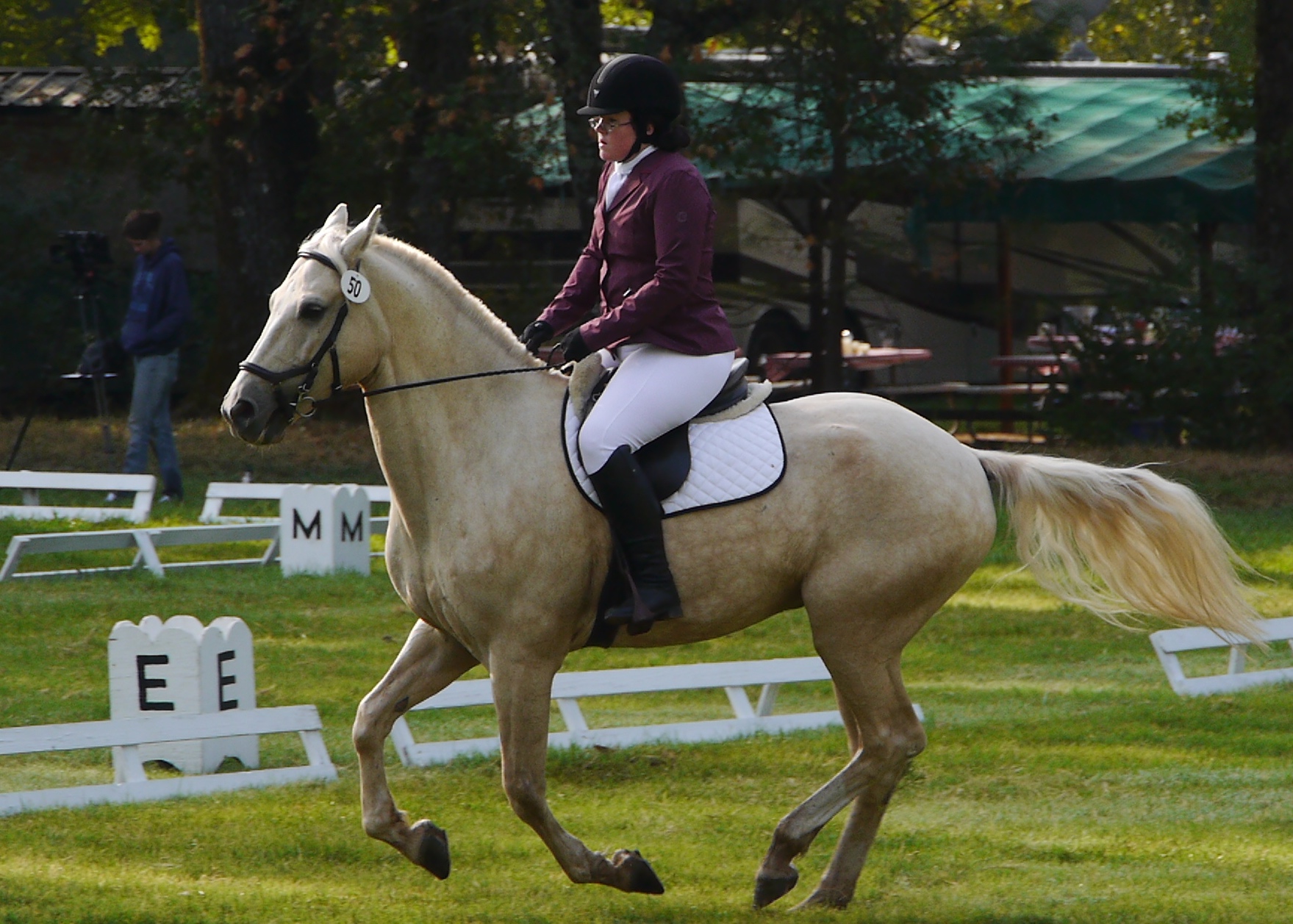 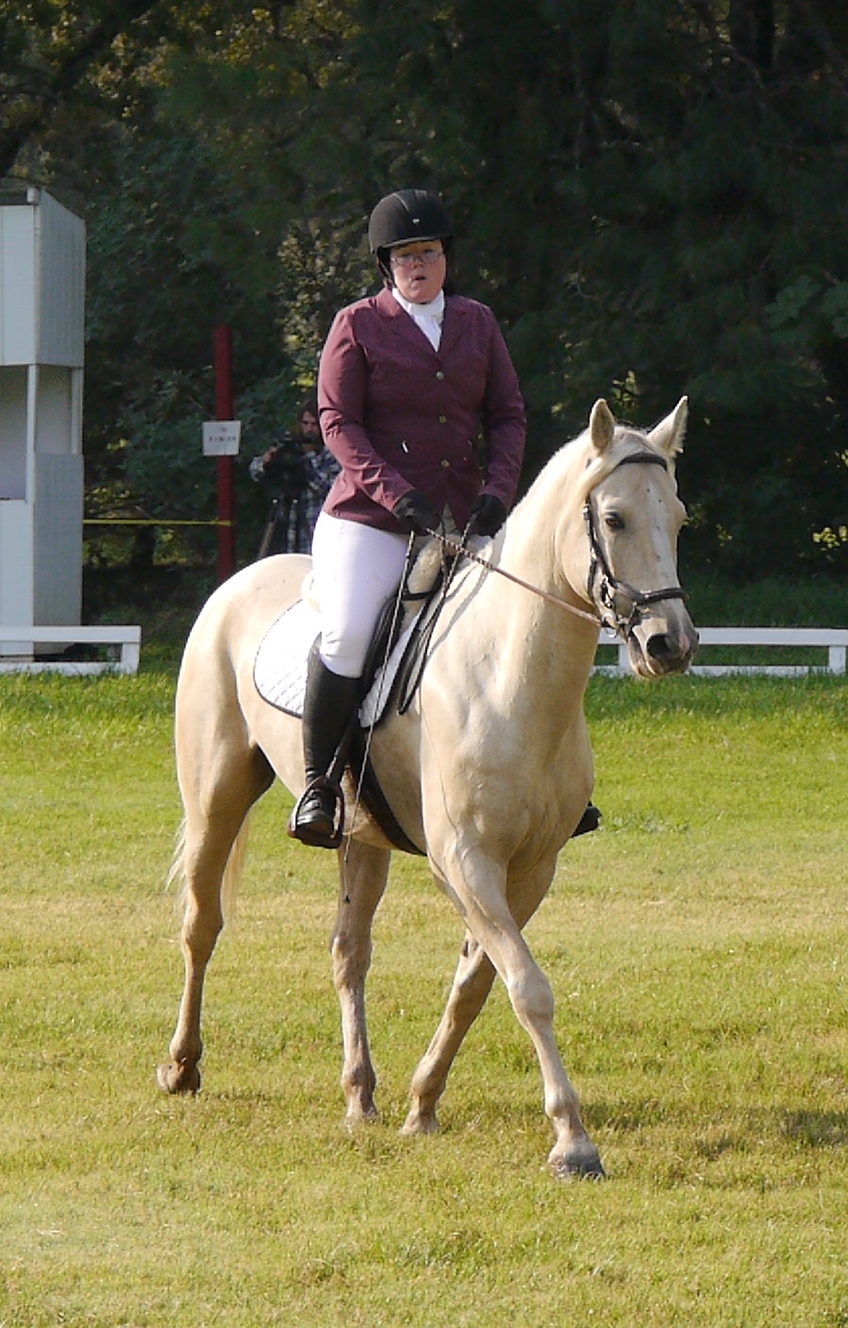 9. Between F and A Working canter right lead
Judge’s Comments: “could be st8er”
Score: 6.0 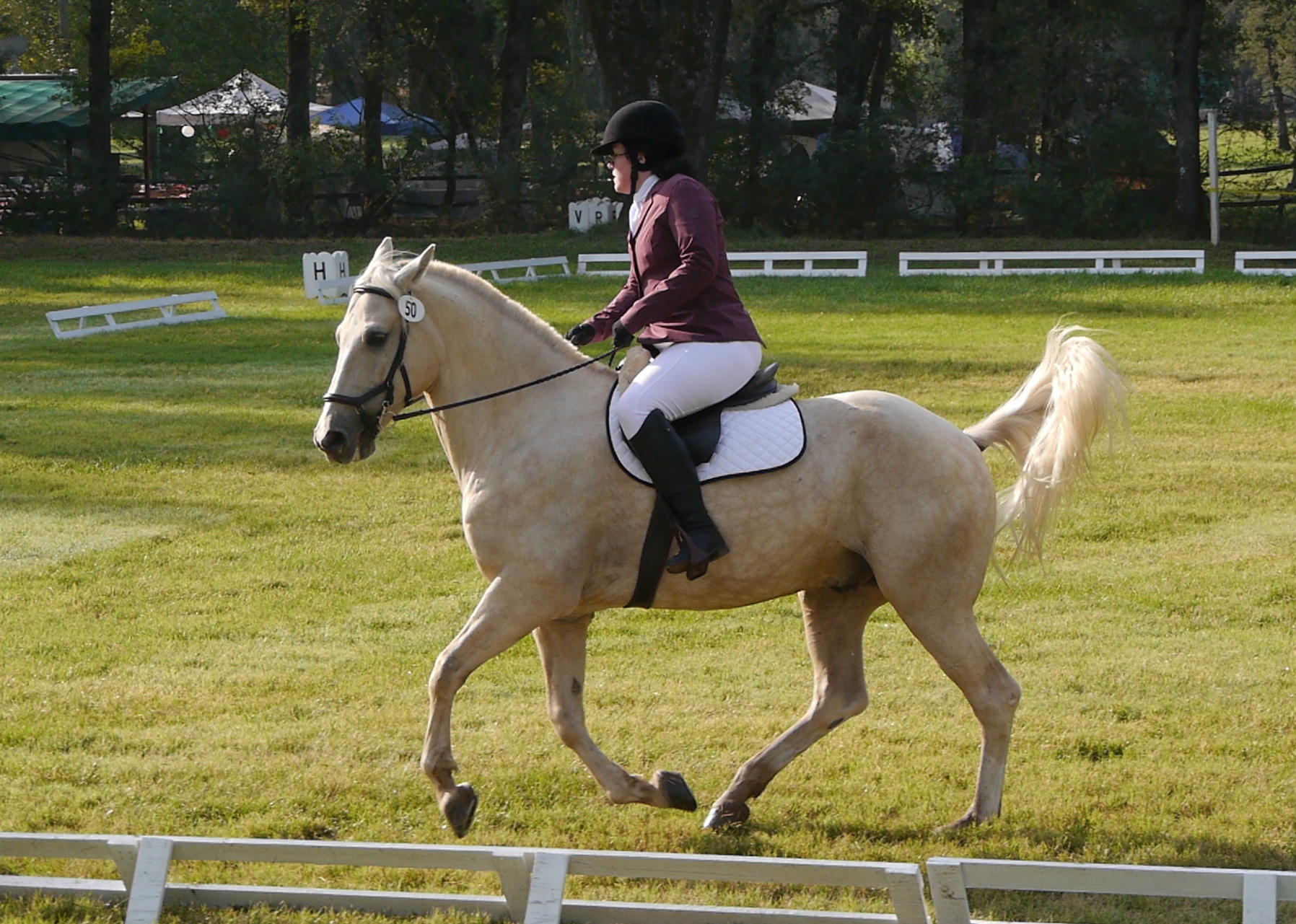 Not sure if this is supposed to be straighter or steadier, but Mr. tail sass says neither was happening 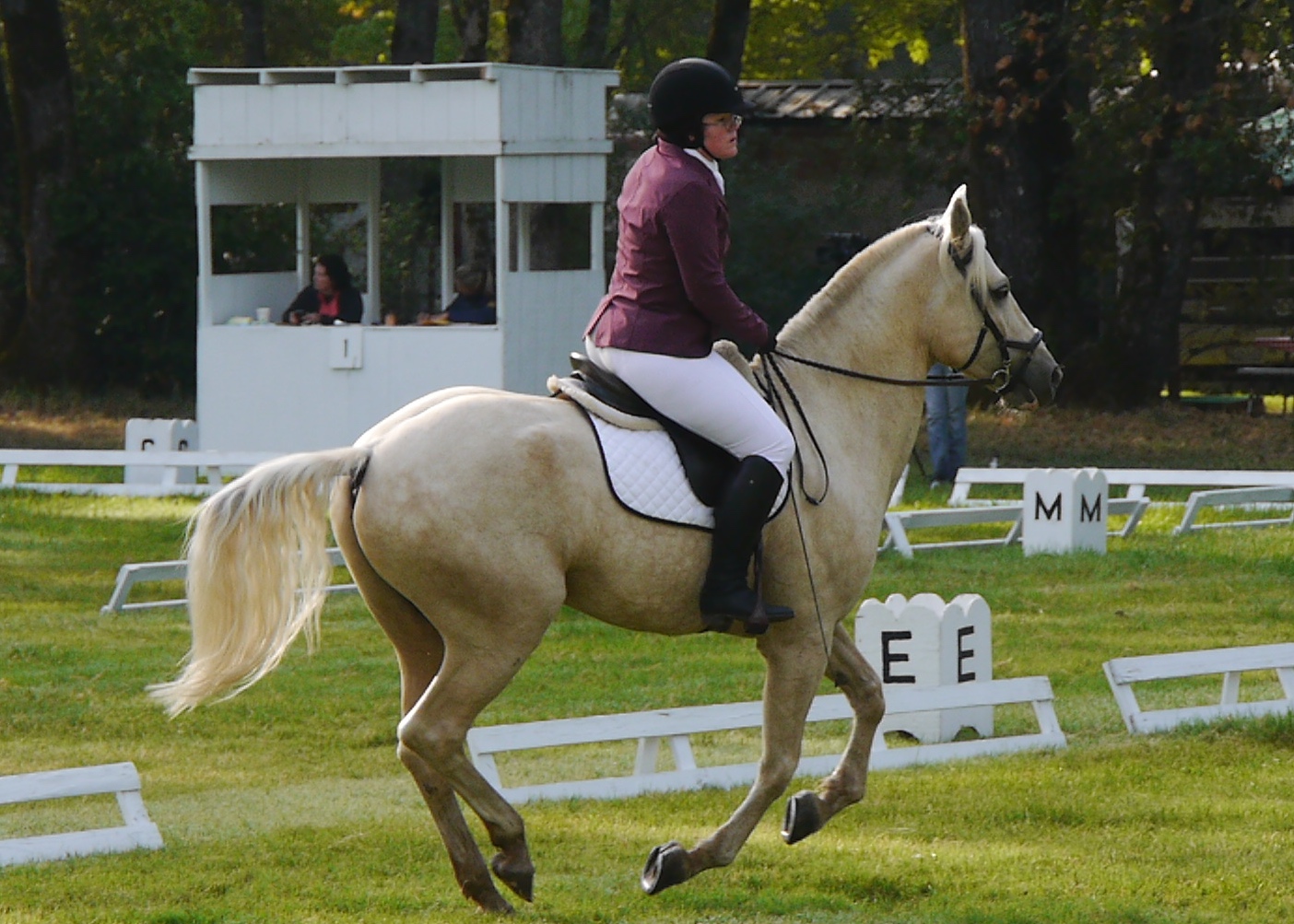 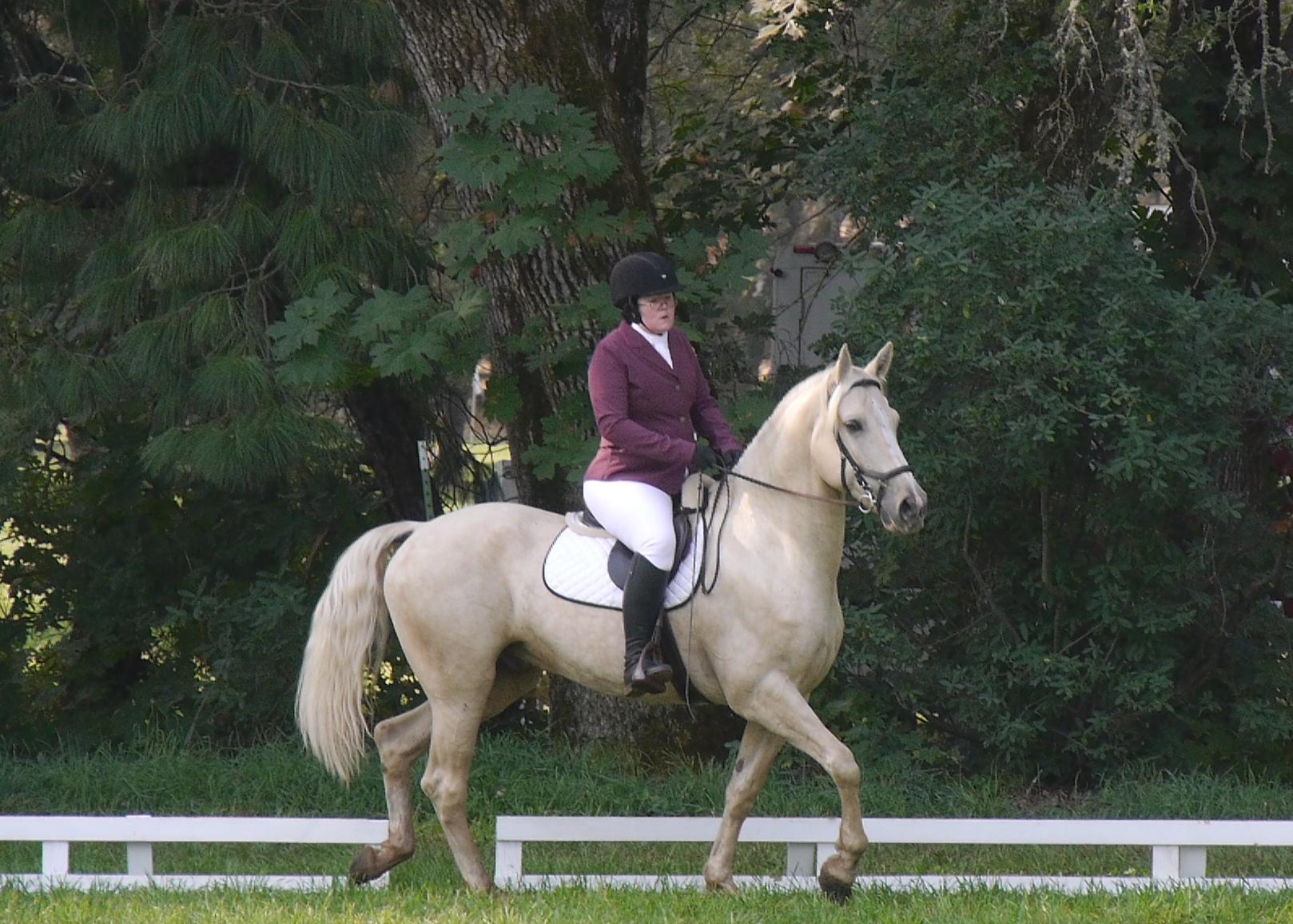 I think he turned into a TWH here 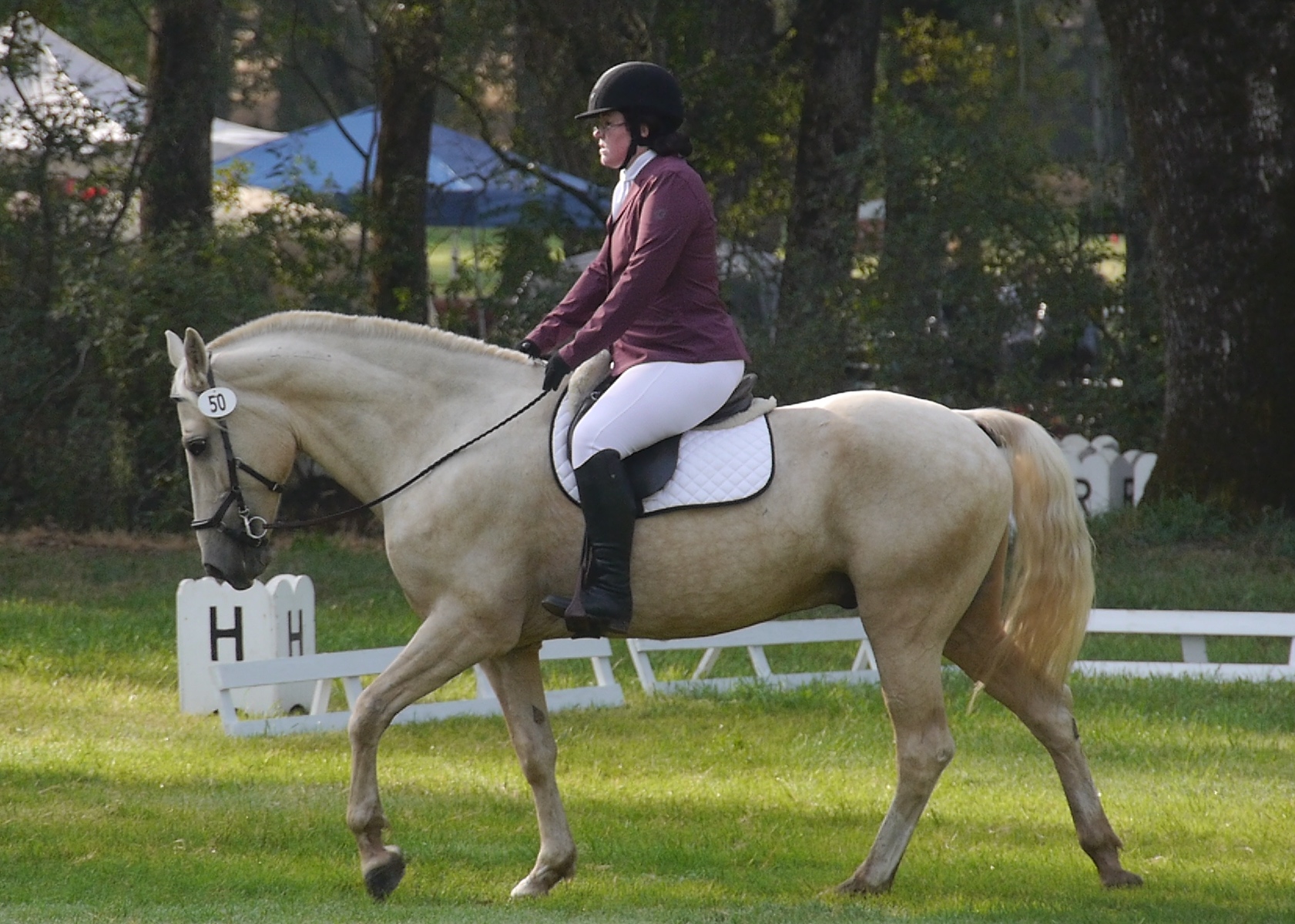 Sadly, free walk is normally something Levi’s good at, but he was way too distracted 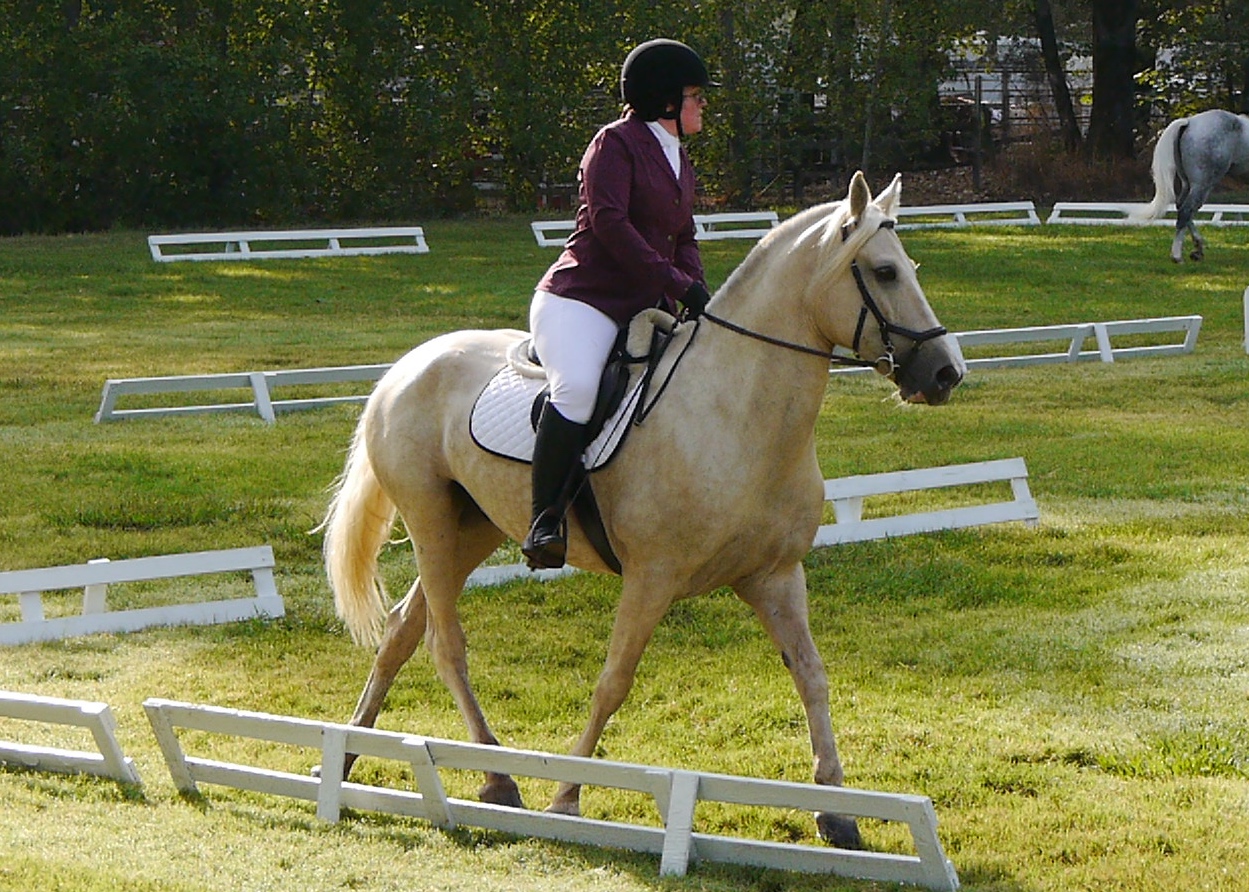 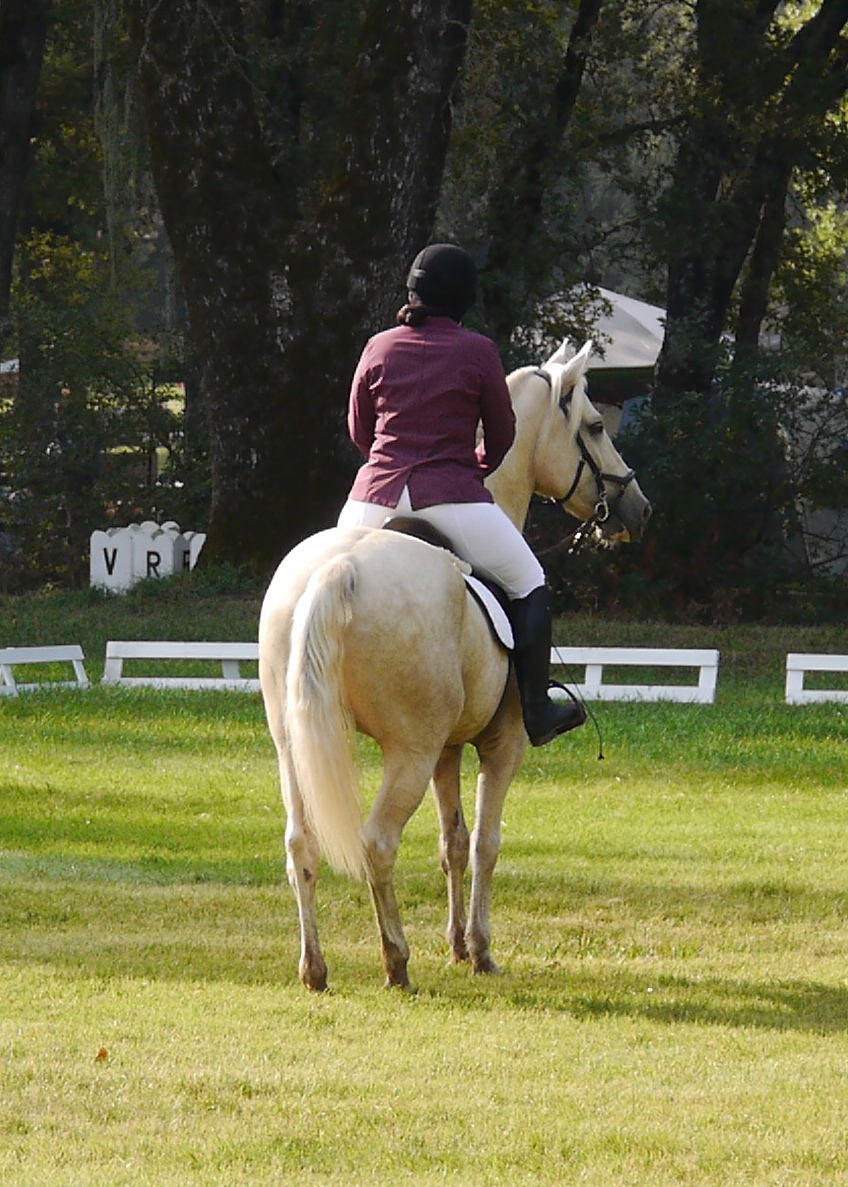 I was surprised he actually halted given how bad he was being and we don’t normally do well at halt. He was screaming for Eugene the whole way down the center line though.

The judge was really generous. We deserved a lot worse. She was equally generous though and we ended up 9/10 for our division.

Stadium started at 1:30 with training and there were 40 training + novice entrants so I thought I’d have until 3:00 or so before I needed to get ready. I tried to take a nap in the truck while my husband went to watch training, but he came back at 1:50 to say they’d gone through all of training already and were moving really quickly. I thought that seemed impossible and didn’t want to go over yet, but he really wanted to go. 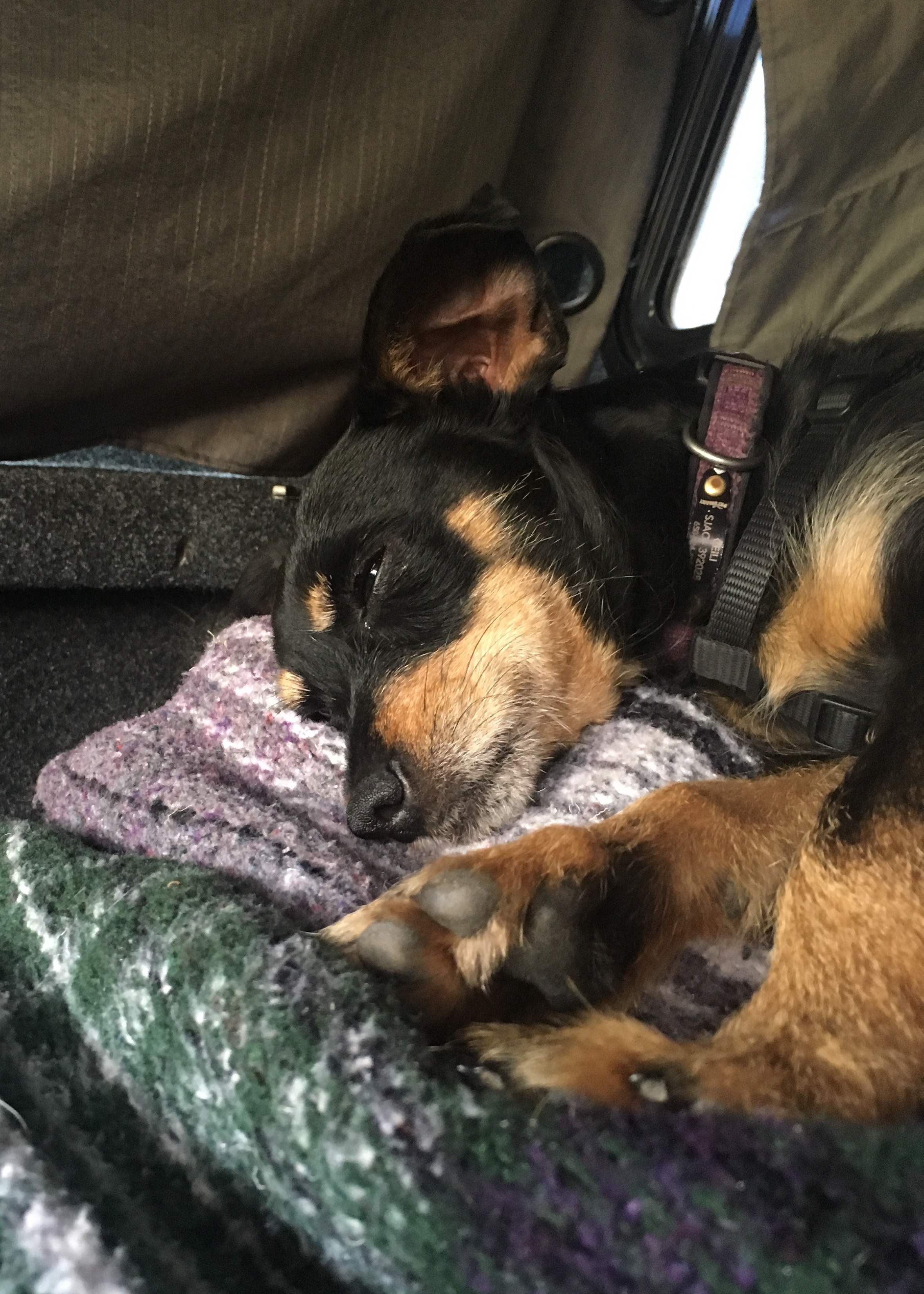 Ceili was down with my nap plan

So we got changed and tacked up and arrived at the arena in time for the to just finish setting the course for Novice. It turns out they had finished Senior training (which was just 7 people) when he came over. I was number 50 and Novice started with 18. We were stupid early.

We ended up just standing around outside of the warm up arena waiting and watching people do their courses. Finally novice was about to end so I hopped on, but then the were watering the warm up so we went back outside the arena for a bit. My husband went back to the trailer to get something he’d forgot and I parked Levi with some other horses so he wouldn’t lose his mind. Someone fell off and cries of “loose horse” prompted about half of us to do emergency dismounts. It was funny because a trainer looked over and was like, “I can tell who was in pony club.” I wasn’t in pony club, but that was a taught habit at my barn growing up and it’s instinctual now. Loose horse = emergency dismount.

I was concerned about stadium before we even got to the event. Levi still thinks stopping at new jumps the first time is a good plan and Eventful Acres goes all out in decorating their jumps. Of course, in eventing, you don’t get a practice round. I had even joked with the videographers that I didn’t want to sign up for videos because I’d probably be eliminated at Stadium.

Once they finally started BN and we actually got to warm up, the warm up arena was complete chaos. BN started with #41 and I saw #68 in there. Someone eventually got on the loud speaker and told people to get out if they weren’t #52 or below. Levi, was sort of losing his mind though. He decided that trotting was not a thing he could do. There was only walk and canter. The ring steward came over and asked me if he was lame. I was like no, he’s just an idiot. She said a vet who was watching thought he was lame and did I want to withdraw? No I did not, because he’s not lame. I was then asked if he had a bad hock and I was like, yes, he does. And it is possible he tweaked that hock while I was screaming and spinning like a nut in his stall during Eugene’s warm up and dressage. But he didn’t feel off, just off in the head.

Unfortunately, his crazy behavior only lends itself to anyone watching thinking he’s lame. He’s squirrelly, bucks on landing, refuses new jumps, and over jumps everything. This isn’t new behavior at all. I’m used to it, but everyone else there wasn’t.

He was squirrelly to #1 and got too close, but he jumped it on the first try. 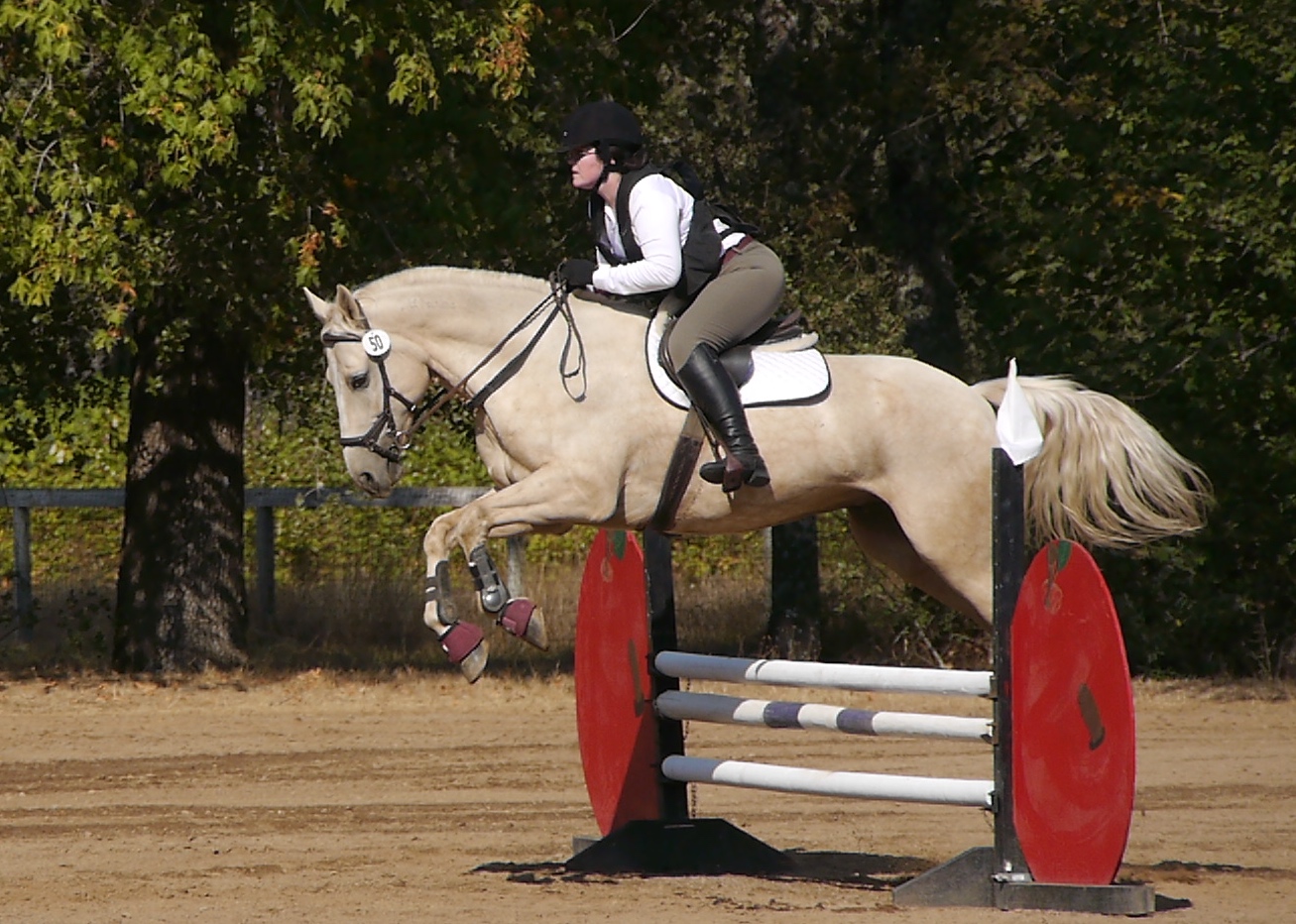 #2 to #3 was a line that walked in 4 strides. He took #2, landed bucking, and then was shocked to find another jump in front of him when I finally got his attention back on the subject.

He exited stage left, we circled around, and he popped over it without a care. On to #4, which he made extra sure not to touch. 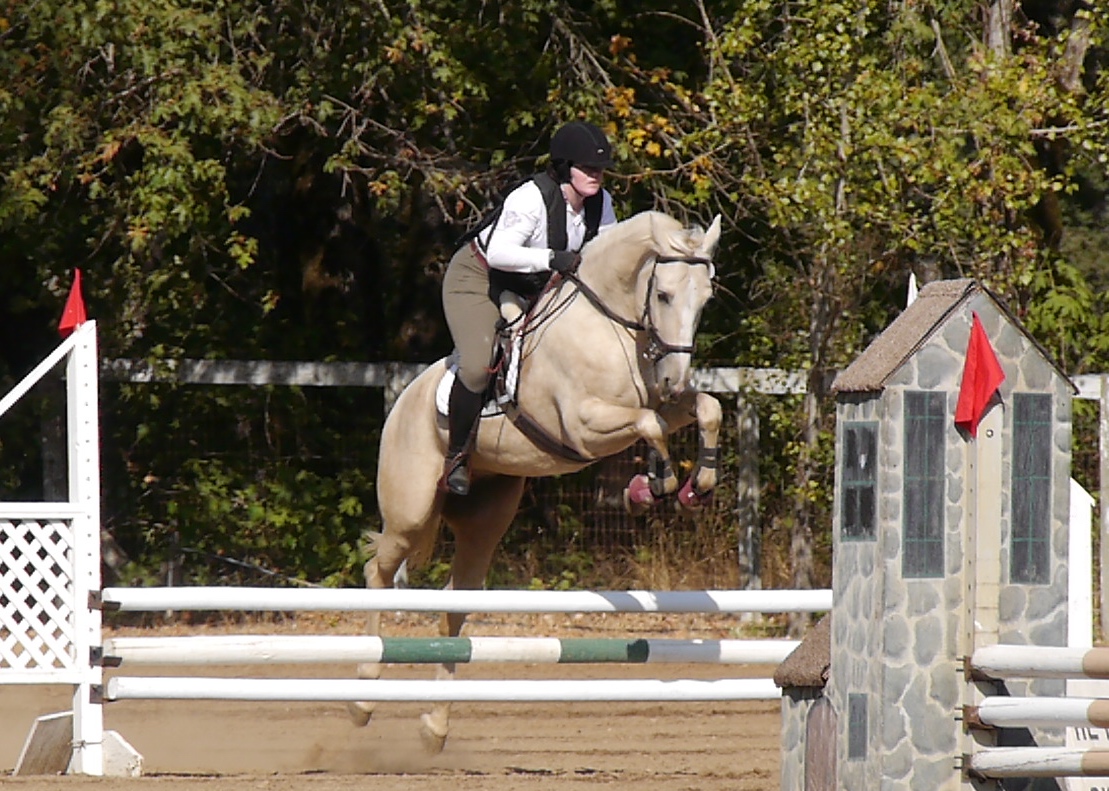 A bending line to #5, which he also jumped. #6 was an elaborately decorated butterfly jump that I was rather worried about, but I kept my leg on and he went right over it. 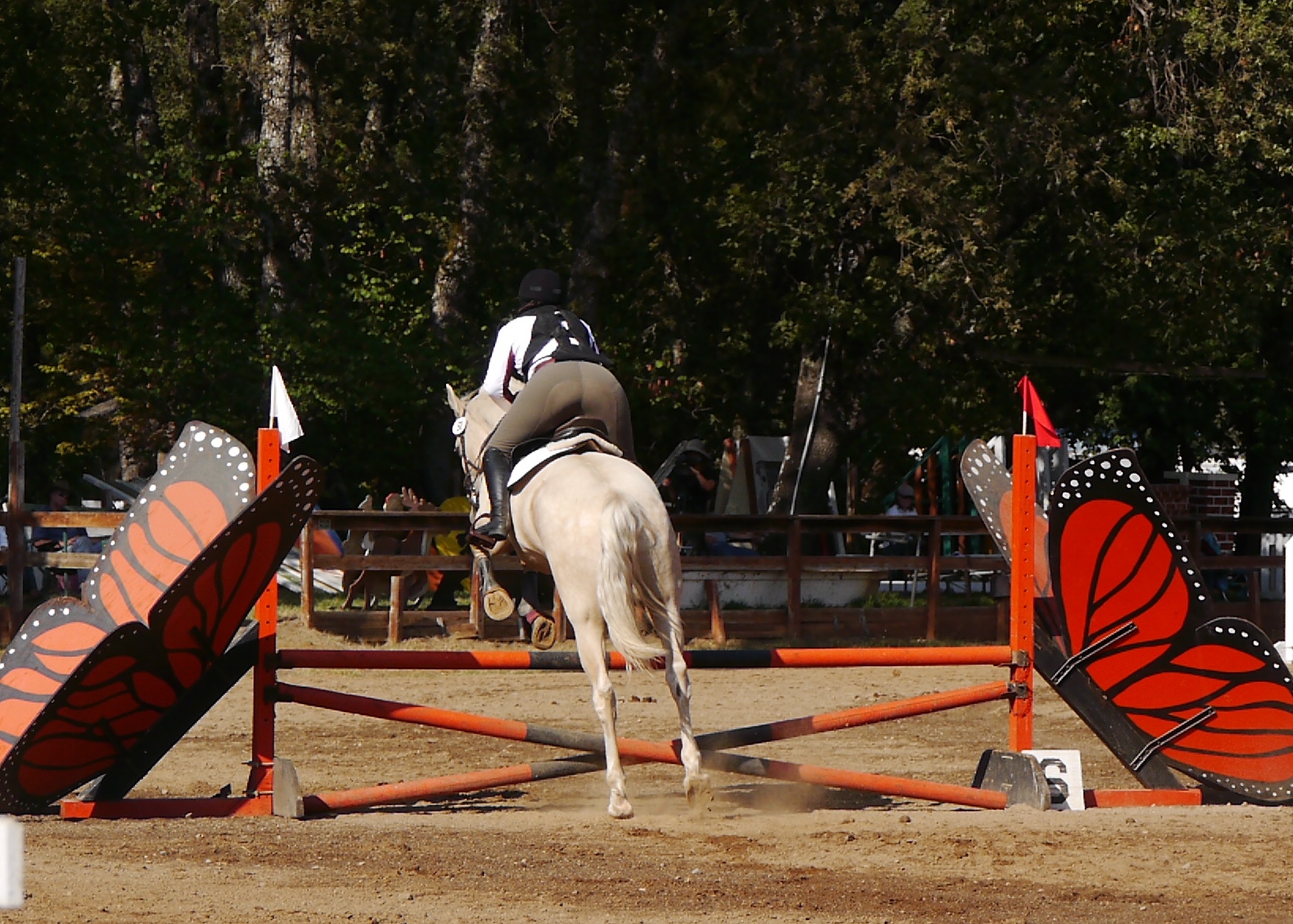 #7 was a two stride combination. Levi took the first one nicely and then once again landing bucking. I couldn’t get him organized quickly enough to get the second jump. Then I got confused. I know in normal stadium jumping you have to redo the first part of a combination but I kinda panicked in the stress of the moment and could only think about how on XC you can just redo the second part if you cleared the first part. So I just did the second part. 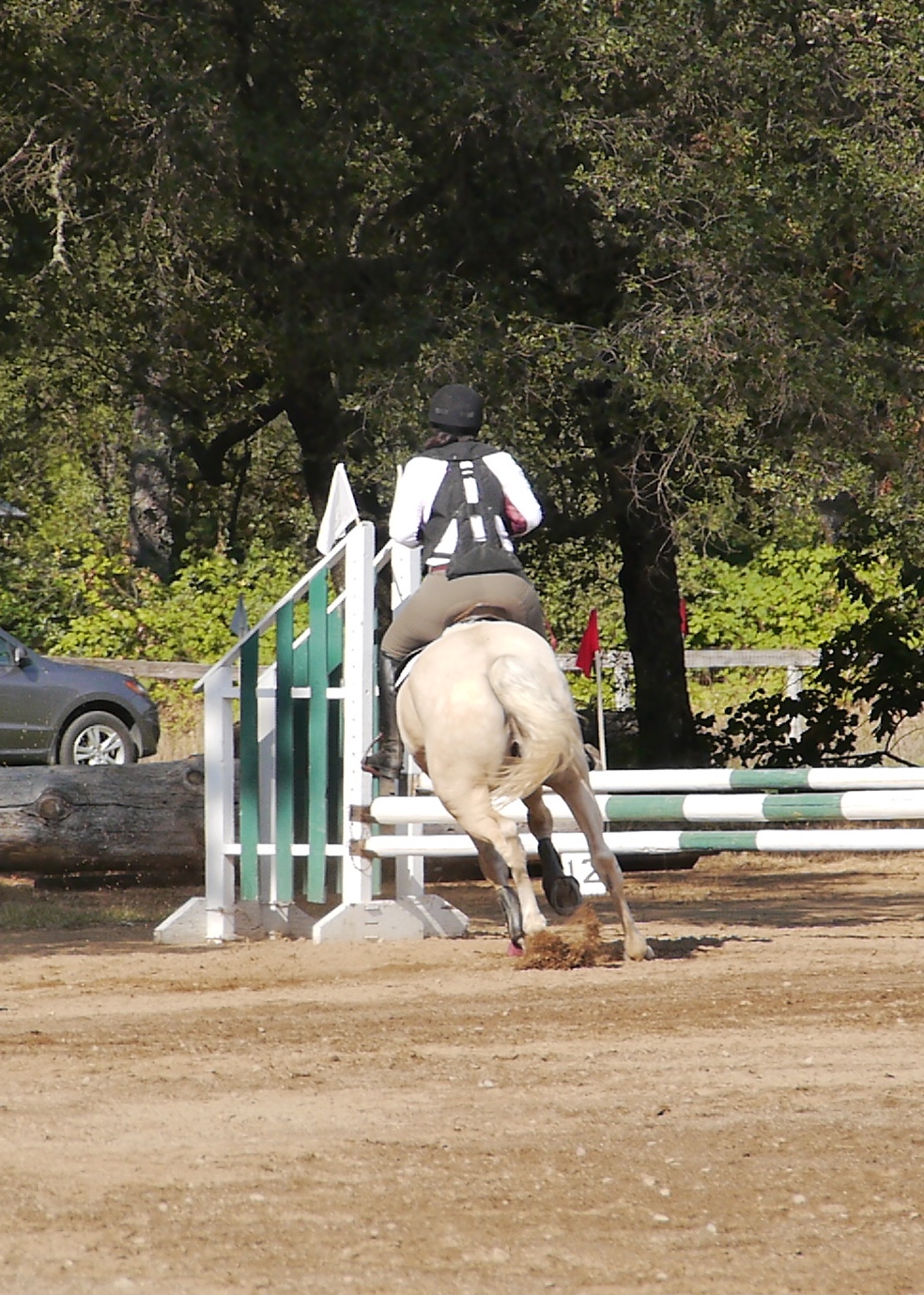 Obviously that was the wrong choice and we got rung out. On leaving, the judge told me I was eliminated for 3 refusals, which was super confusing because I had 2, but I knew the real reason. She also said they normally let people do cross country anyway, but I couldn’t because he was lame. A woman sitting near her said she was a vet and thought Levi looked lame too. I asked if I could trot her for him the next morning and she agreed. The next morning he was -spoiler alert –  totally sound. It turns out if he’s not crazy excited, he can trot and trot soundly. The vet cleared us to compete. She was hanging out by the warm up and saw us when we returned from tacking up and watched us go. She told me he really looked great; both sound and relaxed.

And he was. But one thing he wasn’t, was interested in jumping. As much as he likes to refuse new jumps, that’s just green horse nonsense. This horse normally drags me to the jumps. On Sunday, he was sluggish. He wasn’t even overjumping. Instead, he just cantered up nicely, popped over, and landed cantering without any attitude. Any normal person would be ecstatic. This is how horses are supposed to behave about jumping, right? But I know this horse. And this wasn’t normal. So I scratched him.

I was already eliminated so it’s not like doing cross country was going to prove anything. In fact, I was more interested in proving everyone who thought he was lame wrong. I get why they thought that since he was refusing to trot, but it was still frustrating. I asked for permission to school after the show ended and the owner agreed. I’ll do a separate post about schooling, but let’s just say his normal levels of energy and craziness were back.

I still had a fun weekend even if we did get eliminated. I’m honestly more sad that I wasn’t able to take Nilla than I was about anything that happened with Levi. He’s young and green and as he’s been getting more and more experience, he’s actually getting more confident and has started to decide he knows better than me and would like to just do the fun parts without the listening parts. It’s a phase. We’ll get through it. Anyway, I really wish I could have gone to this last Horse Trials at Eventful Acres with Nilla. I even found that a bunch of the XC jumps I had done with Nilla at adult camp were on the Novice course. We could have flown around that BN course without a problem. A lot of people remembered me and asked about her. Everyone missed the mule. As insanely difficult as the mule is, weekends like this make me miss her even more.

*I delayed posting this until I rode Levi again on Tuesday – just in case -and he’s still not lame. He’s still an asshole, but he’s not lame. He’s already on preventative ulcer supplements, but I may still have him checked and treated if necessary and the Chiro will be out next week.