Saturday was Cross Country with Yves Sauvignon. My group was at 10 and my husband’s at 1:00. Unfortunately my husband suffered from a bad case of either food poisoning or stomach flu Friday night. Oddly, there were only 2 people effected that night so everyone was pretty baffled as to what caused it. One of the other people was supposed to be in my group for XC and another woman in my group decided to join a later group when her horse went nuts over Nilla.

With just 3 people in my group, we had a lot of time to do all the jumps. We started with a little log to warm up and Yves comment was that Nilla looked bored. True. Little logs are not interesting to the mule. She jumped it, but didn’t even do any bucking afterwards. After the little telephone pole, we went over to a bigger log and Nilla was still being good and just hopping over. 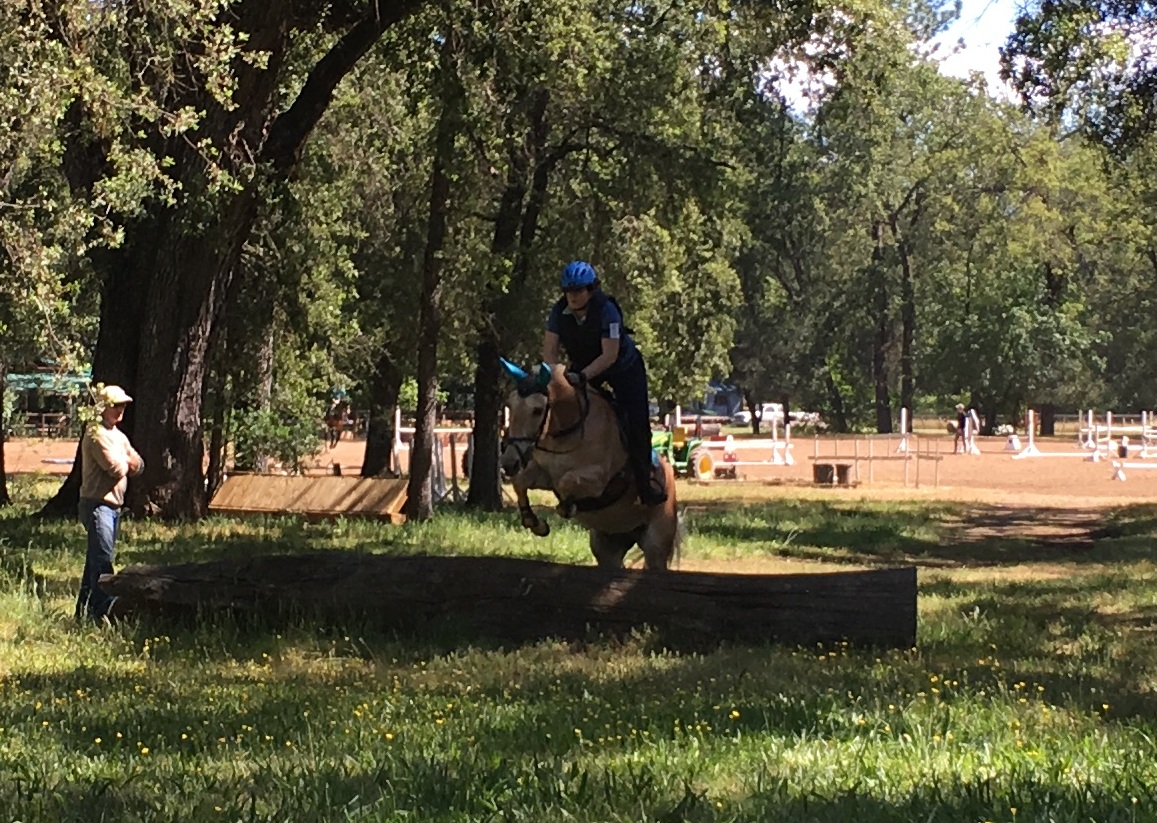 Because my husband was sick, he didn’t get many pictures of us on cross country. I suppose he can be forgiven; he was pretty miserable. Luckily, I have a helmet cam for most of it. There were also a few fellow adult campers taking pictures and I am hoping they’ll share them soon.

After the little logs, we moved on first to a bigger log and then to a large log that had a small log placed in front of it. It wasn’t technically a trekhener, but Yves comment was that it looks like one to the horse because of the way the light hits between the two logs. Thankfully, Nilla doesn’t care about ditches or look-alikes and popped right over. She did start playing after the jumps at this point, which you can see in the video. Because I know she’s going to land bucking, I start riding with my hands too high. It’s a bad habit. 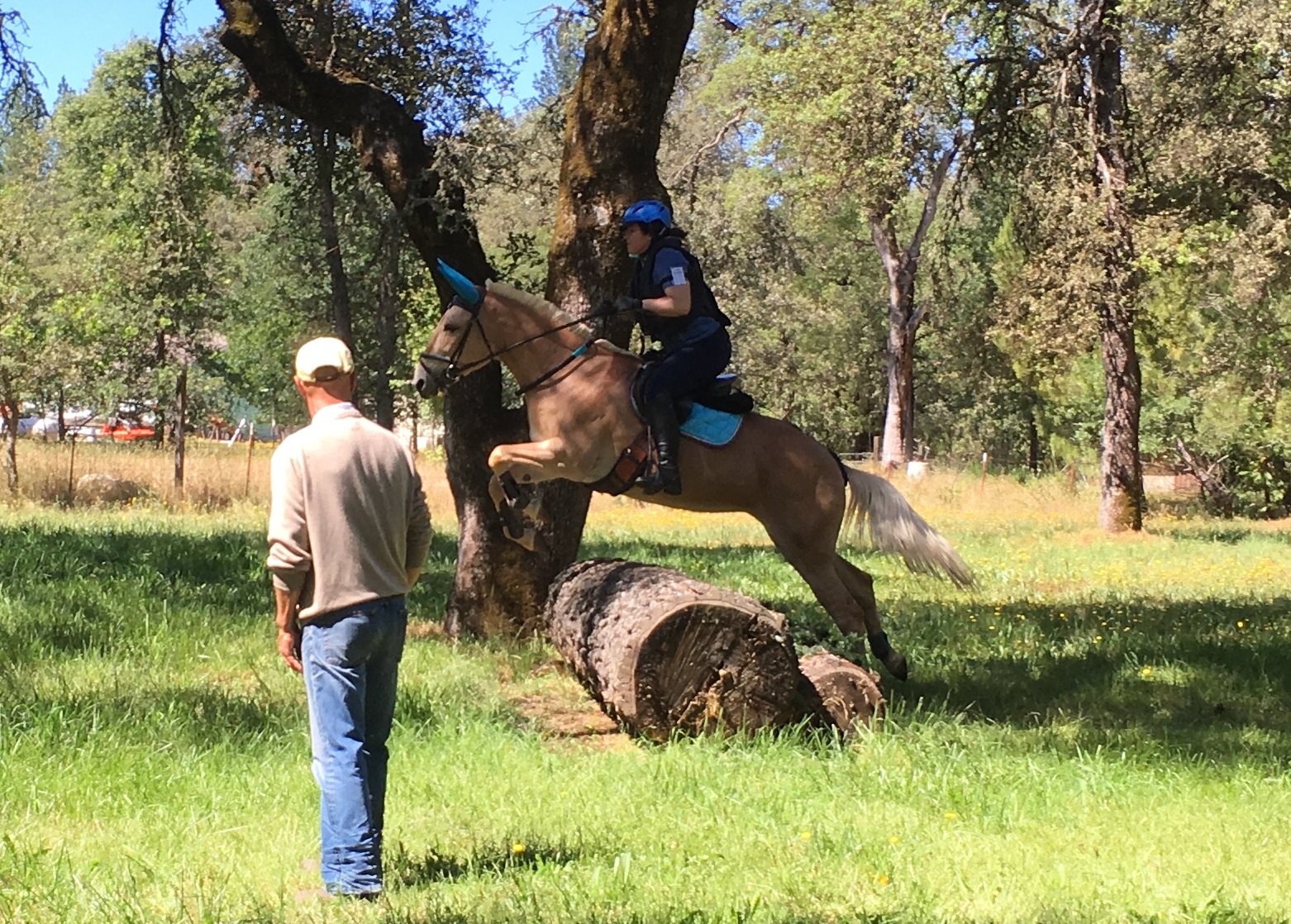 After that we did another double log (above) which I kinda though about opting out of, but I made myself do it anyway. Nilla didn’t really care though she did do her bury to the base and awkwardly hop it move so it wasn’t pretty, but we made it over. If you zoom in, you can see she has a wildflower sticking out of her mouth. Can’t imagine where she got that from. 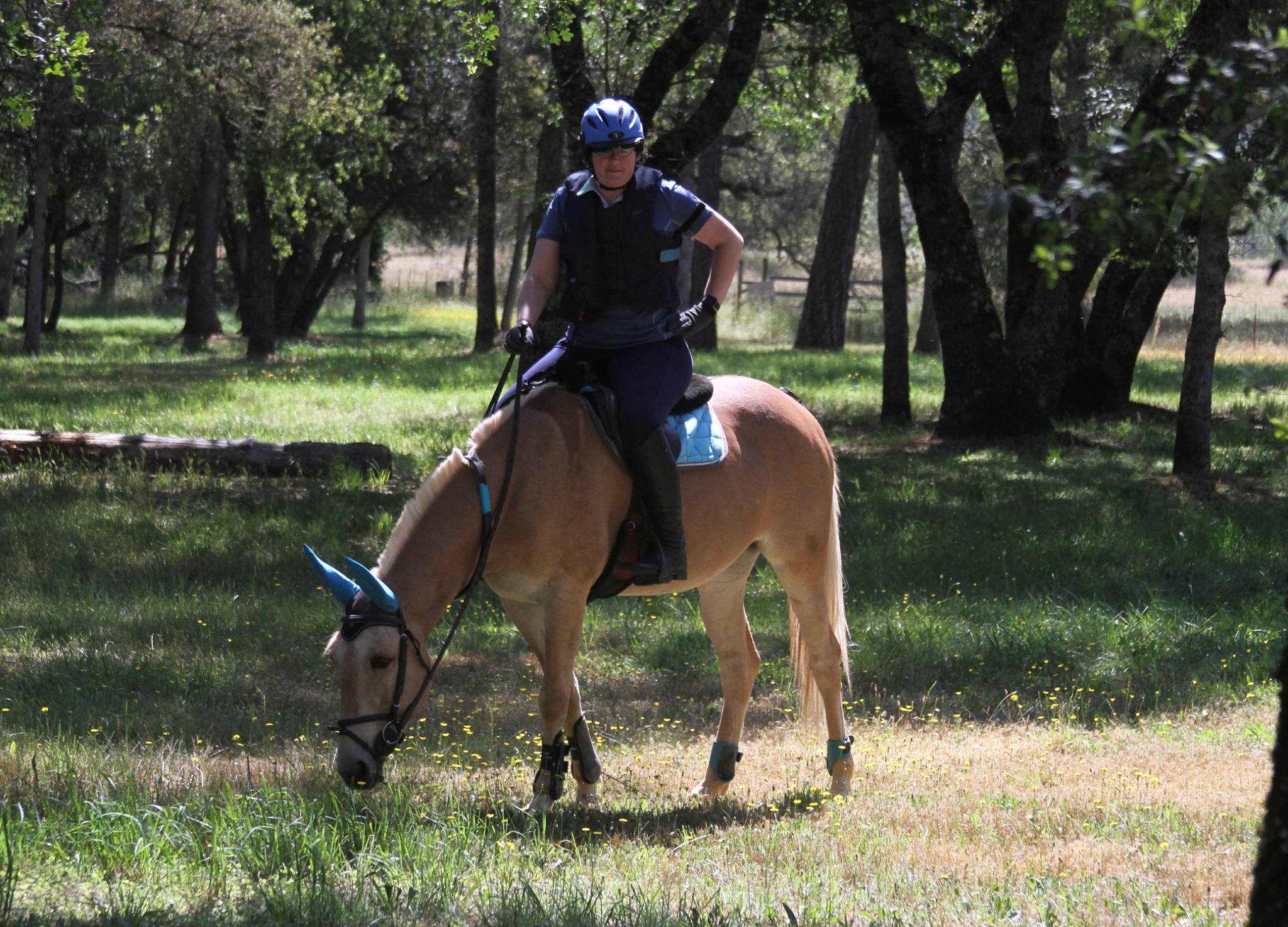 How Nilla would prefer to spend her time

We did banks next and Nilla just hopped up and down. There was some attitude, but it’s really just because she’s excited and has opinions, not because she’s trying to buck me off. After the banks we did the little house which Nilla flew over.

Then we did the coop that I was terrified of last September. It was nice to look at it this time and think it looked pretty small. We did a line from the coop to a bank to another log. The video for this one is pretty awesome. If you turn the volume on you’ll hear me saying “you’re not looking at this.” She basically lands from the coop doing her best dolphin impression and didn’t even notice the bank coming until she got there.

The other two in my group chose to do a novice coop after that. I really wanted to do some of the jumps in the other field and Nilla has bad hocks so I told Yves I’d like to skip some of the jumps. He was totally fine with that. In the next field we started with the big BN table which Nilla didn’t care about, but was freaking out because the tractors parked near it were terrifying. And by near it I mean like 50 yards away. You can hear me scolding her going up to the jump.

Finally we got to face our nemesis: the ramp we got eliminated at last September. My husband and I had actually taken Levi and Nilla for a hand walk around the course the day before to give Levi some exposure. We made them walk over a few logs and ditches. Since Nilla can coon jump, I made her do some bigger jumps including the ramp. She was still weird about it, but we got over it. Of course, I was so happy we got over it, I started patting and praising her right away and she took that as an invitation to try to take of bucking. I’m like, “good girl… NO! Good girl.” Brat.

I ran out of memory on my helmet cam at that point. Which is unfortunate, because we did a nice 2 or 3 stride (I forget now) combo which went really well. Then the other two in my group were doing a mini course of 4 or 5 jumps. I didn’t want to do the whole thing (I wanted Nilla to have some hocks left for the next day) so I put together a plan of 2 logs. Nilla had a huge objection to the second one though because it was even closer to the tractors. I really didn’t feel like having a tractor fight so I just took her to a different log. Yves said it was the right choice. The fight wasn’t about the jump and I wasn’t going to gain anything by winning it. It was a really satisfying schooling experience. I had a lot of fun and really enjoyed Yves’ instruction.

My husband was still pretty woozy, but hadn’t actually thrown up for a few hours and someone gave him some Zofran so he decided to hop on for his XC lesson at 1. I kept my riding gear on in case he needed to swap out, but – spoiler alert – he actually made it through the whole thing. Eventers are tough. Or crazy. Or both. You pick.

His group started with the same little log mine had done and Levi managed to make it over on the first try. This horse always stops at the first jump of the day even if it’s a little crossrail, but he jumped the telephone pole and reserved stopping for the next log. To be fair, this was a big log (to Levi). Levi has never jumped a cross country fence before this day and I think the highest he’s ever jumped is like 18″ so this log was asking a lot. 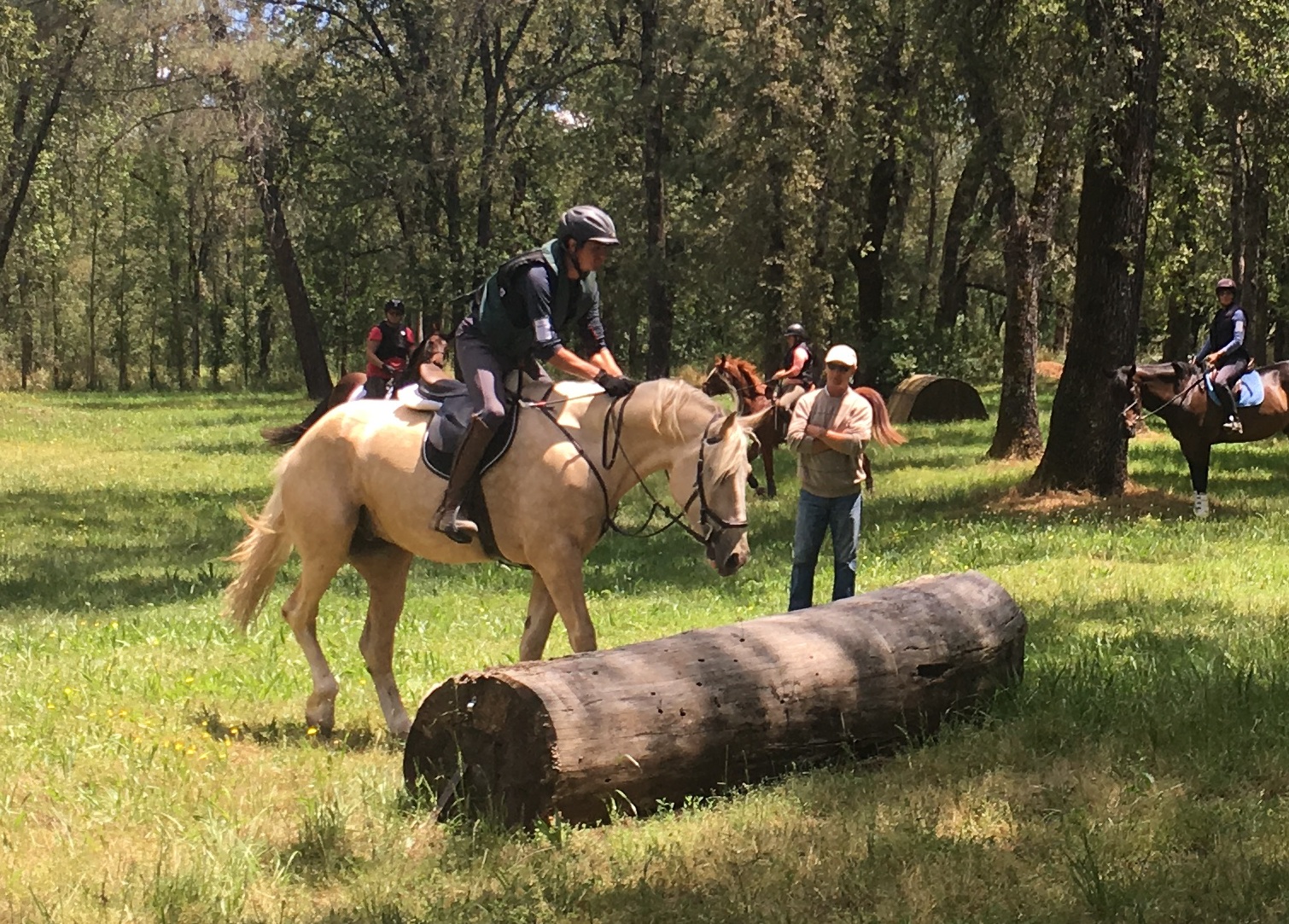 He did offer to scramble over it from a stop, but my husband managed to drag him away and re-approach. If you watch the video, you can see Levi keeping his head down to stare at it with suspicion and he made sure to clear it. 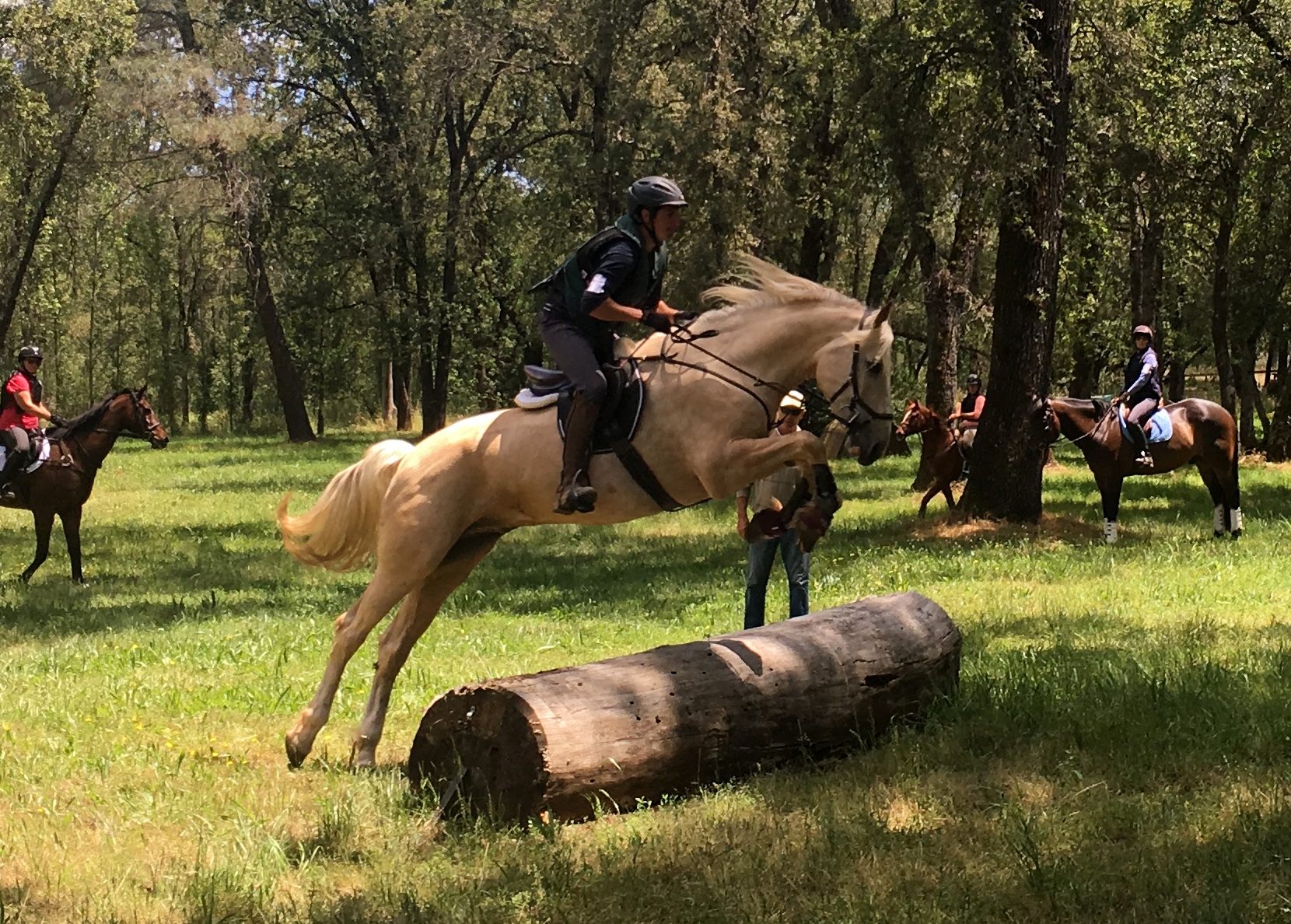 Around this time, Levi decided it would be best to slam on the brakes and buck after jumps. Forward became the lesson there. Levi might be a complete brat, but he hasn’t really figured out bucking so it was mostly a lot of downward head tossing. My husband rode him really well for how sick he was. This is also maybe the 6th time my husband has ever ridden Levi so it was doubly impressive. 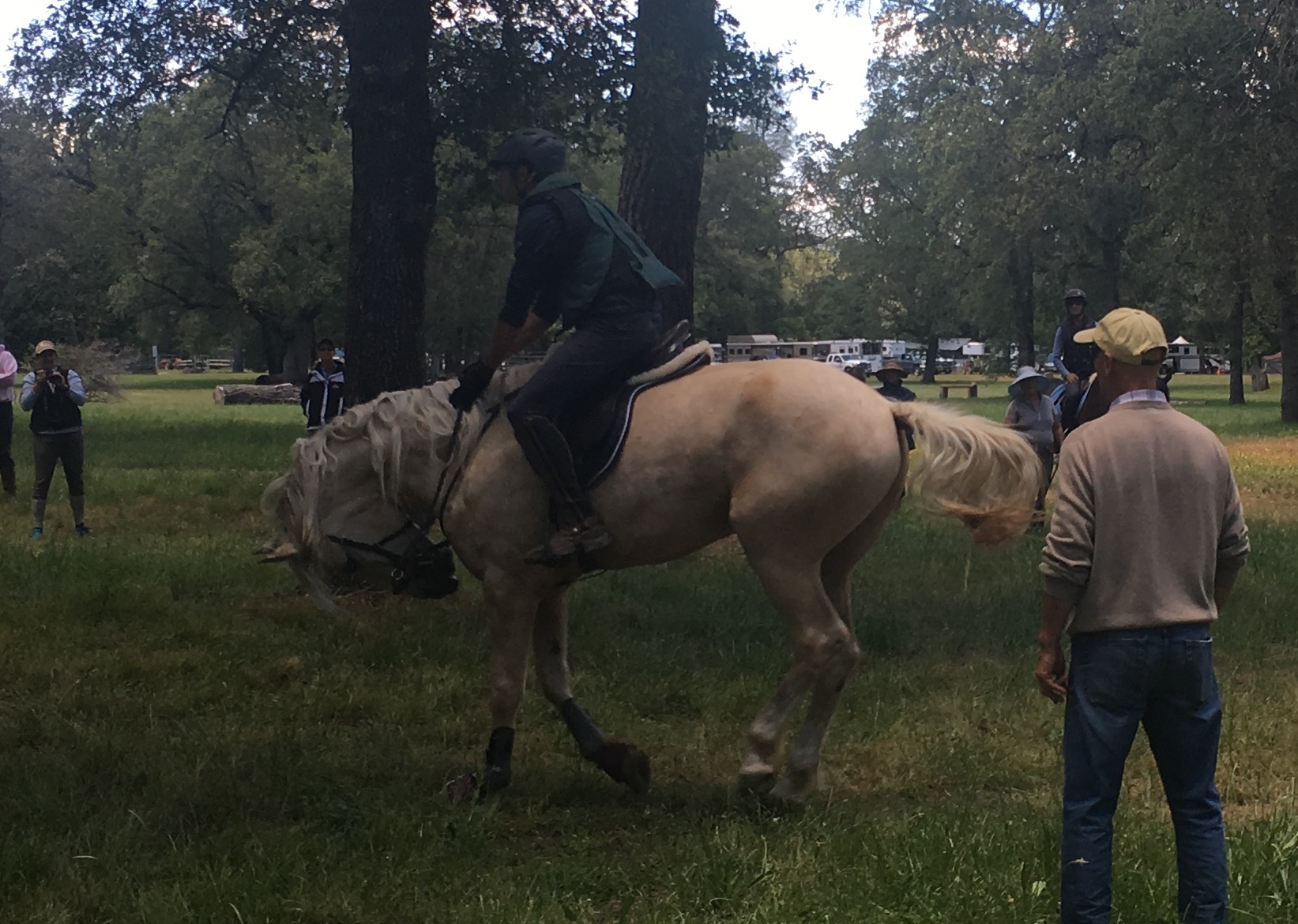 After the log, the group went over to the banks where Levi really impressed Yves. His comment was “He’s going to be really good at this when he figures out how to not be green as grass.” One of the other spectators was telling me how lucky I was to get a comment like that from a legend like Yves. I was really happy to hear that. Levi was still being a brat and tossing his head after the jump, but he was perfect about the actual jump. Not a moment of hesitation going up or down. 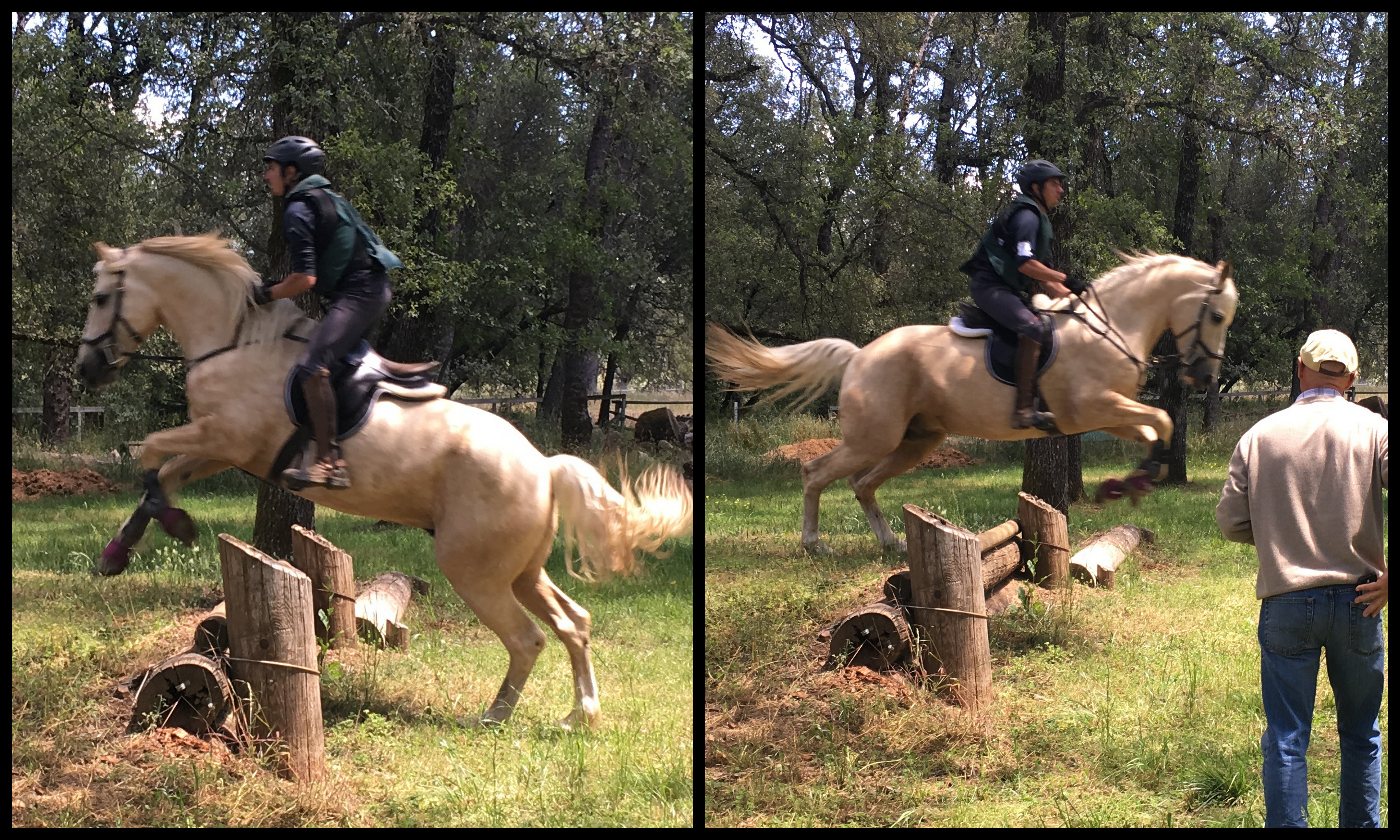 After the banks, the group went over to the double log/ faux trekehner I had done with Nilla. I was pretty surprised they did this jump. Levi has never jumped anything higher than an 18″ vertical and he knocks even them down about half the time. A solid obstacle at true BN height seemed ambitious to me and I really think I’d have chickened out of doing it if I’d been riding him. 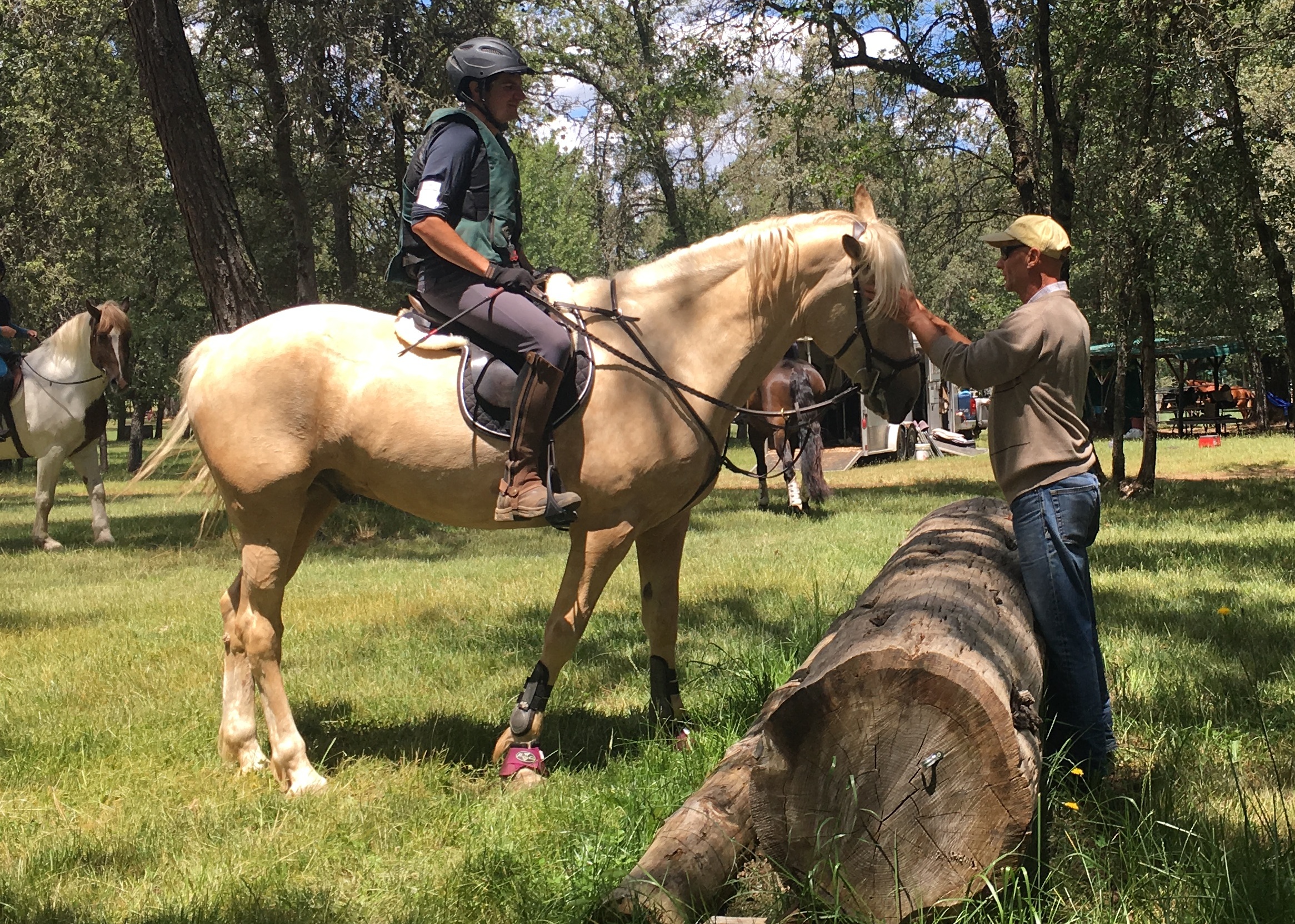 Yves started with having the horses come up and look over the jump. He said for schooling if they can walk up to it and look over it, then when they go to jump it they don’t need to peak at it and they already have the memory of going over it with their eyes. (He did this method with my group too and it was very helpful, but he also had us practice some where they didn’t see it first since we’ll have to do that at actual events). Yves was also offering pettings at the jump. Levi loves pettings but hates his ears touched so Yves was doing this really cute move of petting him, then sneaking in an ear touch and going back to pettings.

I think the “meet and greet” worked though. Levi just went right up and flew over that double log.

Yves’ comment “as soon as he learns how to not be green as grass, he’s going to be very good at this.” #blmmustang #demandthebrand #eventing #crosscountry #horsesofinstagram

If you watch the helmet cam video, you can see that Levi really escalated the try to stop and buck after the jump thing, but my husband got after him and kept him going. They moved on to another BN log after this. Some of the group did the little log and circled around to a bigger log next to it. My husband stuck with just the smaller log, which is good, because at this point I discovered that this is what his girth looked like. 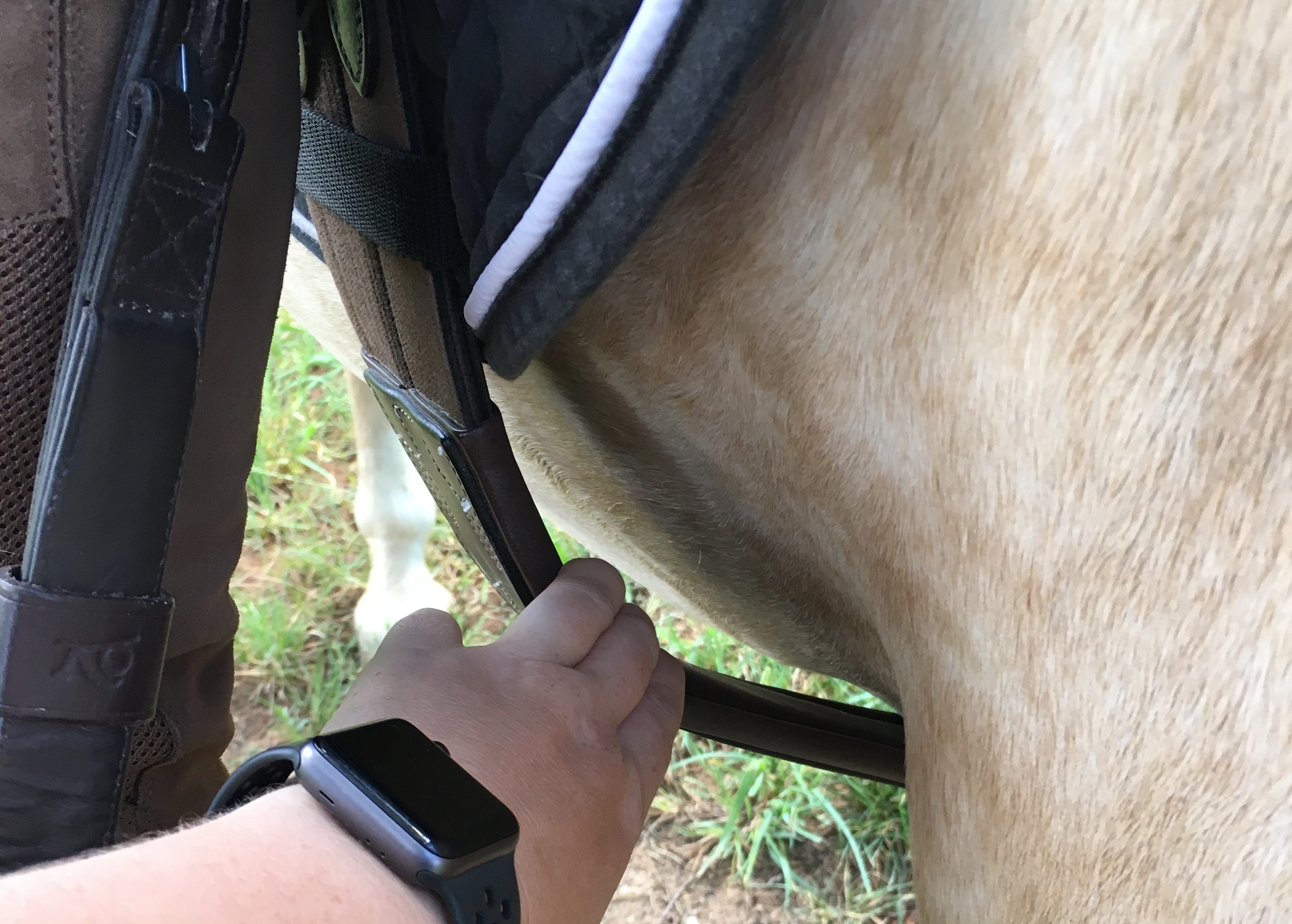 The group went over to the other field and did some walk through the water. Because of all the rain, the water was really high so Yves wasn’t having people jump in or run through the water. I missed the beginning of the water because I stopped to check on the dogs, but my husband said Levi was a bit squirrelly about going in. I’m not shocked, but I’ve been taking him into the creek a lot and thought I’d gotten him over his water aversion. This water was very murky though so my guess is he just didn’t trust it. 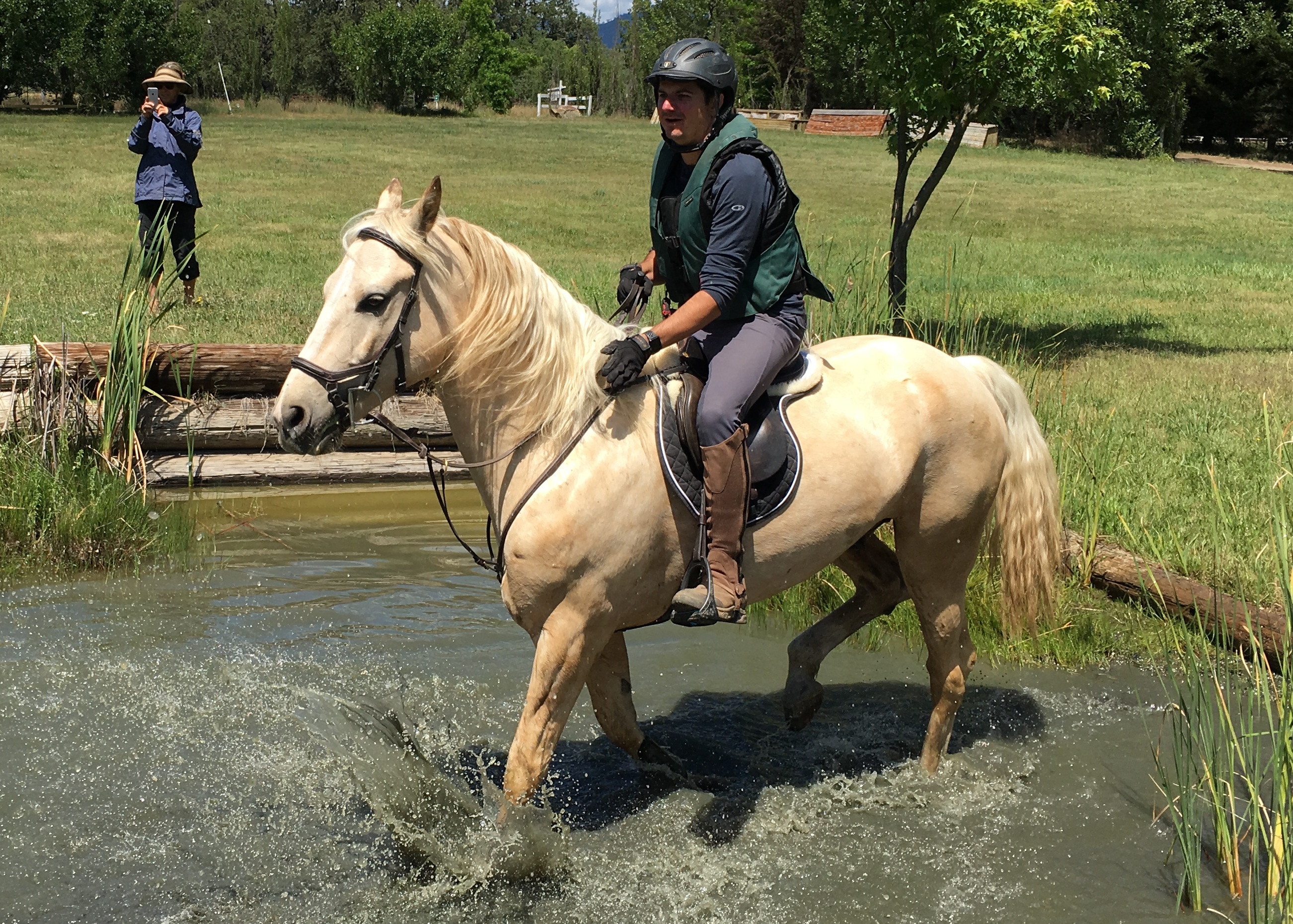 After the water, they went to a smaller log in the other field. Levi was really tired at this point and barely managed to pick his feet up over the jump. I don’t think this horse has ever jumped this much in his life – combined – so I don’t blame him. 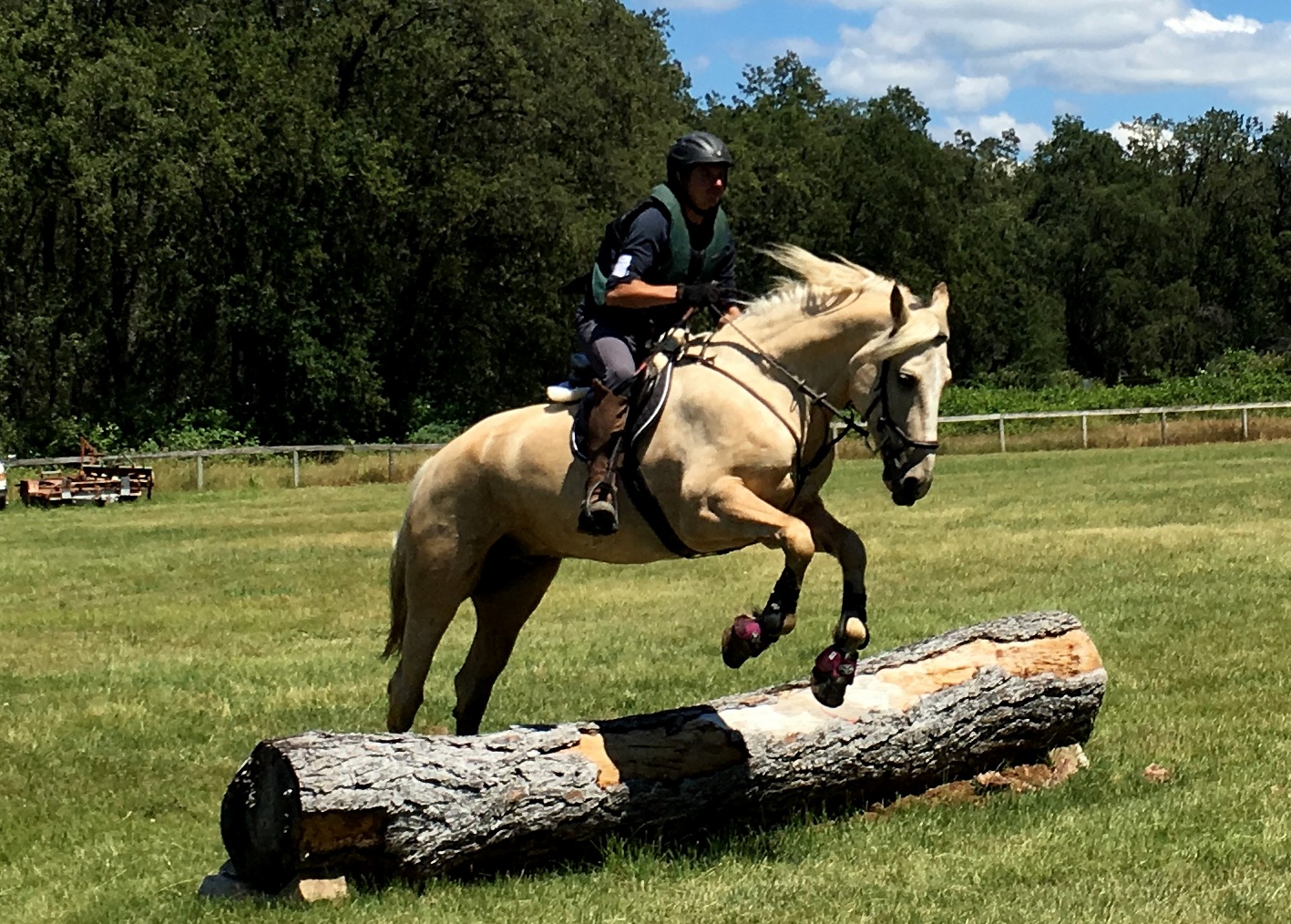 But my husband really got after him and finally got him to canter forward after the jump. 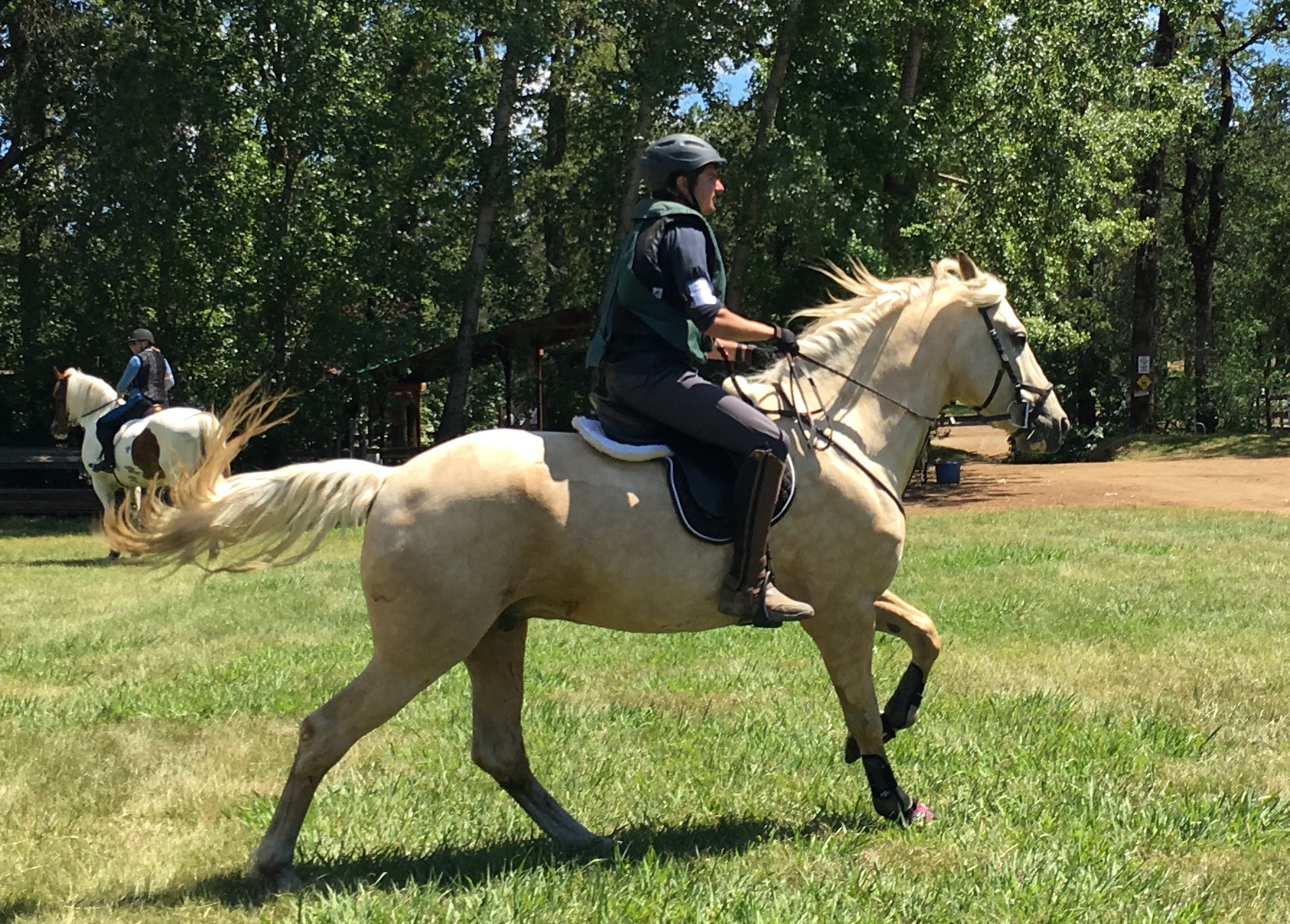 At that point, my husband was feeling pretty done in from being sick and doing this much riding. At first he said he’d just sit on Levi and watch everyone finish and I was like, you’re sick. No one is going to think badly of you if you stop. You already rode more than anyone thought you would, just get off. He conceded and went back over to the trailer to sit and eat ice chips.

I walked Levi over and untacked him. He was really such a good boy. As I mentioned, he’s never jumped this much before and he’s certainly never jumped this high. He kept his brain in his head even when other horses were running around. We were both very impressed with him. 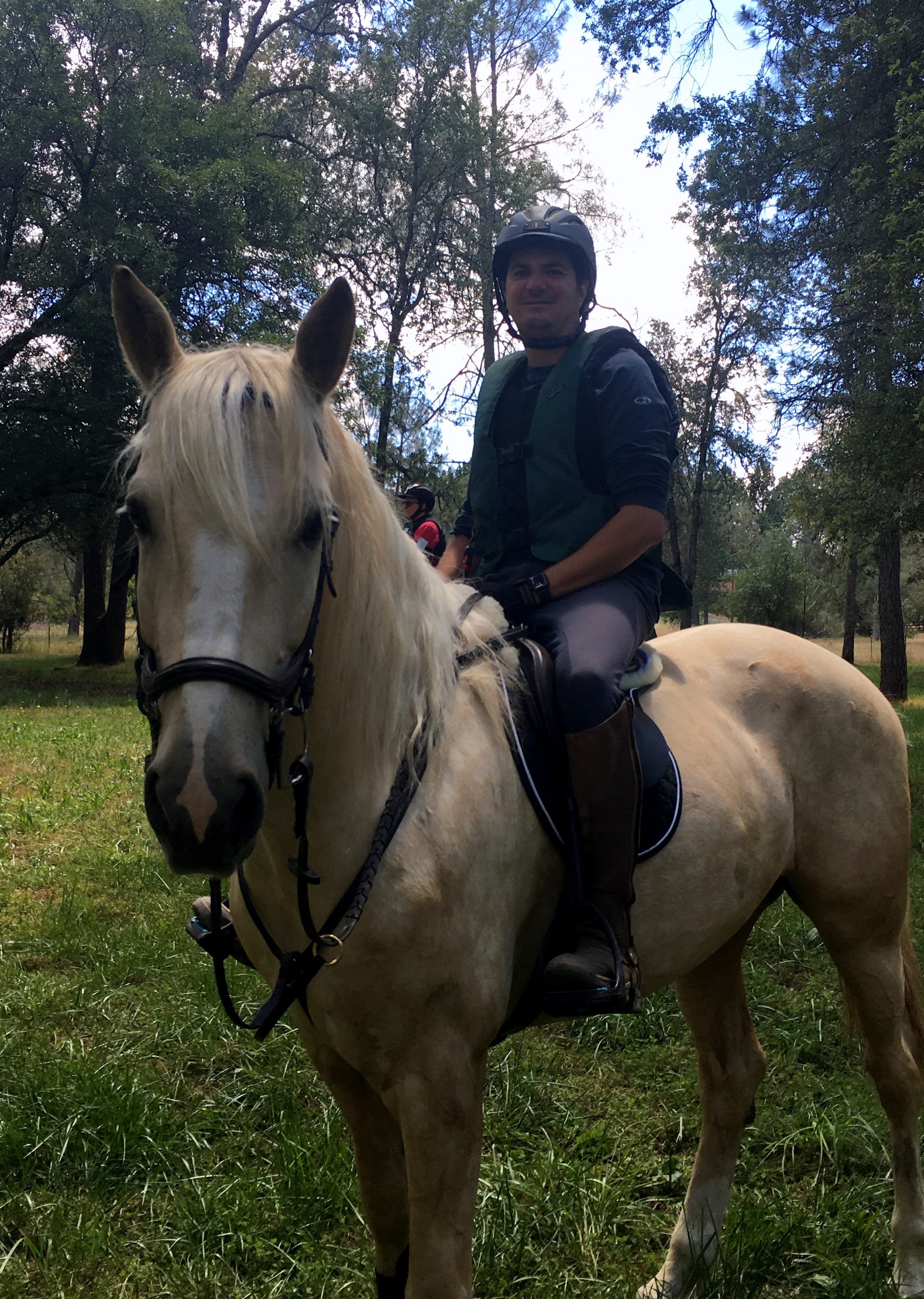