The stadium part of the clinic was with Alexis Helffrich. I was scheduled for 11am and my husband for 12:30. I’m going to split this post into two. 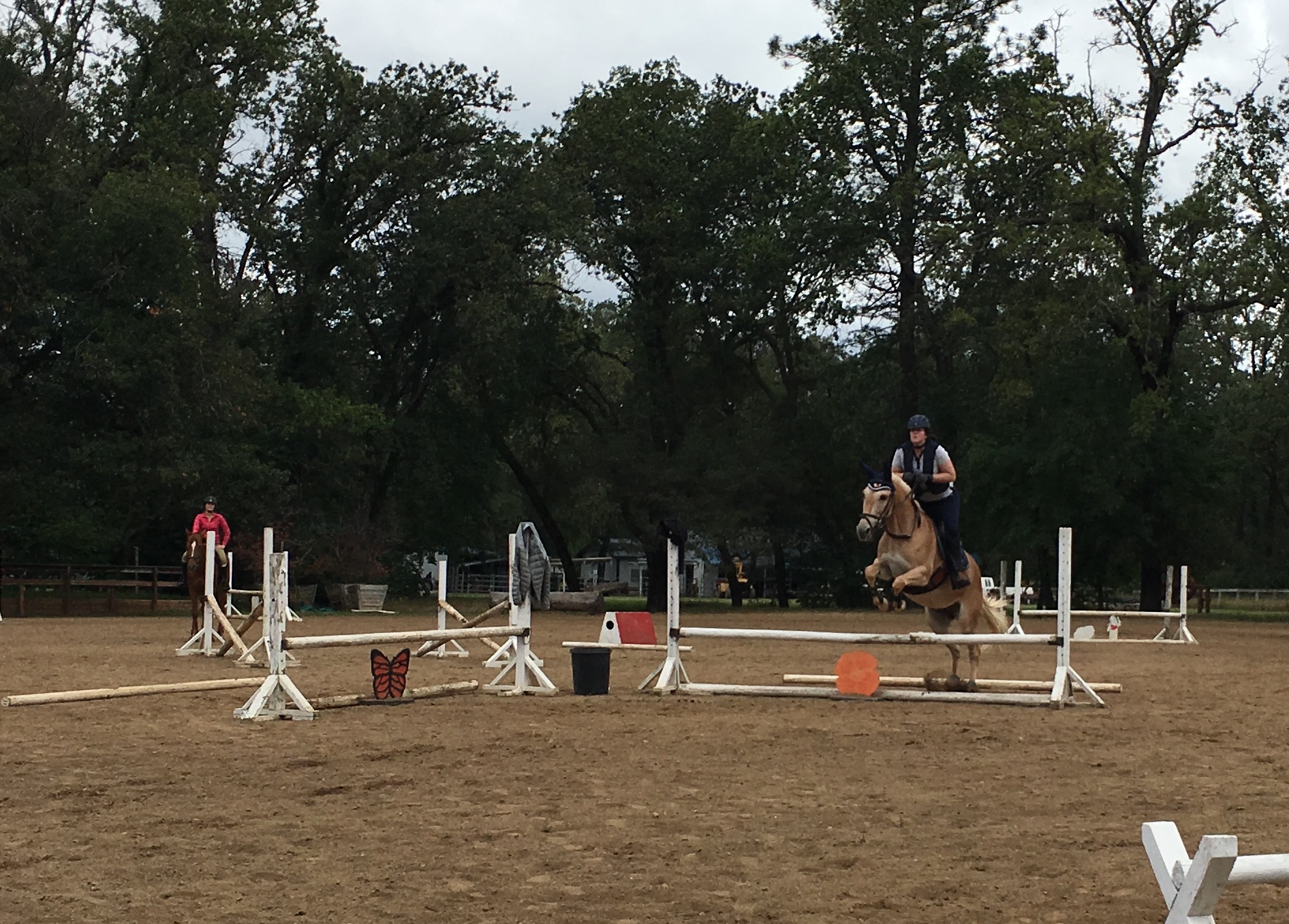 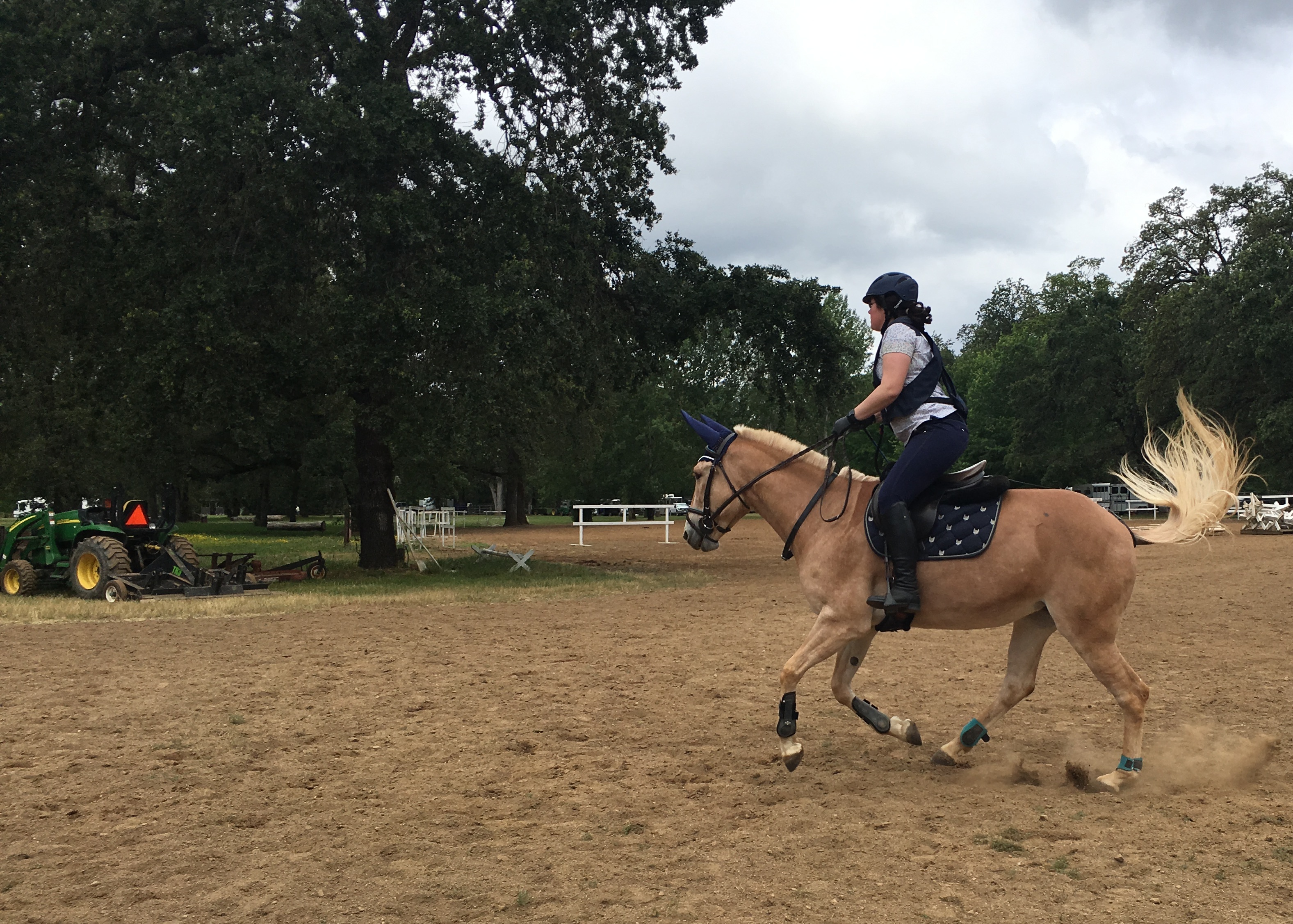 Most of the time we landed and turned left after this angle, but one time we had to turn right and she was pretty sure I was riding her straight into a horse-shredding machining.

Alexis really wanted everyone to be sitting in their saddles and riding to the jumps – no half seat or jumping ahead. I had a really hard time with this. Not because I don’t think he’s right, but because I have a lot of bad habits and sitting out of the saddle for jump work with Nilla is a big one. Right up there with my insistence on keeping my hands up. To be fair, the mule continues to “play” after jumps, but I really shouldn’t have my hands quite so high.

After a few rounds of vertical to cavalletti, we added a turn through the bounce. Nilla was a bit sticky about the bounce and I’m not sure why. She’s normally great for grid work.

She was also being a complete ass about the other end of the arena. I don’t know why as there weren’t any freaking tractors there. As we came out of that corner to do an oxer, I was staring at the jump trying to figure out what the cut out beneath it was. I wonder if this is how horses who spook at jumps feel (I just wanna look at it).  Obviously I should not be staring down at the jump because I’m pretty sure I convinced Nilla it was scary too. Picture is super far away, but you can see her eyeing it suspiciously. I’m pretty sure we knocked it down the first time. My fault. I know better than to look at jumps, I just wasn’t thinking about it like “omg how scary,” but rather “is that Eeyore and Pooh?” But the mule doesn’t know why I’m staring daggers at it. 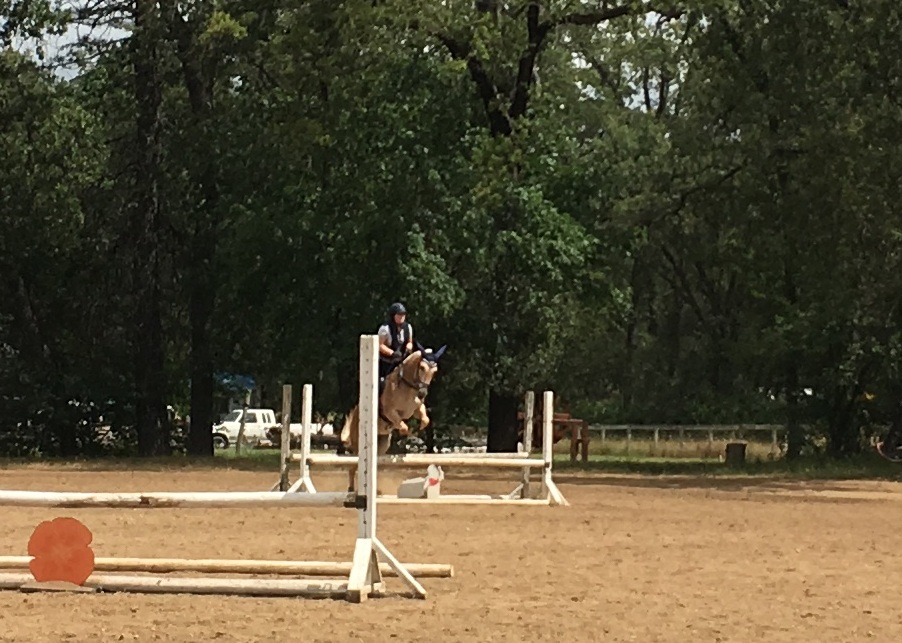 The nice thing about Nilla is that she does not want to touch jumps. We came back around and she made sure to clear that oxer. Alexis commented that she took it like it was 6″ bigger. 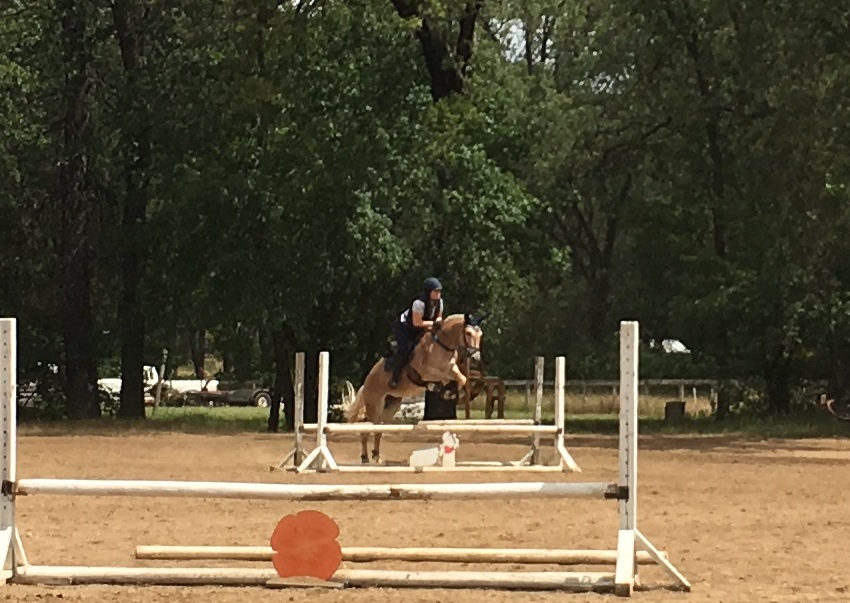 My husband eventually came closer to the jumps for better pictures. Alexis kept changing up the courses and doing a lot of 90° turns so it was pretty challenging. Some of the people in my group were having a hard time remembering a new course every time around and I found it hard too, but I appreciated getting more out of the lesson by doing more. If we really messed up a turn or a line, he would have us re-do that section, but for the most part it was all new courses every time. 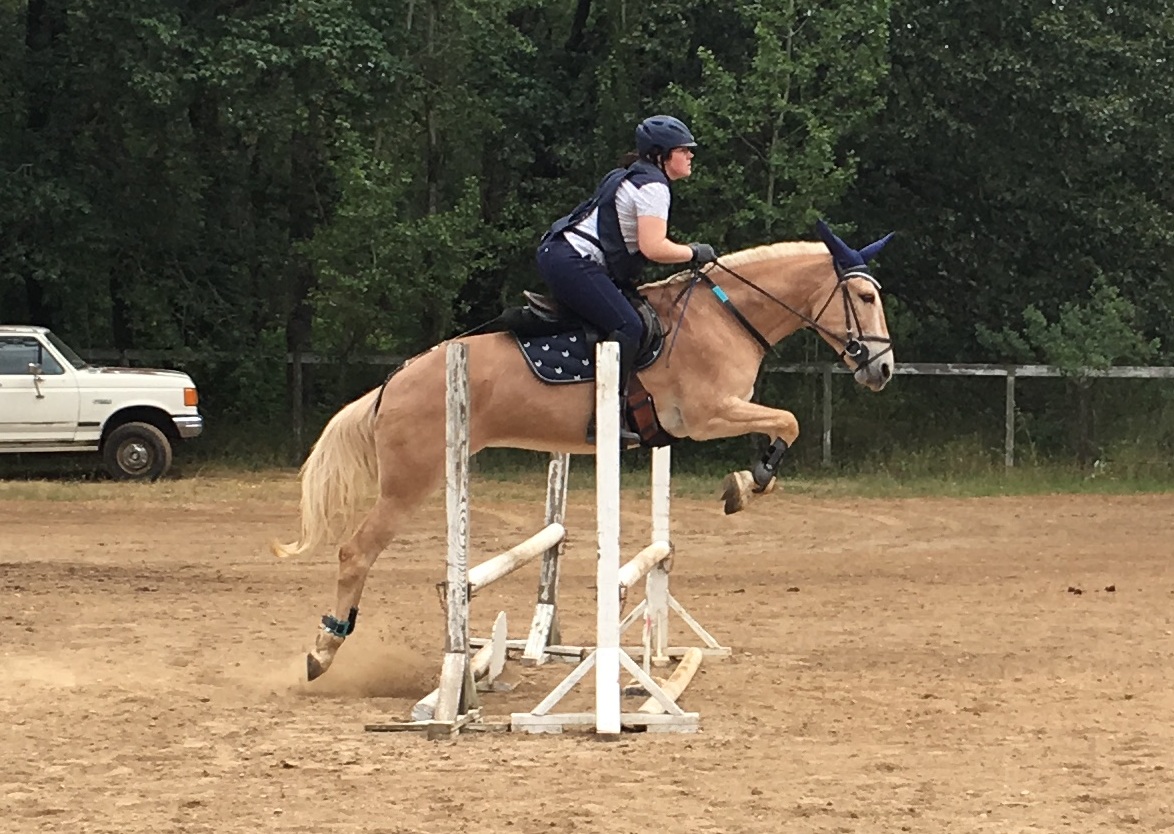 Near the end, Alexis added a two-stride combo down at the scary end. We had a hard time with this because it was off a hard 90° from the scary oxer towards the part of the arena she had decided was terrifying. 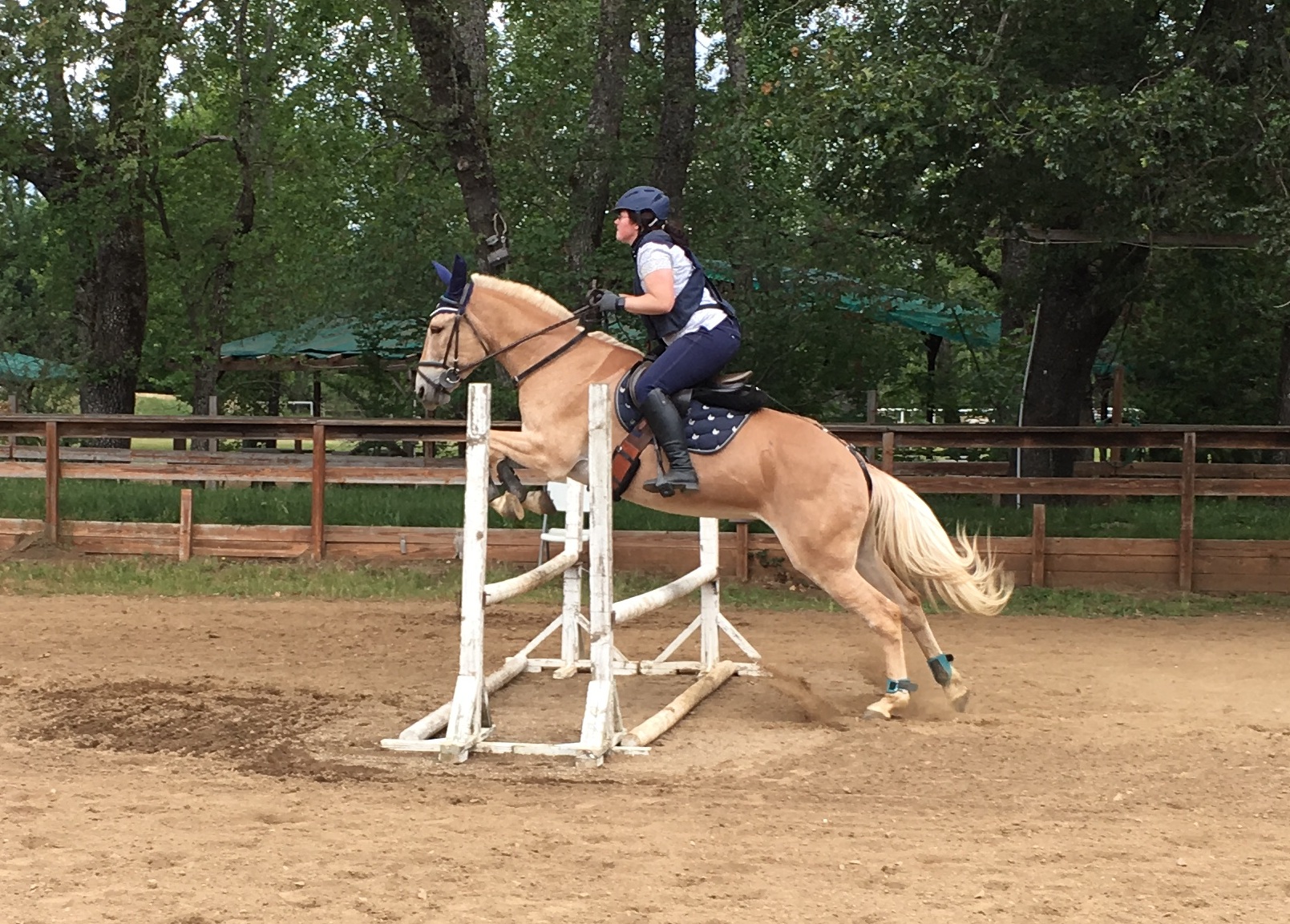 We had to do this a few times to get her settled. The mule and I have a bit of a contentious relationship. Because she bucks after the jumps, I ride with my hands too high anticipating needing to get her head up afterwards.  I have tried jumping with my hands on the neck strap and not touching her at all. She still lands bucking so it’s not cyclical. But I really don’t need my hands up this high while jumping (I just need to keep them up afterwards). However, it’s a defensive/subconscious move on my part so I’m having a hard time not doing it even when I think I am keeping my hands down. I need to practice more. 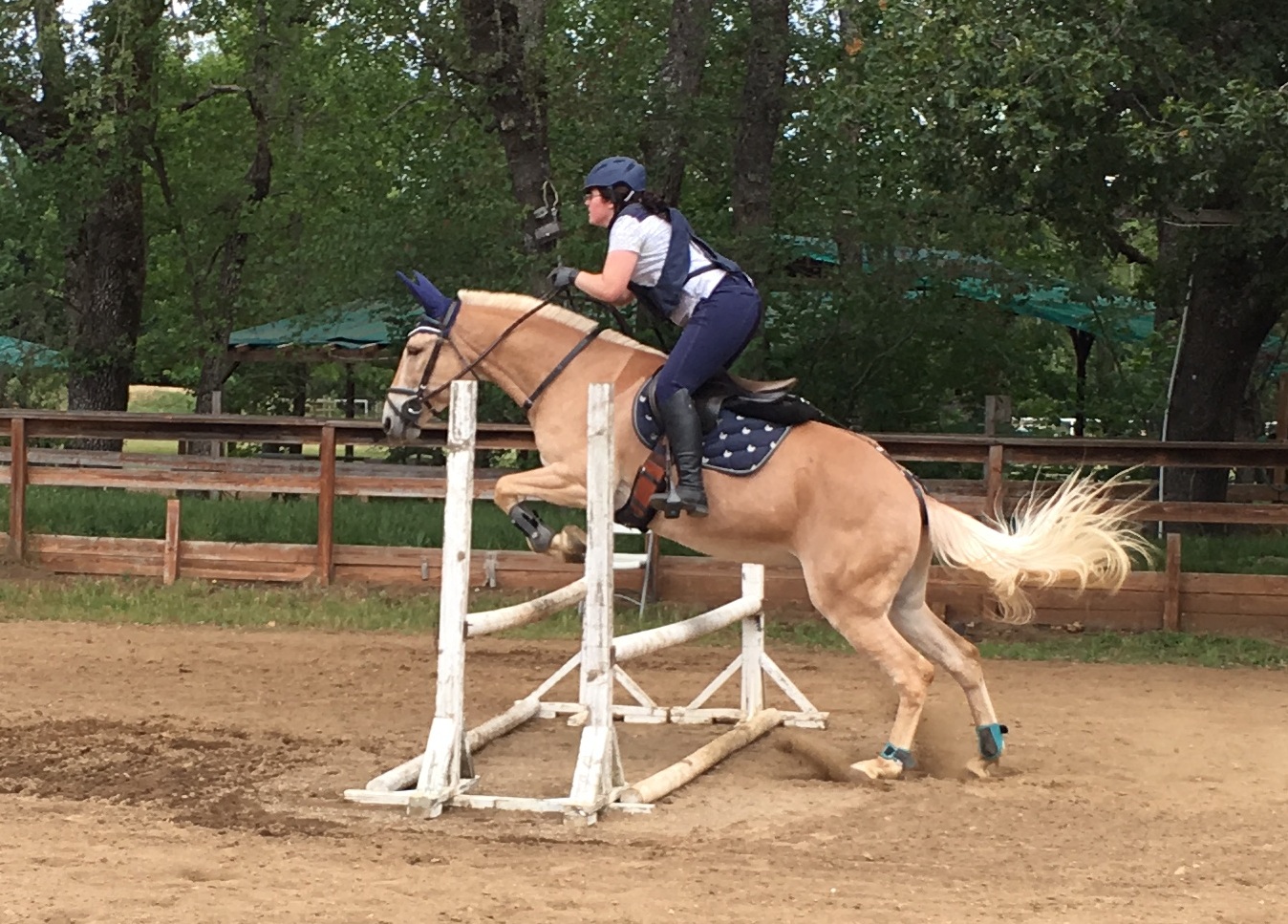