When we started walking this course, I was typing things into my Course Walk app and my husband had the show brochure with course map. The BN course was black numbers on yellow background. As we approached the first jump, I was like, omg, this jump can’t be BN, can I see the book? Nope, it was definitely the right color. It was just huge.

While the jump wasn’t actually huge (I’m just terrified of cross country jumps), the whole course was maxed out. When I walked the Starter course at Camelot, I checked out the BN jumps and most of them looked doable. I was actually regretting not signing up for BN at Camelot. However, the jumps at Eventful Acres were terrifying.

Here’s a link to my Course Walk, but you can flip through this slide show to see the jumps and my commentary:

And the jumps weren’t just maxed out, they were things we’ve never done, like a ramp and a feeder, or a jump immediately up from a large creek hollow. I’ve also never jumped Nilla up or down maxed out banks, only baby banks. And two of the jumps I swear were Novice height. We got to #9 and I was just like, “I don’t want to jump that.” Then we got to the water and I was like, “Well, I’m going to be eliminated here.” Why?

Because the pond was full of leaping frogs. Remember how Nilla doesn’t like lizards? Well, she also hates water. So a water obstacle full of what are essential hopping lizards was basically our worst case scenario. Even my husband, who kept telling me to “you’ll be fine” every time I complained about the scary jumps, was like, yeah, that’s gonna be a problem. I really should have continued to video the pond as there were hundreds of frogs jumping as we went around it’s edge.

Really, 15 was the only jump that looked easy and I figured I’d be eliminated at 13 if I even made it that far. Needless to say, I didn’t sleep well Saturday night. The next morning I was such a bundle of nerves I was feeling literally sick. When I went to go into the start box, the guy running the start box gave me a little talk like, I’ll give you a 30 second warning then count you down from ten, etc, etc, and most importantly, have fun. My response? I think I might throw up.

I will add some commentary:

00:00 – As we exit the start gate, Nilla explodes into a rodeo performance literally as the nice man is saying, “have a nice ride.” You can’t hear it on the video, but I could hear him saying “rider 121 on course” and thinking, “kinda.”

1:20- We’ve never jumped such a large bank and as it looks like a fence from a distance, I wanted Nilla to trot to it and see that it was a bank so she’d know how to negotiate it. Since I know she can jump a 2′ bank from a standstill, I knew she could manage this from a slower pace. She popped right up it like no big deal.

1:51 “Are you looking at this?” You can see from her ears that her attention was totally on something else in the trees. When Nilla sees a jump, she will pull me to it and I knew her attention was not on this jump.

2:18 – I made her trot the down bank as well. After the last time we schooled banks and she launched herself off and then tripped and nearly killed us both, I did not want her running to this drop. She took it perfectly.

2:28 – first refusal. You can tell from the camera that I am staring at the jump. If you read my commentary, you know I was absolutely not okay with this jump. It was huge with very uneven footing leading up to it and it had lizards living under it. So obviously staring at it was the perfect solution. We did fine on re-approach when I kept my eyes up a bit more.

2:50 – after 9, the course goes through the jumping arena and the warm up arena is to the left. I made the mistake of clucking Nilla on to make up some time on the nice footing and she tried to bolt over to the warm up.

3:27 – I also stared at this jump as we went over it because it was huge and I’m an idiot.

3:31 – I felt like my saddle slipped forward so I was checking on my DIY crupper.

3:40 – The jump judge right before 12 was really scary. Actually I think the decorated jump she was sitting near was the scary part, but Nilla did not want to go near it and I really needed her to as #12 was huge and I wanted a straight approach to it.

3:56 – “You gotta go, you gotta go.” She tried to slam on the brakes for the water, but was already practically in it by that point.

4:00 and on – 3 refusals. I think the main problem here was that I had mentally written off this jump. There was no way to my mind that I’d ever get to this jump so I didn’t really have a plan. I was still busy praising Nilla for actually going through the water and that ramp comes up right away. Once we had a refusal, I didn’t have a great re-approach to the ramp and I didn’t think I could go back through the water (although this is where not having a trainer or really knowing the rules hurts me so readers can feel free to chime in here). 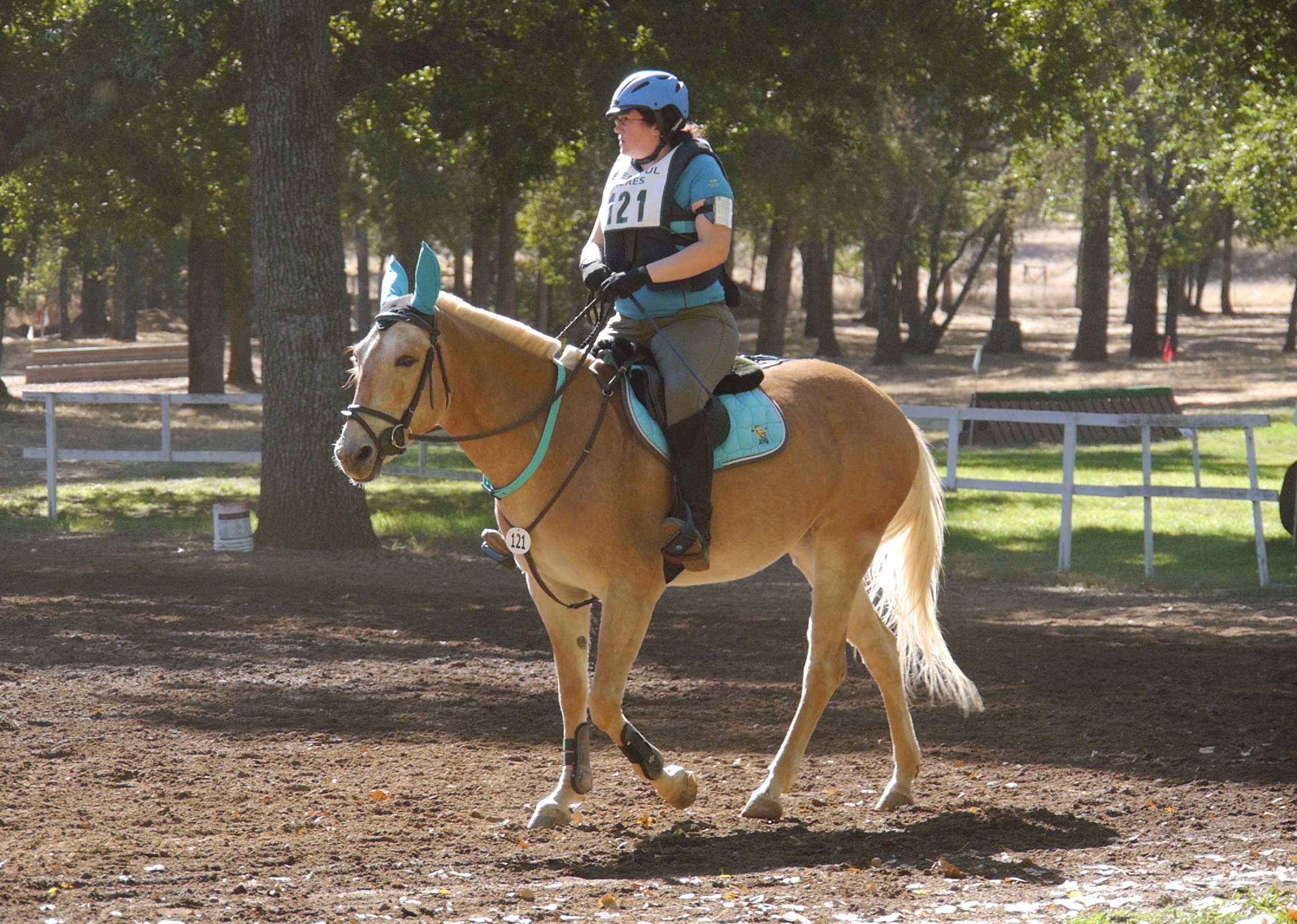 As much as getting eliminated sucked, I actually wasn’t that upset. Nilla was a good mule. Her refusal at #9 was really my fault. #14 was my fault as well although I felt like I rode that one a lot better, but I was not really prepared for it and we’ve never schooled a jump like that. Despite my stomach in my throat level of panic over this course, parts of it were really fun. Nilla absolutely loves jumping. As long as she locks on to a jump, she will drag you to it and fly over it. If you watch her ears in the video you can really get a sense for what she’s thinking.

The Eventful Acres property was amazing. I haven’t seen this much green grass since I lived on the east coast. The owners were so nice and accommodating. I would love to go back here to school and would attend every show they put on if they ever do another one. Even with the elimination, it was a great weekend.

A few people commented yesterday on Nilla’s hocks. Thanks for the concern. I do appreciate it. Nilla was cleared by the vet to go to this show. And the bucking post jump is something she’s done as long as I’ve owned her. She only does it for the first few jumps and then quits although she’ll sometimes throw a surprise one in mid-course.  I’m not ruling out that something’s wrong with her and I am making a chiro appointment. But mostly we just don’t jump much to preserve her hocks. I usually only jump at shows and once before for schooling. So like 3 times a month and not at all during the winter. And as multiple vets have told me: she’s a mule, if she can’t do something, she will let me know. Right now, she still wants to jump.