An alternate title for this post would be Breaking Tack.

In my very limited experience, I will say that I really like running dressage then XC and stadium last. Having stadium after dressage just doesn’t work as well for me. But I do see how it’s easier to organize/run as Dressage > Stadium > XC.

My husband’s stadium time was close to mine so we tacked up walked over together. As we were heading over, Nilla stepped on her reins and broke one of them. Well, I guess we’re sharing reins now. When we got to the warm up arena we swapped reins. Stadium was actually running ahead of time so I’m glad I got there early. I needed as much time as possible, because Nilla was lit. 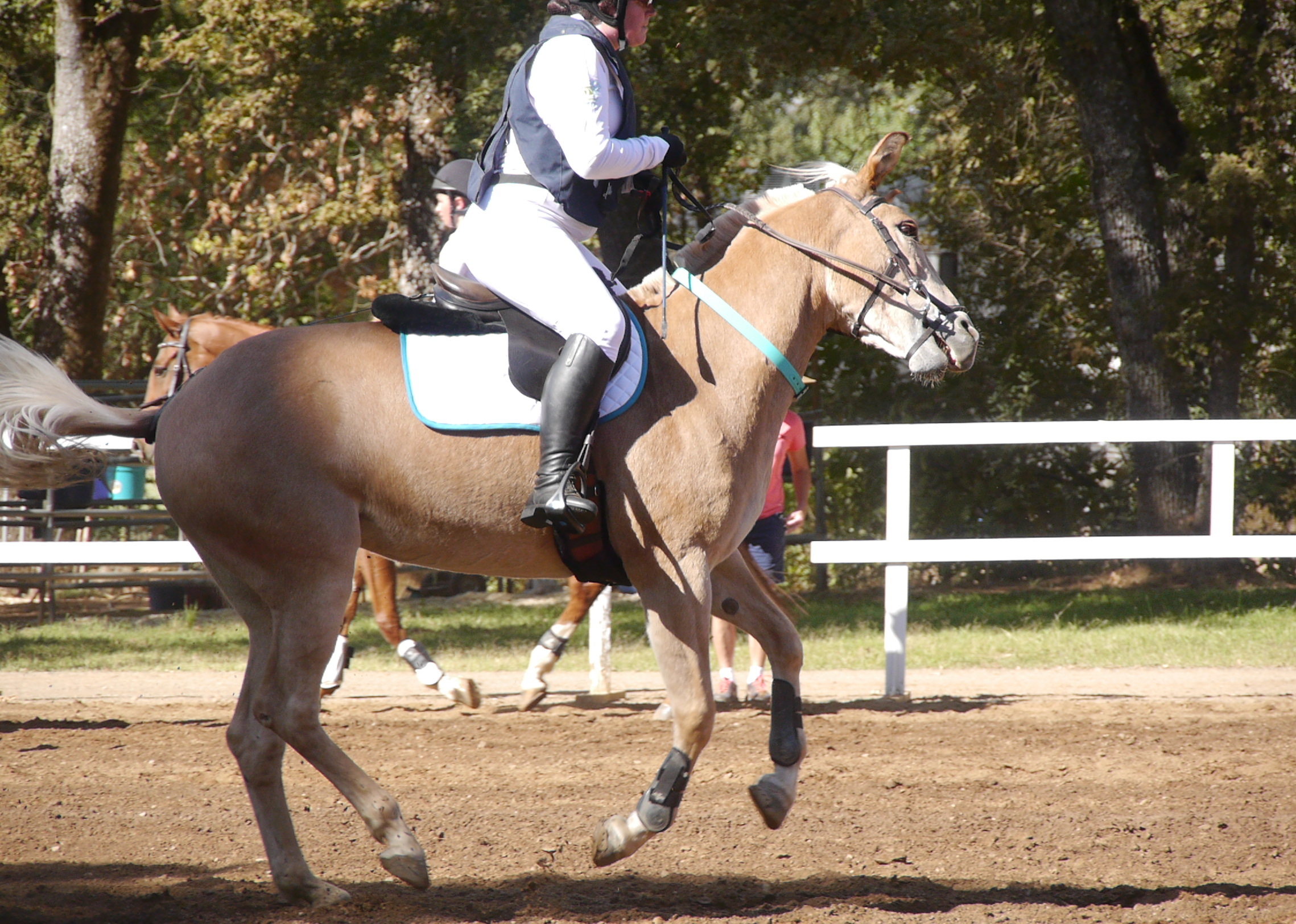 I was already in a panic because we had walked the cross country course after dressage and I was not okay with how big the jumps were. Seeing that the stadium course was larger than any course we’ve ever jumped before just piled on the nerves. Add in Nilla “playing” after every jump and I was freaking out. 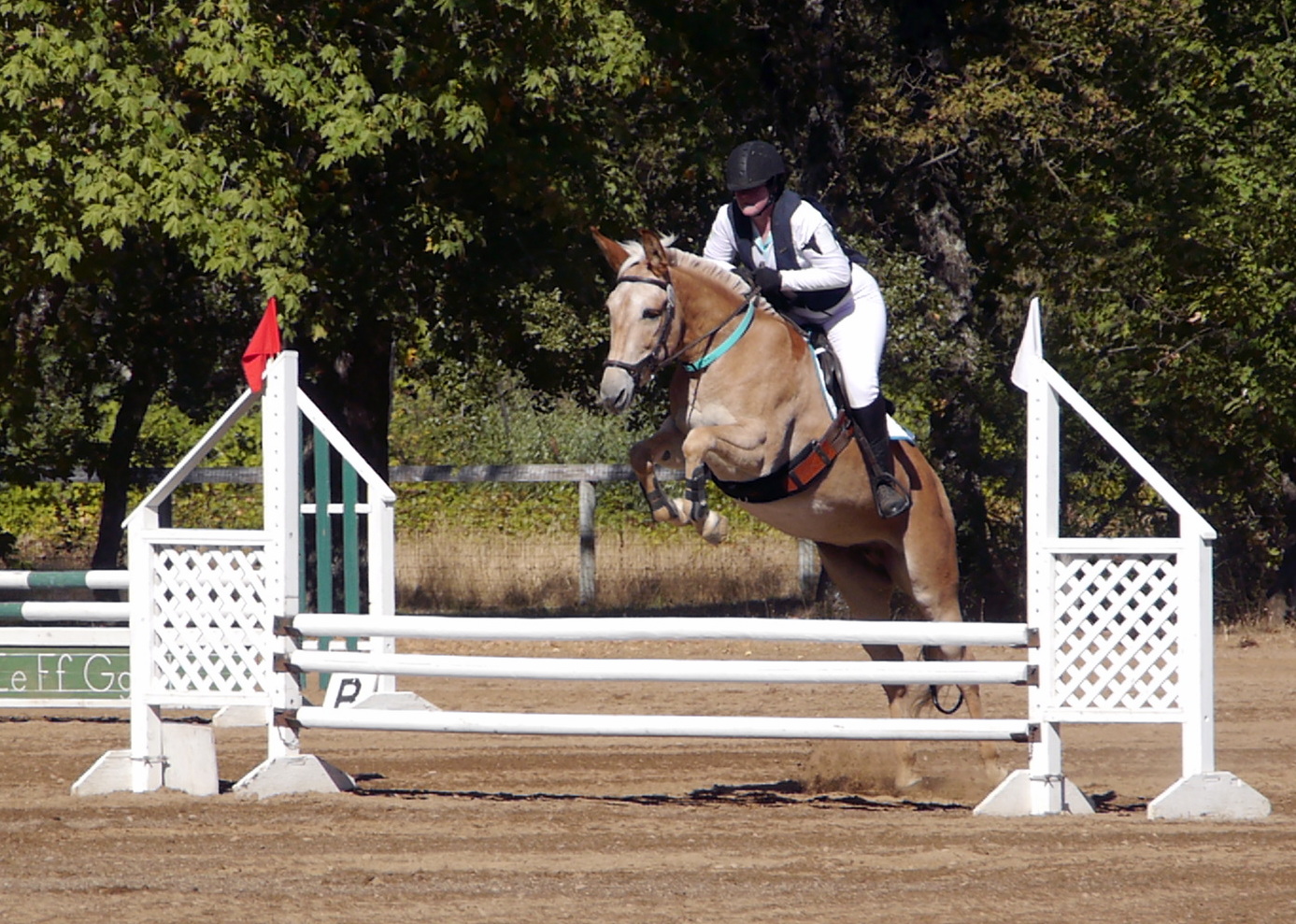 The thing is, Nilla doesn’t jump jumps at their actual height. She adds a foot or so on top (see above). And cracks her back over them. Then she lands bucking. And since I don’t/can’t trust her, I sit back hard over jumps so even in stadium I look like I’m going down a bank on every jump. It’s not pretty. So when we had a bit of an odd landing off of jump #1, I didn’t think too much of it. We jumped #2 and the saddle went flying up onto her neck. I very barely stayed on. 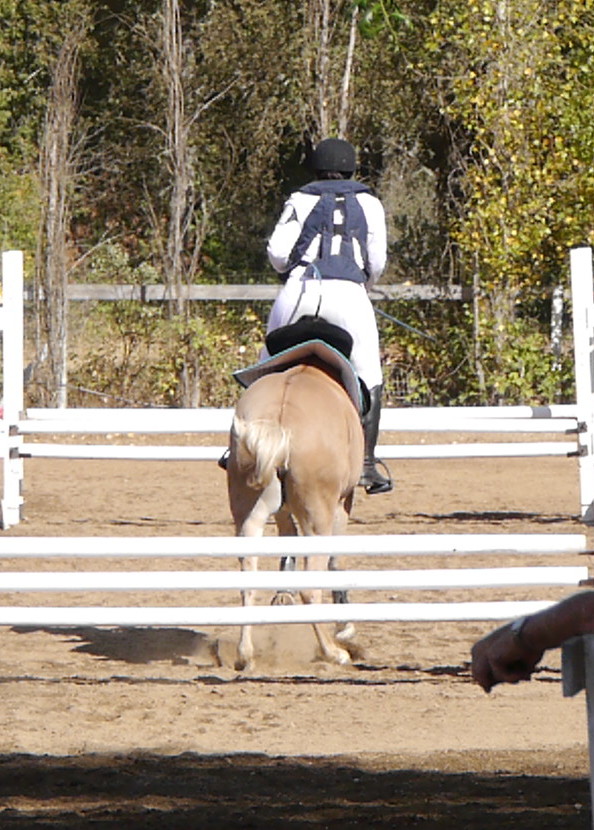 I pulled her up in between the jumps and turned to find my crupper broken. Well, frick. I managed to wiggle my saddle back a bit, but I couldn’t get it back where it should have been and I couldn’t really jump without a crupper. Double frick. I finally stopped wiggling around and figured I was getting eliminated, but the judge offered to let me go fix my tack and come back. 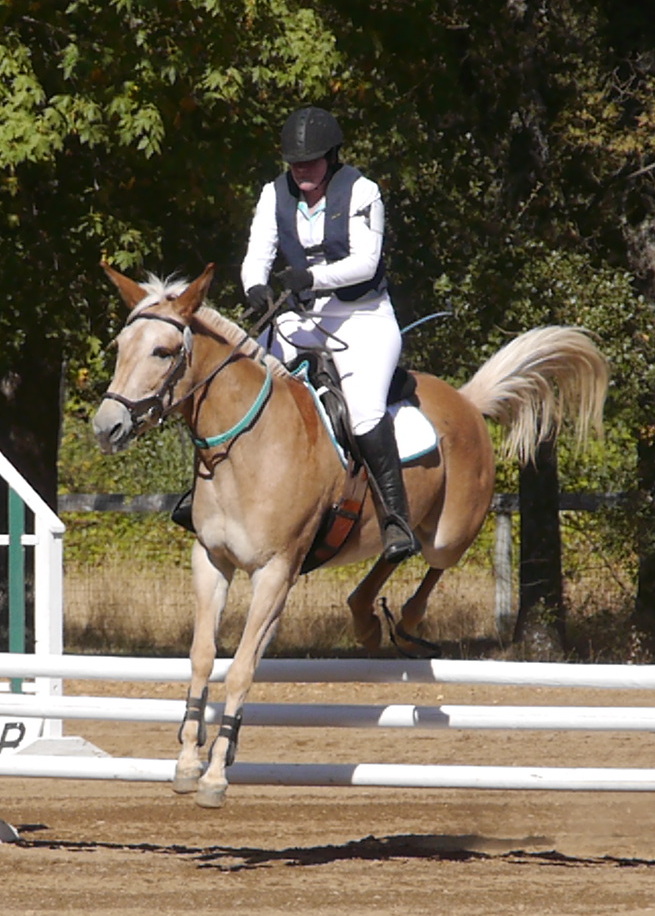 You can see the moment my crupper breaks. And yes, I know my form sucks. I already spent a paragraph talking about that.

I hopped off, grabbed my broken crupper from the ground at #1, and then jogged back to the trailer. Well, jogged as much as I could given I was wearing tall boots and have asthma. So mostly speed walking with a bit of jogging. The thing is, I don’t have a second crupper. Well, technically I do, but I can’t find the second one. (I’m ordering two new ones so this will never happen again). Luckily, the part that goes under Nilla’s tail hadn’t broken, just the strap connecting that part to the saddle. In a rush, I began frantically disassembling my endurance breastplate. I managed to attach the two d-ring straps to each other and use them to connect the crupper to the saddle. Then I hopped on and rode back to the arena. 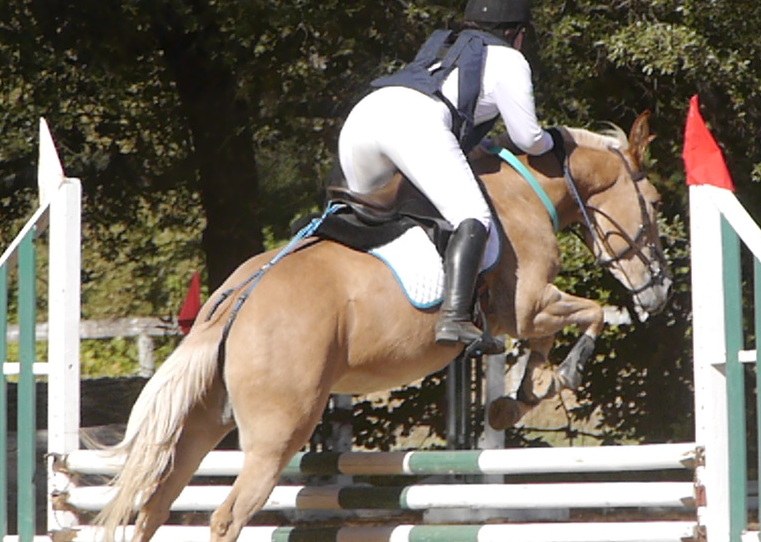 I forget to get a better picture of my rigged crupper

There was only one rider left in the division so I barely made it back in time. I hopped over one more practice jump to see how she was and the answer was pissed. That’s not really surprising given she just had her saddle fall up onto her neck. And I do mean onto her neck. I was also extra unnerved. Having my tack fail me like that really left me not trusting it.

So with our powers of mistrust combined, we were obviously even better than before. 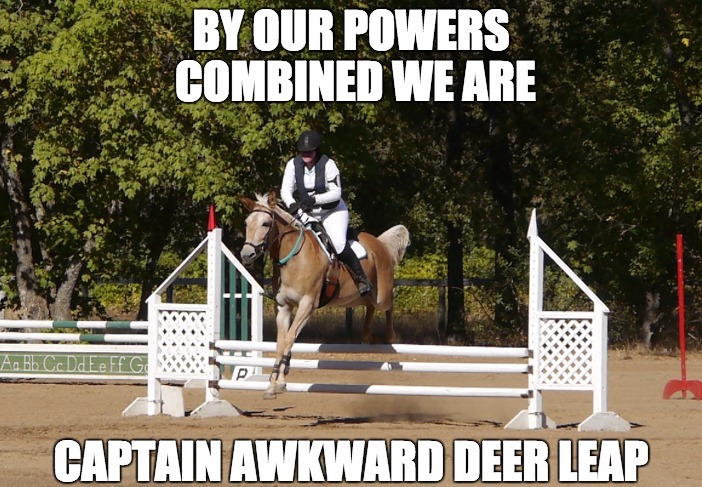 I’m not sure we’re as bad at jumping as we are at dressage, but it’s a close competition. Nilla has also decided that she’d like to be a disney character. This one in particular:

Shockingly – shockingly, I say – we were clear. I think I got 4 time faults because I had to trot a few times to get her settled. But that still moved us up to second place. Of course none of it mattered because we were not going to make it through cross country. My mantra following walking the course was “I’m gonna die.” And my husband’s mantra was “you’ll be fine” and also “why did you want to take up eventing if you’re so terrified of the jumps?” Good question, husband, good question. 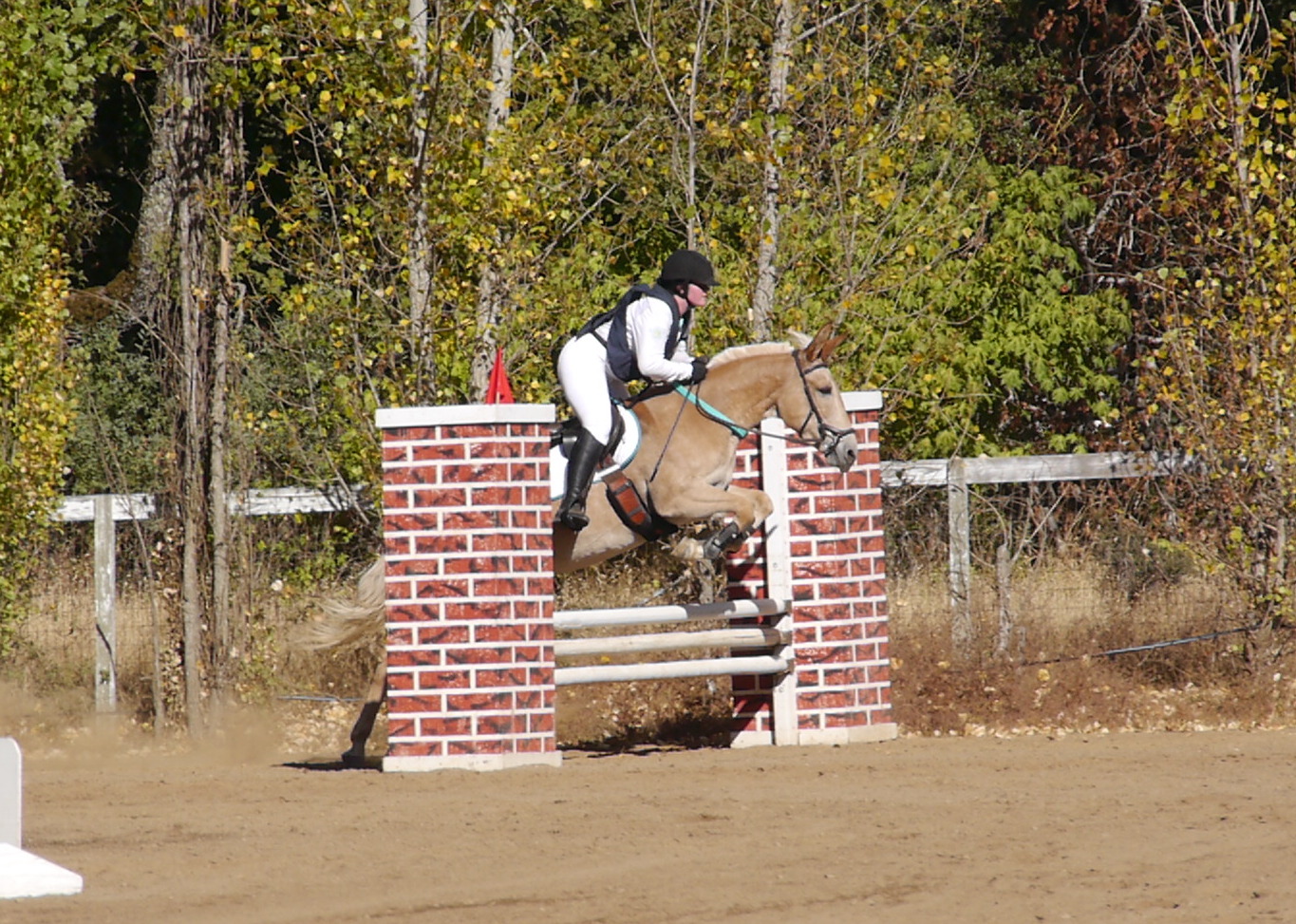