My husband has been wanting to do a real, rated event for a while now. I was supportive, but concerned that they were not going to do very well and didn’t want him to get upset. But he set a very reasonable goal of completing with a number and not a letter and I figured that was certainly achievable.

They’ve been working hard and making a lot of progress in dressage, although I don’t think this will ever be Eugene’s specialty. Then on Wednesday before the show we had a dressage lesson and Eugene was obviously sore. He was having near panic attacks about being asked to bend right. Just what you need right before a big show – an inability to bend right. We put in a call to our chiropractor who was unfortunately on vacation and reached out to some others in the area, but the earlier we could get someone was Sunday, which was kind of after the fact.

We hauled in Thursday and got Eugene set up in his stall.  We’ve never been to such a huge show and omg was it crowded. And busy. And very poorly managed. Some moron drove her trailer the wrong way down the lane next to our stable block and blocked us and the trailers behind us in. Then she proceeded to tell me how I should drive around her, which I was not comfortable doing because there was not enough room. She claimed to not be able to fit past my trailer, but somehow it was fine for me to go around hers. The poor volunteer in charge of parking told her she needed to move since she was going the wrong direction, but she refused. All the while, my husband was off riding Eugene, though once he finally returned he wasn’t comfortable trying to go around her either. There’s a reason it’s one way. Finally the volunteer got some help to move equipment from the ends of the stall rows and she drove our truck past the stupid woman. Some of the trailers behind us had to back up and others had to also squeeze by her. God, I hate stupid people. 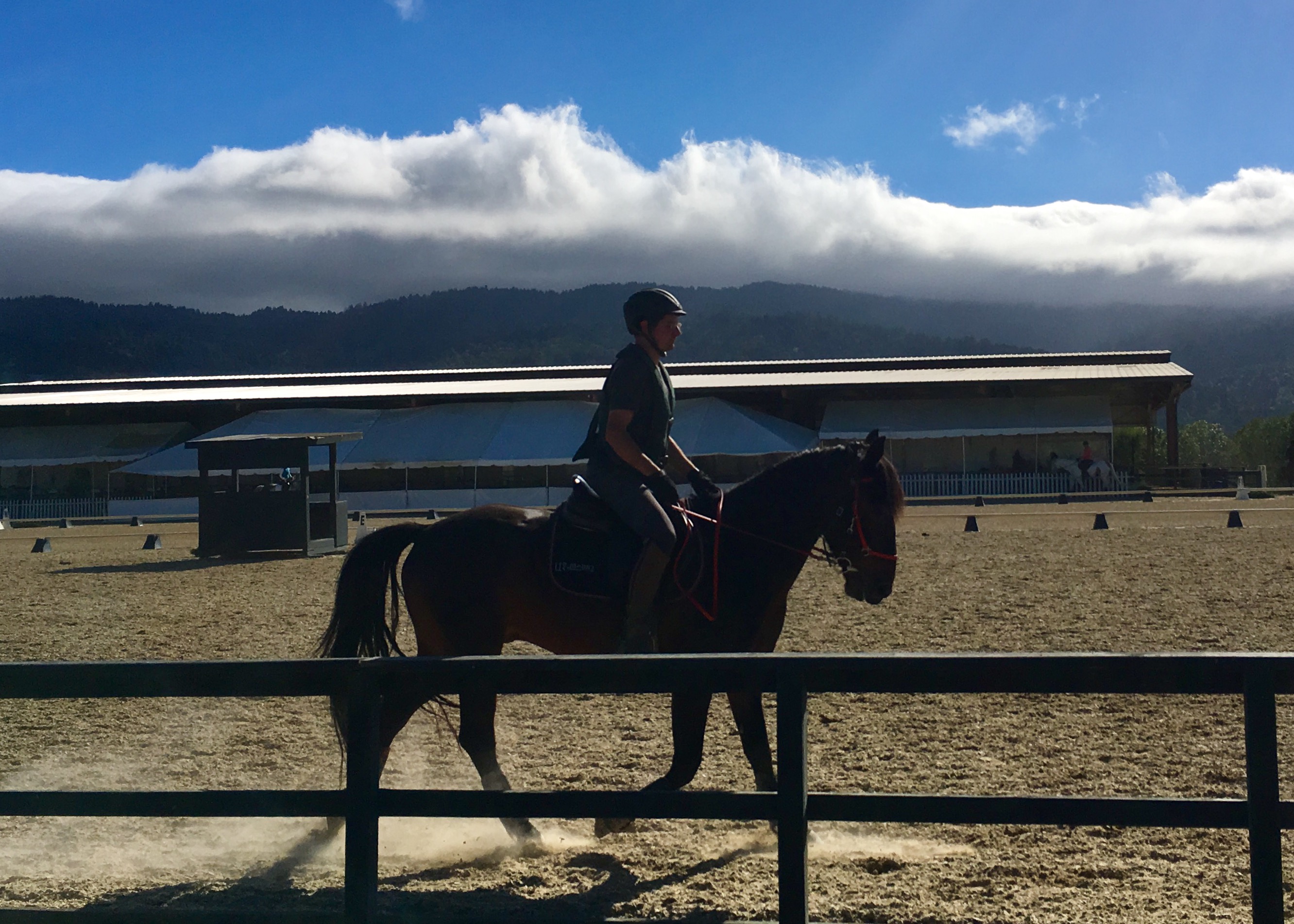 I love watching the clouds roll over the hills

Anyway, they did a brief ride just to expose Eugene to the sights and then he had a bath. The wash stalls had 2 working hoses for 6 wash stalls and like 100+ horses. Everyone was scrambling around and trying to figure out how to bathe their horses without a hose. I went and got our hose from the trailer so we had one, but I did overhear one guy complaining that you’d think $500 would get you a hose. You would think.

The sun was close to setting by now and the wind had come whipping in. Poor Eugene was shivering so we covered him in a cooler and blanket and got him into his stall out of the wind. Then we went and walked the XC course and removed his blanket before heading home for dinner. We came back after dinner to pull his cooler and he was dry and warm in his stall by then.

Friday morning we were back at the horse park bright and early to feed Eugene and then my husband took him for a short ride just to walk around and get some exposure to the craziness. He was being really good about the chaos, but was still stiff. We spent some time braiding Eugene. Despite his bath, his mane was still quite filthy down at the scalp area so I ended up just doing a running braid. Eugene was more interested in playing with the towel than braiding. Typical boy. 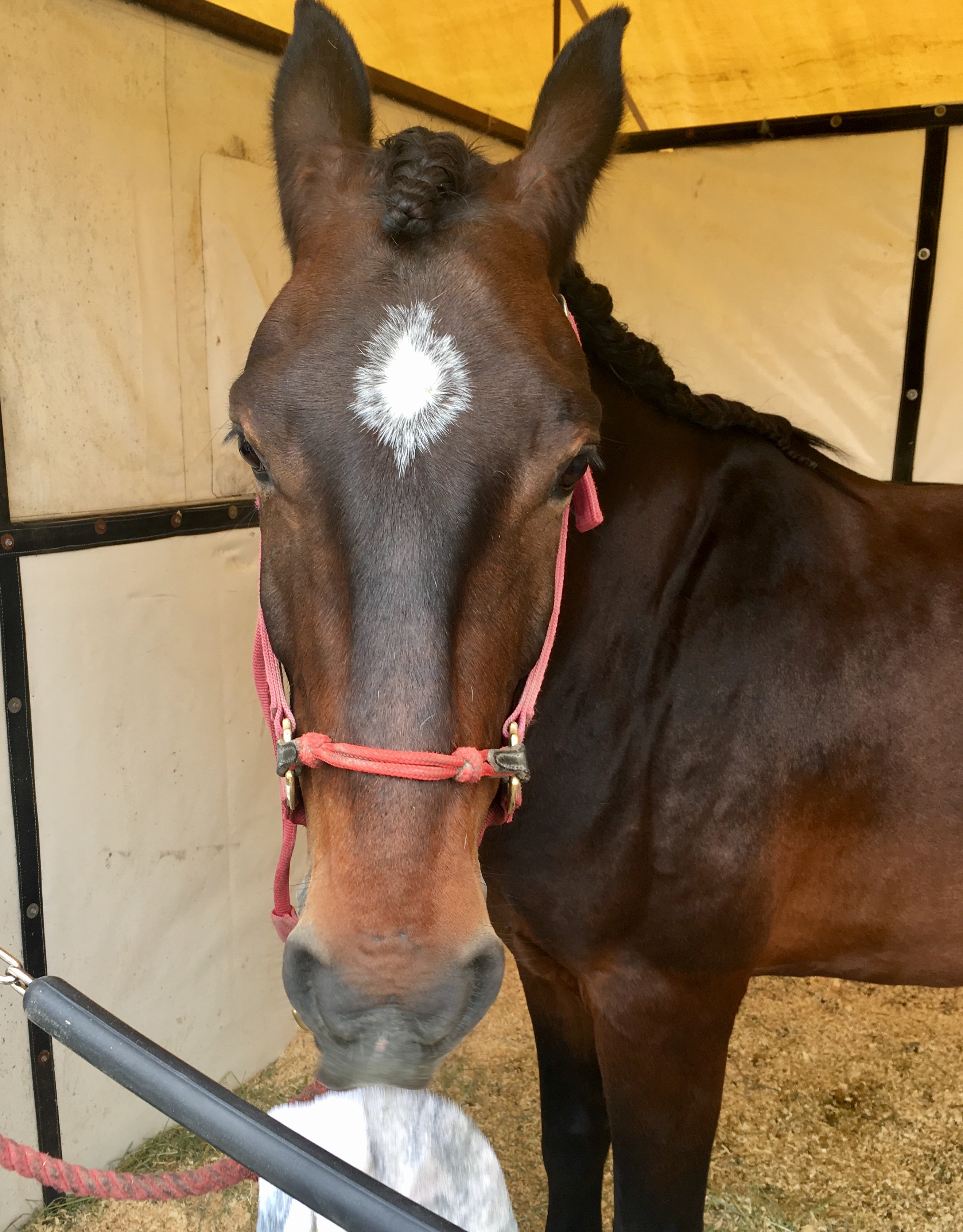 Their dressage time was 3:21 so we had him tacked up and ready to go around 2:30. Sadly, we couldn’t really do much with him given his stiff neck. The plan was basically: don’t ask him to bend, don’t ask him to collect, just try to baby him around the test and get it done. The goal was to not get eliminated; they basically just had to stay in the arena. As they were warming up, I went over to the vendor area to get a drink and discovered there was a chiropractor at the event! Damn, I wish I’d know earlier. I made an appointment with her for that night, but they were still going to have to get through dressage without it.

Then is was time to go in. If you follow me on Instagram, you already know this test did not go well. Giraffe ballet was my description. But given the limitations of not being able to ask for bend or collection, it was probably as good as it could be. 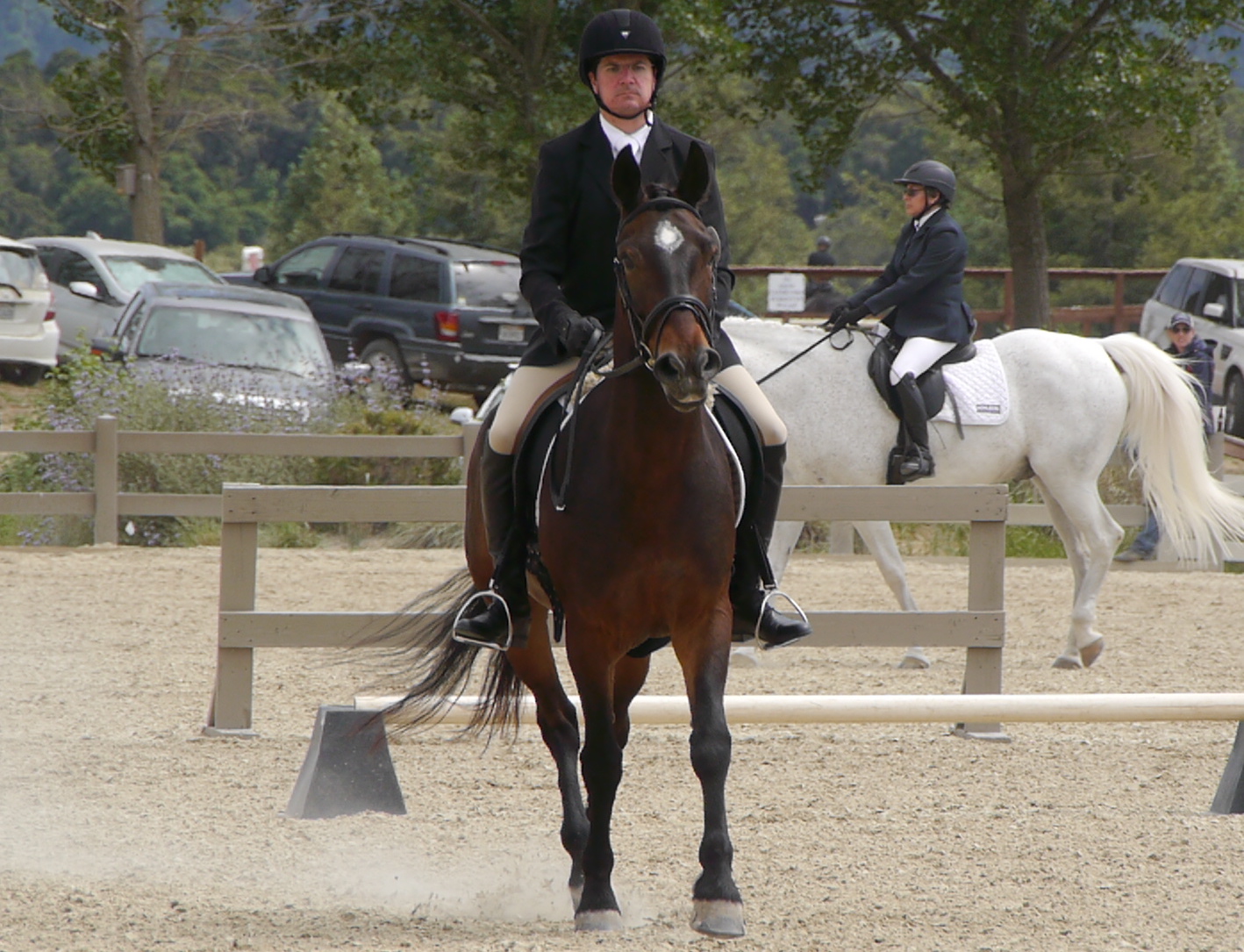 To be fair – all four legs are below the bit. I think that should count for something. 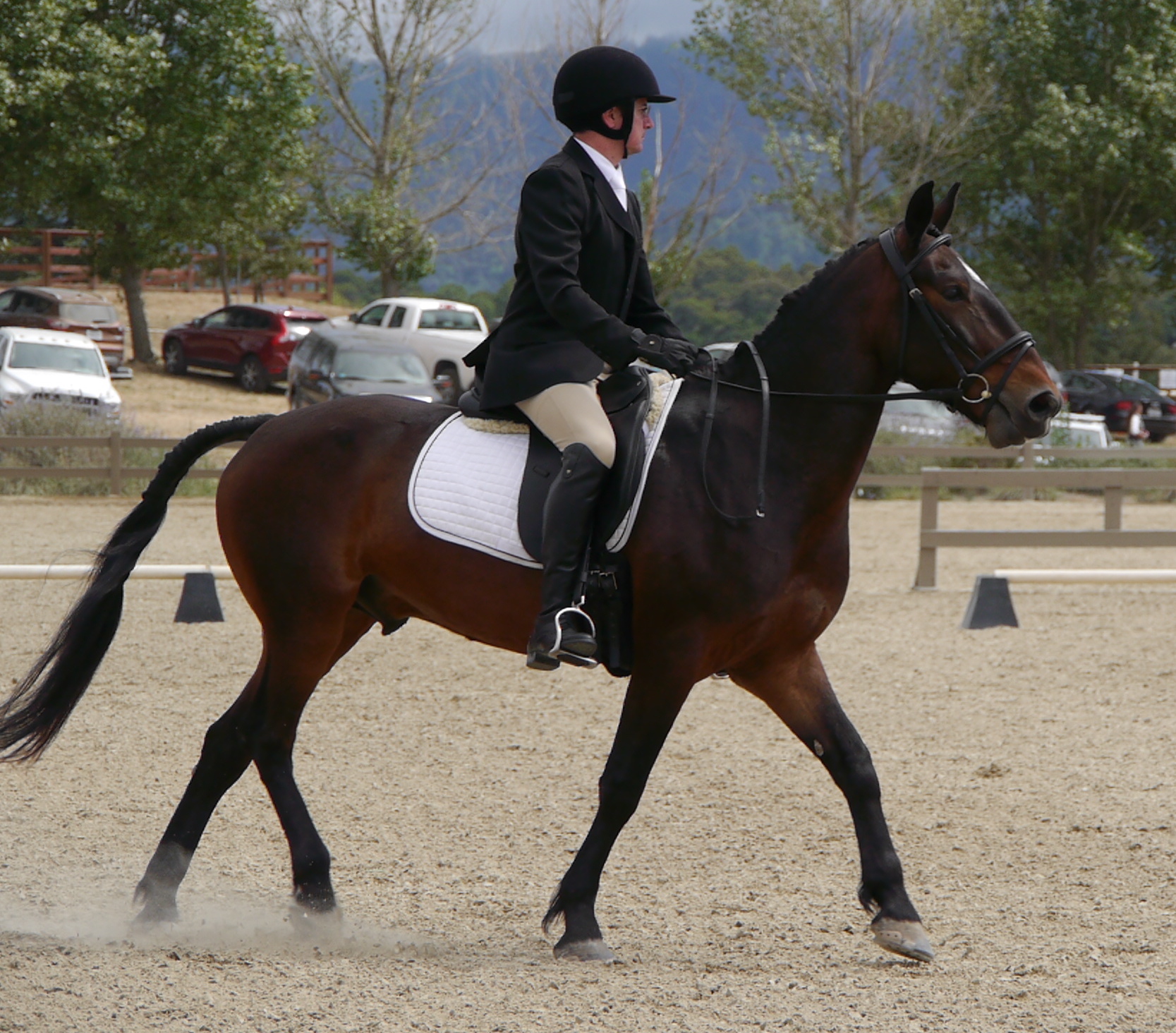 Think Giraffe. Be the Giraffe.

3. Between K and A Working canter left lead.
Judge’s comment: “above and against bit”
Points: 5 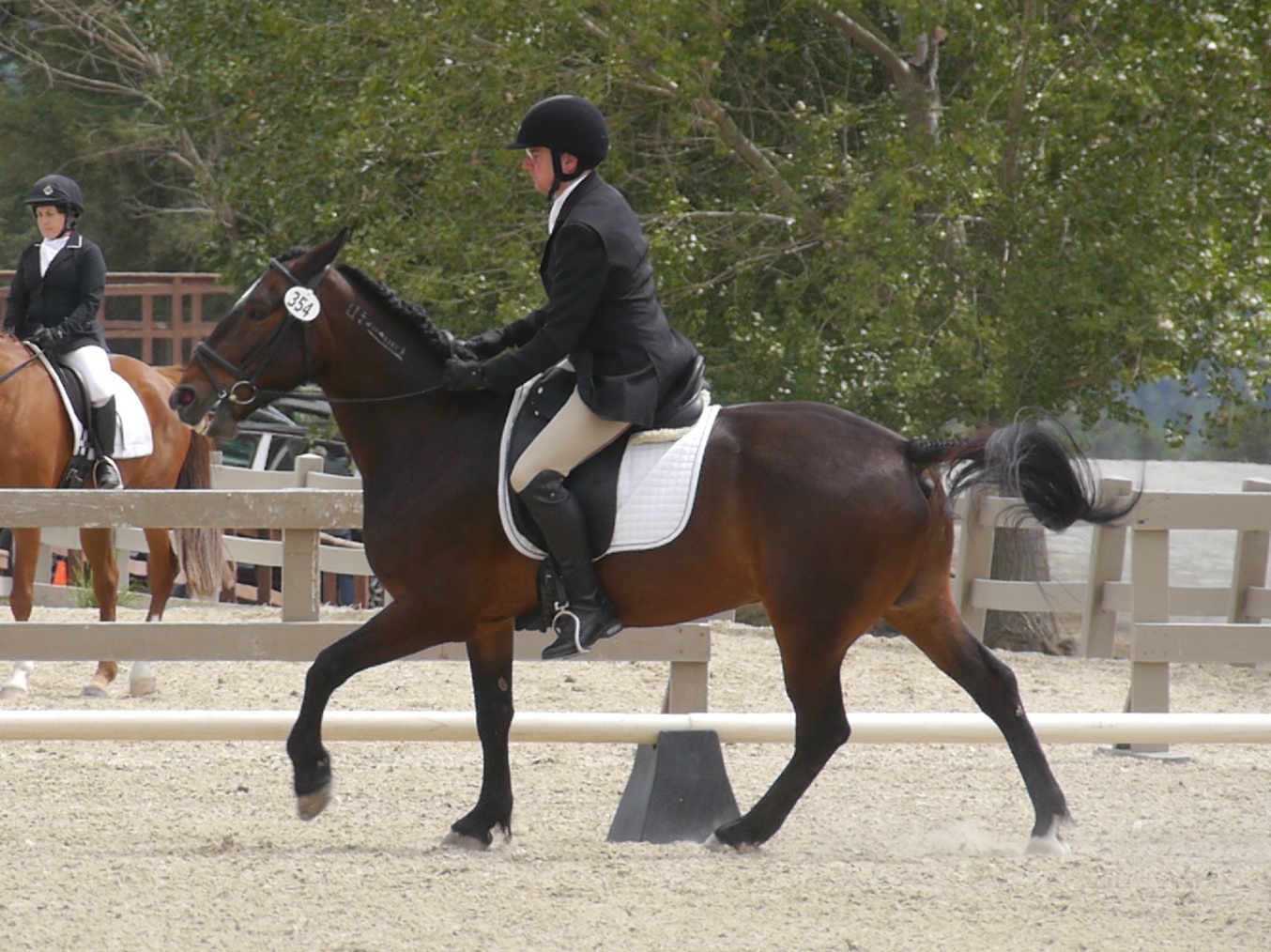 No points for tail sass?

4. A Circle left 20 meters working canter.
Judge’s comment: “above and against bit. loss of balance and rhythm”
Points: 4.0 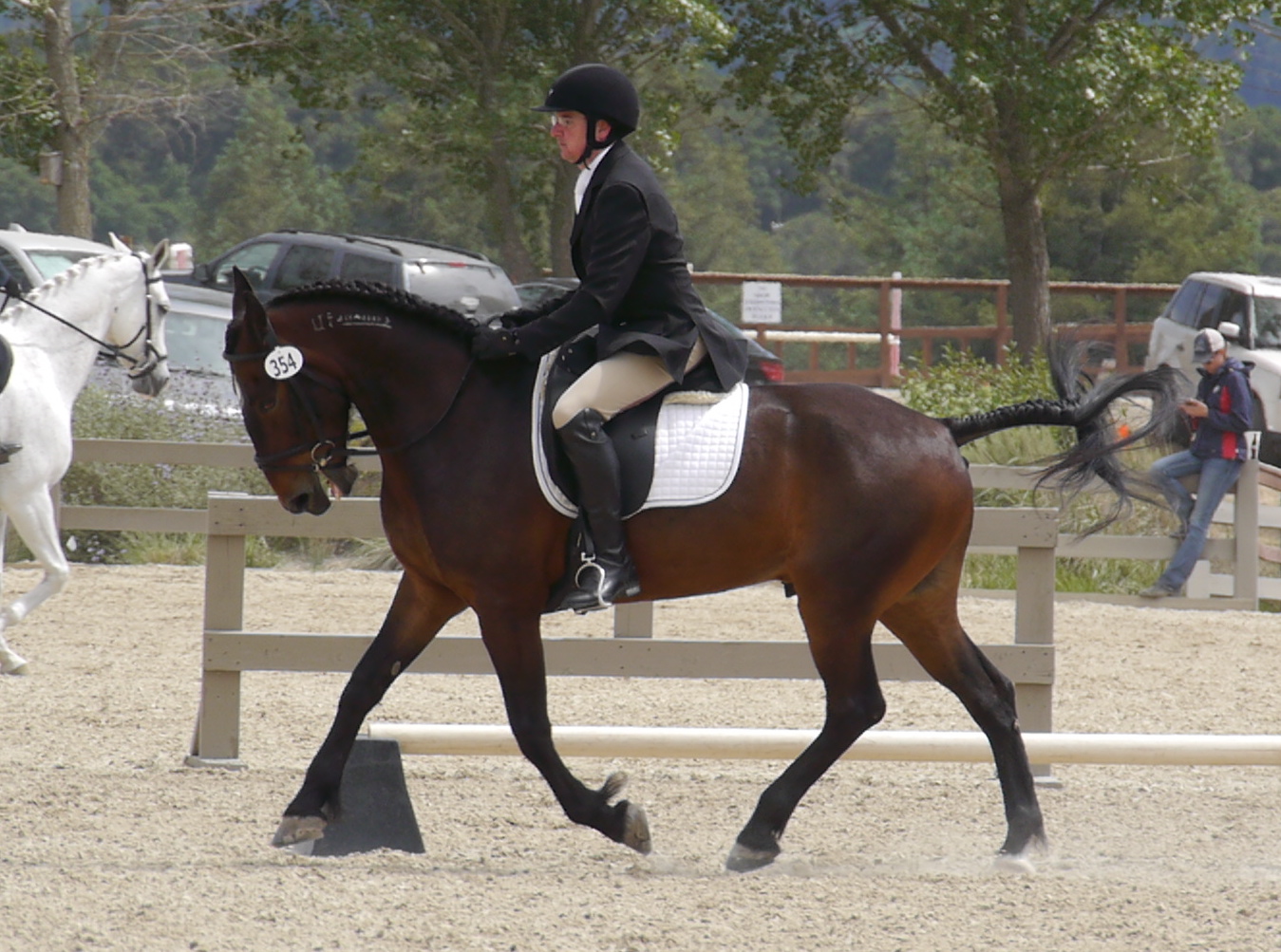 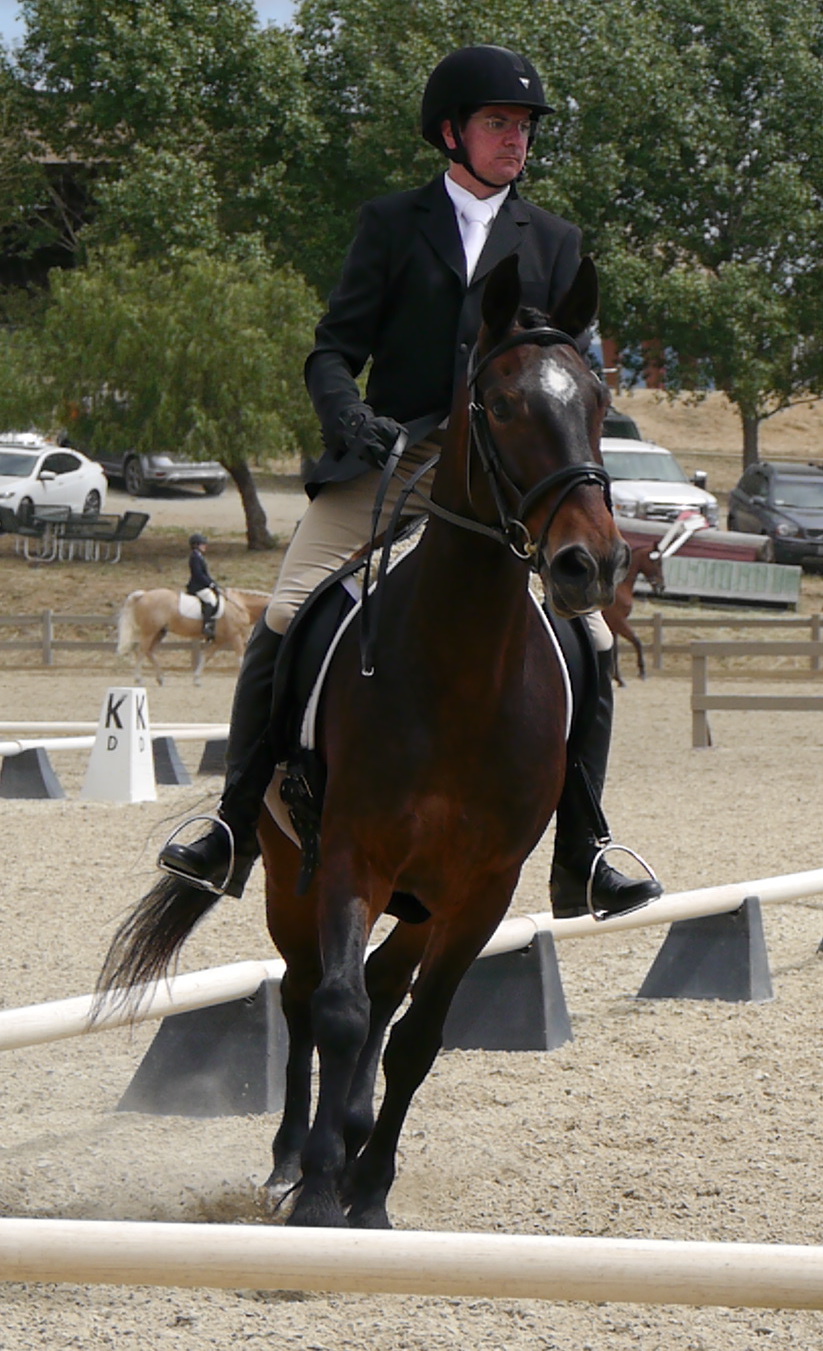 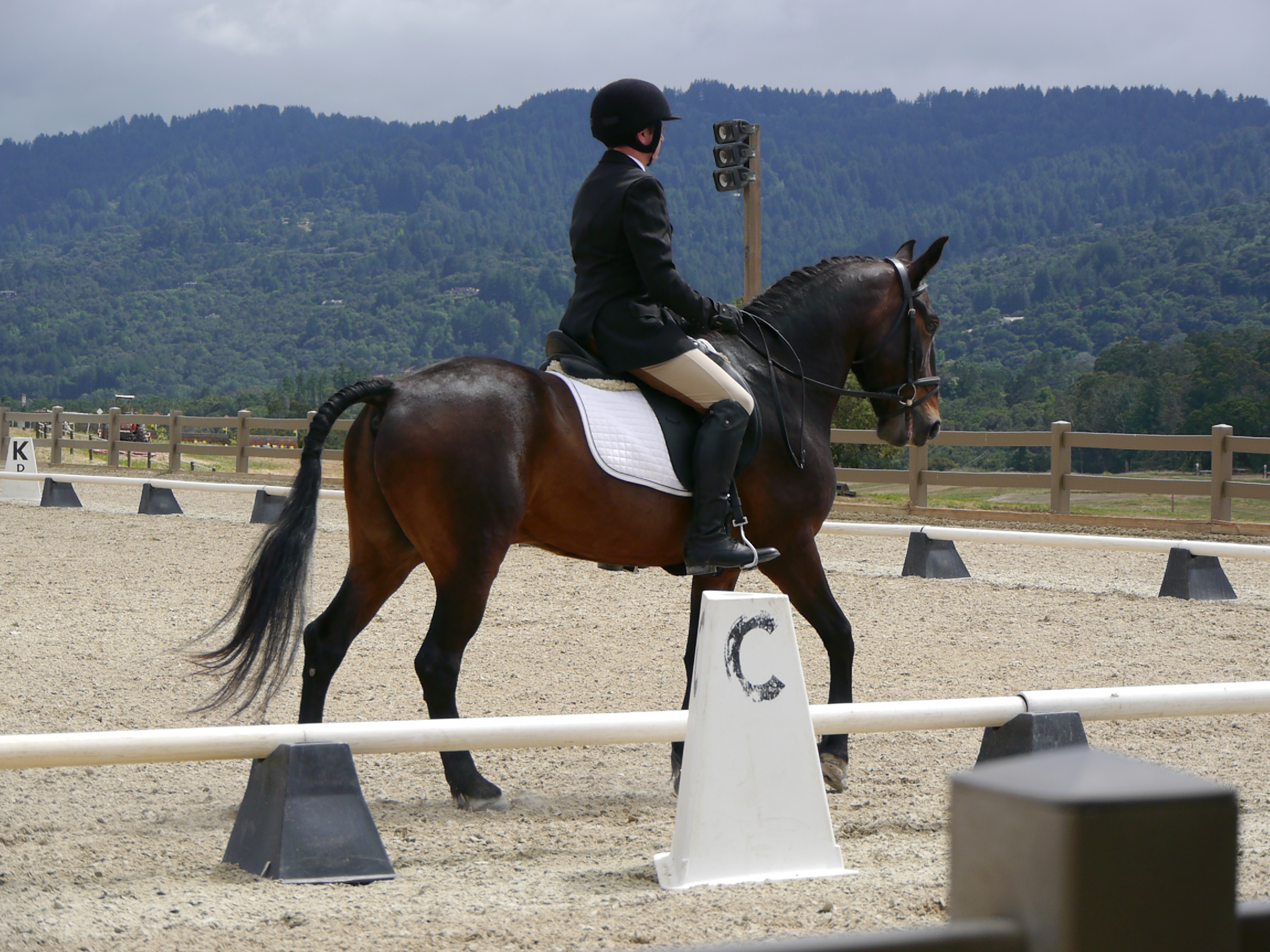 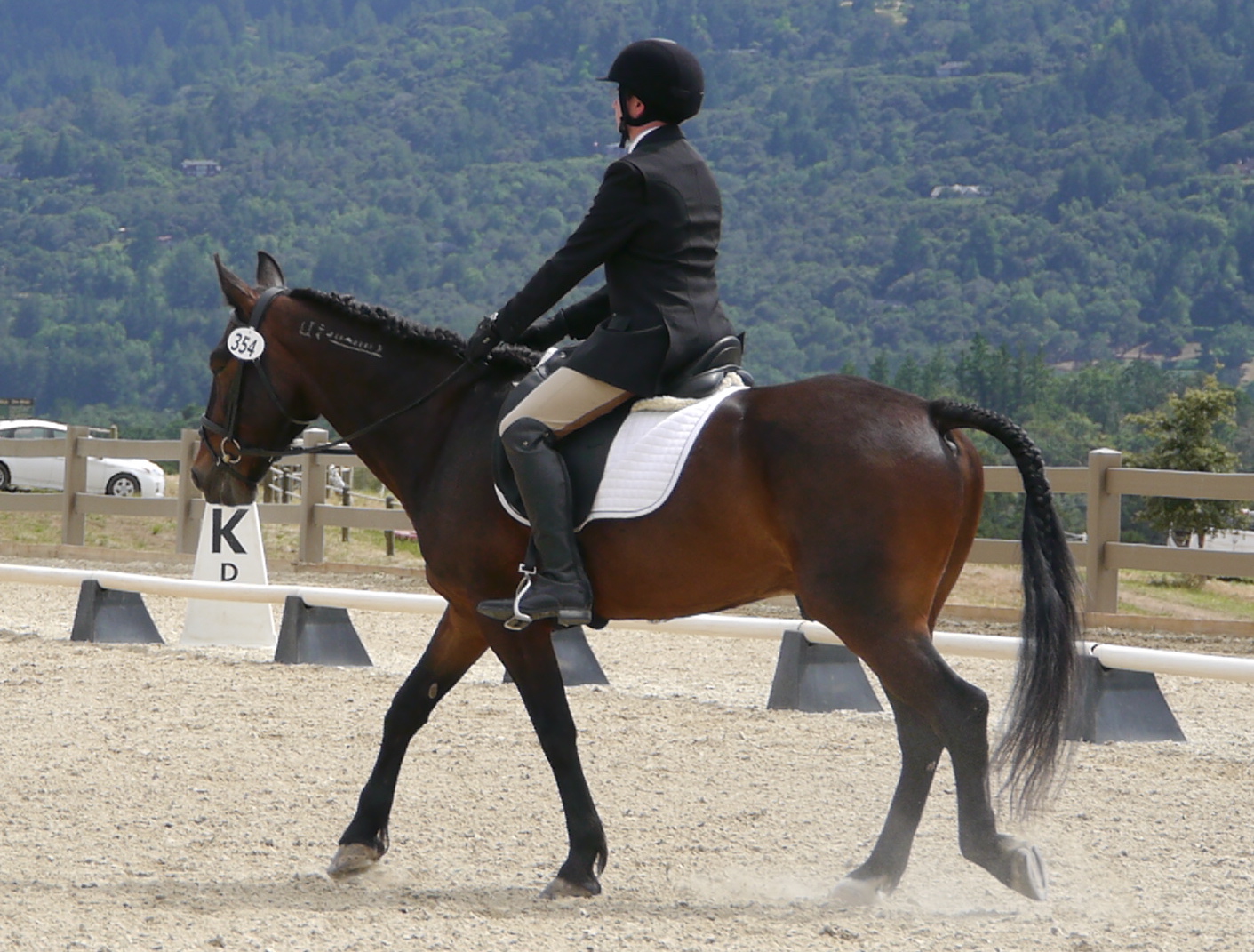 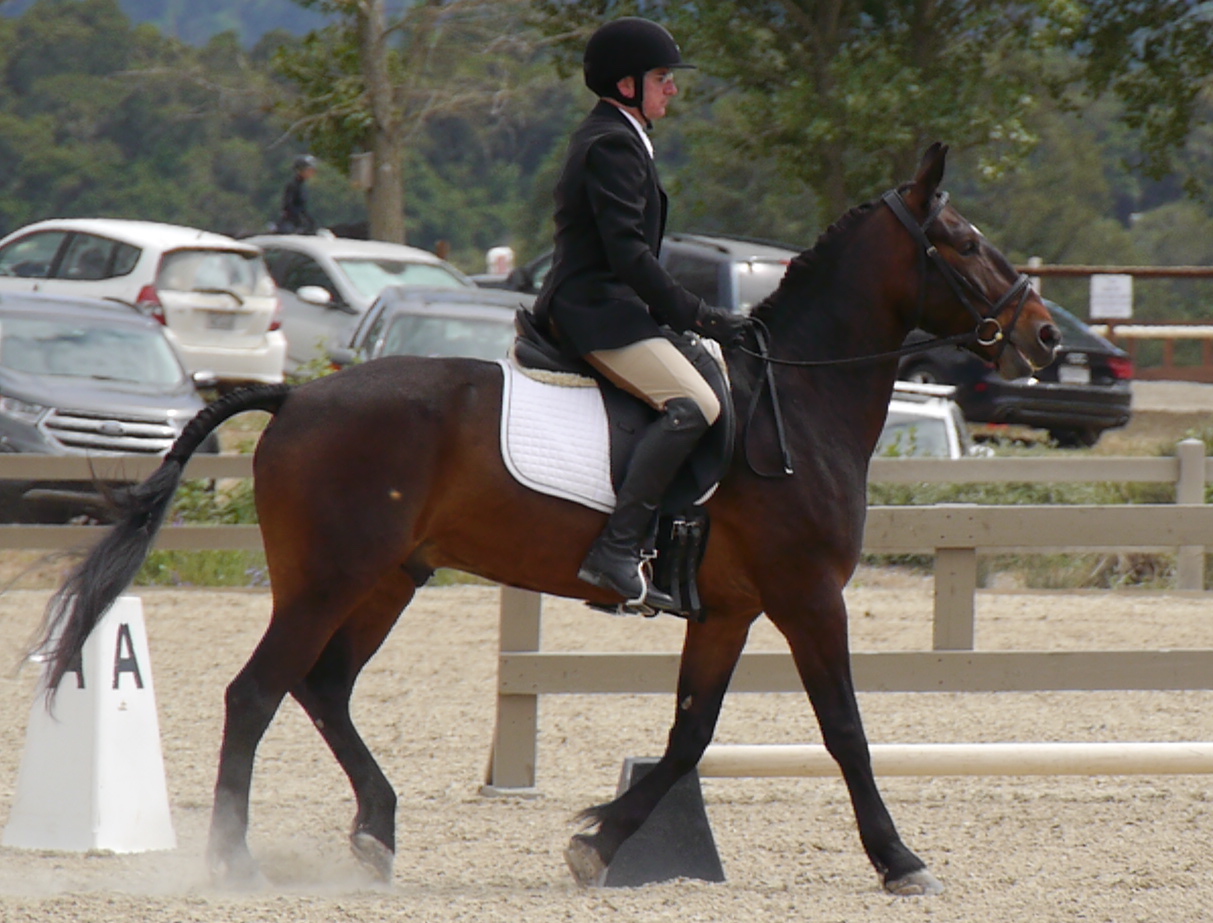 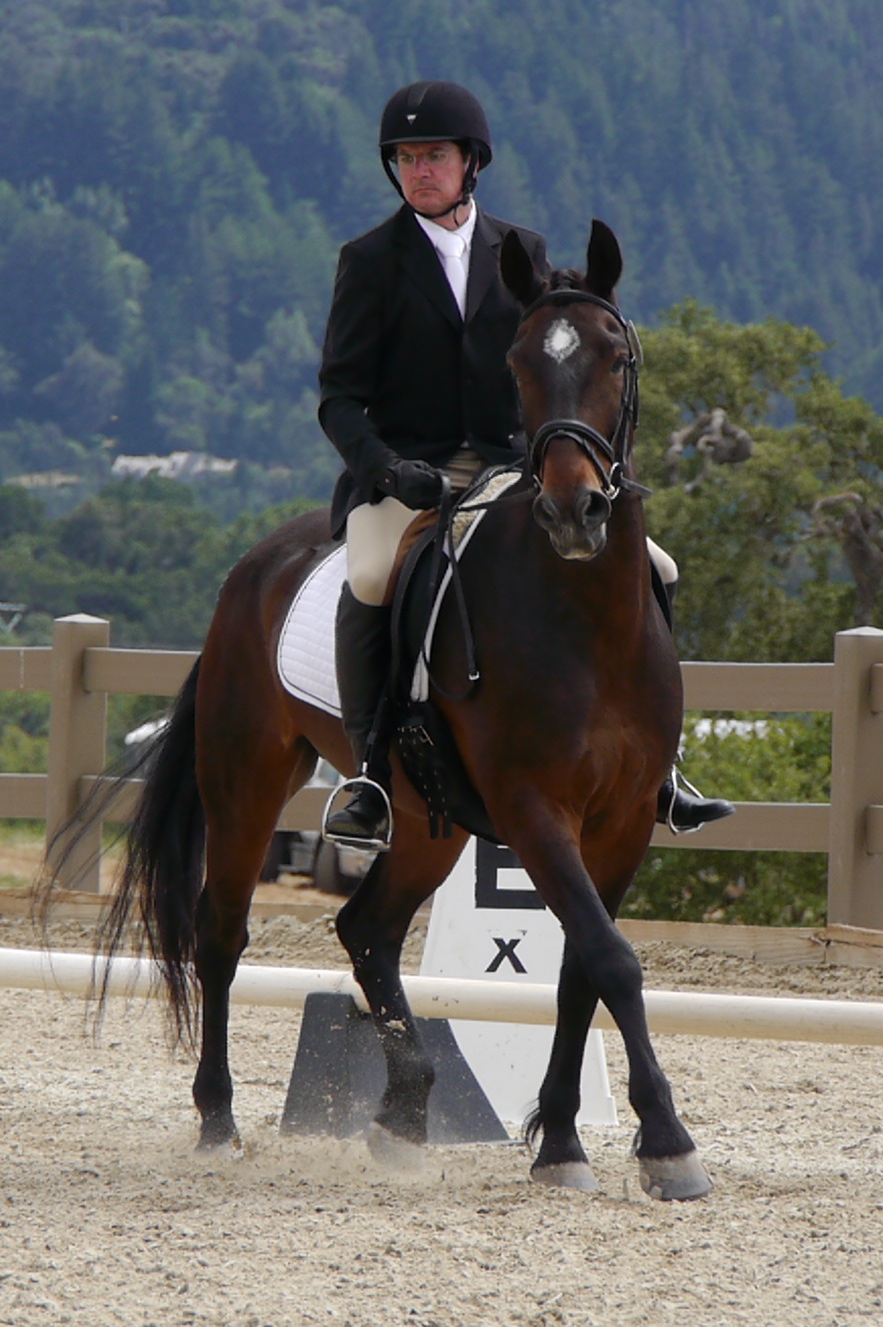 This circle wasn’t good, but it was honestly better than the other movements. 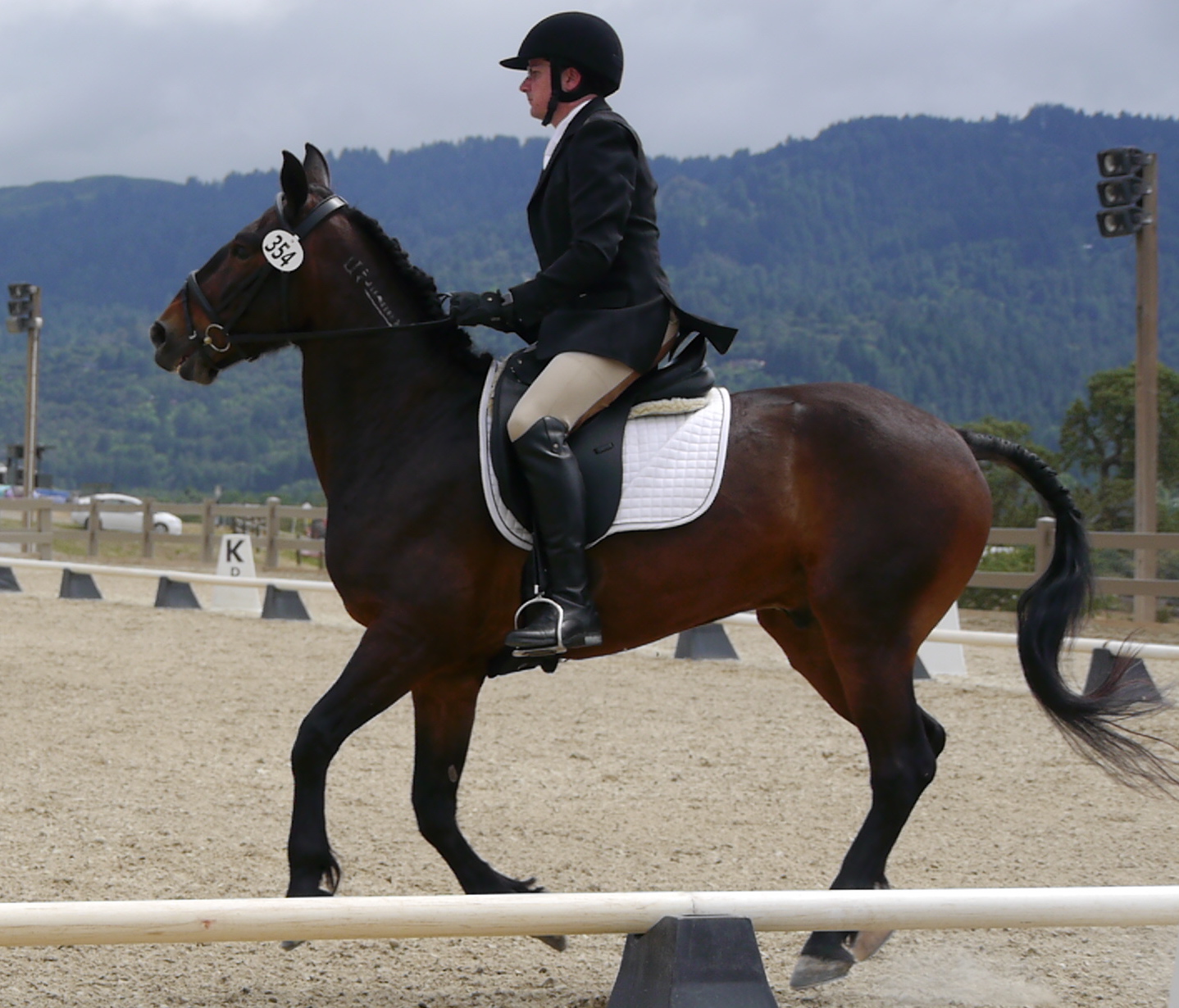 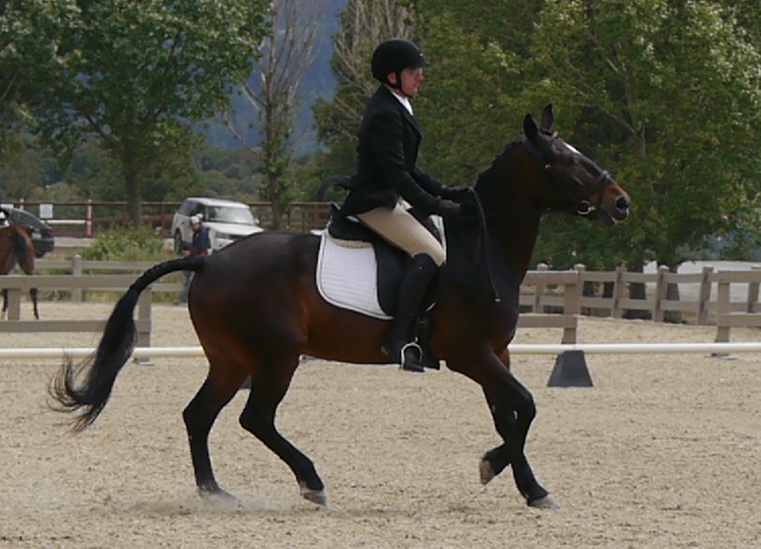 12. Between M and B Working Trot
Judge’s comment: “needs connection. above bit”
Points: 5 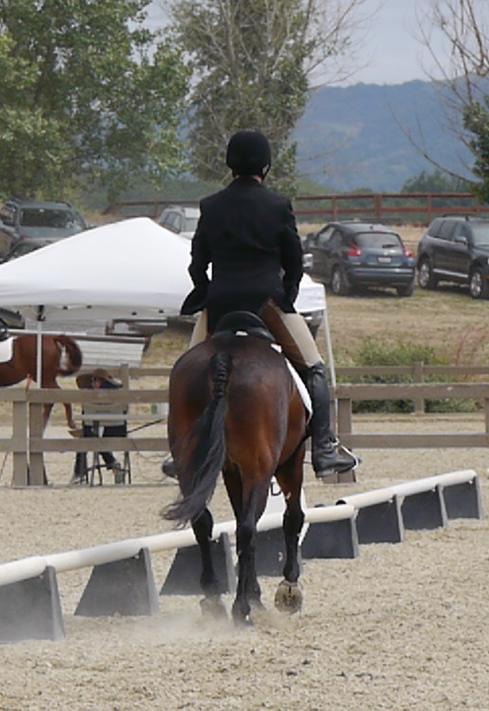 I missed a picture of the actual transition because I thought it was after B like in BN B. It’s a good thing one of us knew the test. 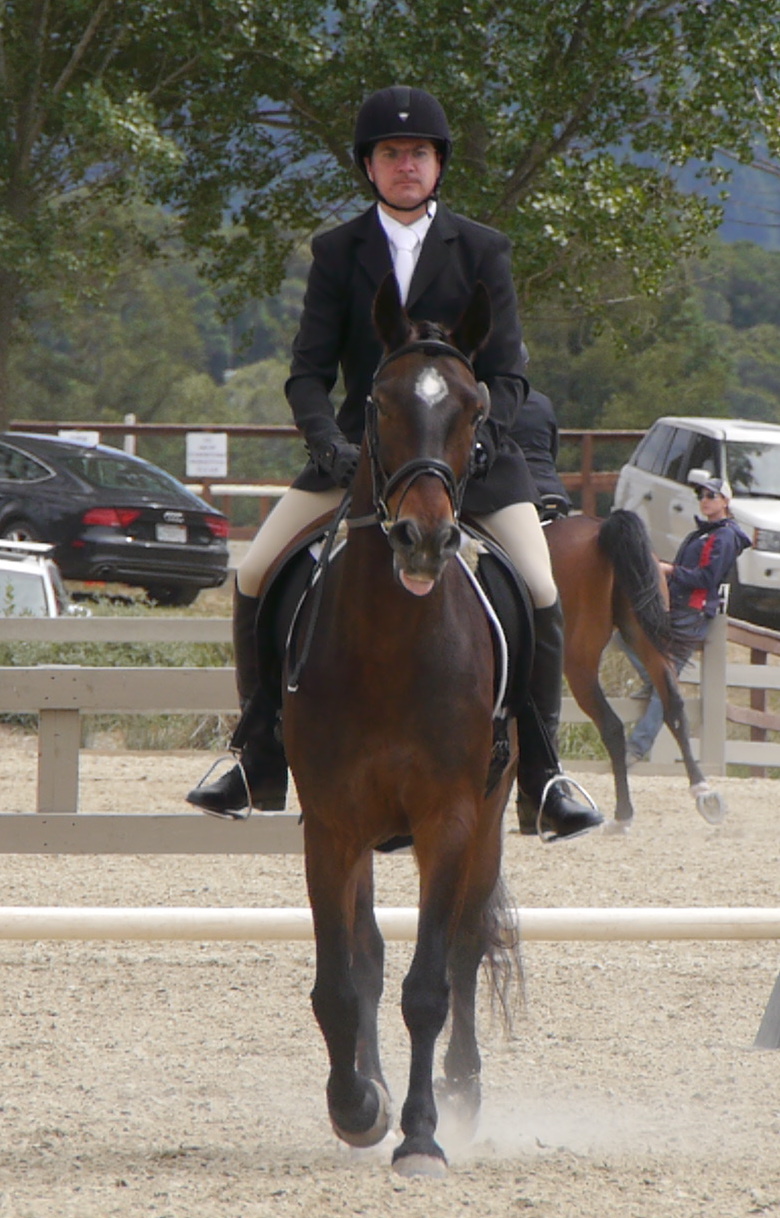 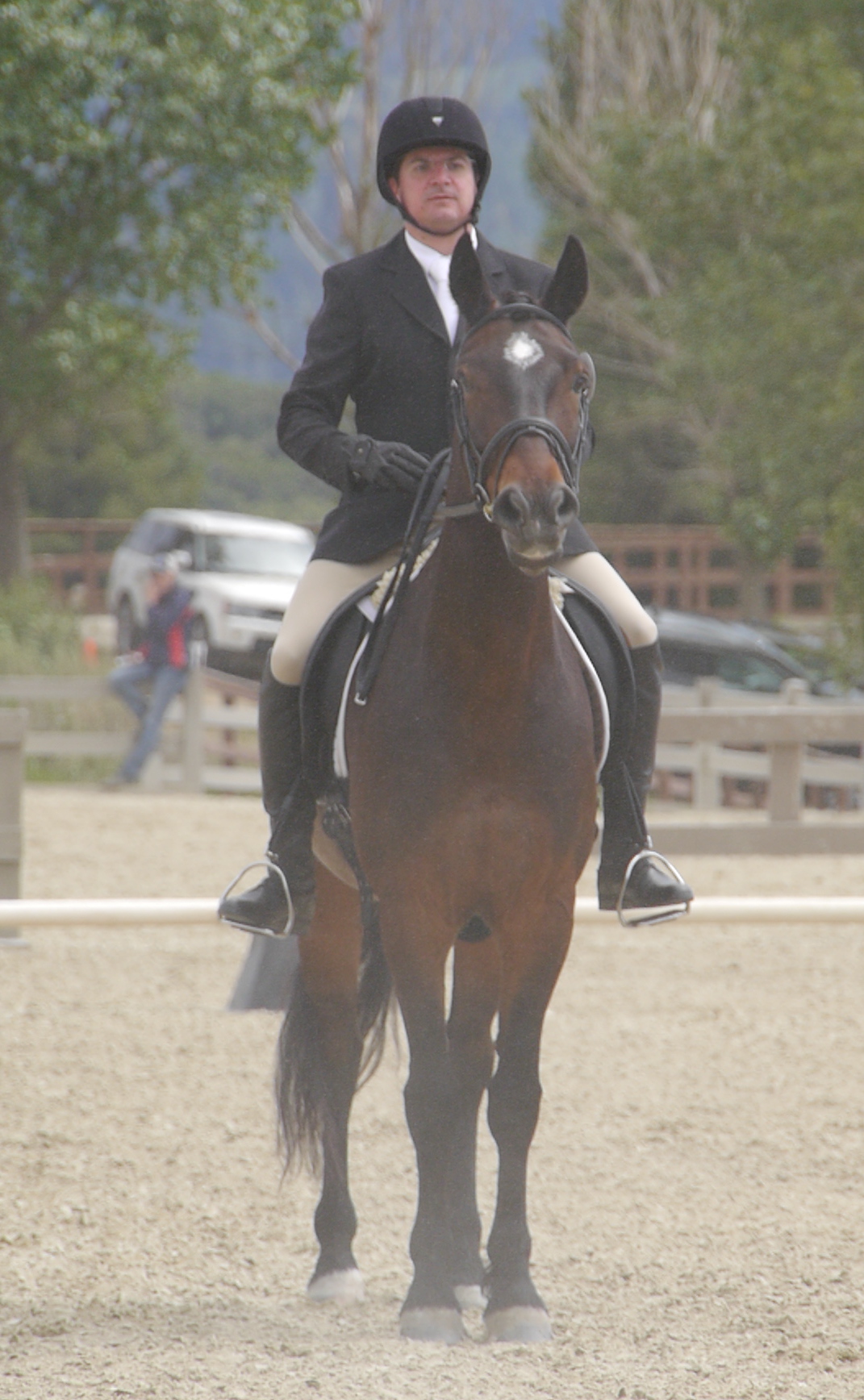 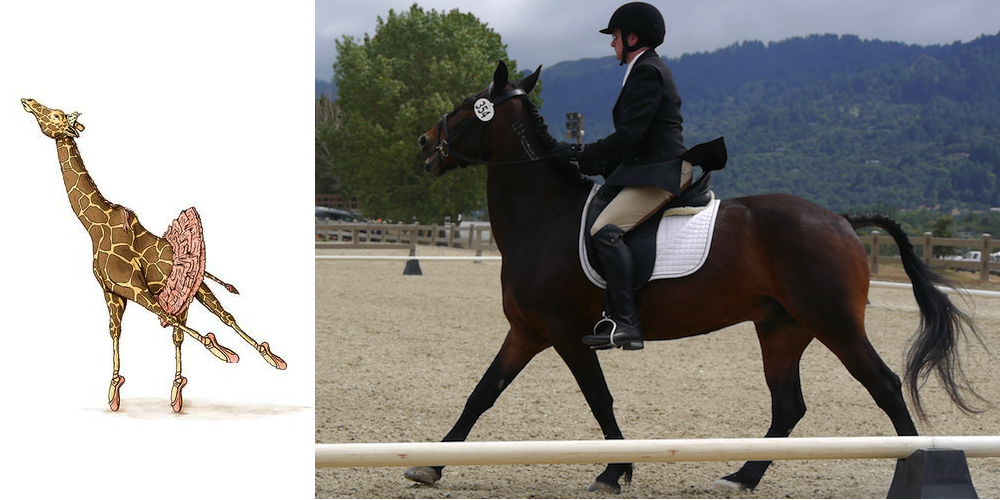 I told you it was bad. To be fair, I actually don’t think this was a fair score. I’m not saying they were brilliant, but this really wasn’t that bad of a test. The judge was pretty harsh. The lowest score this judge gave in this division was a 33.2. In the other BN division she judged the scores were  34.5-47.6. The other BN divisions with different judges had much lower score ranges. Oh well, it was what it was. Because the scoring was so harsh, they weren’t that far from the rider above them.

Eugene got a visit from the chiropractor later that evening and she even came by the next day to check on him again after his Bemer treatment. I still don’t understand what the Bemer thing is claiming to do, but it was free and the Chiro recommended it. I will say that Eugene loved it. The girl put it on and he almost instantly fell asleep. Droopy twitching lip and all. I only wish we’d gotten all of that done before dressage.

16 thoughts on “The Spring Event At Woodside – Dressage”