While Levi and I had fun, the point of going to this show was to get Eugene some practice. He still gets nervous at shows and the only way he’s going to get better is drugs or exposure. And since we don’t do drugs, it’s all about the repetition.

Their first class was English Pleasure warm up. There were only two in the class and the other horse was a gorgeous and well trained horse who liked like he belonged at a dressage show. I talked to his owner later and apparently that is what he used to do, but he started getting too excited and blowing up at shows so they’re doing the same thing as us and just exposing him to lots of schooling shows. Given how great that horse looked I was shocked when my husband got called for first. My husband was shocked too. He got a prize in addition to the ribbon. They actually had bins you could pick your 1st place prize from. We ended up collecting a bunch. 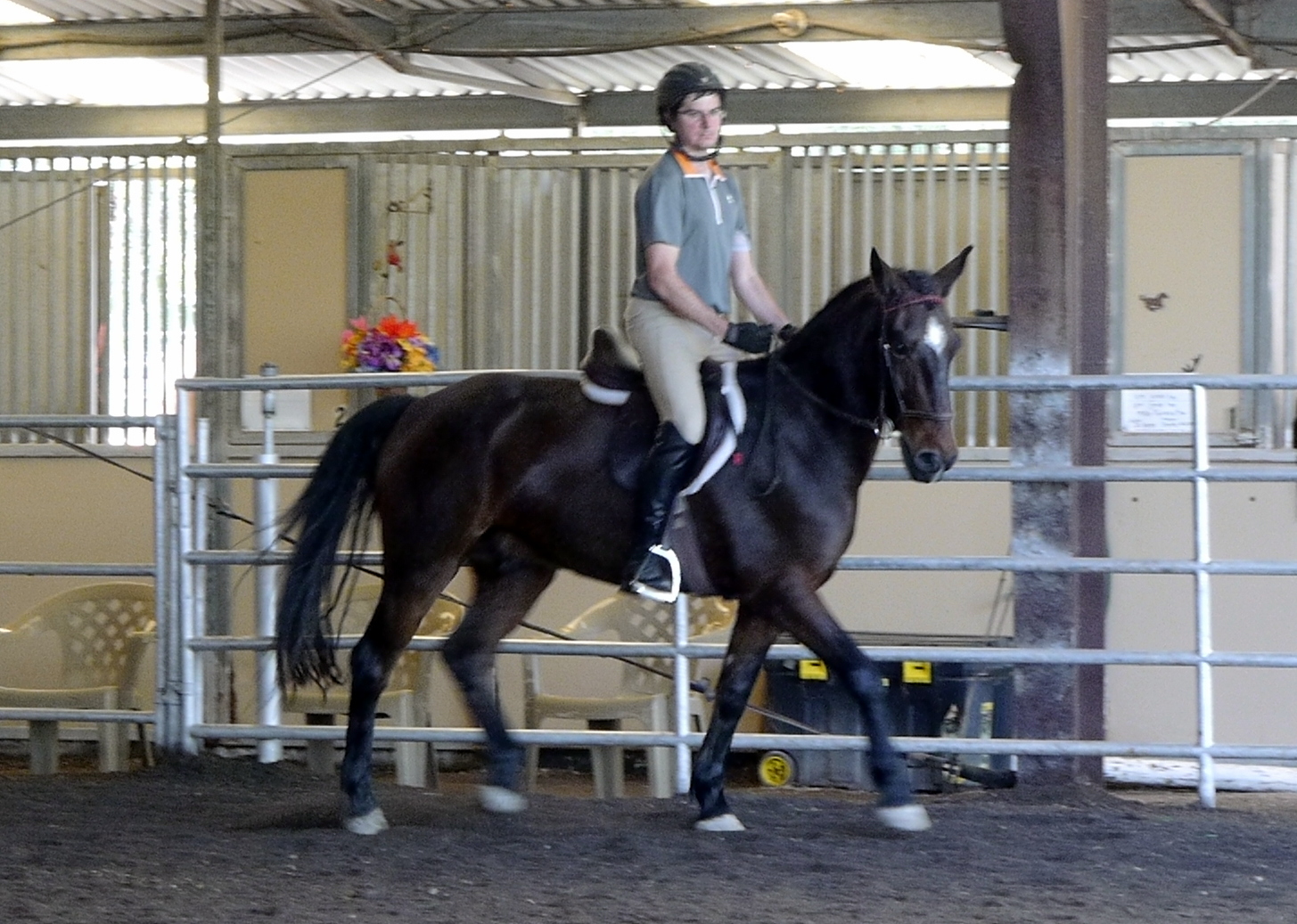 The arena was too dark for good photos

Their next class was Hunt Seat Equitation also out of 2 and they won again. We were once again surprised, but whatever, we were there for exposure, not winning. I’m certainly not going to complain about ribbons though I felt bad for the other adult who looked really good. Since we were there for exposure, I told my husband to enter Dressage Suitability Open. This class had some kids entered in it so there were four entries. They got 3rd out of 4. 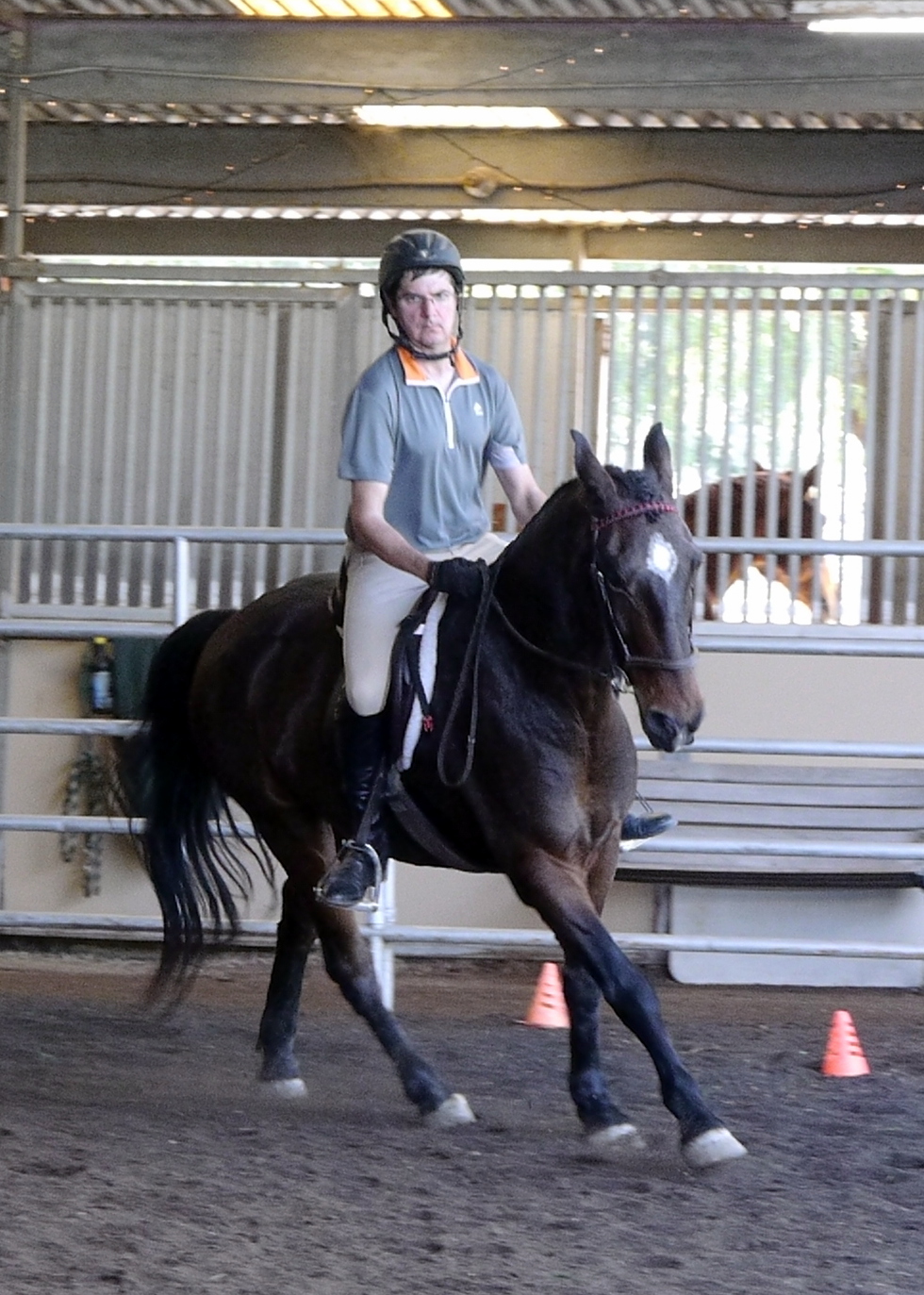 Eugene was being a PITA about cantering. We’ve never really schooled walk to canter and he wasn’t even wanting to canter from trot. So I told my husband to go back out to the warm up arena and get after him. They came back for their final flat class – Hunter Under Saddle – and the show combined the AA and under 17 so there were four entries again. Which was great for the whole more exposure to chaos thing. They ran the class simultaneously, but ribboned the classes separately. My husband got 1st out of 2 again. 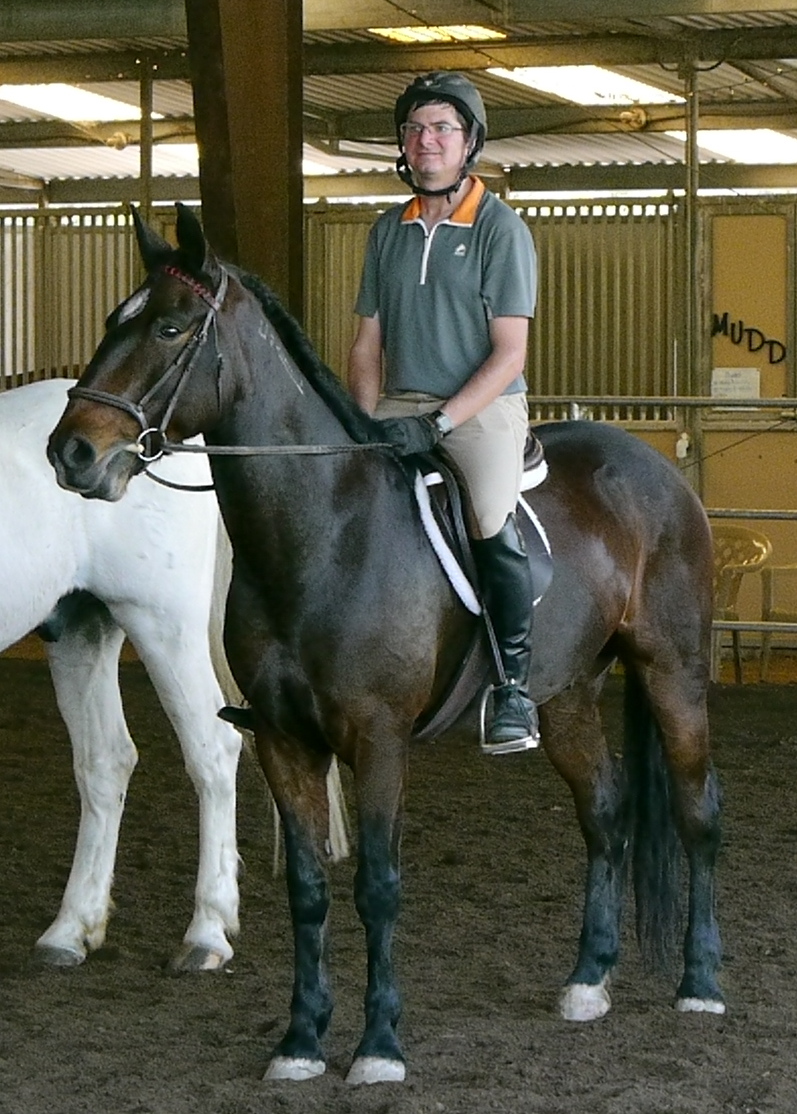 There was a 20 minute break before jumping classes so we took them back to the trailer for a break. I stripped Levi’s tack and ended up leaving him at the trailer. I was worried he might lose his mind as he hates standing still and doesn’t like being left alone either, but he was okay. He dug a bit of a hole, but he didn’t untie himself and escape or injure himself so I’ll count it as a win.

Their first jumper course was Hunter 21″-2′ Jr. & AA. There were 3 entries and they were 3rd to go. The first horse had multiple refusals and the second horse rubbed a few rails, but didn’t knock anything down. My husband and Eugene aced the first 6 jumps, hitting everything in stride, nice and calm, and looking great. Then on the final line, they had a bad stride to the last line. My husband really got used to Shasta who would solve everything in regards to jumping and really preferred that you not mess with her. If anything goes wrong, his instinct is to abandon all contact and leg and just let the horse do the jump themselves. Of course, Eugene doesn’t know how to jump and is just bewildered by such behavior. They didn’t actually knock either jump down, but it wasn’t pretty. They got 2nd out of 3. 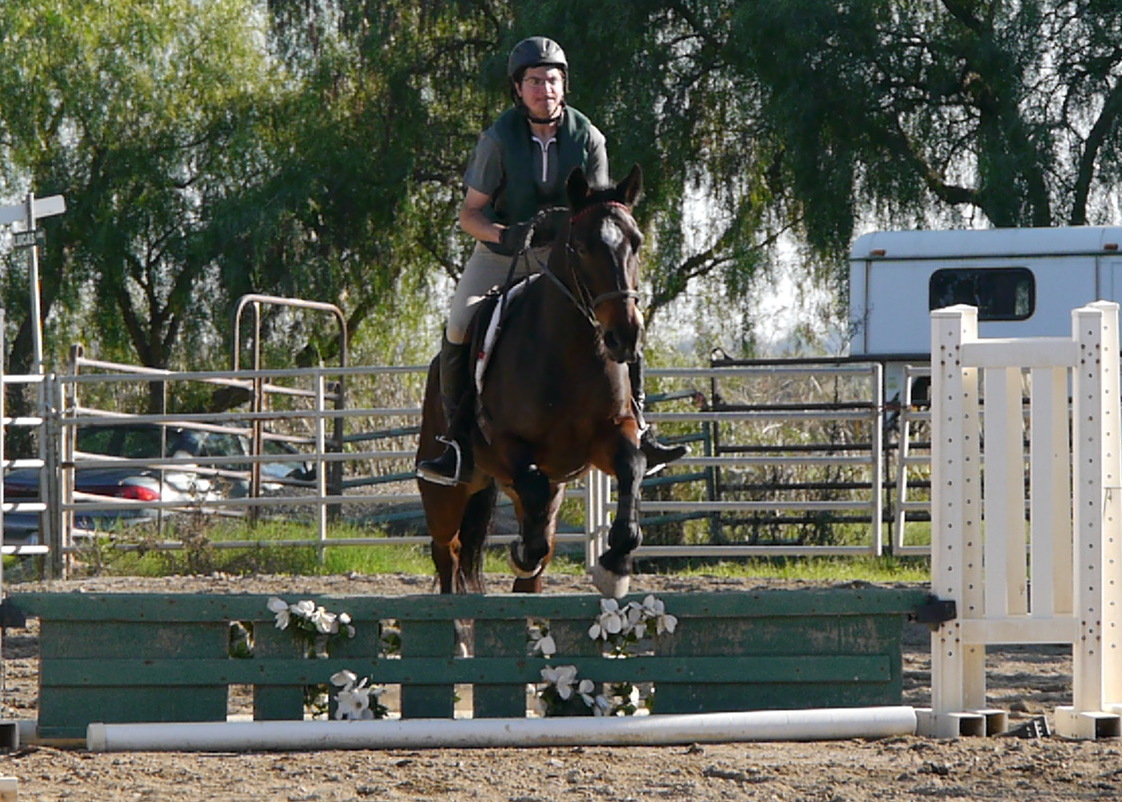 Next up was Argentine Jumpers 2′. The course was cool – very twisty – and the goal time was 73 seconds. I asked my husband if he wanted his watch but he said no. The ground crew raised a few of the jumps, but I don’t think they were all 2′. The first entry had 71.5 and my husband had 75.4, so they were pretty close. There was a 3rd entry, but she got lost and had to circle around and fix things, which meant another 2nd place ribbon for Eugene.

My husband’s last class was Low Hunters 2′-2’3″ Jr. & AA. The ground crew actually went in and jacked some of the jumps up multiple holes. The extra height combined with Eugene being a bit tired meant they didn’t have the prettiest round. However, they were the only entry. As they entered the arena, the announcer said “no pressure, but if you stay on, you’ll win Adult high point for the day.” 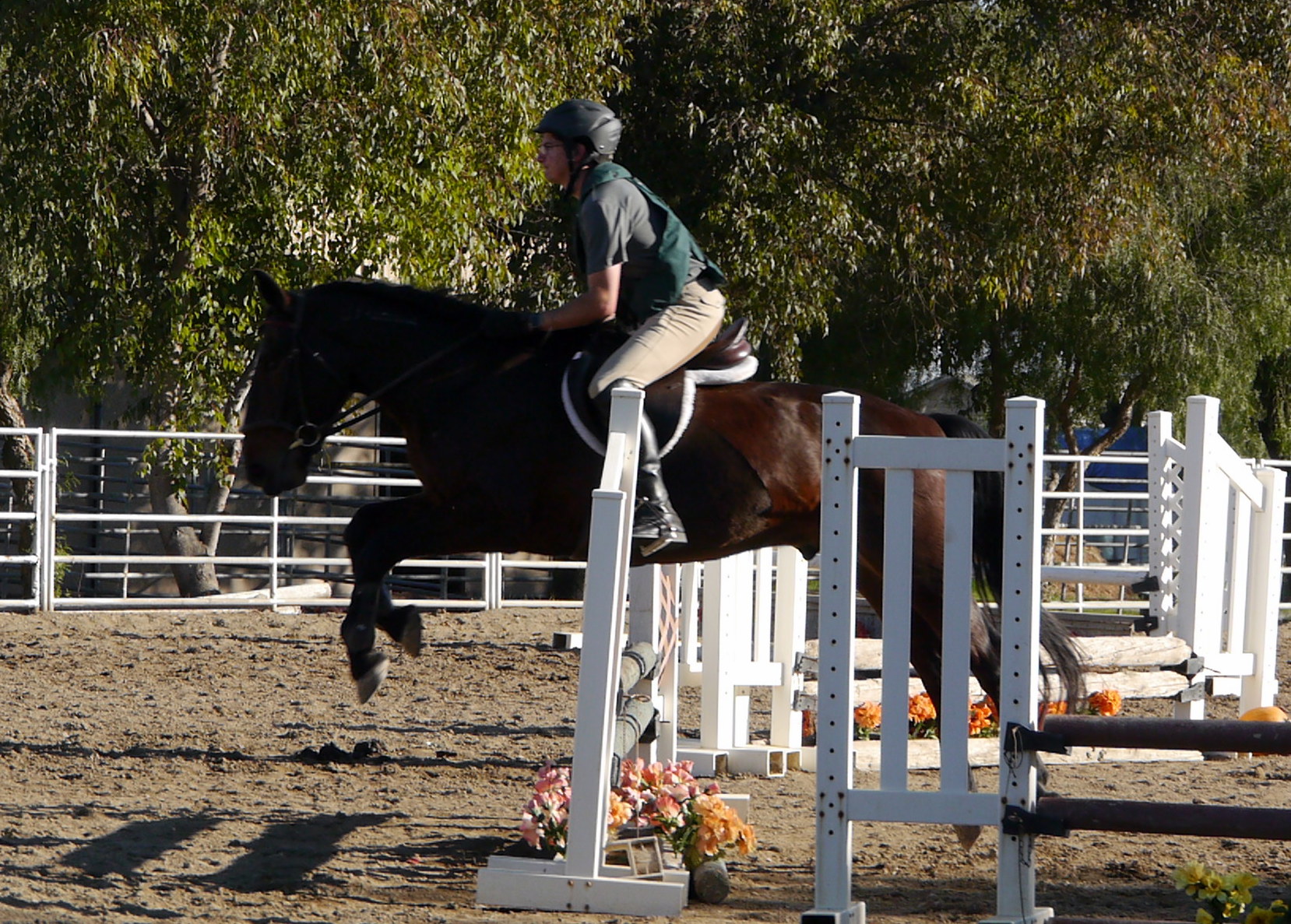 Eugene was a bit lackluster, but he was a good boy and they completed the round still on for a 1st place ribbon and AA High Point champion. The prize was cool too: a really nice jacket with embroidered with the Show Name and High Point Champion. They also got a ton of ribbons. 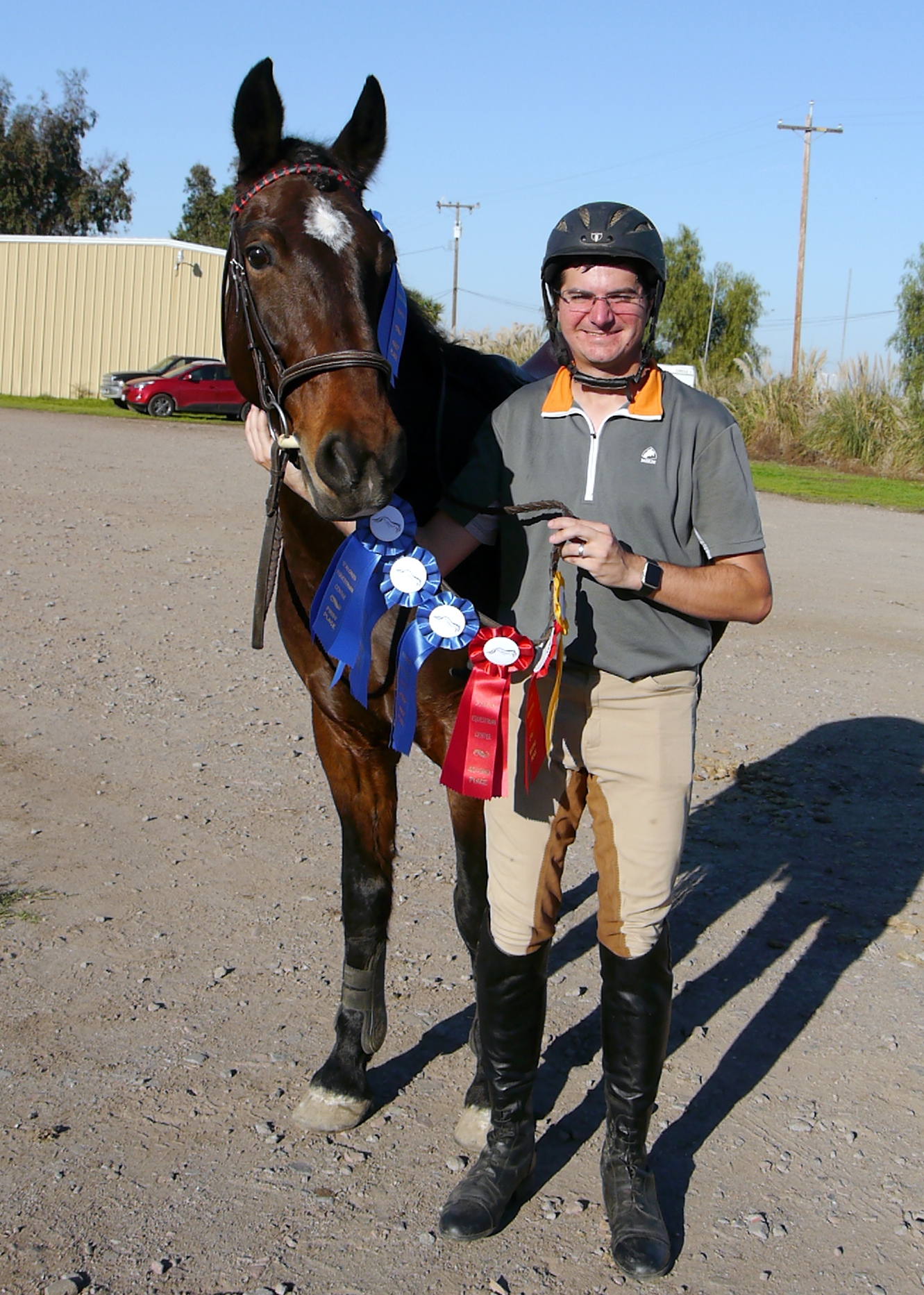 More important than the ribbons, Eugene did really well. He still got tense in his flat classes, but he was better. I think if we do a few more schooling shows, he’ll be much more settled at his next event.