Levi has decided that being lame is more fun than being ridden so he’s useless. On the plus side, that leaves me available to play photographer and to set up fun gymnastics for my husband and Eugene. On Sunday we tried a fun set up with two lines offset lines that allow for doing the straight lines in or slicing a one stride between the lines. 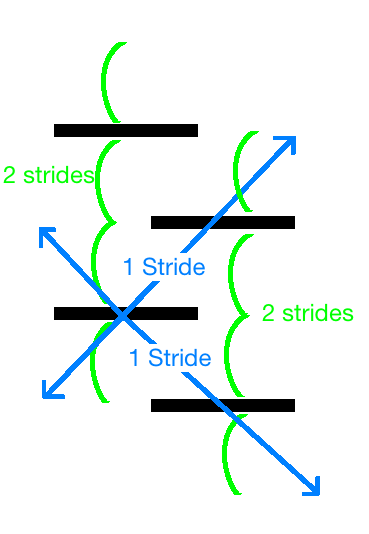 I am so good at graphics

We started with the jumps low because we figured Eugene might struggle with the one stride. However, they also started by doing just the straight lines and Eugene found the height to be unchallenging and basically just cantered over them. 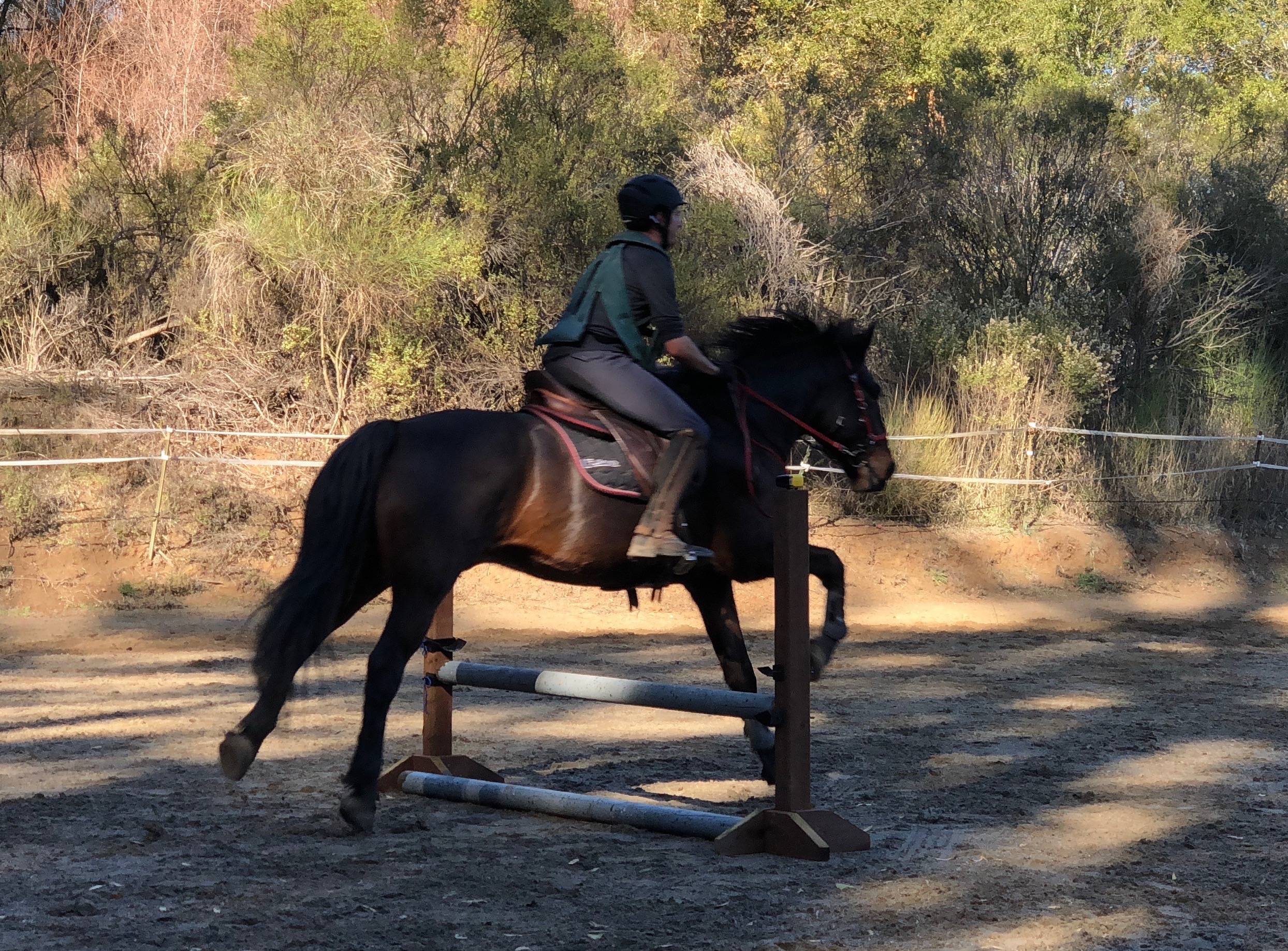 Once we introduced the slice though, he found those same little jumps super challenging. So much so that he didn’t quite know what to do with his feet and decided to just take it as a giant trot pole:

You really have to see it in slo-mo to appreciate just how special this is:

I don’t think this horse knows how to refuse a jump. He might not know what he’s doing, but he will try to please my husband no matter what. 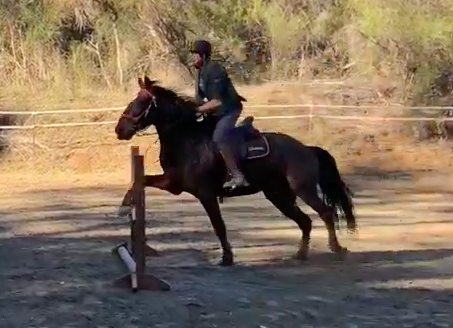 Anyway, after a few tries, they eventually figured out the whole slicing thing.

such a good pony

We event got the second jump back up to a vertical, but I don’t have a video of that round. The nice thing about this exercise is that you can combine the slicing with the lines and circle left and right to make new combinations. Once the got the slicing done a few times, we decided to end on a better note by finishing with the 2 stride line. I raised the second jump to a 2’6 oxer and Eugene came around and was like where the f*ck did that come from: 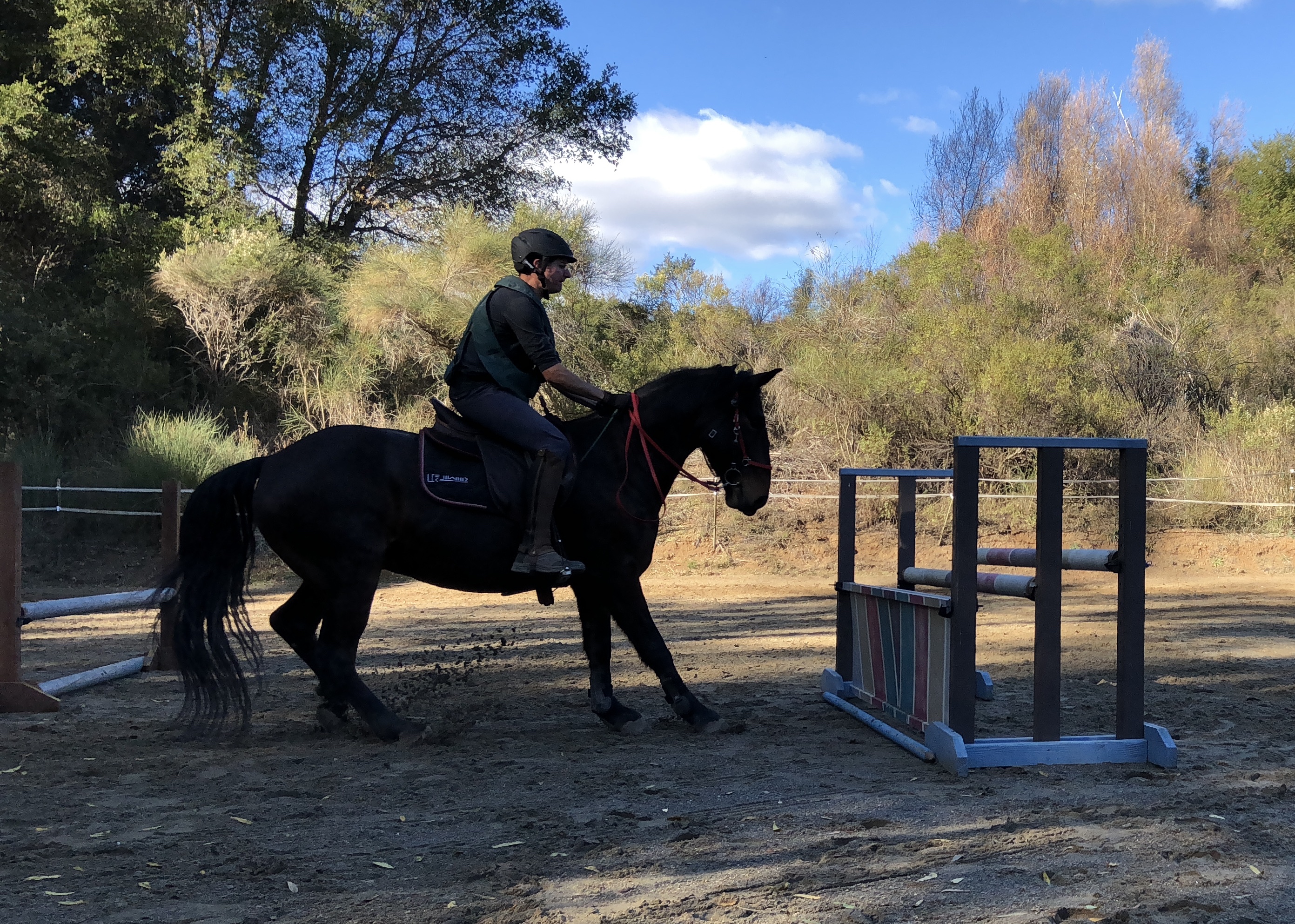 But, like I mentioned, little Mustang doesn’t really know how to refuse, so he just awkwardly hurled himself over from a stand still completely leaving my husband behind. 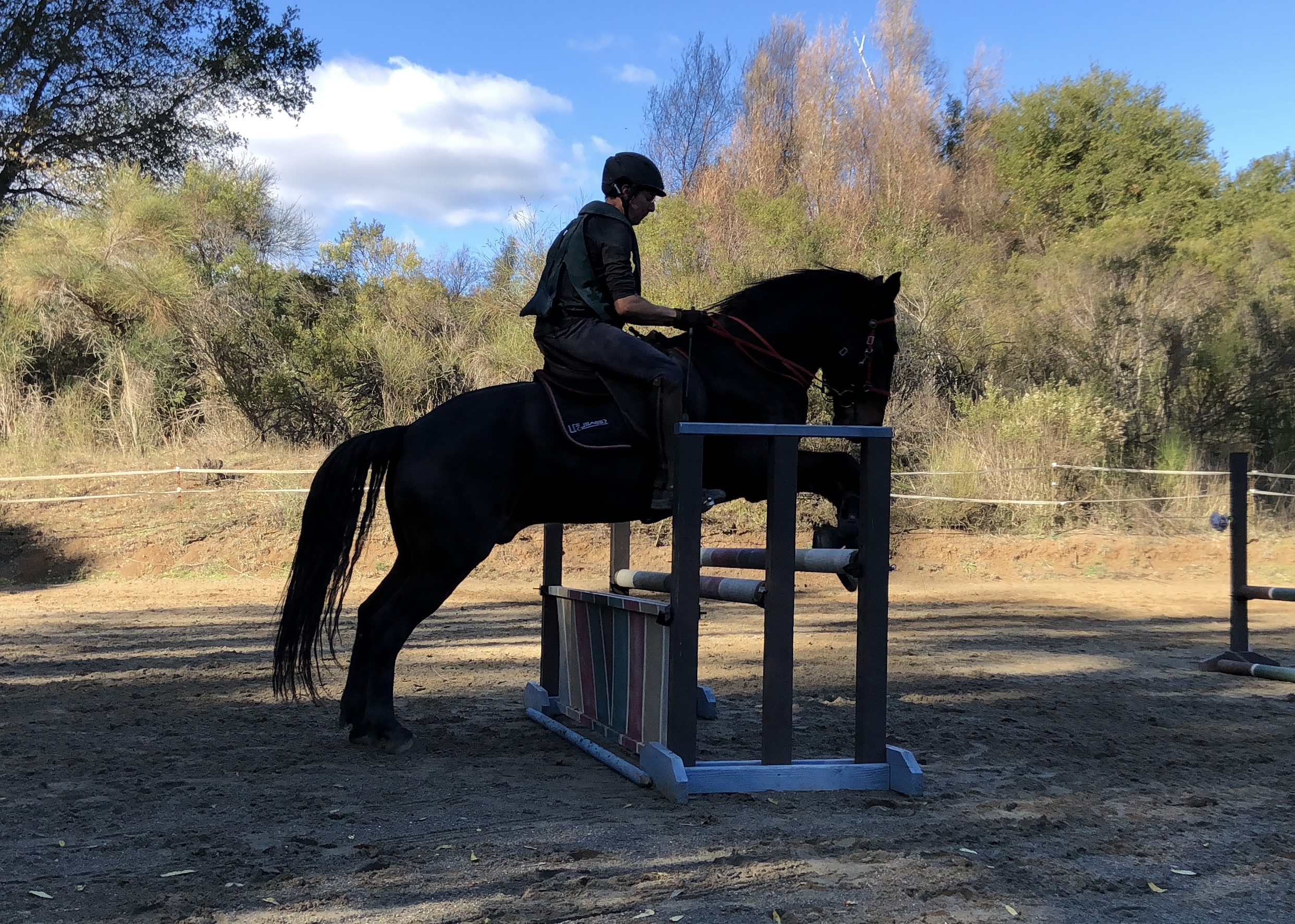 They got it on the next pass so I raised it to 2’9″ and they nailed that too, but I failed to get a picture due to technical difficulties. So I told them to do it again. And then I raised it to 3′. 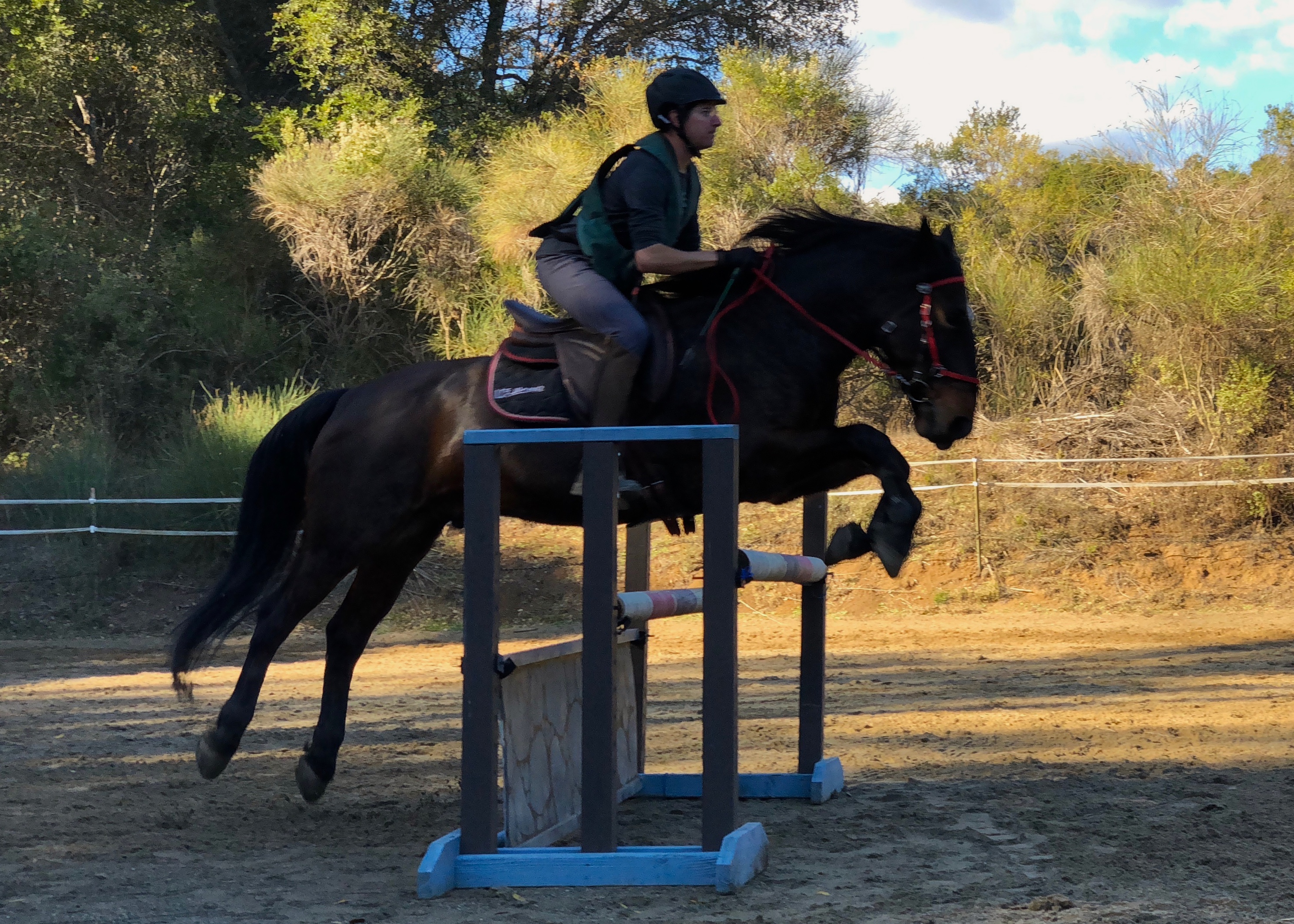 He’s so freaking good. I know 3′ isn’t a big deal to a lot of people, but it’s a pretty big deal to this little Mustang. He’s not naturally talented at jumping, but he loves it and he tries so hard. And at just barely over 15hh, 3′ is pretty big for him. 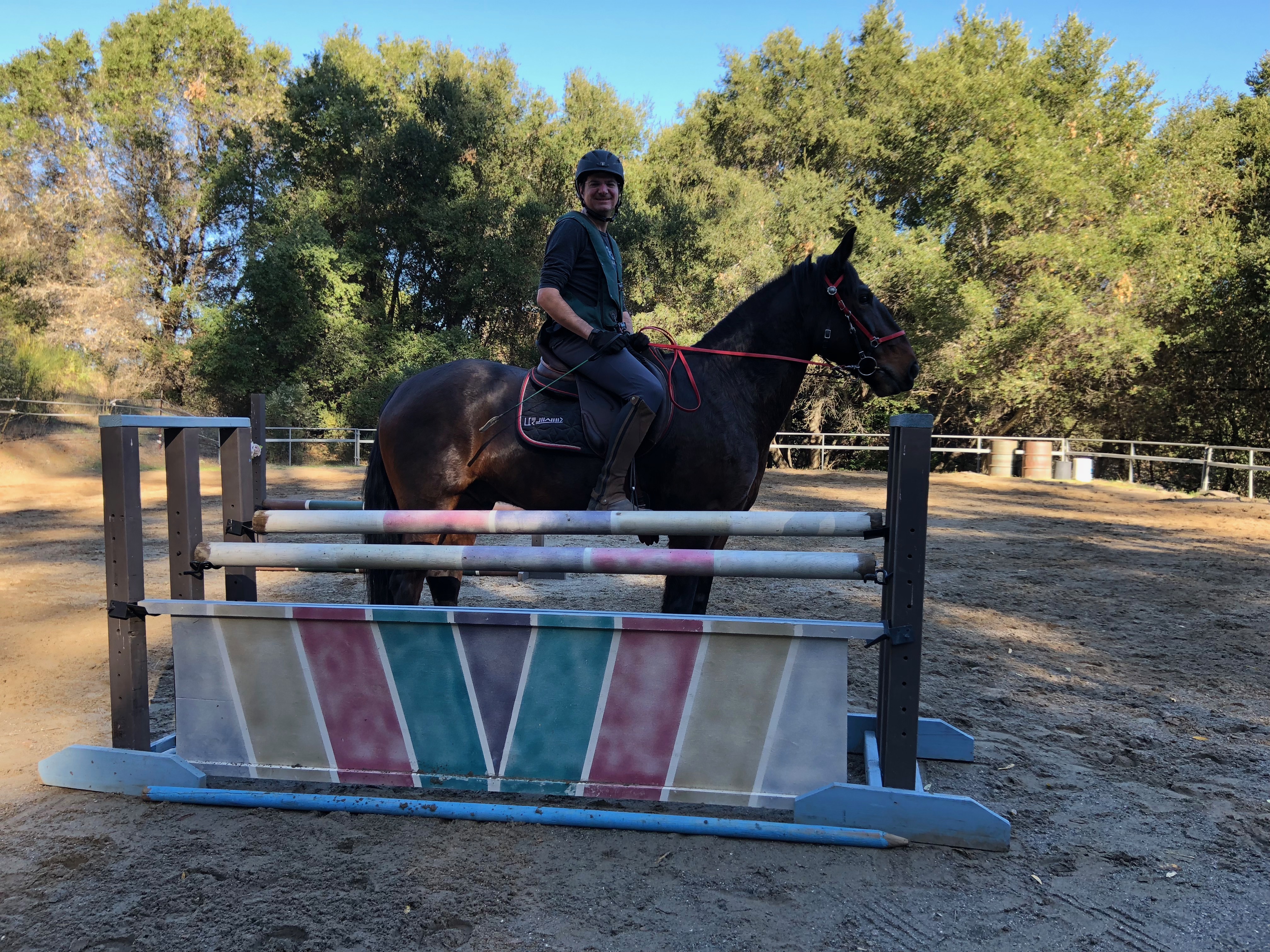 31 thoughts on “Jump Practice with Eugene”